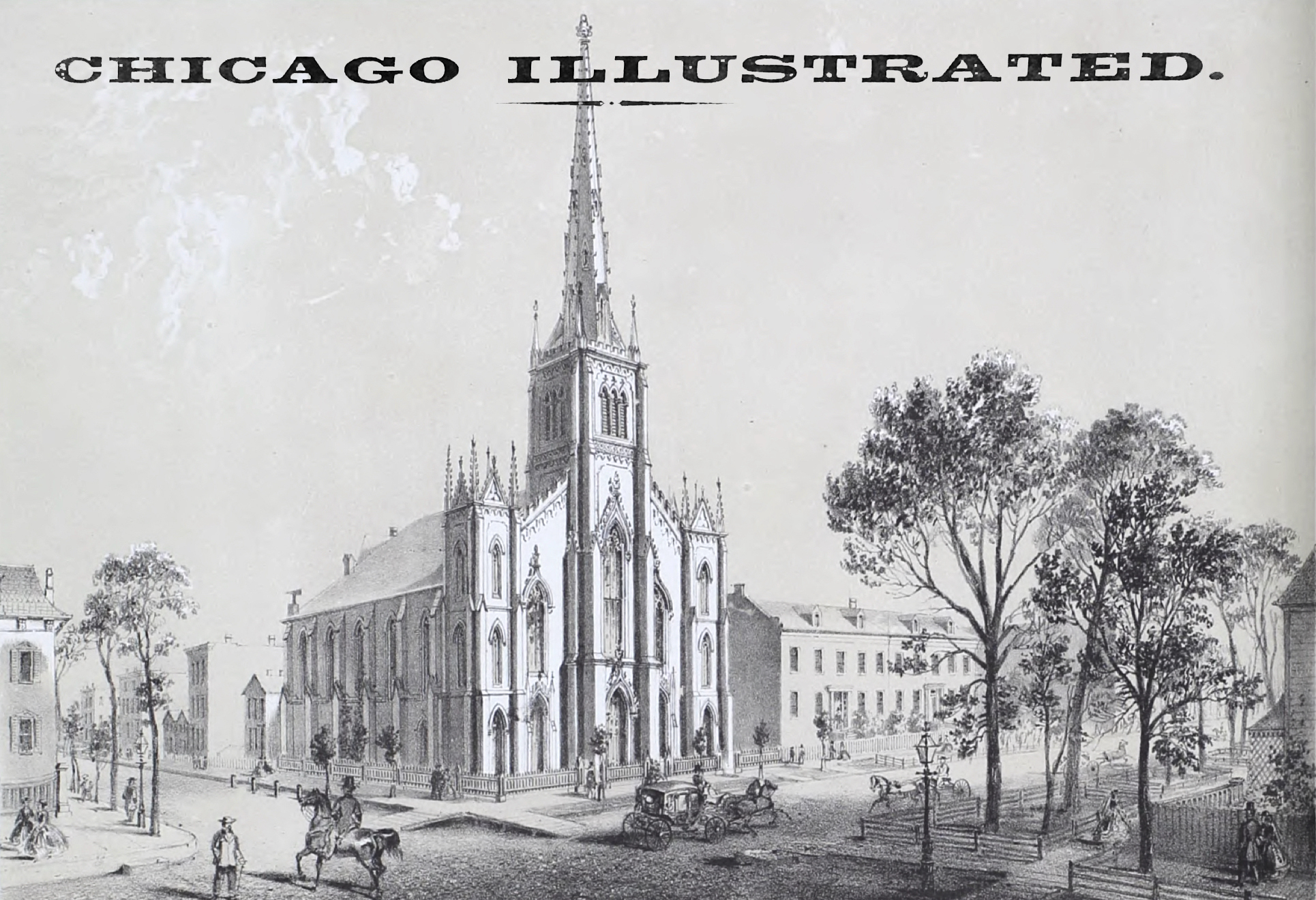 SAINT Paul’s Church, in which worship the congregation of the First Universalist Society of Chicago, is located at the north-west corner of Wabash Avenue and Van Buren street. It is built of stone, and possesses more than ordinary architectural beauty. The dimensions are 70 feet front by a depth of 108 feet, including the projectures of the towers, turrets and buttresses. The style is Gothic, with lancet headed windows and doors. The front of the building is very graceful. The tower and spire are in the centre, an reach to a beautiful height of 175 feet. There is a turret on the north and south side of the front. There are three entrance doors in front, all opening into a spacious vestibule. The exterior walls are composed of stone, rock faced; the spire and the pinnacles are of wood. The main auditorium is on the second floor, which is reached by flights of stairs leading from the vestibule. This room is fifty-eight by seventy-five feet, with galleries, and affords comfortable seating for eight hundred persons. The height is twenty-eight feet, with a vaulted ceiling forty-three feet in the centre. This ceiling is handsomely divided into panels. The ribs, purlins, pendants, corbels and brackets, are all finished in the finest style of art, and indicate great taste and skill in the designer as well as the workmen. The pulpit is erected in an octagonal recess, in the west end of the building. The organ is an excellent one, and is in the front part of the building; it was built by Mr. Erbon. The pulpit, pews and choir gallery, are all built of solid oak, and are finely finished in the most substantial manner. The first story, which is ten feet high in the clear, is elegantly fitted up and most admirably arranged for various purposes. There is a large Lecture and Sunday-School room; there are several parlors, and a convenient and comfortable study and library room for the pastor; this latter has a communication by a stairway with the main audience room upstairs. These several rooms are all handsomely and appropriately finished and furnished.

To W. W. Boyington, Esq., of Chicago, the architect, the society and the public generally are indebted for the rare taste which has succeeded in combining so much beauty and utility as mark the construction of this edifice.

The congregation is a wealthy one, nearly all its members being men of substance. The society was organized on the 11th of June, 1836, just thirty years ago, by a small number of persons consisting of N. H. Boiles, E. E. Hunter, A. A. Marble, Chester Tupper, S. G. Trowbridge and A. C. Bennett. The society thus organized, had their religious service for a number of years at Mechanics’ Hall, in the old saloon building, south-east corner of Lake and Clark street.

The first church was dedicated October 23, 1844, and was located on Washington street. In January of the year preceding, the Reverend Wm. E. Manley, accepted a call and remained in charge until late in 1845, when he was succeeded by the Reverend Samuel P. Skinner. He was in turn succeeded by the Reverend Samuel B. Mason, in January, 1853. During the gentleman’s pastorage, the congregation which had now grown in numbers and in wealth, decided to have a new church, and the present St. Pul’s was the result of their deliberation. The building committee consisted of R. K. Swift, Henry Vreeland, R. F. Walker, Jacob Gage, S. P. Skinner, H. H. Husted, P. B. Ring and M. D. Gilman. The first board of trustees were M. D. Gilman, H. H. Husted and E. G. Hall. The trustees for the present year are O. L. Wheelock, Wm. H. Arnold and George W. Gage.

In October, 1855, the Reverend W. H. King succeeded Mr. Mason as pastor, and on the occurrence of vacancy in 1859, Dr. Ryder, the present pastor, was called, and entered upon his duties in January, 1860.

The society has always been a harmonious one, and from time to time as the city has increased in population, and extended its area, other Universalist churches have been built and societies formed, without however breaking of disturbing the unity of St. Paul’s. Ex-Mayor John C. Haines, and Ex-Mayor F. C. Sherman, both old citizens of Chicago, have been and still are members of the congregation. The Reverend Dr. Ryder is one of the most generally known, and at the same time popular clergymen in Chicago. He is a man of unbounded charity in his views, a ripe scholar, and a polished rhetorician. The earnestness and dignity with which he discharges the duties of his office, have that naturalness that never fails to give these qualities the force that should always be the result of them. His personal property is not limited to the members of his own religious society, it is as extensive as is his acquaintance, and thousands who have never seen or heard Dr. Ryder, have learned to admire and esteem him for his professional and official virtues. When called to St. Paul’s, he was pastor of the Universalist Church at Roxbury, Massachusetts, here he had been since 1850. Previous to that time, he had spent several years in Europe, and in the far east. At Berlin he remained long enough to acquire a knowledge of the German, and profit under the lectures and teachings of Neander and other philosophers and scholars. He is yet a young man, and in his own church ranks among the highest of the clergy.