To Be Built at Sheboygan.—Messrs. Tyson A. Robinson’s new tug is to be built at Sheboygan, by John Gregory. The contract calls for a vessel 150 feet in length over all, 24 feet beam, and 12½ feet hold, with upper works enclosed, and sleeping apartments back of the pilot-house on the promenade deck, The price to be paid for her is $13,000.

Business Prosperity.—A marked instance of success in particular line of business is seen in that achieved by Messrs. Tyson & Robinson, two Milwaukee men, who are operating in the manufacture and. sale of lumber, with three large mills at Manistee, Michigan, shipping their products to this city and Chicago. Such is the amount of lumber turned out in a day, that the ordinary method of shipping by chartered schooners has been proved inadequate to keep the mill yards clear and the company have built four barges to take tbe lumber away to tow these they have built the mammoth tug Bismarck, which lately made ita trial trip, and so thoroughly proved itself what is was intended to be, the most powerful, the largest and most reliable, as mell as the most elegantly modeled and adorned tug that ever graced the waters of the great lakes. The princely hospitality extended by Mr. Tyson to the invited guests who attended the trial trip, showed him to be a gentleman of large heart, and an acquaintance with his partner, Geo. W Robinson, of Manistee,-and. the agreeable. recollections in the mind of the writer, of courtesies extended by each of these gentlemen, makes patent the fact the fortune installed on the right men this time. May this giant tog ever float securely, in storm and calm, and repay ten fold the commendable enterprise which has placed her in service.

NEW TUG.—The splendid new tug, Bismarck, of which so much has been said, arrived in car harbor on yesterday, having in tow thew barge D. L. Filer (U.S. 35311), freighted with 350,000 feet of lumber from Manistee. The Bismark was built at Sheboygan by the well-known shipbuilder John Gregory, and was launched last month. She is the property of Messrs. Tyson & Robinson, of Manistee, who intend to employ her to wing their barges—the D. L. Filer, Emma, E. Tyson, and Ewa L. Robinson—blew in this port and Manistee. The following figures show her dimensions:

The Bismark can also be employed in the passenger trade, accommodating in the neighborhood of seventy passengers. She has a fine low-pressure oscillating engine, 43×36 inches. The Bismark is commanded by Von Bi-mark David Cochrane, a navigator of large experience. Bon voyage.

Tug Bismarck.-This splendid craft made a trial trip last. Wednesday from Milwaukee to this port. She is probably the largest tug on the lakes, being 151 feet over all, 24 feet beam and 12 feet hold, with an engine of 172 horse power. She is designed for towing barges from the mills of her owners—Messrs. Tyson & Robinson-in Manistee. Her officers are D. Cochrane, one of uour jolly, always happy sailors, captain; Niel Chatterson, first mate; Andrew Lanigan, first engineer. She was built by Thayer, of Sheboygan, and the work superintended by Mr. Gregory. Her attachments are all of the most modern and improved styles, and make her one of the most convenient and handsome boats afloat. As we are about going to press we are denied the pleasure of giving as thorough a description of her as we would like. Among the excursionists were Messrs. Tyson, Ludington, Durand, (brother of Mr. I. S. Durand, of Racine,) Deuster, Bleyer, assistant editor Daily Wisconsin, Chappell, correspondent Daily News, Thayer, and many others.

A Sheboygan, Wisconsin newspaper reported that the launch of a new 140 foot tug named the Bismarck was so significant that the city declared the day an official holiday. It was built by John Gregory and Alfred Stokes in 1871 for Mark J. Tyson of Milwaukee and George W. Robinson of Mainstee, Michigan. The Bismark (US No. 2767) was one of the largest tugs to sail the Great Lakes. The tug was originally 285 gross tons and her dimensions were 147 feet long, a beam of 24 feet and 12 feet depth. It was renamed Justice Field in 1884, Traveller (Canada No. 111930) in fall of 1889 or the spring of 1890 and finally to G.R. Gray in 1921.

The G.R. Gray was last listed in Lloyd’s Register in 1959, however the tug was last operated in 1943, then laid up at Sault Ste Marie, Ontario, until 1947, when she was removed to Thessalon, Ontario and abandoned at a boneyard.

One of the historic tugs like the Sampson is the tug G. R. Gray, which fine craft is shown with a big tow of pulp wood logs. She plies between the lower Soo River and Saulte Ste. Marie, Ontario. She was formerly the renowned Traveller. 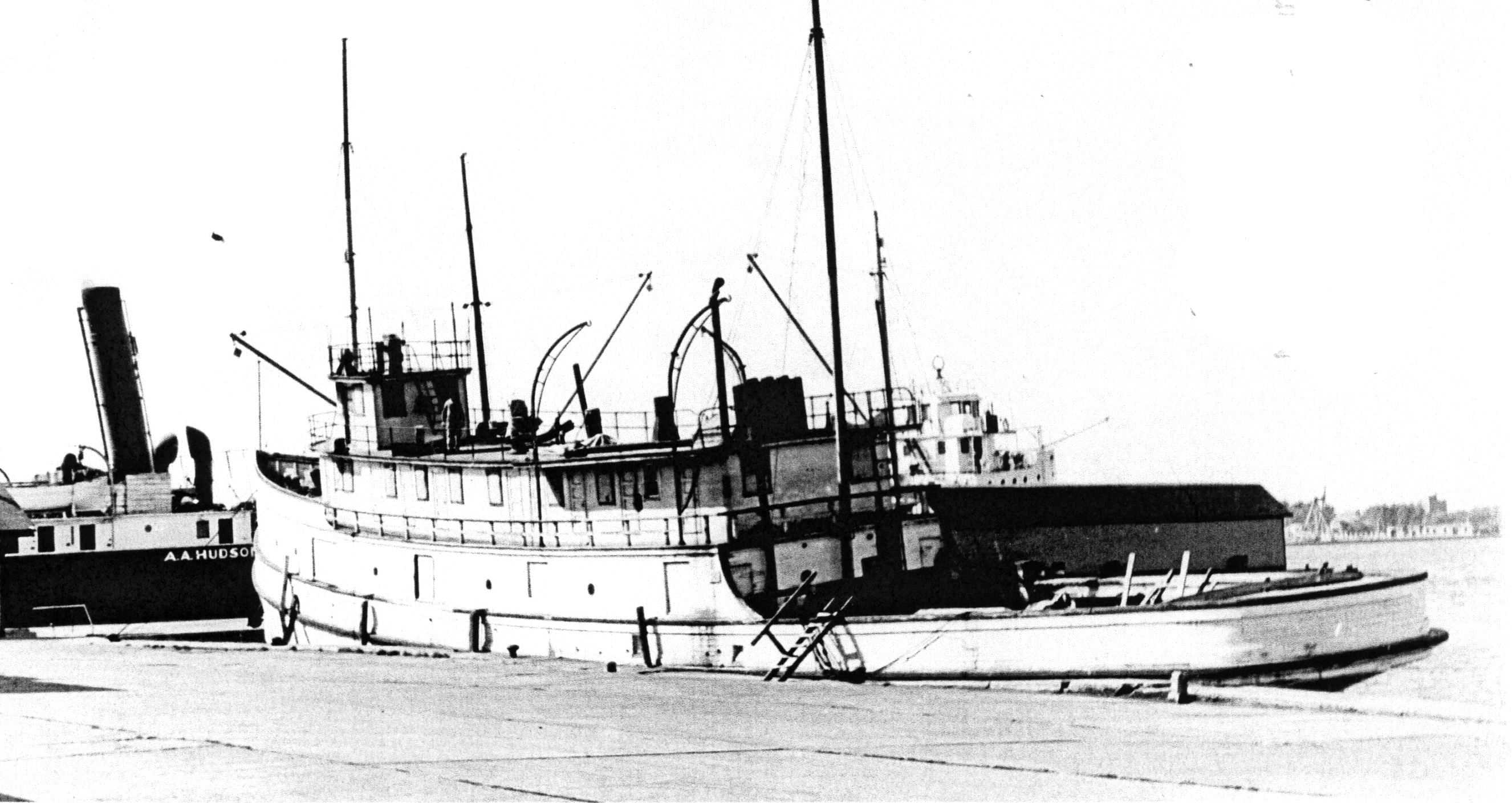 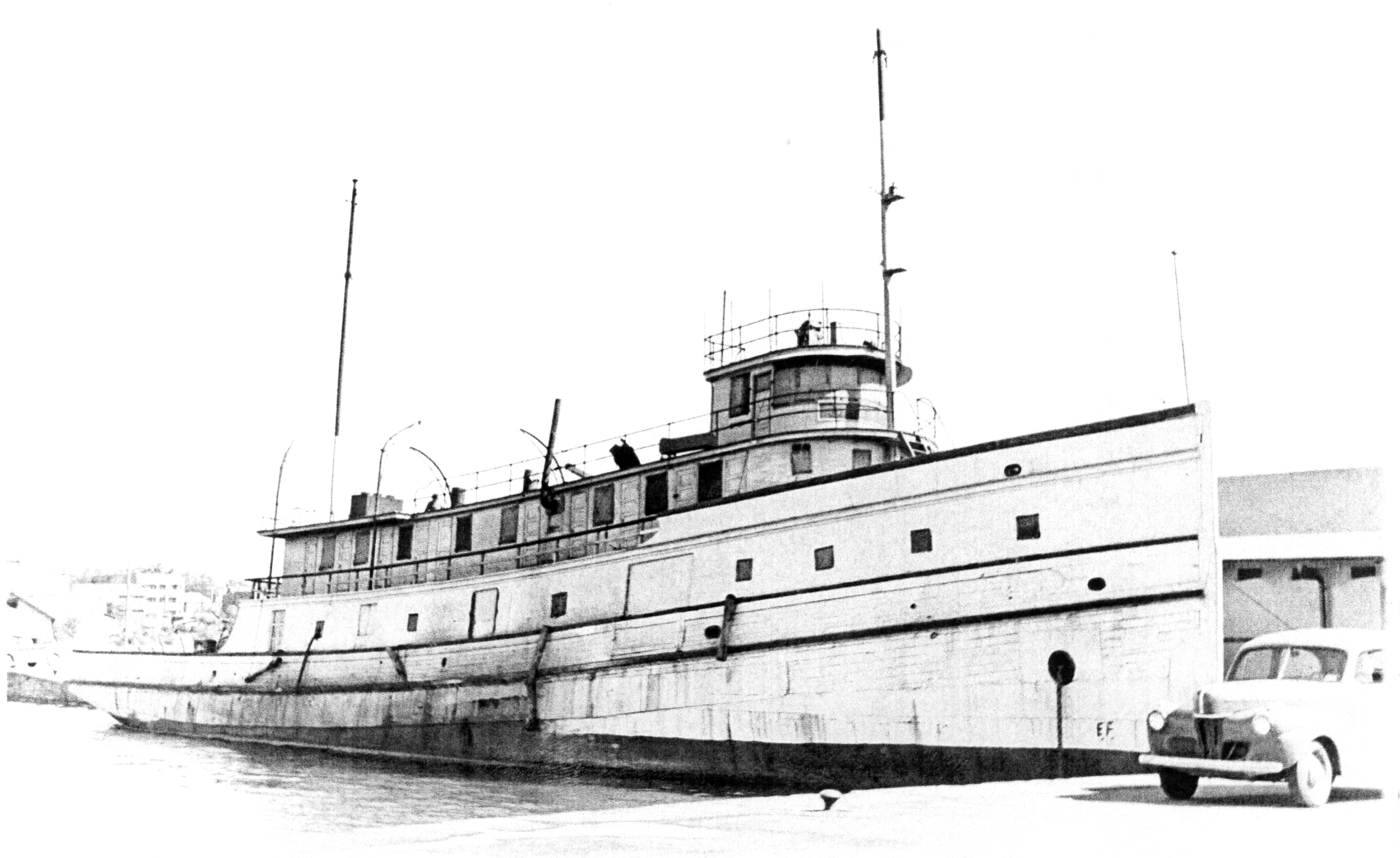