OUR BRIDGES.—There is more trouble than usual among the bridges this spring; it would really seem as if the very awkward weather has worked in a disintegrating way upon those structures and thrown them out of repair. Randolph street bridge (#4) is rotten, as everybody knows, and is partially demolished, the road bed being almost entirely removed yesterday. Now Clark street bridge (#4) is found to be rotting fast, the worms have got into it and are playing sad havoc. It has been out of repair three or four times this spring already and may soon be condemned. Polk street bridge (#2), the poor old rackety thing, is soon to go the way of all floating nuisances. Yesterday the bridge over the river at Madison street was found to be shaky, and the chances are that the rails laid along Market street will be of little use, as the tide of travel will probably have to be entirely diverted to Lake street before the Randolph street bridge (#5) is completed. To use a homely, but expressive phrase, “We are in a pretty pickle.” Fully one-half the bridges in the city are in a bad way, liable to break down at a moment’s notice, when the tide of travel is such as to give a constant stream overall. We really want more bridges. There is such a community of feeling between the denizens of the three divisions of the city that they cannot refrain from a constant interchange of visits. The interminable array of one, two, and four wheeled vehicles which belong to our city seem, at times for hours together, to have nothing else to do but to cross the bridges, while every team that comes in from the country finds also a bridge to cross before it gets to its destination. Of course, when there least opportunity there is most to be done. When we have no accommodations there are always more to be accommodated than at any other time. We may be speaking on a tense subject, but there is no use in shutting our eyes to the fact that we may as well swing in the information that our Mayor will have to hove-in revers! bridges before his term of office expires.

The Randolph street bridge is finished, except for painting, and in use. The bridge at Madison street, which has has to do extra duty during the last few weeks, is in a very rickety condition. It became temporarily disabled yesterday morning, immediately on the completion of its neighbor, and probably will have to be renewed before long. 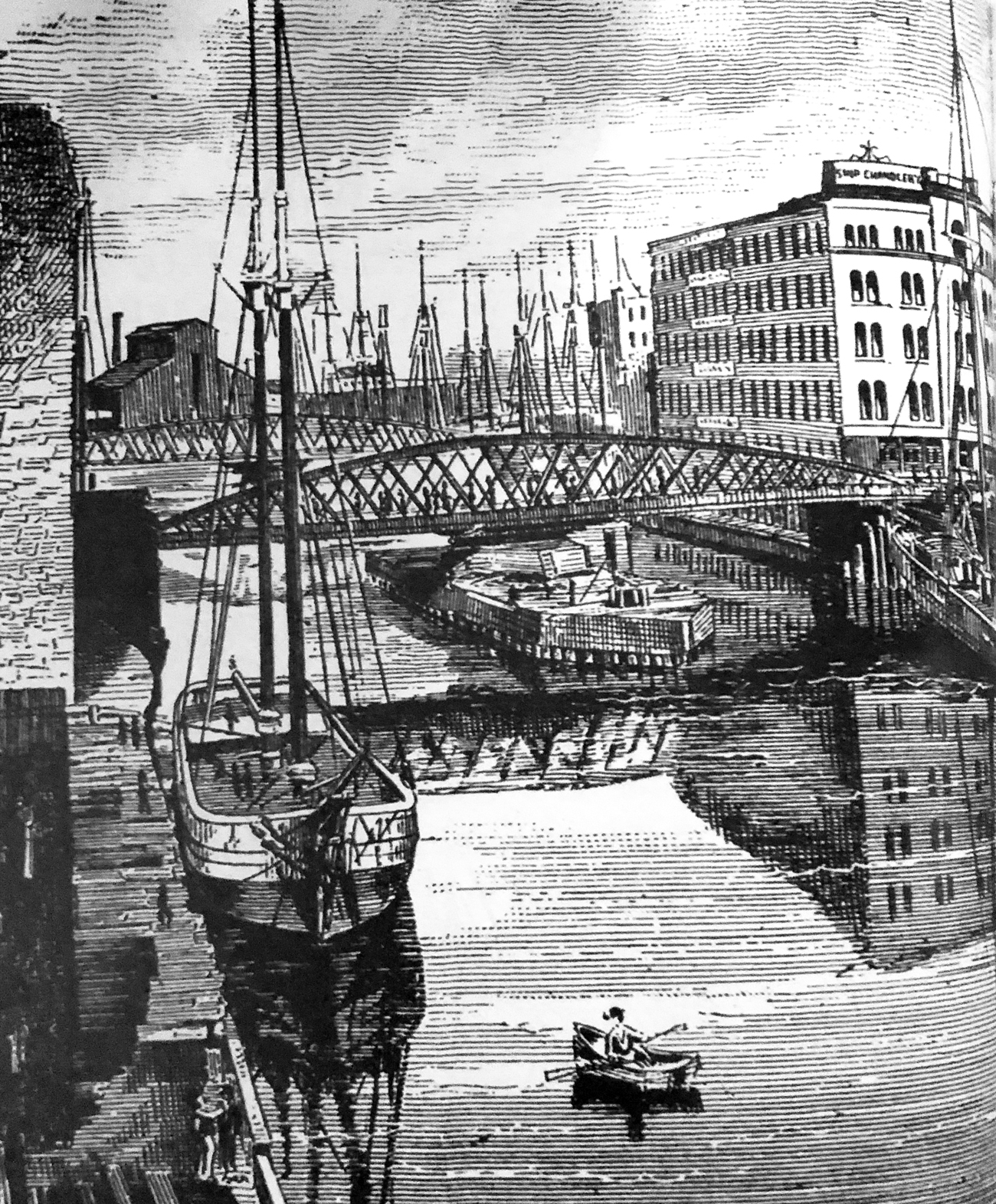 Justice Rendered:
To the Editor of The Chic ago Tribune:
The undersigned deem it their duty, as well as an act of justice to the Richards’ Iron Works, to place on record the important service rendered by their new steam fire engine, during the late conflagration. This steamer prevented the spread of the fire to the West Side of the river, between Madison and Randolph streets, and, by means of hose laid across the river, delayed the progress of the fire at Rhodes & Bradley’s coal yard until the steam could be moved to Hathaway’s Dock. To this steamer, and the courageous men in charge, belongs exclusively the credit of saving the Randolph street bridge and its eastern approaches when seriously menaced by the sweeping flames from the wood and coal yards. It is, perhaps, needless to add that had Randolph street bridge been destroyed, Lind’s Block, Lake street bridge, and a large portion of the West Side would have scarcely escaped a like calamity. We also take pleasure in mentioning the gallant engineers William Hewitt and Waldo Hill, who stood nobly to their post until the public and private property which they had undertaken to protect was free from danger. 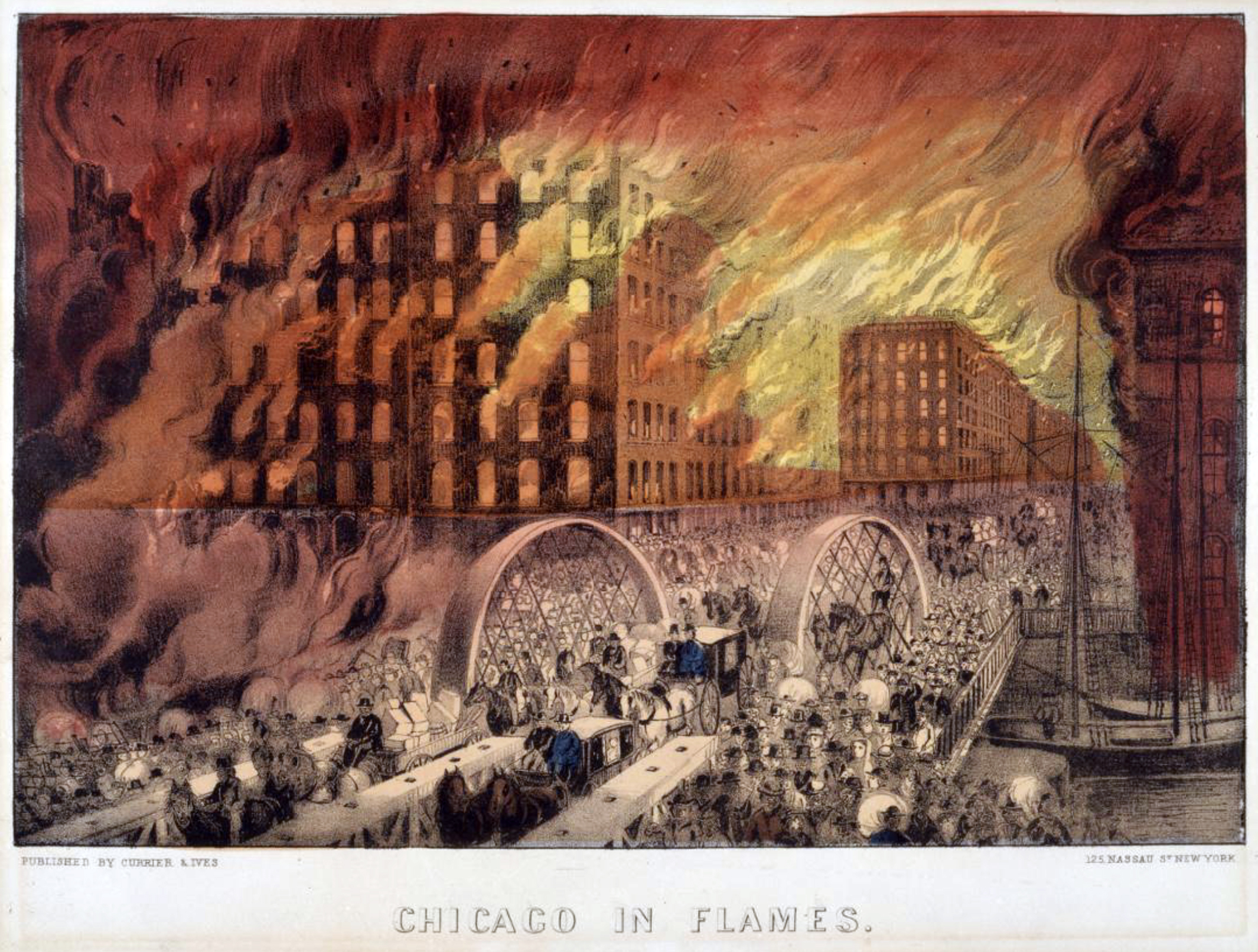 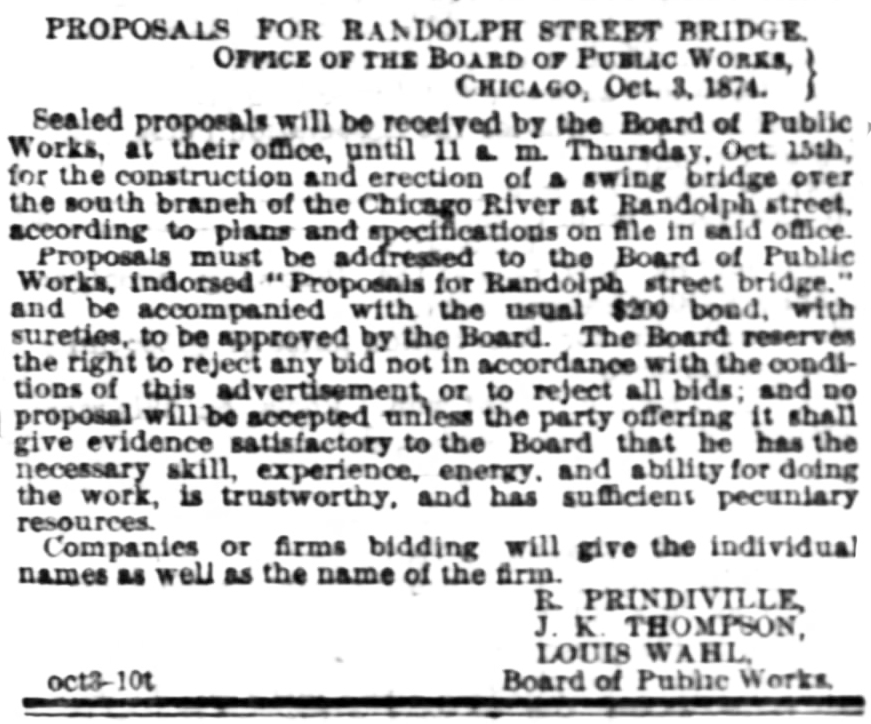 The Randolph street bridge, work on which has been going on for some time, was nearly completed last night, and the street-cars will begin running over it regularly to-morrow morning. The bridge was rebuilt by the Keystone Bridge Company, of Pittsburgh, under the superintendence of Mr. William Baird; it is apparently a solid, well-built structure, and its completion will be a source of great convenience to West-Siders. The street railway compny has decided to continue the cheap rate of fare which was adapted once before; namely 8 cents for the through trip from State street to Western avenue—sleeping berths not included.

The new Randolph street bridge will probably be swung into position to-day. When it is opened for traffic the street cars on Randolph street and Milwaukee avenue will run every three minutes, and at three cents the trip instead of five.

The new wrought-iron bridge over Randolph street crossing of the river was yesterday thrown open to public travel. It was built by the Keystone Bridge Company, of Pittsburgh, after the design of S. G. Artingstall, of the Board of Public Works. The builders commenced work by taking down the old frame bridge Feb. 12, consequently the new one has occupied just twenty-six working days in its construction. In it there are 135,000 pounds of wrought iron, 48,000 feet of lumber, the whole costing $10,850. The work on the abutments and on the centre pier was extra, and was done by the Board of Public Works. 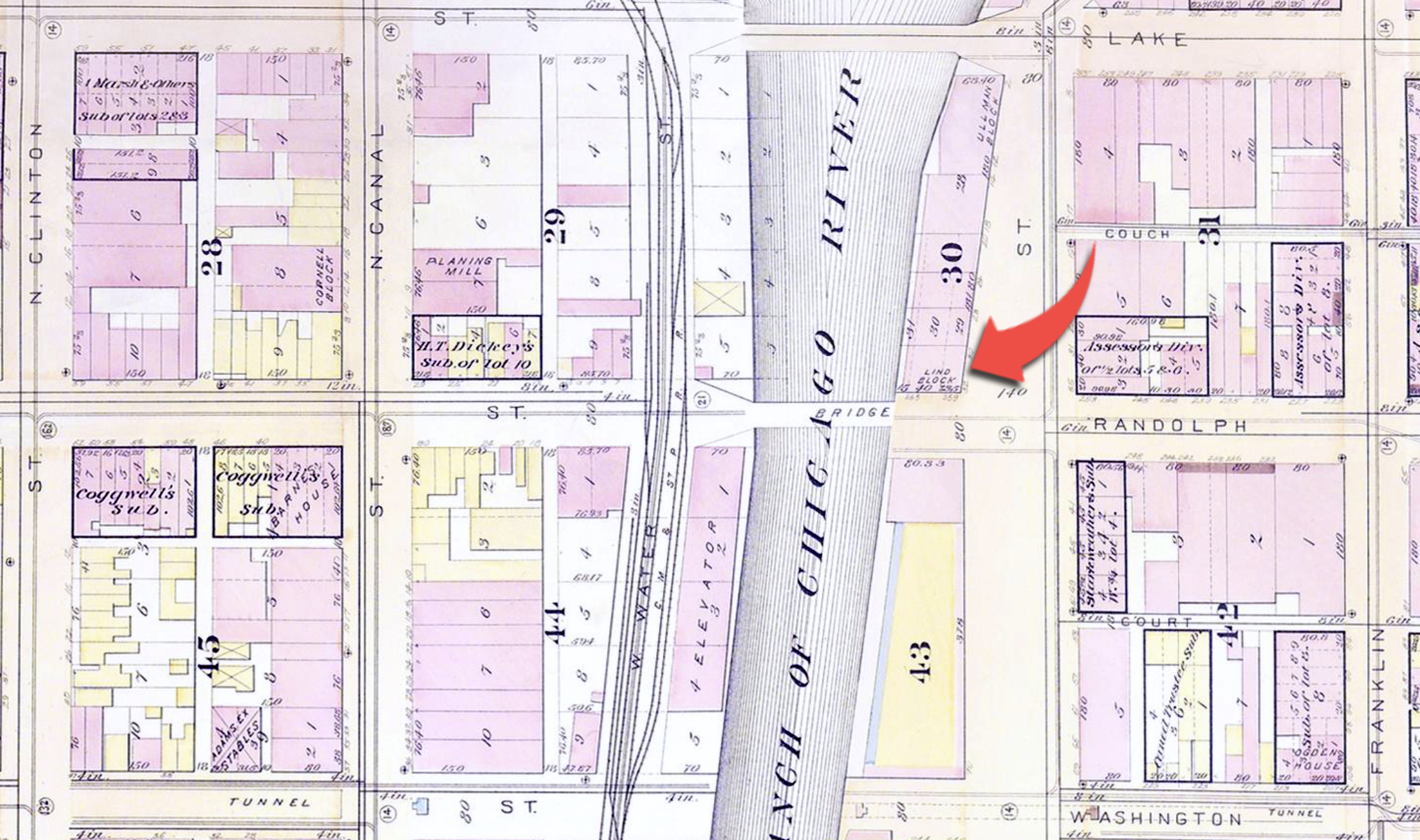 The poor service give to the public by bridge contractors is strikingly shown by the slow work done on the Randolph street bridge. The work of building a new Randolph street bridge has been going on for nearly a year and the frame of one side has been set up, while the American Bridge company has done almost nothing all at on the west bank. The foundation piers, which are being put in by the Jackson & Corbett company, were made the opportunity for an experiment with a new system of sheet piling for coffer dam work, and the work was done slowly, as the company preferred to limit its expenditure, while making the trial. 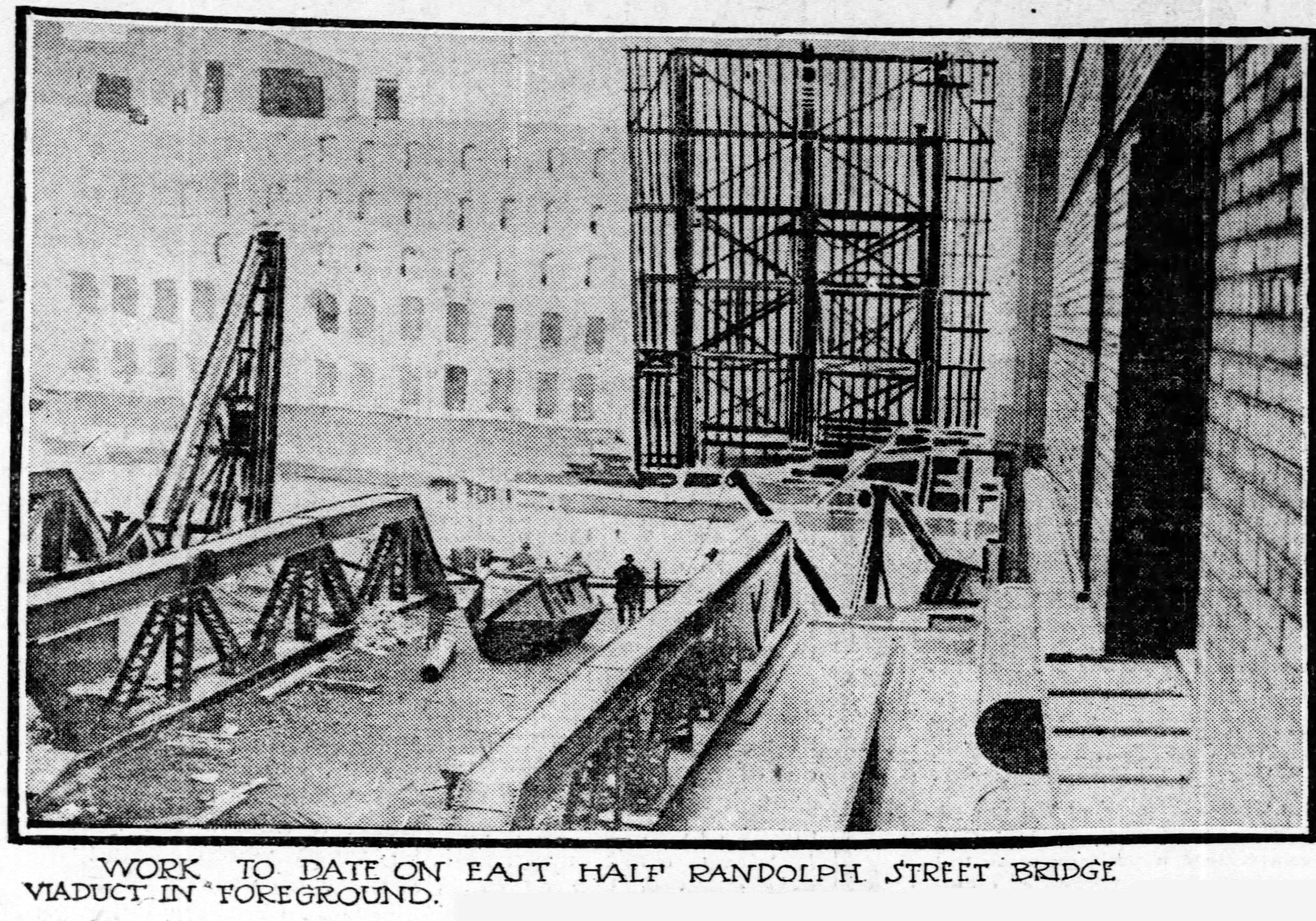 The difference between public work and private contract is shown by the rapid construction of the Butler Bros. building just west of the bridge. This building is thirteen stories high, and, on account of its being a warehouse, contains an unusually large amount of steel. It was put up by the William Grace company in three months, although containing many times as much steel as the bridge and piers. The contract for the building was practically finished in its interior by Nov. 15. The Grace company had made no preparations for the contract and was forced to buy its steel in the open market. It purchased from the steel trust, of which the bridge trust is a component part, and so the excuse made by the bridge trust that scarcity of steel delayed its operation is given little consideration.

The drainage board awarded the contract for the Randolph street bridge a year ago last July. Business men are comparing the bridge work in Chicago with the record of delays the city has suffered at the hands of the paving contractors. 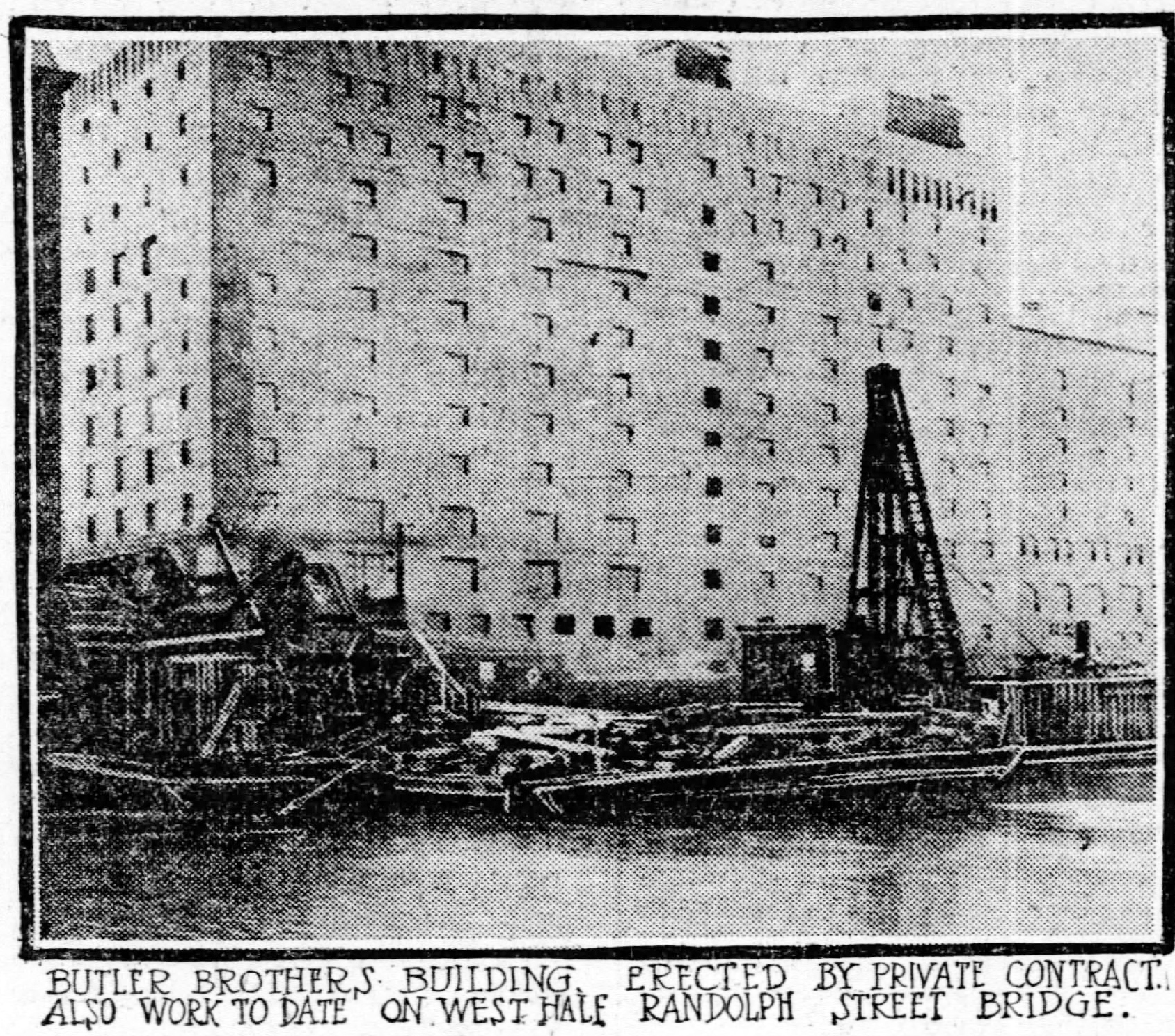 The new Randolph street bascule bridge, built by the drainage board, will be opened to traffic Tuesday. A large force of workmen is busy putting the finishing touches on the big structure.

The Randolph street bridge is one of the largest and finest structures of its kind in the West, and cost $215,000. The substructure was built by the Jackson & Corbett company and the superstructure by the American Bridge company. Work on the bridge was begun Aug. 15, 1901.

The structure is 267 feet long, 72 feet wide, and has a clear opening when raised of 140 feet. The bridge has two-twenty-two-foot roadways and two nine-foot sidewalks, and is operated by electricity. There will be no ceremonies attending the opening of the bridge to the public.

When workmen had chopped down the temporary barriers which had kept pedestrians from using the new Randolph street bridge, the structure, costing $215,000, was opened to the public at 4 o’clock yesterday afternoon.

After members of the drainage board and Chief Engineer Randolph had made a final inspection President Thomas A. Smyth declared it open for traffic.

At a signal given by Chief Engineer Randolph the huge structure was raised and lowered, while Trustee Braden held his watch and timed the operation. It took just thirty seconds to raise the bridge and twenty seconds to lower it.

It will be several days before the structure will be ready for vehicles. James Kelly, a teaming contractor, was anxious to drive the first vehicle over the bridge. He was told no vehicles would be allowed to pass over the structure for several days.

“I just bet $25 that I would be the first man over in a buggy,” explained Kelly, “and I want to win the money. Let me go over and I will be responsible for any damage.”

He was compelled to drive away without winning the bet.

The Randolph street bridge is one of the largest and finest in the west. The substructure was built by the Jackson & Corbett company. Work was begun Aug. 15, 1901. The structure is 267 feet long, 72 feet wide, and has a clear opening when raised of 140 feet. 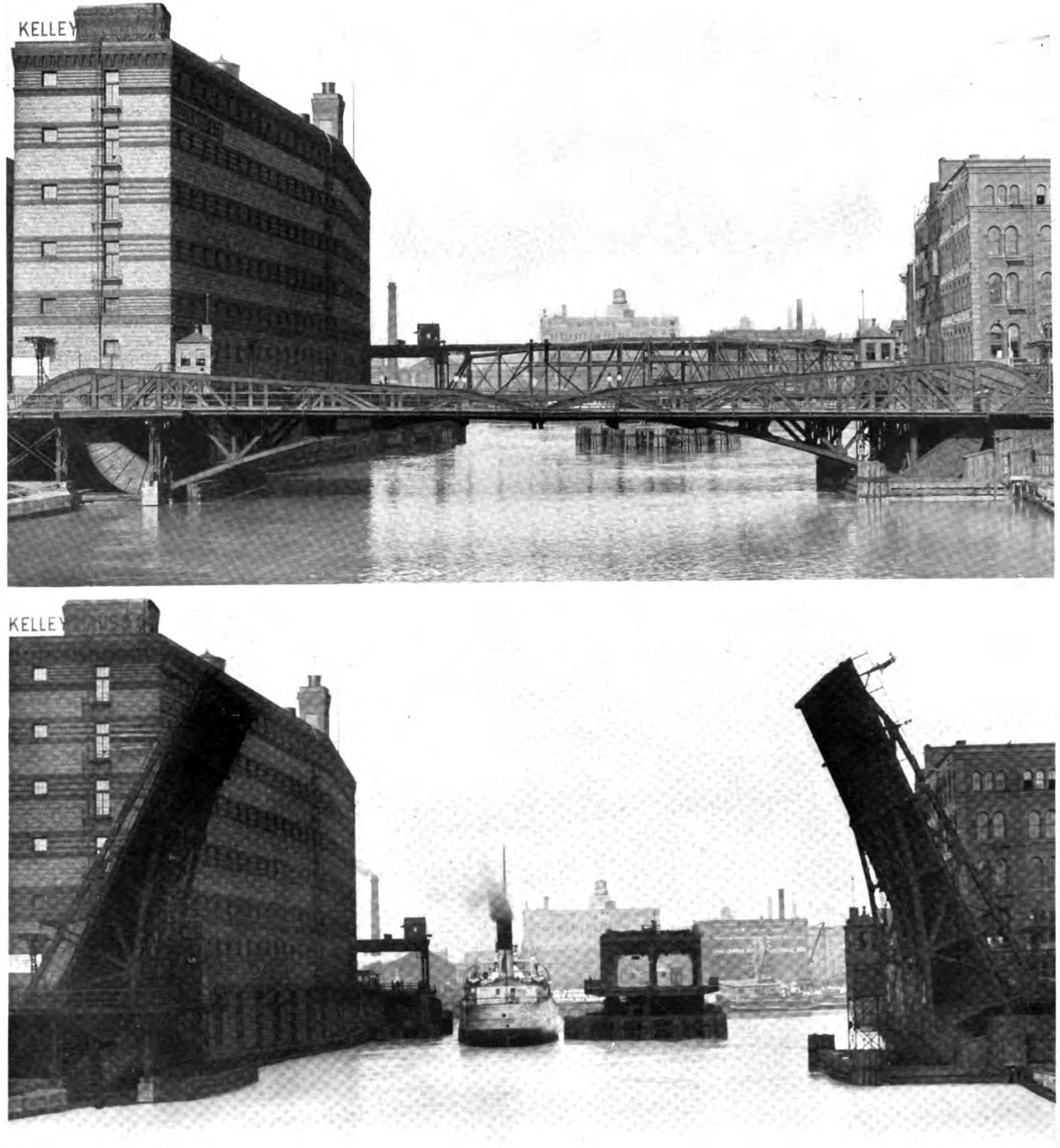 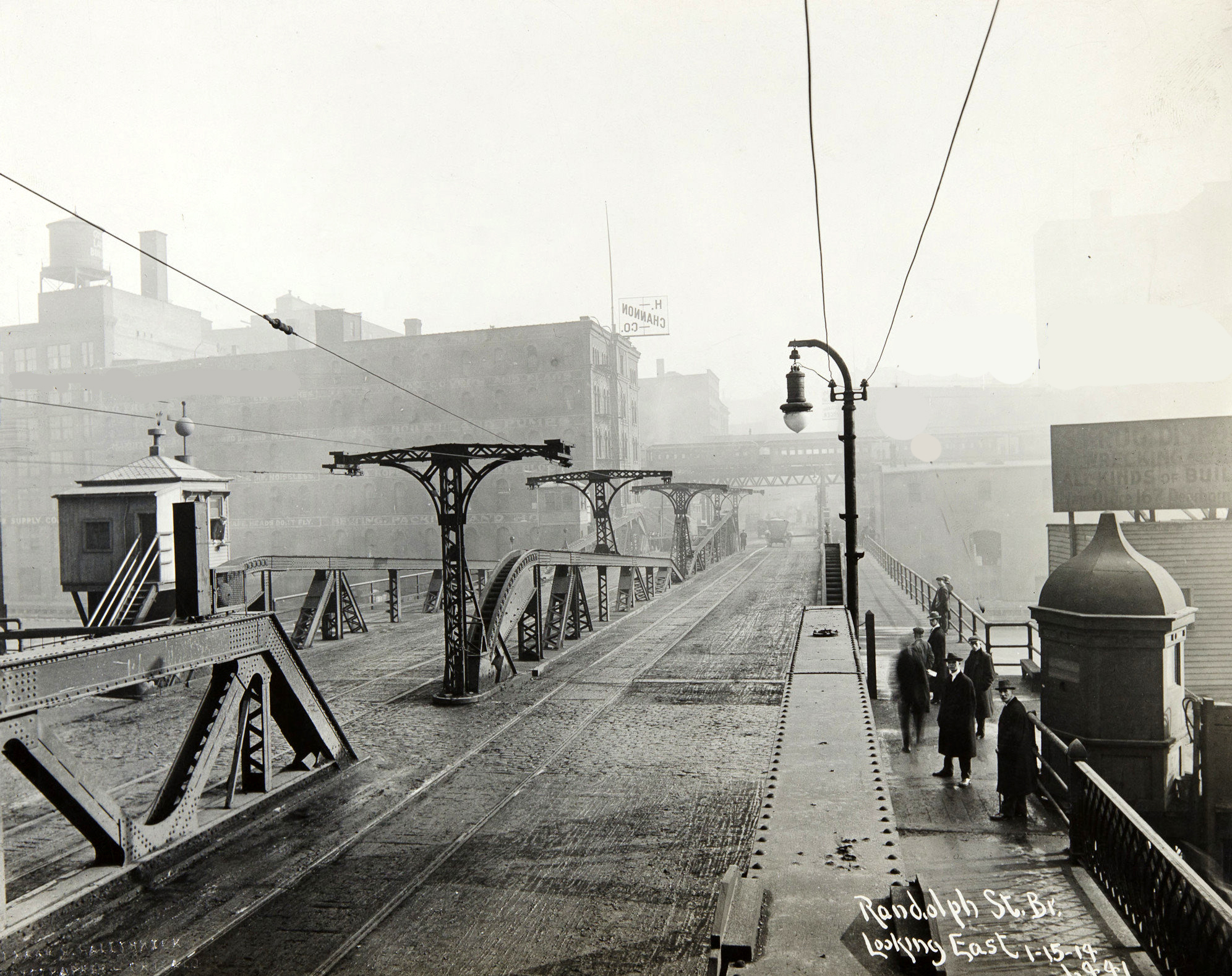 AN $18 MILLION grand opening of sorts, is planned on Randolph Street tpday when a new Chicago-style bascule bridge. three years in the making, makes its debut and re-establishes a westbound link over the southern branch of the Chicago River.

The rebuilt Randolph Street bridge, at Wacker Drive, will be opened without fanfare to evening rush·hour traffic Friday and is expected to be opened less often for river traffic.

Although less flashy nnd less imposing a project, the new bridgc look about nine months longer to build than the Sears Tower1.

FEDERAL AND STATE funds paid for the construction of thc bridge, which begun In July, 1981. The bridge, built in a style developed in Chicago, is 21 feel above the river, 5 feet higher than the old bridge was.

The extra height means the bridge will have to be opened only ubout 100 times a year to accommodate river traffic. The old briuge averaged about 1,450 openings a year.

The bridge was designed by the city’s Public Works Department and Hazelet & Erdal2, of Chicago.

NOTES:
1 Even though the Sears Tower was open for occupation in September 1973, construction wasn’t officially complete till 1974.

2 In 1922, Scherzer Rolling Lift Company’s president (Mrs. Albert Scherzer), decided to have new leadership in the company and hired a University of Illinois professor named Craig Hazelet. In 1936, he along with another staff member, Mr. Ingolf Erdal purchased the company from Mrs. Scherzer and formed the partnership of Hazelet & Erdal. On June 1, 1995, the firm became Hazelet & Erdal, A Dames & Moore Company. The Scherzer Rolling Lift Company designed the previous bridge (Randolph Street Bridge #7).