An order was offered for the removal of Clark street bridge to the crossing if the river at Polk street, provided the residents in the vicinity of the latter pay the expenses, and also pay the tender of said bridge, who shall be acceptable to the Council.

OUR BRIDGES.—There is more trouble than usual among the bridges this spring; it would really seem as if the very awkward weather has worked in a disintegrating way upon those structures and thrown them out of repair. Randolph street bridge (#4) is rotten, as everybody knows, and is partially demolished, the road bed being almost entirely removed yesterday. Now Clark street bridge (#4) is found to be rotting fast, the worms have got into it and are playing sad havoc. It has been out of repair three or four times this spring already and may soon be condemned. Polk street bridge (#2), the poor old rackety thing, is soon to go the way of all floating nuisances. Yesterday the bridge over the river at Madison street was found to be shaky, and the chances are that the rails laid along Market street will be of little use, as the tide of travel will probably have to be entirely diverted to Lake street before the Randolph street bridge (#5) is completed. To use a homely, but expressive phrase, “We are in a pretty pickle.” Fully one-half the bridges in the city are in a bad way, liable to break down at a moment’s notice, when the tide of travel is such as to give a constant stream overall. We really want more bridges. There is such a community of feeling between the denizens of the three divisions of the city that they cannot refrain from a constant interchange of visits. The interminable array of one, two, and four wheeled vehicles which belong to our city seem, at times for hours together, to have nothing else to do but to cross the bridges, while every team that comes in from the country finds also a bridge to cross before it gets to its destination. Of course, when there least opportunity there is most to be done. When we have no accommodations there are always more to be accommodated than at any other time. We may be speaking on a tense subject, but there is no use in shutting our eyes to the fact that we may as well swing in the information that our Mayor will have to hove-in revers! bridges before his term of office expires.

POLK STREET BRIDGE is not only a promising condition, which is well, but its promise will be finished, which is better still. The rebuilding of this thoroughfare made it a great improvement on its predecessor. The stone in substructure, which is on the same plan as that used for Clark street bridge, is ready for the draw, having been finished yesterday. The contract was divided in this instance, Messrs. E. Sweet, Jr., & Co. having the substructure, including the protection, for $22,000, while the King Iron Bridge Company receive $12,600 for the draw. This bridge was promised for June 1, and will probably be done on or very near contract time. 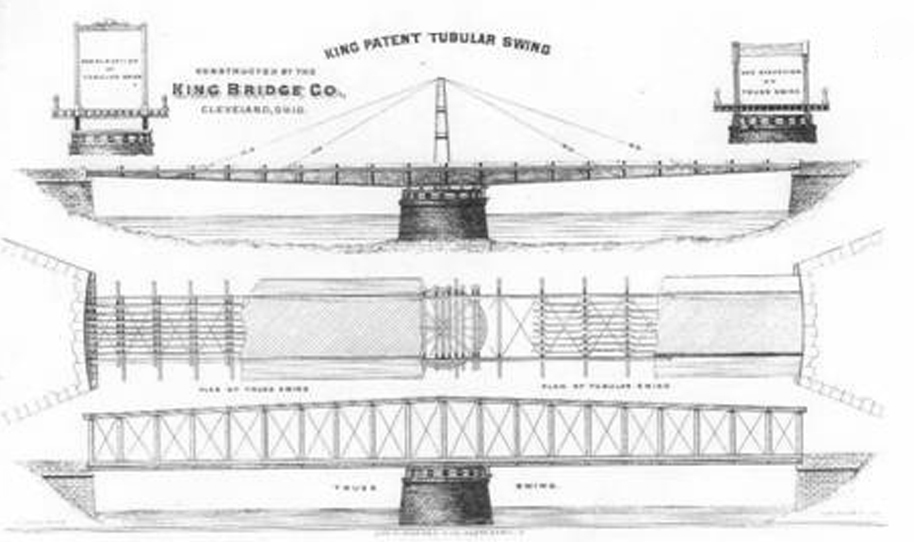 Removal of the Polk Street Bridge.
The work of removing the Polk street bridge will be commenced at 7 o’clock this morning, and the river will be closed to vessels until the job is completed. At what hour of the day that will be no one can say.

“The bridge will be raised on scows,” O. B. Green, who has the contract, said yesterday, “much the same way as was the Wells street bridge when it was sent down to Dearborn. When it is high enough to clear the centre pier it will be moved westward on the scows until the end rests on the abutments. The house-movers then take the structure and pull it on the roadway until it completely clears the channel. There it will remain until the center pier is built up the required three feet, when it will be replaced in the same way. The Wisconsin Central people are doing most of the work. I have merely furnished them the appliances. They say it will not be over two weeks before the bridge is back in its old quarters. I wish it was over now.”

The raising of the bridge is required by the viaduct which is being constructed east of the river for the accommodation of the Western Central.

Explanation for the use if the Strauss Bridge company’s design for the Polk street bridge was given by City Bridge Engineer Thomas Pihlfeldt in the morning. He said:

Further, the city’s design required the tracks of the Chicago Great Western railroad to be moved several feet and the company threatened injunction proceedings. 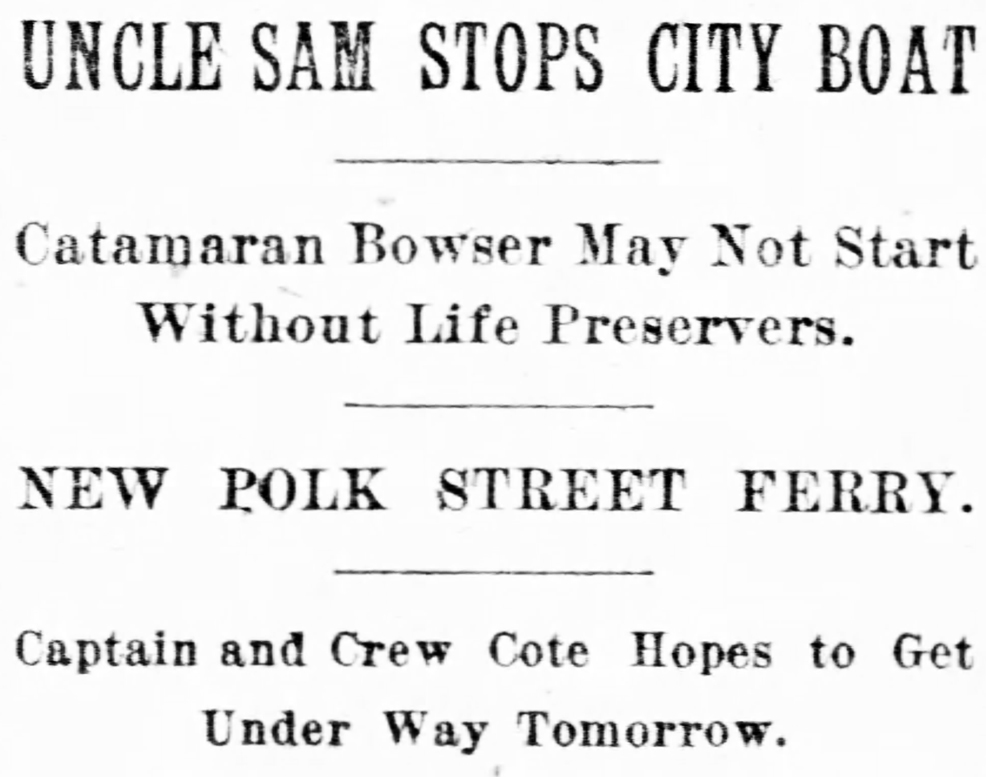 Orders from the United States government officials interfered yesterday with the maiden voyage of the good ship Bowser, flag vessel of the Chicago navy. Skipper Joseph Cote hailed Admiral Thomas G. Pihlfeldt over the city hall telephone in the morning with a message like this:

Ahoy the city hall! The government won’t let us take out the Bowser till we get a permit. We’ve got to have fifty life preservers one for every landlubber we ferry across the river.

The admiral, who also is bridge engineer, wanted to know if the “old catamaran” would be ready to act as Chicago’s first municipal ferry boat by Monday, and the skipper shouted back:

The Bowser, named after Miss Pearl Bowser, a young woman of the west side, had its engines working, and the crew, consisting of “Johnny” Rogers, was just ready to cast off the lines when word was received that any attempt to leave the Eighteenth street dock without clearance papers would be taken at Capt. Cote’s peril and he’s be likely to lose his ticket as an A. B. S., with some knowledge of navigation.

Cote’s Reputation as Brick Heaver.
Before he became a naval officer, Cote achieved quite a reputation as a heaver of bricks as a member of the education committee during the old coal teamsters’ strike several years ago, but with all his practice in gunnery he was cautious about taking any chances with the government, so he banked his fires and sent in a hurry up requisition for life preservers.

The Bowser is intended as a ferry boat at the place where the Polk street bridge will be built, and is likely to be in commission some years. It cost $1,500, and Cote says it will save the city millions of dollars in the construction of temporary bridges during the next three or four decades. It consists of two scows joined together in the graceful lines of a catamaran, only larger, with a ten horse power gasoline engine and propeller amidships, with a cushioned seat for “Johnny” aft. Besides being the crew, Rogers is chief engineer, midshipman, pilot, and has to swab up the main deck every other week.

Several hundred people were waiting on both sides of Polk street at the river to see the trial trip of the Bowser yesterday afternoon and some of them wanted to get across. Rogers came along about 4 o’clock and told them they’s have to go north to the next bridge, but had to be around bright and early Monday morning to see the christening.

Christening Tomorrow Morning.
According to plans made by Skipper Cote and Admiral Pihlfeldt this ceremony will take place at 7 o’clock tomorrow morning. A bottle of beer will be smashed over the starboard bow of the Bowser by Ald. Kenna. Ald. Bowler and Ald. Coughlin also are on the committee on arrangements. There will be more beer, but it will not be wasted.

The Bowser will ply between the east and west sides of the river every day from 6 a.m. to 7 p.m. for the next few years, or until the bridge is built, and on Sunday, it will be used as an excursion boat by the city aldermen. 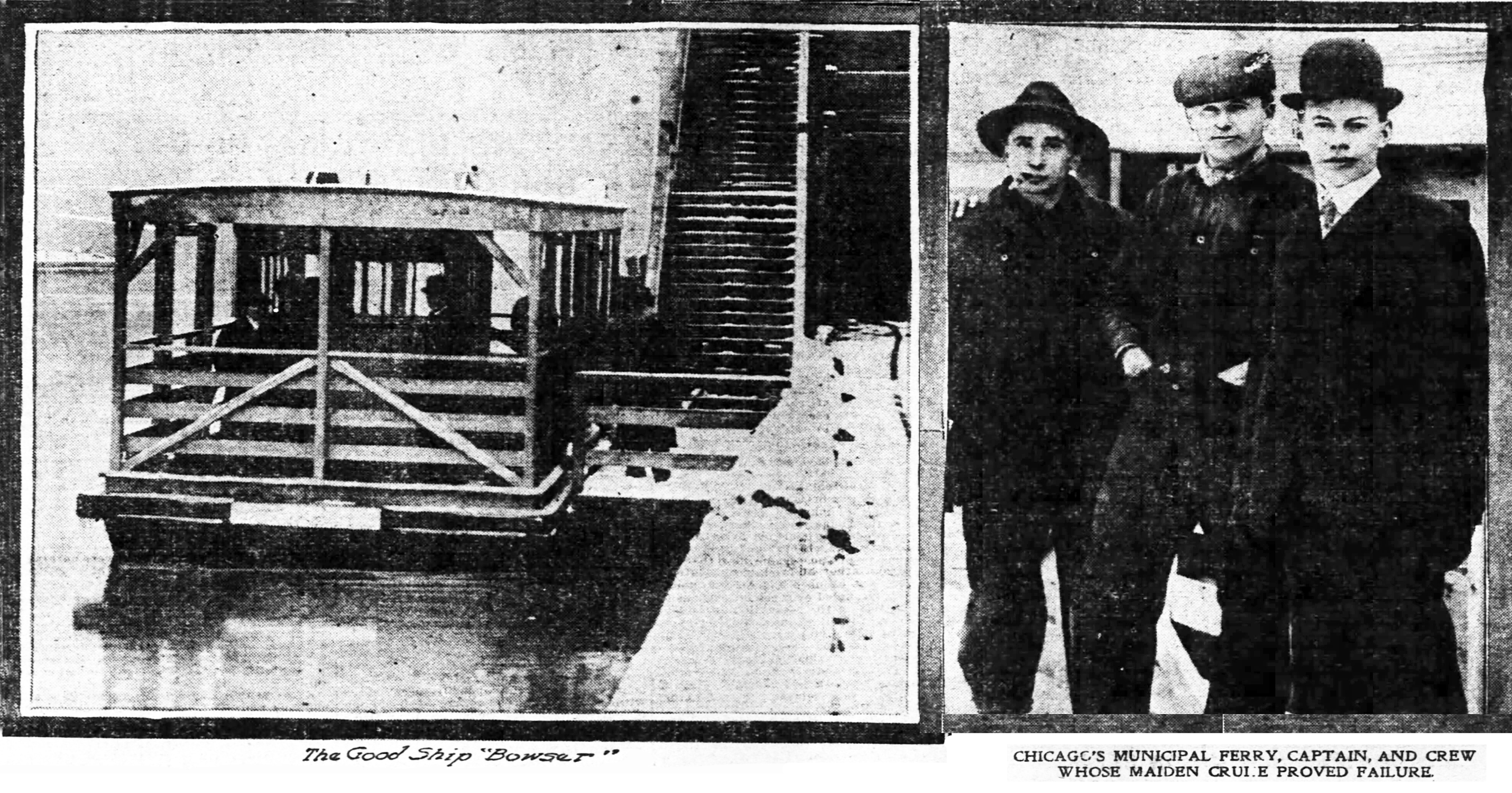 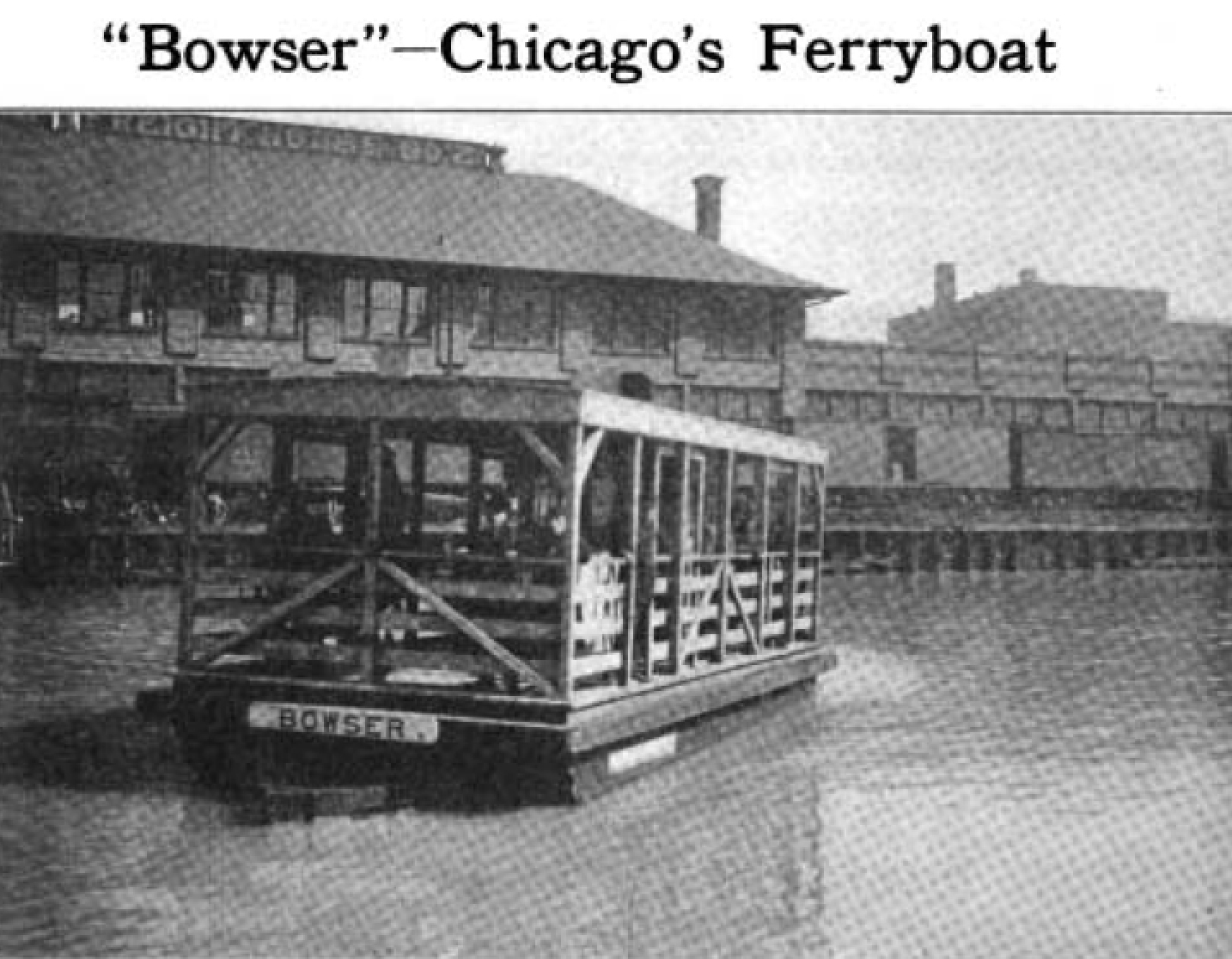 CHICAGO has taken up the motorboat as a means of municipal economy. and the above picture shows a view of the city’s new ferryboat. Bowser. This boat is not handsome in appearance. but has already proved its usefulness. The boat is used to carry passengers across the Chicago River wherever a bridge is being repaired or a new bridge is being built. This work is accomplished much more cheaply than if it were necessary to build temporary bridges. As the photograph shows, the Bowser is built on the catamaran plan, with two rudders at each end. The rudders at the forward end are placed together, V-shaped, and thus form a cut-water. The engine is a three-cylinder, sx6-inch. 18-hp. Anderson. built by the Anderson Engine Company of Shelbyville. III., and it has given perfect satisfaction in every way. 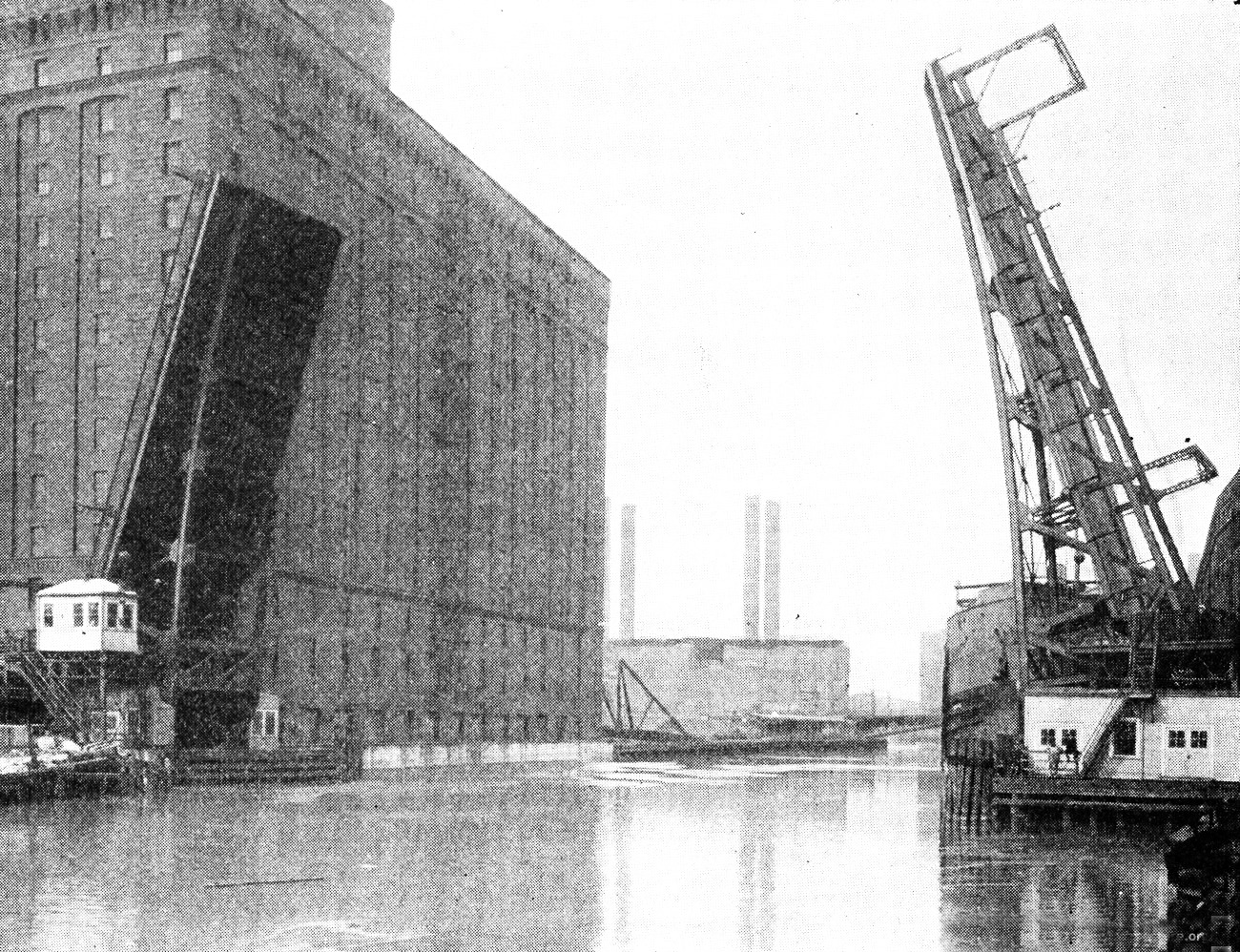 The Polk Street Bridge across the South Branch of the Chicago River will be closed Monday as contractors move in to tear down the 62-year-old span. Louis Koncza, city bridge engineer, said the city decided to tear bridge down because it was built for horse and buggy traffic in 1910, and it would cost $800,000 to renovate it. Plans are under way to replace the bridge, he said. 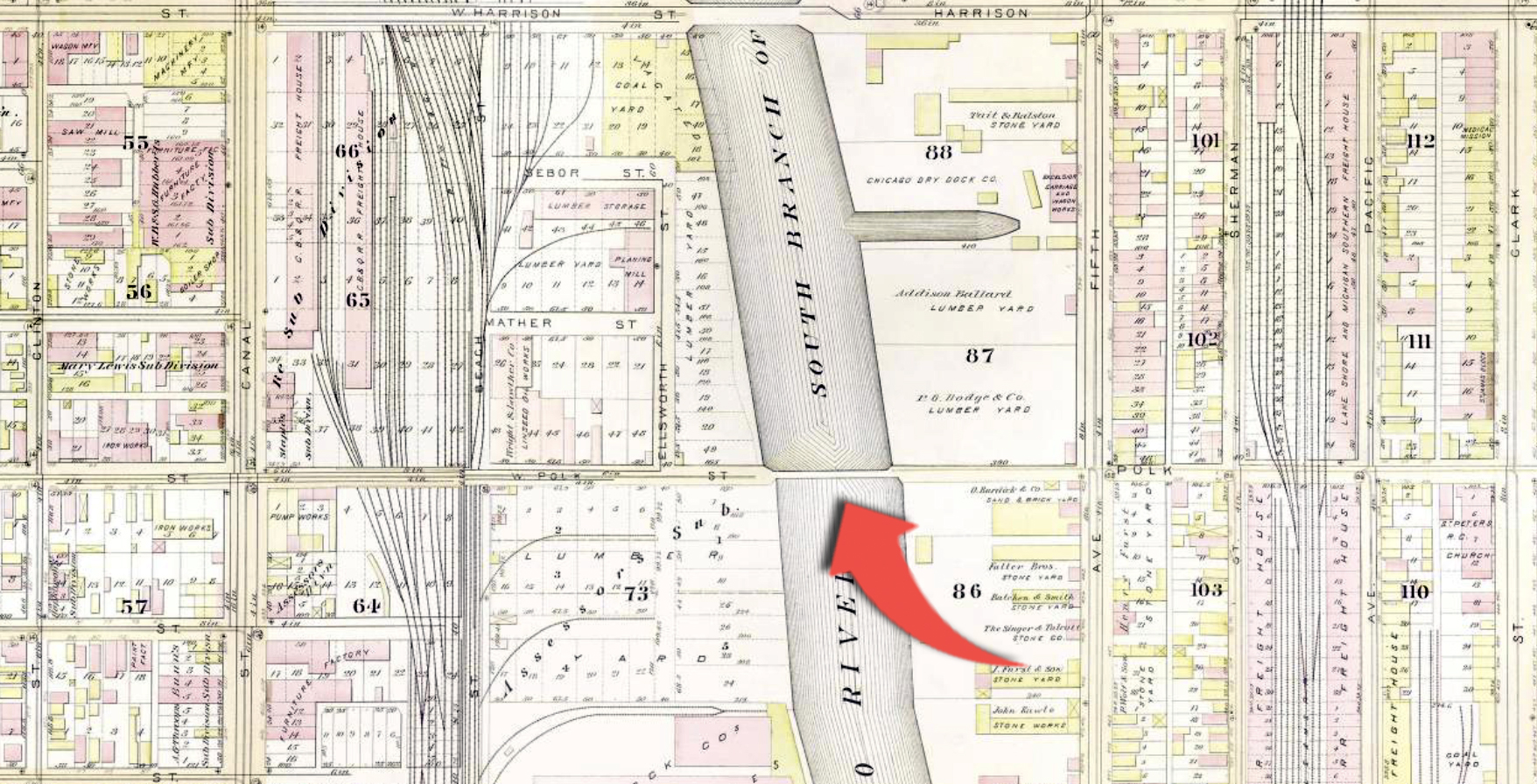