SUNK.—Twelfth street bridge has gone to the bottom. It was a miserable, rickety, floating concern, as most of our city readers know, and a long way behind the age. Yesterday, a schooner ran against it, and the old fashioned nuisance sunk to the bottom. It is to be hoped that the Board of Public Works will recommend, and the Common Council order, the construction of a bridge at Twelfth street, that will be neither a hinderance nor a discredit to the city.

THE TWELFTH STREET BRIDGE.—A West Side correspondent calls attention to the lack of facilities for crossing the river at Twelfth street, where a new bridge is being built. He says that one or two small boats are plying there, charging five cents a head, but that the only way of getting into them is by gong down a rickety ladder, uncomfortable for men, and exceedingly unpleasant for the ladies and children who accompanied him.

NEW BRIDGES.—The work of constructing the new Twelfth street bridge is rapidly progressing, the centre pier being now completed. It is stated that a movement is now on foot to secure the bridge of this river at Twenty-second street at Canal (South Side). 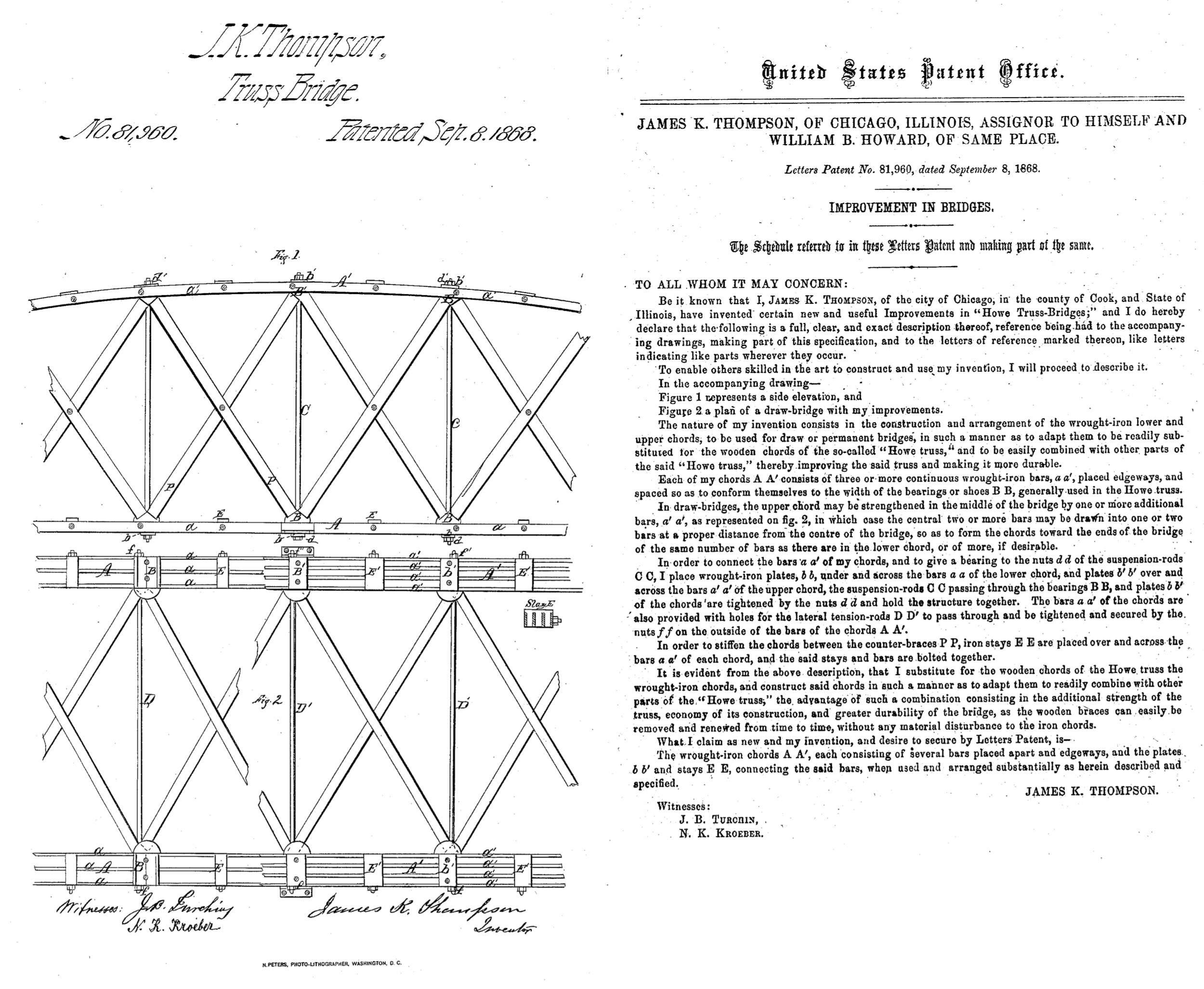 THE TWELFTH STREET BRIDGE IS NOW OPEN.
The new Twelfth street bridge, on which work has been progressing for so long a time, has been sufficiently completed to be opened to the public today. This isn one of the most expensive structures ever built by the City of Chicago. On the east side of the river the viaduct spans the Chicago, Rock Island & Pacific and Lake Shore & Michigan Southern Railroads with three truss spans of 123 feet each. The east bridge from the end of these spans to the east line of Clark street is supported by three heavy wrought-iron columns, and the roadway built on the level of the tracks affords access to the numerous freight depots in the vicinity. The approaches of the viaduct are built on Clark street, north and south from Twelfth, with an inclination of one foot in forty. Westward from the railroad tracks to the river a roaqdway is built of wooden trestles, as it is anticipated that the railroads will cross the street here, and it was not deemed best to erect a permanent iron structure until it could be determined what arrangement would be required for the spans. The river swing bridge is of steel, being the first bridge of this material ever built in Chicago. It is 220 feet long by 59 feet wide and similar in design to the Lake street>/a> and Rush street bridges. Westward the structure crosses the tracks of the Chicago & Great Western Road with plate-girder span of 58½ feet, one truss span of 72 feet, one truss span of 108 feet, and one truss span 125 feet long. There will also be an approach from the south side of Twelfth street and another approach on Lumber street. The first 300 feet of this approach is of plate girders divided into spans of 50 feet each and continued from the end of this to the street grade, with the usual walling and filling. This approach is 40 feet wide; all other parts of the work are 58 feet wide, divided into two roadways, each 21 feet wide, for teams, and two sidewalks 8 feet in width. The total length of the bridge is 1,550 feet.

When the original proposition to build this bridge was presented to the City Council only a single track was contemplated. The Great Western Railway Company desired that the bridge be built four feet higher than the plans proposed by the city, and several conferences resulted. The railroad finally agreed to pay the entire cost of the centre pier and also the east pier. With this arrangement a considerable portion of the appropriation remained, and it was then decided to change the plans to a double-roadway bridge bridge. The Great Western Company paid for the whole of the work on the west side of the river, and also the cost of the centre pier. The Lake Shore & Michigan Southern and the Chicago, Rock Island & Pacific Roads paid for the three spans over their tracks, and the rest of the amount was paid by the city. The total cost was $340,365. City-Engineer Artingstall is greatly gratified at the outcome of the enterprise, and unhesitatingly pronounces it the finest piece of work of its kind in Chicago. It turns with steam. 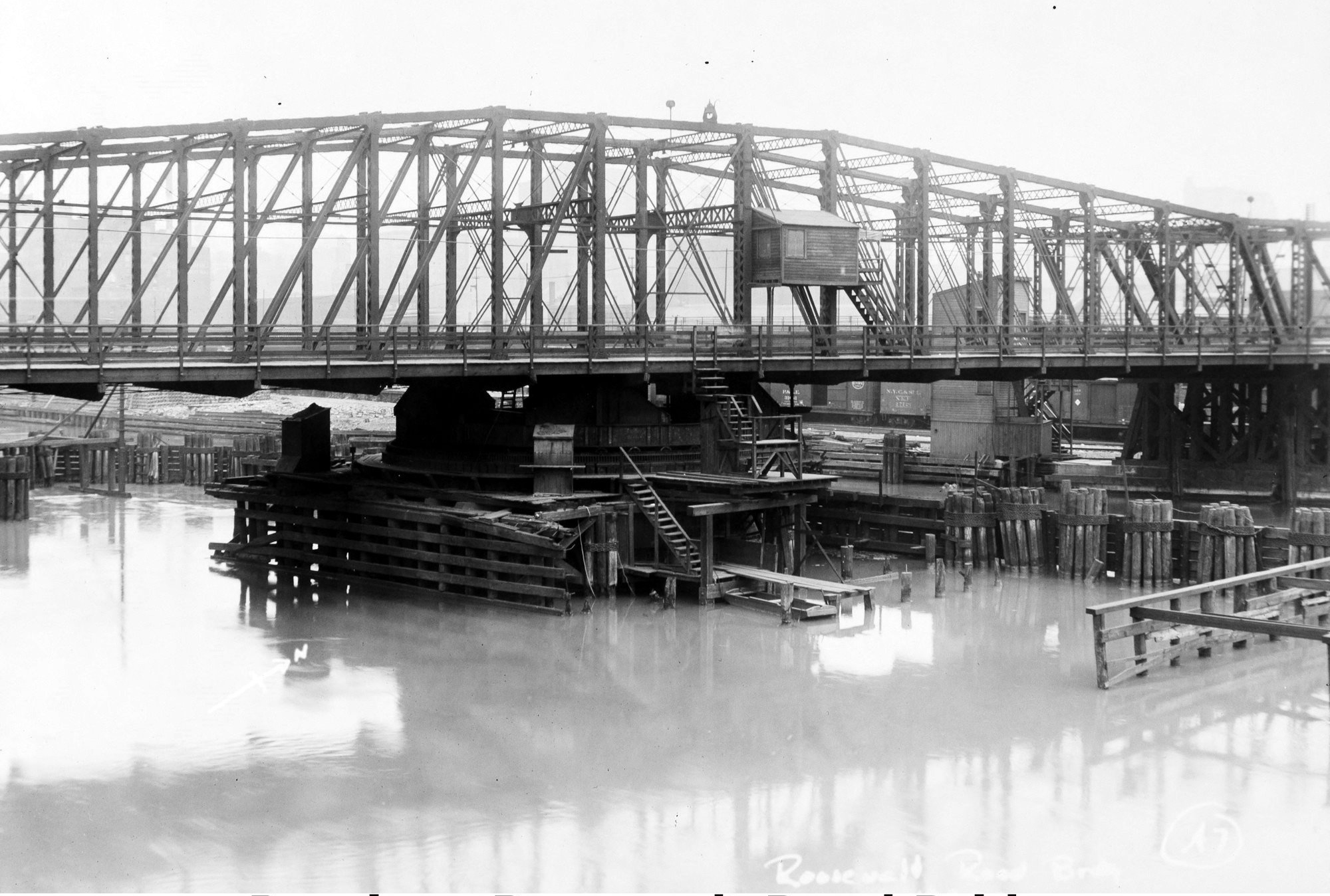 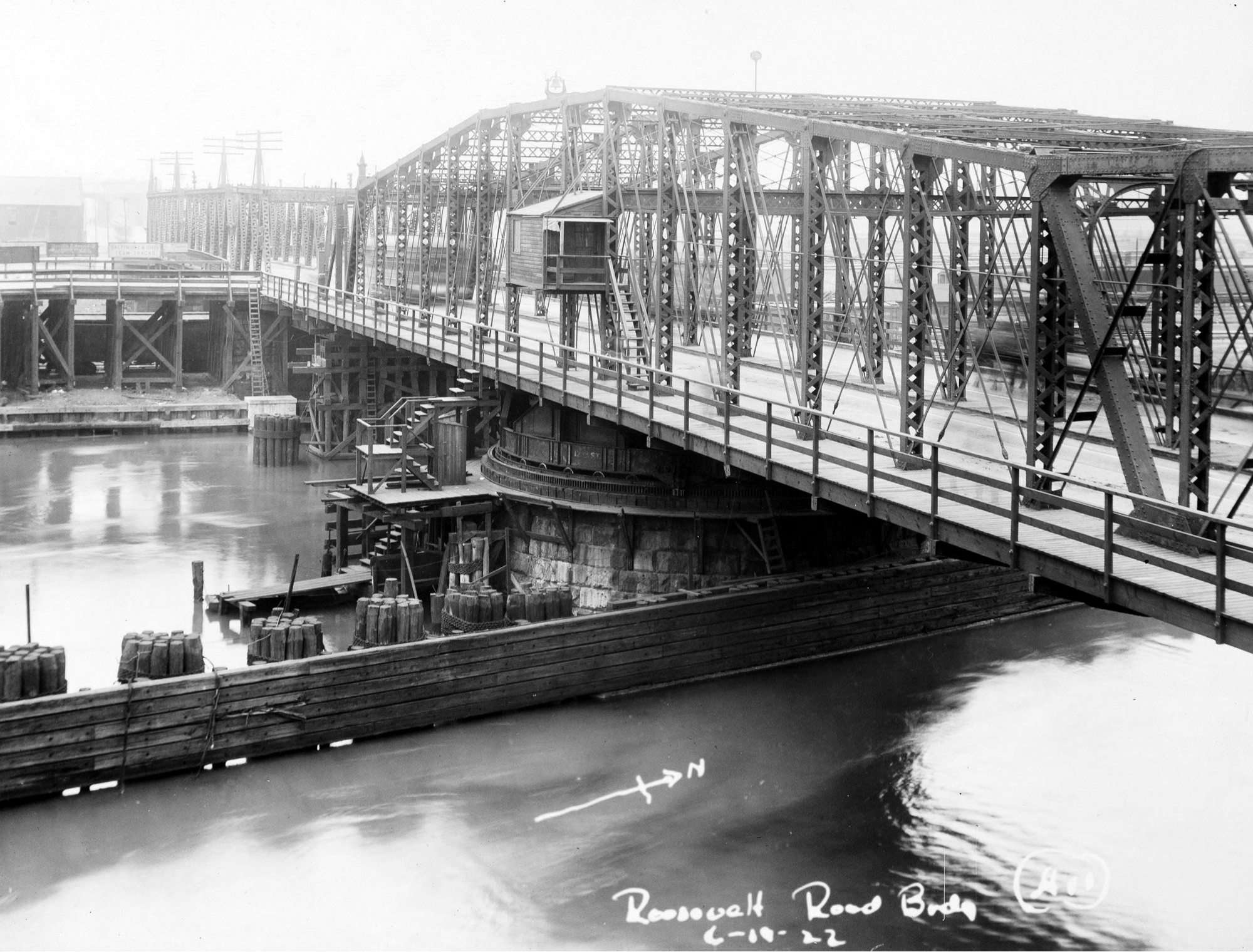 Commissioner of Public Works Frank I. Bennett announced he probably will reject the bids for construction of the new Twelfth Street bridge. The proposals are about 100 per cent more than the cost as estimated by city engineers. The best bid received was $1,173,000. 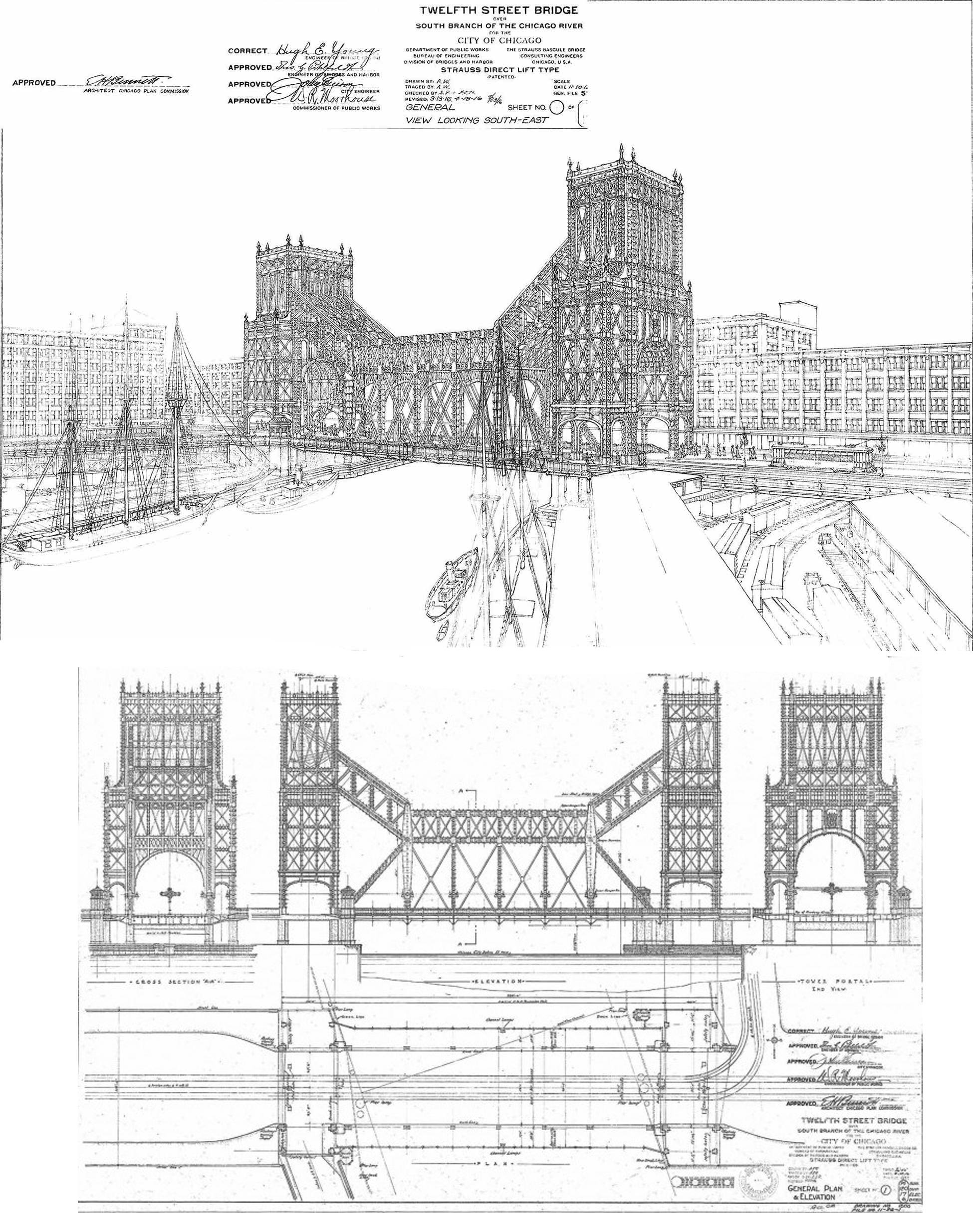 Twelfth St. Bascule Bridge #4
One of the 1916 Design Proposals 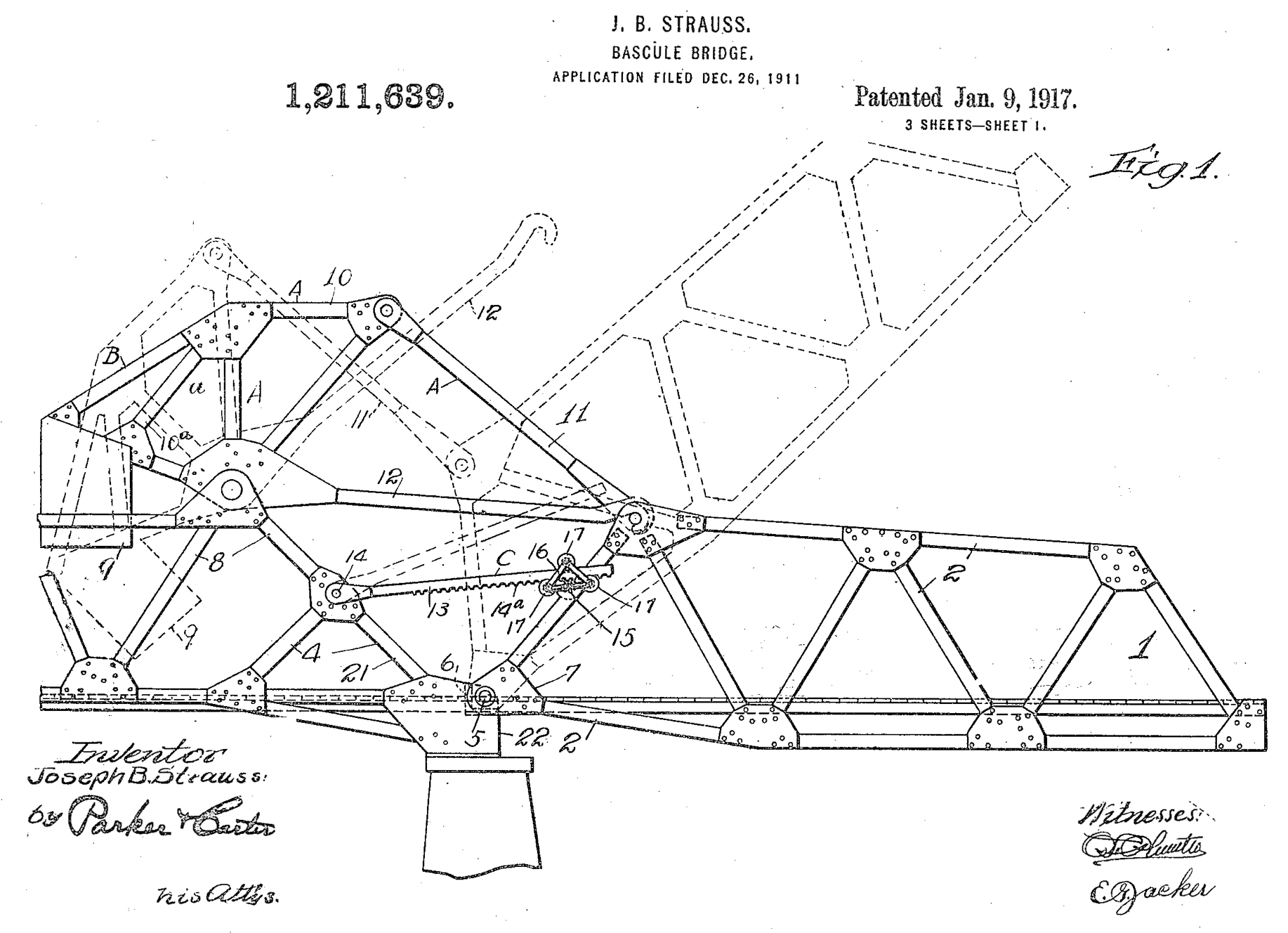 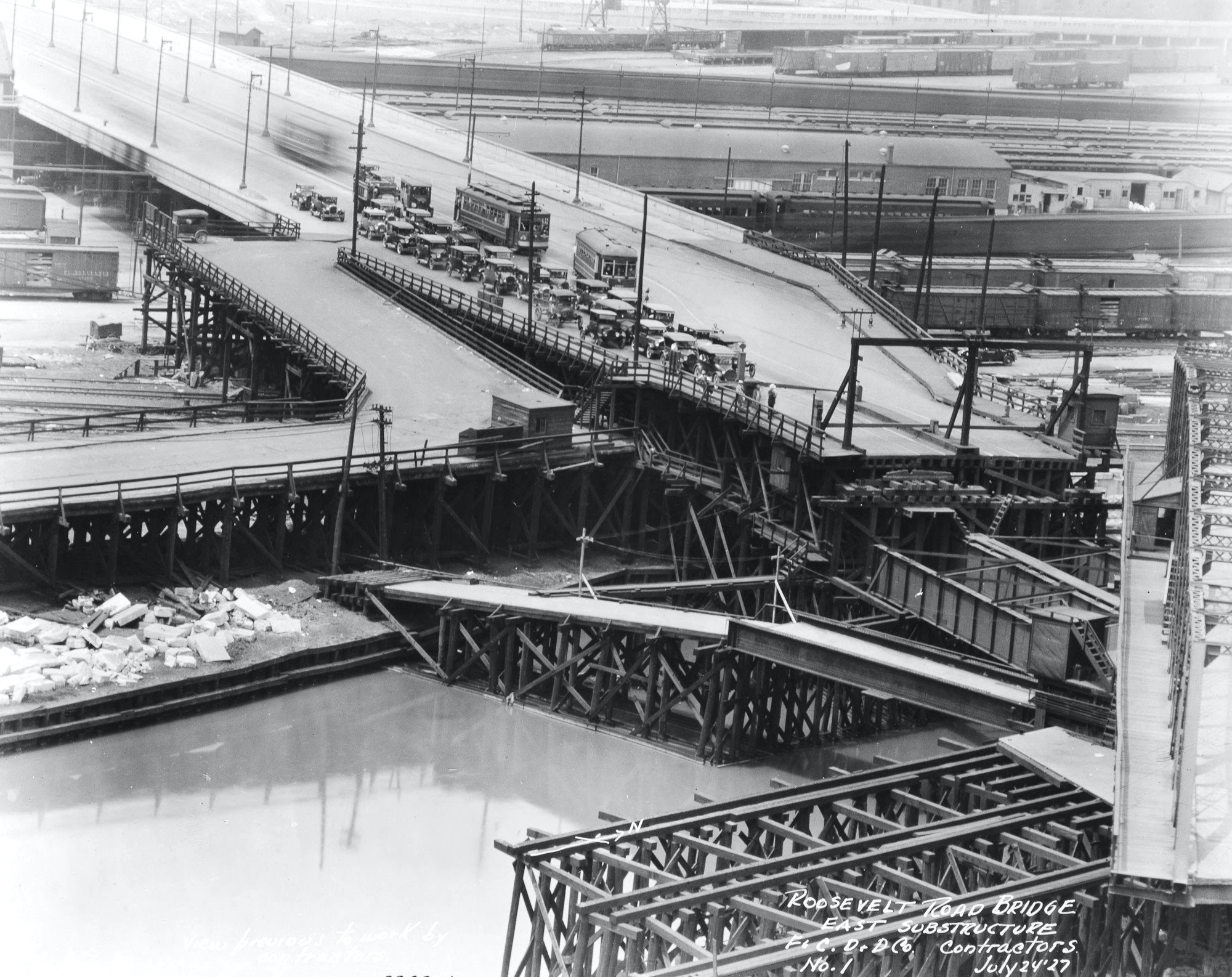 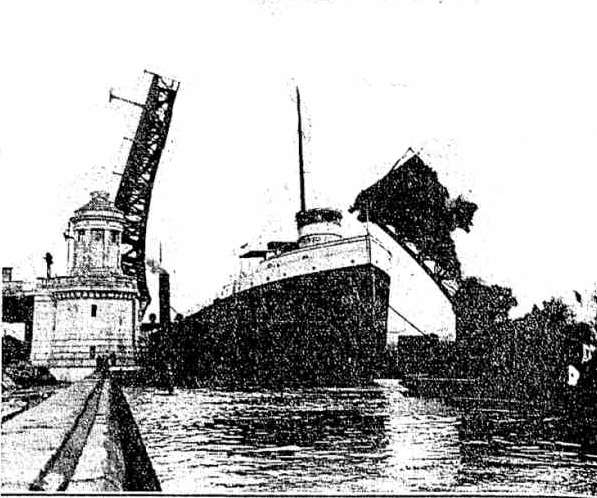 The S.S.O.S. McFarland of Fairport passing through the Roosevelt road bridge in new channel between Polk and l8th streets, which will not be formally opened until Thursday. 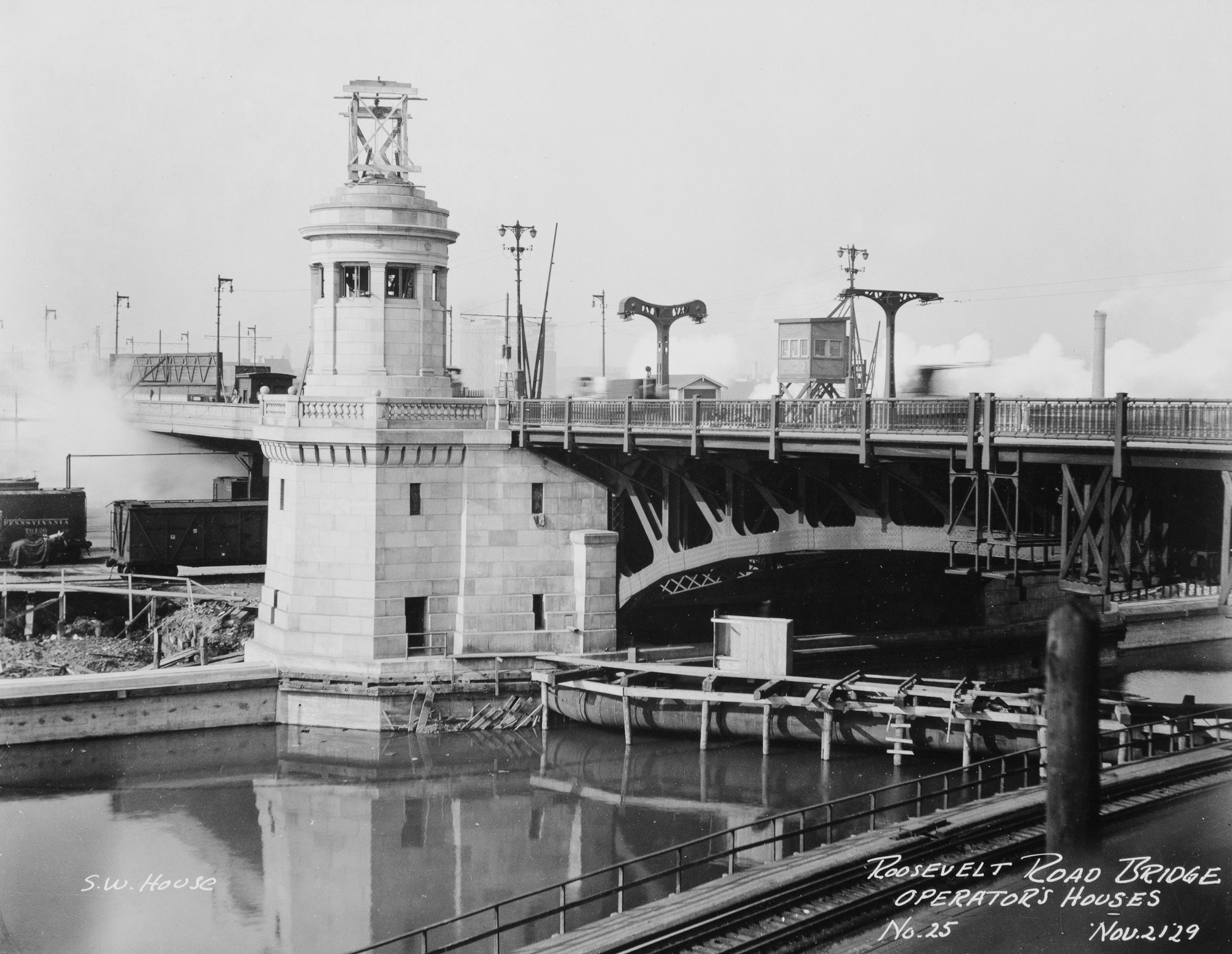