The Hotel Metropole Company was yesterday granted permission to erect a six-story and basement hotel, to cost $500,000, on lots numbering Nos. 2,300 to 2,308 Michigan avenue.

Architects at Work on Plans for Buildings Soon to be Erected.
Clinton J. Warren is drawing plans for a ten-story hotel, 73×171 feet, to cost about $500,000. It will be erected on the northwest corner of Twenty-first street and Michigan avenue, for N.K. Fairbank. The first two stories will be of stone and the upper stories of buff terra cotta pressed brick with handsome terra cotta cornice. The interior will be elaborately finished in hardwoods with marble wainscoting, tiled and mosaic floors, and the best of sanitary and modern appliances. The building will be heated by steam, lighted by electricity, and furnished with a service of three elevators. In its construction it will be absolutely fireproof. 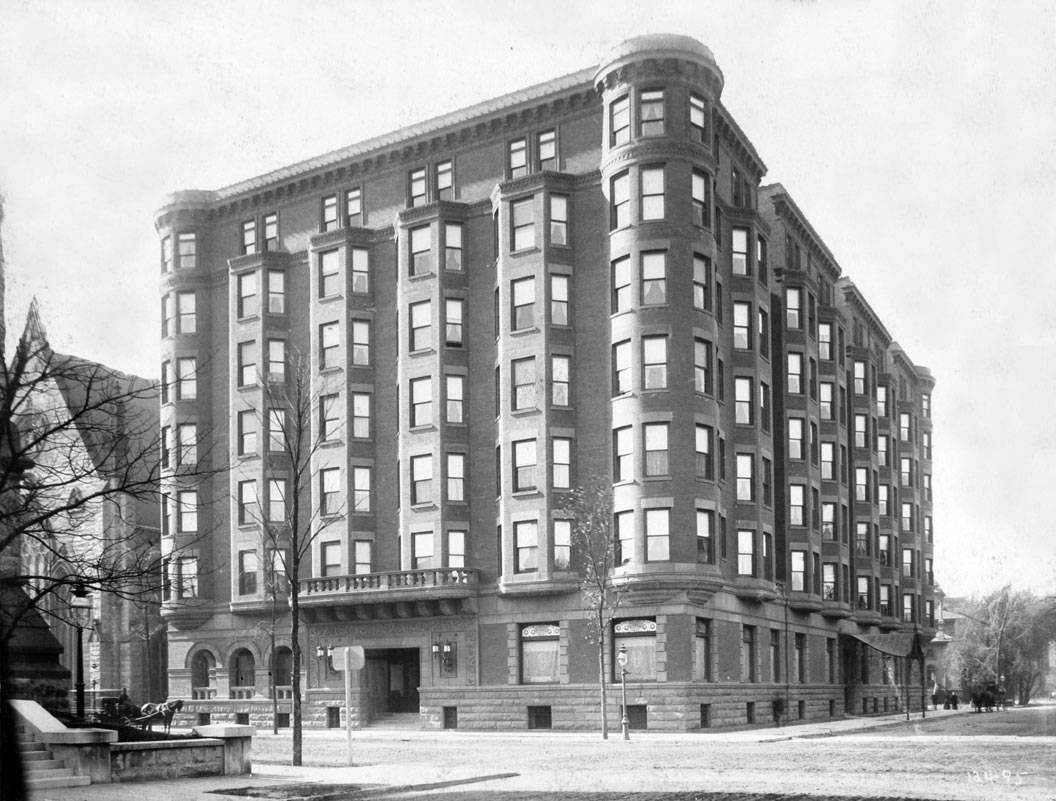 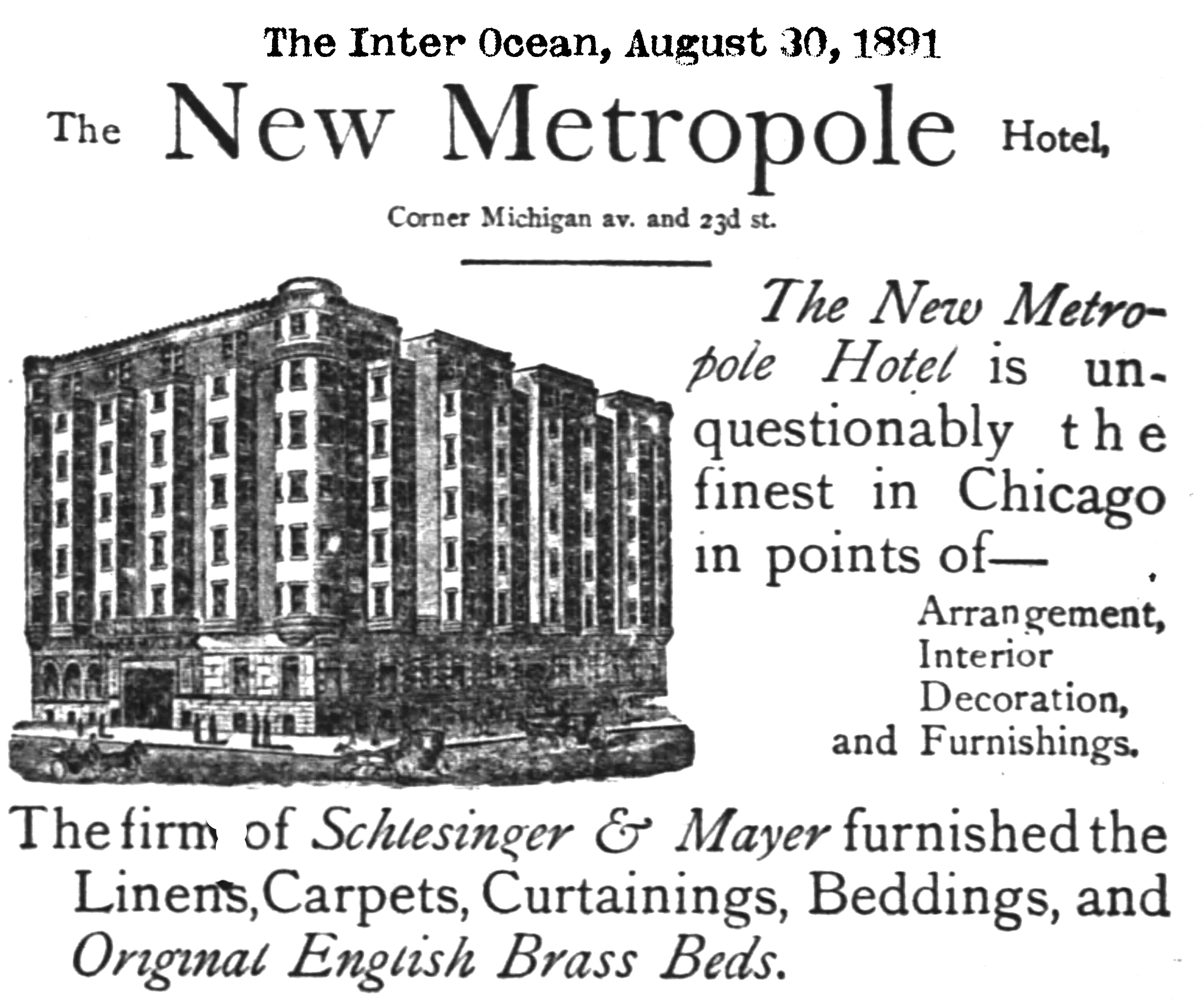 Opening of the Metropole.
The magnificent new Metropole Hotel, at the corner of Twenty-third street and Michigan boulevard, was opened last night. Messrs. Miller and Manager Sommers, the proprietors, issued many invitations, most of which met with personal response. The lobby was profusely decorated with flowers and palms. A fine luncheon had been prepared and unlimited champagne had been iced for the visitors. Among those present were:

A movement to purchase the Metropole Hotel at 23rd street and South Michigan avenue, Chicago, and convert it into a Baptist hospital was begun this week at the meeting of the Chicago Baptist association at Immanuel church.

Dr. Johnson Meyers, pastor of Immanuel church, which adjoins the Metropole Hotel on the south, made an earnest plea for the project and a committee of seven was authorized by the association to see if the plan can be consummated.

Henderson Is a Witness.
Parker Henderson (son of a former Miami mayor) took the witness stand yesterday after state’s attorney Vernon Hawthorne had been heard, and readily identified various money orders which had been sent to Capone under the Costa alias and which Capone had sent him to cash.

Henderson, who was owner and manager of the Ponce de Leon hotel at the time Capone and his gang occupied several rooms there in the winter of 1927-’28, said that a number of Miami Beach real estate men wanted to sell property to Capone, but that he and the mayor of Miami Beach thought they might as well get in and do this job themselves. So they did.

Henderson later came to Chicago to see Capone at the Metropole. He wanted more money to pay the workmen at the Miami house. He got the money and was entertained by Capone for several days. He described the rooms and said he saw Ralph Capone there, Jack Guzik, Fischetti, and Jack McGurn.

Scenes at the Metropole.
Hotel Metropole scenes were further described by McLean Smith, day clerk and cashier there, and Fred Avery, then the manager.

Smith said that Capone lived at the hotel from 1925 to the summer of 1928, and had a suite of five rooms which were used all the time and four rooms which were reserved for his guests and frequently occupied.

Capone always had three or four people with him, the clerk said. He was known as “Mr. Ross.” Smith identified Capone in court. Capone, who had tossed him many “gratuities” in the old days, smiled at the clerk now from his seat behind his attorneys.

Mr. Avery recalled that Capone occupied about eight rooms and said the doors were guarded. He said he was admitted to the Capone rooms on one occasion, after the famous Dempsy-Tunney fight banquet, when he wanted to collect a bill.

Cyrus Campe, 1 N. La Salle street, is the receiver for the Metropole Hotel, 2300 S. Michigan avenue. Jas. H. Byrd, a young man with a good knowledge of hotel operation, and late of the Seneca Hotel, is the new manager. Receivers took full charge January 1st, and have made many changes that no doubt will prove beneficial.

The 300-room Metropole hotel, 2300 S. Michigan av., a history-laden relic of Chicago’s past, has been sold, it was disclosed yesterday.

The hotel played host to celebrities at the time of the World’s Columbian exposition in 1893, then became headquarters for gangster Al Capone and henchmen, and finally faded from public notice when South Michigan avenue real estate fortunes slipped.

Mrs. Moss intends to continue the hotel operation, Levy said. But South Michigan avenue real estate is attracting renewed interest from developers and rebirth of the area in a few years could lead to razing of the Metropole. 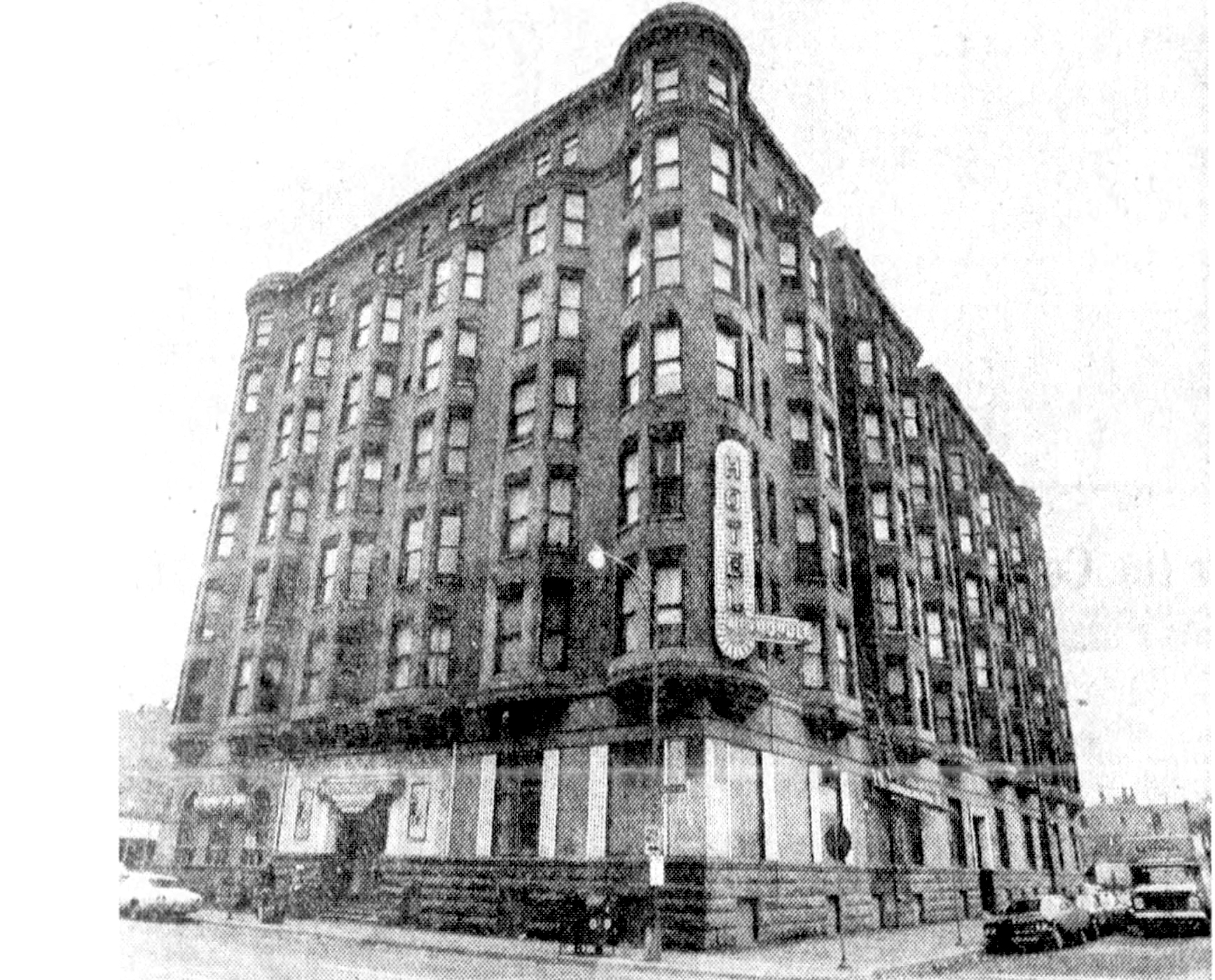 Like Ghostly survivors of an unexplainable financial wreck, the small band of faithful tenants kept watch by candlelight early Thursday over the remains of the Metropole Hotel.

Alomg the echoing corridors of the building at 2300 S. Michigan Av. where Al Capone and his henchmen once held court, the self-appointed guardians patrolled with flashlights to prevent vandals from entering a building that seemed abandoned by everyone but themselves.

Later on Wednesday, the 75 persons still living in the hotel had reportedly been offered rooms in a hotel at 4641 S. Woodlawn Av. by the landlord of the Metropole. But the old, the ill, the stubborn, and the sentimental—decided to stay.

“After five or 10 years in the building, it’s home,” said Burnett Travers Brown, 27, a mechanic who has lived there for five years, “I wasn’t ready to go.”

Brown and seven of the other tenants pushed aside tables and chairs in the first floor Metropole Dining Room and put mattresses and blankets from a nearby storage room on the floor. 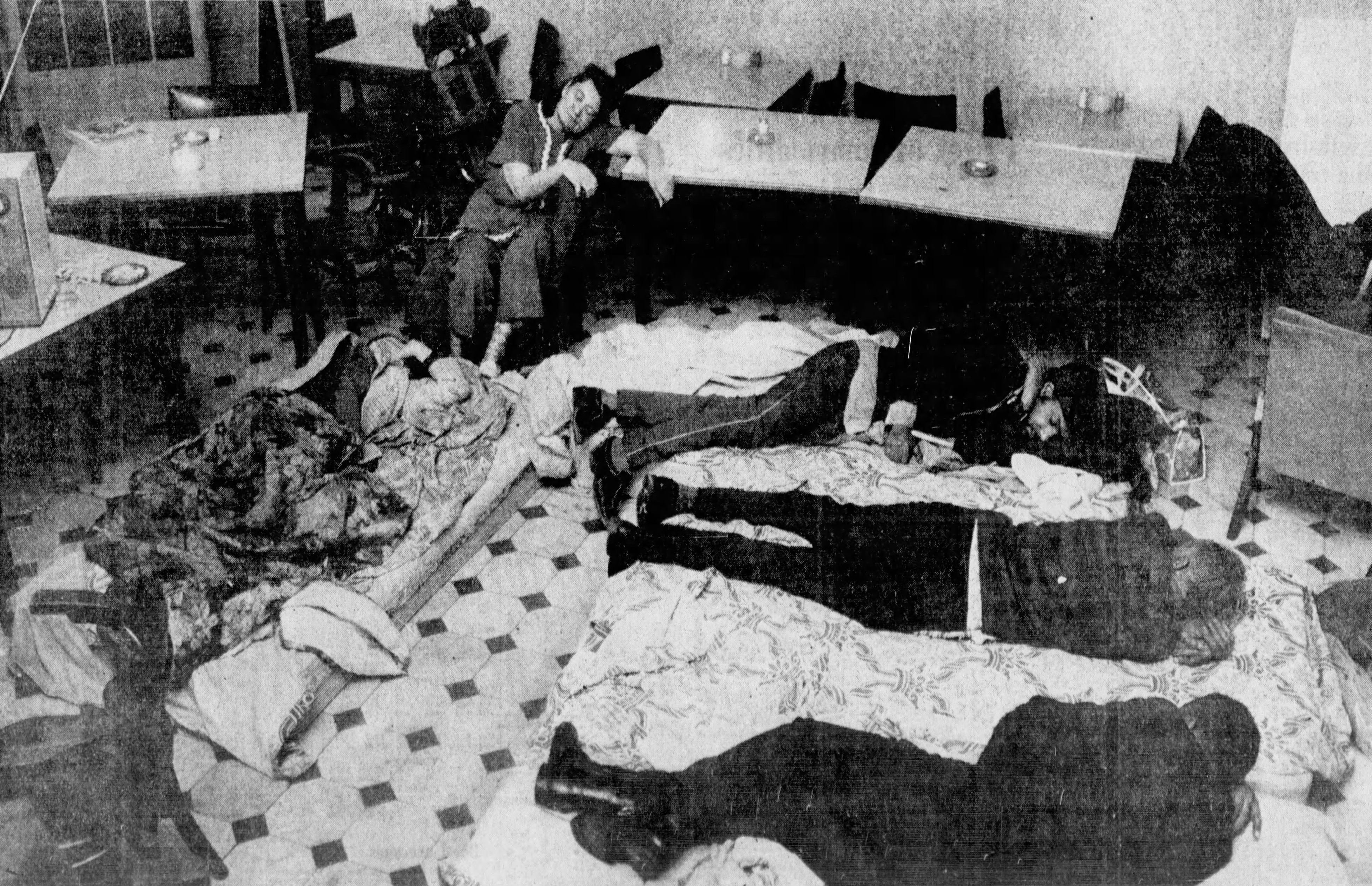 They then turned up the gas ovens in the kitchen to full heat, since gas was the only commodity still being supplied, and proceeded to encamp the room—hoping the building would rapidly be placed in receivership and thus preserved. Four other persons, including a 72-year-old invalid who could not move from the building, established themselves in upper-story rooms with gas heaters.

“In the three years I’ve been here,” said Thaddeus Williams, 56, a taxi driver—and, with Brown, a leader of the tenant group—”I got attached to the building. It seems to be a good old lady.”

Speaking in the light of the candles set up at intervals along the dining room counter, Williams said the plan was to patrol the corridors hourly for vandals and keep tabs on the tenants in the isolated rooms upstairs. If the building survives undamaged, he said, it may be possible for tenants to return to their old rooms.

“When they turned the water off, everybody panicked,” said Jess Hill, 45, another taxi driver who has lived at the Metropole for 10 years. “But if somebody doesn’t stay here, they (vandals) will clean this building out.”

“We would meet for meals in the dining room, and we got to know each other,” he said.

“It’s just like home to me,” he said. “I’ve been treated like a person since I’ve been here.”