Organized in 1876 with a teaching faculty of nineteen and forty-five matriculates.

Its first term opened October 4 of that year in a leased building. By 1881 the college had outgrown its first quarters and a commodious well appointed structure was erected by the trustees, in a more desirable location.

The institution was among the first to introduce a graded course of instruction extending over a period of eighteen years. In 1897 the matriculating class numbered over 200. 1904 merged with Hahnemann Medical College.

The new building of the Chicago Homeopathic College, at the corner of Wood and York streets, is rapidly approaching completion, and is one that merits particular notice as adding greatly to the architectural beauty of the city, besides representing a most successful and popular medical institution. It was erected this season, the foundation being laid last May, to accommodate the steadily increasing classes at the old College, corner of Michigan avenue and Van Buren street, and is said to be the largest college building devoted to the teaching of Homeopathy in the county. It is situated directly opposite the Cook County Hospital, which is conceded to be one of the best equipped hospitals in the country, and which furnishes in its clinics, surgical operations, and autopsies unsurpassed advantages to students. It is in the same square as the Rush Medical College, the Woman’s College, and the Chicago Training School for Misses, and is in close proximity to the Foundling’s Home. The structure is four stories high, not including a deep basement, and the style of architecture is generally gothic, modified by a mansard roof. It is built of pressed brick, with stone trimmings, and presents an exceedingly attractive and imposing appearance. The frontage on Wood street, where the main entrance is located, is seventy-two feet, and runs back a distance of seventy-eight feet on York street, where there is a side entrance. Both fronts are provided with broad flagstone pavements, and the main entrance is approached by massive stone steps. 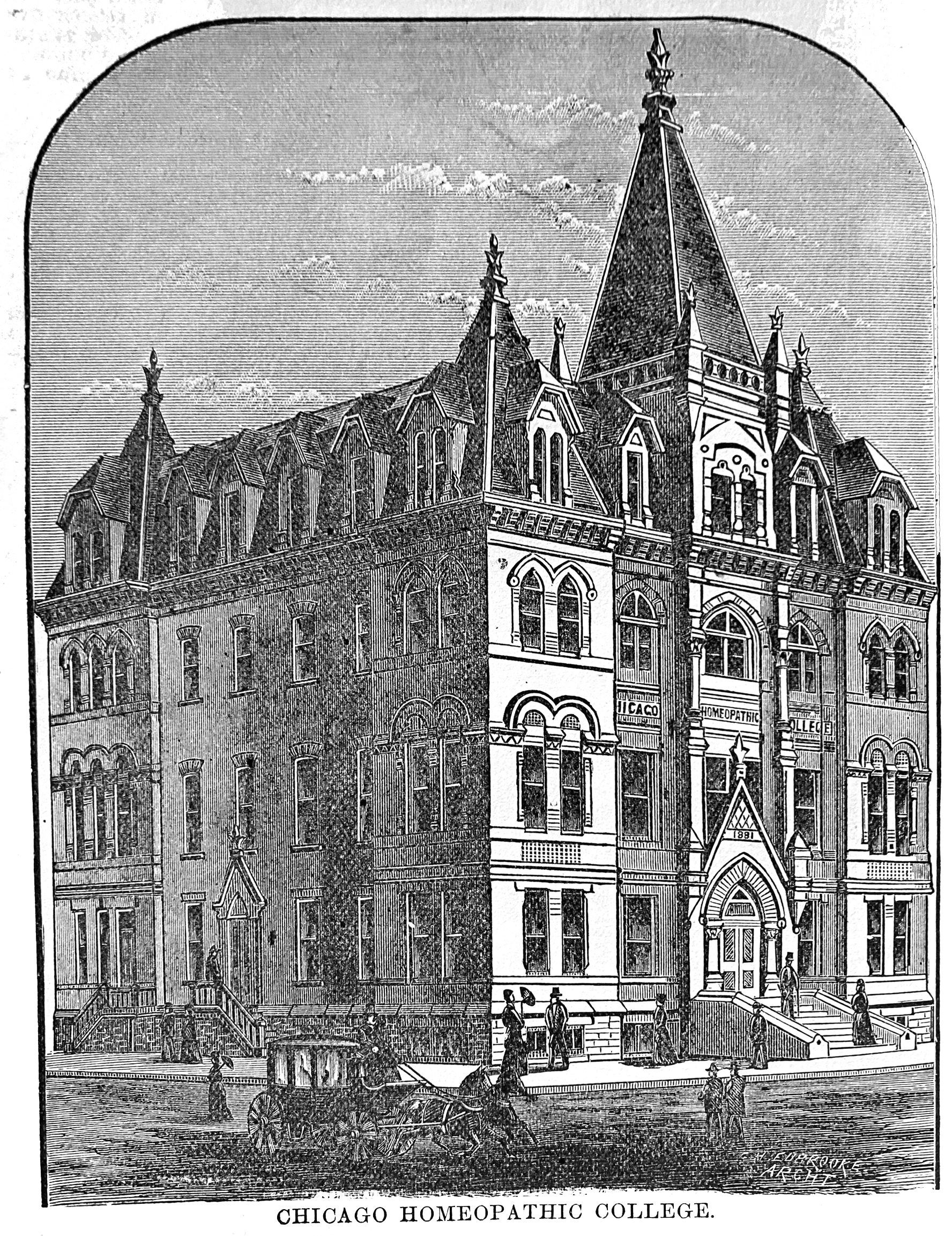 THE INTERIOR FINISH
is plain, but extremely neat, and the conveniences which the whole possesses as a college could scarcely be excelled. On the first floor is a clinical lecture-room, provided with 100 opera chairs with desk attachments, a large waiting-room, a medicine-room, resident physician’s office, free dispensary, and six consultation-rooms. On the second floor are two large cloak-rooms, two lecture-rooms, 34×42, provided with 150 opera chairs, arranged in amphitheatre style, a chemical laboratory 20×30, fitted up with tables to accommodate thirty-six students in practical work at one time, and an anatomical museum 20×32. On the third floor, in the centre, is located the clinical amphitheatre, 64×42, running through the fourth floor to the circular skylight, eighteen feet in diameter. The amphitheatre is provided with 500 opera chairs, and its entire arrangement is the very acme of perfection and convenience. On the same floor is found the microscopical laboratory, 18×30, and likewise a museum 40×40, and eight rooms to accommodate patients after being subjected to clinical operations—clinical wards. On the fourth floor, surrounding the upper part of the amphitheatre, are two large dissecting-rooms, 20×40, provided with skylight and excellent facilities for the character of the work for which the rooms are designed, and a number of small rooms which can be used as private offices by the Professors. The basement is to be occupied by the janitor, heating apparatus, ice-house—for the storage of cadavers—and so forth. There are also number of small utility rooms on the different floors not mentioned. The cost of of the building was, or will be, $40,000. It will be opened Sept. 23, for the preliminary term, and Oct. 3 for the regular winter term.

Chicago Homeopathic College.—The Chicago Homeopathic Medical College, situated on the corner of Wood and York streets, directly opposite the great Cook County Hospital, is one of the most elegant and commodious educational edifices in the city. It is generally conceded to be the largest and best equipped homeopathic building in this country.- It was incorporated by the authority of the State of Illinois, in 1876, for tne purpose of establishing and maintaining a high grade of medical education; and its history has been one of continued and almost phenomenal prosperity.

The course of instruction in this institution is graded, scientific, and eminently practical, and every facility is afforded for acquiring a thorough medical education. The daily clinics held in the college building, lying-in and general hospitals, give special advantages unsurpassed by any other homeopathic school.

As will be seen from the above list, the gentlemen of the faculty are the leading physicians of the new school in Chicago, and their personal character and professional reputation are a sufficient guarantee of the standing of the institution and its thorough and complete system of instruction. Its object is not to graduate as many students as possible, but to provide those who do graduate with a thorough knowledge of medical and surgical science and see that they are well equipped for the practice of their profession. A diploma from the Chicago Homeopathic College is a passport that the medical profession throughout the world receives and recognizes as an evidence of ability and learning.

Students from outside the city can find pleasant and comfortable boarding-places near the college building. 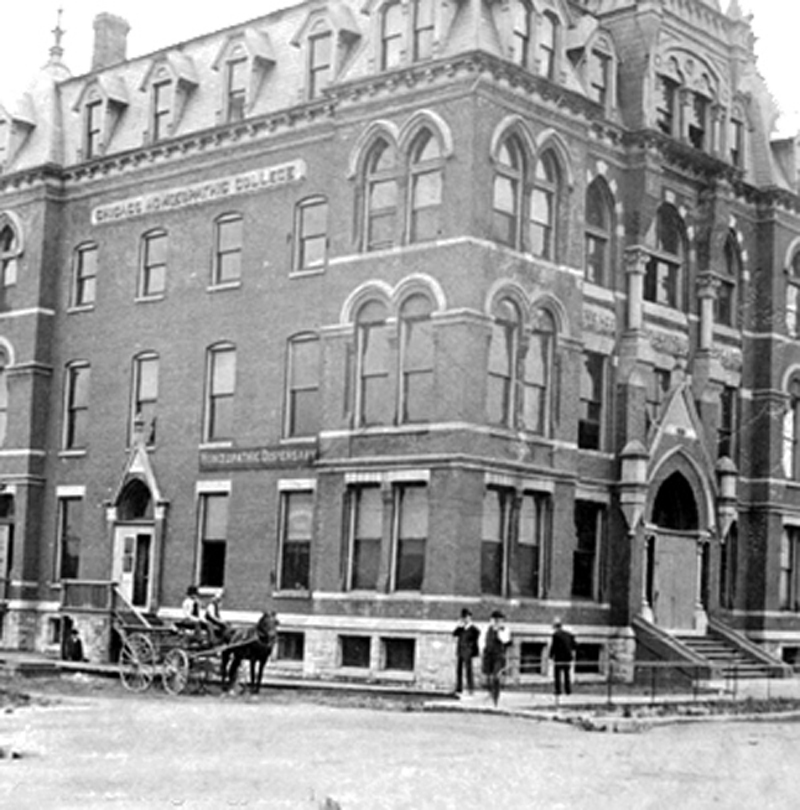