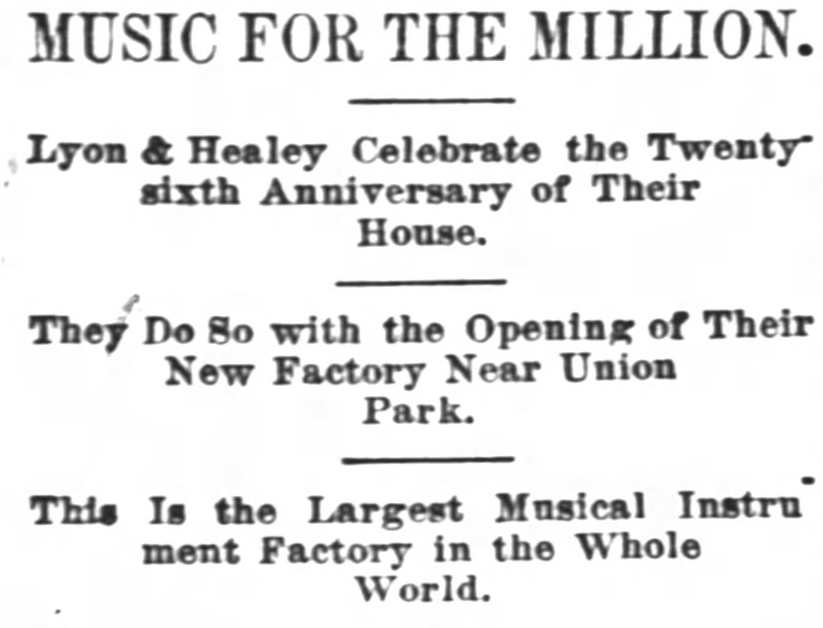 Appreciation, interest and pleasure are sometimes combined. Yesterday this trinity was happily united Messrs. Lyon and Healey entertained company of musical and journalistic friends at their new factory, on West Randolph street opposite Union Park. The occasion was the general opening to the public of the factory which has been but recently built and which has been in use about six weeks. The occasion was also interesting because of the notable fact that it was the twenty-sixth anniversary of the first opening in Chicago of the firm of Lyon & Healey. The firm has grown since the day it first hung a lyre before its door and invited the public in. The city has also grown, but the firm and its business has kept pace with

The Development of Chicago.
So strongly and well has the firm developed, so thoroughly has its business enlarged, that to-day it owns the largest factory of musical instruments in the wide world. This is saying much, but it is the truth, and it is a fact of which not alone in Chicago, but the United States ought to be proud.

It seems startling that a young city should have in its mist the greatest musical instrument factory in the world, when Europe has held the key to all musical enterprises for years past. Think of a Chicago firm manufacturing musical instruments so carefully and so cheaply that a London firm receives to-day 3,000 banjos imported from Chicago to England, rivaling the foreign article in every respect. Indeed, Chicago has grown to be a musical center, and London, music loving and appreciative, knows this perhaps better than Chicago people seem to do. 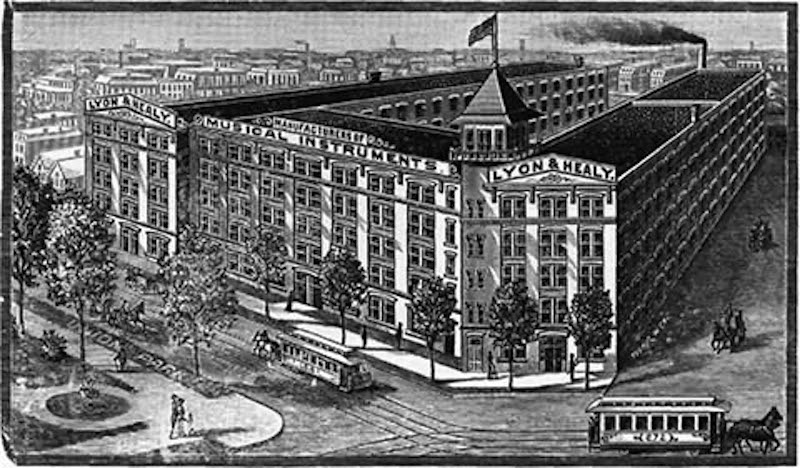 The Visitors Who Called
at the factory found a magnificent brick structure five stories high, containing no less than 95,000 square feet of room. The site is at the corners of Ogden avenue, Randolph street, and Bryan place, facing Union Park. The building has a red pressed-brick front, and is fitted with all the modern improvements in the way of engines, heating and ventilating apparatus, etc. It is divided into three wings, of musical instruments, except those of brass and pianos.

Mr. P.J. Healey and Mr. Gregory piloted the party through the various departments. Every one was full of interest for various reasons. Every modern invention known to the music trade was employed here.

On the second floor, for instance, is the guitar department. In this department the visitors saw about seven thousand guitars in the various stages of evolution. The thin strips of rosewood are first put into iron cylinders as they come from the planing mill below, and the cylinders are heated to a certain temperature. The wood, when in right condition, is bent into the different circles and shapes required. After the bending process they are passed forward in pairs to workmen who inclose them in a form and cut them to the required lengths. They are then glued together by affixing a substantial block of wood at each end inside the frame. These blocks not only serve to hold the sides in place, but are also used for receiving the neck, which is

Mortised in at the Small End.
At the large end the block is bored to receive the button. After these blocks are put inin place the frames are again passed forward to another set of men, who glue in the lining. The lining consists of small pliable strips of wood full of minute saw cuts, so they may easily fit the different curves of the instrument. The lining is placed around both edges inside the frame in order to increase the surface of the upper and lower edges in gluing on the top and bottom of the guitar. The thin rosewood edge would not hold the top bottom, or if it did the construction would be too weak to withstand any strain whatever. The body of the guitar is next turned over to workmen who brace the top and back with ribs or cross-pieces, which are glued to the sides. After this has been done the guitar is put into specially made forms and forced by a number of screws into its proper position. These forms are then enclosed in a press and kept there until thoroughly dry. This method of keeping the guitar is a form during the gluing process insures a positive alignment of the instrument when finished—a result never before satisfactorily accomplished. After coming coming from the presses the guitars are turned over yo workmen who fit the necks to the bodies. This requires the employment of a very careful, painstaking, and experienced set of men, as the proper fit of the neck is most essential to an easy-playing instrument. The rosewood part of the case now undergoes a filling process before polishing is done, as the wood is very porous and its surface has to be made ready to receive and show the French polish, which, although the most expensive style of finish, is also the most lasting, and, if properly applied, will last for years. When polished the guitars are taken to the regulating department, where they are carefully tested, string, and tuned. 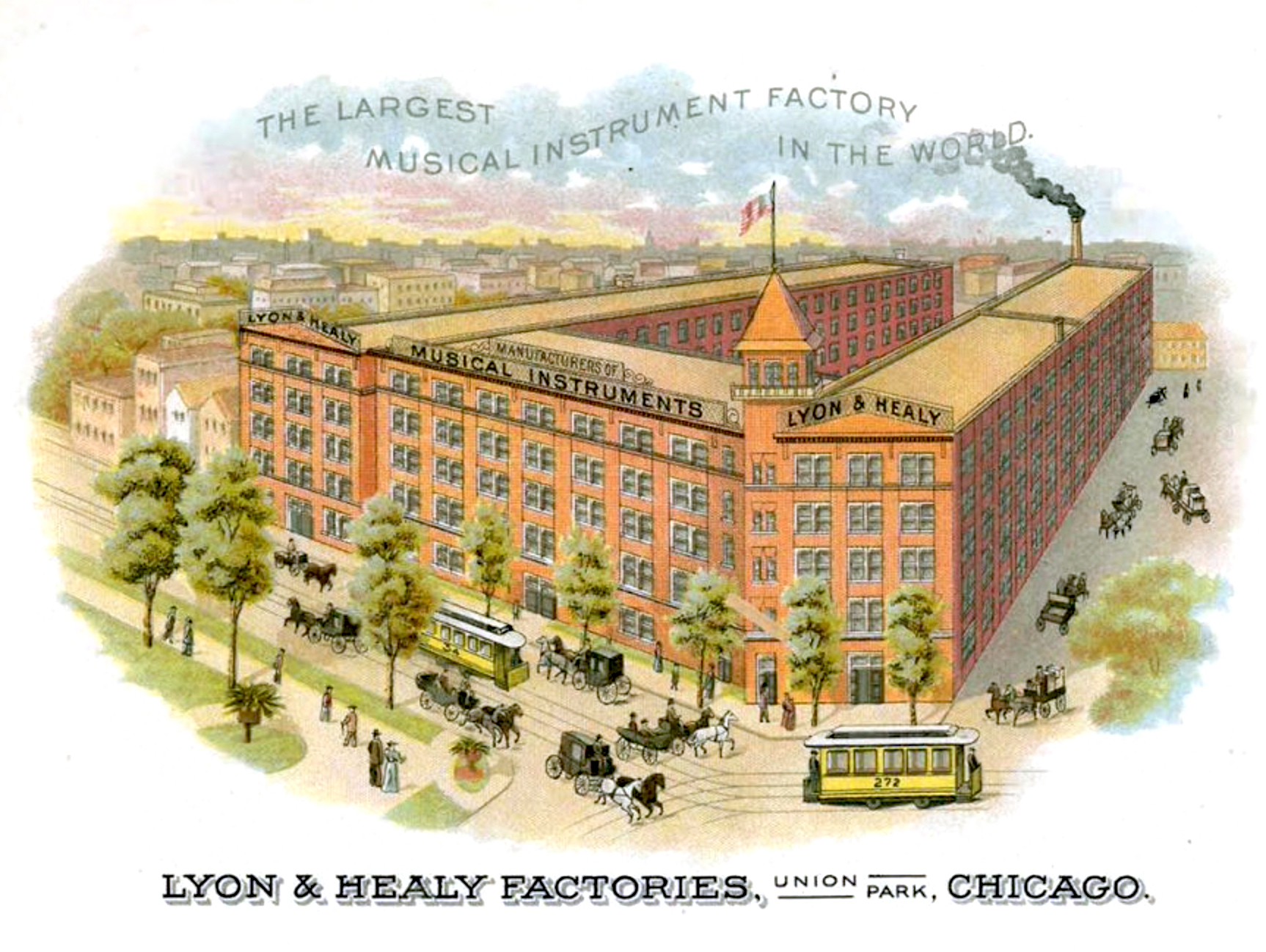 They Are Then Packed
in cotton-flannel bags, wrapped in heavy paper, labeled, and sent to the packing-room, ready for shipment.

Mr. Gregory said that in addition to the numerous patented machines and appliances used in the factory, and this factory only, all of the machinery is of the very latest pattern, and when anything new and useful is presented to them, they at once adopt it, if any saving in time or money can be made by so doing.

After the inspection came a collation served by Eckhardt, and music by the Valisi Mandolin Orchestra. 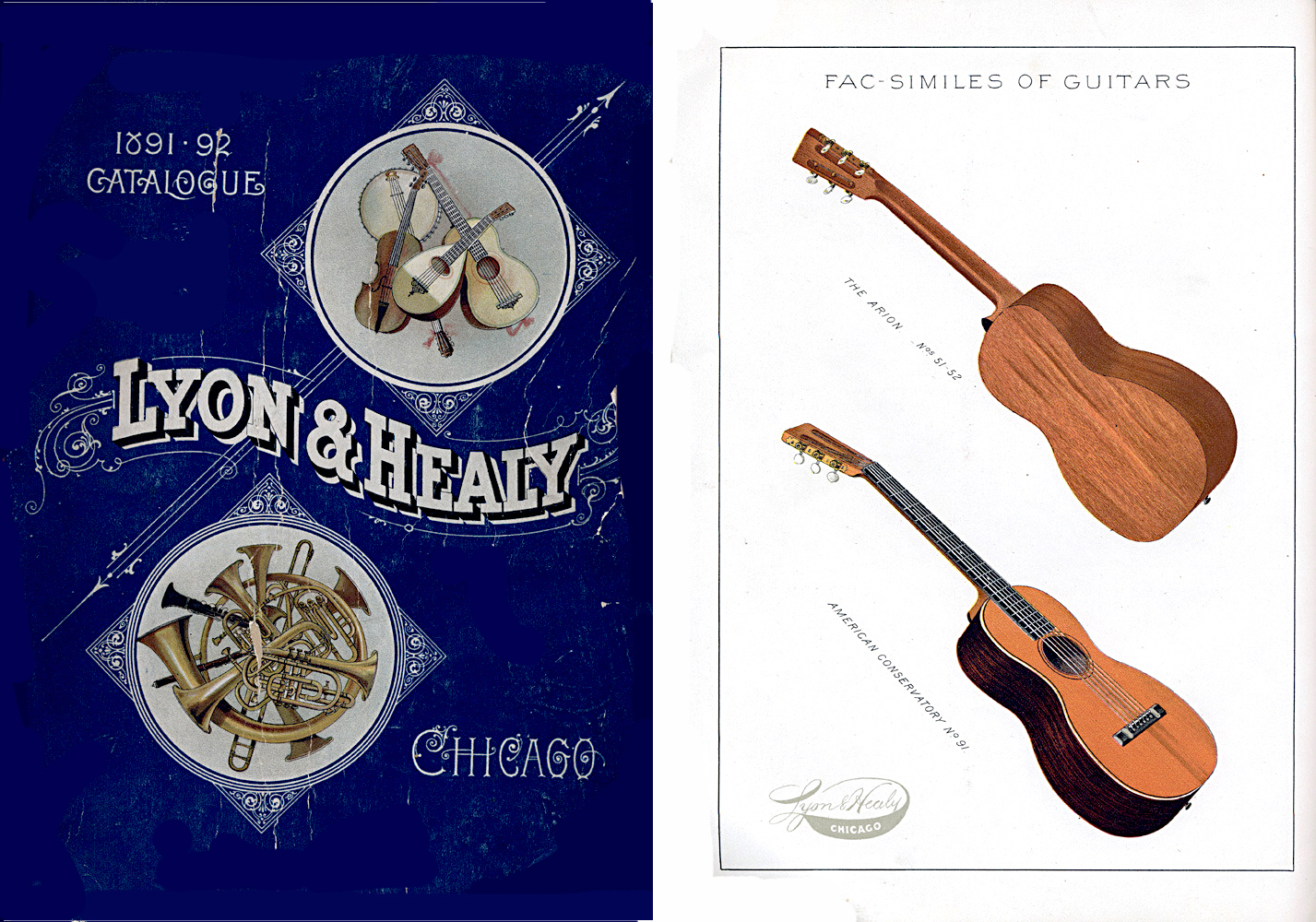 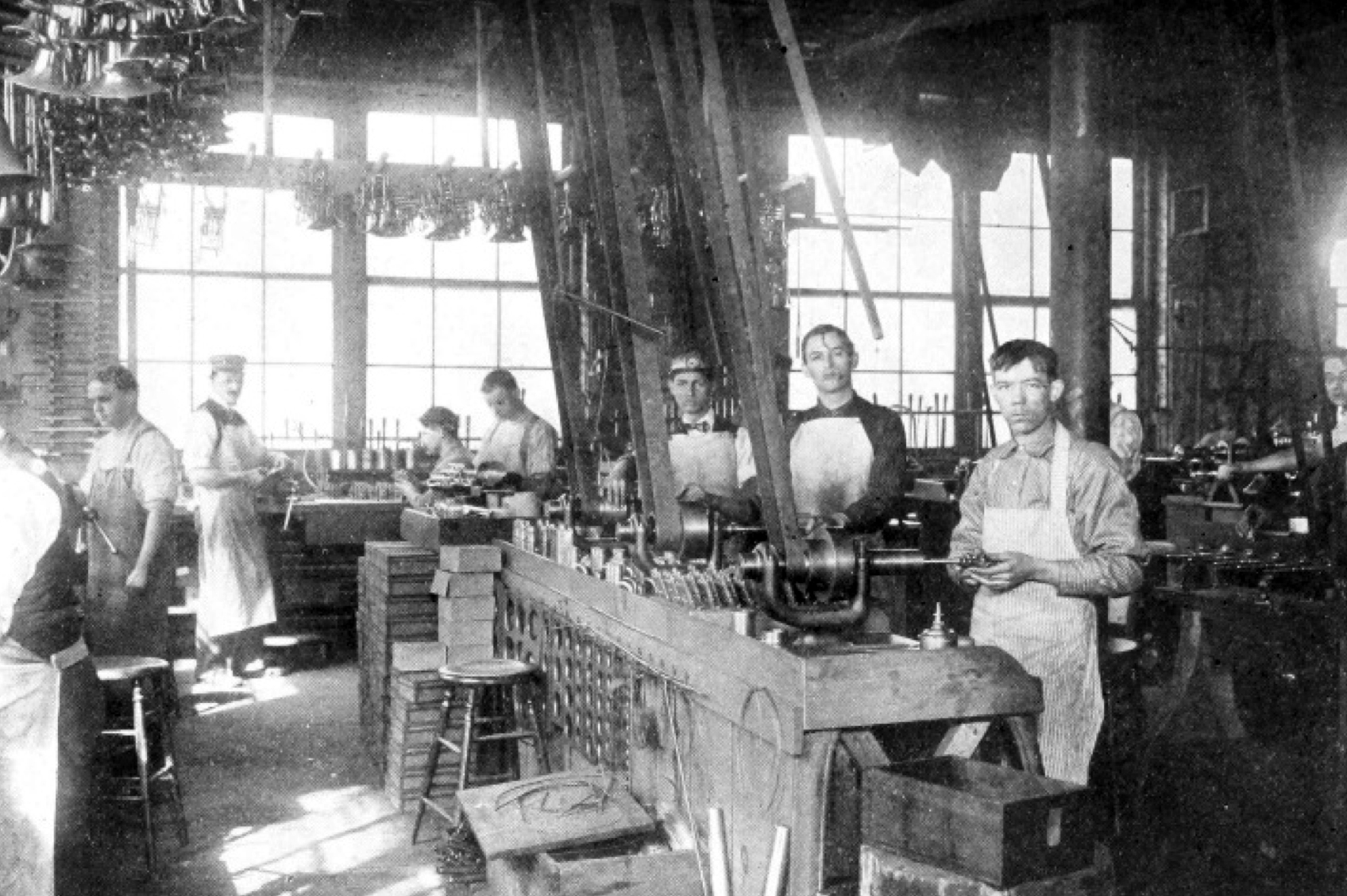 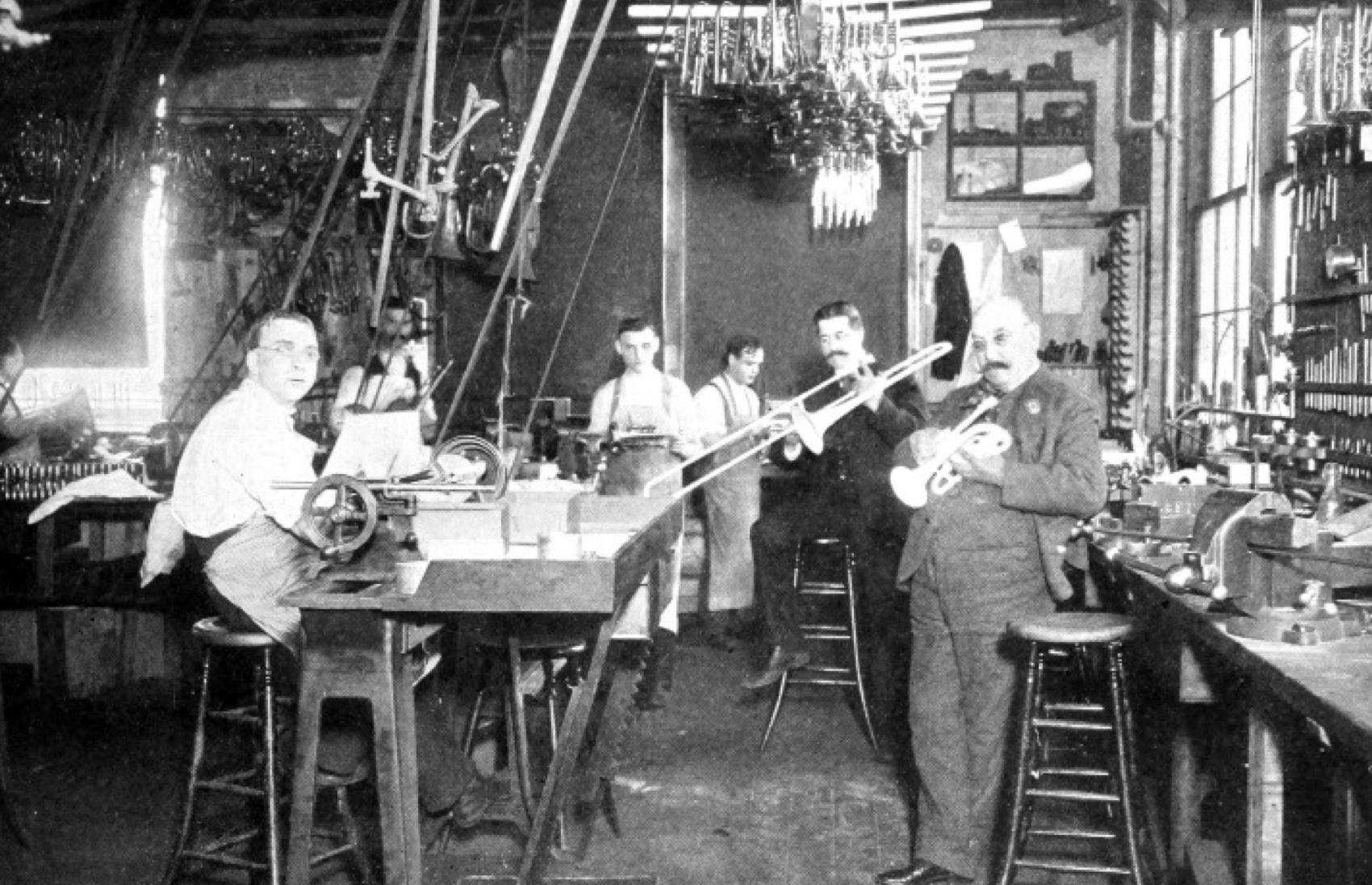 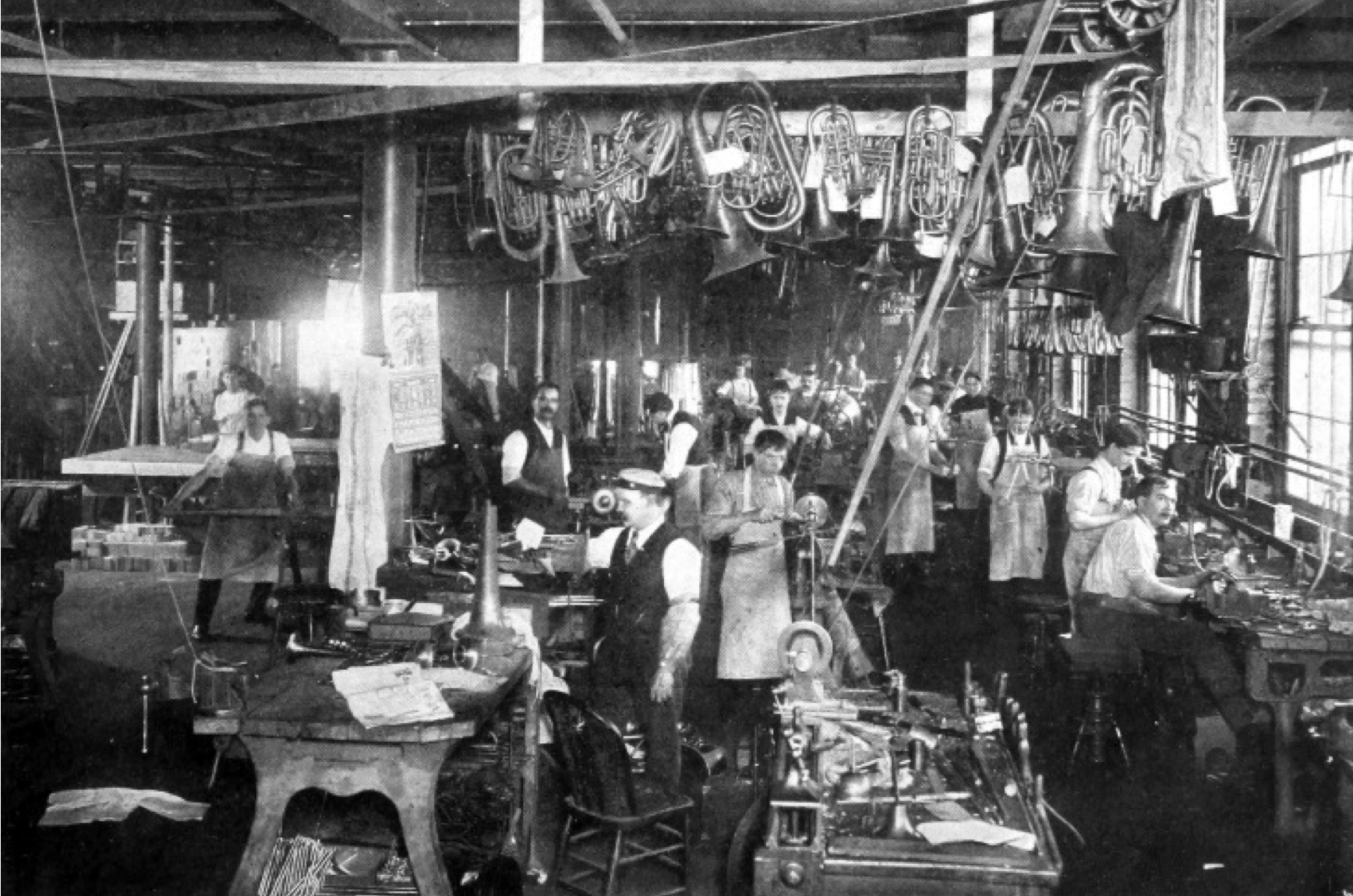 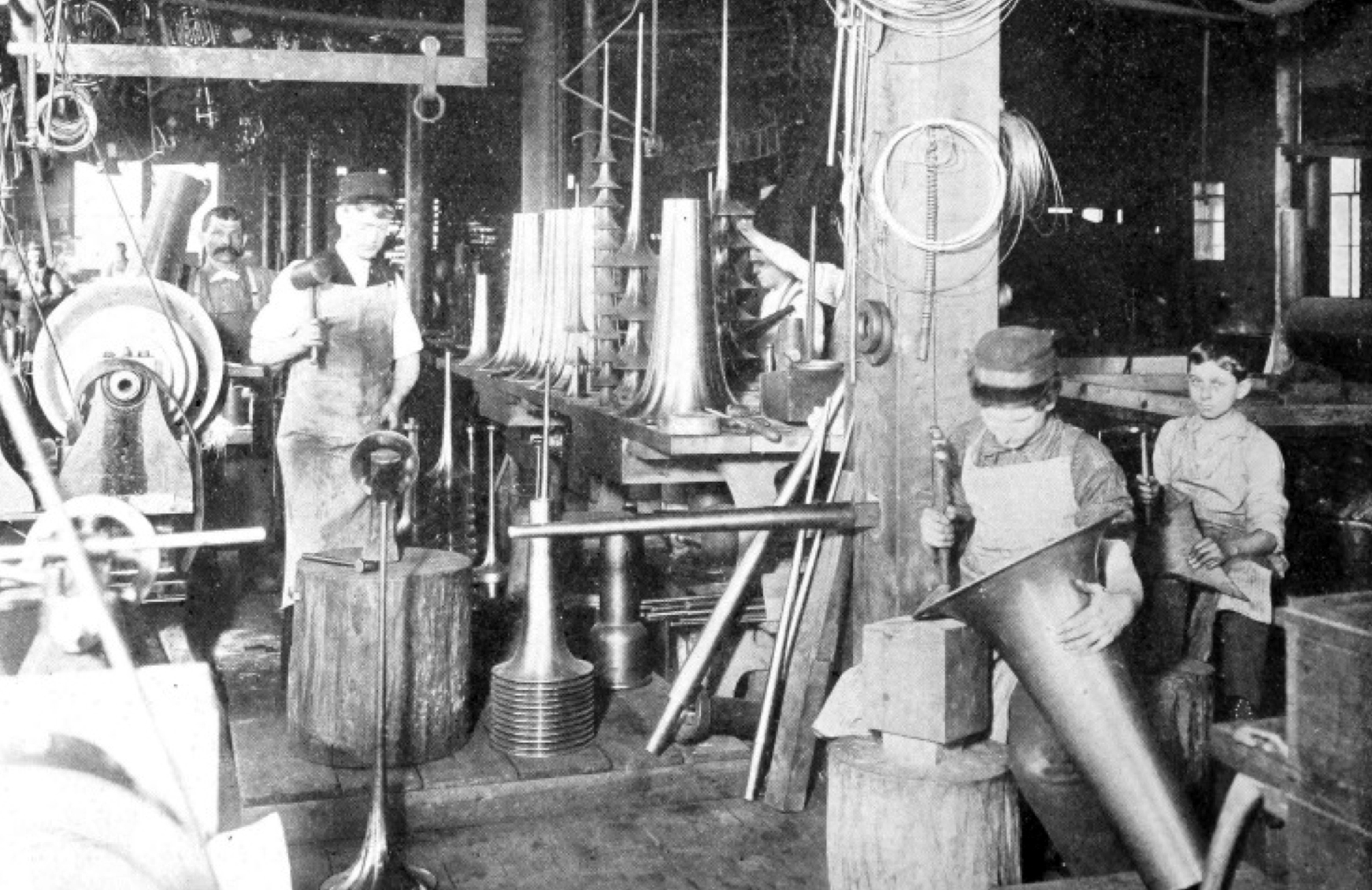 The manufacturing activities of Lyon & Heal are carried on in a large new fireproof factory building in Fullerton avenue about six miles from the downtown center of the city. Here are made the Lyon & Healy harps in their various styles, the Lyon & Healy piano in uprights, grands, and player pianos, Washburn pianos, designed pianos for export, a large variety of band, orchestral and other instruments and minor lines of musical merchandise. The ideas which characterize the house of Lyon & Healy are notablv dominant in the manufacturing department. 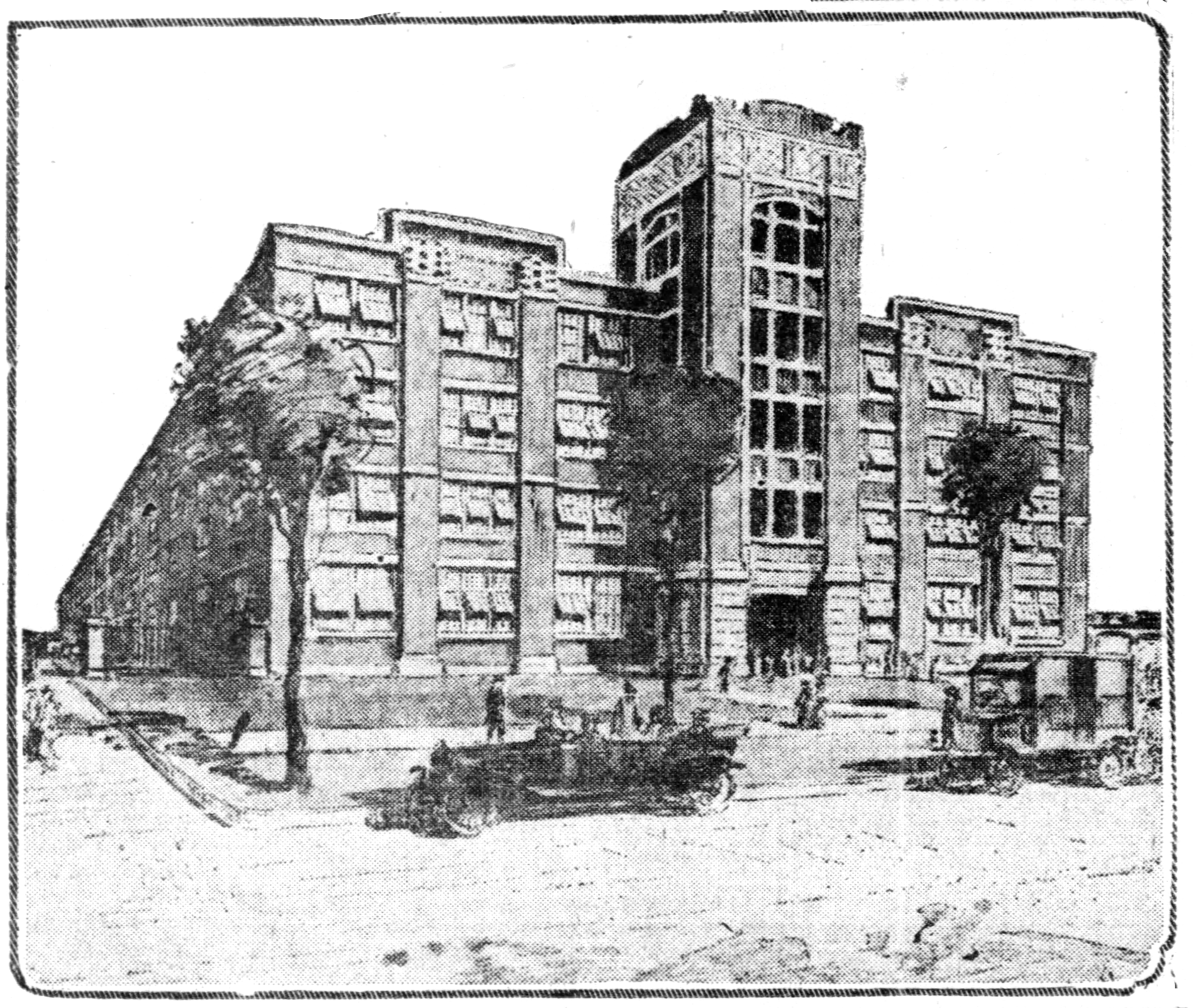