A New Hotel.
Last Friday morning The Tribune made brief mention of the fact that Mr. McCoy, of McCoy’s European Hotel, had decided to erect a new hotel at the corner of Van Buren and State streets, to be run on the same plan as that now controlled by him. Since that publication Mr. McCoy has been seen and the plans for the new structure have been viewed. The real projectors of this new and important hotel scheme are Mr. William McCoy, the present successful proprietor of McCoy’s European Hotel on Madison street, and Mr. M. A. Devine, one of the best known business men in the city. These gentlemen have leased from Messrs. Albert and Henry Keep the lot at the northwest corner of Clark and Van Buren streets, with a frontage ninety-five feet on the former and 108 on the latter. The lease is for ninety-nine years, the price for the first ten years being $7,000 per annum and for the remaining eighty-nine years $8,000 per annum. The lease also contains provision for fifty years additional at an annual rental of $12,000. Real-estate men who ought to be excellent judges express the opinion that this lease is exceedingly favorable one for Messrs. McCoy and Devine. Upon this fine piece of ground there will be erected (work to commence March 1, 1883), an eight-story brick or stone hotel, with basement, the entire structure to contain a total of 225 rooms. The first floor will be devoted to store purposes, four of which will be rented to suitable tenants, and two reserved for the use of the hotel restaurant and bar. The office will be on the second floor and will be reached by the main stairway in the centre of he Clark street front, also by a stairway from the ladies’ entrance on Van Buren street. As regards the location, it will, by the time it is completed, be fully as desirable and valuable as that of any hotel in Chicago. It will be in immediate proximity to the new Board of Trade, and within one block of the Rock Island and Lake Shore depot, the Grand Pacific Hotel, Post-Office, Custom-House, new union depot, and the finest office buildings in the city.

This seven-story chateauesque hotel was a favorite Irish gathering place. A 1897 renovation added steam heat, hot and cold running water, electricity, parlors, and a new lobby. Not to be caught off guard, this “dean of hoteliers” added boilers, dynamos and pumps in duplicate. When William McCoy retired in 1910, the name was changed to Hotel Victoria. The Chicago Stock Exchange Extension building occupies the site.

McCoy’s European Hotel (later known as the Hotel Victoria) is the best appointed and most elegant hotel west of New York, conducted exclusively on the European plan; and it is the only strictly first-class European hotel in Chicago. Its site was well chosen, being easily accessible from all parts of the city. It is just across the street from the Rock Island and Lake Shore Depot, and only one square away from the post office; and it is adjacent to the New Board of Trade and convenient to the large wholesale and retail stores and principal places of amusement and interest. The locality is improving with greater rapidity than any other portion of the city, and many massive and handsome business blocks have recently been erected in the neighborhood. The building is seven stories in height above the basement, and is crowned with three ornamental towers. It was designed by the well-known architect, Greg. Vigeant, is essentially fire proof, and is one of the best constructed and most substantial hotels in the world. The walls are of red pressed brick, and the columns, girders, towers, mansard, gables and stairways are all of iron.

There is a large double fire escape on each front of the building, immediately accessible from hallways on each floor, and each contiguous window is provided with a spacious iron balcony. And a complete iron stairway in the court in the rear, extending the entire height of the building, also affords easy means of escape in case of fire. The building has a frontage of 95½ feet on Clark Street and 110 on Van Buren, and a court in the rear separates it from all other buildings. There are 200 rooms for guests, and each apartment is luxuriously furnished, and provided with all modern conveniences. The finish of the first two stories is of hard wood—oak. The rotunda, in which is situated the office commanding a view of each entrance, is located on the second floor. 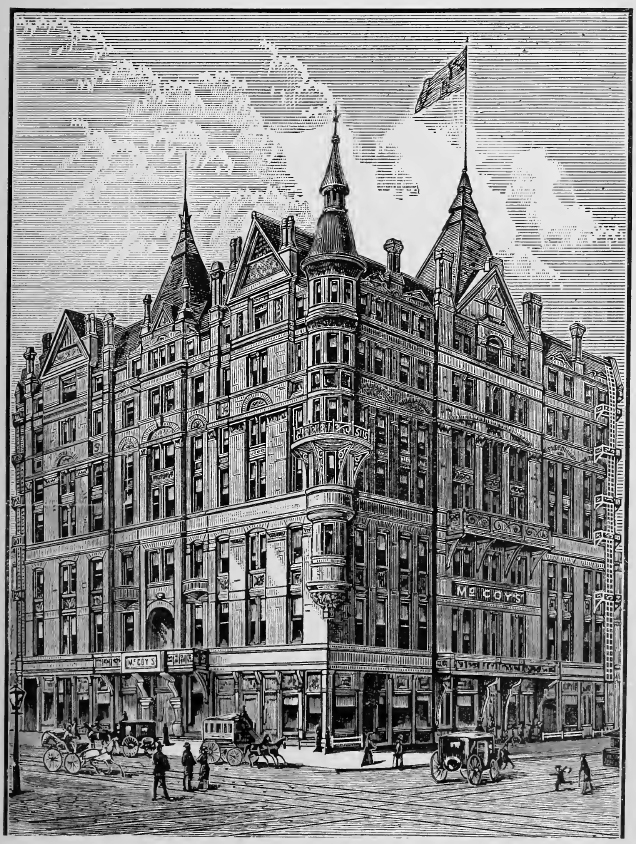 It is reached by wide stairways from both streets, and by a superb hydraulic elevator near the Van Buren Street entrances. The three main parlors and tie reception and club rooms are on the same floor, and all the rooms on the entire floor are so arranged that they can be thrown into one grand salon, at pleasure. The restaurant is on the first floor, and adjoining the grand dining-hall are convenient private dining and toilet-rooms. The Ave upper stories are divided into suites and single rooms, each with natural light and perfect ventilation, and a new and original system of alarms by which every guest may be immediately awakened, this being the only hotel in the world having this device. Everything seems to have been done to make the house homelike, comfortable and attractive.

The rates range from $1 a day upwards. The cost of the hotel was about $500,000. It was completed and opened June 1, 1884, and has rapidly grown in popular favor. Wm. McCoy is the sole owner and proprietor. The first McCoy’s Hotel was located at 140 and 142 Madison Street, and was originally called Burk’s Hotel. Mr. McCoy bought it in 1879, and afterward changed the name to McCoy’s Hotel. 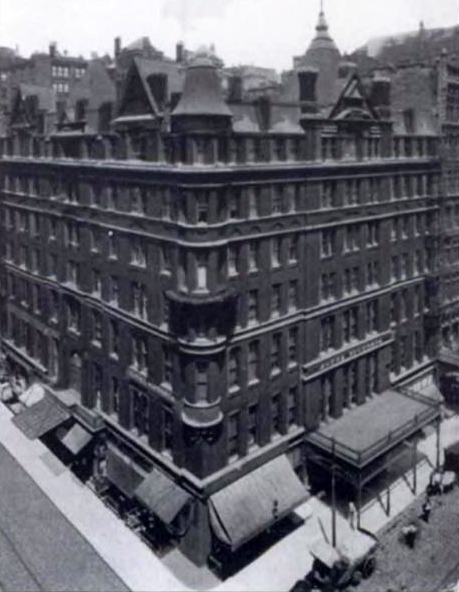 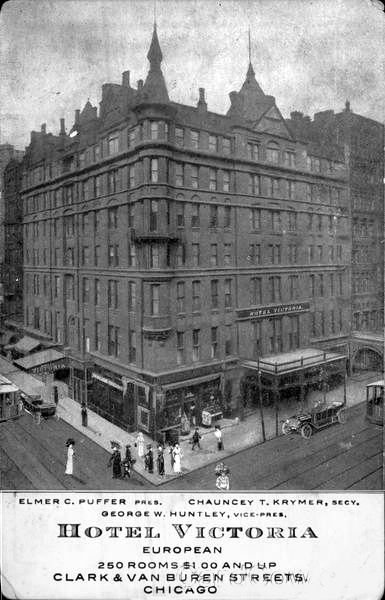 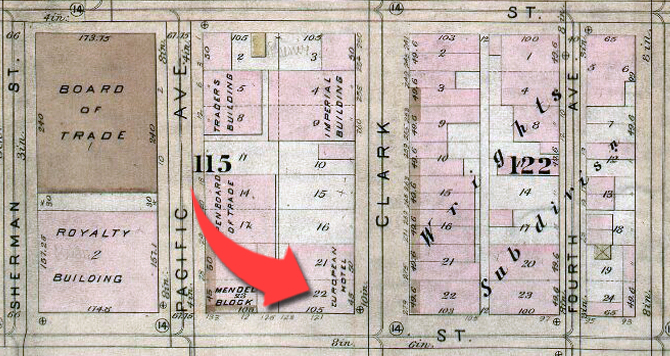 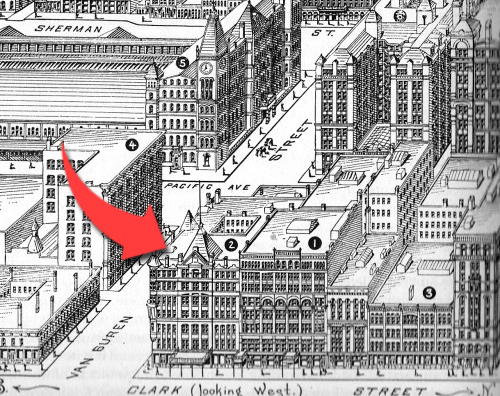