The Standard Guide to Chicago, For the Year 1892
Chicago Athenæum.—In the sumer of 1890 this honored institution, which has been justly called “The People’s College,” entered upon the most promising period of its history, at the opening of its Twentieth year. At that time the Board of Directors, composed of some of the best known and most influential citizens, with Ferd. W. Peck, Esq., as president, secured a valuable property 91×97 feet at 18 to 26 Van Buren St., one of the choicest locations in the city, which has been enlarged to a seven-story building and fitted up in the most attractive style, with all desirable conveniences. The property was purchased for $200,000, besides which $90,000 have been expended in the improvements. Situated in the very heart of the city, close to the Art Iustituie, and in the same grand square on which the Auditorium stands, it is destined to become a recognized educational center, and one , of Chicago’s most beneficent Institutions. The Athenaeum entered its new home in March, 1891. From the date of its organization in October, 1871, its animating spirit has been philanthropic. Though a private corporation, it has always maintained the Athenaeum solely for the public good, having been chartered as an institution not for pecuniary profit. The benefits that it has bestowed upon this city can not be overestimated. Open daily throughout the year, and five evenings a week for nine months of the year, with an able corps of twenty-nine teachers and a large list of studies—all elective— young men and women may enter at any time, without examination, and receive the desired instruction at moderate cost- Here everything is done by the superintendent and teachers, not enly to aid the pupils in the special branches that they have chosen but to stimulate a love for learning. To this end a well-chosen circulating library of good English literamie is maintained, containing books of reference in the arts and sciences, and an open reading-room with the daily and weekly papers, magazines and reviews.

During the fall and winter lectures on popular science, literatuie and applied art are given. In\ the same building an assembly hall has been provided, which will give far better facilities for such instructive lectures. 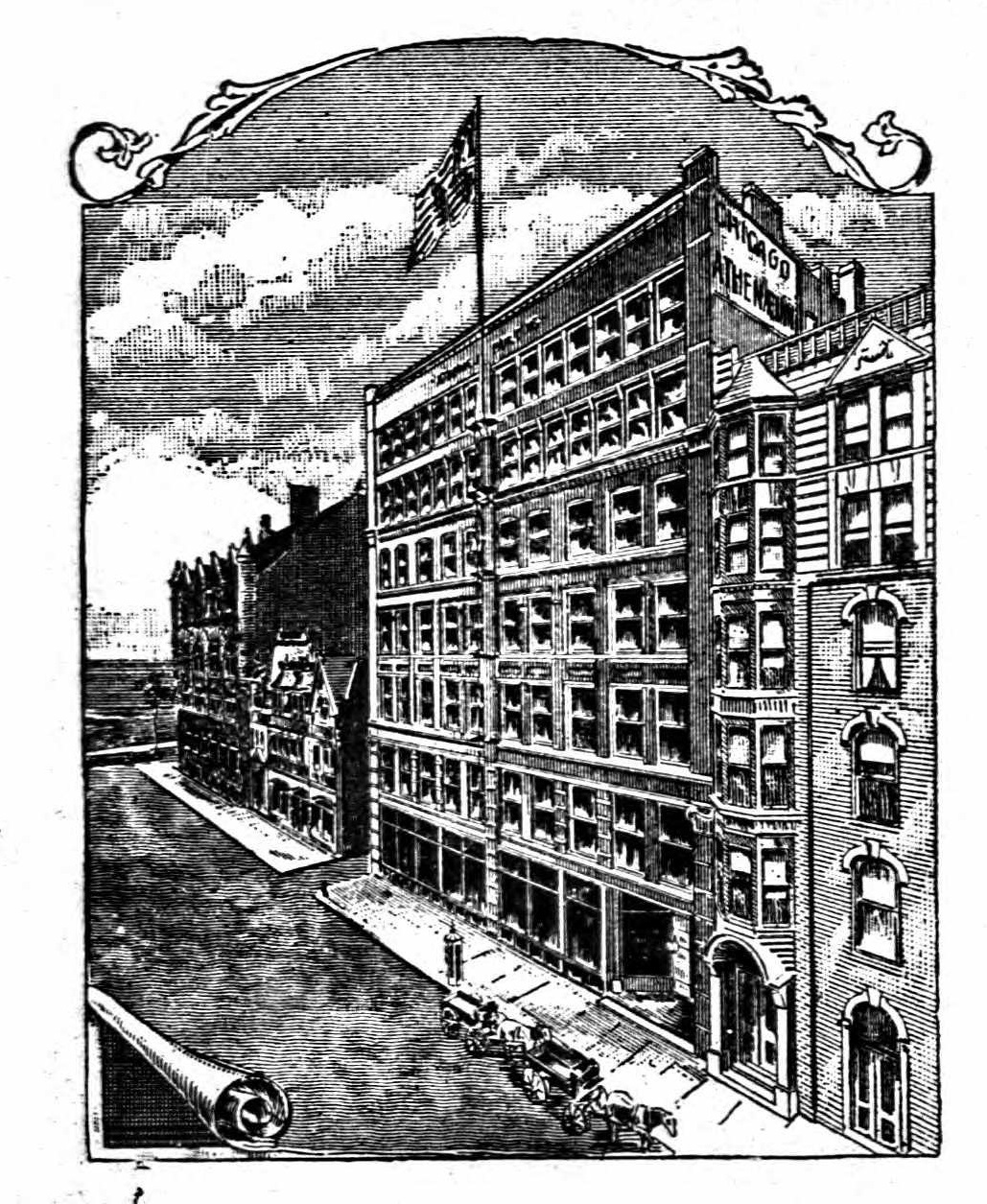 A room has been specially prepared to receive apparatus and chemicals for the illustration of lectures on natural philosophy and chemistry.

For the past fifteen yearsthe Athenaeum has been closely allied with the Chicago Mechanics’ Institute, organized in 1843, of which Geo. C. Prussina;, Esq., is president, and has done all its educational v\oik. The liberal advantages of the Institute are extended to indigent mechanics or their children, on written application, duly vouched for. Many a worthy young mechanic or citizen has thus secured, through the Athenaeum evening classes, such thorough instruction in mathematics and drawing as to gain for him promotion in his trade, as an intelligent and practical foreman or a masterbuilder.

While the greater importance in this ‘ People’s College” is attached to the fundamental branches whose utility is everywhere acknowledged, valuable service is also rendered to young women who desire to quality themselves for teachers in the public schools, or to pass the examination 1oi still higher grades, by giving them able instruction in advanced mathematics, physics and the natural science. Here also young men may receive special instructions in science, the classics and French, German or Spanish, to enable them to enter any college in the land. The new “Atheraeurn Building” is a substantial and commanding edifice constructed of pressed brick and stone. It is 91×97 feet and seven stories high. Special attention here is given to securing abundant light and good ventilation not only by means of numerous broad windows, those in front beingplate glass, but through two large light-wells down through the entire building. A broad entrance and hall with handsome marble pavement and side walls leads to two large electric elevators, the first of this kind introduced into Chicago, by W. E. Hale & Co., and to a broad iron and marble stairway leading to the seventh story.

The upper story has been elaborately fitted up with sixteen or eighteen studios for the special accommodation of artists. The fifth and sixth floors are devoted to spacious and beautiful class-rooms, an assembly hall, library and reading room, the business office and superintendent’s private office. Other rooms below are occupied by literary, philanthropic and educational associations.

A larger and finer ” Athenaeum Hall,” with a seating capacity of 400, has been opened on the second floor, and is often used for concerts and lectures. With the exception of the broad entrance hall leading to the elevators, the entire first story and basement have been made into the most spacious and fairly-appointed Gymnasium in this city, with a height of 26 feet. The east half is devoted to the gymnasium proper, handsomely frescoed and furnished with the best apparatus that can be obtained. Thirteen feet above the floor is a suspended and well supported running track, 5 feet wide. The ceiling is finished in heavy hard wood panels, and admirably adapted for suspended rings, ladders, climbing ropes, etc. The west half is occupied by a splendid racket alley (or hand ball court), 65×23 feet, with cement walls; a plunge bath lined with English porcelain, 18×28 feet and 7 feet deep; fifteen shower baths and four porcelain tub bath rooms. Along the entire front runs one of the best standard bowling alleys, being partly under the sidewalk and well lighted. Thus generously equipped with apparatus, and with spacious and handsome educational departments, the Chicago Athenaeum is destined to become one of the most attractive institutions for mental and physical culture of any city in the land. The names of the officers and directors of the Chicago Athenaeum are a sufficient guarantee of its high standard and useful
aims. Ferd. W. Peck, president; Wm. R. Page, first vice-president; Harry G. Selfridge, second vice-president; John Wilkinson, secretary and treasurer; Edward I. Galvin, superintendent in charge. Directors: Henry Booth,\ Franklin H. Head, Lyman J. Gage, Wm. J. Chalmers, Husrh A. White, Joseph Sears, Ferd. W. Peck, Chas. J. Singer, Wm. R. Page, A. C. Bartlett, J. J. P. Odell, Alex. H. Revell, John Wilkinson, Harry G. Selfridge, H. H. Kohlsaat, Gilbert B Shaw. Under the guidance and government of these publics pirited citizens, this time-honored institution will ever keep in the line of progress, in promoting the interests of practical education.