The first Coliseum, built near the site of the World’s Fair, was impressive in size for its day, twice as large as the second Madison Square Garden; its interior was supported by 12 massive arches, 100 feet high with a span of 230 feet. There were seven acres of interior floor space.

On August 21, 1895, during construction of the new Coliseum, the big cantilever roof arches collapsed caused by defective bracing and careless builders.

The side walls were to be forty feet to the cornice line, of buff brick, pierced by fifteen-foot arched openings, filled with glass. In the center of one side was to rise a graceful campanile 240 feet high and thirty-six feet square provided with elevators and to be used as an observatory. In the topmost story there was to be a café and music hall. At the pinnacle a huge electric searchlight was to be installed. Around the roof a roof garden thirty-six feet wide was designed.

The mezzanine stories and roof garden spaces were to add two and one-half acres to the available area. The seating capacity was calculated at 40,000.

The construction, according to the plans, was to be entirely fireproof—steel, brick, and glass being the materials to be used. The great roof was to be supported by a series of great steel cantilever arches.

The interior plans provided for a clear central arena 225 feet wide and 602 feet long, surrounded by a thirty-eight foot promenade. Beyond and around this promenade the permanent seats and arena boxes were to be built. The promenade might might in case of need be fitted with and boxes also. The arena was to be divided so that a space of 400 feet by 225 feet could be devoted to the circus. In this arena three rings, two elevated platforms, and a carnival water pool were to be installed.

Twenty-four feet above the lower boxes was to run a thirty-eight foot wide gallery, giving a splendid view of the whole arena. A second ten-foot promenade was to run sixteen fieet higher up. The arches were eight feet in clear height.

The building was to have been opened Sept. 2 by the Barnum & Bailey circus and next Monday a large part of the should have been turned over to that company. 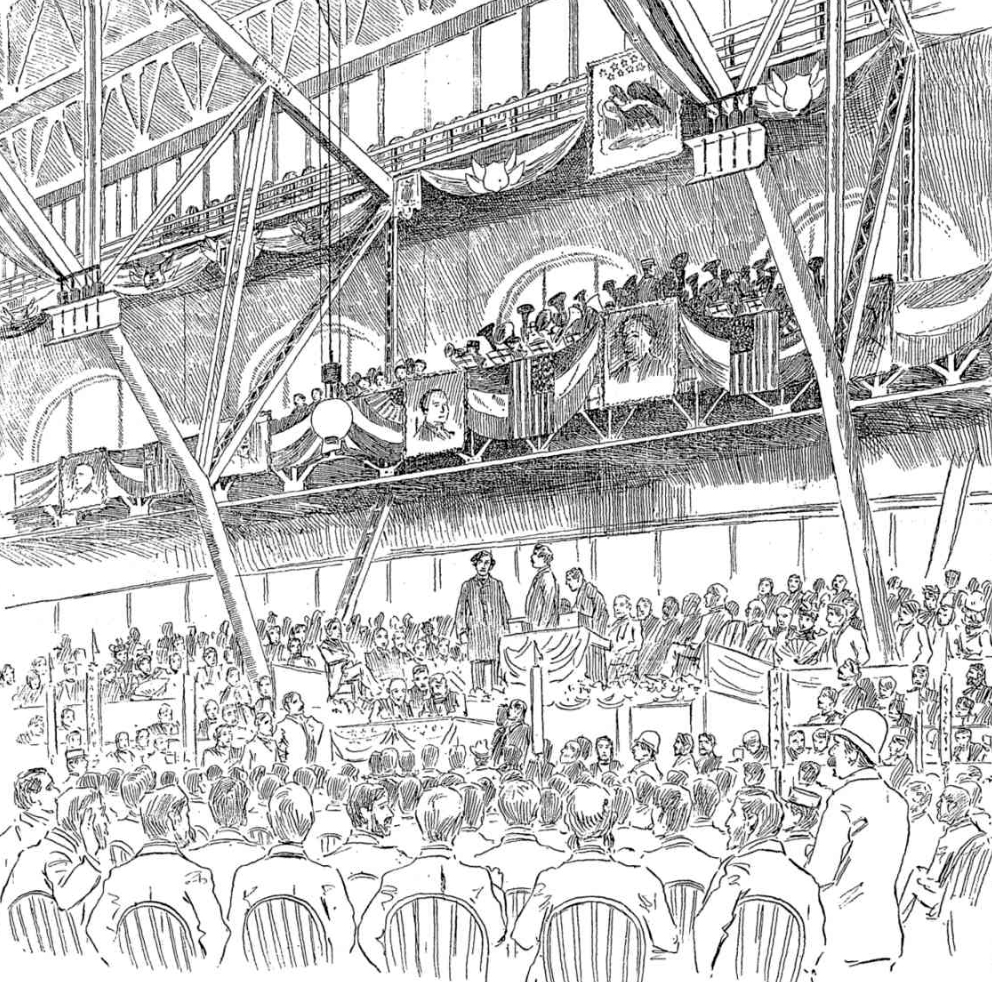 The most famous speech in American political history was delivered by William Jennings Bryan on July 9, 1896, at the Democratic National Convention in the Coliseum. The issue was whether to endorse the free coinage of silver at a ratio of silver to gold of 16 to 1. (This inflationary measure would have increased the amount of money in circulation and aided cash-poor and debt-burdened farmers.)

In October 1896 the Coliseum hosted the Barnum and Bailey Circus, the largest three-ring circus in the country.

Unfortunately on December 24, 1897, around 6:00 PM, during the Manufacturers’ Carnival and Winter Fair, after many visitors had left the exhibit for supper, a fire broke out and swept through the building. Despite initial reports of numerous deaths, only one fireman died. The building was completely destroyed, primarily when one of the 14 arches supporting the roof fell over to bring down all the other arches like a row of dominoes. The fire consumed the building within twenty minutes. This massive structure, one of the greatest indoor facilities of the nineteenth century, had a lifespan of only 19 months.

The inferno was considered so great that nothing like it was seen since the buildings of the World’s Fair were burned down.