BEAUTIFUL architecture, which has its inspiration in early Italian renaissance, is strikingly displayed in the Hall of Mines and Mining, and with which sufficient liberty is taken to invest it with the animation that should characterize a great general Exposition. It is located at the southern extremity of the western lagoon or lake, and between the Electricity and Transportation Buildings. The architect is S. S. Beman, of Chicago. There is a decided French spirit pervading the exterior design, but it is kept well subordinated. In plan it is simple and straightforward, embracing on the ground floor spacious vestibules, restaurants, toilet rooms, etc. On each of the four sides of the building are placed the entrances, those of the north and south fronts being the most spacious and prominent. To the right and left of each entrance, inside, start broad flights of easy stairs leading to the galleries. The galleries are 60 feet wide and 25 feet high from the ground floor. The main front looks southward on the Central Court, and northward on the middle lakes, and an island gorgeous with flowers. Between the main entrances and the pavilions are richly decorated arcades, forming an open loggia on the ground floor, and on the gallery floor level a deeply recessed promenade, which commands a fine view of the lakes and islands to the northward, and the great Central Court on the south. These covered promenades are each 25 feet wide, and 230 feet in length. 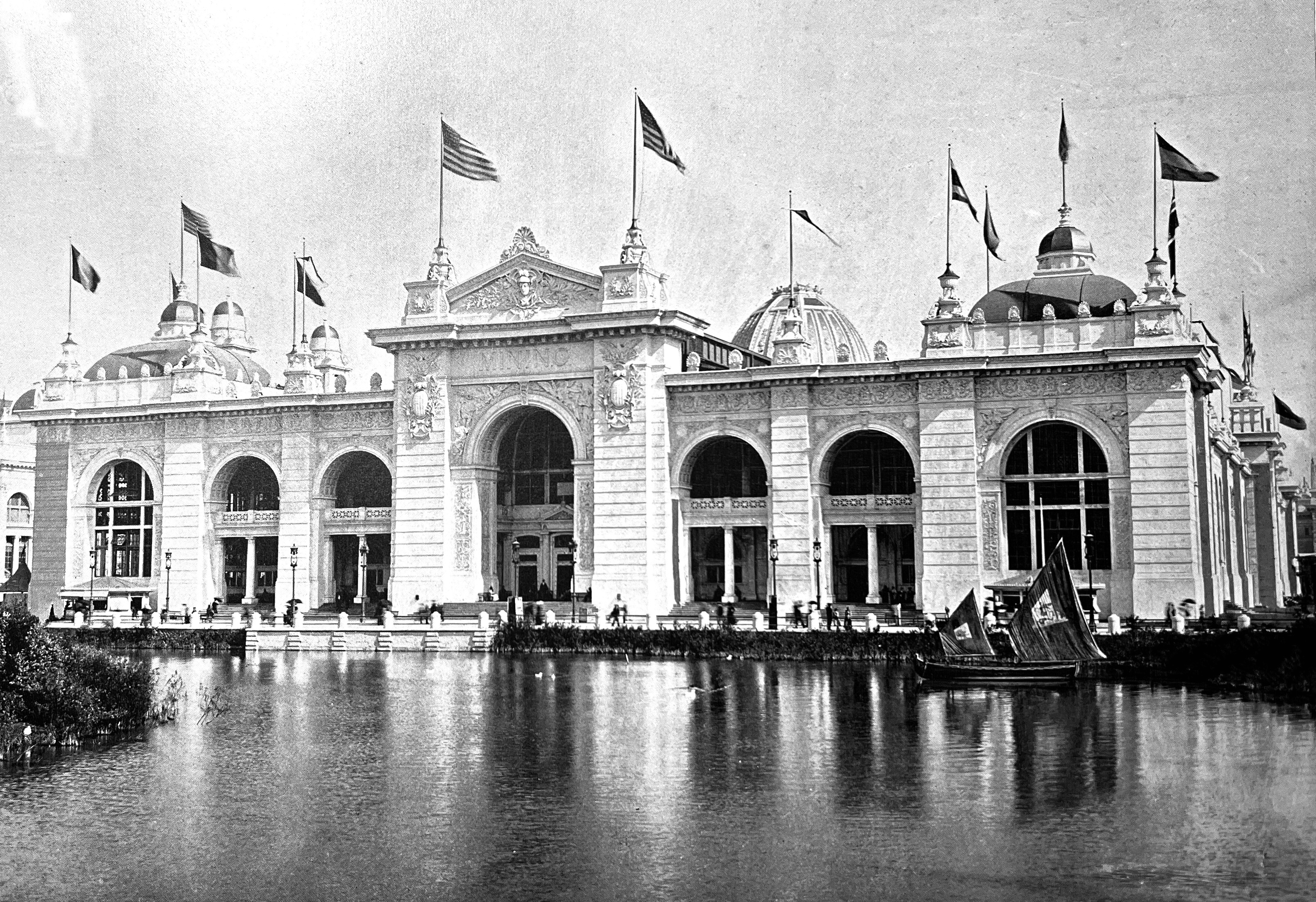 Entering the building, the visitor finds a capacious hall 700 feet long and 350 feet wide, covering over five and a half acres, or 345,000 square feet. The entire expanse of roof, which is mostly glass, is so suspended as to leave the central portion clear and unobstructed, the sole support being two rows at the side of huge steel cantilever trusses. This is the first example of the successful application of the cantilever system to roofs, and may be said to mark an era in roof construction. 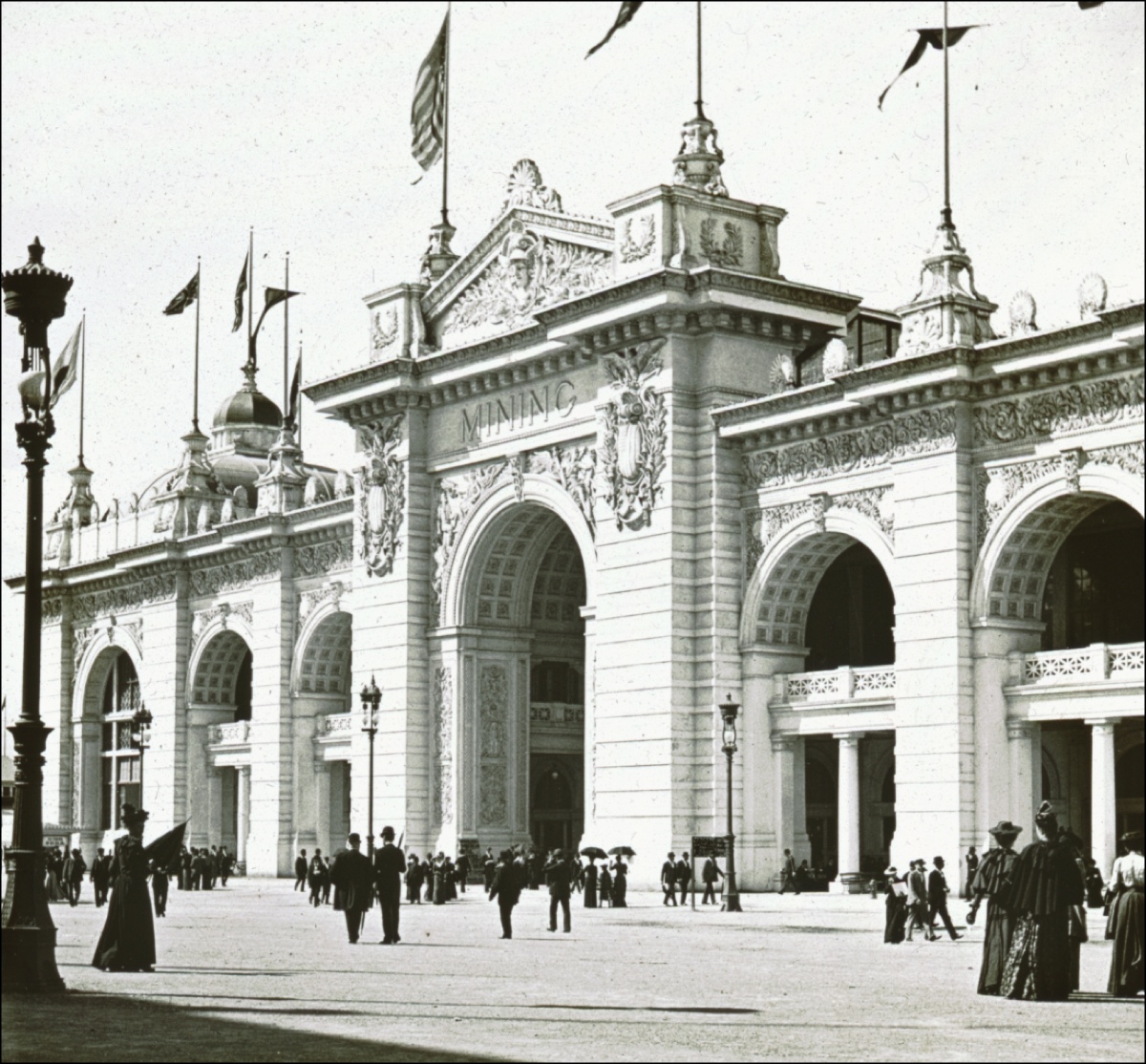 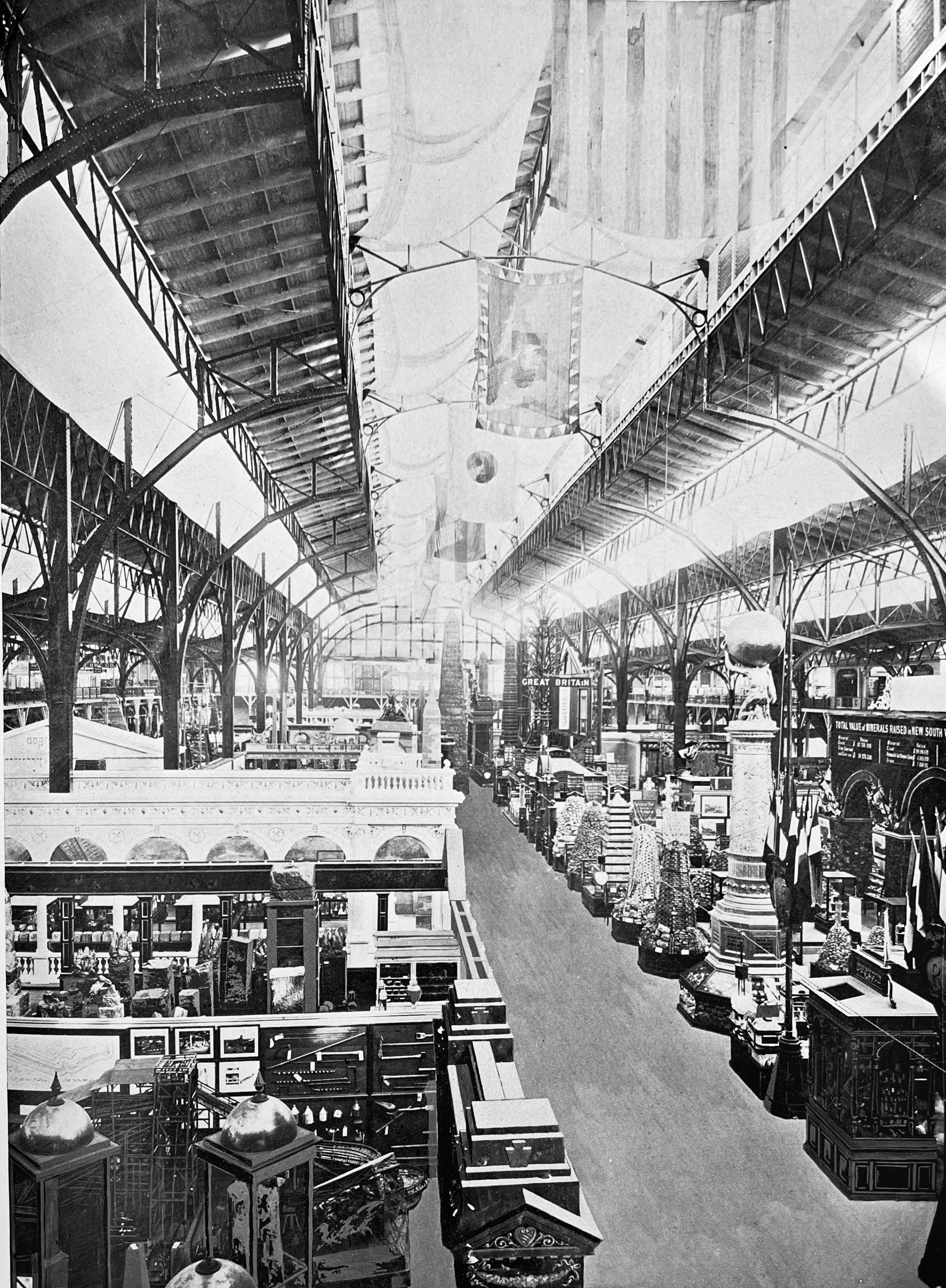 Passing from tire main railway terminus, the visitor observes on his left a building of elaborate design, the purpose of which is indicated by the single word inscribed above its portal. In this, the hall of Mines and Mining, its architect, S. S. Beman, of Chicago, has departed somewhat from conventional types, displaying, without any detraction from his harmony of plan, an adaptation of structural forms to practical uses in perfect keeping with what may be termed the sentiment of his composition. Fronting on the main court opposite the great hall of Machinery; flanked on one side by its sister edifice devoted to the Electrical department; on another by the transportation pavilion, and with the graceful lines of the Administration building giving further emphasis to this imposing group, Mr Beman was thus favored with one of the choicest sites in the Exposition grounds, and to the best advantage has he improved his opportunity.

First of all it may be observed that in studying his design the artificer must prepare for the housing of a large and bulky display of ores and minerals, of mining and metallurgical machinery and appliances, many of them requiring a liberal proportion of floor room and height. Hence, in this building, and especially in its central nave, it was necessary to avoid, as far ar as possible, all columnar obstructions, leaving unencumbered the greatest available area for the reception of exhibits. Of the space at his disposal, including with galleries somewhat less than nine acres, a large portion was devoted to a nave 630 feet long, in its centre a circular court from which the main avenues radiate, and where is a design typical of mining industries. In all this spacious nave there are only sixteen pillars, eight on either side, and on which nests the system of cantilever trusses that support a lowered roof, fashioned largely of glass, and at its highest point nearly 100 feet from the floor. The aisles, which divide the building into four main sections, are similarly treated, and with their columns anchored against the inner rows. Thus is relieved the comparative depression of the curtain walls, whose height from ground to cornice is little more than sixty feet.

A further accentuation is given by the principal entrances, one in the centre of each of the four sides, those on the north and south 80 feet wide, with richlv decorated cornices, and flanked by pilasters, on which rest banner staves, their flags imparting to the outline somewhat of a holiday appearance, and modifying the serious aspect of the design. Around all the entrances are monuments, designs, and figures in keeping with the exhibits contained within. At the corners are square pavilions, lighted by arched windows on either face, and with low domical roofs crowned with circular lanterns. Between these pavilions and the main portals are piazzas 25 feet wide, with coffered ceilings, and from which there is access to the interior at several points, from either side of the entrance-halls broad stairways lead to windowed galleries, 60 feet wide, and affording an additional floor space of more than 100,000 square feet. Thence, from numerous openings, the visitor may step forth into recessed balconies, from portions of which is an excellent view of tin structures and grounds adjacent.

In the elaboration of his design the architect has not adopted any special order of architecture, for in doing so he could not have given to his scheme an architectural expression in conformity with the character of the exhibits. The facades are of modern style; the roof planned somewhat after the fashion of those which cover the car-building sheds of the Pullman company. Elsewhere, and especially in the entablatures, are traces of Italian detail, mingled with that of the French renaissance, while in the loggias and balconies the treatment savors of the Doric and the earlier Romanesque. Finally it may be said that, whether from an architectural or utilitarian point of view, the hall of Mines and Mining does not suffer by comparison with its more imposing neighbors. 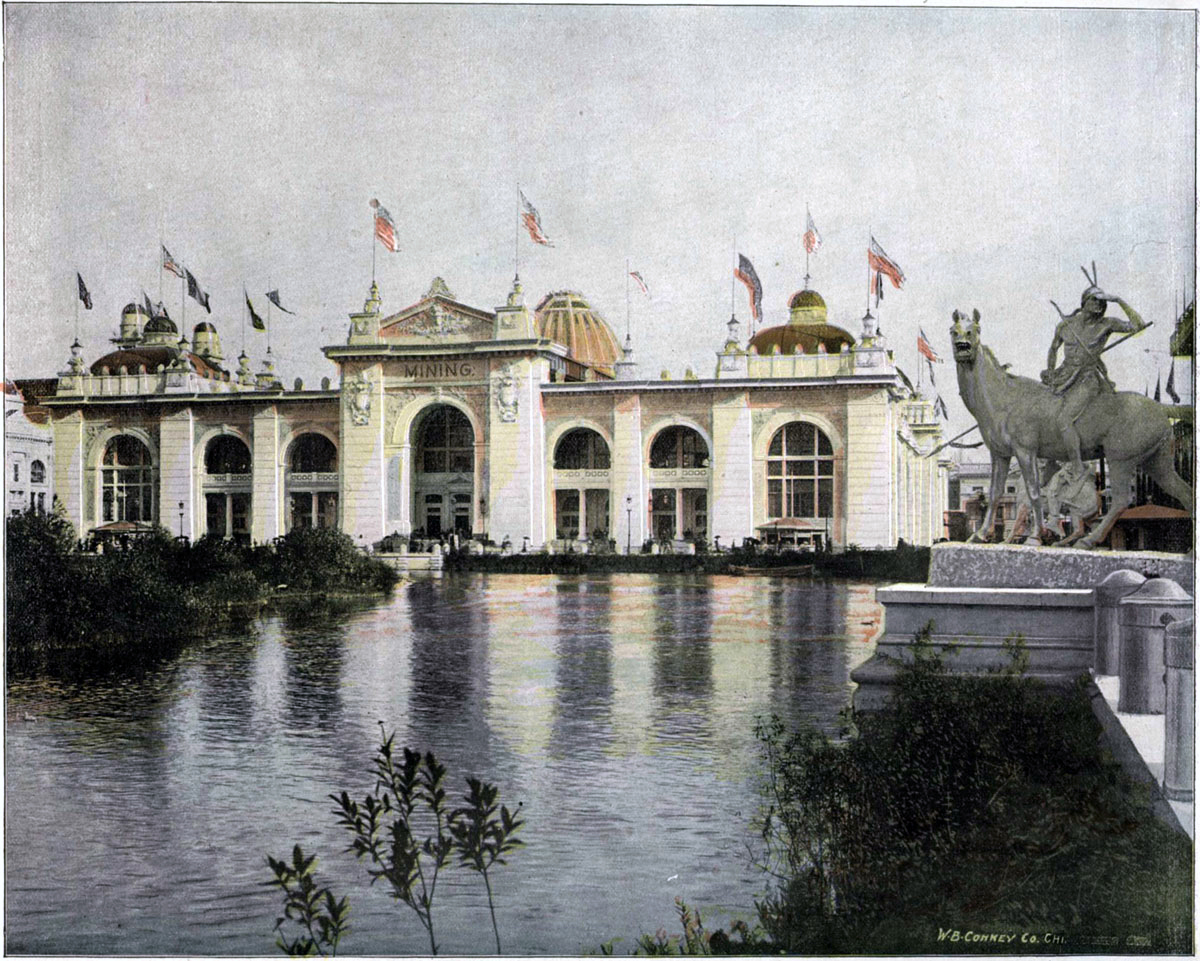 THE MINING BUILDING.—This imposing facade illustrates the massive and graceful proportions of the Mining Building. The grand central arch, one hundred feet high, and the domed pavilions at either corner are supported by heavy pilasters of granitoid blocks, suggestive of great solidity. The lofty bays, the recessed balcony with pillared support, the elaborate frieze, the architectural reliefs, the bannered flagstaffs, give the finishing touch of beauty to simple strength. The great floor space is seven hundred by three hundred and fifty feet m area including a space of five and one-half acres. The dome of Administration, in the rear, and the towers of Electricity to the left, give an exalted sky relief and indicate the relation of this to the other edifices of the Central court. At the left appears the verdure of the water-bound and wooded islands—the centerpiece of the Exposition landscape. The continuous fringe of green at the water’s edge is broken by the pedestals of the statuary in the immediate foreground. The projecting cornice above the horse is all that is visible of the Golden Door to the Transportation Building. The equestrian groups are fitting accessories of the scene. Their spirited energy and the expressive, life-like attitudes of horses and riders won the praise of eminent sculptors. The frontier and mountain life they represent is intimately associated with the development of the industry to which the great edifice in front, with its abundant wealth of mineral, ore and metal is dedicated. 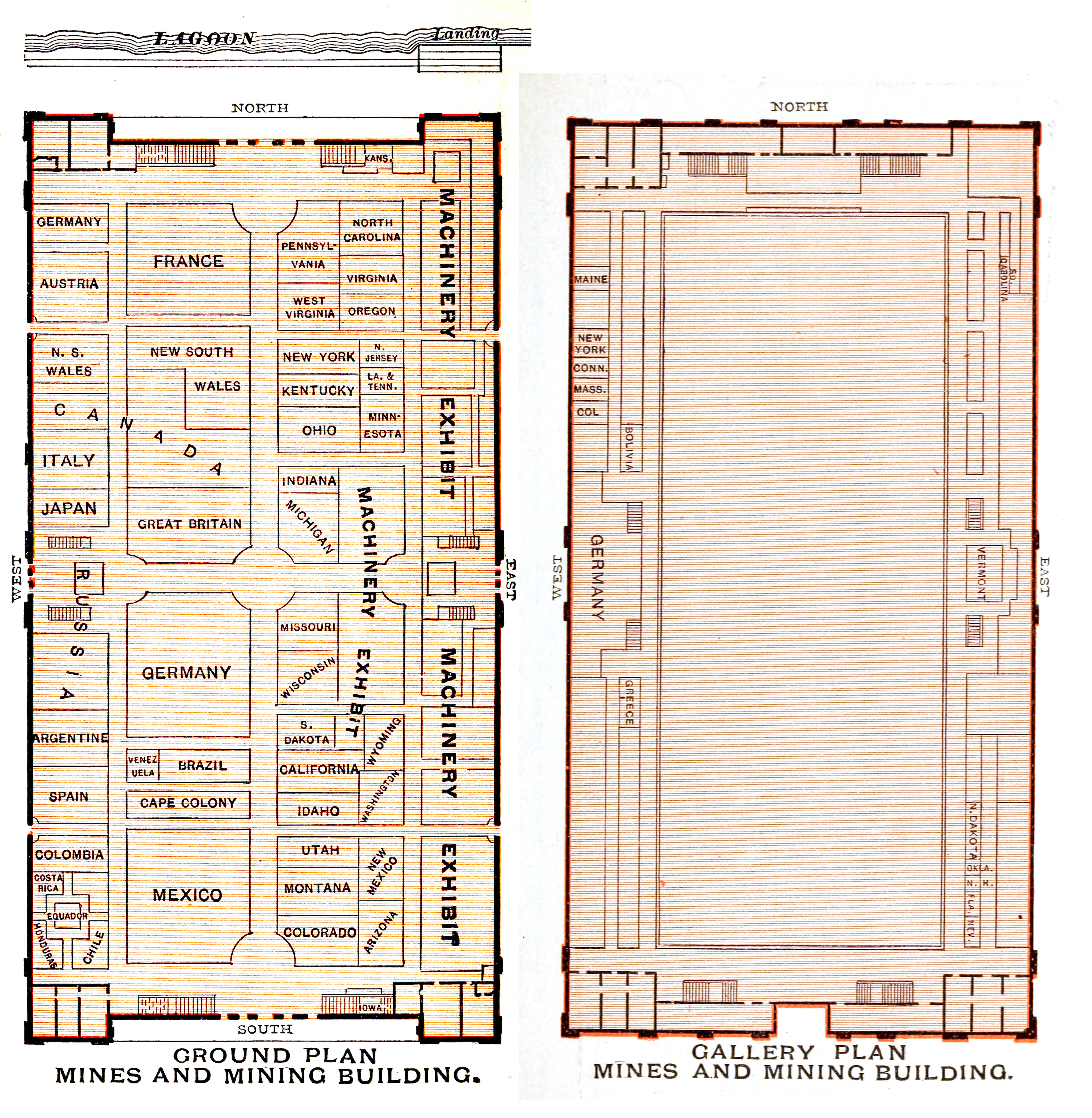 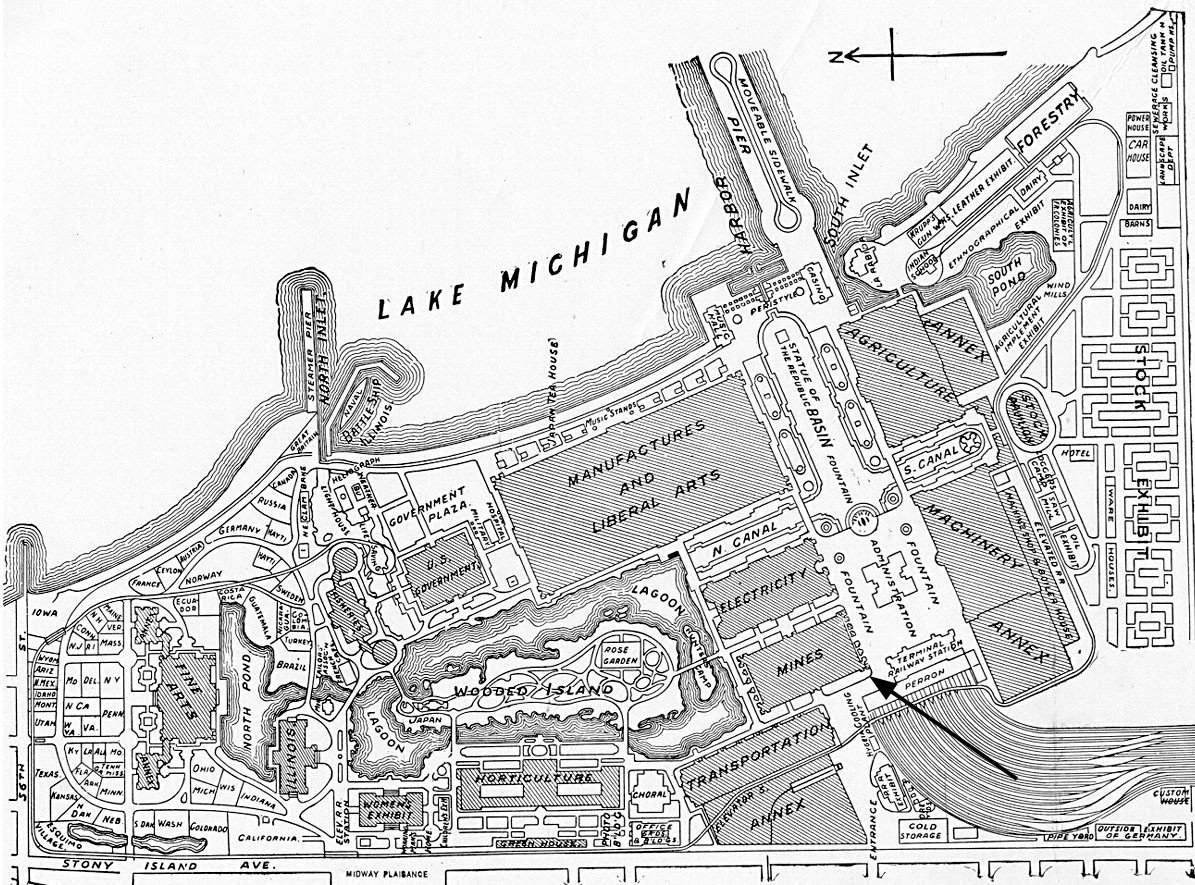