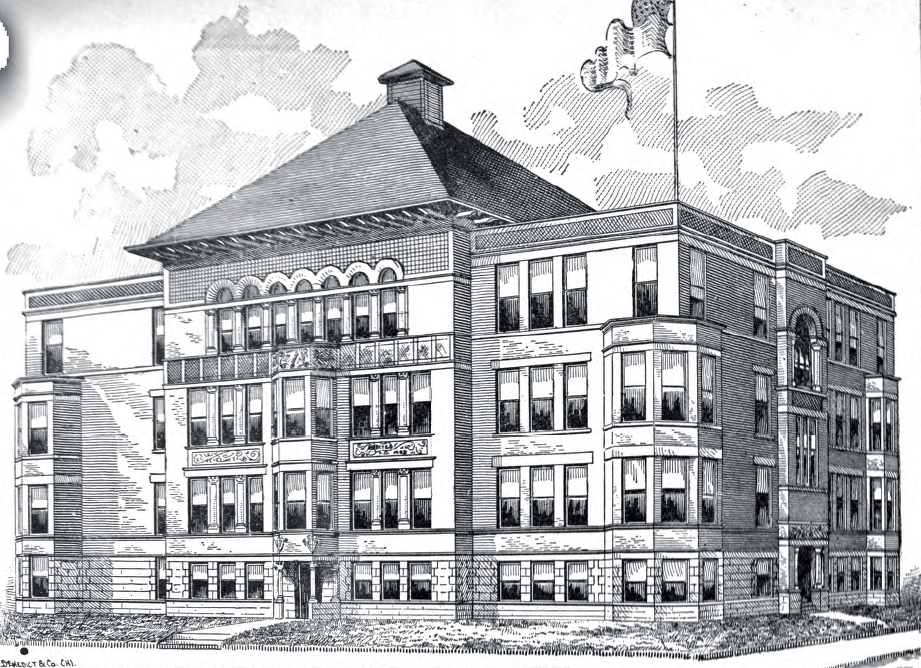 In the 1860s, soon after suburban Lake View constructed its first public school, residents began calling it the Dummy Road School. The nickname referred to the “steam dummy” that ran on the streetcar line along Broadway Avenue (then called Evanston Avenue). At that time, railroad engines were often disguised to look like passenger cars to avoid frightening horses. When the burgeoning city of Lake View was annexed to Chicago in 1889, Dummy Road School was overcrowded. Chicago Board of Education Architect John J. Flanders then began planning a new building that would be constructed to the east and connected to the original structure.

Construction of the sixteen-room building began in 1892. When it opened the following fall, the handsome red brick structure—one of the last designed during J. J. Flanders’ tenure—was considered one of the finest schools in Chicago. The building’s rhythmic facades have projecting bays and polygonal forms. Bands of rectangular windows are divided by engaged Ionic columns. Carved limestone details with foliage motifs also embellish the building.

The Board of Education named the new school in honor of Louis Nettelhorst (1851–1893), “…one of the most popular German-Americans of Chicago.” Proud of his heritage, Nettelhorst had been president of German Turngemeinde, an organization devoted to gymnastics as well as politics, and a member of the Germania club and the German Press Club. He served on Chicago’s Board of Education for seven years, at a time in which hundreds of thousands of Chicagoans had either emigrated from Germany or were the children of immigrants. German language had been taught in the Chicago Public Schools for decades; however, it had long been a controversial subject. Soon after Nettelhorst died in 1893, there was a recommendation to eliminate the study of German from the curriculum. After passing a resolution that expressed grief for the loss of Nettelhorst, several board members “took their hats and walked out.” With no quorum, “German was saved to the public schools again.”

In 1911, the Board of Education razed the old Dummy Road School and replaced it with a sensitively designed addition to Flanders’ original Nettelhorst School building. Arthur F. Hussander designed this addition. Another addition was constructed in 1937. Later, a large three-story wing was also added to provide additional classrooms allowing for an enrollment of more than 2,200 students.