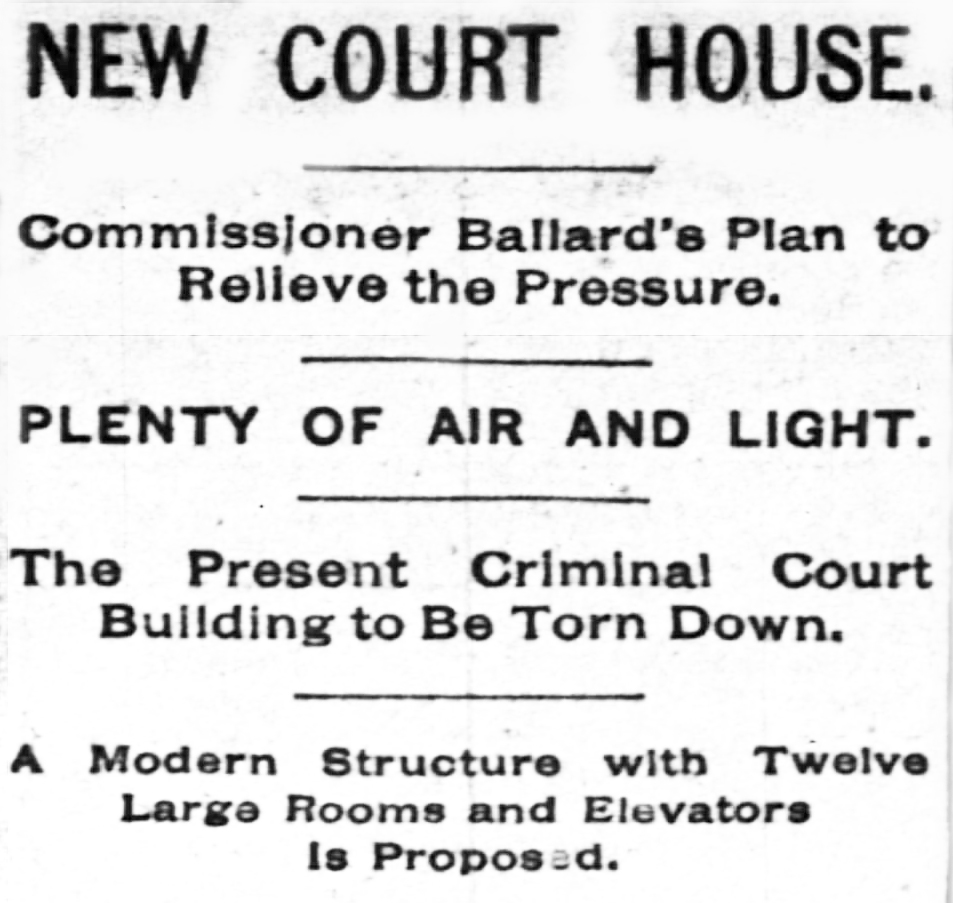 OPINIONS OF THE JUDGES.
County Commissioner Ballard’s plans for a new court house on the site of the present Criminal Court building will come up next Monday in the County Board, and the agitation for a new jail and criminal court will begin to get warm.

The board has no idea of accepting any of the proposals from the real estate firms who submitted terms for various pieces of ground on the South and West Sides. All of these blocks of land were from three to six miles distant from the center of the city, and in out-of-the-way corners.

The most sensible proposition came from Commissioner Ballard, and while it does not receive the unanimous endorsement of the judges, it has many good features that are worth investigating.

HE PROPOSES TO TEAR DOWN
the present criminal court building at Michigan street and Dearborn avenue and erect there a seven-story modern structure, 75×202, which will occupy the entire building space to the sidewalk line, and afford room for twelve large court-rooms, two on each floor, 50×50 feet, or not less than 45×47, together with all the necessary waiting-rooms, jury, judge and clerks’ rooms adjoining. These court-rooms will be in the corners, giving a chance for light on two sides, with six large windows. The halls will be wide and roomy also, and the center of the building will have four elevators.

Commissioner Ballard will, in his plans, pay some attention to the jail. He proposes to utilize a good-sized portion of the present yard, and bring the jail walls out flush with the outside walls of the two wings that are now used by the boys’ and women’s departments. This will afford space for two double tiers of cells, instead of one as at present, and the sanitary conditions can be greatly improved. If found necessary, the jail proper can be built clear to the Dearborn avenue side, and occupy part of the old Dearborn Hospital.

THE TWELVE COURT-ROOMS
in the proposed new building can be occupied by the Criminal, Probate, Insane, and Superior Court together. It will relieve the present crowded condition of the County Building, and afford room for the Sheriff, Recorder, Treasurer, and Circuit Courts, all of which are in need of more room now, and each year will make these departments still more crowded. 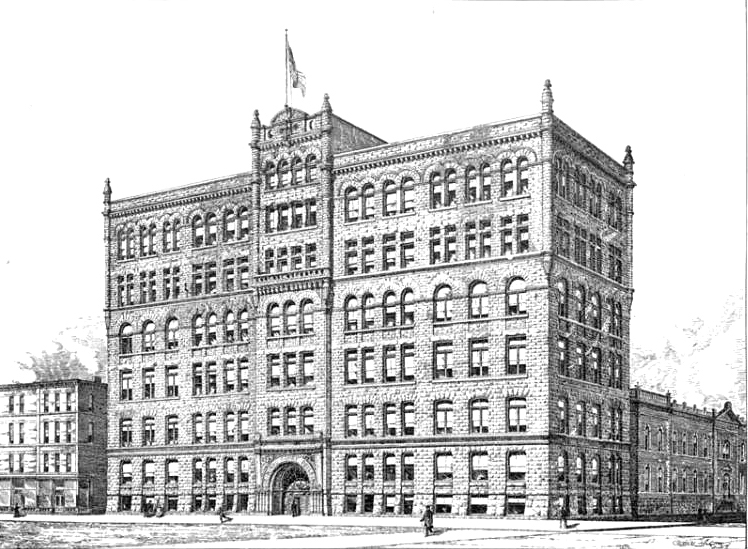 As the bells of the city were proclaiming the hour of noon yesterday the corner-stone of the new Criminal Court Building at Dearborn avenue and Michigan street was laid by the Board of County Commissioners. It was intended originally to have the Masonic order lay the stone, but owing to a misunderstanding the County Commissioners decided to perform the ceremony themselves and chose Addison Ballard to take charge and deliver the address.

The only attempts at decoration were several small American flags which floated bravely from the hoisting apparatus.

The stone which is cut in an L shape to fit the corner of the outside wall is blue Bedford, like the rest of the building, and weighs eight tons. The Michigan street side is left blank, while on the Dearborn avenue side is the inscription:

Description of the Building.
The new Criminal Court Building will cover an area having 204 feet front on Michigan street by 75 feet on Dearborn avenue. It will rest on a foundation of Streesville cement and will be seven stories high. The facade of the first two stories will be Bedford stone and the remaining five stories will be buff in color and of the same material, all rock-faced. The main entrance will be through a twenty-foot massive archway, extending through two stories and handsomely and elaborately carved in stone. The interior of the building will be constructed of steel beams and tile archways and partitions supported and encased by columns finished in scagliola, treated to represent marble. The corridors will all be finished in mosaic and wainscoted with selected marble. The building will have three general passenger elevators and one private elevator for prisoners. The basement of the new building will be eighteen feet high and will contain a battery of five boilers, engine, and dynamo rooms. There will also be toilet-rooms for general use. The first floor will contain rooms for the State’s Attorney, Clerk of the Criminal Court, and Sheriff’s offices, all provided with large vaults. The five upper stories will be divided into ten court-rooms, each forty-eight feet square, with light and air from the two sides; thirteen jury-rooms, ten waiting-rooms, ten Judges’ rooms, ten clerks’ rooms, and ten large vaults, besides twelve large offices for general purposes and conveniences. At the top of the structure will be a large grand-jury room, with ante-rooms for witnesses. 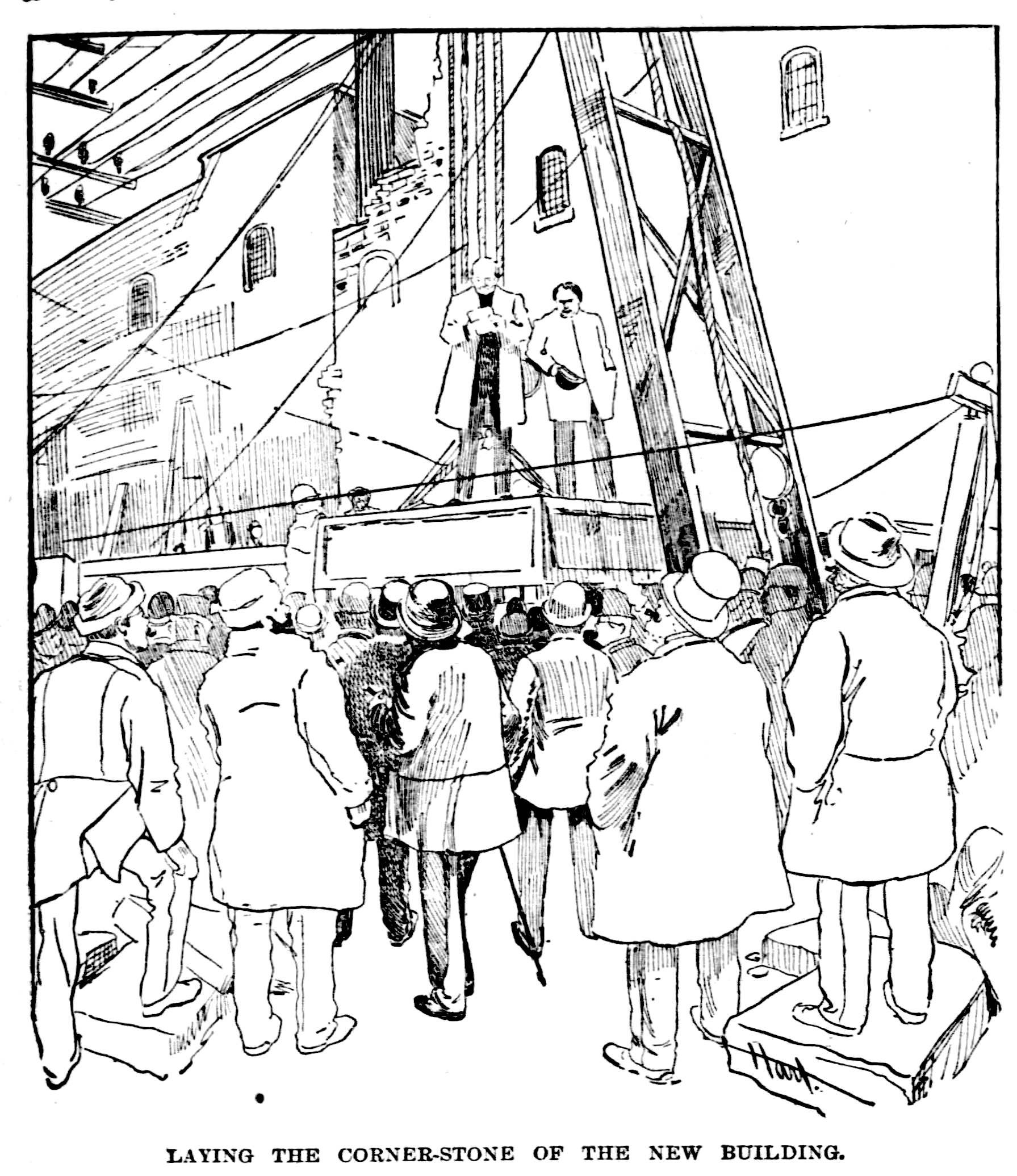 The first Criminal Court Building, erected upon the site the new building is to occupy, was destroyed by the great fire of 1871. As soon as practicable after the fire the Supervisors began arranging for temporary quarters for the county courts, County Jail, and county offices. It was deemed practical to repair the jail, and also to provide quarters in the ruins of the Criminal Court. In December of the same year the Committee on City Relations from the Board of County Commissioners held several consultations on the subject of the site for the jail and Criminal Court withe the Mayor and Corporation Counsel and City Council. After an exchange of opinions it was decided that the structure be placed on the site occupied by the old North Market Hall, which the city would donate on the condition that the building should be completed within a reasonable time and never be used for any purpose other than the one contemplated, the property to revert to the city if it was not so used. The committee secured propositions from owners of adjacent ground fronting on Dearborn avenue east and bounded on the north and south by Illinois and Michigan streets. These owners proposed to sell the same to the county at the rate of $300 per foot for the Dearborn avenue front and corners and $250 per foot on the inside lots, the whole being 218×100 feet, which, together with the lot appropriated by the city, would give to the county a plat of ground including the 10-foot alley of 218×210 feet. They were of opinion that upon this land could be constructed a building which would meet demands made upon it for all time to come. After several months spent in deciding upon plans an advertisement was inserted in the daily papers of Chicago Sept. 17, 1872, for the construction of the foundation of the building. From that time on the building progressed rapidly, and Oct. 21, 1874, the architects submitted a statement of the cost of the building. May 8 Jailer Fols took the prisoners, numbering 103, from the old jail among the ruins of the Court-house to the new jail on Michigan street.

The Board of County Commissioners under which the new Criminal Court Building has been successfully started had its first meeting in December, 1891. It being shown that the structure in existence was absolutely inadequate to the needs of the county, the Commissioners set about drawing plans for the new building. June 20, 1892, bids for the construction of the building were opened and the next day the contract was awarded to Charles A. Moses. Soon the old building began its march toward the dust from which this finer and more modern building is to finally rise to completion.

The old Criminal Courts building at 54 West Hubbard street (Austin avenue) will have an additional $75,000 spent on it to rehabilitate the structure to house the Chicago board of health offices. This was announced yesterday by H. K. Seltzer, Chicago director for the Works Progress administration.

Of the original $153,803 allocation, about $72,000 has been expended. The project includes laying of new mastic type floor covering, decoration of the entire interior, modernization and supplementation of the heating plant, tuckpointing the stone and brick exterior, and the addition of new fire escapes.

About 180 workers are assigned to the project, which began operations a year ago. The six story structure was vacated in 1929 when the Criminal Court building at 26th street and California avenue was completed. 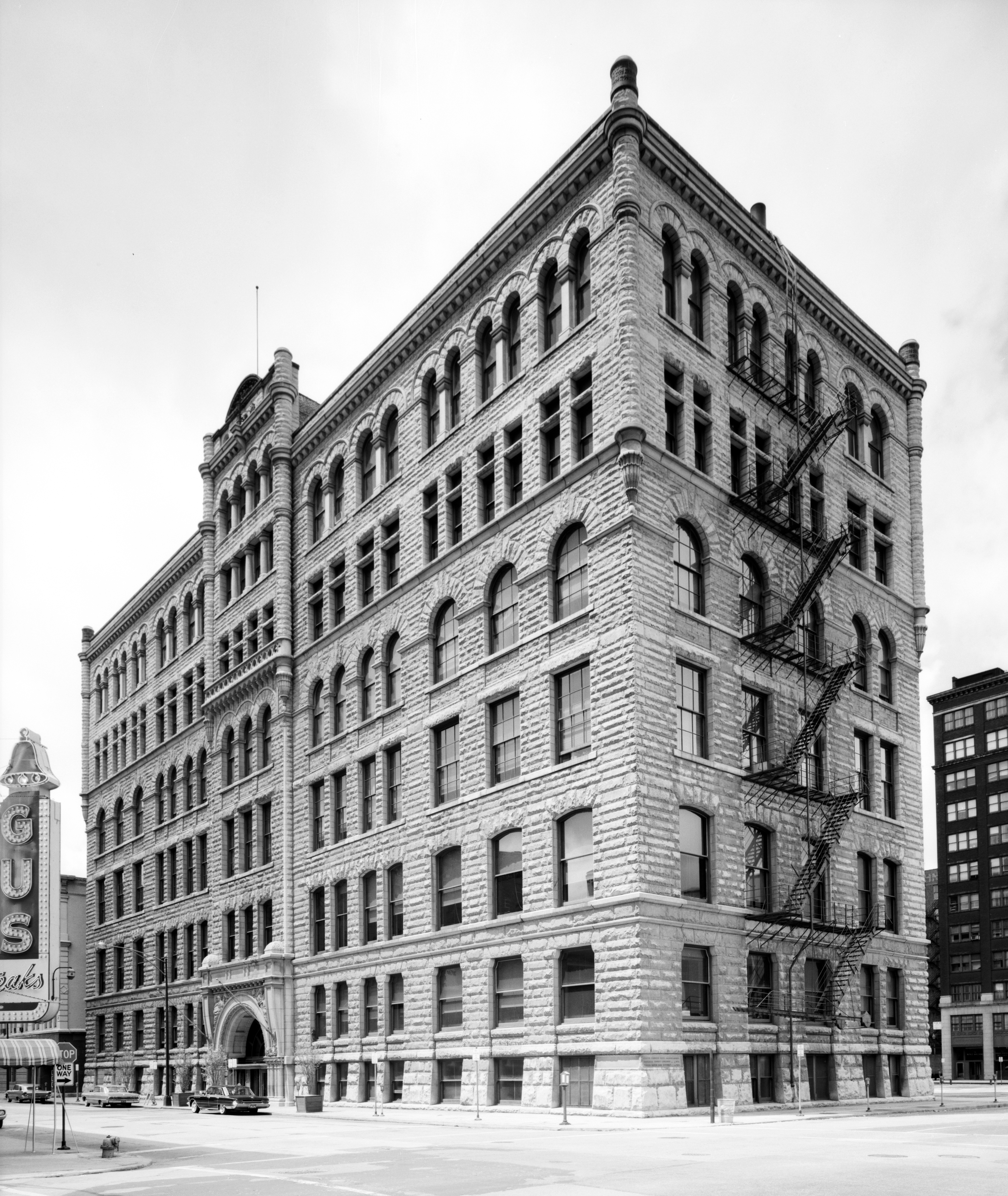 This courthouse was the site of the 1921 trial of the Chicago White Sox players charged with fixing the 1919 World Series and of the 1924 trial of Nathan Leopold and Richard Loeb for the murder of Bobby Franks. This buildiing was subsequently used by the Board of Health. In the 1980s it was sold to a private developer who converted it into a private office building. The jail had been torn down in 1936, and a fire house now occupies its site.