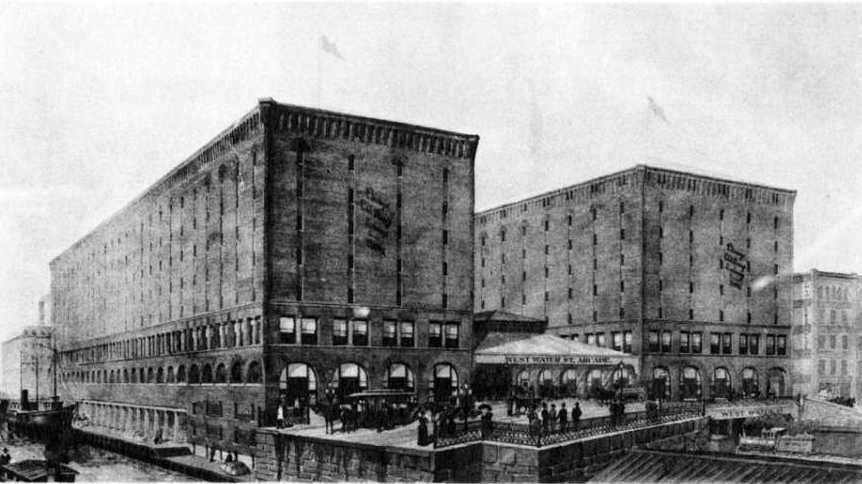 Chicago Gold Storage Exchange.—Situated on the block between Lake and Randolph sts., on the west bank of the Chicago river. Take West Lake or Randolph st. cars. Only a short walk from business center of South Side.

The corner stone of the mammoth building was laid with appropriate ceremonies on November 13, 1890, by Gen. William Sooy Smith. After the laying of the stone the guests, among whom were the mayor and many of the leading citizens of Chicago, were escorted through the warehouse of the company, then in operation, and the action of ammonia gas in producing the necessary low temperature was explained by General Manager J. Ensign Puller. The remarkable feature of the concern is the almost entire absence of elaborate machinery. The system in use produces a maximum effect with a minimal cost, and is technically known as the Absorption System. The liquid aahydrous ammonia is conducted through pipes to the cold storage rooms and freezing vaults, the supply being automatically regulated, keeping the temperatures uaiformily at any desired degree. By a natural process the ammonia gas is absorbed in water, when it is carried back to the distilling plant, there to be converted into anhydrous ammonia again, and continue its round of labor. Thus little loss of ammonia is occasioned, and though costly experiments have alone been able to bring about this economic process, the
total cost of refrigeration by this method has been reduced to the lowest point.

By this process of refrigeration, eggs, batter, cheese, and dried fruits stored away in April, May and June, are perfectly preserved when taken out for the fall and winter trade. All green fruits, particularly apples, are put away in October and November, filling the space previously occupied by the summer goods, and are carried until the egg trade begins in spring. The natural products of California, Florida, Spain, Italy and Sicily, which reach Chicago as the greatest fruit center of the United States, are carefully stored away and oreserved. By bringing sound fruit on the market when desired, it commands the highest prices and insures a more equitable market.

The new building when completed will be the largest in Chicago, exceeding even the Auditorium in size, and is to be the largest building of its kind in the world. The architects, Adler & Sullivan, and the engineers, the Osbourne Steam Engineering Co., have been busily engaged revising and augmenting the plans connected with the cold storage building, carrying out successfully the ideas of the promoters. The Cold Storage Exchange will consist of two buildings extending from West Lake st. to West Randolph st. They will be united by an arcade over the railroad tracks.

The eastern building skirts the edge of the river and extends from it to the railroad tracks.

The western building runs from the arcade to the alley between West Water and Canal sts. The length of each will be 382 feet, the width of the eastern building seventy feet and the western eighty-five feet. The dimensions of the West Water St. arcade are 75 by 382 feet, and the Cold Storage Place arcade is 36 by 382 feet. Each building will be composed of a basement and ten stories, insulated, piped and fully equipped, prepared to carry any temperatures required bv the different nature of the goods stored, affording six large stores, each seventy -six feet deep, fronting on Lake st. , and six stores frontiug on Randolph st. of the same depth, twenty-eight stores on West Water St. arcade, and ninety brokers’ and commission offices on the first floor above the stores. The lowest story on the river front will be thrown open, supported by steel columns, thus giving ample dockage facilities for the unloading of vessels. The facilities for handling car-load lots of perishable freight will be unequaled.

The total cost of the entire buildings, including the purchase of the business of the Chicago Refrigerating Warehouse Company, will be $3,000,000. The estimated cost on steam plant, elevating and electric service, refrigerating and ice plant, is $475,000. The foundation will require 9,000 piles and 1,250,000 feet of oak limber. In the whole construction, which will be finished by spring, 1892, there will be 200,000 cubic feet of concrete and stone masonry, 6,000 tons of iron and steel, and 900,000 feet of tiling for the arched floors. 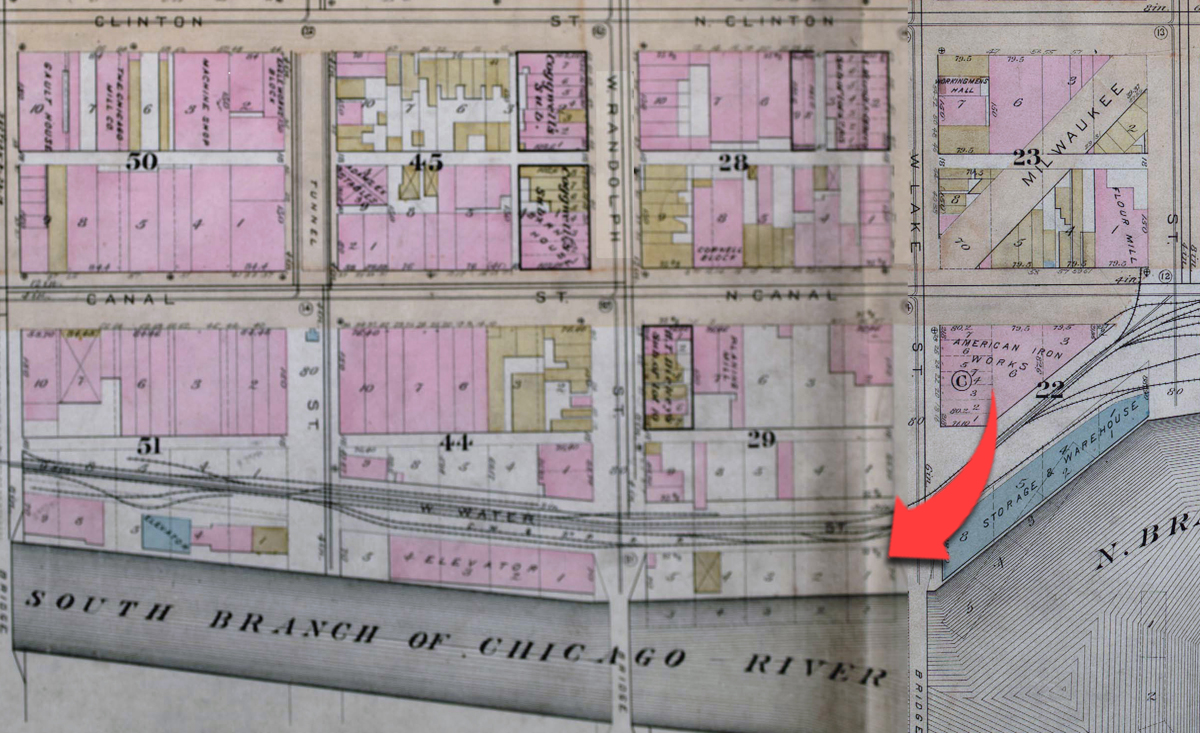