Transportation building at the World’s Fair was in a chaotic state last Saturday. It was two days before the opening of the Exposition and the exhibits were not half placed. On the lower floor most of the work had been accomplished and the exhibitors were ready for President Cleveland to touch the little gold and ivory telegraph key which was to set the machinery in motion in every part of the beautiful White City.

It was in the gallery where the cycle manufacturers hold forth that confusion reigned. Not more than half of the exhibitors had made any pretence whatever at installing their wares. Workmen were engaged in tacking up bunting, unpacking wheels or putting the finishing touches to the booths.

English Exhibit About Ready.
The Englishmen were nearly through with their work and will soon have everything in ship-shape. They are situated in the western gallery and will make an imposing show.

The firit thing to strike the sight-seer is the cosy little ofiBce of the Whitworth Cycle Co., where Mr. F. J. Osmond will be located. A little way down the line is the magnificent mahogany booth of this company. Mr. Osmond had not put any of his wheels up on Saturday.

The Premier Cycle Co. had a considerable area of the wall in their space covered with mirrors. Their booth was made of walnut and presented a neat and substantial appearance. They had three stands, around which were a number of tireless machines.

Warman & Hazlewood’s place was nearer completion. Last Saturday this firm’s exhibit was in place and the wheels were being artistically grouped by the workmen. These were the only English firms that had any sort of an exhibit ready.

The American Exhibit.
The Bearings representatives had hard work to reach the American
gallery, huge boxes and building material barring their way. Hundreds of workers filled the aisles; the tap of hammer and buzz of voices drowned all attempts at conversation. Everyone was busy and the exhibits were rapidly being placed. Dodging flying missiles and workmen, they made their way around the gallery.

The first booth visited was that of the Mcintosh-Huntington Co., who are located at the head of the stairs. Although their space is small they have already made a showing—something that some other firms cannot say. Dummy figures of a lady and gentleman are riding on the bannisters, while several Sunols and Crypto geared ordinaries complete the exhibit as it now stands.
Next is the Hartford Cycle Co., with two machines, a picture of the factory and a curious arrangement composed of seven wheels in the form of a cross, all revolve by friction applied to the lower one.

Of course the Hickory Wheel Co. had the old wooden ordinary, that looked as though it had been hewn into form with an axe. The Hickory Company’s exhibit was the most complete on the American side. Besides the piece of antiquity, they had three of their wheels, finished in red, white and blue enamel; also one finished in natural wood. 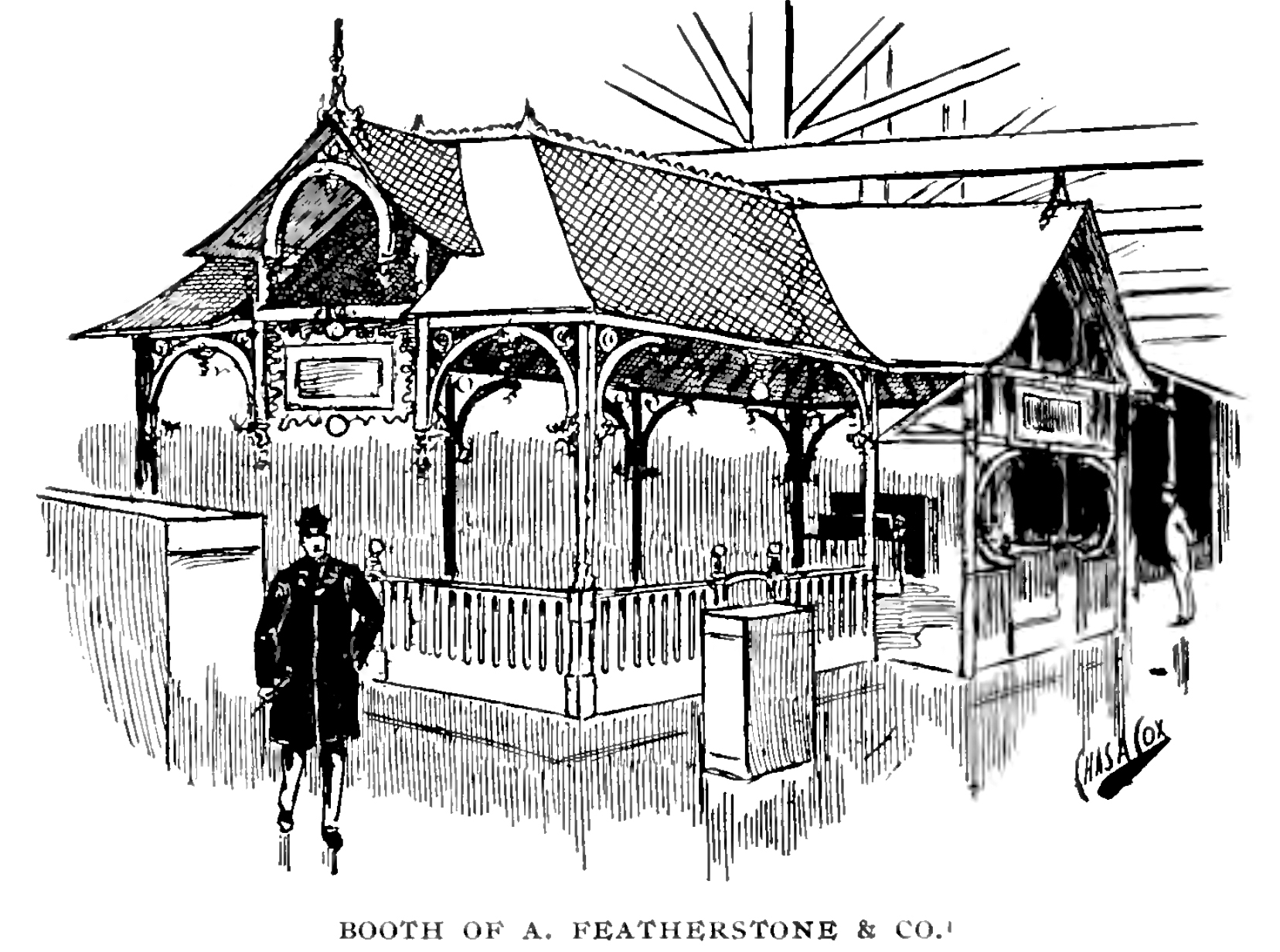 Interesting Relics.
An interesting feature of the Pope Mfg. Co.’s exhibit will be a number of relics. Two boneshakers of uncertain age were seen. One of them was the kind that Noah rode when he coasted down Mount Ararat, and was propelled by the rider “toeing” the ground.

W. A. Rowe’s ordinary, on which he won laurels for himself and fame for the Pope Company; Steven’s battered wheel and an old Challenge com- plete Col. Pope’s museum. The magnificent brass pavilion is almost finished and presents a handsome appearance. None of the modern Columbias had yet been uncrated.

Right back of this is located the booth where A. Featherstone & Co.’s wares will be displayed. It looks like a summer cottage with the walls down, and is highly ornamented with handsome woodcarving. Nothing has been put in it as yet. It will certainly be one of the most attractive in the gallery.

Rouse, Hazard & Co. and the Rouse-Duryea Cycle Co., thanks to the artistic taste of Mr. E. P. Miller, of Peoria, have a fine place. A blaze of yellow catches the eye and one stops to look more carefully. Mr. Miller is an artist in his line. With the aid of yellow silk he has made the booth an arbor of beauty. The back and ceiling are formed of what is technically known as a sun-burst, which is fastened by various parts of a bicycle. Portieres made of tubing and handles droop gracefully from the sides, while a Moorish chair composed of handlebars and other sundries tempts the weary to rest. The crates have not been opened.

An Ornamental Pavilion.
The Ames & Frost Co. are expending a large sum on their exhibit. Nickeled railings, handsome carving and a ceiling of staff make their wooden pavilion very catching. It had not been completed, the staff workers being busy putting on the finishing touches.

The richly red walls of the Overman Wheel Co.’s dignified “Mahogany Hall “loomed up prominently. Manager Klipstein was rushing around getting his exhibit in readiness.

The American Cycle Co. had a cushion tired Sociable and several pneumatic tired Worths in their space. The Sterling and Union allotment was still bare, but will doubtless be well worthy of a visit when the exhibits are up.

The Marion Cycle Co., the Royal Cycle Works and the Remington Arms Co. had wheels ready to be uncrated. Several New Mails were standing in front of William Read & Son’s place.

Donnelly & Deward, of Chicago, comparative strangers to the cycling world, had one of their Double Diamonds in an 8×8 space. It is a light looking wheel with a combined crank and axle and a peculiar arrangement of the crank hanger.

Novel yet simple is the place occupied by the Western Wheel Works. The center part is a pavilion made of nickeled rods, with an American flag for a roof. Huge mirrors on two sides add beauty to the booth. Across the aisle and in the arches is a background composed of wheels.
The Kenwood Mfg. Co. has a square with a yellow canvas roof sup- ported by nickeled rods.

The Gormully & Jeflery Mfg. Co.’s space is next, decorated with red and yellow cloth. Neither of these firms had yet prepared their wheels for display. 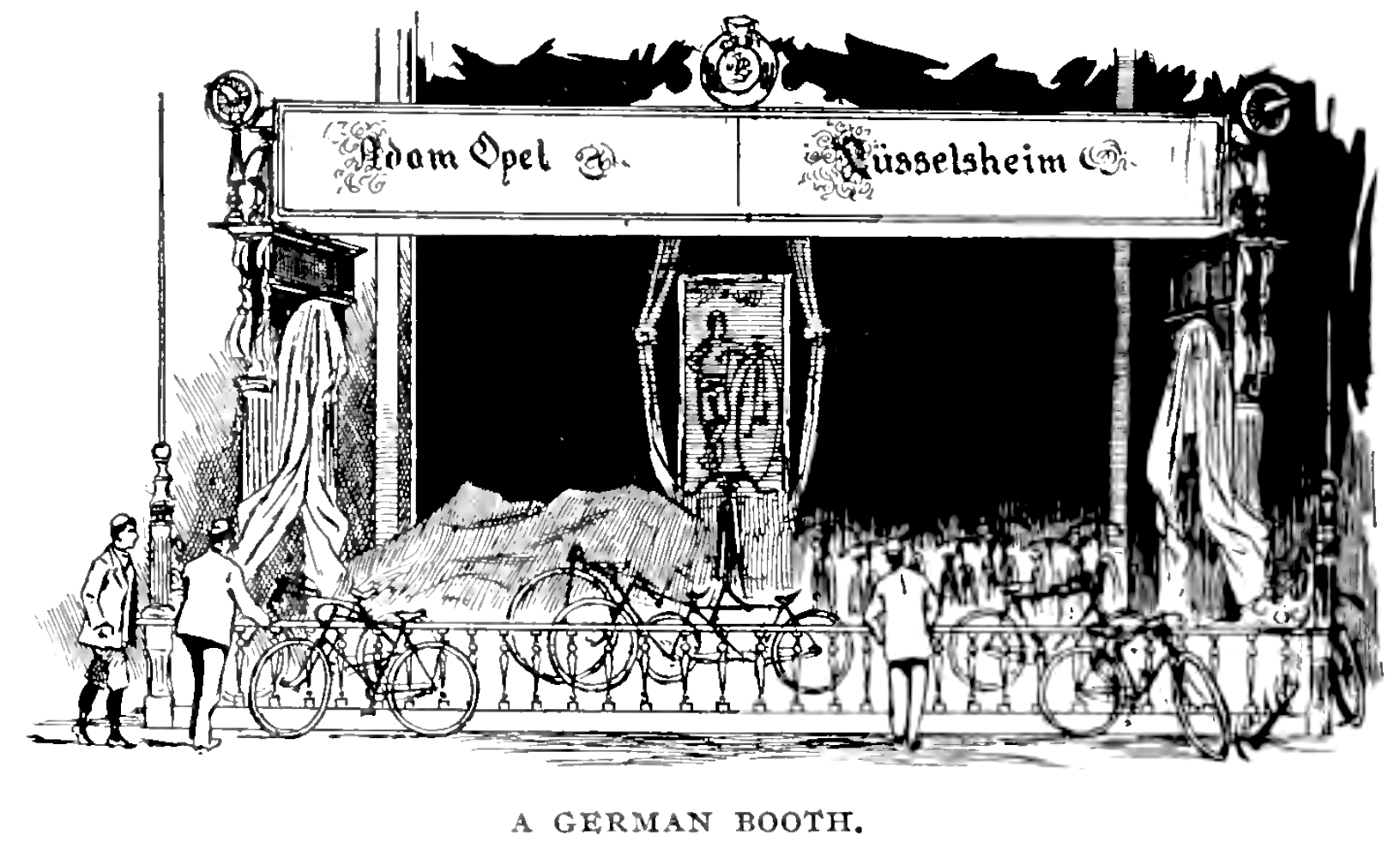 What Germany Will Show.
Down stairs, behind the huge trip hammer, is located the German exhibit. Three firms have taken space and their booths compare favorably with those up stairs. Adam Opel, of Frankfort, has a handsome pavilion, decorated with the German arms and a picture of Lehr, the German champion. Adam Opel, fils, a famous racing man, is in charge. He proudly exhibited the Victoria, the wheel made by his firm. And he had good reason to be proud, for a handsomer lot of machines could not be found in a day’s journey. The gem of the lot is a fifteen pound racer, similar to the one ridden by Lehr, who, by the way, will be in Chicago in August. This wheel is fitted with Dunlop tires and can be lifted with the little finger. The spokes are fitted in a peculiar manner.

Just imagine a 28-pound tandem racer! One of these dainty machines is on exhibition here and surprises one by its lightness and rigidity. The steering rods fasten to the front forks, and are apparently an improvement over the old style. A 30-pound front driver and a pneumatic tired ordinary also grace the stand. Mr. Opel has twenty-seven wheels on exhibition.

Across the way Henrick Kleyer, of Frankfurt, A. M., holds forth. Here is the Adler, a beautiful machine. A twelve pound racer, a 25-pound tricycle and a 28-pound tandem safety are marvels of lightness and workmanship. Three roadsters, fitted with band brakes on the front wheels, look strong and substantial. No one could be found in charge. The third German exhibit was also without a manager. The wheels, five in number, were marked “Badenia, Fahrader, Eisenwerke, Gaggenou, Baden.”

In the United States exhibit of bicycles, more than forty of the leading manufacturers participate. The display is organized almost on the same plan as that of the Great Britain, some of the exhibitors showing special parts of the machine, but the majority presenting the entire mechanism. Many of the collections are housed in handsome pavilions, and not a few are in charge of well-known experts, who have won for themselves an excellent record while using the machines whose merits they are always ready to explain to the visitor.

Chicago is well represented in this section, several of the larger factories making a somewhat elaborate display. The Western Wheel works have, in addition to bicycles of many patterns, wheel chairs and children’s carriages, all very tastefully arranged in their neat and spacious pavilion. In the specimens prepared for exposition, the Stokes Manufacturing company has avoided the use of enamel nickel plates that the visitor may better judge for himself as to their material and workmanship. The Gendron Wheel company, of Toledo, has one of the largest collections on exposition, including bicycles, tricycles, velocipedes, childrenï’s carriages and sulkies. In a structure composed of brass, a Boston company shows in several styles its bicycles with weldless steel tubing. Beside the perfected machine of 1893 are the parts of which they are composed, either as unwrought material or in various stages of manufacture. There is also a model of the English dandy horse, with pedals, of Parisian make, the first safety, which appeared in 1877 in Boston streets, and the now antiquated machine on which Stevens made his tour of the world. Finally there is a bicycle fashioned for military service, one that has recently been adopted by the army department.

Other features in this division are wooden bicycles from a Newton company of Massachusetts. An exhibiting firm, dissatisfied with its space and position, placed two of its machines upon the gallery railing, the treadles worked by automatic figures. A group finished in rainbow tints is among the many ornamental specimens contained in the department. 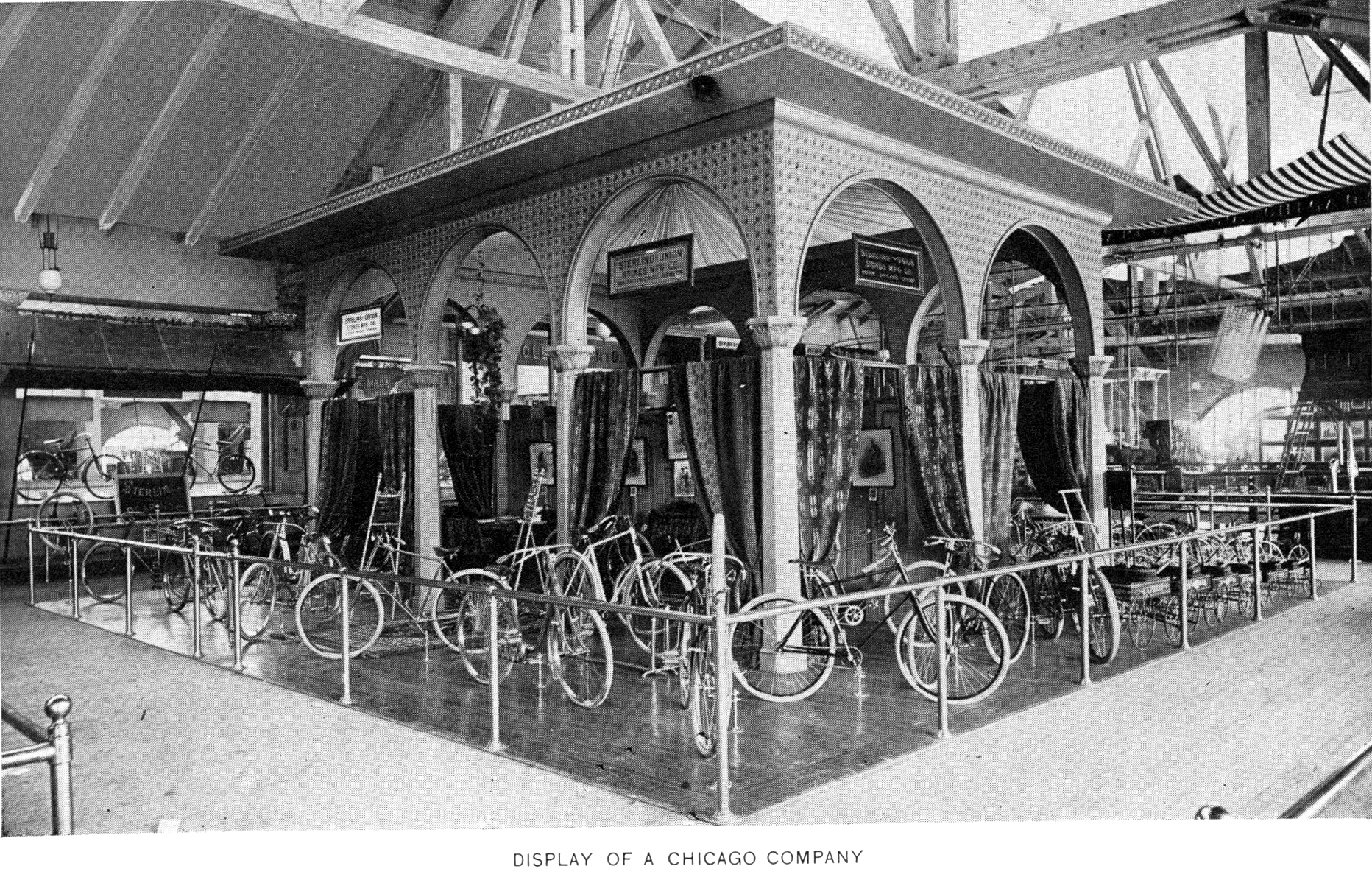 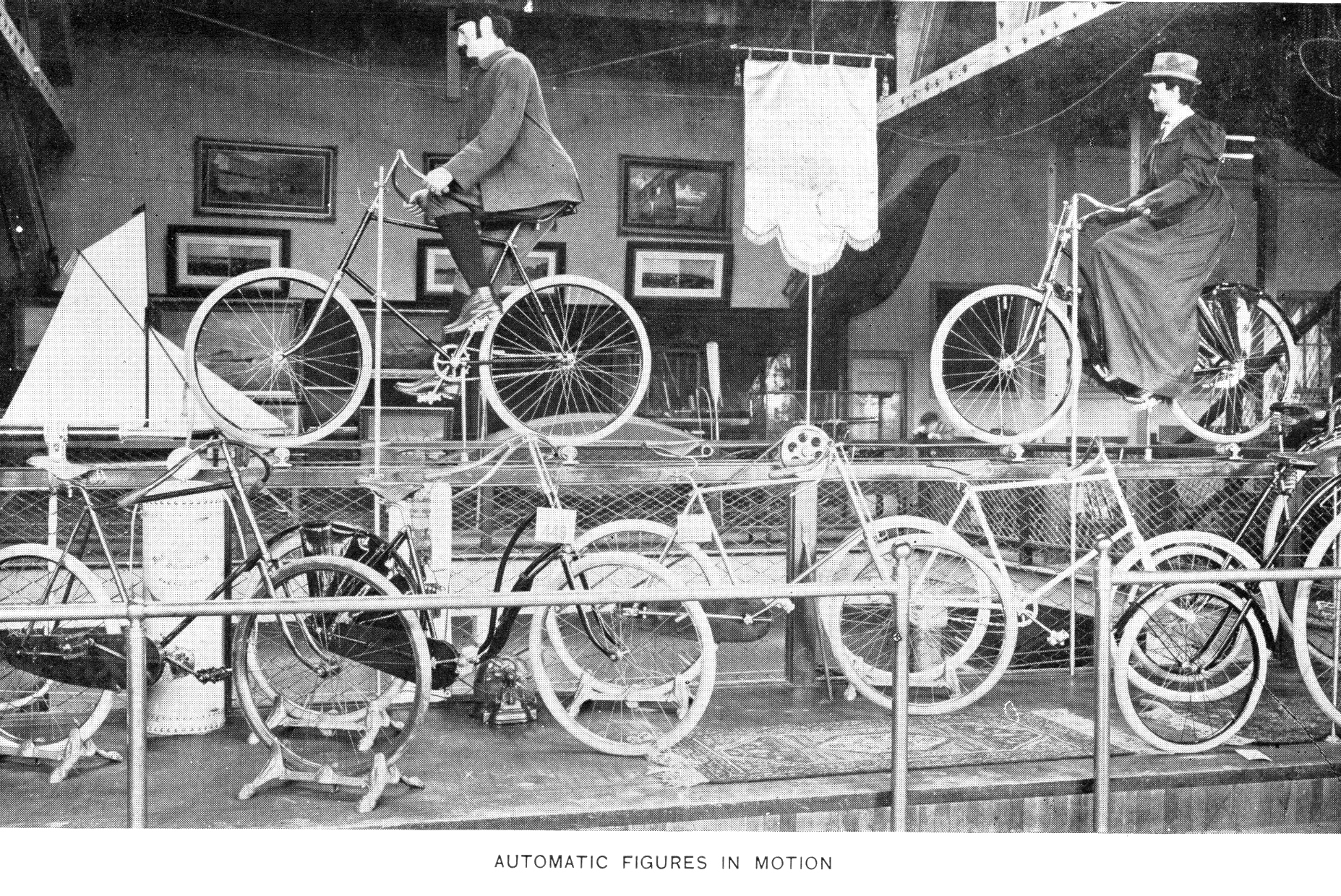 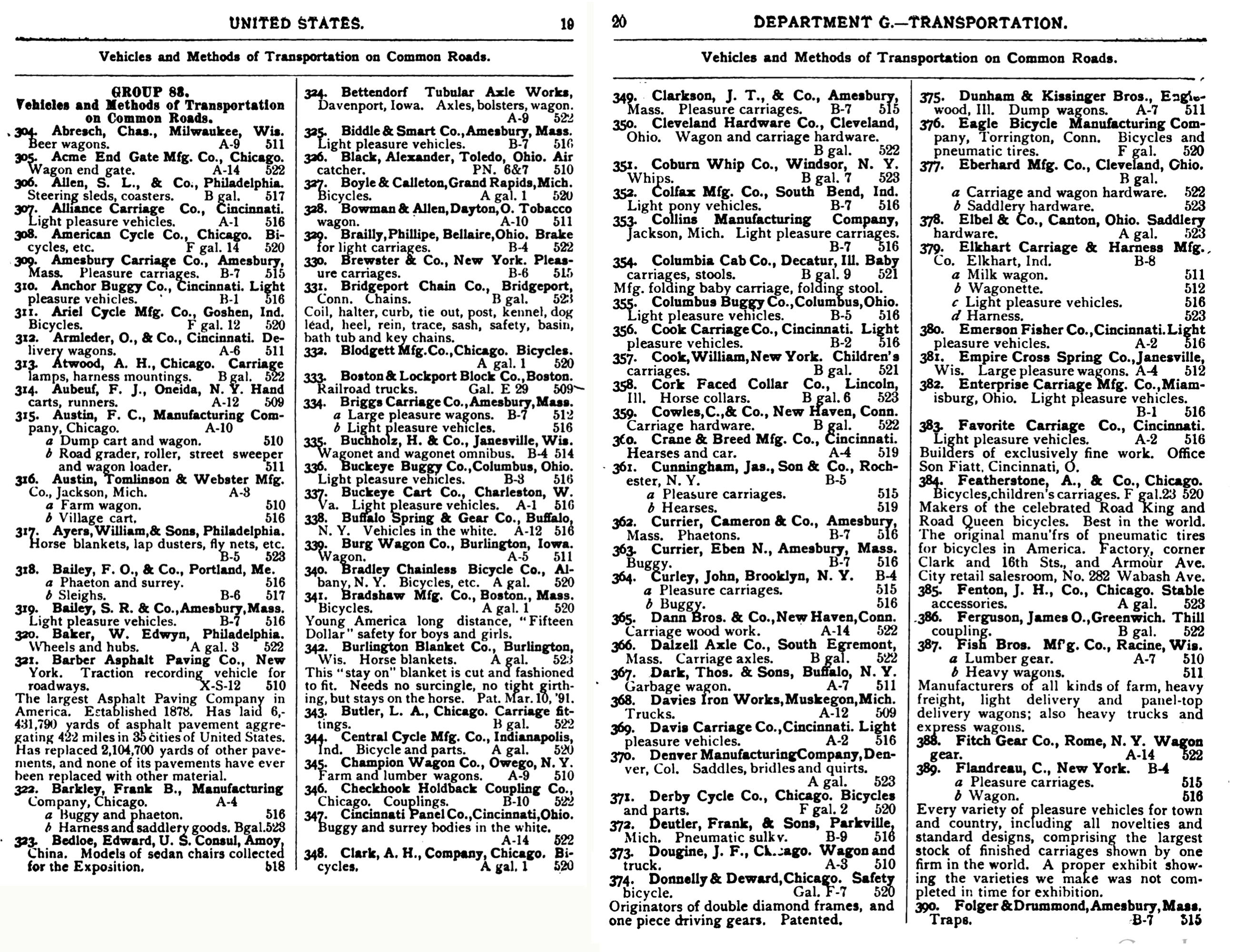 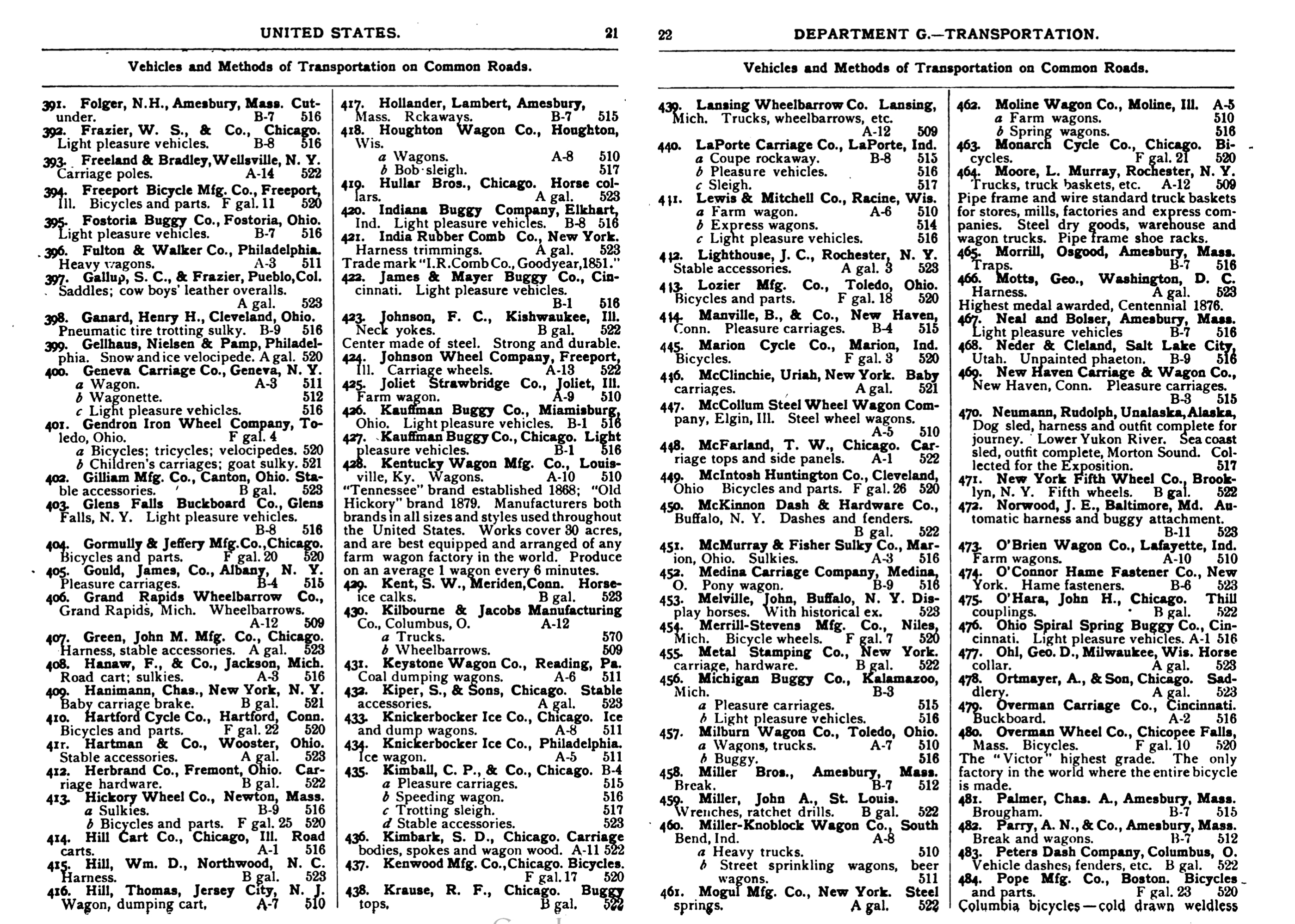 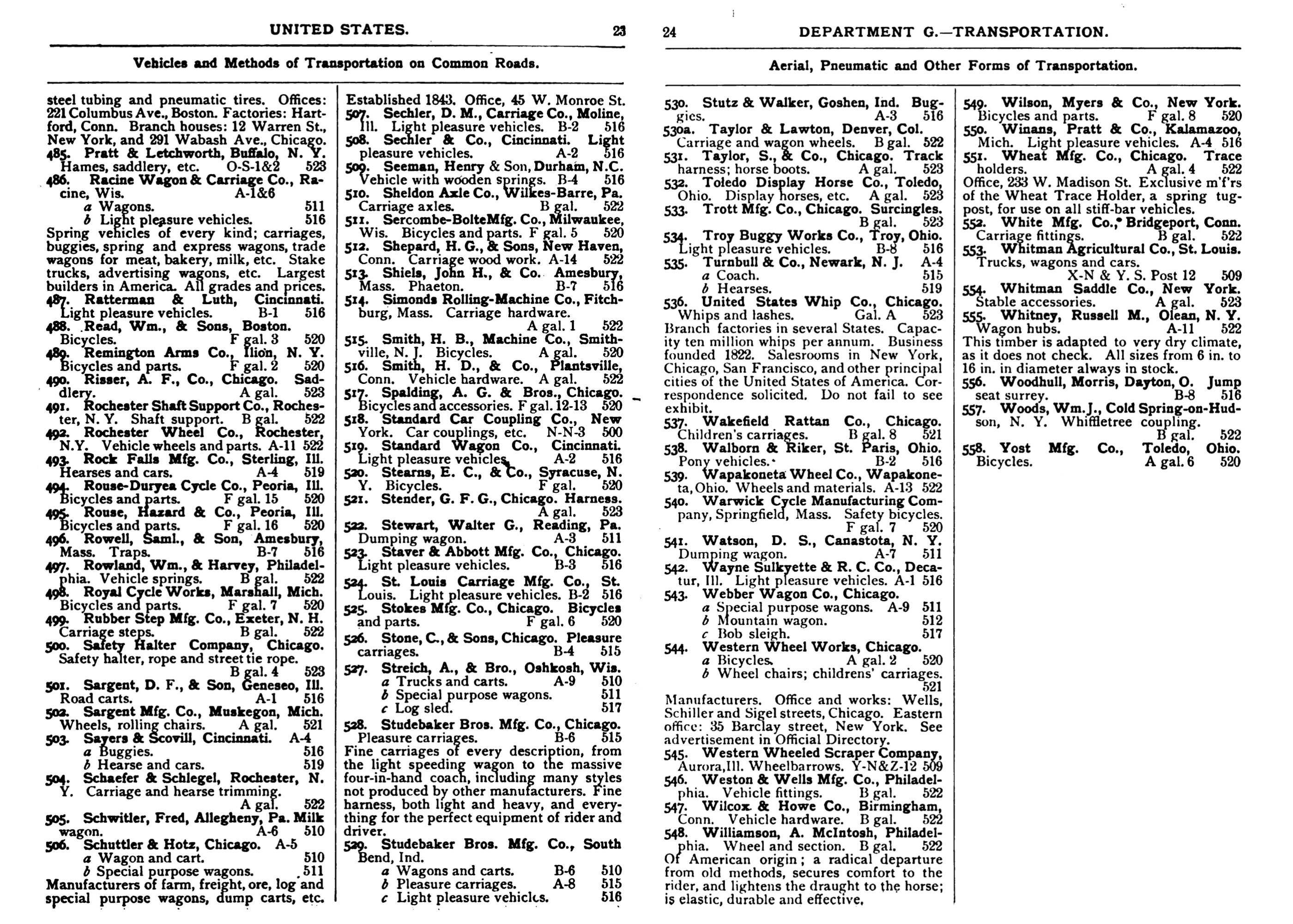