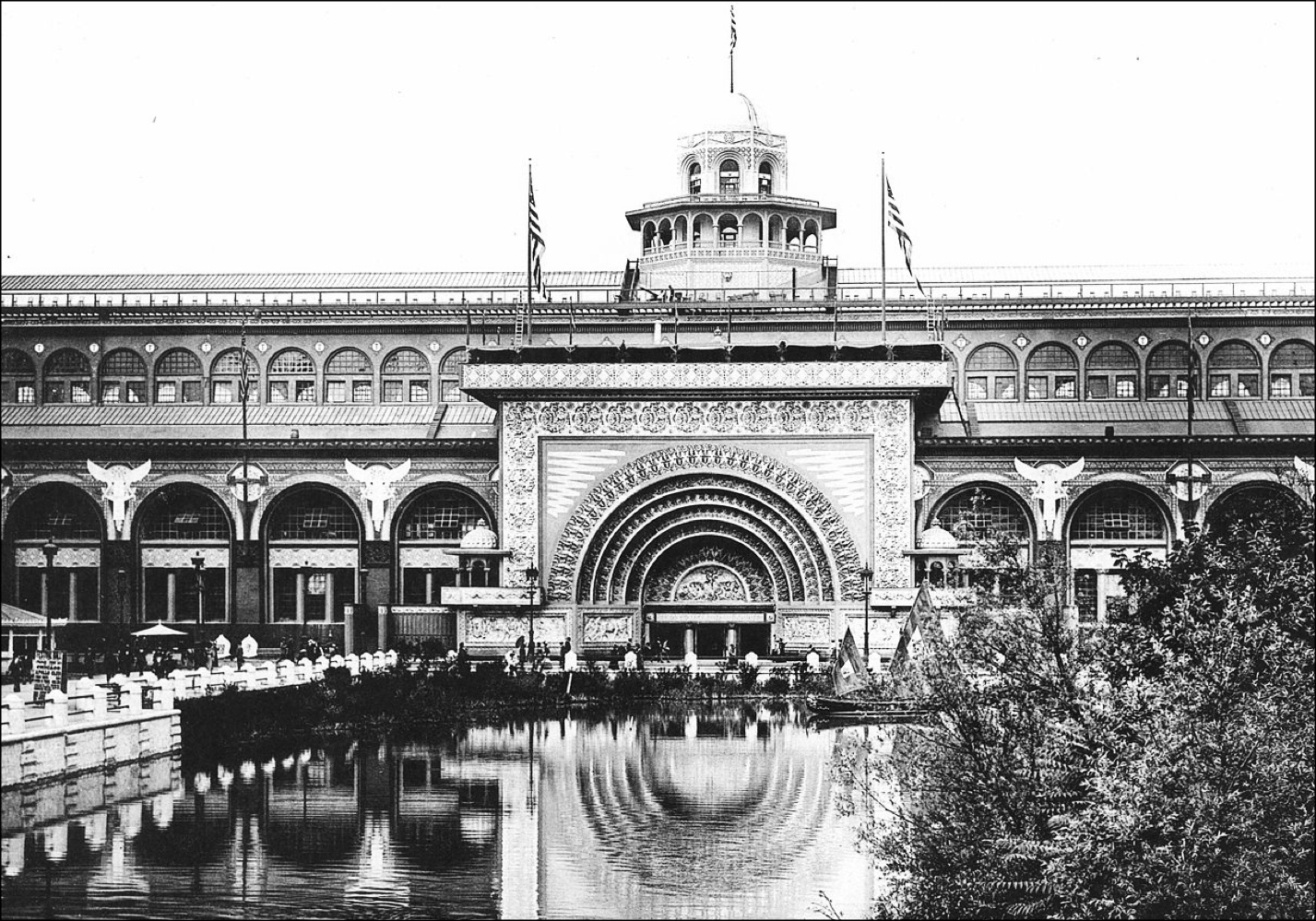 This structure was remarkable in the group of greater buildings through the fact that it was painted with various colors, mainly red while the other enclosures were white. The angels which are seen on the facades were cut in linen, and glued to the exterior, and the decoration generally was in geometrical lines, with something of an Oriental expression and effect. This bizarre appearance was creditably relieved by the commanding beauty of the Golden Door, which is seen at the center, and is further illustrated and described in this volume. The style of the Transportation Building was called Romanesque, and it was erected by Adler & Sullivan, the architects of the Auditorium and the Schiller Theatre in Chicago, where the same peculiarities of beautiful increasing arches and subtending straight lines may be studied. Broad as was the area of the structure, it counted but eighteen acres, annex and all, and was but fourth among the great edifices.

The trains of cars and the locomotives stood on tracks that ran into the annex from the rear, and made a display that was distinctively American, and very flattering to national pride. The arrangement of this department was made with a view to history, and over two thousand feet of track were used in a single exhibit showing the evolution of the locomotive. The Chief of Transportation was Willard A. Smith. Dimensions: two hundred and fifty-six by six hundred and ninety feet; annex, four hundred and twenty-five by nine hundred feet. Cupola: one hundred and sixty-six feet high, and reached by an exhibit of eight elevators. The statuary to be seen at the side of the building was the work of John J. Boyle, of Philadelphia, and represented four modes of transportation – air, water, electricity and land. Cost of all, $370,000. 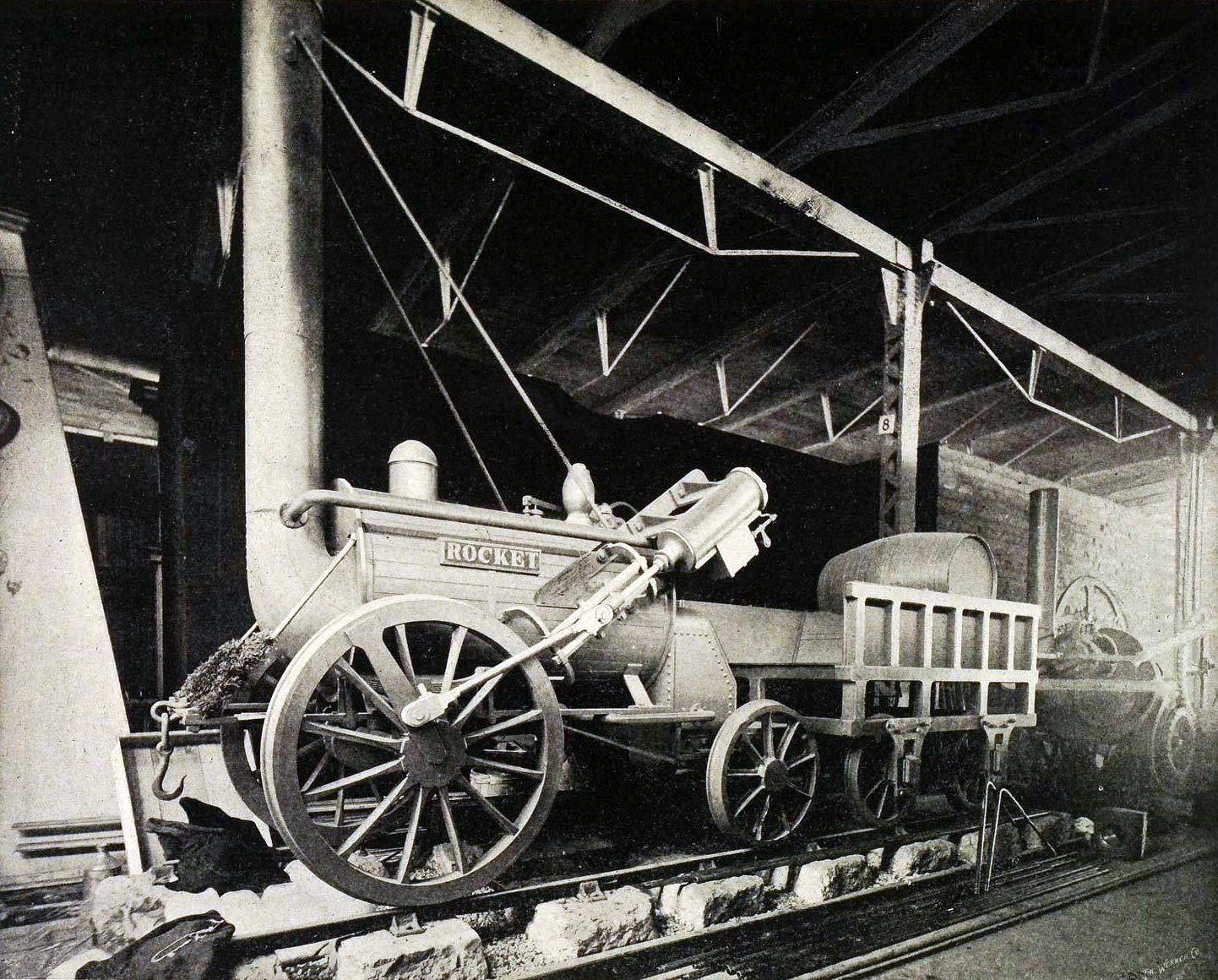 The locomotive “Rocket,” featured in the Transportation Building. The engine included in “Rocket” was designed by Robert Stephenson. 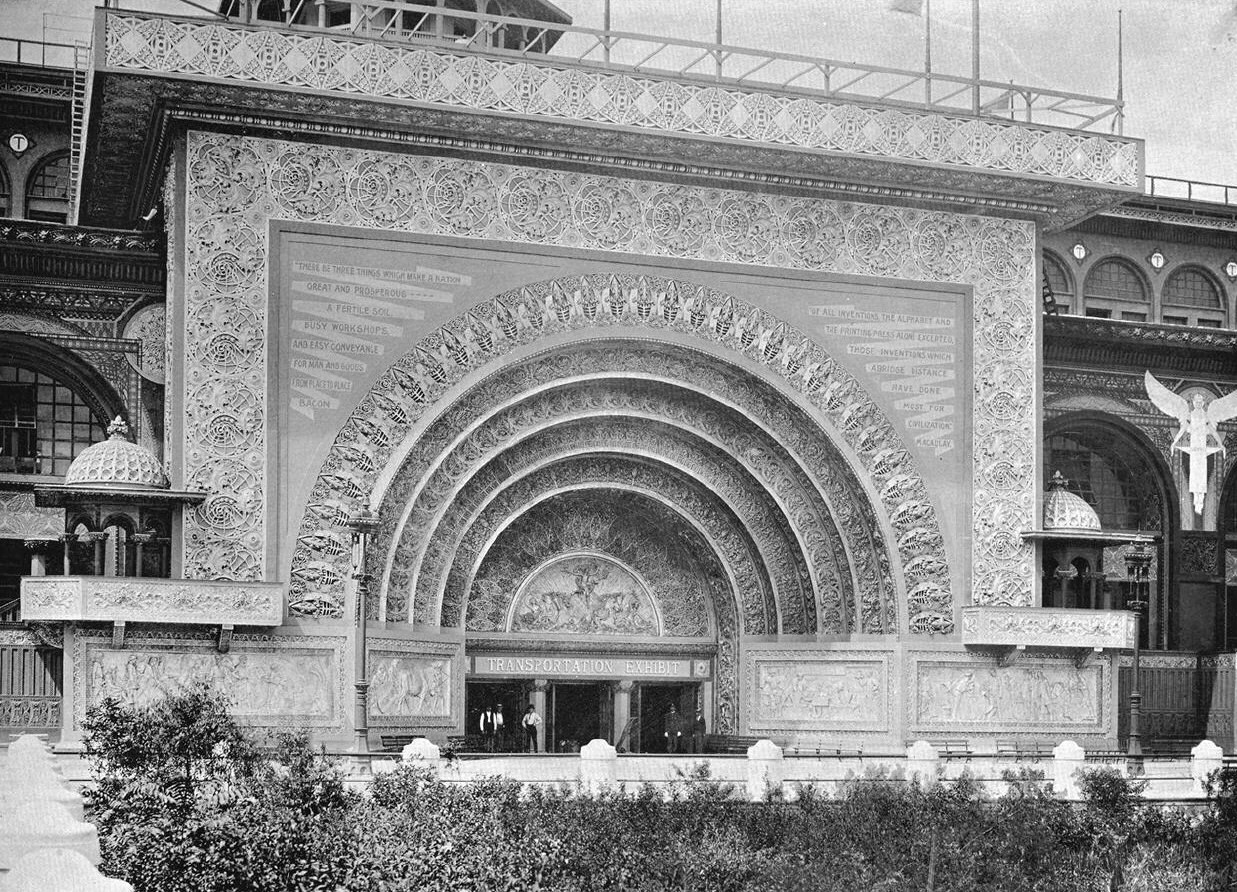 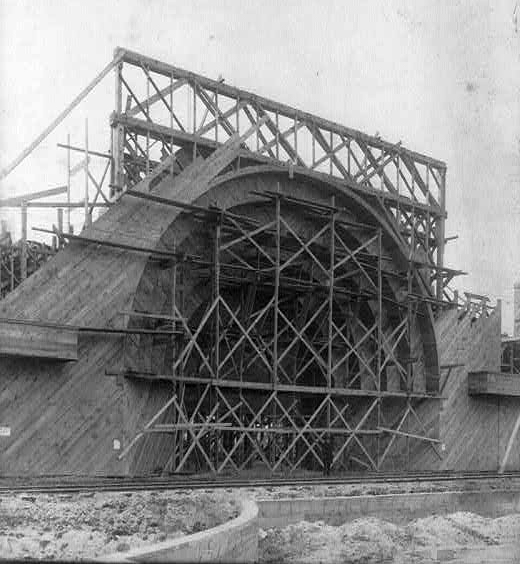 From Picturesque World’s Fair, An Elaborate Collection of Colored Views
PUBLISHED WITH THE ENDORSEMENT AND APPROVAL OF George R. Davis

THE GOLDEN DOOR.—The main portal of the Transportation Building, because of its strikingly attractive features both of design and coloring, became known as “The Golden Door,” and certainly deserved the admiring title given it by the public. The Transportation Building, as a whole, was a complete departure in style and hue from the great mass of structures which gave the White City its name, and its greatest entrance was its most novel and beautiful part. It was, beyond question, the chief illustration at the World’s Fair of what can be done in architecture by combining exquisite reliefs with oriental richness of painting, though in the decoration of entrances architects and artists had lavished all their genius and invention. The doorway is an arch, or, more properly speaking, a quintuple arch, the five blending into a whole elaborately ornamented and embellished with delicate bas-reliefs. The combined arches form a semi-circular environment for a symbolical mural painting in the background and just above the entrance proper. The impression is thus produced of a picture gorgeously framed, and this effect is further enhanced by a square, treated in a similar manner to the arches, and joining the peripheries of the exterior one. This remarkable portal was painted a pea-green and the bas-relief was overlaid with silver leaf, the result being something dazzling in the extreme. Not merely because of its richness and originality, but because of the lesson it taught by comparison with less florid though grander styles the Golden Doorway was certainly among the most notable architectural features shown. 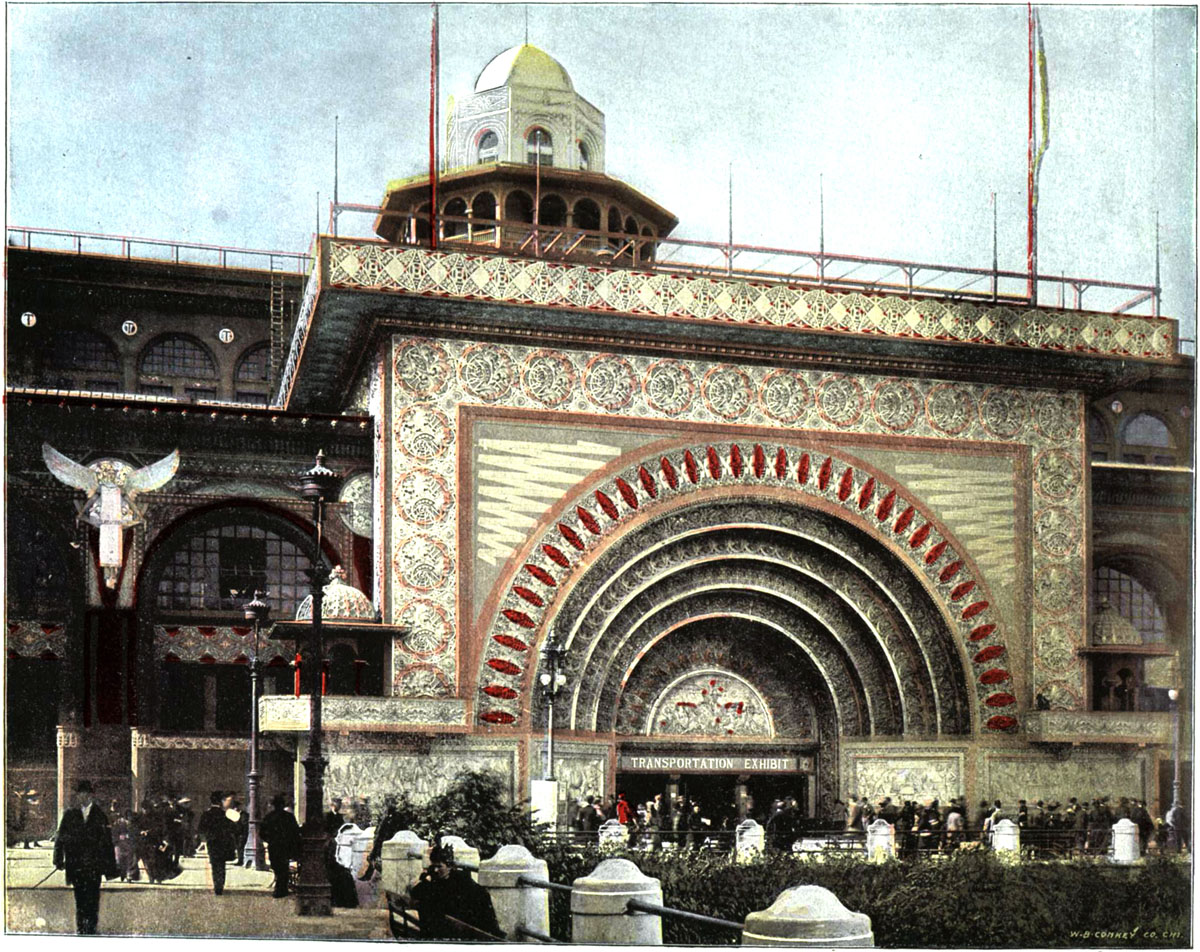 The Transportation Building.
The architects of the Transportation Building were Messrs. Adler & Sullivan, of Chicago,and their strikingly original building added greatly to the interest of the structures of the Exposition. It was situated facing east and close to the la goon which surrounded the Wooded Island. Along its western side was an annex running almost the entire length of the building. Its length was nine hundred and sixty feet by two hundred and sixty feet in width. The general design was simple, but the details were rich and elegant. A cupola, suggesting an Oriental model, rising to a height of one hundred and sixty-five feet, surmounted the roof. The entrance,consisting of a series of concentric arches,was richly decorated in gold and colors, and for this reason was called the “Golden Door.” This splendid en trance became one of the architectural attractions of the Exposition.

This building with its annex covered a vast space, and was filled to its utmost capacity with exhibits of surpassing interest. One of the inscriptions was a quotation from Bacon, and was placed upon the left spandrel of the great doorway. It read thus:

There be three things that make a nation great and prosperous, a fertile soil, busy workshops, easy conveyance for men and goods from place to place.

On the right spandrel was an inscription taken from Macaulay, as follows:

Of all inventions, the alphabet and printing press alone excepted, those inventions which abridge distance have done most for civilization. 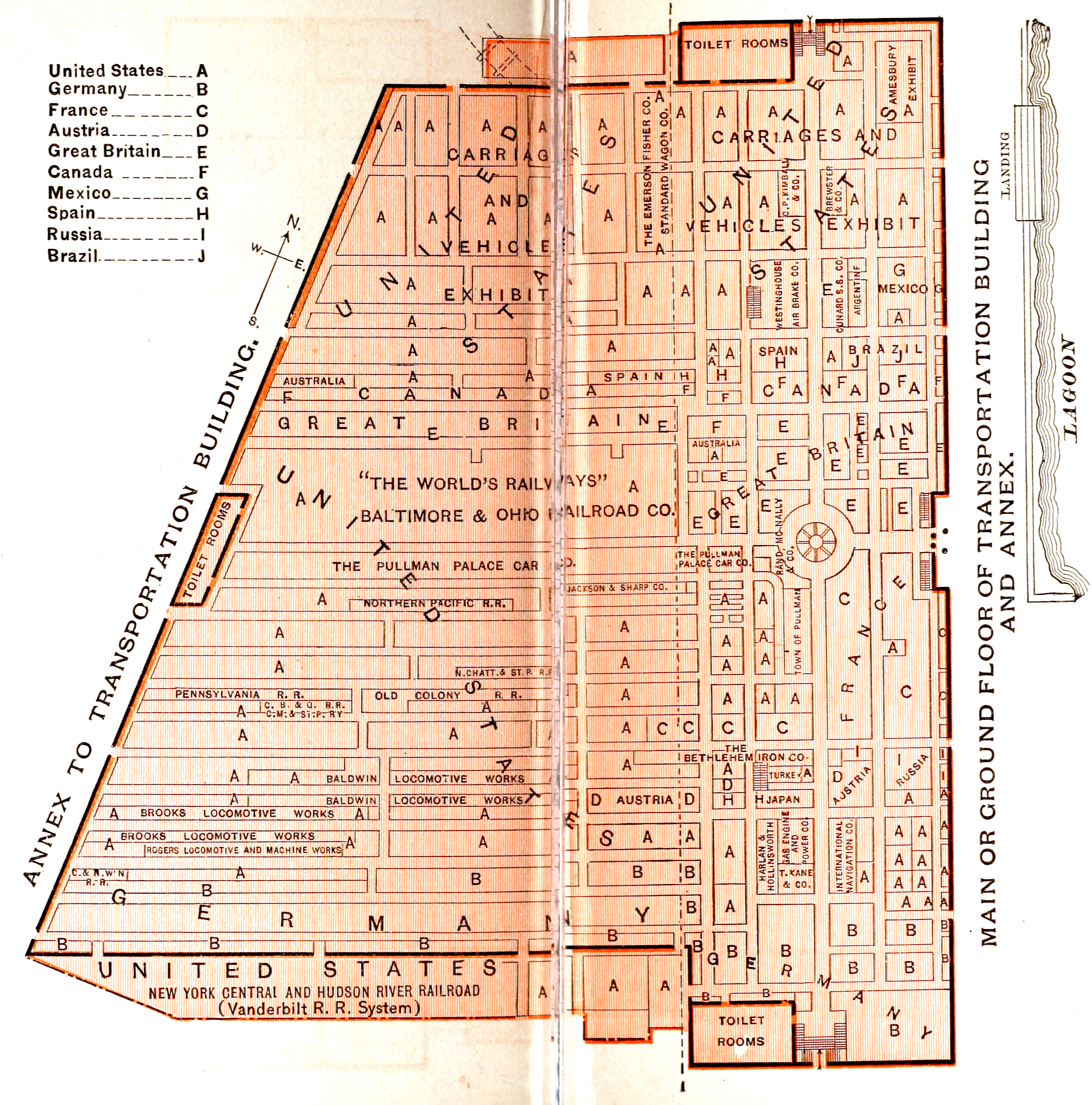