THE OTIS ELEVATORS AT THE COLUMBIAN EXPOSITION
The display of elevators at the World’s Columbian Exposition is very large and includes practically every type of elevator that is used. Probably a dozen different manufacturers make exhibits. The largest and most noticeable display is made by Otis Brothers & Company, of New York, who not only have a large and fine exhibit in the Transportation building, but also have many elevators in actual use throughout the Exposition. Three elevators are conspicuous features in the space occupied by the exhibit of this company, and these are in constant use, carrying passengers to the gallery and return. In the central tower of the Transportation building eight hydraulic passenger elevators have been installed. These were designed primarily to carry people to the roof promenade and restaurant, but after the burning of the cold storage plant the Exposition management closed the roof to the public, and since then only two elevators have been used, and these simply to carry people to the gallery. In the Administration building there are tight Otis electric passenger elevator engines. In the Manufactures and Liberal Arte building there are four electric elevators which carry people to the roof promenade, while in the Casino building there are two hydraulic passenger elevators, one hydraulic freight elevator, and two hydraulic direct-acting dumb elevators.

No elevators at the Exposition have attracted so much attention as those in the Manufactures and Liberal Arts building. These have the highest rise of any electric elevators in the world— a distance of 185 feet. The distance, however, seems much in excess of this because the tower in which they run is in the center of the north end of the main aisle of the building, and is open on all sides, as may be seen by examining the illustration on this page.

These elevators are operated by electricity, and represent the latest achievements in the manufacture and operation of elevators, both from a commercial point of view and from considerations of safety. There are four cars in this shaft but they are run in pairs, so that in reality there are only two plants, which are attached to opposite sides of the drum, and which have no independent counterbalances, as the cars balance each other. Each car has a carrying capacity of fourteen people, and there is an attendant in each car, although the operating is done in one car for each set ; that is, the wheel-operating device in one car controls not only the operation of that car, but also the one which counterbalances it. The cars are run at stated intervals and are started at a signal, at which the doors at the top and bottom are closed. The electric motor which operates each machine is of 15 horse power capacity and derives its current from the 500 volt Exposition power circuit. The speed of the elevators is 200 feet per minute. The machinery is installed in the basement of the building, immediately under the elevator shaft. The armature shaft of the motor is coupled direct to a worm shaft by insulating coupling. This shaft engages two gear wheels, which in turn engage each other. The worm shaft is double, being both right hand and left hand, so that there is no end thrust, this being taken up between the two wheels. The electric controlling device is a solenoid coil, which is in the main armature circuit, and which acts on a core rigidly attached to the rheostat brush, thus automatically controlling the amount of resistance in the armature circuit. The motor is of the Eickemeyer type. The armature makes 800 revolutions per minute and the speed is readily reduced by means of the worm shaft. The motor is compound wound and so arranged that when the operator throws on the current it uses both the shunt and series fields; but when the load is started the series field is automatically cut out, leaving the shunt field to control the speed. The brake device is of the iron strap pattern, faced with leather, applied automatically.

A great many electric elevators constructed on this same general plan, except so far as the counterbalance is concerned, have been installed by the Otis Company. The general plan for counterbalancing is that the weight of the car is almost counterbalanced by a weight attached directly to the car, while one-half the maximum load is counterbalanced by another weight attached to the opposite drum from the main hoisting cable ; the result being that the motor is not called upon to work except to one-half of the rated capacity of the elevator. These elevators are provided with an automatic stop at the bottom, also at the top of travel. The application of electricity to elevator use has been very successful, as is shown by the efficiency of these elevators at the Exposition, and it has been in use long enough and has been tested thoroughly enough to prove its special advantages. It has advantages over steam on account of its economy under general conditions, smoothness of operation, and freedom from dust, noise and heat. Neither does it require the attention of an engineer or other skilled attendant. As compared to hydraulic elevators, the electric elevator does not occupy as much space, is cheaper in first cost, and in ordinary use is probably cheaper of operation, as it, calls for only as much energy as is required to manage the load, while the hydraulic elevator uses so much water regardless of the weight of the load, and works to its fullest efficiency only when every load is a maximum one.

There are conditions, however, to which steam and hydraulic elevators are especially suited, and the latest achievements in the construction of these elevators can be seen in the exhibit of the Otis Company. The elevators In the tower of the Transportation building have two compound Worthington pumps, which pump water into 20,000 gallon pressure tanks. A hydraulic pressure of 90 pounds is used. The cars are supplied with all safety devices and with an automatic stop, so that they stop at the top and at the bottom independently of the operator without shock or jar. This is accomplished by means of a sleeve, which gradually closes the port as the main piston approaches the end of the cylinder, thus controlling the egress of water and bringing the car to rest gradually. Many of the cars exhibited have inclosing doors which are operated automatically by compressed air.

Steam elevators are used largely in factories and else where where steam is to be had readily. The latest improvement in the construction of steam elevators, and which is shown in this exhibit, is the compound. This has great economy in operation, and the lowering of heavy loads is controlled without the use of the brake. These elevators, like all other Otis elevators, are supplied with safety devices, which stop the car and lock it firmly to the guides should any undue speed be attained from any cause whatsoever in descending. The elevator shown in the foreground of the picture of the exhibit is one of these compounds. The two shown in the rear of the space are electric, so that these in the exhibit space and those in the tower illustrate the three types of elevators manufactured by this company.

This company has installed several elevators which are of more than passing interest, as they show what a degree of perfection has been attained in this direction. The elevators in the Eiffel tower at Paris are of this company’s make. At Weehawken, New Jersey, are three hydraulic elevators, each car having a capacity of 135 people or 20,000 pounds, and yet make a speed of 200 feet per minute. This is probably the largest elevator plant ever installed. The company is now installing a large plant in the tunnel under the harbor at Glasgow, Scotland, which has six lifting and six lowering elevators, each of a capacity of 12,000 pounds. This plant will work at a pressure of 800 pounds. Each of these elevators will be equipped with the so-called Thorpe valve. By use of this device a certain quantity of water is called for when the load is under 6,000 pounds, and a double quantity when the load exceeds 6,000 pounds. Another plant that the Otis Company has installed and which embodies many principles of the elevator is the inclined railway in the Catskill Mountains, which is 7,000 feet long, has a rise of 1,600 feet and carries 100 passengers with their baggage the entire distance in eight minutes. 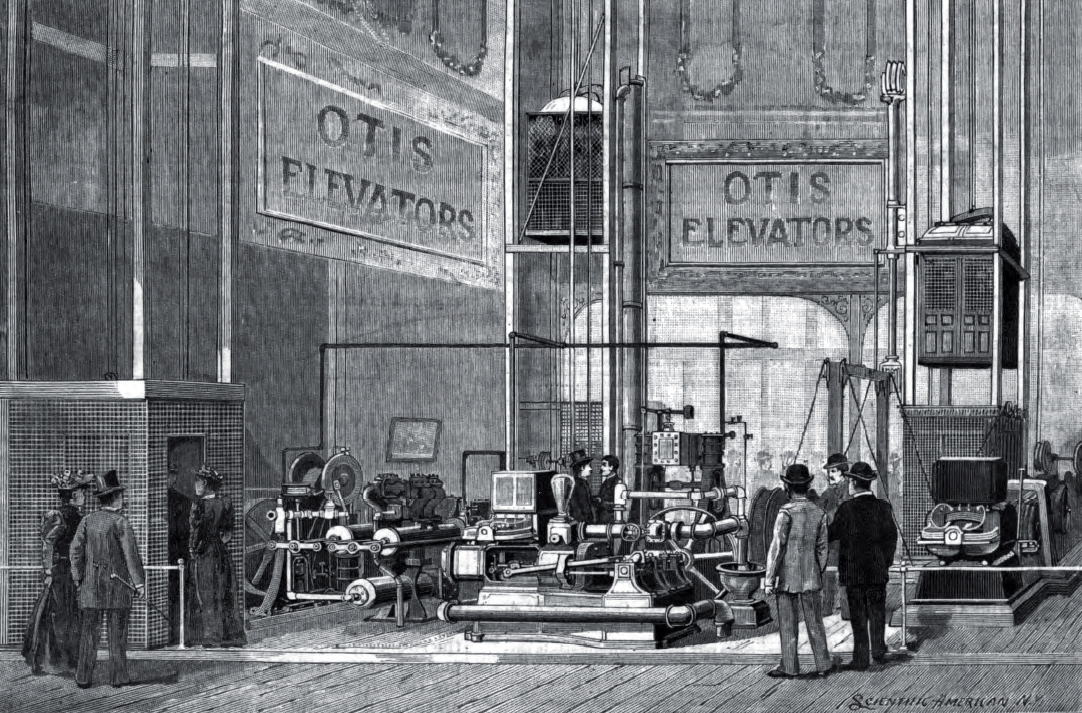