THE GREAT EXHIBIT OF THE SELF-WINDING CLOCK COMPANY AT THE WORLD’S COLUMBIAN EXPOSITION
Clocks are among the few inventions of mediaeval origin which have withstood the test of ages. Since the production of the first time-keeping machine by an inventor unknown to us, it has been improved, made in complex forms, simplified, cheapened, and to-day clocks are to be found in every city and hamlet, and in almost every dwelling on the globe. In its present form it is as nearly perfect as human in genuity can make it ; but, notwithstanding the great perfection of the clock as a machine, there are certain inherent defects which prevent it from being absolutely perfect as a timepiece. Variations of temperature and of atmospheric conditions have their effect, and in spring clocks (which have almost superseded weight clocks for general use) variations in the time of winding are unfavorable to accurate running. Taking these causes of variation in addition to occasional running down and the lack of close regulation, it matters little how perfect the mechanism may be, the common clock is pretty certain to gain or lose a small amount each day, so that in a short time, possibly before it is noticed, it is out perhaps from one to ten minutes—an amount quite inadmissible in these times. 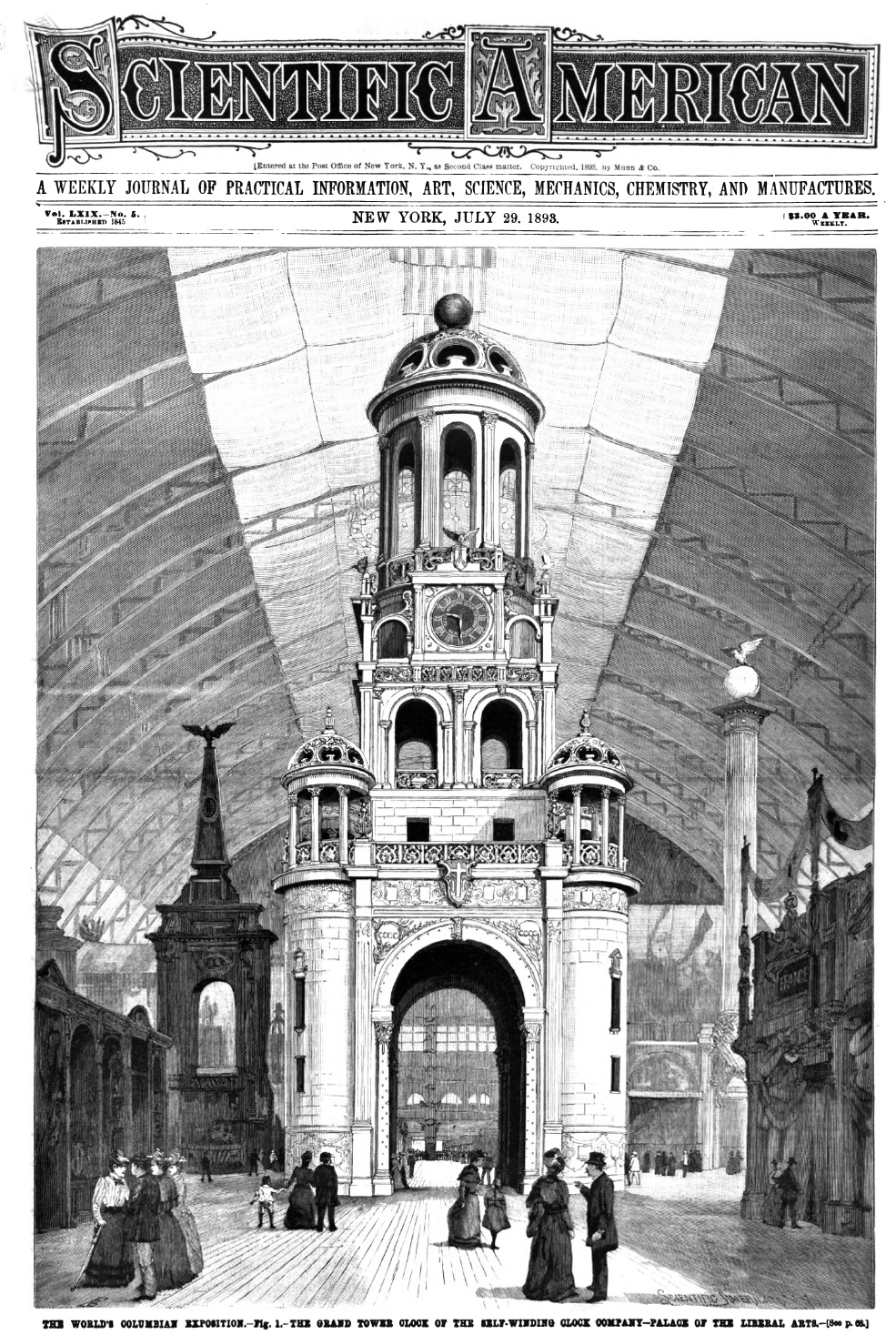 All these difficulties are remedied by the ingenious electro-mechanical devices applied by the Self-Winding Clock Company, of New York, to their clocks. Our attention has been directed to this subject by the remarkable exhibit of this company at the Columbian World’s Fair at Chicago. The exhibit includes a pavilion containing samples of the manufactures of the company; a magnificent clock tower 150 feet high, having four 7-foot dials, 70 feet from the ground, 200 self-winding clocks placed in different localities on the ground, all controlled by the master clock at the pavilion. There is also exhibited in the clock tower a complete chime of nine bells, very beautiful in tone, and weighing over 14,000 pounds. These bells are the manufacture of the Clinton H. Meneely Bell Company, of Troy, N. T., and constitute a joint exhibit by them and the Self-Winding Clock Company. In addition to these, there are two three-dial clocks in the towers in the railway terminal building, and twenty-four clocks showing the time of day in the principal cities of the world, in the waiting room of the station. The pavilion is very artistic in design and decoration, being the work of a Paris architect. Its roof is supported by massive columns, and at each corner, near the cornice, is placed a clock.

The self-winding clock in its simplest form consists of an ordinary train from the center arbor to the escapement—the other arbors and wheels and the mainspring being omitted—a fine spring 6 feet long W of an inch wide and 5/16 of an inch thick attached at its inner end to the arbor, and at its outer end to the spring barrel, and an electric motor arranged to wind the spring once every hour. By a simple attachment the electric current is made to pass into the motor, which quickly and silently carries the spring barrel around once, thus storing sufficient energy in the spring to run the clock for one hour. The motor is supplied with a current by a small battery concealed in the clock case. In winding the spring, its outer end. is carried in the direction the inner end moves in un winding. In consequence of this arrangement, the auxiliary maintaining power usually found in good common clocks is dispensed with. As a result of the frequent winding and reduction of friction, the power required to run a clock according to this system is only 1/40 part of that used in ordinary clocks. The motor will run for a year without attention, and at an expense of less than twenty-five cents.

The master clock at the pavilion is provided with a gravity escapement invented by Mr. James H. Gerry, superintendent of the Self-Winding Clock Company. This clock synchronizes all the clocks throughout the Exposition grounds and buildings by an hourly electrical impulse which instantly corrects every clock to the second. The mechanism by means of which this result is secured is shown in Fig. 3. All clocks intended to be used in the synchronizing circuit are provided with the synchronizing magnet, D, and with mechanism associated with its armature lever and the clock movement. On the minute hand arbor is mounted a disk, Q, provided with two projections, 4, 5, and the second hand arbor is provided with a heart shaped cam. The armature, E, is rigidly attached to the levers, F, Q, so that they move whenever the magnet, D, is energized. The lever, F, is adapted to engage the heart-shaped cam on the second hand arbor and bring it to XII, and the lever, Q, is furnished with a curved end having fingers for engaging the projections, 4, 5, on the minute disk, thus turning the minute hand arbor, bringing the minute hand to XII. A latch, L, pivoted to the clock frame is provided with a pin, I, arranged to drop under the hook, H, carried by the lever, Q, so as to prevent any action of the synchronizing levers except at the hour. A pin in a disk mounted on the cannon socket unlocks the latch, L, about fifty seconds before the hour, and closes it again about fifty seconds after the signal. This arrangement prevents any accidental cross on the synchronizing line from disturbing the hands during the hour. This diagram, besides showing the synchronizing arrangement, gives a good idea of the great simplicity of the self winding clock. 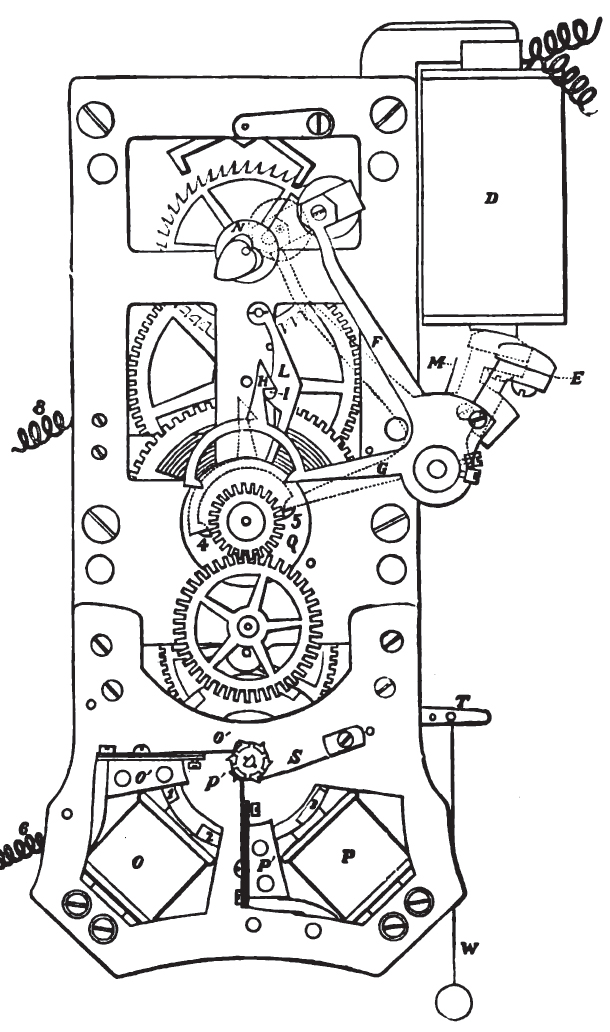 Fig. 3. THE SELF WINDING AND SYNCHRONIZING MECHANISM.

The system which is thus illustrated in this exhibit of the Self-Winding Clock Company is an accurate representation ot the system developed by them in connection with the Western Union Telegraph Company, for a uniform time service, and which, in extent, embraces the whole of the United States. They now have over fifteen thousand of their clocks in circuit, which are synchronized daily by the telegraphic time signals from the time service of the United States Naval Observatory at Washington. These clocks are either sold or rented. It will thus be seen that time is bought and sold, and is in fact made an object of merchandise, though not at the exorbitant rate proposed by the sovereign who offered millions of money for an inch of it. The government furnishes.correct time free to its citizens, but they must get it at the Naval Observatory at Washington. As it is impracticable, if not impossible, for them to do it individually, the Western Union Telegraph Company daily forwards it to every part of the country. Three minutes before noon, all general business is stopped, and direct communication made with the capital. Precisely at twelve o’clock a single electric impulses announces the time all the way to the Pacific Coast The cost of this service is one dollar per month, or twelve dollars per year for each clock. This, places standard time within the reach of everybody.

There are standards of weights and measures, of distance, and we are pleased to note that now there is a standard of time available for every one at a nominal cost, whereas formerly the cost was such as to permit only of the most prosperous jewelers obtaining time signals; the service was very incomplete and very expensive. Now, not only jewelers are served, but the general public, including trust companies, banks, commercial houses of every description, factories, schools, and private houses, and the service has proved most accurate and reliable.

While the time service is the main business of the company, it has also a large business in selling clocks. All clocks made by them are of high grade, and, in addition to their ordinary styles of self-winding clocks, such as are used in dwellings and places of business, they also make a feature of specialties, which are unique and interesting. For instance, the company manufactures a programme clock which makes a signal contact at the beginning of each minute and is connected to a commutable signal instrument so arranged as to close electrically a circuit any minute or any number of minutes in the twenty-four hours. This invention is not only very useful for train dispatchers on railroads, but also for schools, for indicating the hours for commencing and ending recitations, etc., by ringing bells or giving other signals.

The chiming clock is also an interesting feature. This is a clock in which the tubular chimes are operated electrically and in which any tune within the compass of nine bells can be played. The most unique feature in this direction is the large chimes in the tower already mentioned. These chimes are fitted with special hammers and magnets, by means of which the large bells may be struck electrically. This electrical mechanism is so arranged that it can be played automatically at predetermined times by means of clock mechanism, or an operator can sit at a keyboard, which ordinarily would be placed in an organ loft or any convenient place at a distance from the tower, and any one at all familiar with music can play on the immense bells, which by the old method would require all the strength of a man to operate. At the Fair a lady plays these chimes twice a day seated at a small case placed in the booth. This method is likely to revolutionize the present method of ringing chimes.

In Fig. 4 is shown a motor for driving the bands of the tower clock. This consists of a small Edison electric motor geared to the arbor which revolves the hands. The motor is connected with a storage battery or with the street current through a relay, and the relay is operated by a current controlled by the master clock. When the circuit of the relay is closed the current is made to pass through the motor, thus turning the minute hand through one minute space. By an ingenious automatic arrangement the motor is stopped when the limit of the movement is reached. Thus every minute an impulse is sent to the motor in the clock tower, causing the hands to move forward by a step -by-step motion, each movement representing one minute. The striking of the hour and quarters is effected by an electro-mechanical arrangement controlled by a striking movement in the pavilion. The machine used for tower purposes is light and simple, and may be placed upon any floor, while the controlling clock may be placed in any position in the building, or even at a distant point. 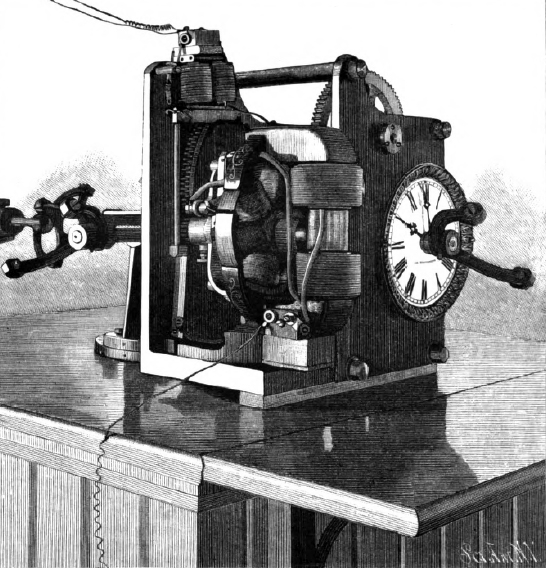 Fig. 4. ELECTRIC MOTOR AND MECHANISM FOR DRIVING THE HANDS OF THE TOWER CLOCK.

Though the Self- Winding Clock Company has but just entered the field for supplying tower clocks, it is rapidly introducing those of their make in the different towns and cities. The fact of being able to produce an accurate tower clock which will operate perfectly without reference to the steadiness of the tower or the location of the controlling clock, is leading to the introduction of the electric tower clock in places where the ordinary weight and pendulum clock would be impracticable. The New York offices of the Self Winding Clock Company are located at 26 Broadway.