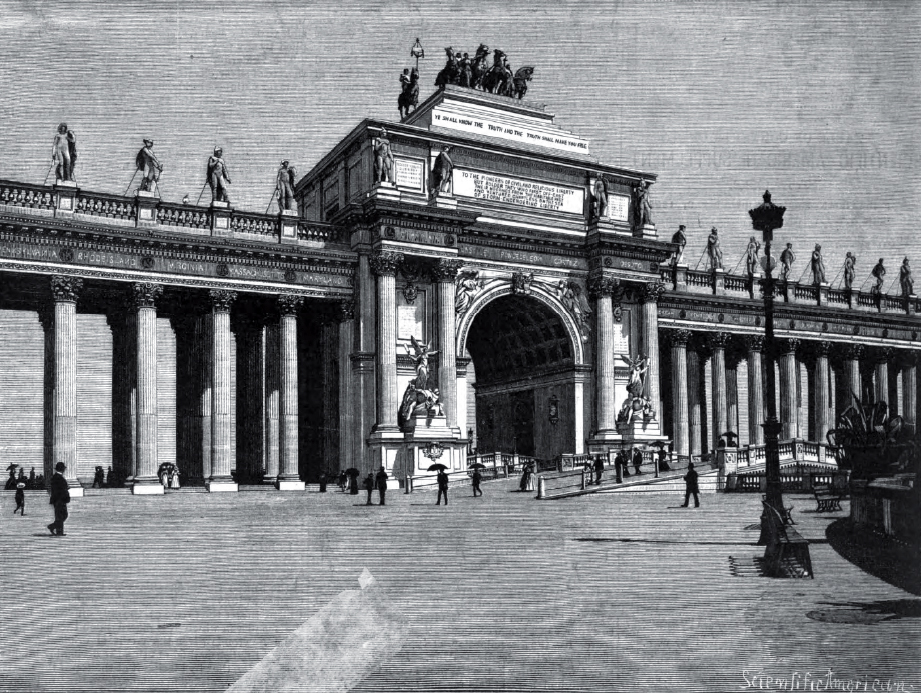 The Court of Honor of the World’s Columbian Exposition is bounded on the north by the huge Manufactures building, on the south by the glorious facade of the Palace of Agriculture, to the west rises the majestic dome of the Administration building and on the east is the Peristyle with a triumphal arch bearing the Columbus Quadriga. In the center of the Court of Honor is the main basin, with the MacMonnies fountain at one end and the outlet to the lake under the Triumphal Arch at the other. The Court of Honor itself is the most beautiful feature of the Exposition, and at night, when the buildings are outlined with electric lights, the effect produced is enchanting beyond description. The perfection of proportion, which is so noticeable in the Exposition and which is so wonderful when the number of different architects is considered, is nowhere better illustrated than in the Peristyle and the Triumphal Arch. 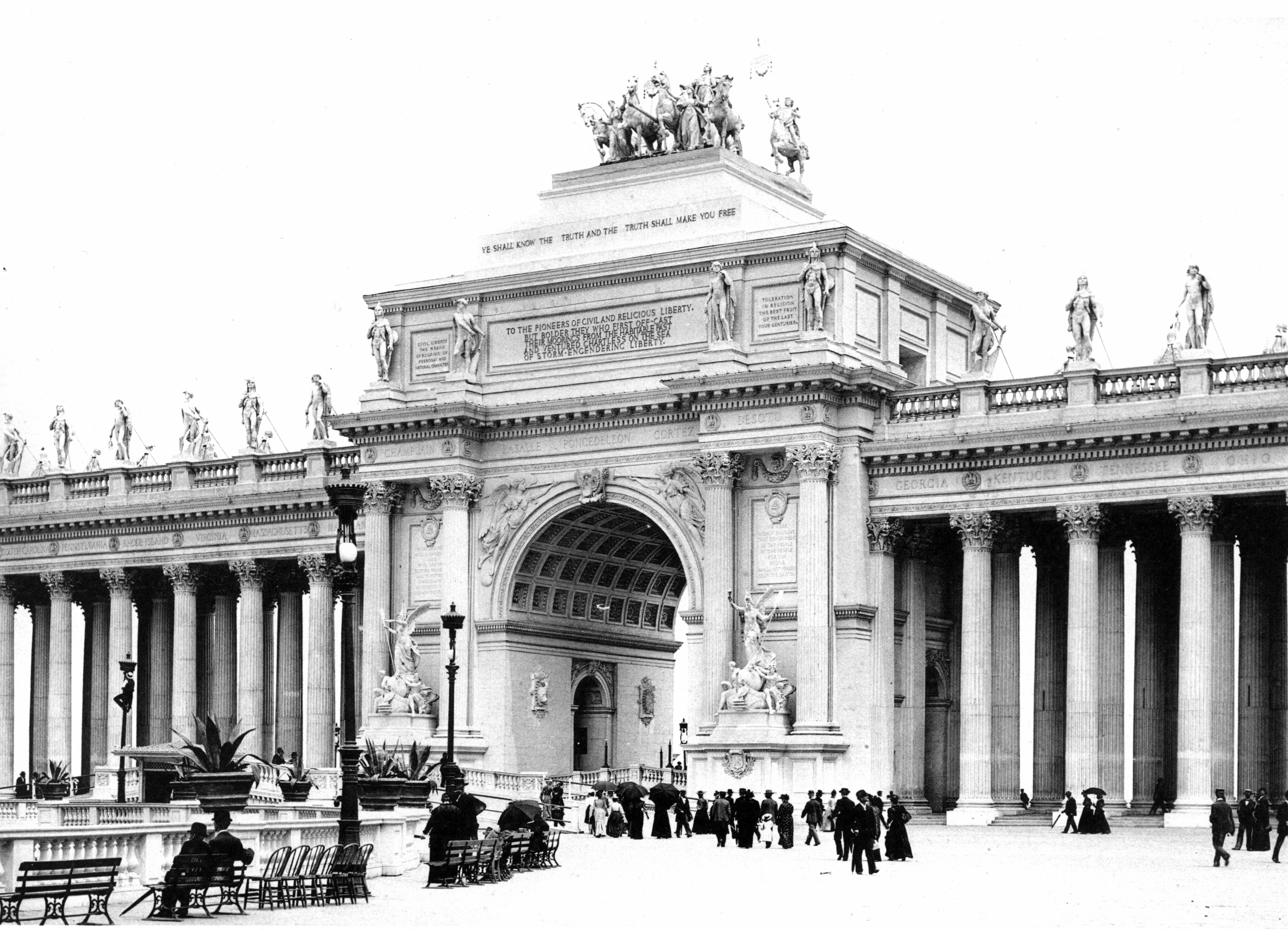 The Peristyle connects the Casino and the Music Hall and forms the eastern end of the Court of Honor. The Peristyle was designed by Mr. C. B. Atwood in the classical style, and is free from what architects calls nervousness, which is apt to take away the dignity that is so essential in a work of monumental grandeur. The Peristyle is composed of forty-eight columns, twenty-four on each side of the arch. The columns symbolize the States and Territories. Above the balustrade on pedestals, which form the continuation of the columns, are heroic figures fourteen feet high, representing Eloquence, Music, etc. Just below the cornice are the names of the States of the Union. The Peristyle affords a shady walk on a warm day, and its protection is not to be despised, for the colonnade measures 234 feet from each corner building to the Columbian portico. In the center of the Peristyle, and forming the water gate or outlet of the main basin, rises the majestic Triumphal, or, more properly speaking, Columbian Arch. The arch some what resembles the Arc de Triomphe of the Place du Carrousel in Paris. Between the two columns on each side are colossal figures representing the genius of Navigation and Discovery. Each of the figures stands on the prow of a vessel These pieces of sculpture are the work of Bela L. Pratt, of New York. Over the arch
are angels blowing trumpets. Just under the cornice on both the lakeward and landward sides appear the names of the great explorers, Cartier, Champlain, DeSoto, Ponce de Leon, La Salle, Cortez. High up on the pedestal which supports the Quadriga is an inscription which should make all Americans thrill with pride:

Ye Shall Know the Truth, and the Truth Shall Make You Free.

There is no more fitting monument to commemorate victories of either war or peace than a triumphal arch surmounted by a quadriga. A triumphal arch, if not properly treated, becomes simply a brutal manifestation of power, as in the Brandenburg Gate at Berlin. In the present instance the genius of Mr. D. C. French has given us a remarkably strong and satisfactory group. Four horses full of fire champ their golden bits and paw the ground. Each pair is held in check by a draped female figure. In the chariot stands a majestic figure of him to whom the western world is now doing honor—Christopher Columbus. On each side is an outrider with a banner. Although the Peristyle is built of staff, the clever artificers have wrought so cunningly that the whole appears to consist of white Pentelic marble. It is to be regretted that the beautiful Peristyle with its noble arch cannnot be perpetuated in more enduring materials, but it is safe to say that all who have viewed this beautiful creation will find it indelibly fixed upon the memory. 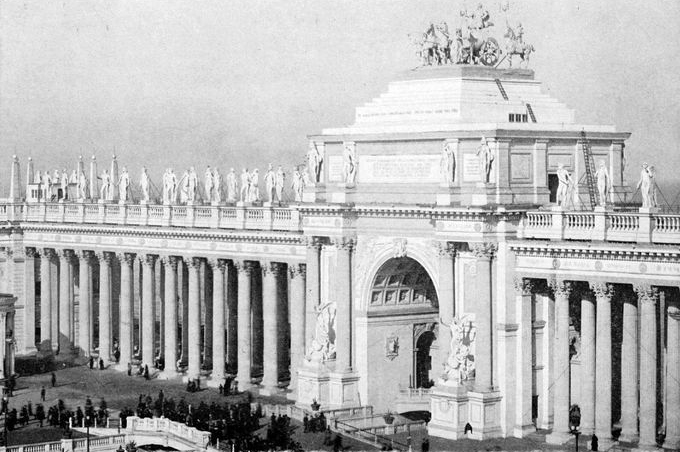 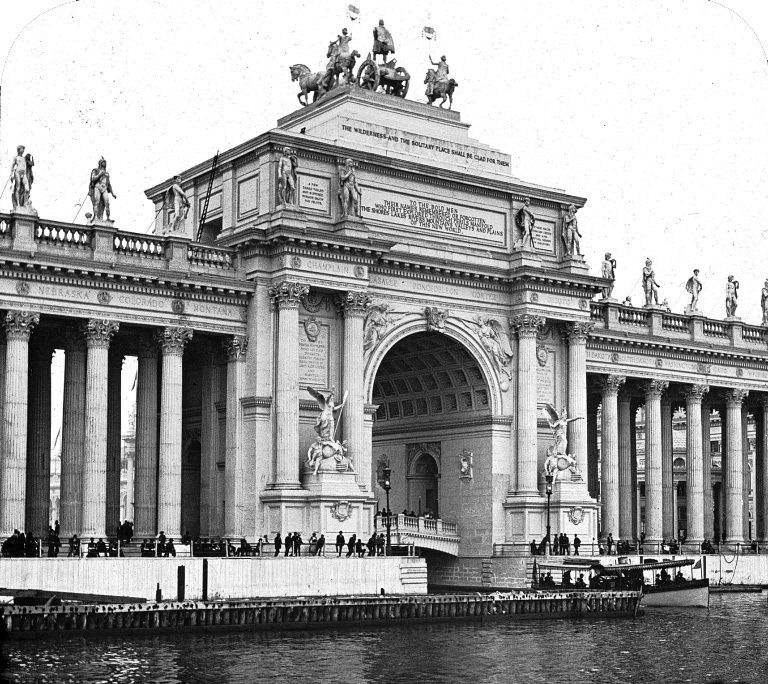 GRAND ARCH OF THE PERISTYLE.—In the memory of millions of people the grand colonnade or Peristyle, which reared itself between the great eastern basin and Lake Michigan, will remain as the most beautiful inanimate object upon which their eyes ever rested. The Peristyle was in the purest Phidian style, was five hundred feet in length and fifty feet in height, connecting the Casino and Music Hall. The Corinthian columns represented the different States and Territories. Along the top of the Peristyle appeared eighty-five allegorical figures all in heroic proportions. At the center the colonnade was broken by a vast triumphal arch supporting the famous group known as the Columbus Quadriga. Here the Discoverer was represented in a chariot drawn by four horses led by women, with heralds riding beside them. Columbus leaned on a jeweled sword, his head was thrown back, and the expression on his face was that of a man who had conquered all obstacles at last. The figure was fourteen feet in height. The whole group was full of life and vigor. Well executed groups on the pedestals of the arch represented the genius of Navigation. The feature was but one of many of the glorious Peristyle, one of the artistic triumphs of the Fair. Its cost was two hundred thousand dollars. On the evening of January 8, 1894, the Casino, Music Hall and the entire Peristyle were totally destroyed by fire. Of the host who witnessed the scene hundreds were in tears at the destruction of a thing so majestic and beautiful. 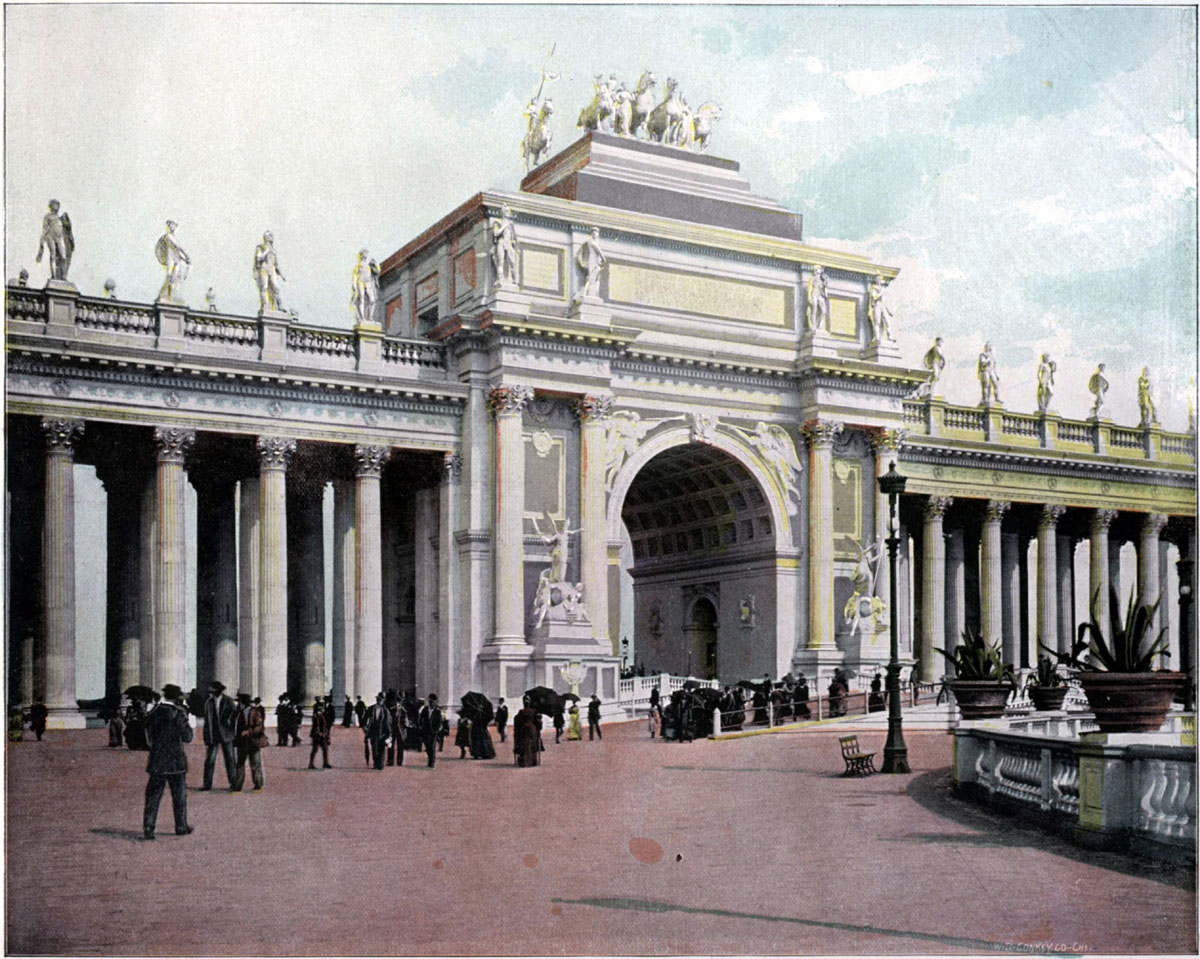