The Art Palace, suitably located in the norther section of the grounds and dividing the main edifices from state and foreign pavilions, is the only windowless structure of the Exposition. By the glazed ceilings a sufficiency of light is furnished, and through the structural design of the interior so modulated as to display to the best advantage the various classes of exhibits without conflict of shadow or reflection. To relieve them from monotony the exterior facades were adorned with mural paintings representing the history of art, and to give to them a play of light and shade the building was partially surrounded with a colonnade, its pillars, eight feet from the wall and nearly thirty in height, forming a covered walk or piazza extending from the central portal to the corner pavilions. To this portal broad flights of stairs, flanked by balustrades and terraces lead from a landing place on the northern arm of the lagoon. 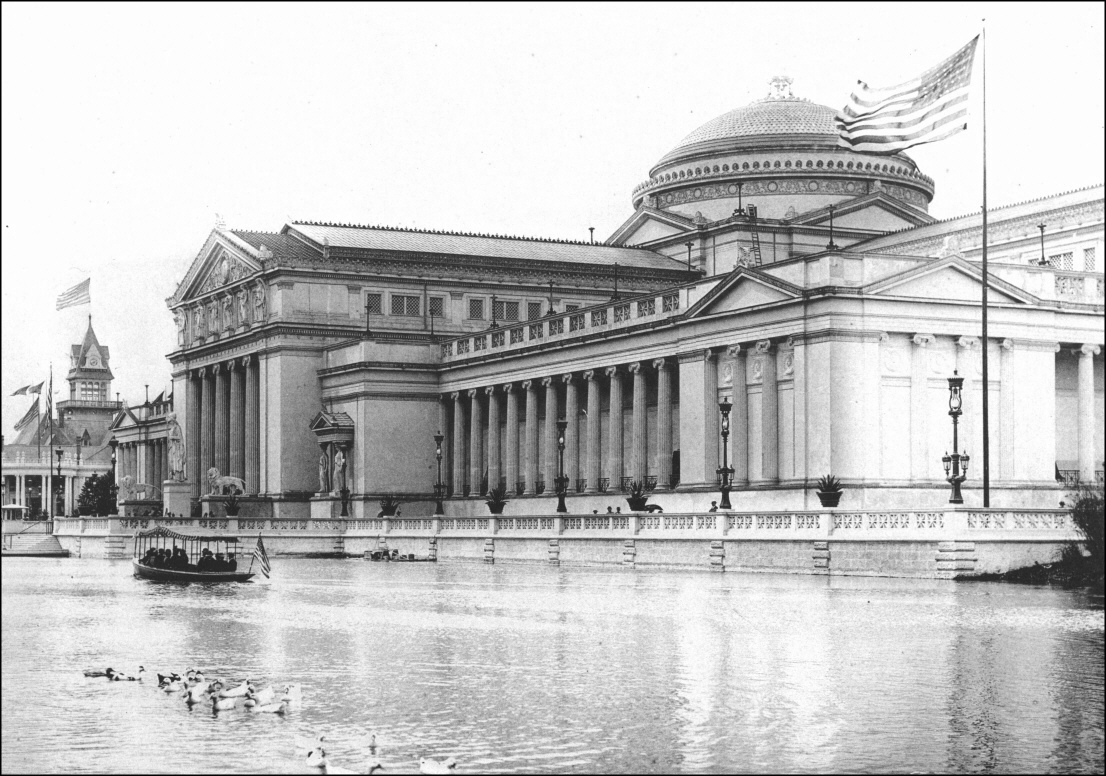 The general plan, apart from its decorative features, may be described as that of a continuous series of compartments, flat-roofed, sky-lighted, somewhat less than 50 feet high, and resting on a basement raised nine feet above ground, the entire structure forming an oblong, 500 feet in length by 320 in width, and covering an area of nearly five acres. At the corners are projecting pavilions of similar height, giving accent to the design. The clear stories and roofs over the several courts are fashioned with level sky-lines, and from their central point of intersection rises from a spacious rotunda to an elevation of 125 feet, and with nearly half that diameter, a dome surmounted by Martin’s heroic statue of Fame. The principal entrance-ways, in the centre of each of the main facades, are in the form of porticos, with columns of the Ionic order, and above them are attics, on the pilasters of which are figures resembling those of the temple at Agrigentum. In the middle of the end facades are similar porticos, but on a less imposing scale. 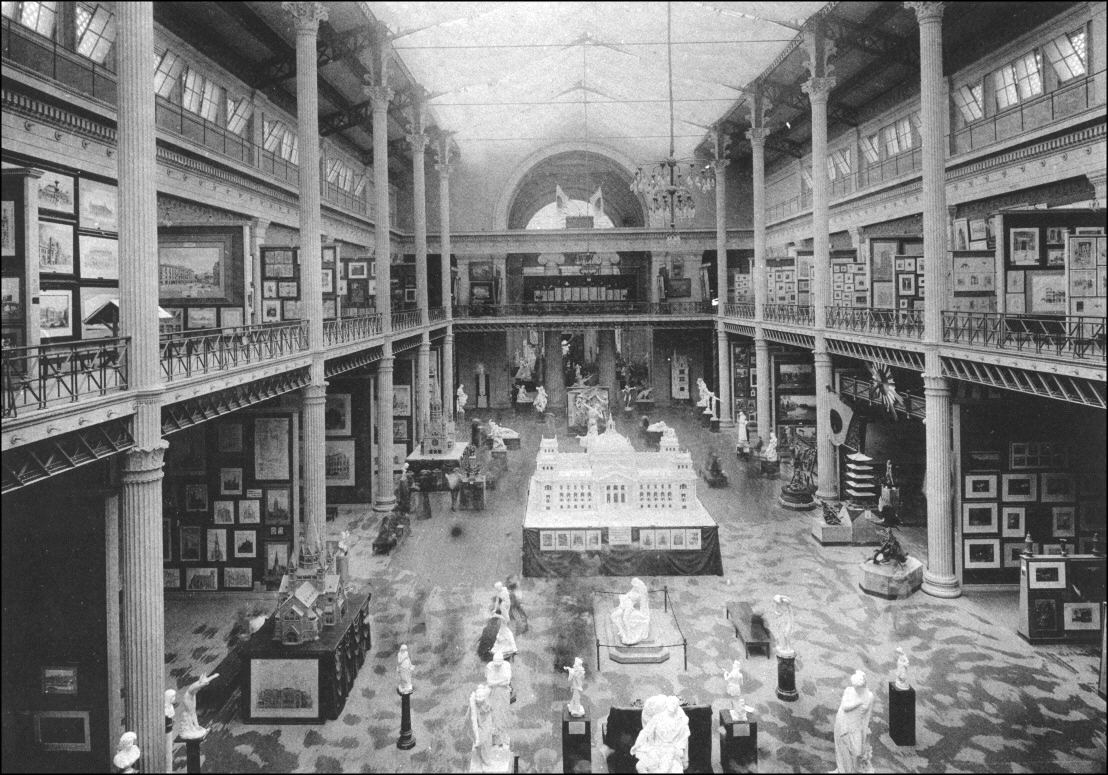 Interior of the Palace of Fine Arts 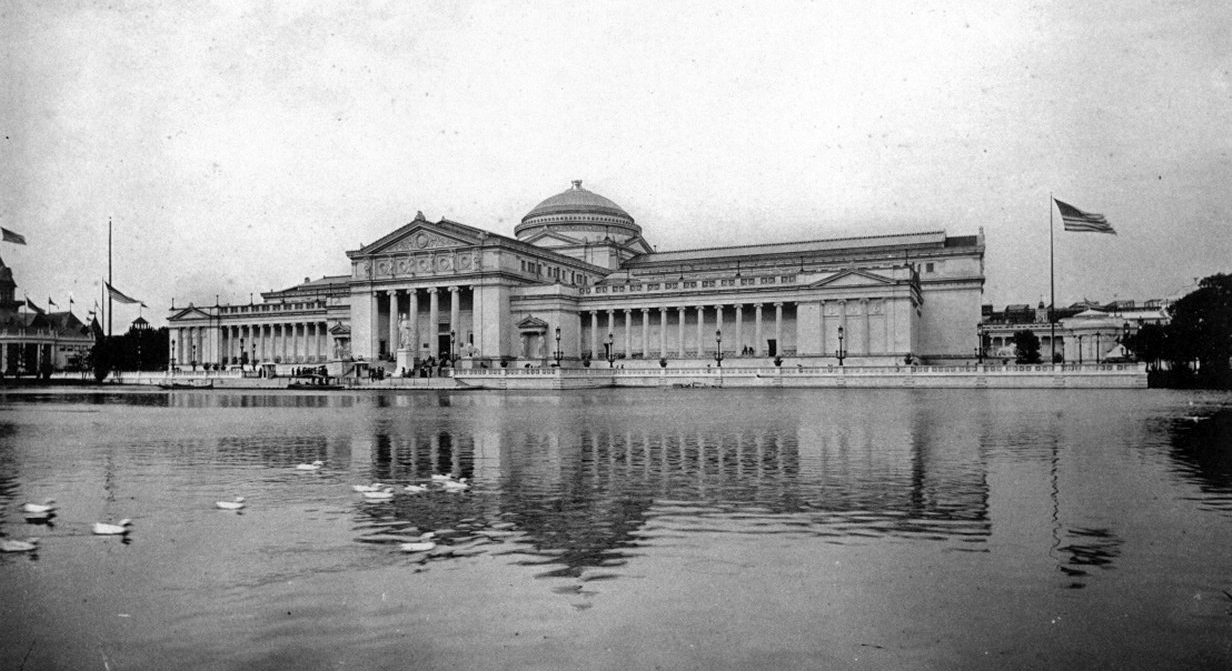 The Palace of Fine Arts (also known as the Fine Arts Building) at the 1893 World’s Columbian Exposition was designed by Charles B. Atwood for D. H. Burnham & Co. Unlike the other “White City” buildings, it was constructed with a brick substructure under its plaster facade. After the World’s Fair, it initially housed the Columbian Museum, which evolved into the Field Museum of Natural History. When a new Field Museum building opened near downtown Chicago in 1921, the museum organization moved and the former site was left vacant. 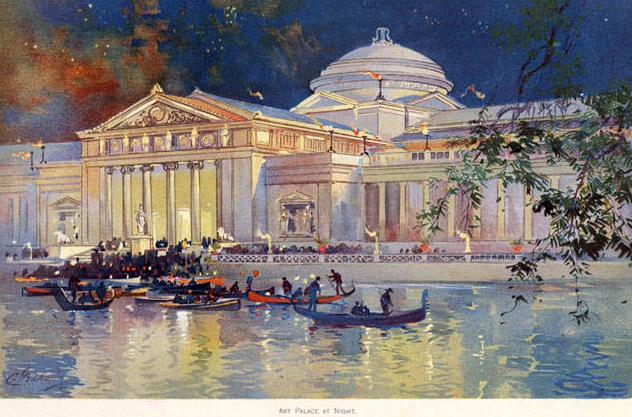 This building is now the Museum of Science and Industry. 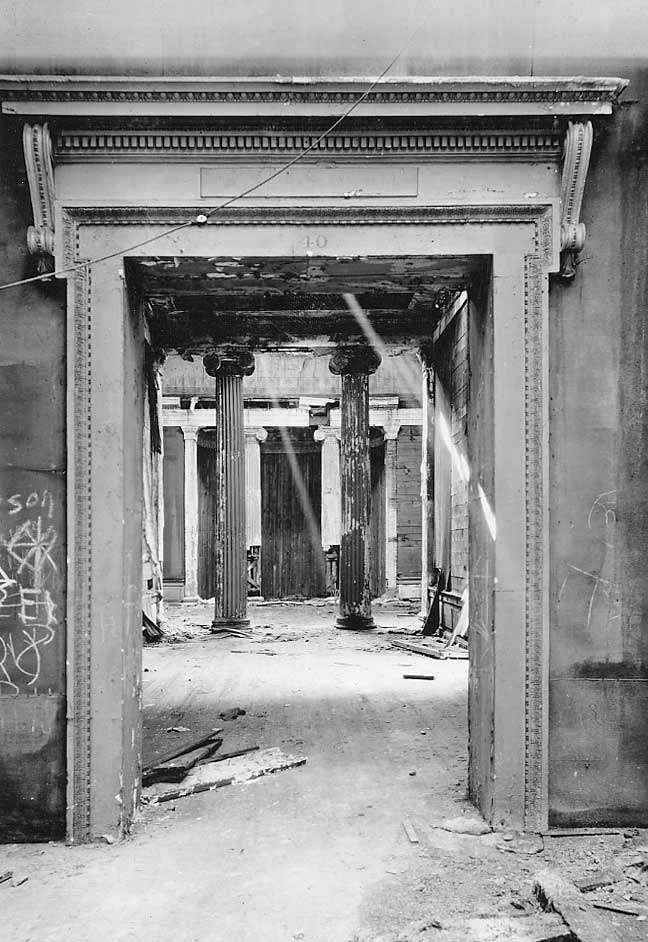 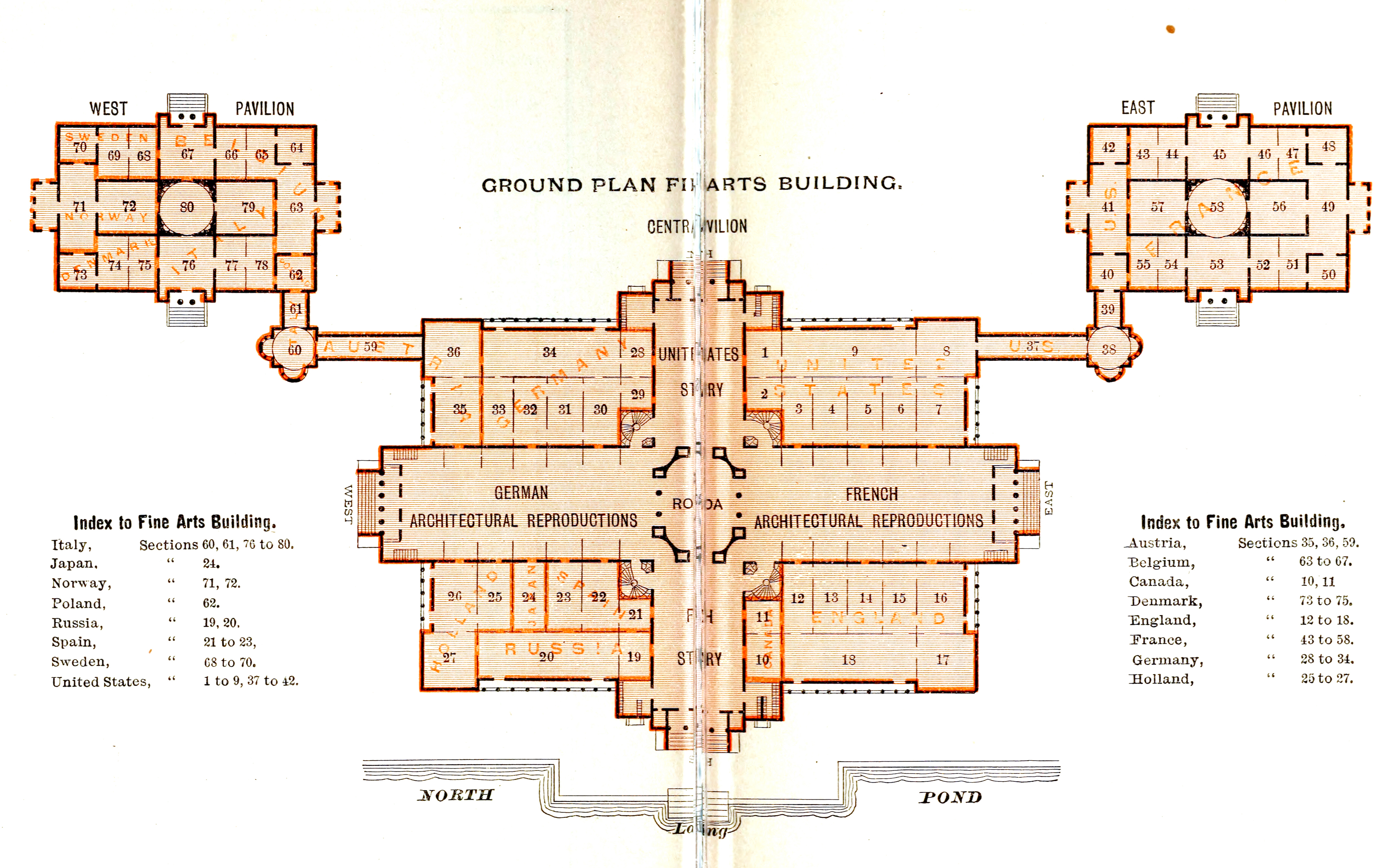 This building, which is expressly devoted to the exhibit of fine arts, painting, sculpture and statuary, is divided into four great courts known as the north, south, east and west courts. These lead into a space known as the central dome. Each space for exhibits is indicated by a number in connection with the court in which it is located. In connection with the main building are pavilions located at each corner, where exhibits are a lso shown. an exterior colonnade extending from each pavilion to the north and south courts. The paintings. sculpture and groups of statuary are each indicated in regular numerical order. The location of the exhibit will be found by referring to the name of the exhibitor and then glancing at the diagram. where the court. or gallery, containing the exhibit is shown, together with the number of the painting, etc. The exhibits in the loggias, and also on the second floor, are indicated in like manner. 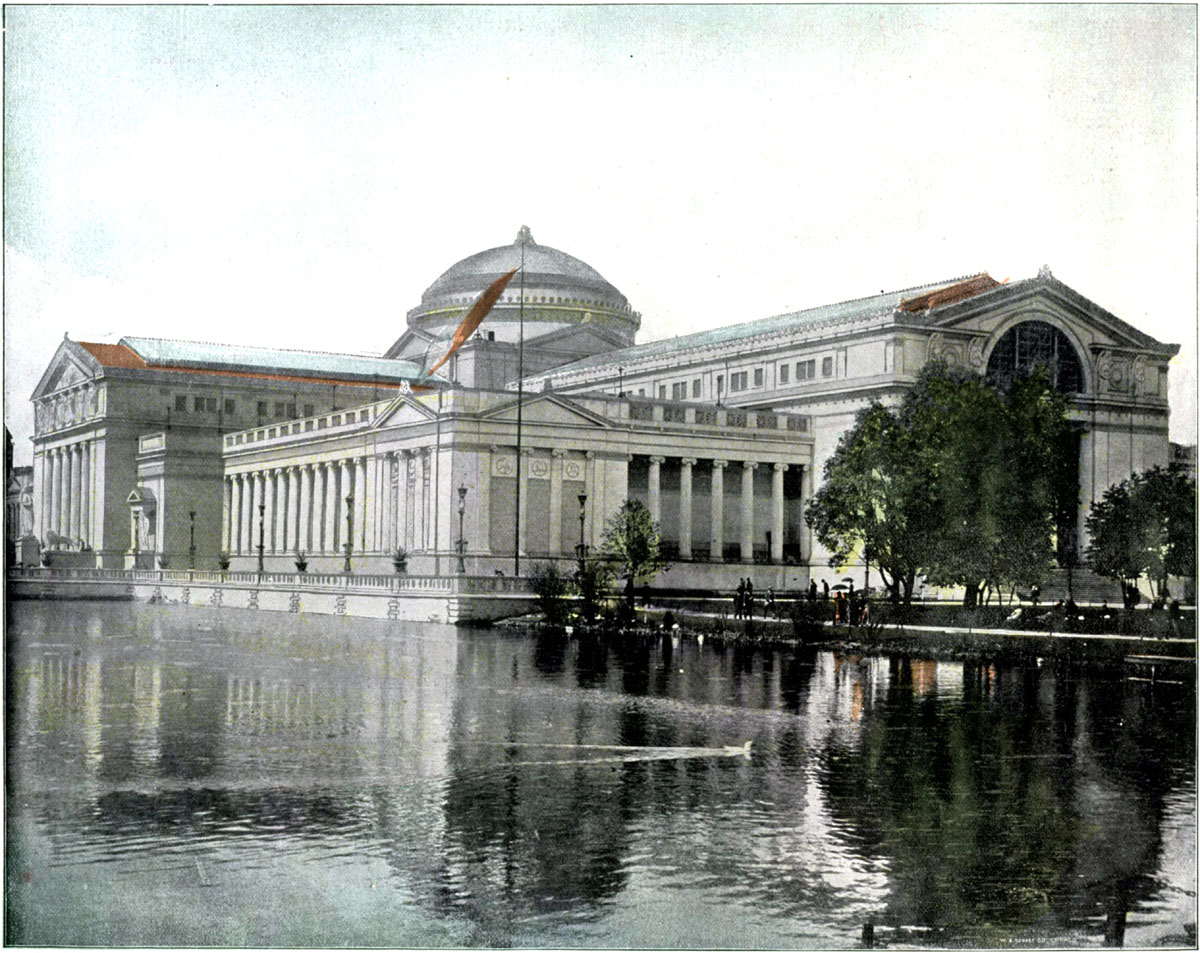 THE ART PALACE.—No structure among the many which made up the White City commanded more universal admiration than did the Art Palace, wherein were displayed the triumphs of artists from all over the world. It was a fitting receptacle for its marvelous displays. The style of architecture adapted in the building was of the Grecian-Ionic order and the blending and adaptation of what was most perfect in the past was such as to secure an effect, if not in the exact sense original, at least of great harmony and grandeur. The area of the main structure is three hundred and twenty by five hundred feet. It is intersected by a nave with a transept one hundred feet wide and seventy feet high, and a central dome sixty feet wide and one hundred feet high surmounted by a winged figure of Victory. The main structure is surrounded by a gallery forty feet in width. It has two annexes one hundred and twenty by two hundred feet in dimensions, each with exterior colonnades. Because of the enormous value of the statues and paintings exhibited—the buildings’ contents were estimated to be worth five million dollars—it was necessary to make the Art Palace fire-proof and it was so built, at a cost of six hundred thousand dollars. It so remains a permanent structure and is now occupied by the Field Columbian Museum, one of the great Fair’s heritages to the public. The view of the building from the lagoon on the south, from the broad highway on the north and the areas of lawn in other directions are such as to afford a just idea of its excelling beauty. It stands today without peer a triumph of architecture. 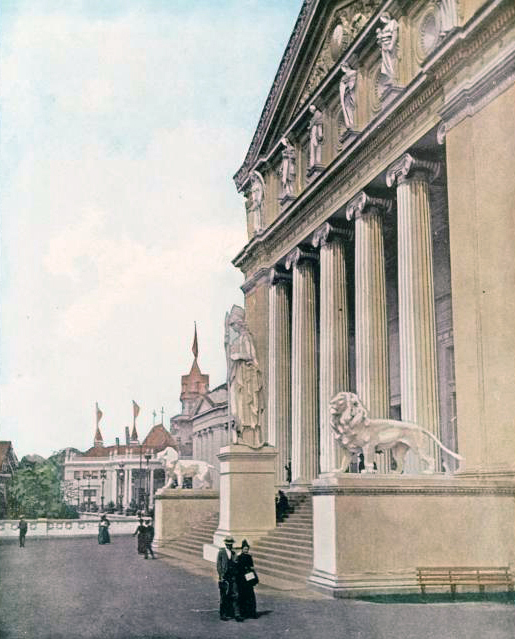 THE WESTERN ENTRANCE TO THE ART PALACE—Some millions of people familiar with the appearance of the great portal shown in the illustration below. The western entrance to the main building of the Art Palace was the popular one. It opened upon the great thoroughfare running north and south along the west side of the Exposition grounds, was close to the popular Fifty-seventh street entrance close also close to the Michigan Building, that structure which, from the liberality and broad national spirit of the representatives of that strong state, became something like a general club house and resting place for everybody. Of the architectural or particularly charming features in any way connected with the entrance itself, there is little to say. It was in tone with the general perfection of that grand structure which, somehow, gradually displayed in other artistic creations by active men of the present day from all over the world. It was the main gateway to what surpassed interiorally in the same degree and in the same manner that it surpassed exteriorally every other exhibit at this most wonderful of expositions. From any point of view the art display at the Exposition caught the drift of hosts to the same extent that its splendid casing caught the eye of the myriads, and there was seldom an hour of the day that this particular entrance was not thronged with people surging in and out of the building.