The new home of the Field museum, final plans for which now are being inspected by the south park commissioners as a part of their contract in furnishing a site for the structure, will be the finest museum building in the world. According to Harlow N. Higinbotham, president of the museum trustees, the Louvre and the British museum will be compelled to yield the palm for structural equipment, and Chicago will have another “world wonder”—provided, of course, that A. Montgomery is unsuccessful in his efforts to prevent the construction.

The drawings prepared by D. H. Burnham & Co. provide for a structure which will be unlike anything ever built in Chicago, with the exception of the World’s Fair buildings. Its main facade will extend 705 feet, facing Michigan avenue, the central pooint and main entrance being opposite the foot of Congress street. The floor space of the structure will be much larger than that of the building now occupied by the institution, which has miles of halls and corridors. The plat of ground to be devoted to the structure is 1,300 feet long and 800 feet deep. This provides for two wings to be erected at either end of the main section.

The building will have four entrances, one on each side, and those facing the lake and Michigan avenue will be adorned with heavy stone pillars. Inside, eight long passageways parallel with Michigan avenue will connect the exhibition rooms with the transverse halls. Work will begin not later than Feb. 15. 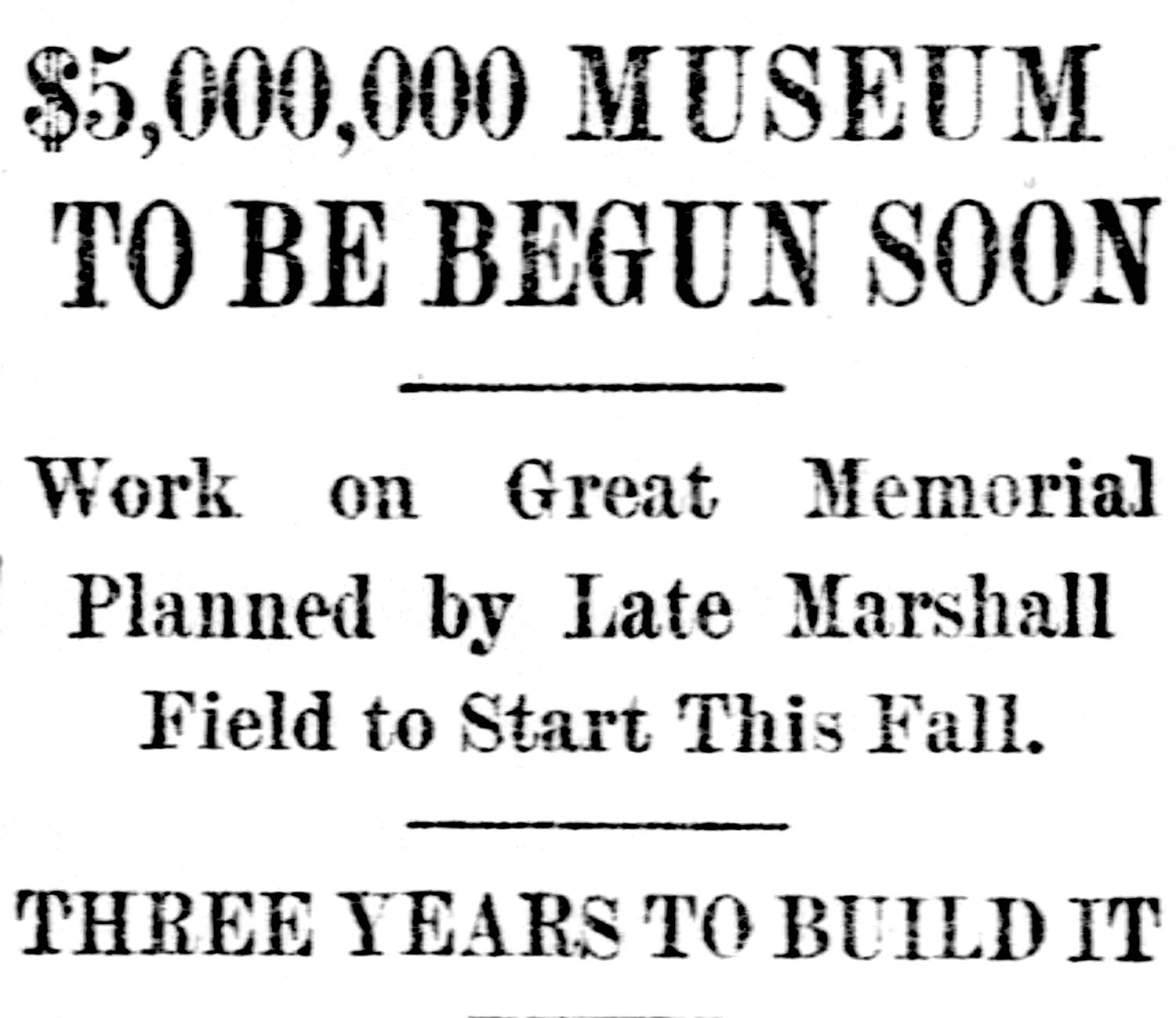 As soon as the few remaining obstacles are removed, one of the most stupendous pieces of construction work planned for Chicago—the erection of the new $5,000,000 Field Museum of Natural History—will be under way. This building, the foundations of which are to be started within the year, will take three years for completion and will furnish work for completion and will furnish work for an army of building laborers of all trades and crafts.

The imposing structure will be built on a terrace six feet high at the southern extremity of Grant Park, facing northward on Twelfth Street, extended across the Illinois Central tracks. The thoroughfare which will run in front of the structure will be joined with the proposed outer drive, connecting Grant and Jackson Parks, by means of a bridge.

Will Be Built of White Marble.
Plans for the building have been made by Graham, Burnham & Co., and it will add ti the monumental appearance of the city in compliance with the Chicago Plan. The exterior of the superstructure, which will rise about eighty feet above the terrace, will be entirely of Georgia marble. It will be treated with a monumental order of Greek ionic architecture, the principal fronts being divided into a large pedimented central pavilion and two long winds terminated at each end. This order rests upon a stylobate, with windows for the working floor.

The building has been planned and designed to accomplish three purposes:
1. The most perfect exhibition rooms that could be arranged for display of the millions of dollars’ worth of scientific collections it wil house.

2. The adequate housing and equipment of the scientific working part which belong with such collections.

3. The erection of a building which would measure up to the highest standard of architecture worthy of a structure to be built as a lasting memorial and monument for the city and founder. 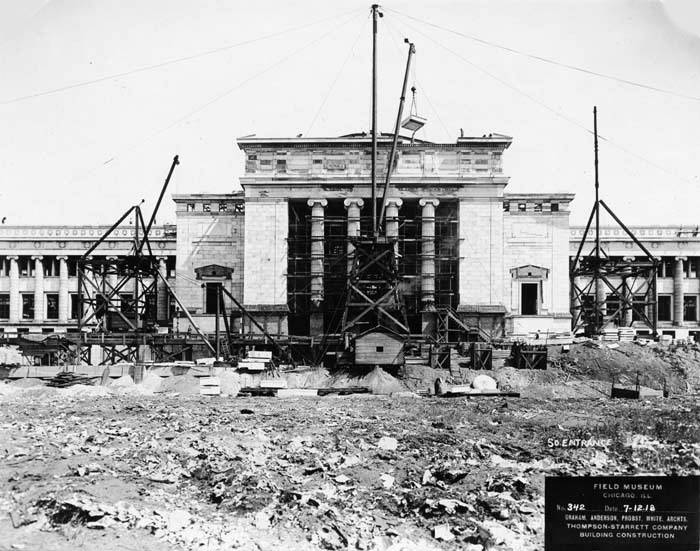 The front of the museum will be 700 feet long. It will be 350 feet deep. Its general arrangement provides for a great central hall or nave, rising the entire height of the building, flanked by transverse exhibition halls on both sides, these exhibition halls being again united by transverse halls at each end of the building. The building will be three stories high on each side of the central hall. There also will be a basement. The entire building, except the basement and third floors, will be used for exhibition purposes.

Will Have Large Laboratories.
The equipment of the basements and third floors will include extensive laboratories, with all the facilities and devices of modern science; a large photographic section, a complete illustrating and printing division, studios for imitation and production, and suites of work rooms for artists, artisans and preparators. In all these particulars the museum has been greatly hampered in the past. 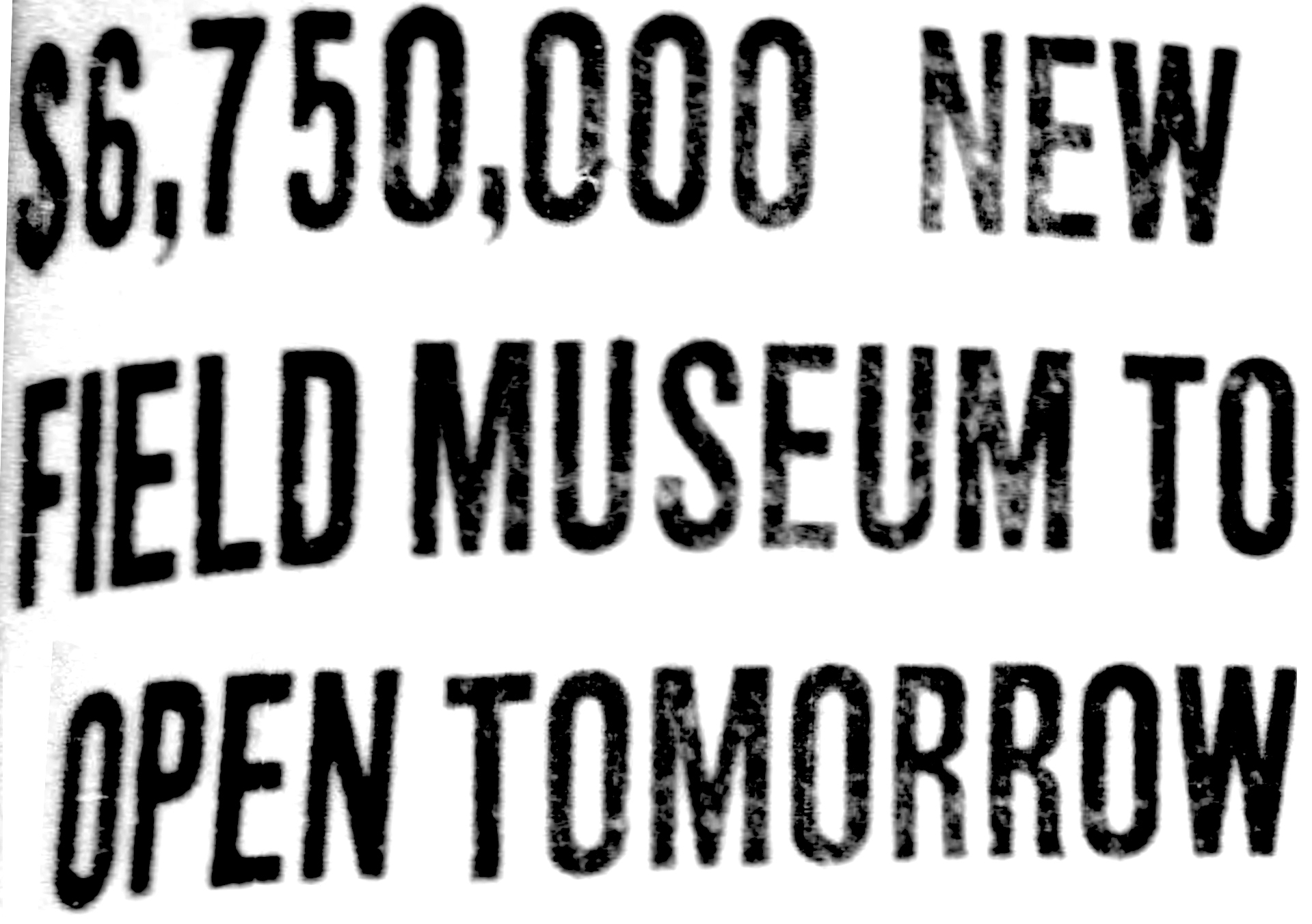 Final preparations for opening the new Field Museum of Natural History in Grant Park tomorrow were completed yesterday—just one year after the work of transferring the 560 carloads of exhibits from the old structure in Jackson Park was started. Witnessing the finishing touches were Stanley Field, president of the board of directors; D. C. Davis, acting director, and John Glynn, superintendent.

When the doors of the $6,750,000 structure are are thrown open to the public, guards attired in French gendarme uniforms will be on duty to show visitors around. The decision to dress these men in the quaint uniforms with which were worn by the guards at the world’s fair and later in the old museum was made by the board of directors to maintain the atmosphere of the old building.

Museum Open Every Day.
The museum will be open every day after tomorrow between 10 a.m. and 4 p.m., it was announced. Admission will be free on Thursdays, Saturdays and Sundays. On other days a charge of 25 cents will be made to cover incidental expenses.

The first exhibition room after the entrance is passed is the Stanley Field Hall, where is seen an exhibit of East Indian jewelry of various ages. A Chinese gateway nineteen feet high and more than sixteen feet wide adorns the southern end of the hall. The work was carved in teakwood by inmates of a Chinese orphanage maintained by missionaries near Shanghai. Close by can be seen a number of bronze bathtubs used by ancient Romans. 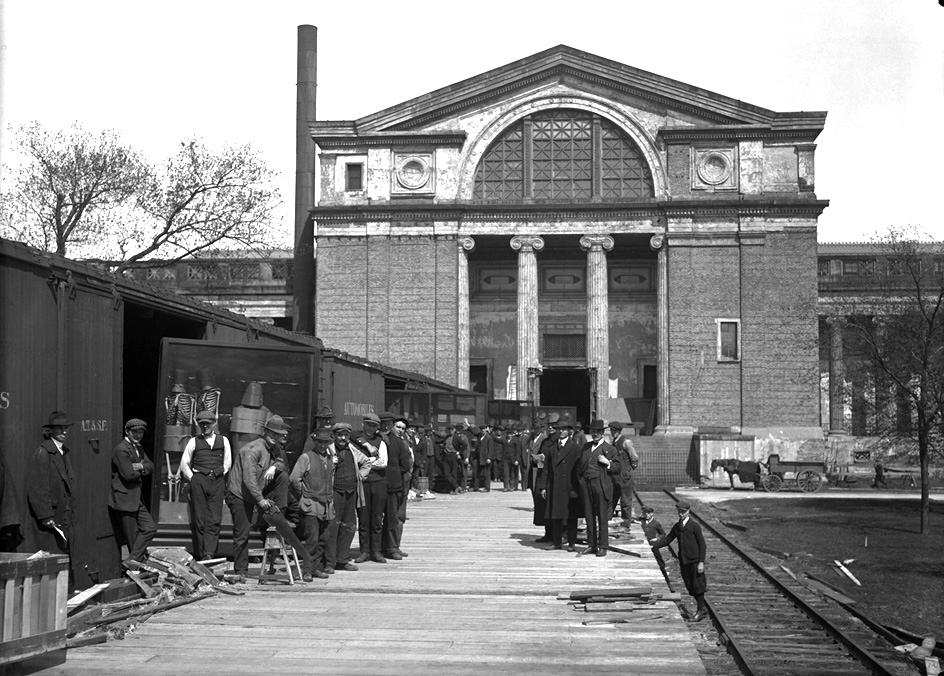 The Egyptian section contains mummies and coffins thousands of years old, ancient glassware and pottery work showing the artistic ability of one of the earth’s first civilized peoples.

Another striking exhibit is a roomful of mounted prehistoric animals of Africa, among them being the mastodon. Near by is an Irish deer of the post-glacial period, and a great herbivorous dinosaur which was found by scientists in Colorado in 1901.

The first floor also includes the James Simpson Theater, where 1,000 persons can be accommodated at scientific lectures which are to be given from time to time. 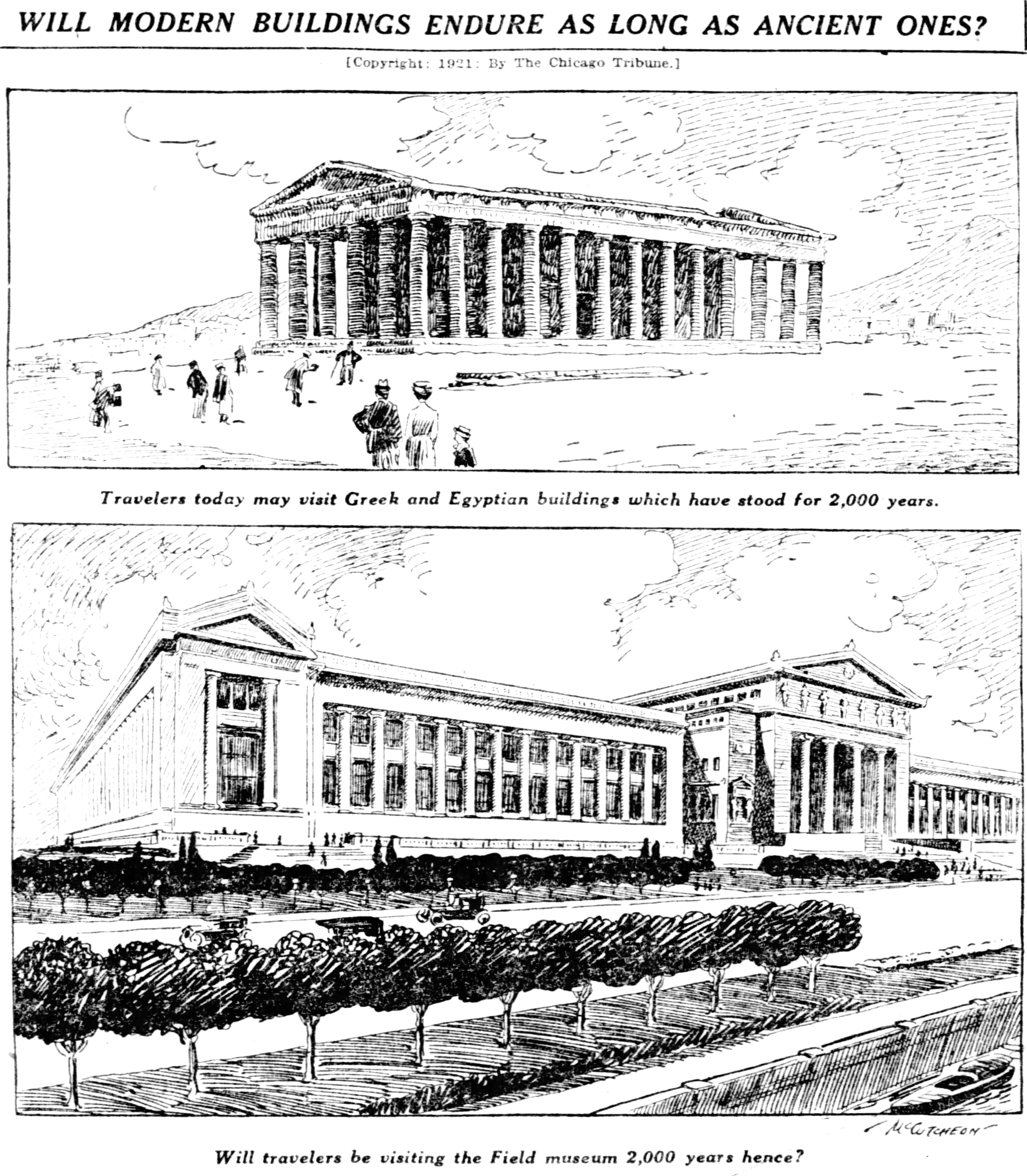