It is Chicagology’s policy not to compare events that happened a century ago to current events. However, since the Aunt Jemima brand was nationally introduced at the 1893 Columbian Exposition and their fictitious cook was a resident of Chicago, a full history of the Aunt Jemima name and as well as of her image of the character is warranted.

Herewith is presented a picture of the R.T. Davis Mill Company’s exhibit at the World’s Fair. No Exhibit from any part of the United States or the world has attracted more universal attention from the press in general than this exhibit. To say that it si beautiful, and appropriate indeed, does not do it justice, (as those who have seen it will bear us out in saying.) It is so much ahead of mill exhibits from other states, that there is no comparison whatever.

The exhibit is doing St. Joseph a great deal of good, perhaps giving her the best general advertisement we have ever had. It is to be hoped the Davis Mill Co., will be amply rewarded for their expenditure, receive a very greatly increased support from the citizens of St. Joseph for this, another evidence of the public spiritedness of this firm.

The display is located in section H, tier of posts 5, east balcony, and is in the shape of a large barrel of flour, and is the largest flour barrel in the world. It is 16 feet long, 12 feet in diameter at the center and 10½ feet at each end. The heads of the barrel are made of plate glass, each head a single piece, being the largest piece of plate glass at the World’s Fair. The trade mark of the Davis Mill Company and a facsimile of the brand of the Royal No. 10 flour are lettered in gold leaf, tinged with blue and black. Behind the glass heads is filled with the Royal No. 10 flour, which throws out the large gold letters in magnificent bold relief. The gold letters are sixteen inches in height, and placed in circular form around the barrel head, which adds greatly to the beauty of the exhibit. At each end, and just over the large glass heads, is placed a canopy sixteen feet high and six feet deep, in circular form, completely covering the end of the exhibit. On each corner of this canopy, and in the center of the circle of the canopy is placed a barrel of flour with glass heads, and on the heads are lettered in gold the brands manufactured by the Davis Mill Company.

The white flour behind the gold letters, mounted on the circular canopy, s most magnificent indeed. On top of all this; and just over the large barrel, running the full length, is placed in gold leaf letters the sign of the R.T. Davis Mill company.

In the center of the barrel is made a reception room which is entered by doors from either side of the barrel. In this room the Davis Mill Company welcomes and expects to entertain their numerous customers and friends during their visit to Chicago the next five months. 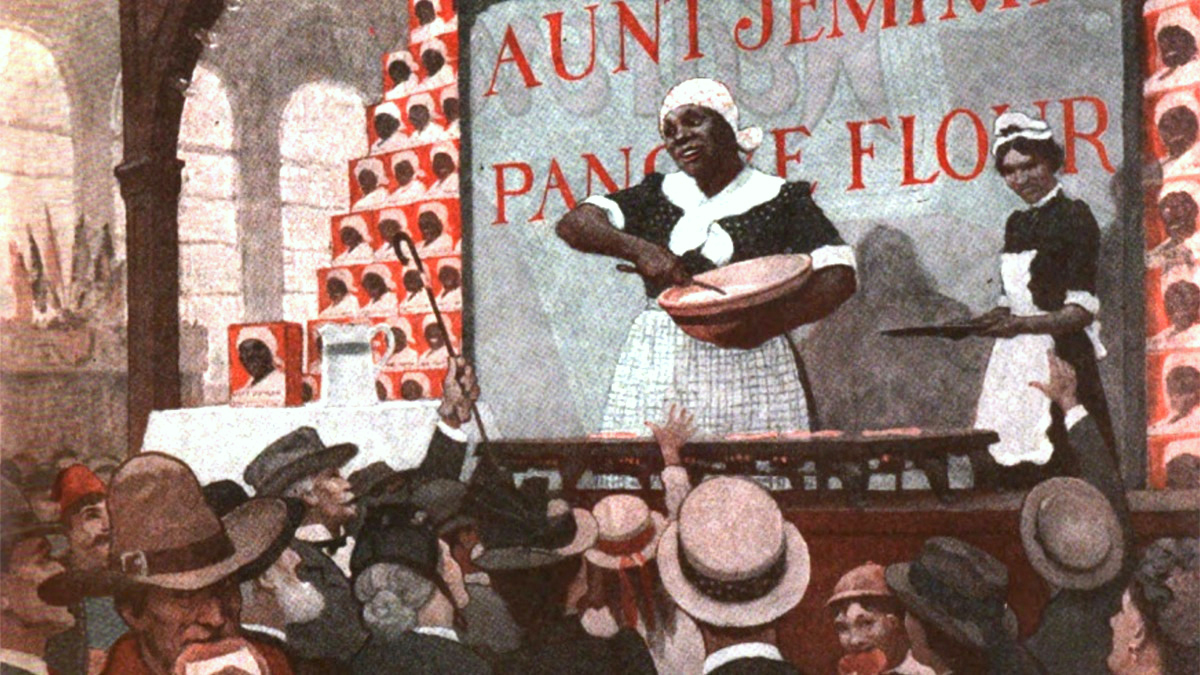 Recreation of the Aunt Jemima Booth at the World’s Columbian Exposition
Packaging shown was created around 1914.

In addition to their flour exhibit, they have erected an exceedingly fine and tasty booth for their Aunt Jemima Pancake flour. This booth is built of Aunt Jemima boxes neatly arranged, and the first one to greet you on approaching the stand is the familiar face of old Aunt Jemima. From the stand are served hot Aunt Jemima Pancakes to the thousands who cluster around this magnificent display. No person from St. Joseph of its vicinity, while visiting the World’s Fair can afford to miss this display. You will find the St. Joseph daily papers there, also all the daily and weekly papers of the North Missouri towns and cities.

A registry is kept of all visitors to the World’s Fair from this city and surrounding country, which is proving quite a great convenience to our people in locating and meeting friends. The Daily Herald is kept on file for the benefit of those visiting the Fair. 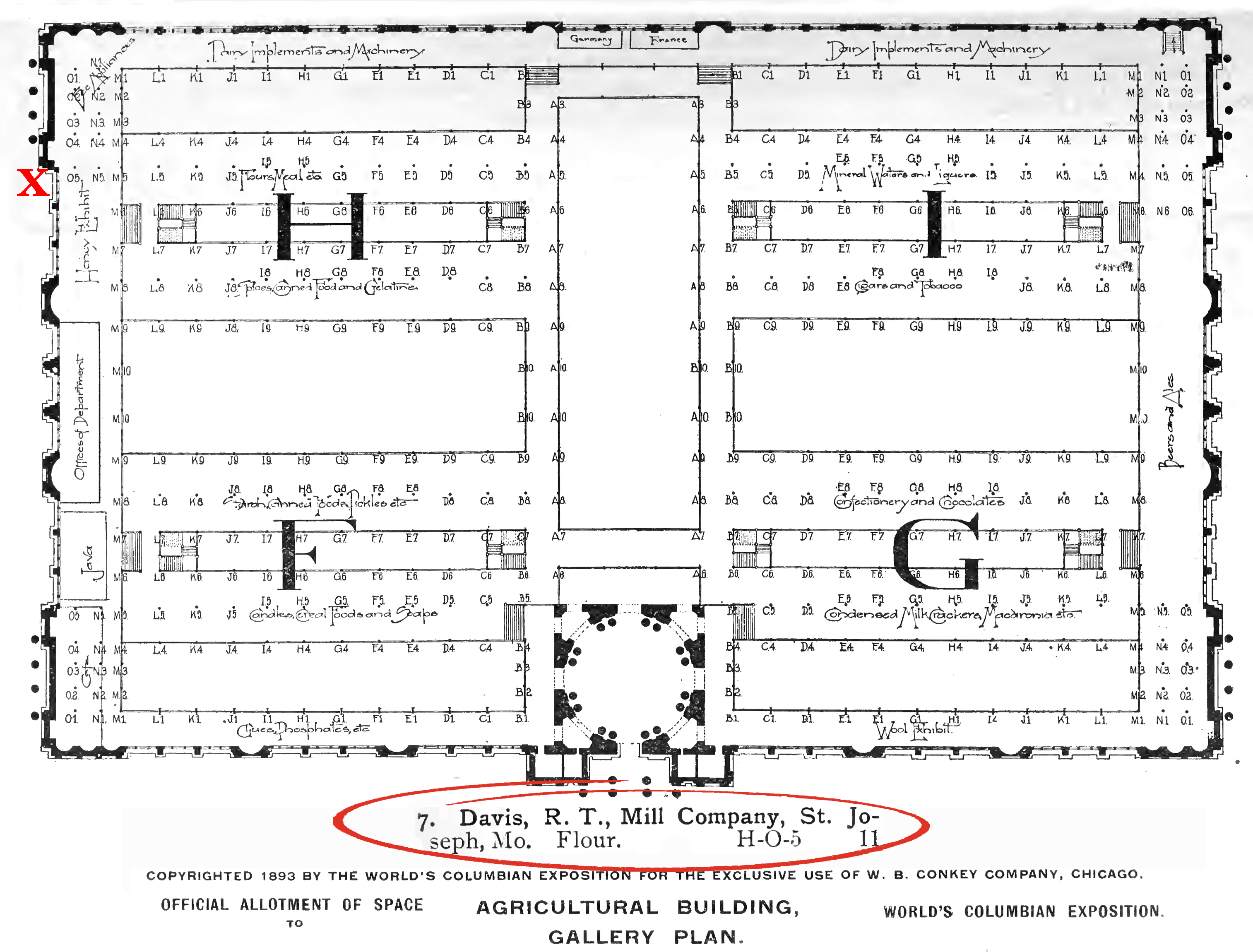 FAMOUS AUNT JEMIMA.
The Original “Auntie” From Whom the Well-Known Pancake Flour Took Its Name.
Nearly every one who relishes a dish of delicious steaming pancakes has heard of Aunt Jemima’s Pancake Flour, “Scientifically Prepared and Manufactured only by R.T. Davis Mill Co., St. Joseph, Mo.,” as the advertisements say. But few know of its interesting origin.

An old and dilapidated cabin stands on the banks of the Mississippi near the junction of that river with the Red River, which is pointed out to passengers on the river steamers as one of the sights of the section.

This was for a long time the home of the famous colored cook, Aunt Jemima. She prided herself more than anything else upon her ability to prepare delicious pancakes, and many were the parties that left the steamers and climbed the bank in order to sample the delicious products of her skill.

A representative of the R.T. Davis Mill Co.once chanced to be a member of one of these parties and immediately set about securing the receipt (recipe) from which she compounded her pancake flour.

At first Aunt Jemima flatly refused. But after a handsome offer was made her she relinquished it and accepted a position with the R.T. Davis Mill Co. to superintend the manufacture of Aunt Jemima’s Pancake Flour.

At the World’s Fair this same Aunt Jemima dispensed pancakes to the hungry millions from the R.T. Davis exhibit.

Aunt Jemima’s Pancake Flour has only been introduced in the East, as the entire output has heretofore been consumed in the West where it is immensely popular.

Its manufacturers are now equipped to supply this market and Easterners can have in their own homes or restaurants pancakes as delicious as those served in Aunt Jemima’s cabin on the Mississippi. 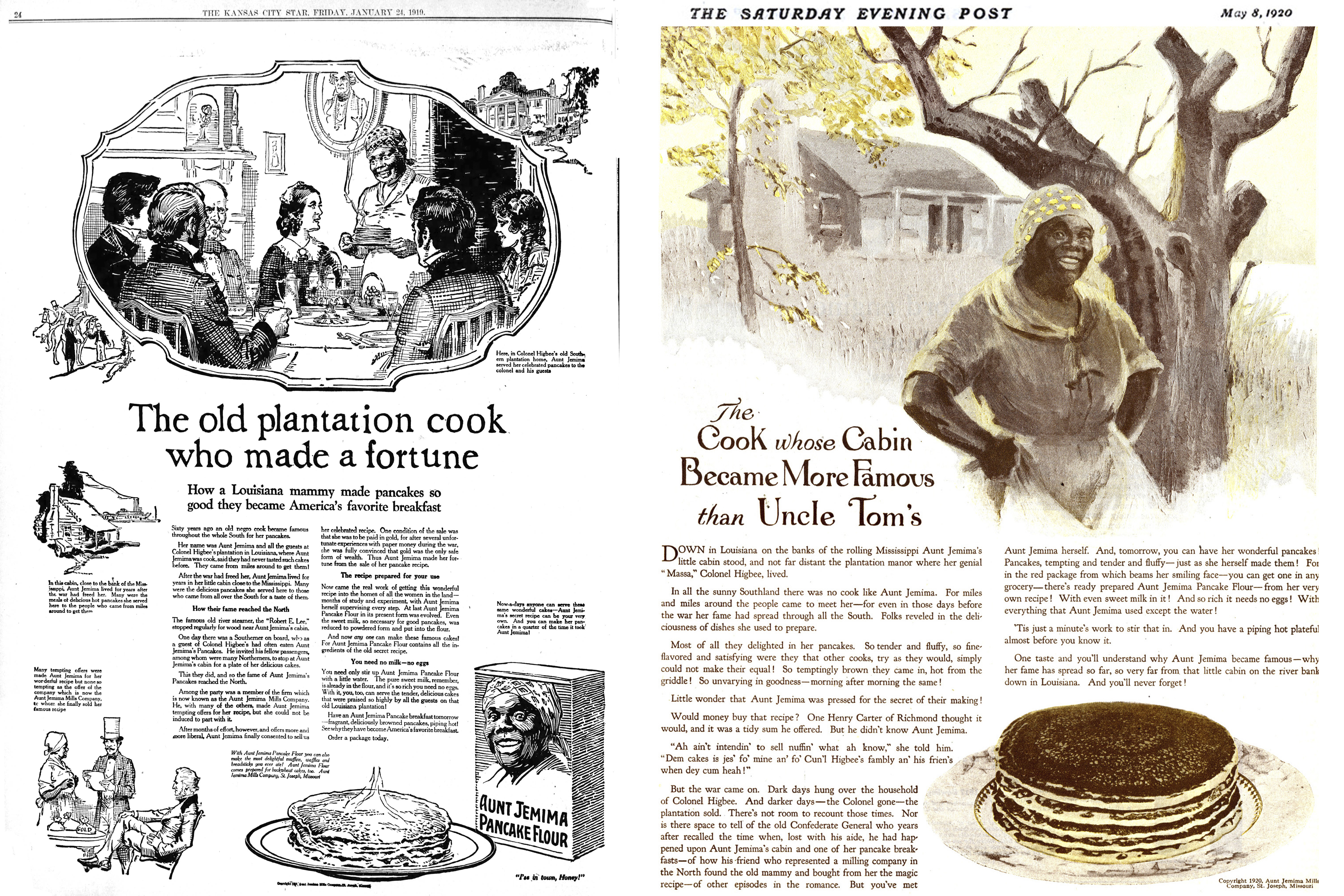 The Aunt Jemima myth was promoted through advertisements such as the two shown above.
LEFT: Kansas City Star, January 24, 1910
RIGHT: Saturday Evening Post, May 8, 1920 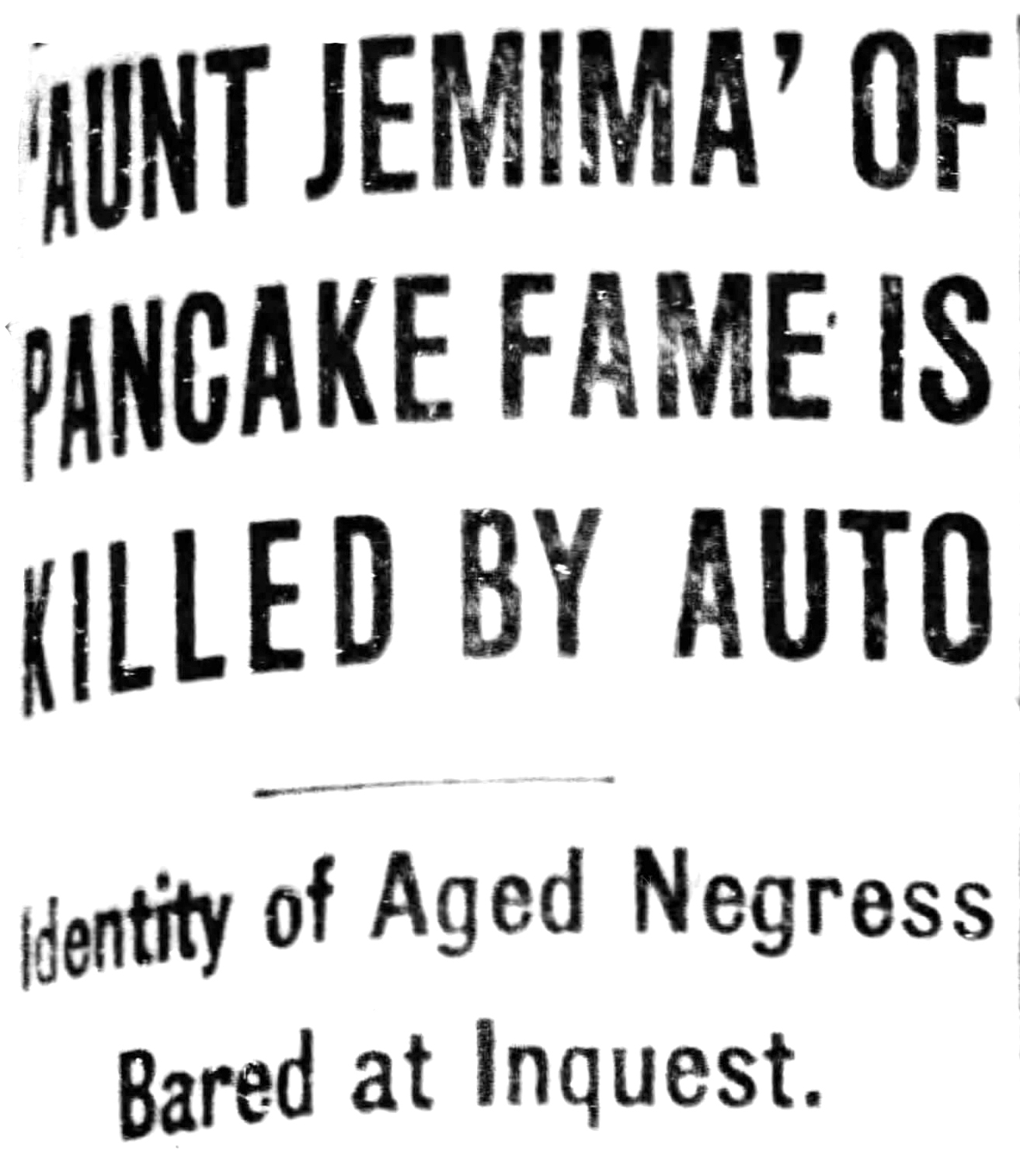 Pancake season is coming, but in some Chicago households this fall the sizzling of the griddle will bring memories tinged with sadness.

“Aunt Jemima” is dead. The aged Negro woman whose ability to make “flapjacks” was capitalized by millers, whose bandana wreathed smile forms a mental picture for thousands of lavers of “a plate of wheats” and whose skill with the pancake turner furnished amusement for and drew the envy of those who have attended expositions and fairs ever since the Chicago World’s fair of 1893, fell a victim to an automobile.

It was not until Deputy Coroner Joseph Gubbins held an inquest yesterday into the death of Mrs. Nancy Green, 4543 Indiana avenue, killed in an automobile accident, that it became known that her death marks the passing of an interesting character who will be mourned not only by the Negro race but by numerous wealthy Chicago families as well. For Mrs. Nancy Green will live longest in memory as “Aunt Jemima.”

Came Here as Nurse.
“Aunt Jemima” was born in Montgomery County, Ky., in 1834 and came to Chicago as a nurse for the Walker family. She nursed and made pancakes for the late Circuit Judge Charles M. Walker, chief justice of the Municipal court, and his brother, now a leading north side physician, when they were boys. They spread their fame among their boy chums, and before long “Aunt Jemima’s pancakes” became a common phrase in Chicago when good things to eat were discussed.

A milling concern heard of her, searched her out, obtained her recipe and induced her to make pancakes at the World’s fair. After that she went from one exposition to another demonstrating her skill. There was one, however, that she refused to attend—the Paris exposition. All inducements that could be made were put forward bu “Aunt Jemima” refused to budge.

Wouldn’t Go on Ocean.
“No, su,” she said. “They ain’t no man gonna git me th’ watah. I was bo’n in this country an’ I’m gonna die heah, not somewheah ‘twixt heah an’ somewheah’s else.”

She was of the first colored missionary workers and one of the organizers of the Olivet Baptist church, now the largest colored church in the world, with a membership of over 9,000.

“Aunt Jemima” was killed while standing on the sidewalk under the elevated structure in East 46th street. A car driven by Dr. H.S. Seymour, a druggist at 3700 S. State street, collided with a laundry truck, and then hurtled on to the sidewalk. Adams1 was absent from the hearing yesterday and the investigation was continued until he can be present.

Brief History of R.T. Davis and the Aunt Jemima Brand.
The self-rising pancake flour was created by a pair of speculators, Chris Russ and Charles Underwood, in St. Joseph, Missouri, in 1889. The duo had purchased a bankrupt mill and planned to make it successful by developing a new product that would spur demand for their flour. Despite their lack of culinary expertise, or perhaps because of it, the two settled on developing a foolproof and less labor-intensive pancake batter that would require only the addition of water. They experimented with a variety of recipes in the summer of 1889 before settling on a mixture of wheat flour, corn flour, lime phosphate and salt.

However, Rutt and Underwood could not raise the necessary capital to promote and market the product effectively. They soon ran out of money. After registering the trademark in 1890, they sold their interests to the R. T. Davis Mill and Manufacturing Company, also of St. Joseph, Missouri. Davis was more financially able to promote the product, having large manufacturing facilities, money, and an established reputation with wholesale and retail grocers throughout the Missouri Valley. A 50-year veteran of the milling business, he designed a promotional campaign that has been revered for years by many advertisers, promoters, and marketers.

He transformed the local product into a national one by distributing it through a network of suppliers and by creating a persona for Aunt Jemima, which was inspired by an 1875 minstrel song, Old Aunt Jemima by Billy Kersands. Mr. Davis did a search for a “living trademark” and found Chicagoan Nancy Green (1834-1923) who worked for a judge.

The Evolution of Aunt Jemima

As for the image of Aunt Jemima, Nancy Green was followed by Anna Robinson, whose image was changed to a painted portrait on the packaging of the mix. Next was Chicago blues singer and actress Edith Wilson. She was the first Aunt Jemima to appear in television commercials.

After Wilson there was Ethel Ernestine Harper, a former school teacher and actress. The fourth Aunt Jemima was Rosie Hall who was an advertising employee at Quaker Oats until she discovered their need for a new Aunt Jemima. After she died, Hall’s grave was declared a historical landmark.

The slang term “Aunt Jemima” falls within the “mammy archetype” and refers to a friendly black woman who is perceived as obsequiously servile or acting in, or protective of, the interests of whites.

Therese (Tess) Gardella (December 19, 1894 – January 3, 1950)
Therese Gardellawas a white Italian-American stage performer, but her usual stage persona, and actual stage name, was “Aunt Jemima”, which she performed in blackface. It was in this persona that she played Queenie, the African-American cook, and wife of Joe, the deckhand, in the original Broadway production of “Show Boat” in 1927, as well as the first Broadway revival in 1932. She was the only white performer in the entire cast to play a role in blackface. She also appeared in the prologue of the first film adaptation, Show Boat (1929).