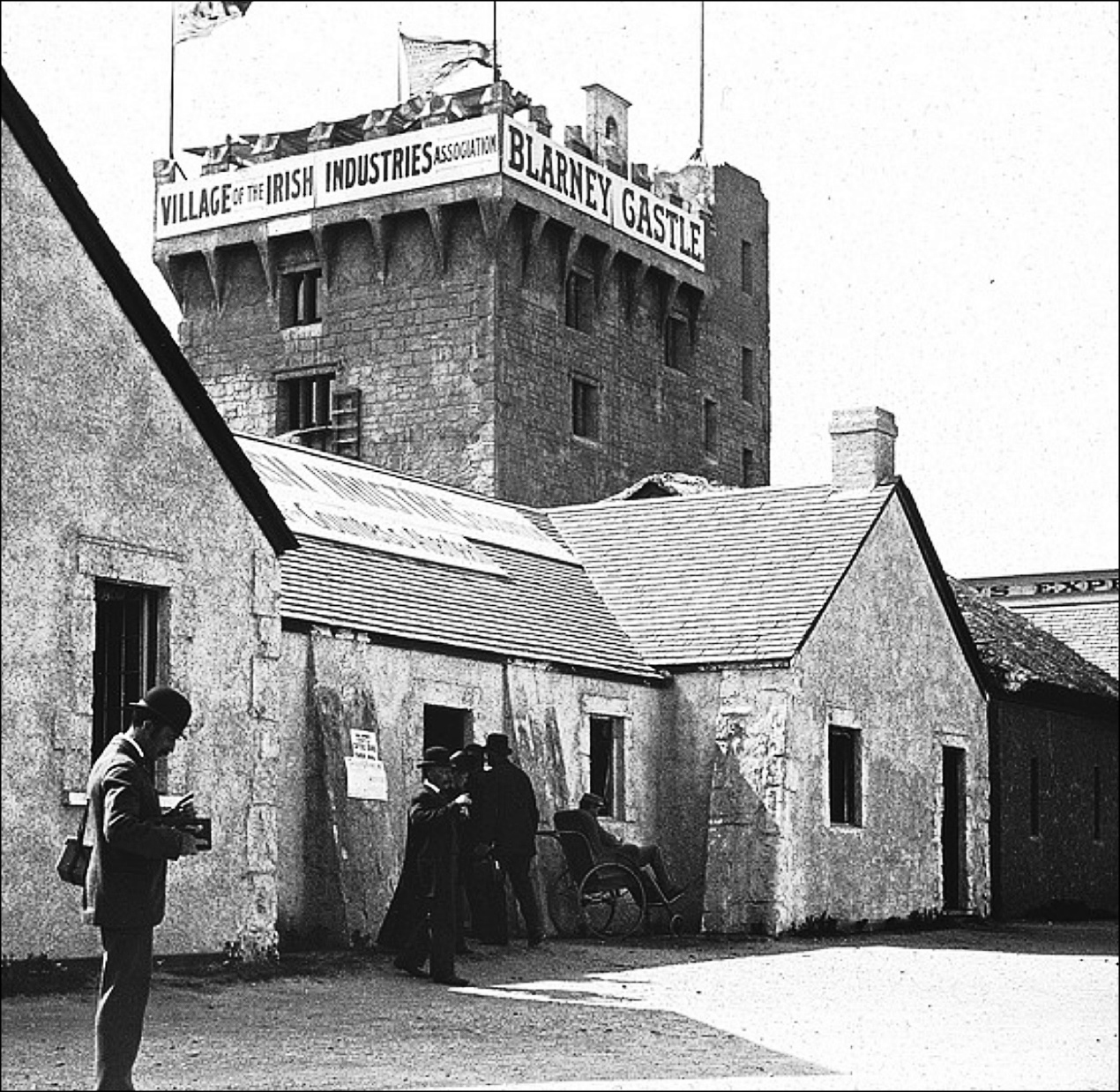 Blarney Castle in the Irish Village

The last village at this end of the Plaisance, and consequently just opposite the Diamond Match Company and the Beauty Show, is the Village of Irish Industries. This exhibit is under the presidency of the Countess of Aberdeen, wife of the Earl of Aberdeen, formerly viceroy of Ireland and recently appointed governor-general of Canada. While in Ireland, Lady Aberdeen founded the Irish Industries Association, the members and supporters of which society include the most prominent persons in Ireland of all classes, creeds and political opinions, and which has for its object the development and organization of cottage and home industries throughout Ireland, thus providing for the peasantry a permanent means of subsistence other than that of agriculture alone.

The Irish Industries Association has already been able to do much in making the work of the Irish poor known in Great Britain and in finding market for it. They now seek through this Irish Village at the World’s Fair to demonstrate the expertness of the workers, and to find a market for their goods on this side the Atlantic ; also to get together capital wherewith further to improve and develop these industries.

The gateway of the village on the Plaisance is modeled after the entrance to King Cormack’s chapel, Rock of Chasel, and is of itself enough to arouse the pride of the patriotic Irishman. Just beyond the entrance is a replica of the cloister from Muckross Abbey, exact in every detail. The visitor passes from the cloisters through a succession of cottages, in each of which a, home industry is exhibited in course of production ; such as the methods of making the different kinds of lace produced in different parts of Ireland, embroidery, hand-loom weaving, spinning, knitting, and a model dairy in which dairy maids of the Munster Dairy School show both old and new ways of making the best of butter.

A village concert hall, a museum, a village store and the public house are also prominent features, all clustering round the historic castle of Blarney. A piece of the genuine Blarney Stone from Ireland was brought here and built into the structure of this reproduction of the original castle, and here the adventurous or the romantically inclined may kiss it and obtain the gift of tongues which belongs to every true Irish man or woman. The two Irish villages of the Plaisance are rivals for popular favor, and the public is benefited thereby, for both strive constantly to secure the best of attractions for entertainment, and to each one is drawn a constant stream of visitors. 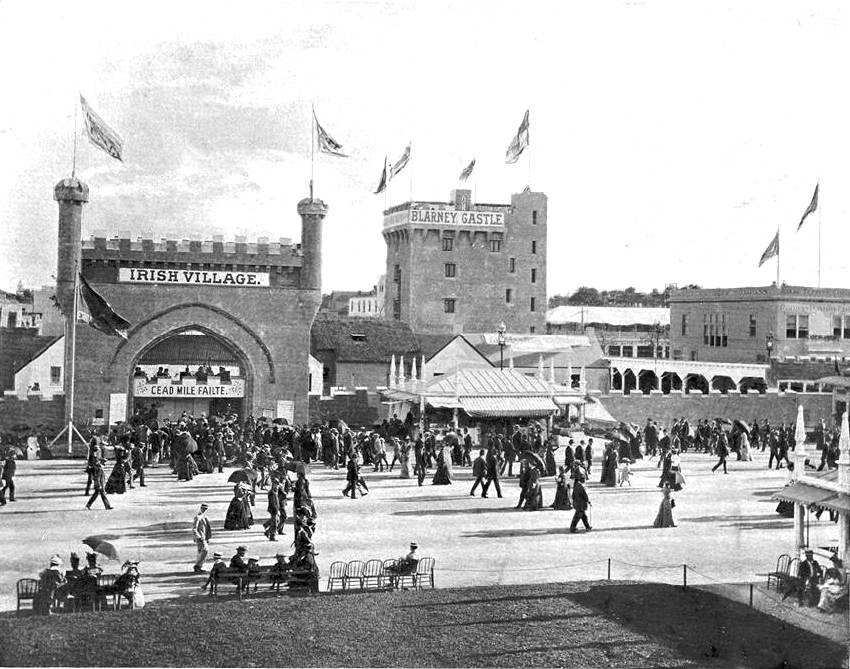 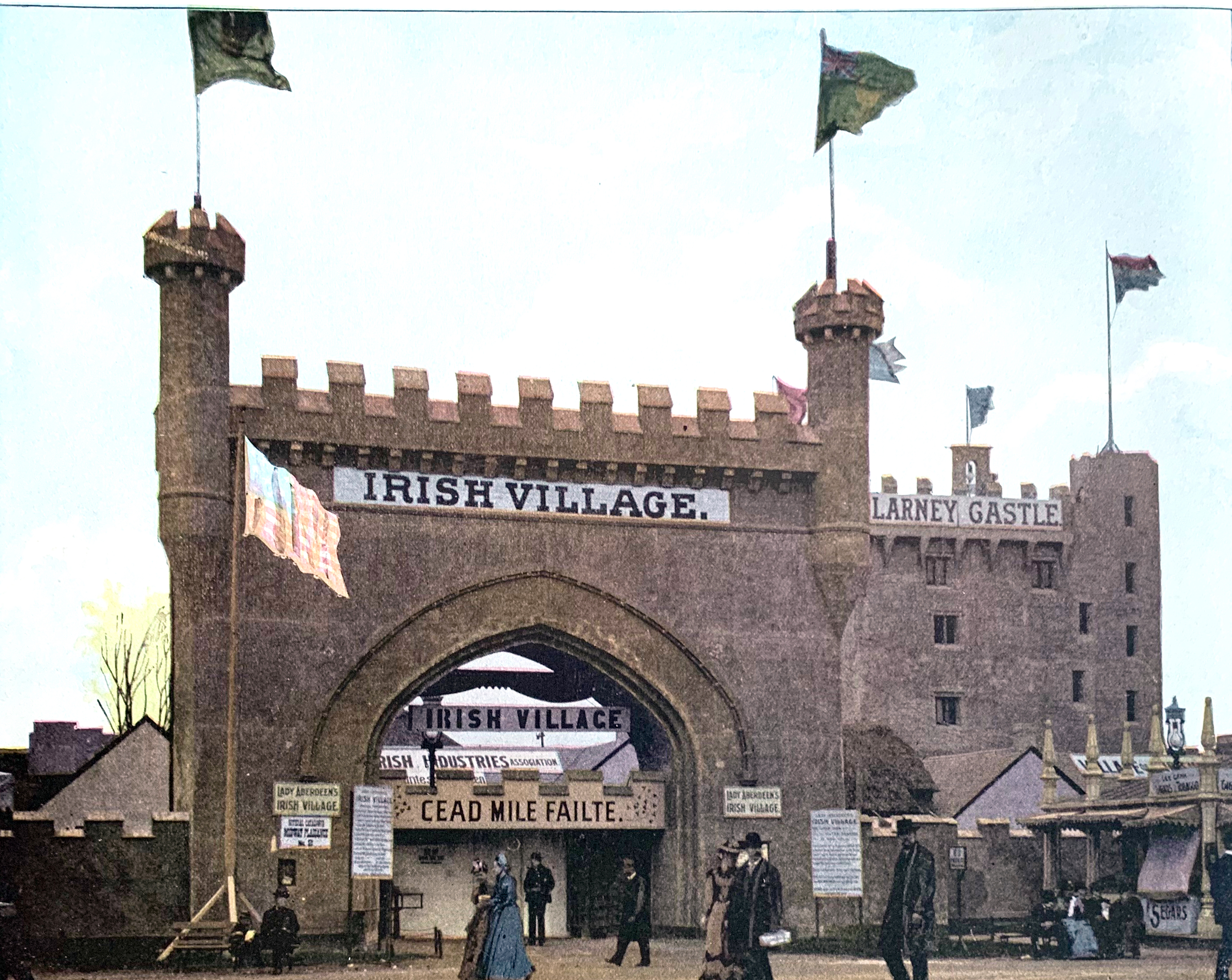 Adjacent to the cloister of Muckross is the cottage of Lady Aberdeen, named “Lyra-ne-Grena,” that is to say, the sunny nook, and over its door the inscription in Celtic, “Cead Mile Failte.” Its quaint, old-fashioned windows are shaded by the low, overhanging roof, with a frieze of shamrock in the interior, whose walls are frescoed and tinted in green. Much of the antique furniture of Irish oak or mahogany consists of historical relics. There is an old spinning wheel to the use of which her ladyship is no stranger, and in one of the corners is a writing desk that formerly belonged to Thomas Hood. Carpets and curtains represent Irish industries, and there are prints upon the walls of popular subjects, with portraits of famous men, as O’Connell, Swift, and Pope. 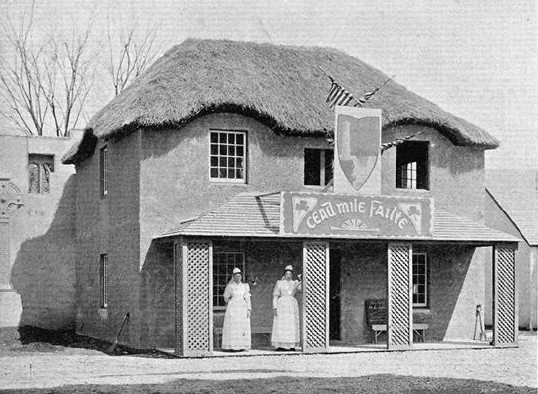 In a building known as the “Sheppa” there are more Irish industries. Then there is the music hall, with pipers and jig dancers, where also a young female harpist from the Dublin academy of music plays sweet accompaniments for singers of national airs. There is also Tara’s hall, in which are many relics, with duplicates of the ancient metal work fashioned by a Dublin jeweller. In this connection may be mentioned the harp of Brian Boroihme, bequeathed to the pope, and by the pope to Henry VIII, this precious heirloom passing, after further changes of ownership, into the museum of Trinity college, Dublin, where now is the home of the original. Finally there is the village museum, where are many objects of interest, with photographs of Irish antiquities, the latter a contribution from Lord Dunraven. 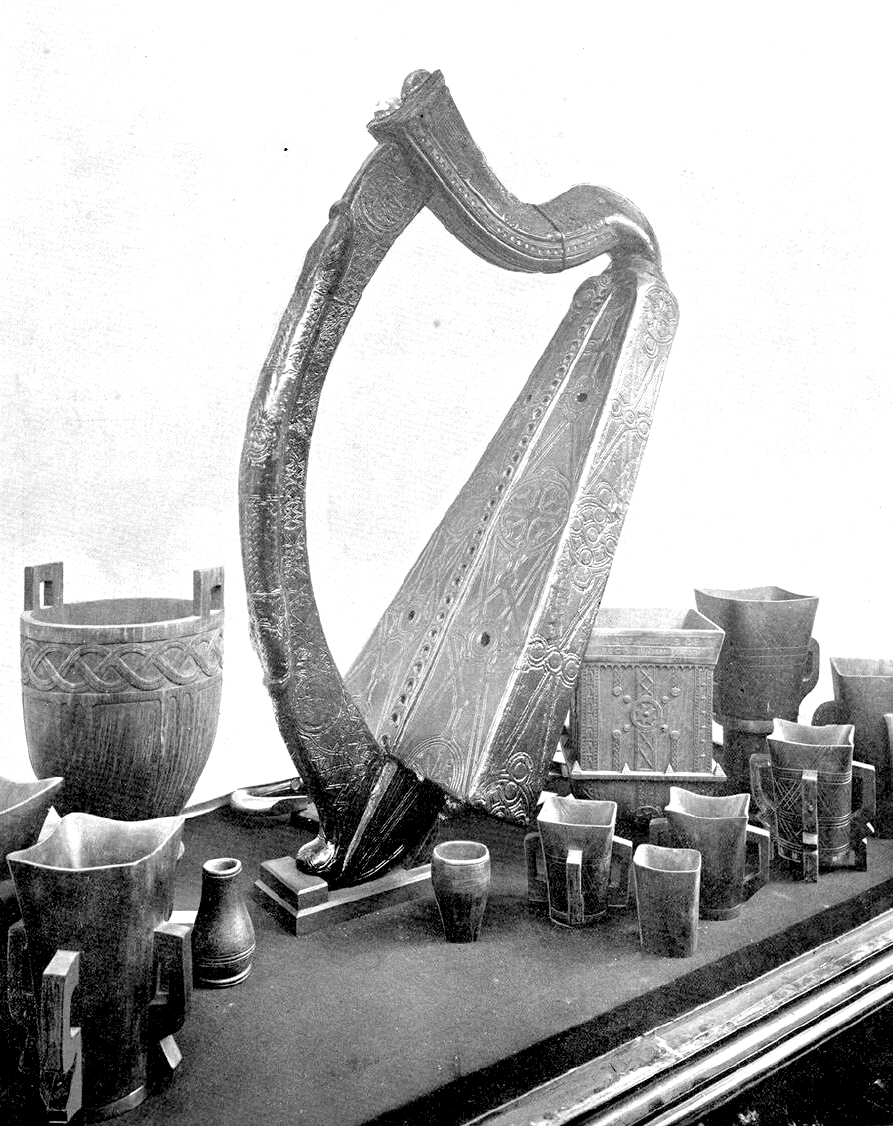