The Yerkes telescope, located in the Manufactures building, was not placed in position until several weeks after the opening of the Fair. It was not until late in December of 1892 that the contract for making this instrument was assumed by the Cleveland firm of Warner & Swasey, and it was thought that at least a year would be required for the task, the magnitude and delicacy of which it is impossible to over-estimate. The telescope was put together at the Fair, as indeed it must be; for apart from the question of transportation, to place the tube in position on its supporting columns would have required an unobstructed space equal to that of a six-story building with sixty feet of frontage. 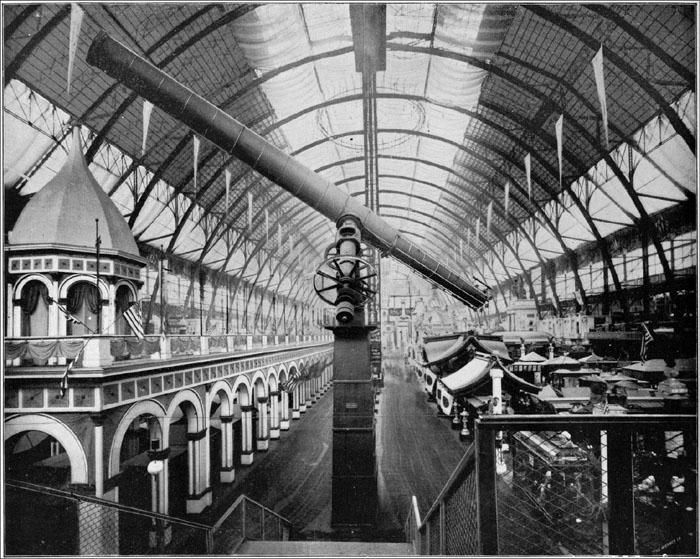 Except to the specialist, the display of surveying and engineering instruments, and of meteorological, optical, and astronomical apparatus is of no great interest; but in this connection is the most striking exhibit in all the department of Liberal Arts, in the form of an equatorial telescope, sixty-five feet in length, with a lens forty inches in diameter, and weighing, apart from its foundations, nearly seventy tons. In weight it is about fifty per cent and in power twenty-five percent greater than the Lick telescope at the Mount Hamilton observatory, the gift of a California millionaire to the cause of astronomical science, and with this exception the largest in the world. Yet so delicate is he workmanship and so perfectly balanced the parts, that the tube and declination axis to which it is attached, weighing together 16,000 pounds, can be moved by the pressure of a forefinger. Built by the artificers of the Lick instrument for a wealthy and public-spirited citizen of Chicago, the Yerkes telescope, located near the northern end of Columbia Avenue, will find a permanent home in the Geneva observatory in connection with the University of Chicago. 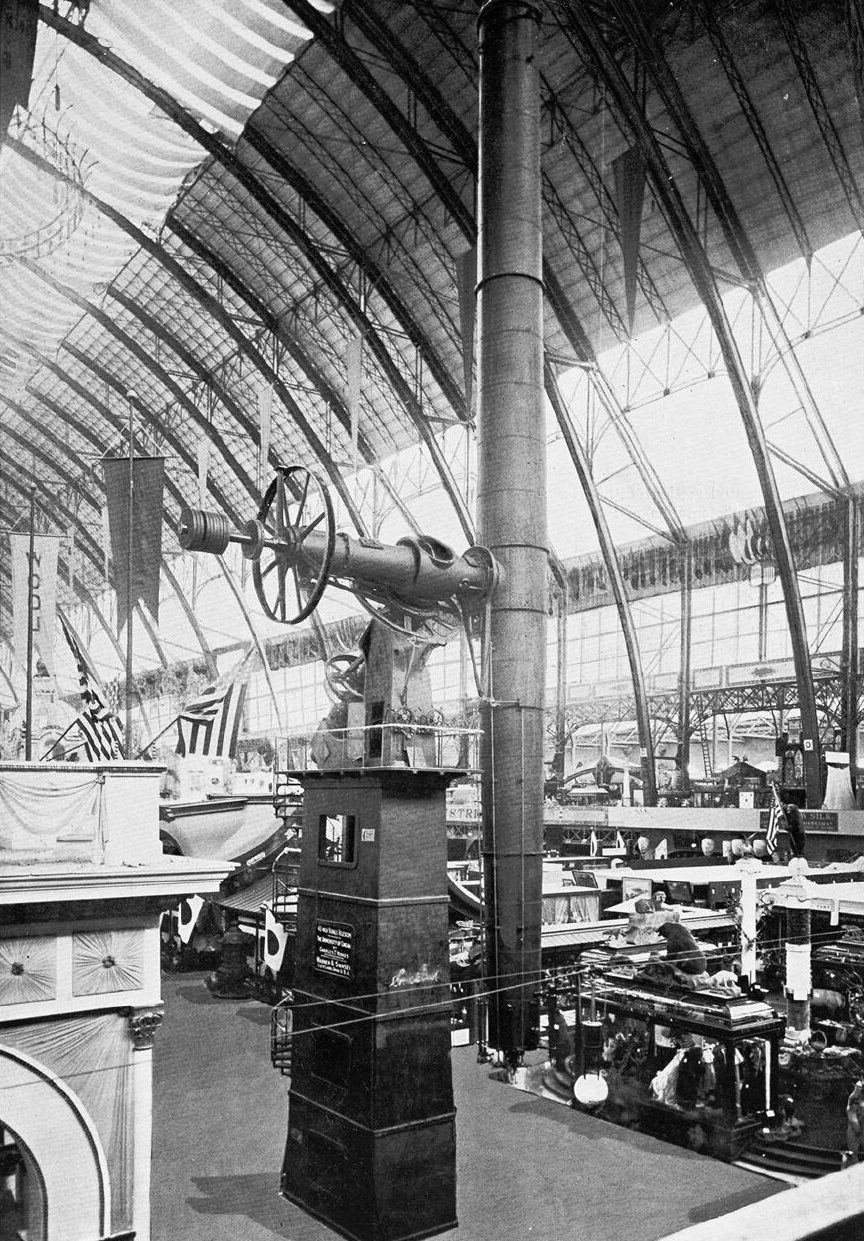 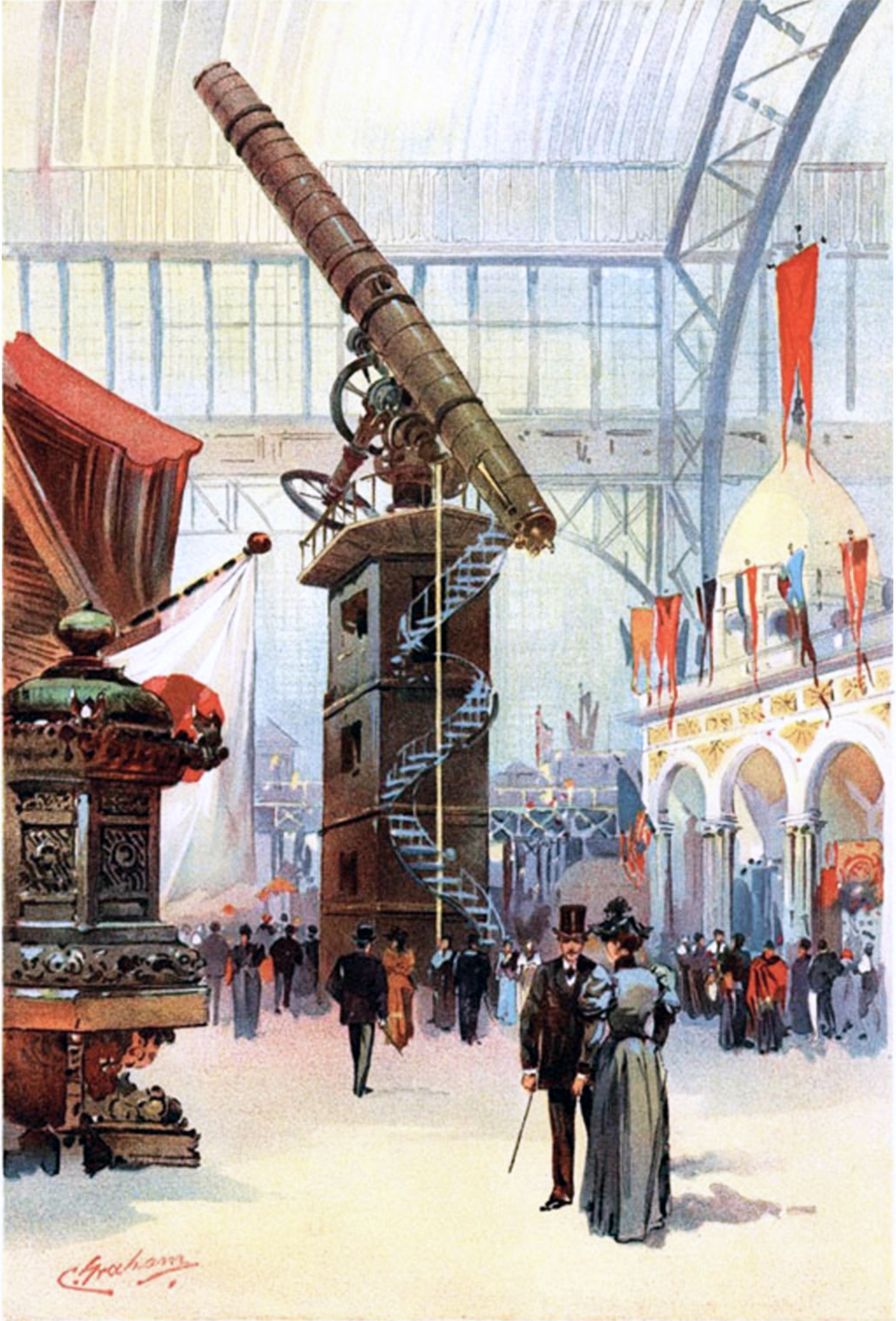 Chicago has the singular distinction of having twice possessed an astronomical instrument admitted to be the biggest refractor and justly entitled to be called the best telescope of any class in the world. The “equatorial” of eighteen and a half inches aperture and twenty-three feet focal length which was mounted in the Dearborn Observatory in this city in March, 1866, “led all the rest” from that time till 1873, when two larger instruments by the same maker were finished for the National Observatory in Washington and for the University of Virginia respectively. Now the lost lead is retaken by the building of the Yerkes Observatory of the University of Chicago, near the northern extremity of Lake Geneva, in Wisconsin. The structure is equipped in part with a monster glass having a clear aperture of forty inches, mounted in a steel tube sixty-two feet long. The diameter of the opening