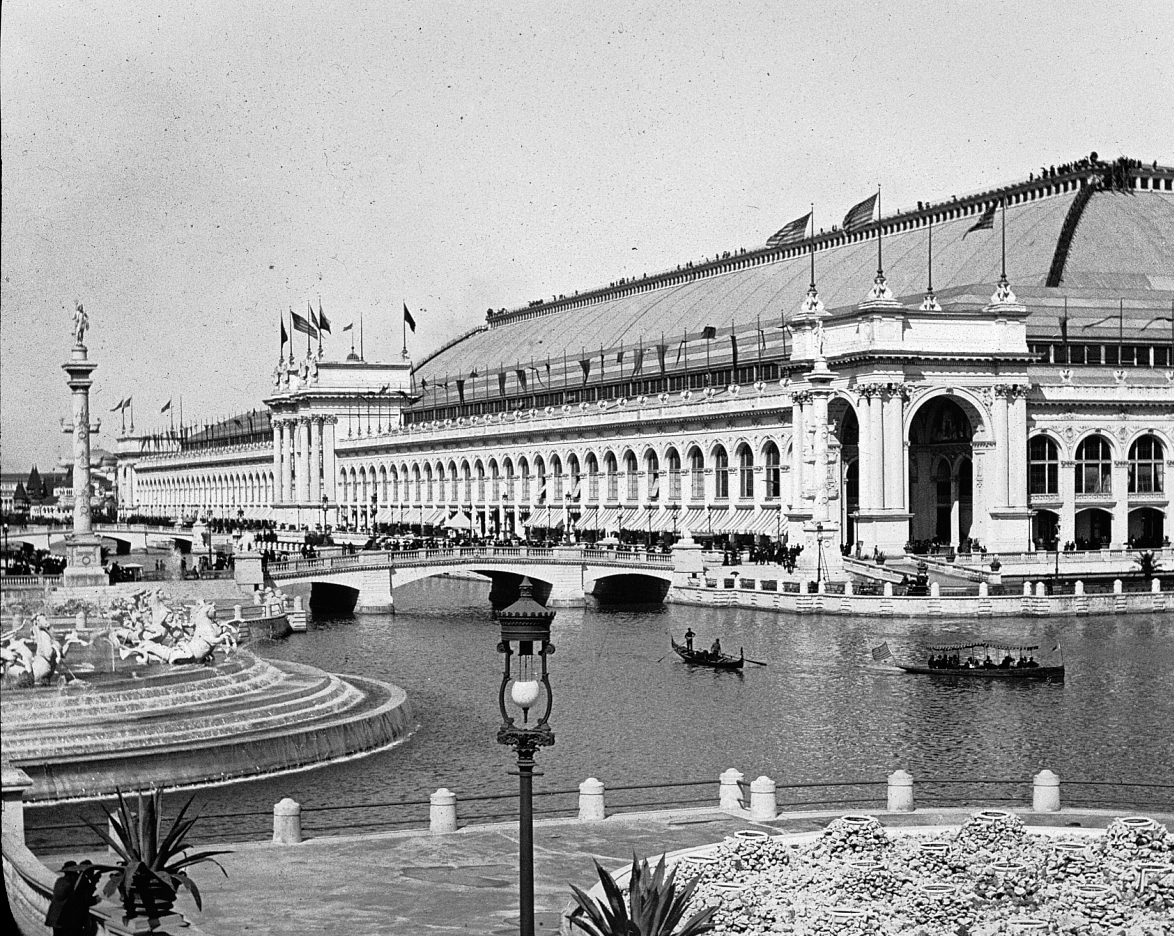 Without underrating the vast treasures of human industry and art that are collected at Jackson Park, the buildings themselves are the greatest attraction. For vast extent, boldness of conception, wonderful engineering, faultless proportions, and impressive grandeur the Manufactures building is easily the greatest of them all, and the greatest building on earth. This building covers an area of 1,687 x 757 feet, and is, in its main portions, over 200 feet high. It is more than a third of a mile long, and nearly a sixth of a mile wide, and covers over thirty acres of ground. In the center of this space is a court 1,237 x 387 feet in size, the roof of which is supported on gigantic steel trusses, which span the entire width, and are 210 feet high, or fifty feet higher than those of the Machinery Hall at Paris, forming the largest unincumbered court ever constructed. Around this court runs a nave, 107 feet wide, with a gable roof 114 feet high; and around the nave runs a lean-to fort3′-flve feet wide, covering an uninclosed ambulatory. Tho building is in the Corinthian style of architecture,and in point of being severely classic excels nearly all the other edifices. The long array of columns and arches, which its facades present, is relieved from monotony by very elaborate ornamentation. In this ornamentation female figures, symbolical of the various arts and sciences, play a conspicuous and very attractive part The exterior of the building is covered with “staff,” which is treated to represent marble.

The huge fluted columns and the immense arches are apparently of this beautiful material. There were four great entrances, one in the center of each facade. These are designed in the manner of triumphal arches, the central archway of each being 10 feet wide and 80 feet high. Surmounting these portals is the great attic story ornamented with sculptured eagles 18 feet high, and on each side above the side arches are great panels with inscriptions, and the spandrils filled with sculptured figures in basrelief.

At each corner of the main building are pavilions formed in great arched entrances, which are designed in harmony with the great portals. The building occupies a most conspicuous place in the grounds. It faces the lake, with only lawns and promenades between. North of it is the United States Government building, south the harbor and in-jutting lagoon, and west the Electrical Building and the lagoon separating it from the great island, which in part is wooded and in part resplendent with acres of bright flowers of varied hues.

It was agreed that the city of Chicago would have until May 1,1894, to decide on the purchase of the Manufactures building for removal to the lake front. 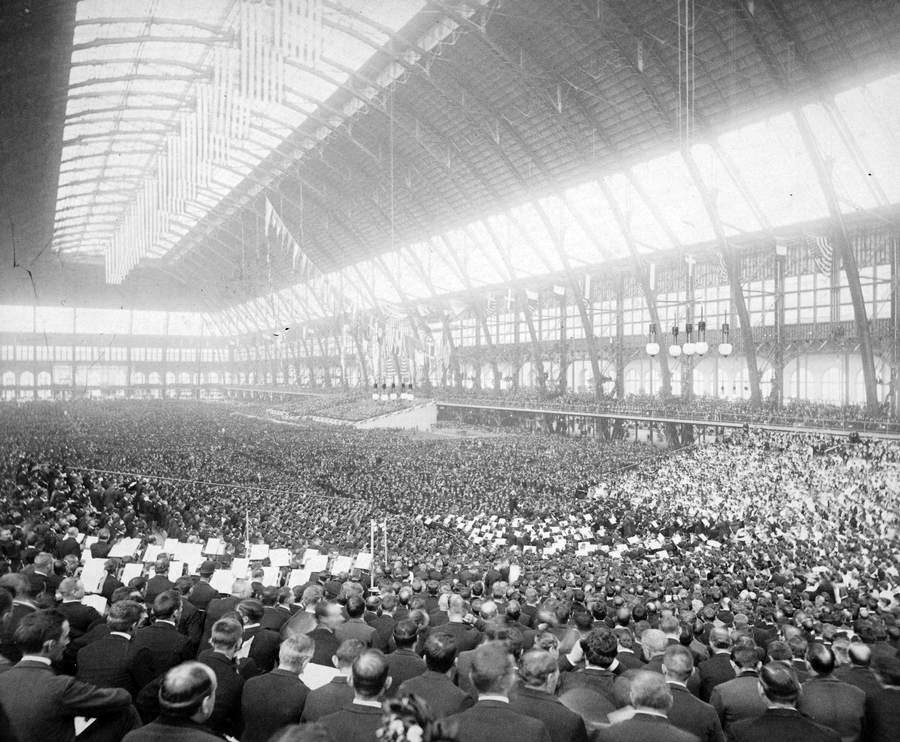 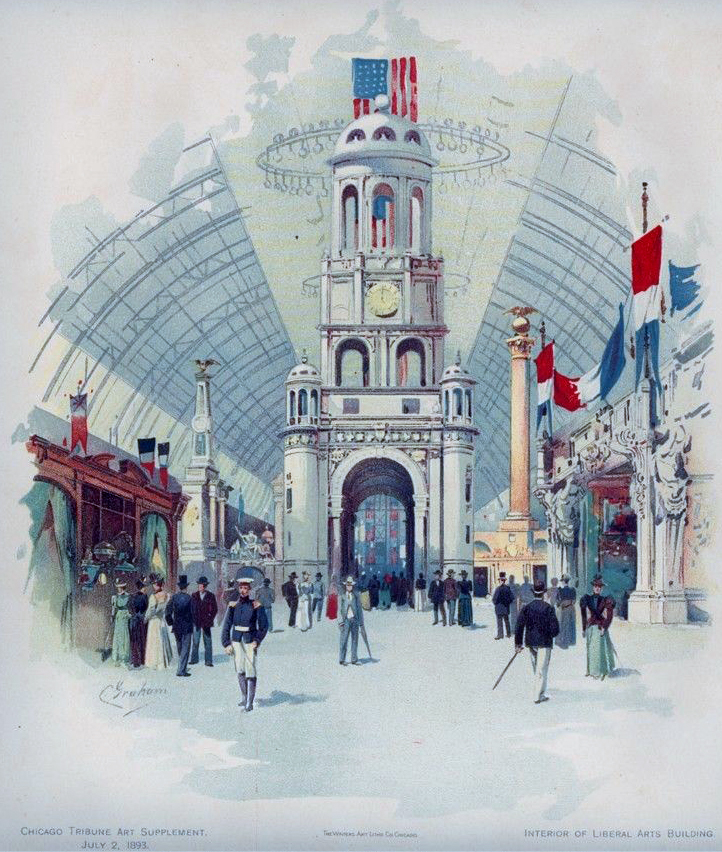 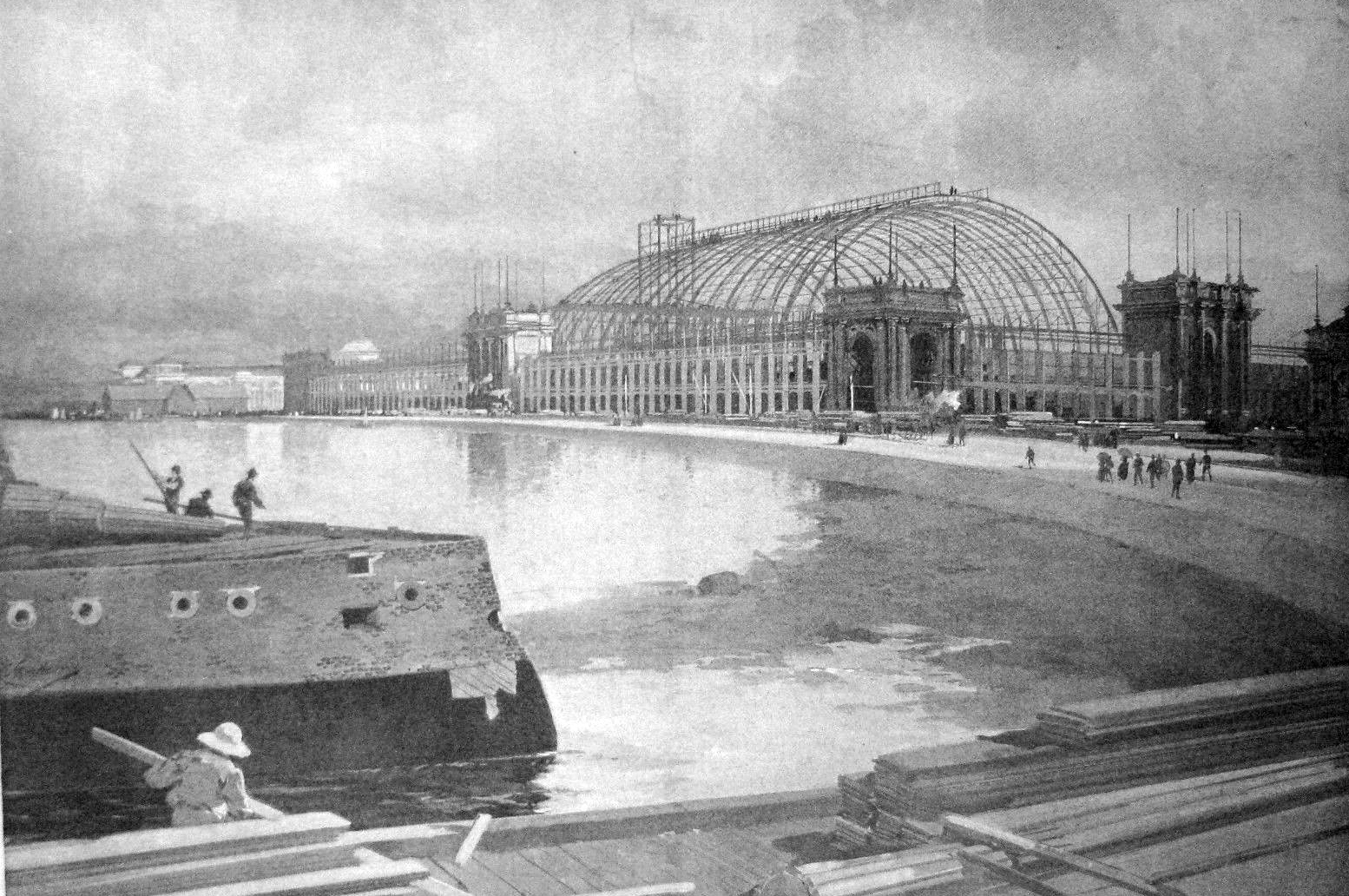 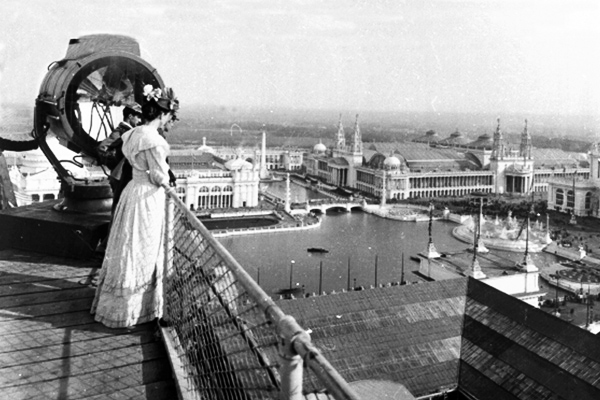 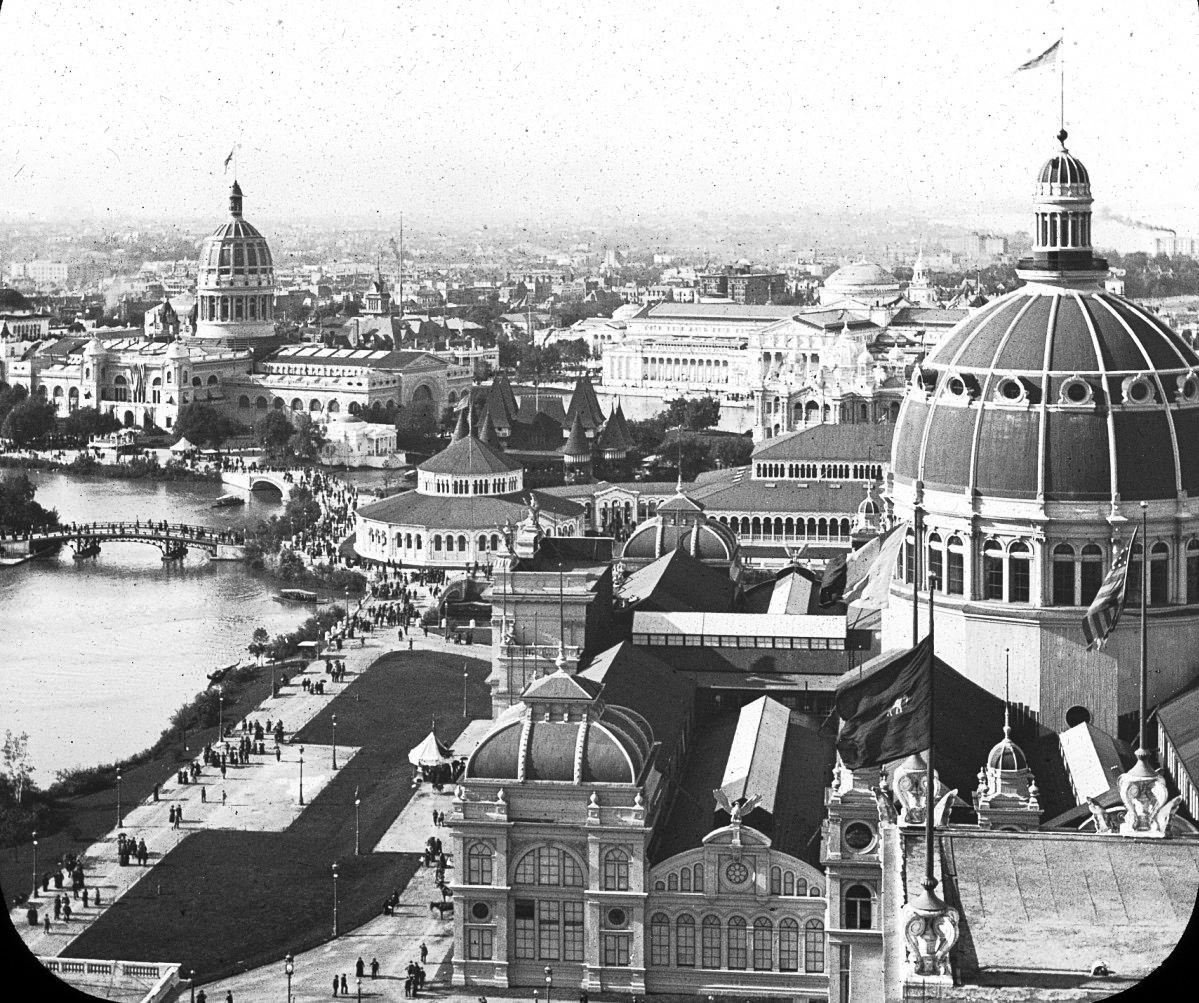 View from the Manufacturing Building 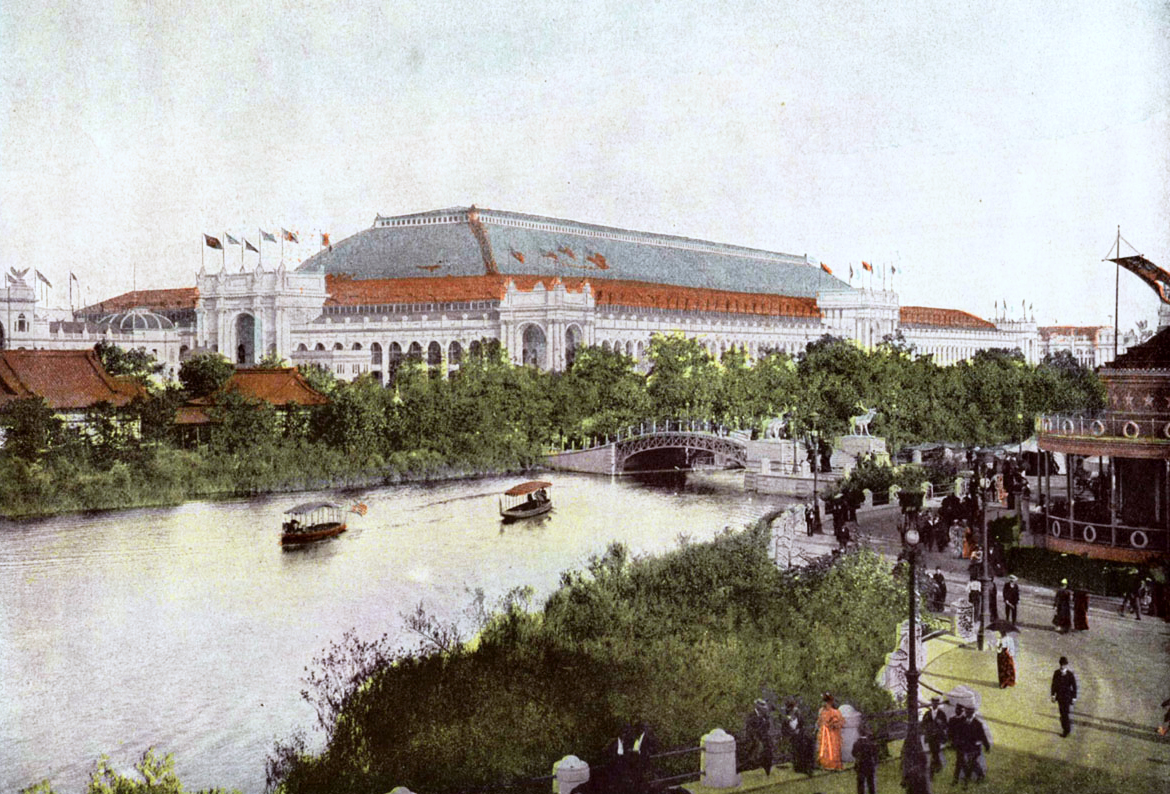 THE MANUFACTURES AND LIBERAL ARTS BUILDING.—Ranking in popular estimation as one of the greatest wonders of the Fair, the Manufactures Building compelled the astonishment and admiration of the artists and architects of the world as well. The largest building in area ever erected under one roof it has yet been recognized as a triumph artistically not less than as a marvel of daring in construction. In describing the mammoth structure, which rises in the illustration above and beyond the Wooded Island, figures become almost poetry, so striking are they in character. The building covers an area of nearly thirty-two acres, and the interior, with the galleries, had an exhibiting space of nearly forty-four acres The height of the roof truss over the central line was two hundred and twelve feet nine inches, and its span three hundred and fifty-four feet in the clear. The building was four times as large as the old Roman Colosseum, which seated eighty thousand people, and its great central hall, a single room without a supporting pillar, could seat three hundred thousand persons. The height of the exterior walls was sixty-six feet and the grand entrances in each facade are eighty feet in height by forty in width. The structure was of the Corinthian order of architecture, was rectangular in form, and the classic severity of its style was relieved by the corner pavilions and elaborate and appropriate ornamentation. Its cost was $1,700,000 and 17,000,000 feet of lumber, 12,000,000 pounds of steel and 2,000,000 pounds of iron were used in its construction. 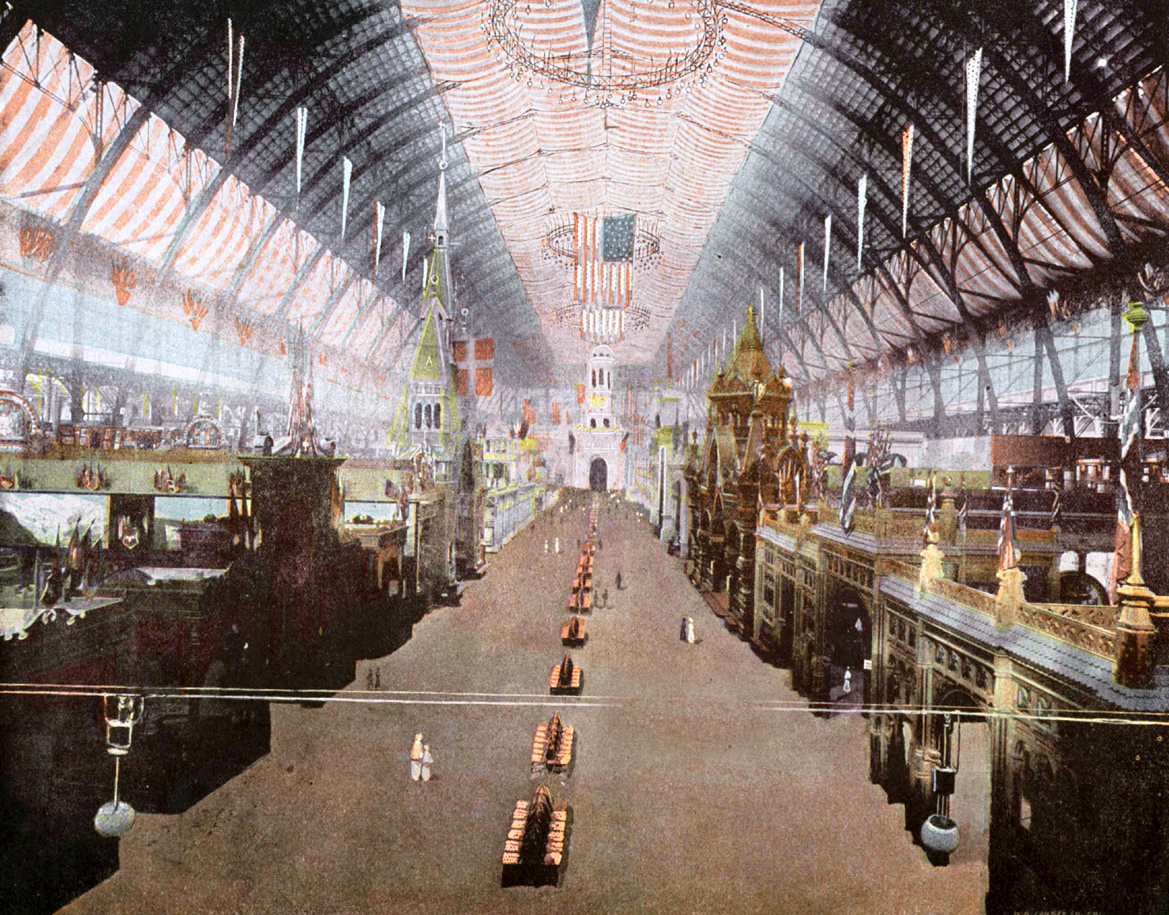 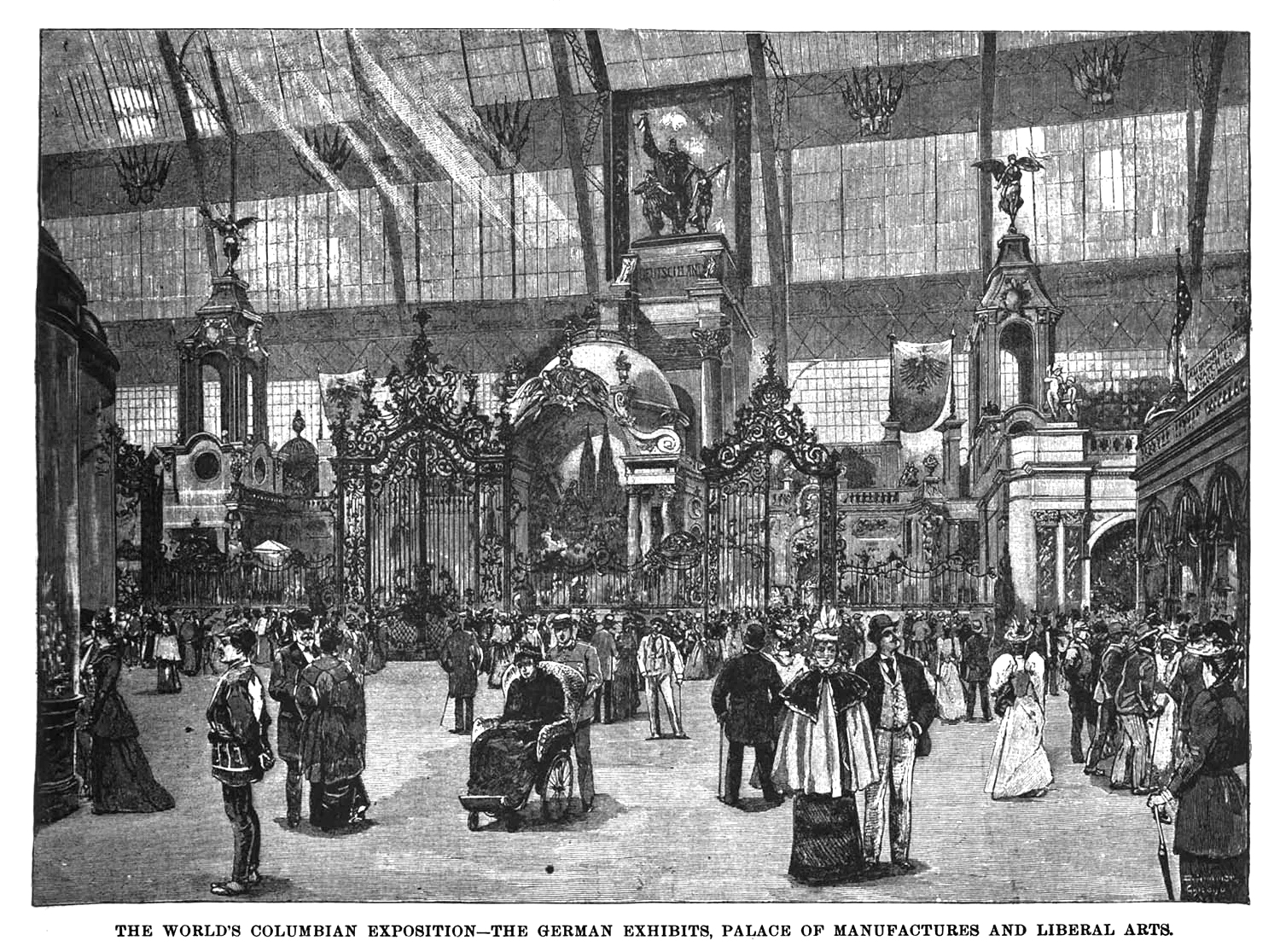 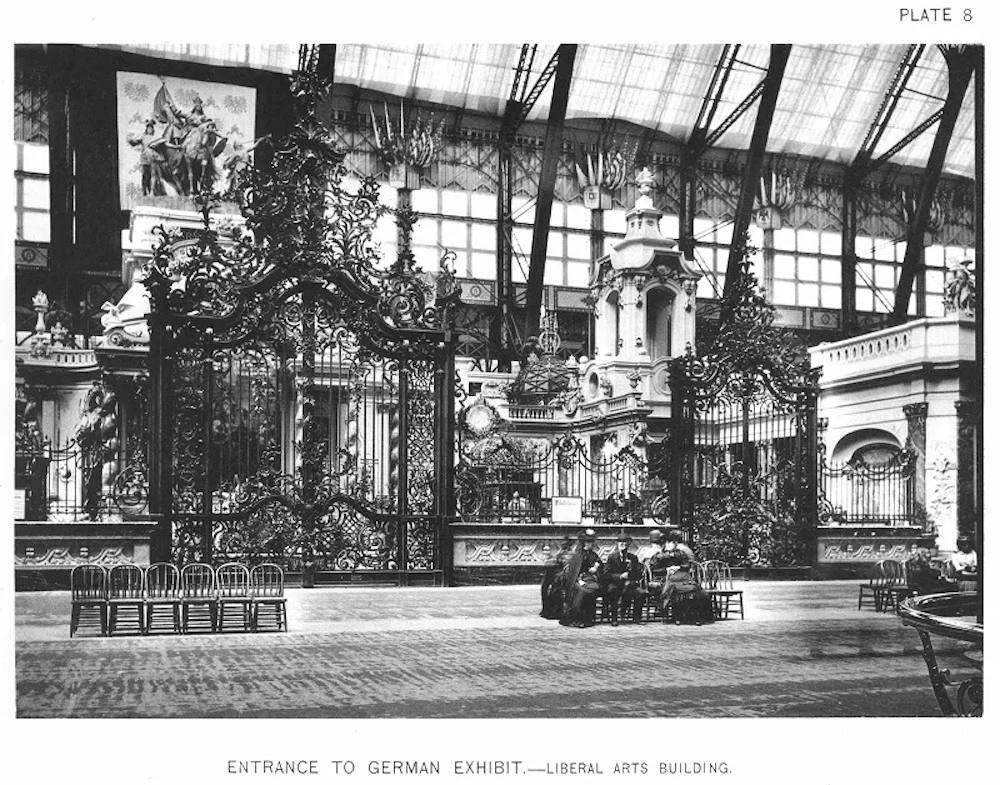 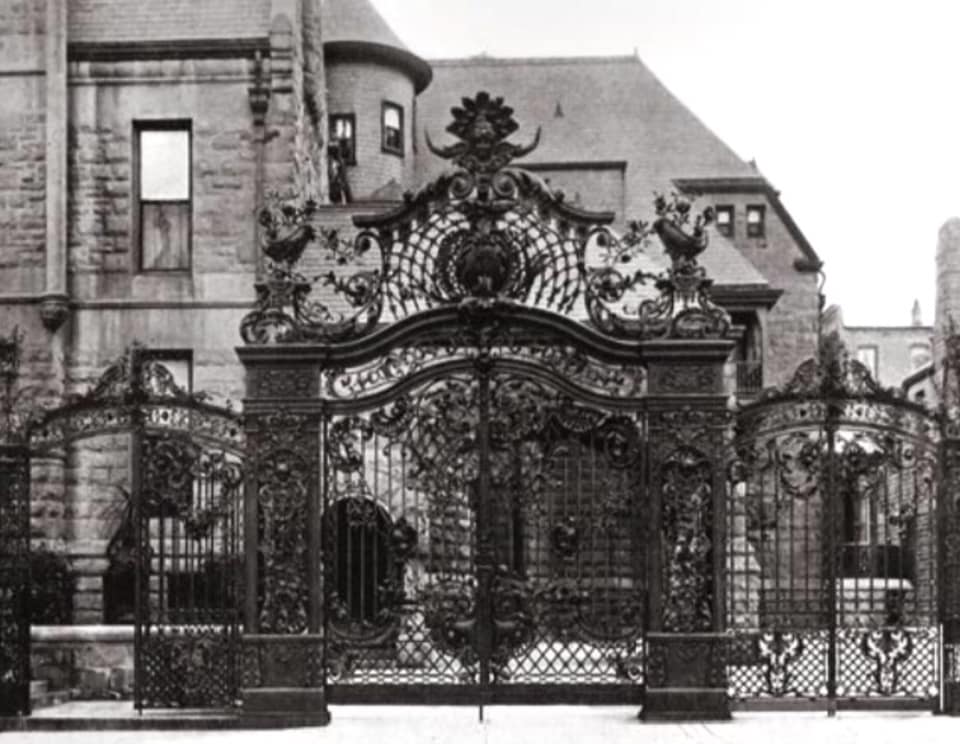 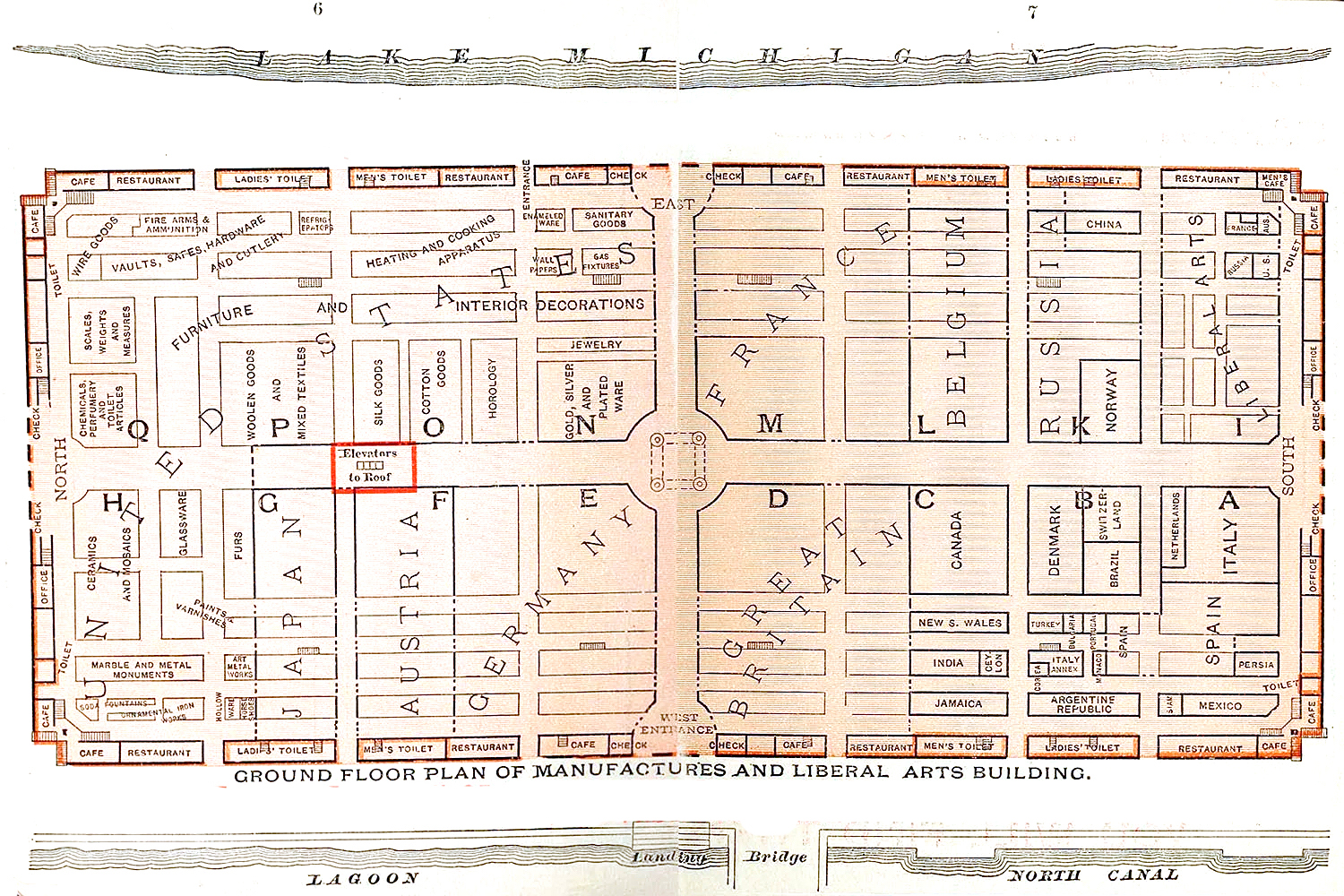 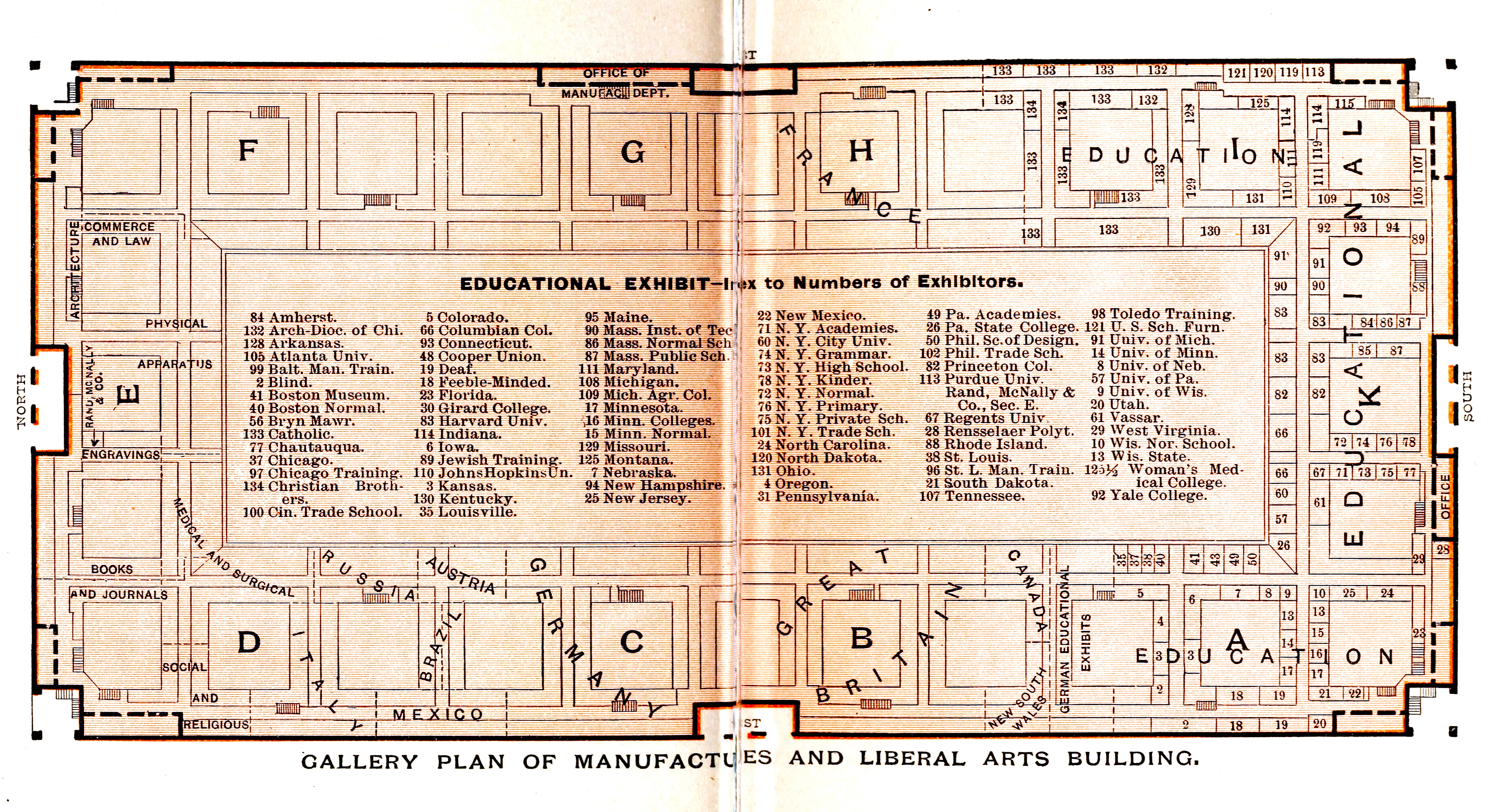