In the days before motion pictures, cycloramas (each a giant mural running along the interior wall of a cylindrical room) were a popular form of entertainment. The Fire Cyclorama measured nearly 50 feet high by about 400 feet long and occupied its own building on Michigan Avenue, between Madison and Monroe Streets. In thrilling fashion, the enormous tableau depicted the events of October 8 to 10, 1871.

It was produced by The Simeon W. King Panorama Company. About 144,000 people attended the Cyclorama annually. After the exhibit closed, the canvas was stored on a warehouse on South Indiana Avenue then was sold to a junk dealer for $2.00 in 1913.

PRONOUNCED IT AN ARTISTIC SUCCESS.
The Opening Reception of the Cyclorama of the Chicago Fire.
The opening reception of the Cyclorama of the Chicago Fire was given yesterday afternoon on the central platform in the Cyclorama Building, No. 130 Michigan avenue. After an address of welcome and some explanation of the manner in which the great painting was made, and what it comprised, by Howard Goss, the President of the Cyclorama company, Prof. David Swing made a few remarks commending the naturalness and truthfulness with the some scene is depicted, and giving an account of some amusing incidents in his own experience at the time of the great conflagration. Mrs. Alice Demeres Bennis sang two selections and responded to an encore. One of them was George F. Root’s ballad, “As Ye Have Done It Unti Me,” which relates the story of the fire and the assistance rendered to Chicago by other cities. Mrs. Anna D. Spence recited Will Carleton’s poem, “The Burning of Chicago.” Bishop Fallows then followed with a short address, relating his experiences during and after the fire and congratulating the city upon having the most remarkable event in its history so admirably commemorated. Among the 500 or more guests present were many of the oldest and best known citizens of Chicago, most of whom witnessed the fire. These commended the accuracy with which landmarks, once familiar to them, are portrayed, and all were able to pronounce it an artistic success.

The Court-House Burned.
When the Court-House burned in the great fire of ’71, the scene was grand and awe-inspiring. You must see it again with fearful reality at the Chicago Fore Cyclorama on Michigan avenue. 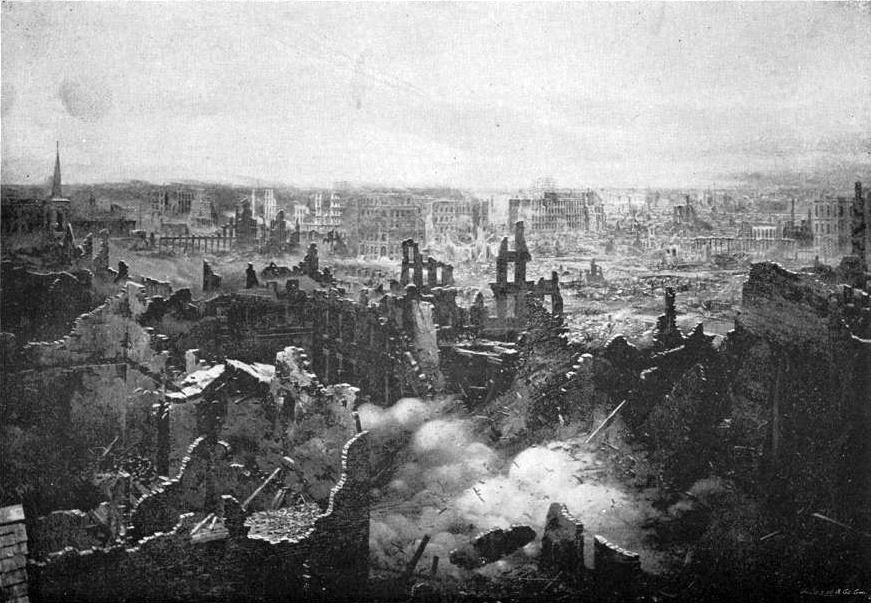 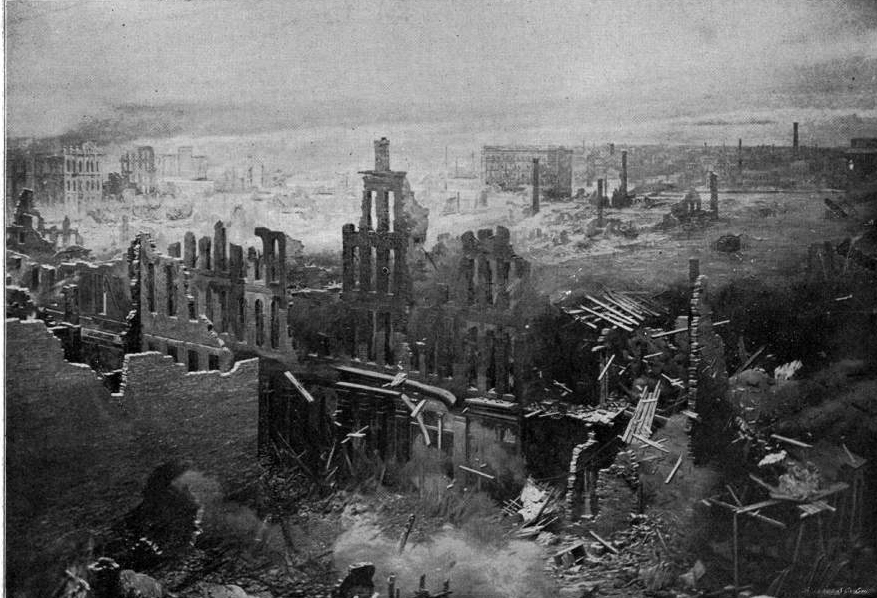 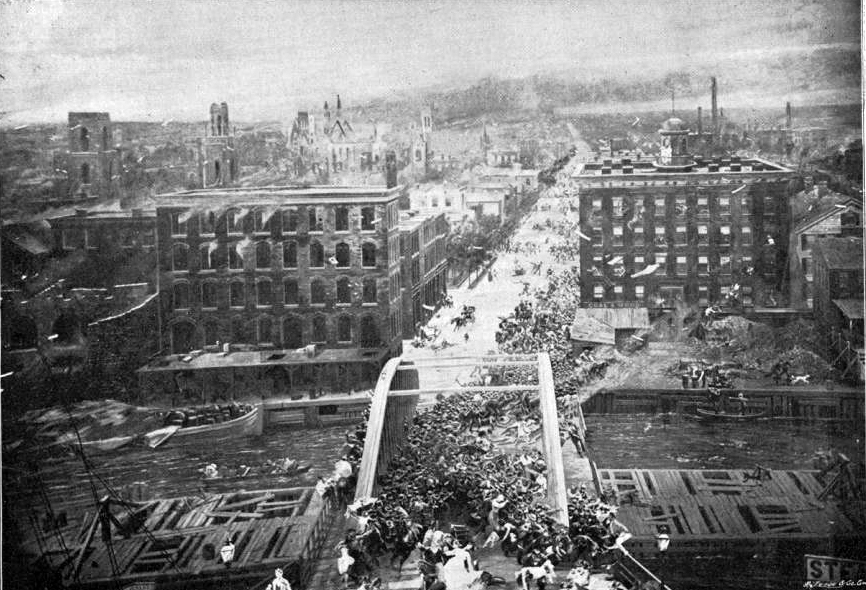 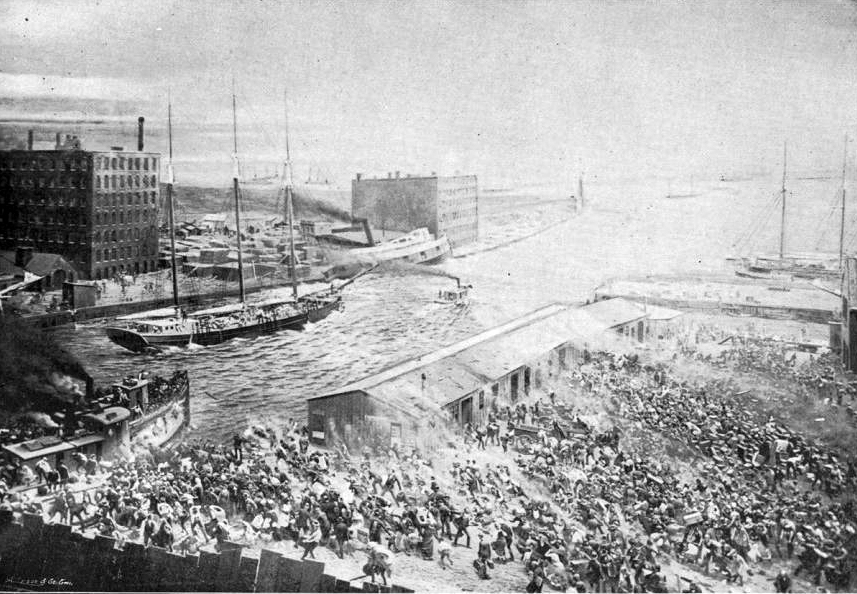 Chicago Fire Cyclorama
Scene The Fourth
Escaping to the River 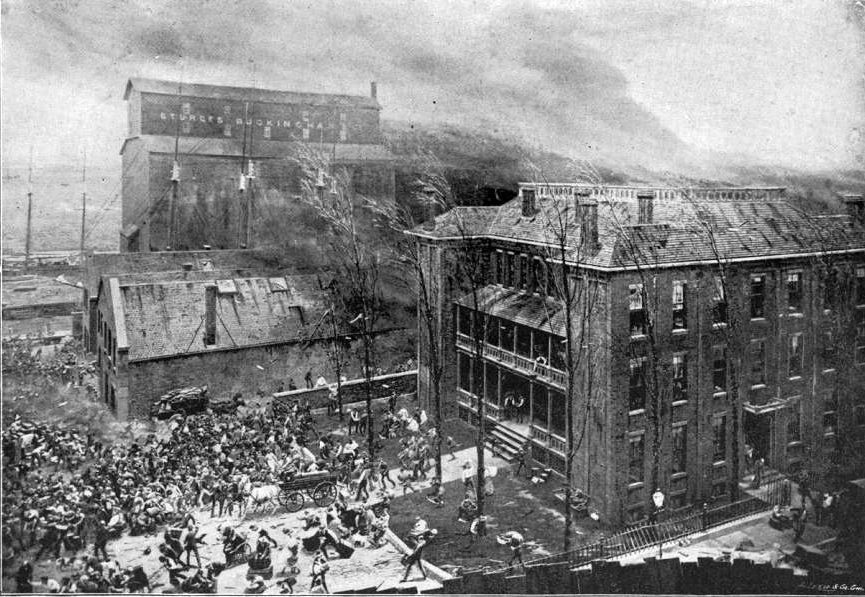 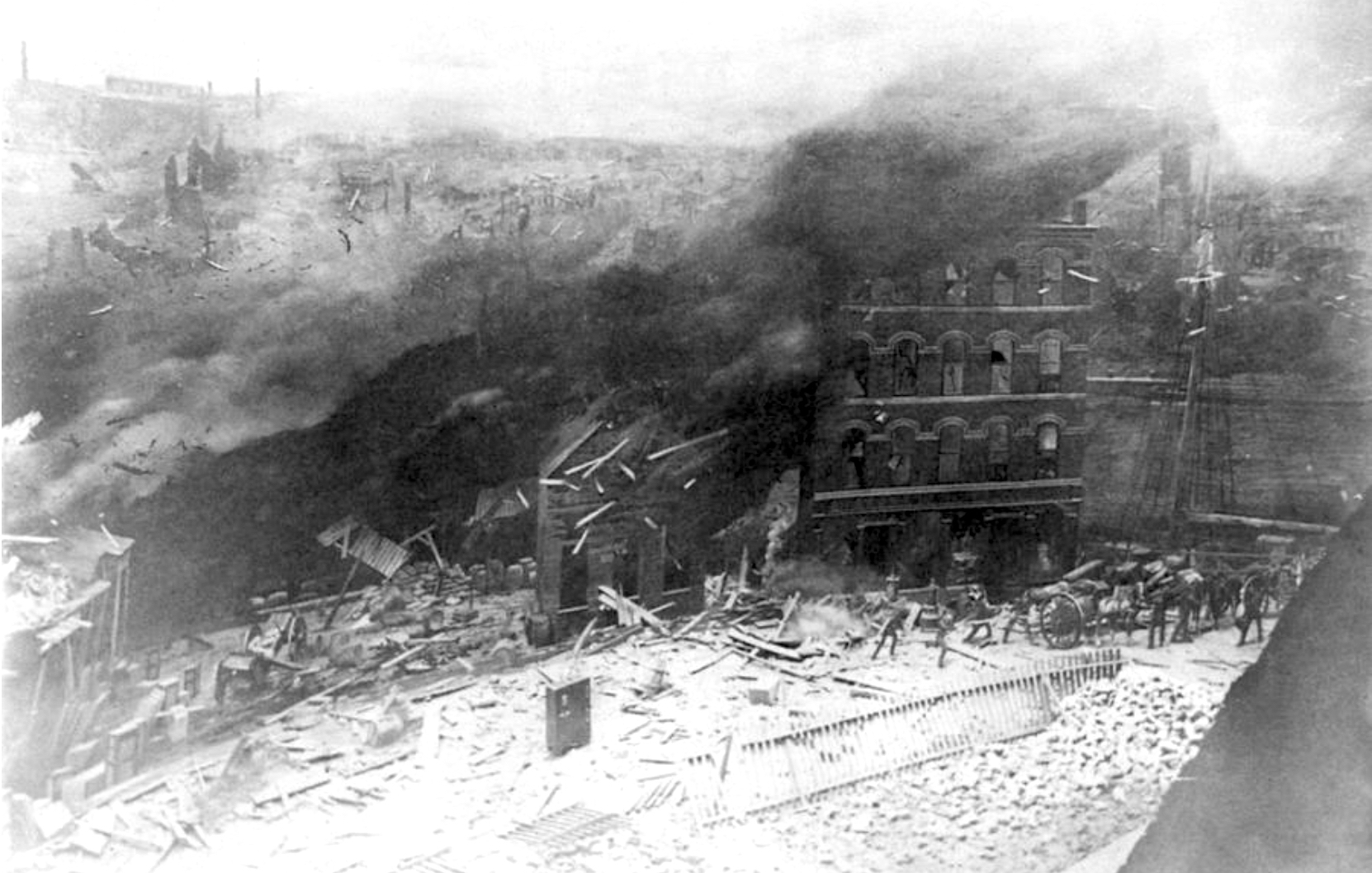 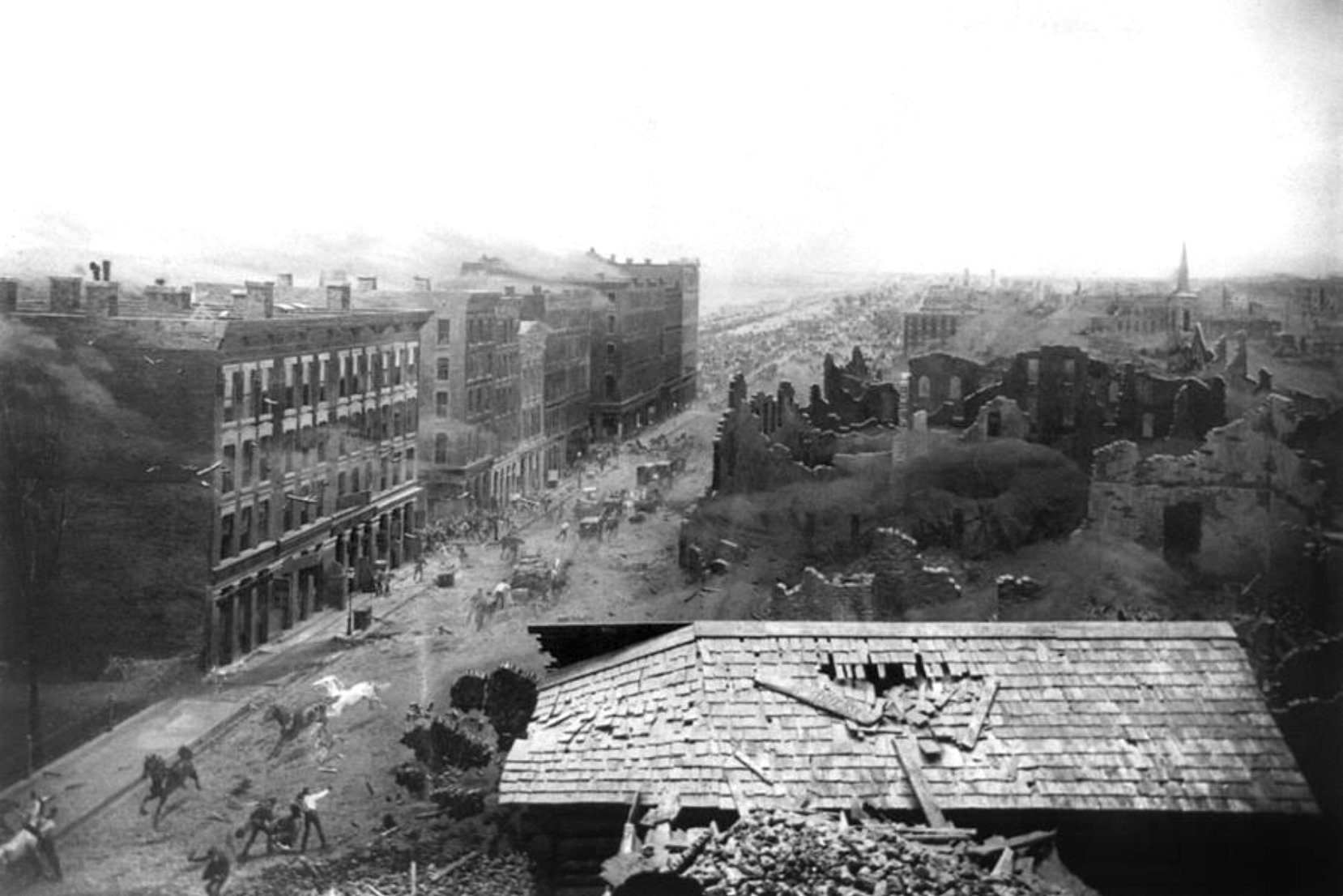 Three Thousand Dollar Wagon.
The most beautiful and costly advertising wagon ever built is probably the one just put on the streets by the great Chicago Fire Cyclorama. The artists have placed upon big side panels a small section of the cyclorama that so wonderfully shows the great Chicago fire. Wherever the wagon stops crowds surround it. The Racine Carriage and Wagon Company built the vehicle and it is valued at $3,000.

The great cyclorama of the Chicago fire is to be removed within a few days from its position on Michigan avenue, near Madison street. Some propositions have been made for taking it to other cities, but many people think it highly desirable it should remain here. The painting is wonderfully realistic, calling up vividly the recollection of scenes in that fearful night twenty-two years ago when the most important part of Chicago was destroyed by fire, and nowhere else will it be appreciated so much as in this city. It has been visited by more than 100,000 people, and at least half a million more would have gazed upon its portrayal of the fire horror had they been aware how faithfully the scene is reproduced on its glowing canvas. 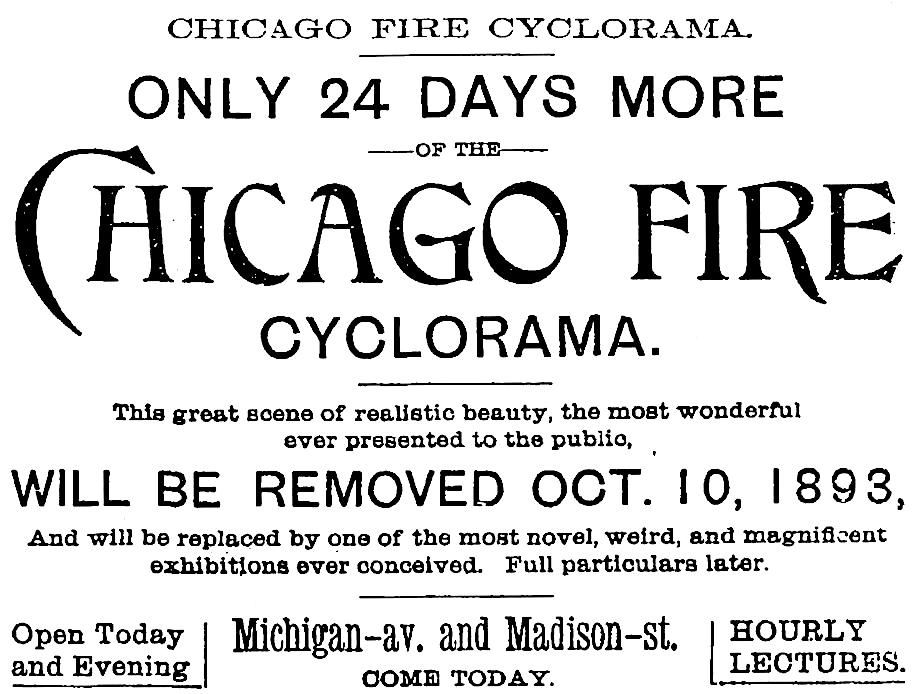 The question is not as to the desirability of keeping it here, but how to accomplish that and what to do with it. The suggestion is made that it should go to one of the public parks, where it can be exhibited to the great mass of the people and at the minimum of possible cost to them individually. It is believed the value of the painting would grow in the popular estimation as the years rolled by, and it is stated to have been prepared in such durable colors that it will last indefinitely without fading. But to buy the great picture and put up a suitable building properly furnished, heated, and lighted would cost cost, it is stated, perhaps $140,000. and it is a question if the Park Commissioners have the right to expend such an amount for that purpose, however laudable it might be.

The point, however, could be covered in a manner similar to that by which the Academy of Sciences was secured for Lincoln Park. The Commissioners of either of the parks have the right to furnish the ground, and probably little difficulty need be experienced in raising the money if the subject were properly agitated. Wealthy citizens might be found willing to subscribe for the sake of the good it would do their section of the city, and the matter of transportation might prove a powerful inducement. If the increased travel over the street railways of the North Division has paid Mr. Yerkes for his handsome donation of an electric fountain to Lincoln Park it might be deemed an equally good investment for a street car magnate to pay for the housing of the fire cyclorama in one of the parks. Whether or no, there is no harm in canvassing the possibilities of the situation or in reminding the public that if anything be done in this direction it must be done quickly. Otherwise this vivid reminder of our great calamity will go elsewhere. 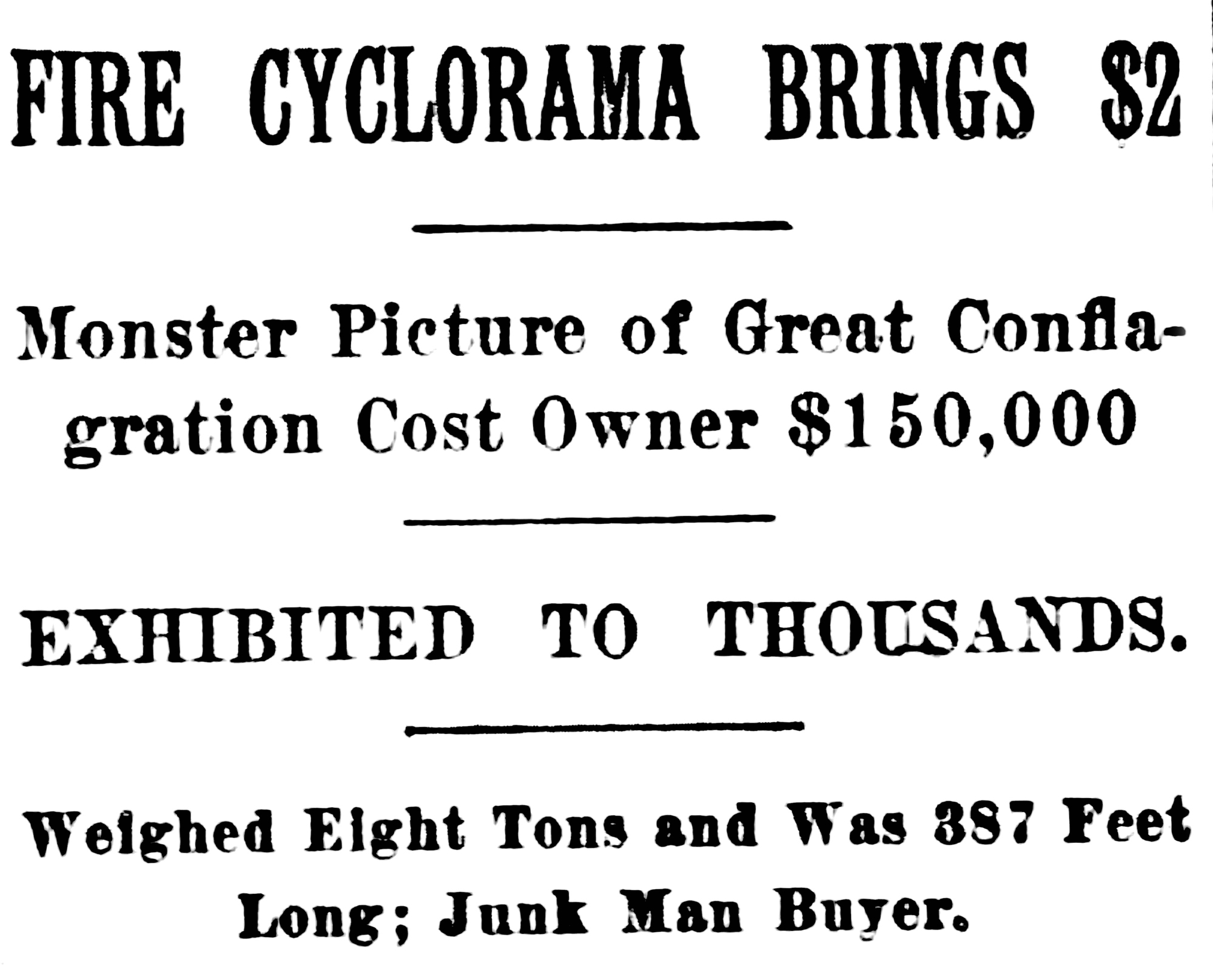 The old cyclorama of the Chicago fire, viewed by thousands of visitors to the world’s fair in 1893 and which cost $150,000 to paint and set-up, was yesterday sold to a junk dealer for $2. The canvas, which weighed eight tons, has lain for many years in a box on a lot at 6001 Indiana avenue.

H. H. Gross, a former member of the board of education, was the owner and producer of the picture. It was first shown in the spring of 1893 in a round building which stood on the present site of the Chicago Athletic association clubhouse. It was on exhibition about one year.

Eight artists spent one year in painting it. Its dimensions were forty-seven feet high and 378 feet long. Among the artists who came to Chicago and worked on the picture were Mege, Corwin, Wilhelmi, Austin, Grover, Collins, and Peyraud, About it $15,000 worth of silhouettes used in the building during the exhibition of the painting were destroyed.

An oil painting study created by the same team that produced the actual Cyclorama was preserved as it was recently discovered sitting, uncatalogued, in the Chicago History Museum archives. The painting, measured four feet high by forty feet long and contained scenes such as Panic at the Rush Street Bridge, Escaping to the River and Burning of the Old United States Marine Hospital. The study was made to 1/10 scale.