Cincinnatti, agreeably to her generous antecedents, on the occasion of the great calamity, sounded the depths of her benevolent impulses and munificently poured forth her charities to alleviate the distresses of the suffering citizens of Chicago.

Her city council was immediately convened by order of Mayor Davis, and with noble generosity voted to appropriate $100,000. The Chamber of Commerce held a special meeting, as did the Board of Trade, to institute measures of relief, at which the members subscribed generously, which, together with the donations
of citizens in their private capacity, reached the splendid sum of $125,000. 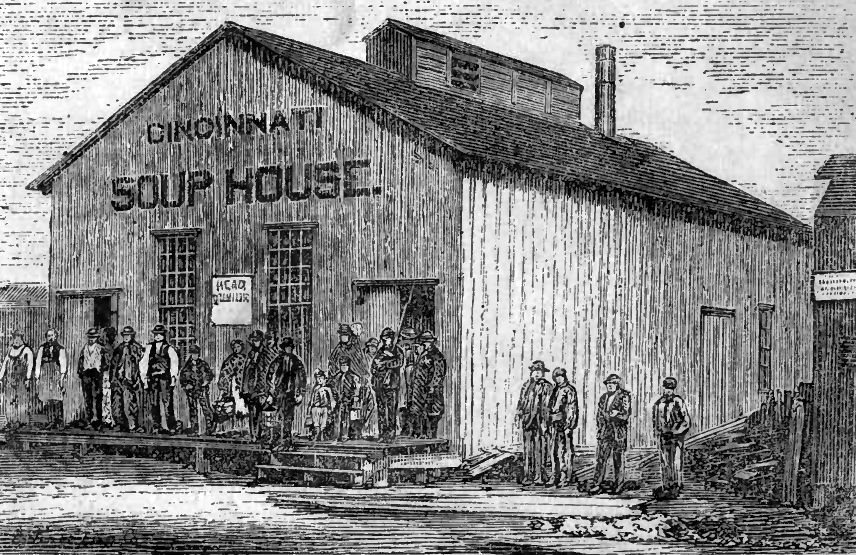 In order to make their contributions more efficient and lasting, so as to serve during the entire winter, they erected a spacious soup house at the rear of the freight depot of the Great Eastern Railroad. To convey to our readers an idea of this splendid charity, we give below a description of the CINCINNATTI SOUP HOUSE.

The Cincinnatti soup-house, was located at the cor. of Green and Carroll streets. The building, a plain frame structure, 30×50 feet, erected at a cost of $2,500. The machinery essential to its operation was simple and cheap. The soup was cooked in six large tubs, each filled with pipes, through which the steam was admitted. The ingredients of the soup were beans, rice, barley and vegetables of all kinds. The cooking was thorough, and the soup produced was not excelled by that of the same kind furnished at the best hotels in the city. The establishment has a capacity to furnish 16,000 gallons daily.

The rule was to give each person one-sixth of a gallon. About 3,500 were daily served. This soup-house was the only point of supply. There was, however, another point of distribution at the barracks, corner of Centre avenue aud Harrison street, where about half the amount was dealt out. Another place of distribution was established on the North side. At the central souphouse it was furnished from 7 in the morning until 7 in the evening. At the barracks from 9 until 5. Seven-eighths of all those who applied were women and children whose husbands and fathers were, to a certain extent, occupied in the various industries of the city. 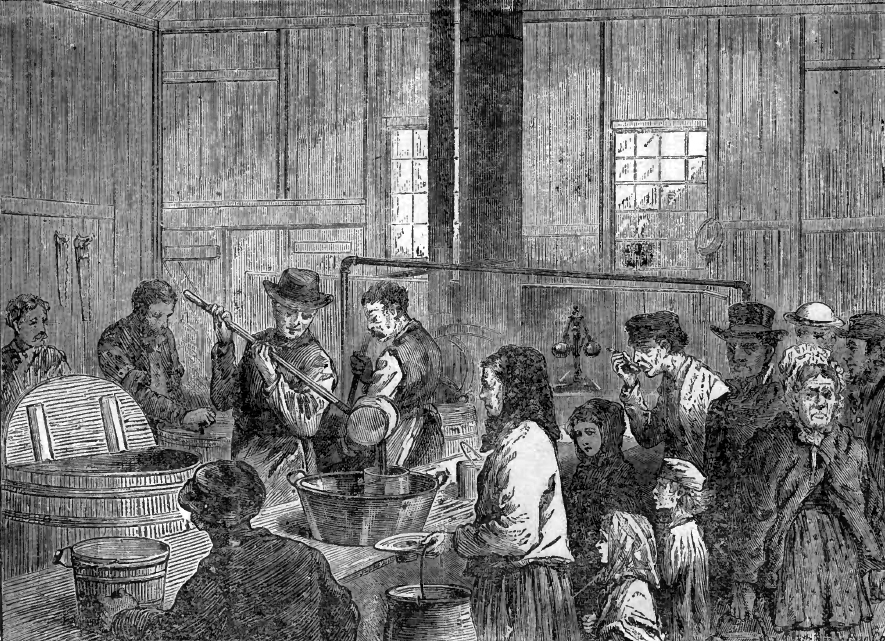 The low rates at which people were fed will perhaps astonish most people when they learn it. The entire cost of running this establishment was only $241.60 per week, including all contingents. For this sum they furnished 24,500 rations a week. This makes the soup about one cent per .ration, or six cents per gallon. By increasing the amount it can be furnished for four and one-half cents per gallon, making the entire expense of feeding one person for a day not more than four cents, supposing the diet to be entirely of soup.

The institution was under the especial superintendence of Rev. R. Frankland, formerly connected with the Cincinnati Bethel and many other worthy charities. It was supported by a fund of $25,000, set aside for that purpose from the special appropriation made for Chicago relief by the Cincinnati Council. The advisability of selling this soup at a very moderate rate to those who do not desire to receive it as a charity, has been considered and it is possible that some plan to accomplish that end may be adopted.

It will thus be seen that the charity of Cincinnati was not only upon a grand scale, but conducted with intelligence, and upon such economical, and wise principles, that their benefits were timely, effectual anand likely to continue as long as the necessity for them existed.