There’s just one way that society is going to celebrate Halloween to night and that s by saying farewell to the Fair. The Century club is closed and so are some of the other places in which socialites gathered for rest and refreshment during the two summers of the Exposition; the weather may be so cold that fur coats, muffs and galoshes will be the only comfortable, and every one knows the crowds will be immense tonight, but all “the pretty world” is planning to visit the Fair grounds just the same. 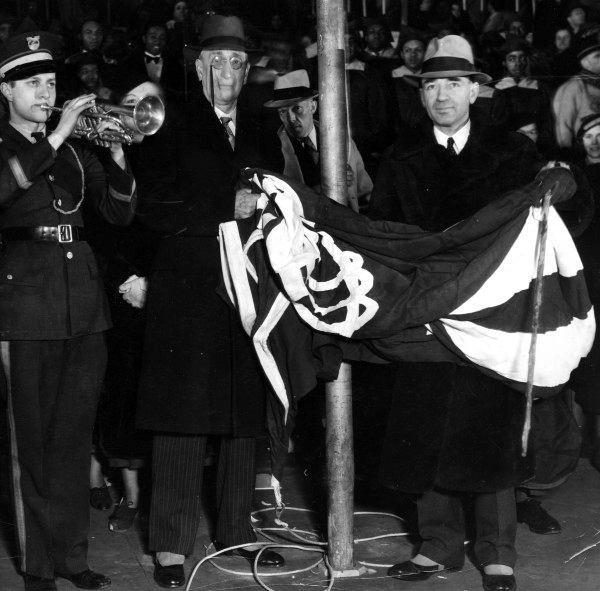 LOWER WORLD’S FAIR FLAG IN LAST OFFICIAL ACT OF DRAMA THAT WAS CENTURY OF PROGRESS
A Century of Progress Exposition closing ceremony, October 31, 1934
Midnight. Lames Cowhey, bugler (left), President Dawes (center) and Major Lenox Lohr, manager. The two officials lowered the flag as Bugler Cowhey sounded taps to end the Fair, following the closing of the gates. A record crowd of 363,700 attended the Fair on its last day.

There will be a very strong feeling of sadness underlying the surface hilarity and joyousness that will predominate tonight for every Chicagoaa must feel sorry that “the gates “will close forever” on the physical manifestation of Chicago’s courage and determination in the face of great odds.

The closing of A Century of Progress marks the passing out of our lives of something so beautiful and so lovely that the closing celebration cannot be altogether gay in spite of the, plans the clubs and concessions are making to provide souvenirs and everything else that might enhance the carnival spirit of the occasion.

The official closing ceremonies are to be held at midnight in the Court of States on the island, but before that time there will be numerous dinner parties in all the places in which society has dined for two summers.

Well aware that most of their members will want tn make a final visit to A Century of Progress today, the Chicago Wellesley club has arranged a luncheon for 12:45 this noon in the Trustees lounge. 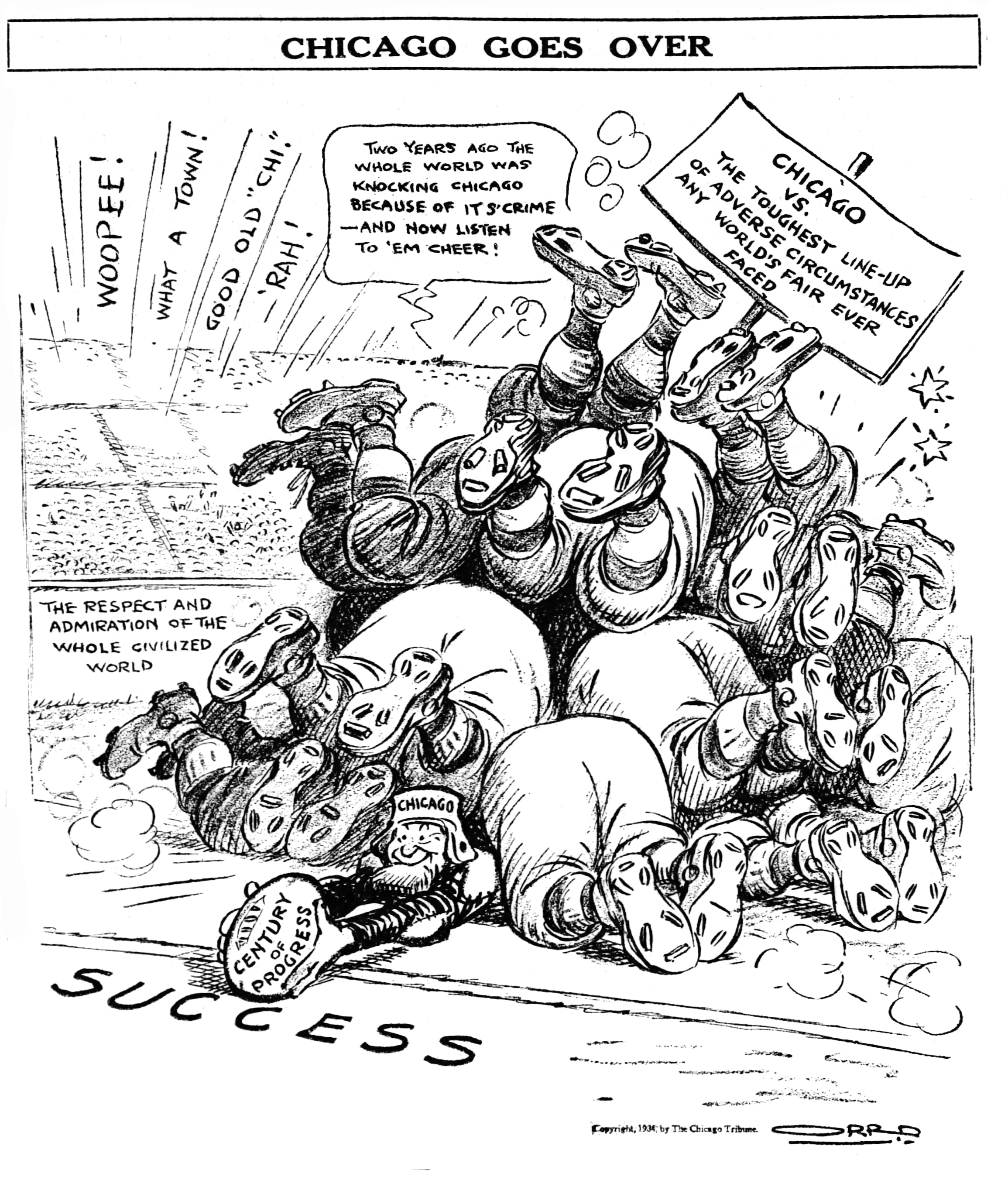 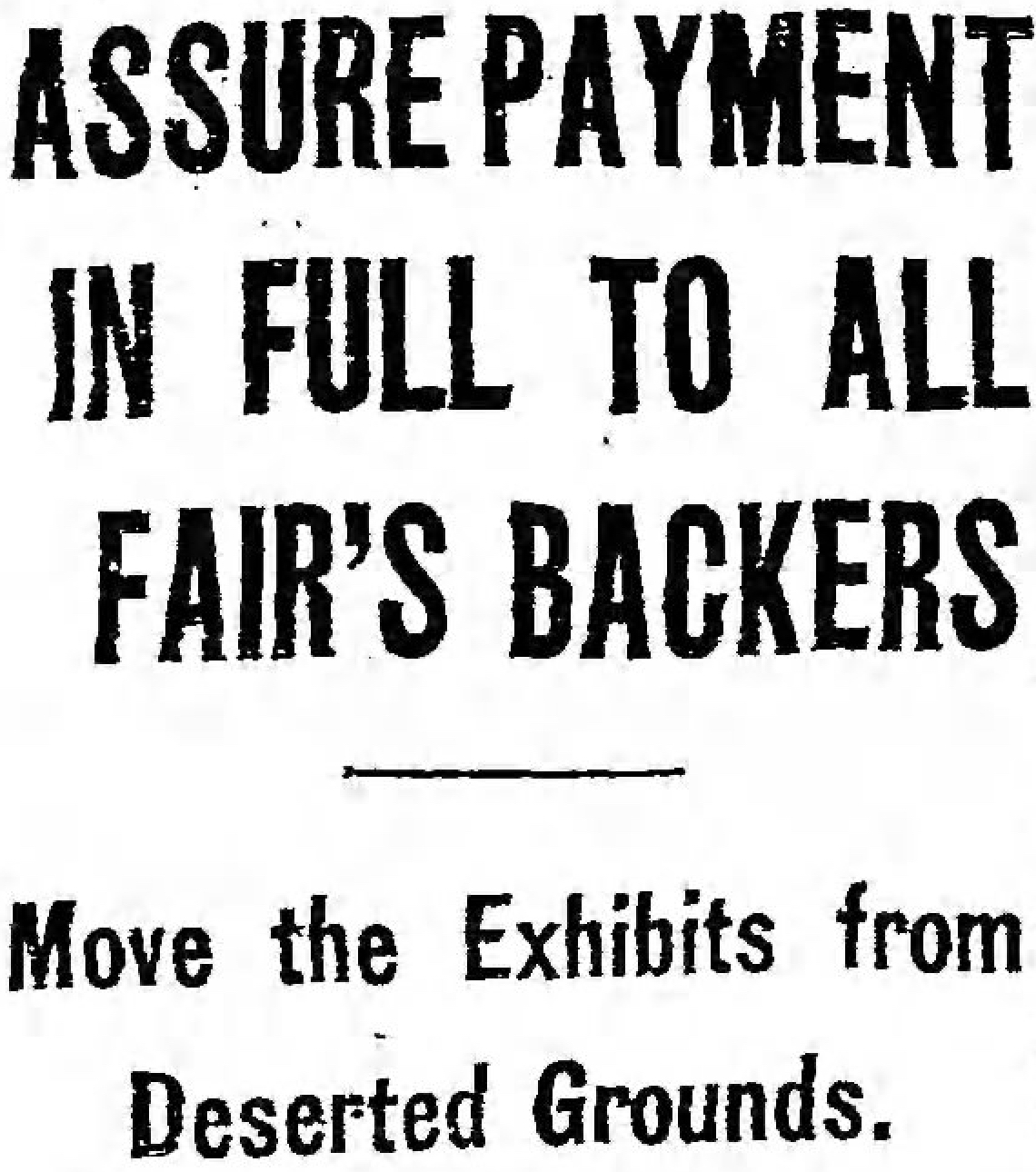 The Fair yesterday was practically a deserted village. Torn paper, empty bottles, and debris of all kinds littered the streets. Beautiful lawns and shrubbery were ripped and shattered. The only activity was the rumbling of big trucks and the shouts of small groups of workmen removing the exhibits which for two seasons had thrilled millions of viewers.

Following a survey of the grounds, which the night before had been jammed with the greatest crowd of the two years, officials estimated the damage at only $5,000. If the Fair were to reopen in the same form the damages would have been $75,000, but a great portion of damage was to equipment and scenery that was to be destroyed anyway.

Crowds Destroy Property.
The damage done by the final night crowds was mainly to exteriors of buildings and to garden spots. As the evening wore on roistering groups began a mad hunt hunt for souvenirs. Signs were ripped off of buildings and carried away. Then, as the lack of adequate police protection was realized, the souvenir hunting became vandalism.

Along the Avenue of Flags youths climbed the light poles and began unscrewing the bulbs and throwing them onto the concrete pavement.

The greatest damage was to lawns and flowers, some being torn up for souvenirs and others merely destroyed. Chairs were thrown into the lagoons and soon the general scene was one of wreckage. Visitors were not permitted to carry the souvenirs out of the gates, however. Husky police stood in line and where necessary resorted to force to regain Fair property. 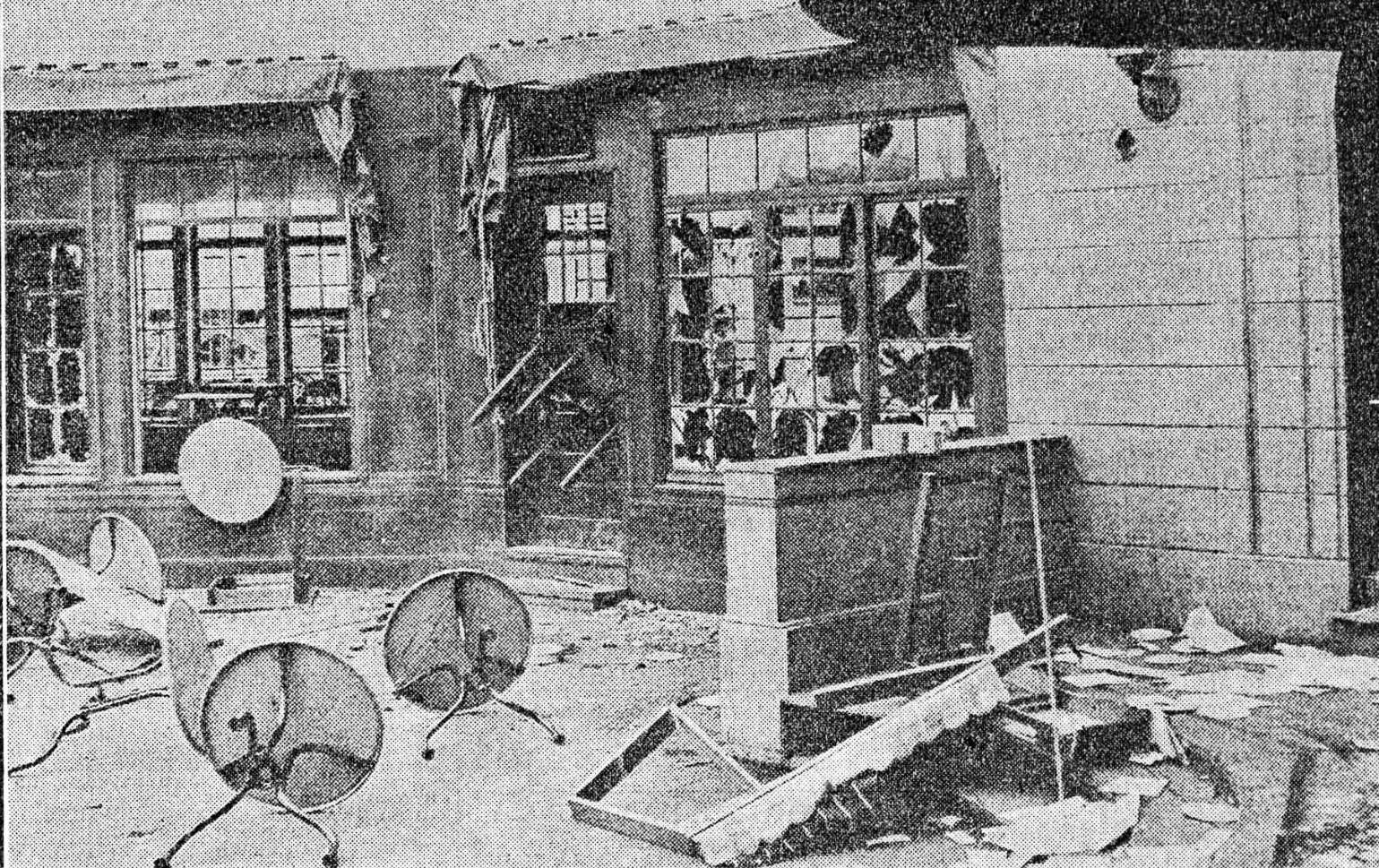 RECORD BREAKING CROWD LEAVES WRECKAGE IN WAKE AS FAIR CLOSES.
View yesterday inside the Streets of Paris on the day after crowd of 372,000 bade farewell to
the World’s Fair of 1934, combining the closing festivities with wild Halloween celebration. Many other places suffered a like fate.

Will Pay All Notes.
But officials were happy. The damage meant nothing, for the books showed the Exposition to b=have been a success far in excess of the hopes of the officials at the beginning of the year. Barring unexpected accidents the Fair within a few months will have paid the small balance remaining on its $10,000,000, gold note issue, and will have gone down in history as the only international exposition to pay all of its obligations.

As the post-Fair activities were getting under way yesterday, holders of the gold notes were appearing at the City National bank for another payment on their securities. Yesterday’s payment on principal, plus interest at 6 per cent to date, left an unpaid balance of $587,500. Here is a general plan of how this will be paid up.

$305,000 Up as Pledge.
The Fair has cash in the amount of $305,000 posted as a surety with the south park board. Approximately $900,000 is on hand to care for the expenses of the demolition. From demolition the Fair, conservatively figuring, will realize $100,000. From the total sum it will be necessary to save a little more than half a million dollars.

M. M. Tveter, controler, yesterday afternoon made public a financial statement showing the Fair to be in a condition almost guaranteeing payment of notes on full. A month ago Mr. Tveter announced that a final attendance of 16,500,000 would permit the Fair to pay out. The total was only 14,000 less than the figure estimated at that time, and the controler’s prediction apparently will be carried out.

Biggest Day—Biggest Week.
Final tabulation yesterday showed the total for the closing day of the Fair to have been 372,317, the largest attendance by several thousand of any day in two seasons. Counting tickets sold but not used, the final total figure for the year was 16,486,377 paid admissions. The final day concluded a period of five days during which paid admissions were 1,072,556.

The largest full week of seven days during the balance of the summer was 1,053,393 paid admissions. The two other record holding days of the 1933 and 1934 Fairs were the Sunday before Labor day in 1933, with admissions of 367,004, and Constitution day at the 1934 Fair when special concessions and admissions booklets drew 359,671.

A Century of Progress Exposition Closing Ceremony Certificate and Poster

During the entire period of the Fair, from Jan. 5, 1928 to the present, the Fair spent approximately $10,750,000 for pay rolls. Estimates are that the entire production cost approximately 40 million dollars, including money spent by the Fair, by concessions, and by exhibitors.

Start Cleaning Grounds.
Activity at the Fair now, according to Major L. R. Lohr, general manager, will proceed in this manner. First all exhibits will be moved out, then all worthwhile chattels will be sold. The Fair will supervise demolition by private exhibitors and concessionaires. The Fair will have its own demolition. All private concerns not completing demolition will be forced to do so by the Fair. Finally the Fair will reconstruct roads and parkways, returning the grounds to the park system as they were when construction started.

All private exhibitors must be out by Feb. 1. The park system has sixty days in which to decide what if any buildings are to be retained. According to Maj. Lohr’s estimate, the demolition will be complete in about a year. 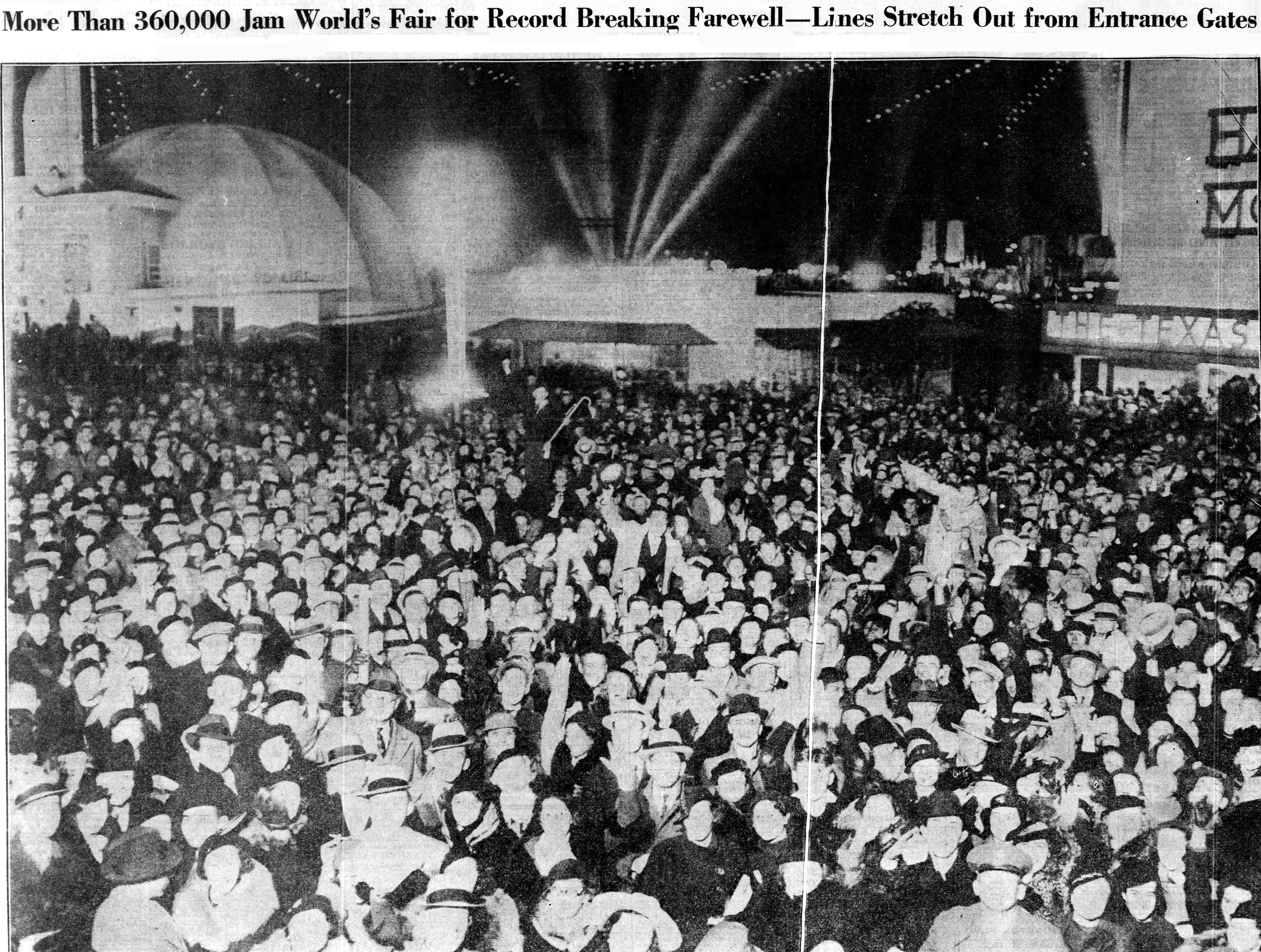