Queen Lillian Anderson presenting Postmaster General Farley with two medals, one for himself and the other for President Roosevelt, at the Fair opening exercises. At the right is L. W. Roberts, assistant secretary of the treasury.

VAST CROWDS JAM MICHIGAN AVENUE TO WITNESS PARADE OPENING A CENTURY OF PROGRESS. Scene yesterday looking north on Michigan avenue from Jackson boulevard as the St. John’s Military academy cadet corps was passing. The Chicago Art insitute is in the background. The parade was climaxed by the ceremony in Soldiers’ field which officially opened the Exposition.

QUEEN OF CENTURY OF PROGRESS, PICKED BY THE TRIBUNE, SALUTES CROWDS DURING PARADE. Miss Lillian Anderson of Racine, Wis., victor over thousands of other beauties in $20,000 queen competition, greeting crowds in Michigan avenue yesterday from her throne on float in parade. In the background of the picture is the Tribune tower. A vast assemblage witnessed the parade and hailed the queen.

QUEEN SMILES ON SCENE SHE RULES. Closeup of Miss Lillian Anderson on her throne in the parade when she reached the full attainment of the ambition of all girls in the Tribune contest.

THOUSANDS OF VISITORS PASS THROUGH GATES OF A CENTURY OF PROGRESS ON ITS OPENING DAY. View looking north in the Avenue of Flags yesterday afternoon as visitors were flocking in to see exhibits. The Adler Planetarium can be seen at the north end of the avenue and the Sears, Roebuck building on the left.

NOTABLES AT CEREMONY WHEN STAR S RAYS TURNED ON FAIR LIGHTS. Left to right: Dr. Edwin B. Frost, noted blind astronomer of the University of Chicago; Gov. Henry Horner and Prof. Philip Fox, director of the Adler Planetarium, at ceremony in Hall of Science.

IMPULSE FROM STAR ARCTURUS CAPTURED BY POWERFUL TELESCOPES TO TURN ON LIGHTING SYSTEM OF THE WORLD FAIR. General view of the crowd assembled last night in the court of honor of the Hall of Science to await the instant when the lights were turned on. The star Arcturus is 40 light years away and its rays have been traveling to the earth since the Columbian exposition in 1893. The fair grounds soon after this picture was taken was transformed into a radiant array of lights.

WHITE HORSE PLAYS ITS PART AT QUATZ ARTS BALL IN PARIS. Mr. and Mrs. John B. Barnes with white horse at Streets of Paris event early today. The photographer neglected to state if the horse was to be used by Lady Godiva or by one of those in attendance at party.

HALL OF SOCIAL SCIENCE SEEN THROUGH DISPLAY OF FIREWORKS. Striking view taken during the fireworks display at A Century of Progress last night. The lagoon separating the mainland and Northerly island is shown with the Hall of Social Science on the island in the background. The fireworks display was a treat for the crowd on the Fair grounds.

BRILLIANT DISPLAY OF FIREWORKS FEATURES OPENING NIGHT OF A CENTURY OF PROGRESS EXPOSITION. A view of the fireworks display last night with one of the towers of the Sky Ride showing among the flares. The fireworks were set off from barges anchored in the lake and were visible for many miles from the Fair grounds. This display followed the lighting of the grounds by rays captured from the star Arcturus. 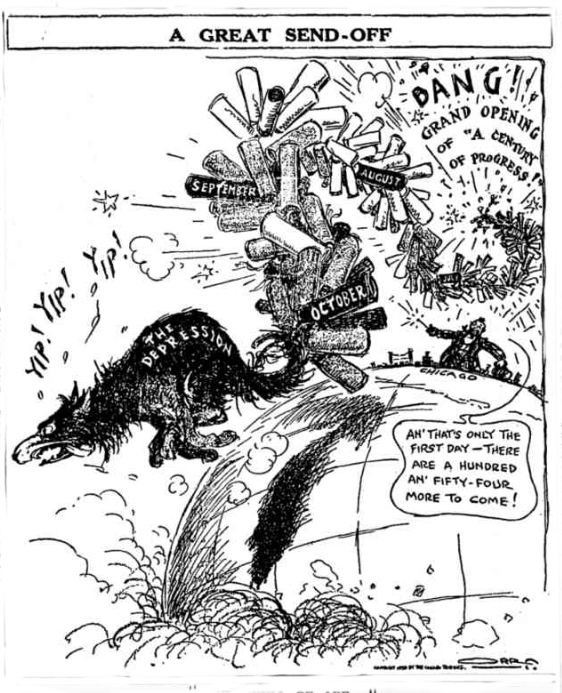