Adler Planetarium & Terrazzo Esplanade
Adler Planetarium and Astronomical Museum is a permanent scientific institution which, by its location on the promontory at the northeast corner of Northerly Island, is included in the Exposition grounds. It supplies the Astronomy section of the basic science exhibits, supplementing those in the Hall of Science. An intricate scientific mechanism, the Zeiss Planetarium projector, provides the spectacle of the heavenly bodies as seen from the Earth.

It is the first one to be erected in the United States and one of only a few in existence.

The hourly lecture-demonstrations during the period of the Exposition will show the daily motion of the sky with sun, moon, planets, and stars rising and setting, whirling about the pole; will show the annual motion of the sun with the months swiftly passing and the planets tracing their intricate paths; and finally, there will be an alternative course, either taking the audience to the southern hemisphere to see the southern sky with the Southern Cross, or toward the North Pole to view the Midnight Sun, experience the six months’ day and six months’ night with the aurora playing above.

Should you arrive during a lecture you may occupy the time in the museum halls by examining the celebrated collection of ancient and modern astronomical instruments. The Planetarium is under the direction of Dr. Philip Fox. 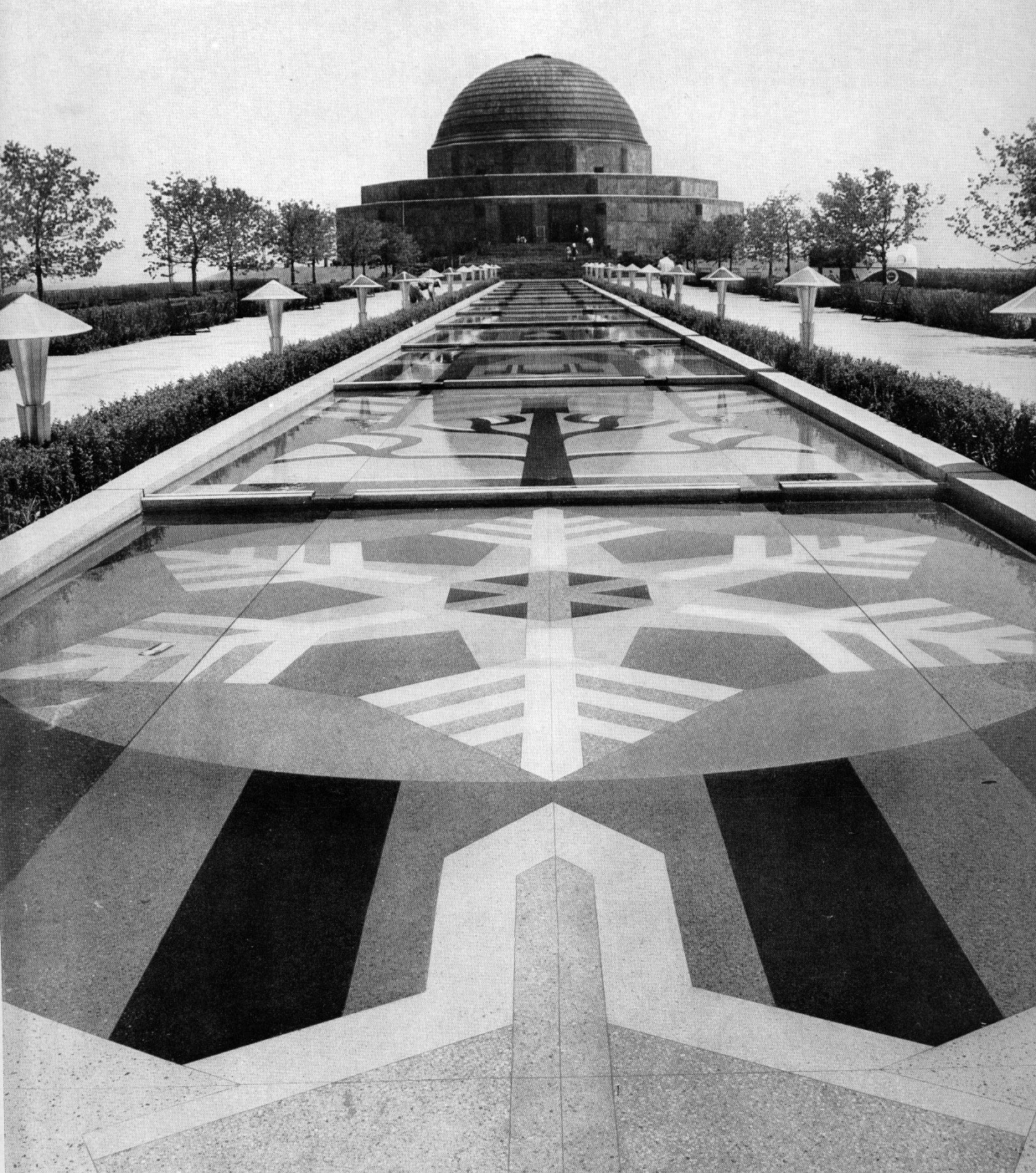 Approach to the Planetarium from Planetarium Bridge. The esplanade, of brass-stripped terrazzo
mosaic, consists of two promenades, each 19 feet wide, between which is a series of shallow fountain basins, each basin in mosaic design depicting a month of the year. The promenade is built by the National Terrazzo and Mosaic Association to remain permanently in its place. 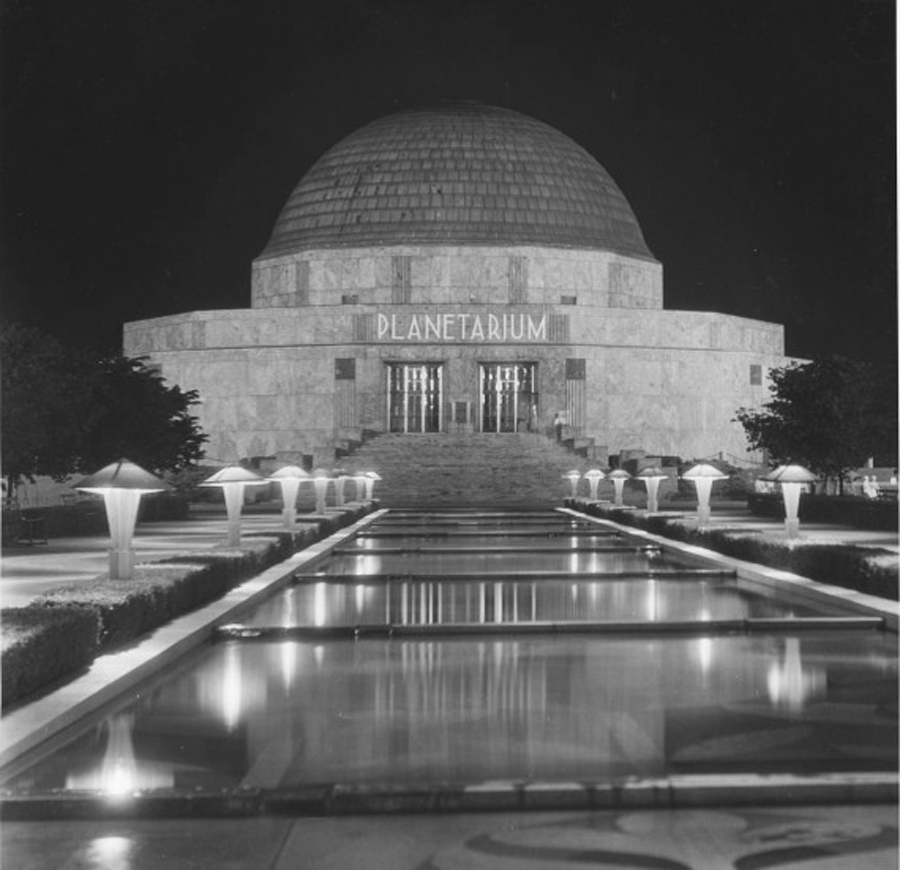 The light from the star Arcturus was converted into electrical signals, sent to the Adler and used to turn on the lights at the World’s Fair on opening night. 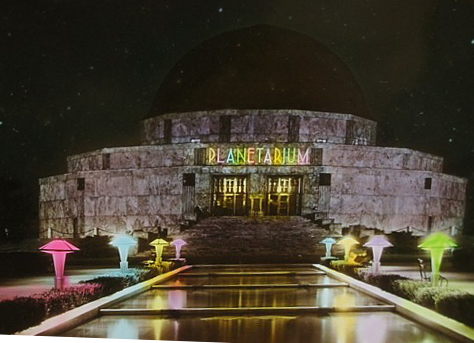 The following article is from Chicago the World’s Youngest City published in 1929, written by Philip Fox, Director

The Adler Planetarium and Astronomical Museum

“Sir, We are told, and, if I remember right, it is also your Opinion, that three of the finest sights in Nature, are a rising Sun at Sea, a verdant I.andskip with a Rainbow, and a clear Star light Evening.” —Thomas Wright, 1750

Lake Michigan provides Chicago with the glorious opportunity, rare for an inland city, of viewing the first of these wonders. The great parks provide the verdant landscape for the second. But the very greatness of Chicago, with its vast industrial area and millions of people, its night sky flooded with artificial light, precludes the opportunity to see the greatest of natural wonders, the starry heavens.

Sixty-three years ago, just as the country was emerging from the throes of the Civil War, a group of citizens of Chicago formed the Chicago Astronomical Society and brought to the city the greatest refracting telescope then in existence, the eighteen and one-half inch lens of the Dearborn Observatory. Of that time it has been written :

Nor should it be forgotten that it was but a scant half century since the first settlement of Chicago, when the chief outlook was for hostile Indians, to the establishment of the Dearborn Observatory and viewing the heavens with the most powerful refractor of the World.

In order to re-awaken interest in the science of astronomy and the knowledge of the heavens, Mr. Max Adler has presented to Chicago a Planetarium and Astronomical Museum. An imposing edifice in which to house this institution is being erected near the Field Museum and the Shedd Aquarium; and with them forms a splendid trinity for the study of “the Heavens above, the Earth beneath, and the Waters under the Earth.”

As the name implies, the building serves a dual purpose. Its shape is a regular dodecagon. On the exterior faces, in succession, are the sculptured representations of the Signs of the Zodiac. The exterior diameter of the building is 160 feet. Centrally located within it is a circular hall seventy feet in diameter, surmounted by a hemispherical dome. Within this central hall is the planetarium proper. The wide surrounding corridor contains the Museum. 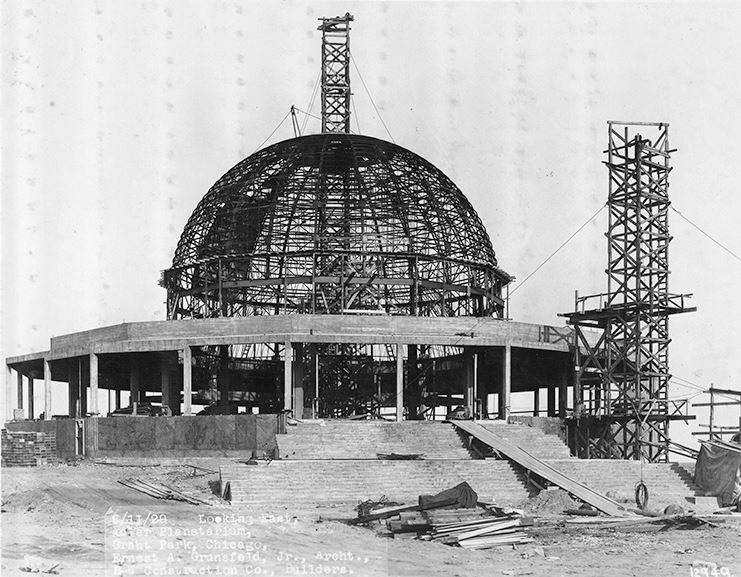 A planetarium is a theater of the sky, in which astronomy is dramatized. The stage is a great dome. The actors are the stars, the great galaxy, the planets, the Sun and Moon, the nebulae and clusters. The constellations take their places in the vault of the dome; the planets, Sun and Moon thread their complex but orderly courses among them; the Moon presents its sequence of phases; the seasons follow their routine. All the motions of the heavenly bodies and the phenomena which result from them are presented. Astronomy unfolds its mystery, yet the majesty remains.

The great, grotesque instrument on its steel stilts, studded with lenses numerous as the facets in the eye of a fly, projects the stars as brilliant points on the interior surface of the great dome. They blaze there with so perfect illusion that all sense of enclosure is lost; and one is in the open, under the starlit sky. The projector, in its perfected form, has one hundred and nineteen separate lenses. Thirty-two are for the stars; eighteen are for the nebulx, star clusters and the brightest star, Sirius; thirty-two are for constellation names; eighteen are for the members ofthe solar system; and nineteen for various reference points and circles. The simple projection of the constellations will afford opportunity for a revival of knowledge of the sky. Ancient myths are there preserved in their most enduring form.

Electric motors drive the mechanism to reproduce the motions of the heavenly bodies. The diurnal and annual motions of the Earth and their effects are readily realized. Celestial motions or cycles requiring years or centuries can be reproduced in as many minutes. The acceleration detracts nothing from the majesty of nature’s slow motions; but on the contrary, aids toward the understanding of them. The different aspects of the sky as seen from different terrestrial stations can be achieved by regulation of the instrument. The increasing elevation of the Pole Star as one travels toward the north is clearly revealed. The sky can be seen as it appears in the Southern Hemisphere with the Southern Cross high in the heavens. By another adjustment, the effect of the precession of the equinoxes can be shown and we can see the skies as they appeared to Hipparchus who discovered and evaluated this precession; the skies as described by Homer can be reproduced; the skies of the time of the Pyramid builders, when Thuban was the Pole Star; or of that distant future date when the gorgeous Vega will point out the location of the North Pole. “The great beauties of the skies are revealed with such force and effectiveness that the onlooker exclaims exclaims with the Psalmist, ‘The Heavens declare the glory of God and the firmament showeth his handiwork’.”

In the Museum there will be historical instruments and documents; working models of observatories and telescopes; spectroscopes in operation, to demonstrate the laws of spectroscopy and their application to solar and stellar physics; a spectrohelioscope; horological instruments; sun dials; clocks and time recorders; instruments of navigation; machines which may be set in action, grinding lenses or mirrors; devices for showing dynamical laws; machines for measurement and computation; and numerous transparencies depicting the greatest achievements in astronomical photography. Exhibits will demonstrate, so far as possible, the methods and procedure of observation; and will afford clear insight into the achievements of astronomical research.

Astronomical research will have an important place in the program of this institution.

America long has stood on the frontier of astronomical research, and in such studies Chicago institutions have played important roles. It has been said, however, that we have lingered behind in the popularization of the science. With the Adler Planetarium and Museum, Chicago has stepped into the forefront in the popular presentation of astronomy; and in such way that the educational value and the aesthetic inspiration share the field equally. 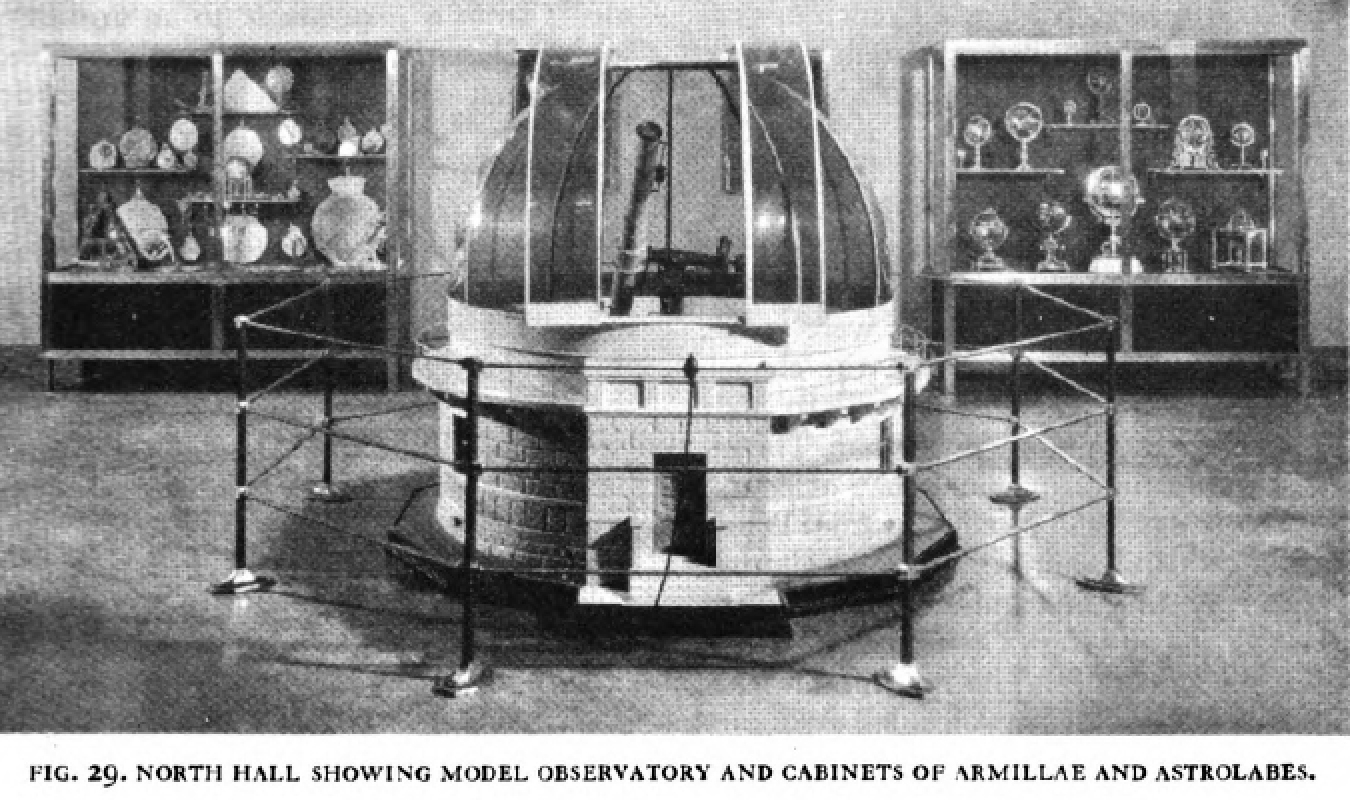 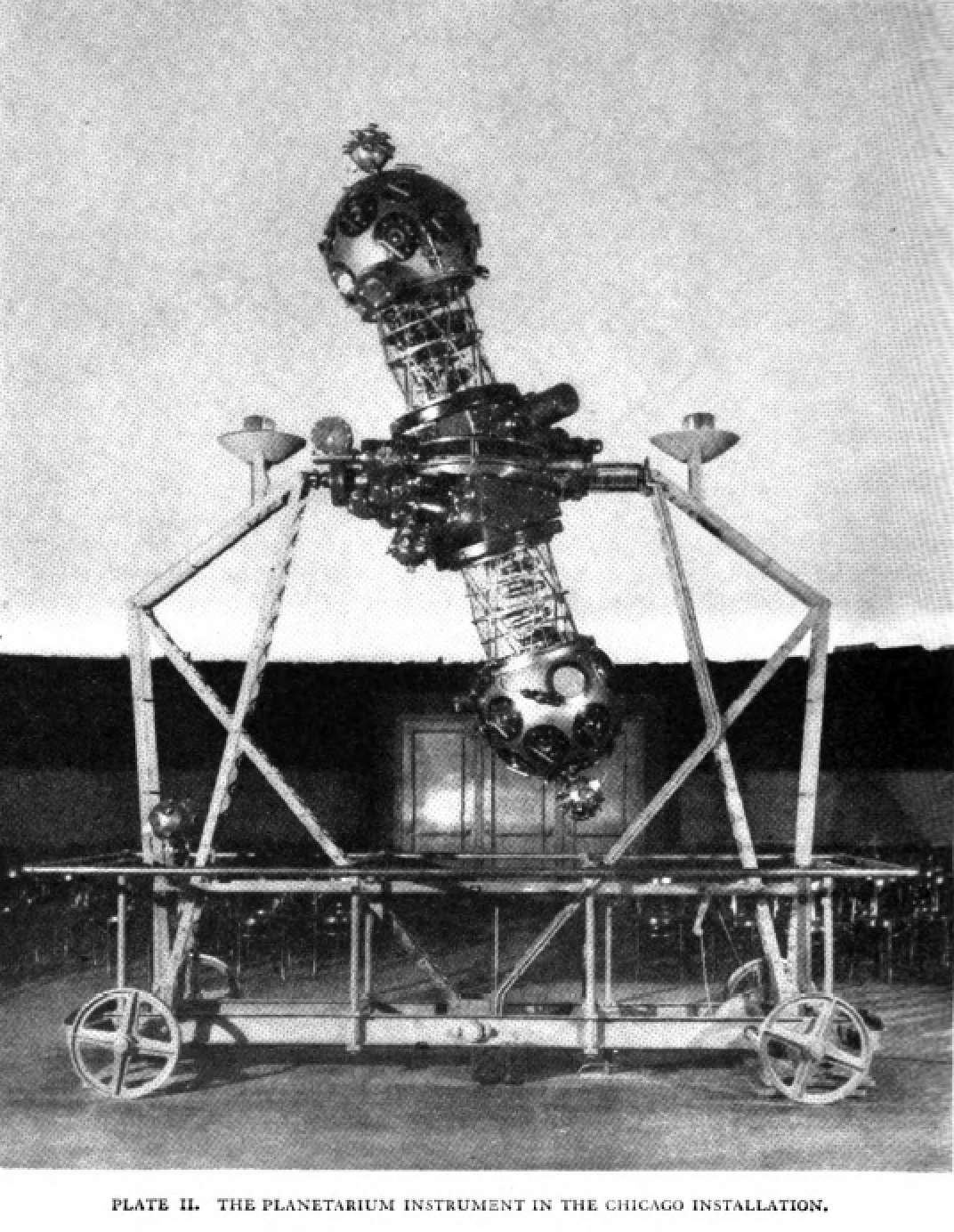 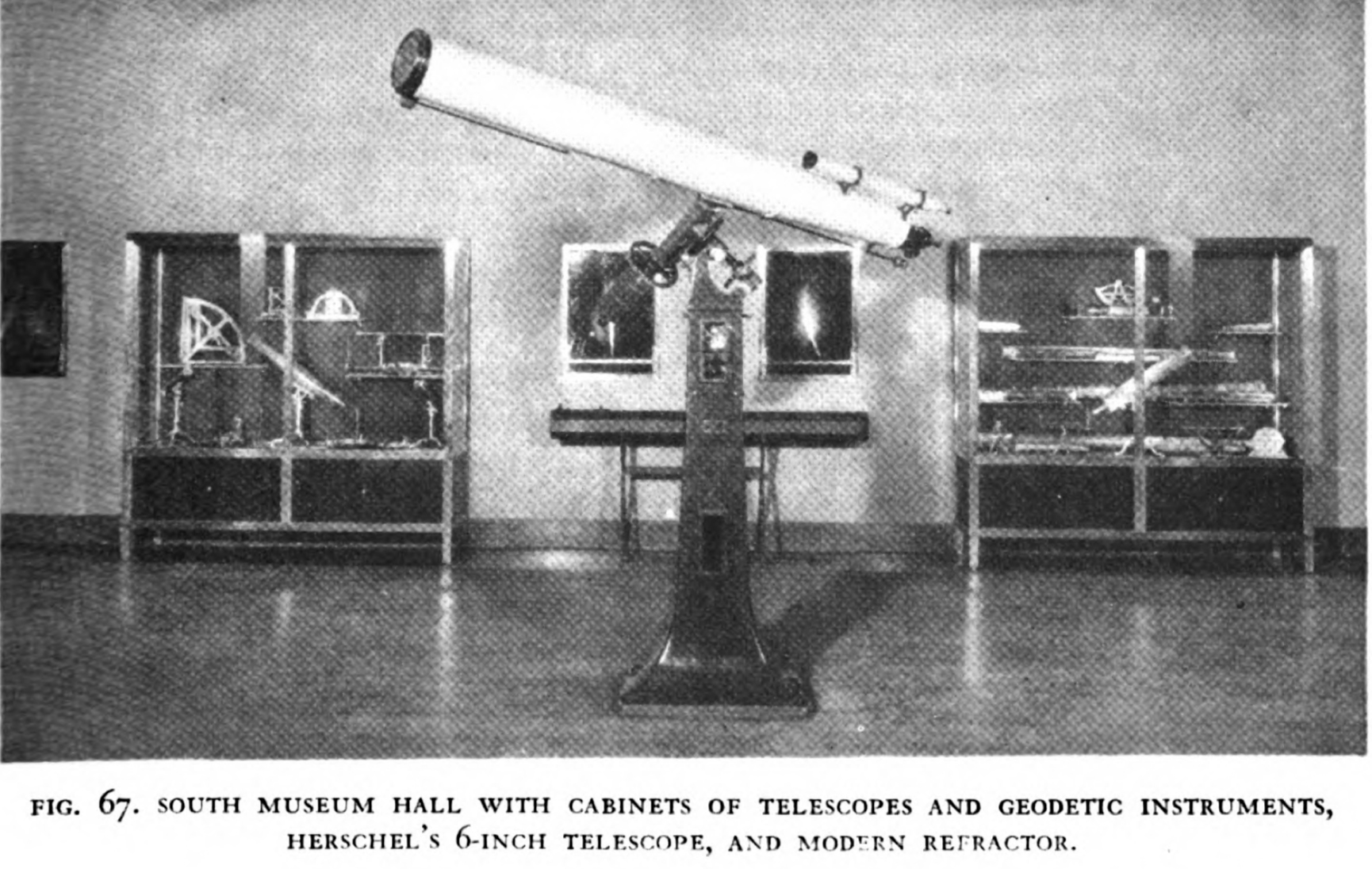 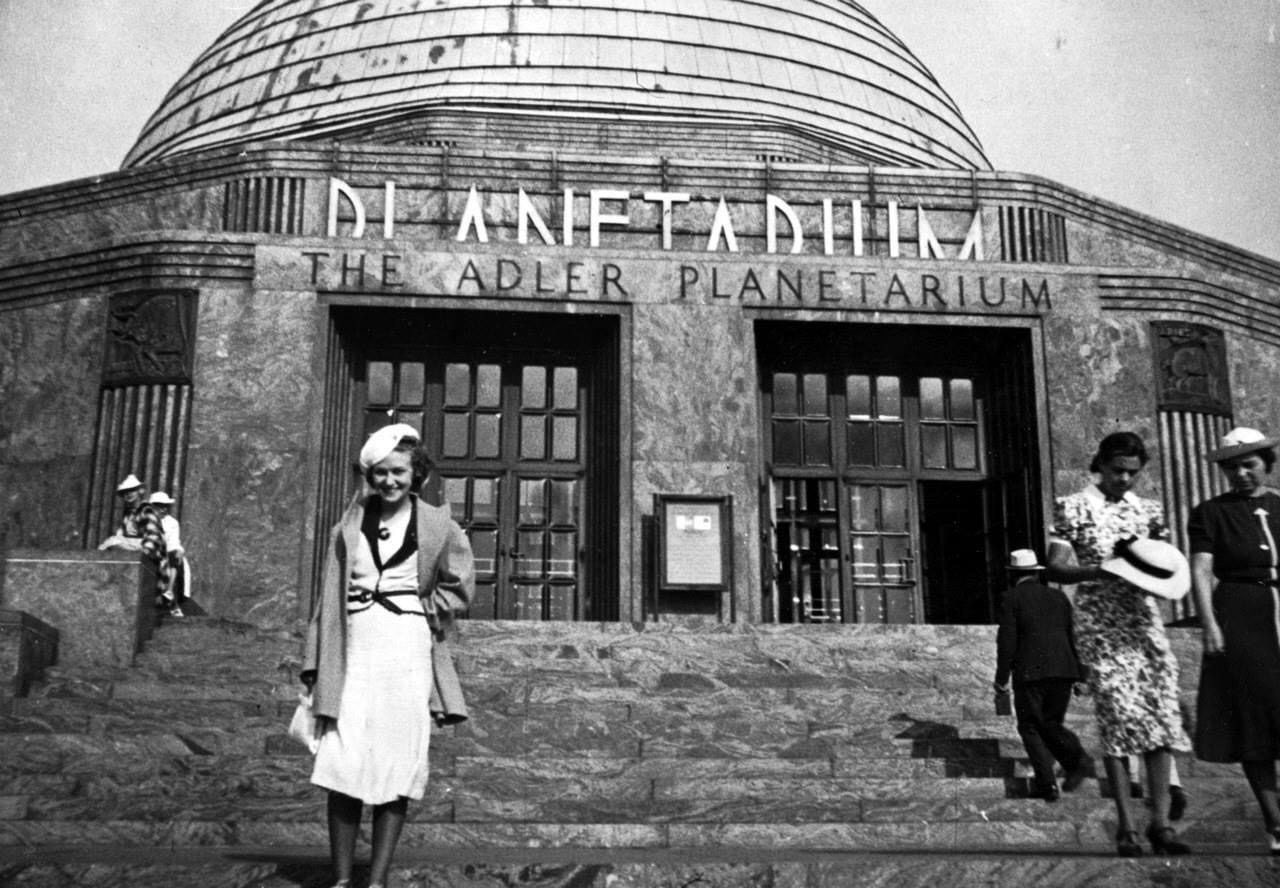 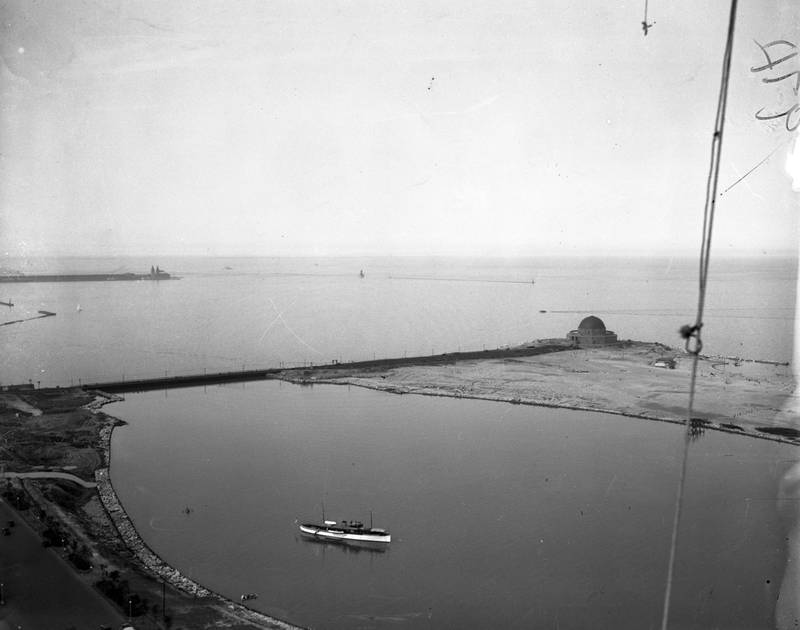 An aerial view of the Adler Planetarium at Lake Michigan just after it opened, circa June 1930.