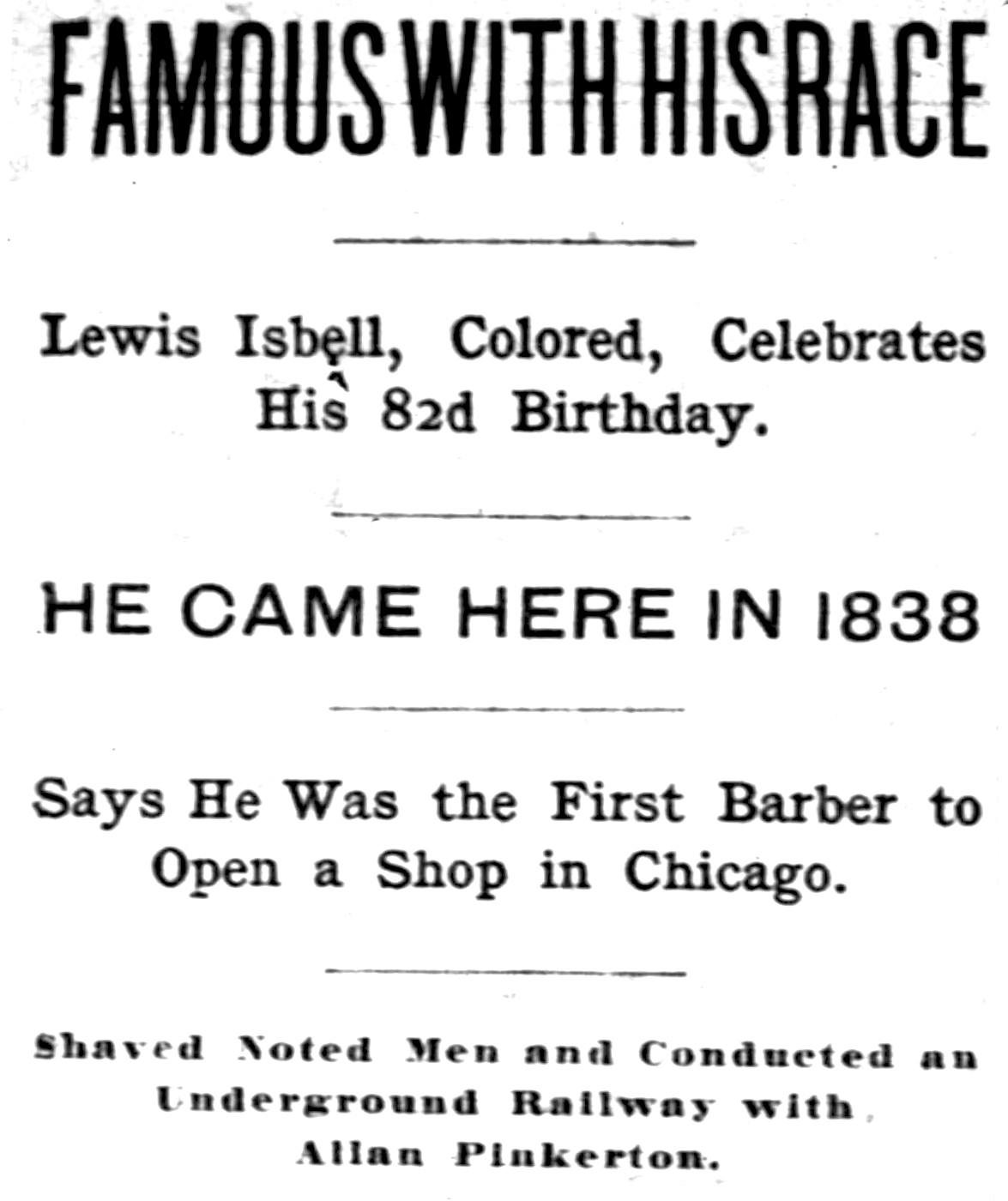 “Uncle Lewis” has the distinction of being the pioneer colored resident of Illinois and Chicago. He is the dean of Chicago barbers, and takes great pleasure in recalling the days when the barber business in Chicago was in its infancy. He was born in Prestonsburg, Floyd county, Kentucky. In 1823 his master gave him and some 300 other slaves their freedom and brought young Lewis to Paris, Ill. “Uncle Lewis” never likes to mention his ever being being in slavery, and always asserts that his youth and the kind treatment of his master made it impossible for him to realize that he was a bondman. He was the first negro to set foot in Illinois, and he does not recall seeing another colored face until he was about 18 years of age. “Uncle Lewis” was “raised” with the “white” children of Paris, Ill., and vividly recalls the infancy and youthful days of ex-Congressman Andrew J. Hunter. 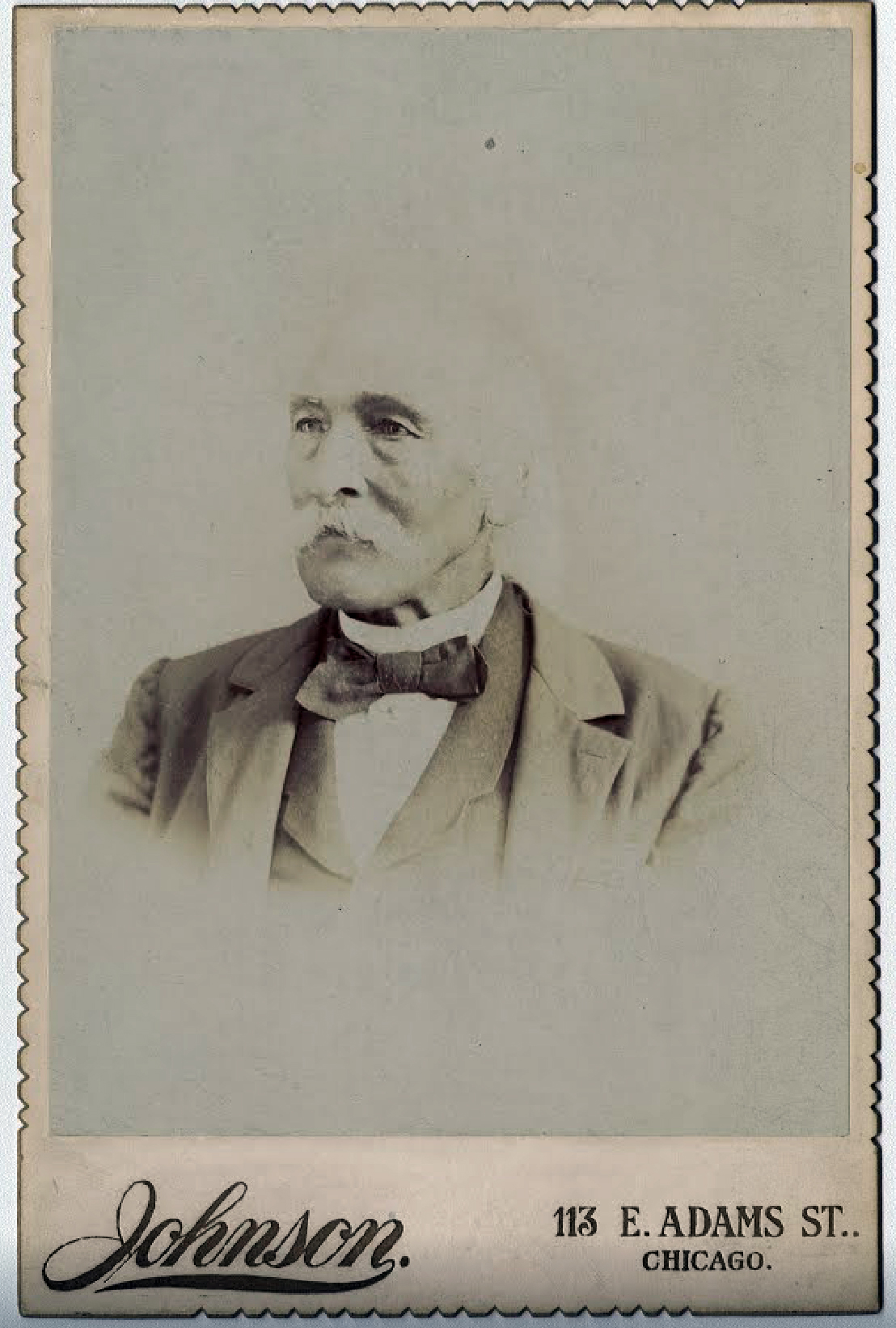 Came to Chicago in 1838.
While living at Paris he learned the barber’s trade, and on Oct. 14, 1838, came to Chicago and embarked in the business on Clark street, near Lake. When the old Sherman House was built he opened a shop in that hotel, and for twenty-five years worked in it at his trade. There were only ten colored people in Chicago when “Uncle” Lewis came here, and as he says he has helped to bury all of them he is positive of being the oldest colored settler in Chicago. For sixty-five (years) he has been actively engaged at his trade, and during that time he has shaved many men of prominence. Henry Clay, Cassius M. Clay, and John C. Breckinridge were his customers during the short time he lived in Louisville, Ky. Abraham Lincoln, Stephen A. Douglas, Norman E. Judd, J. V. Farwell, H. K. Botchford, Lyman Trumbull, Cyrus McCormick, “Long John” Wentworth, Charles B. Farwell, William B. Ogden, and Joseph Medill were patrons of his Chicago shop. He shaved General Grant when the latter was a struggling “tanner” at Galena. Every mayor from William B. Ogden to John P. Hopkins, has been shaved by Uncle Lewis, and yesterday he jokingly remarked that “he thought he would go and shave the rest of them and make his list complete.” “Uncle Lewis” was the first barber to use reclining chairs in Chicago.

Friend of Allan Pinkerton.
Allan Pinkerton was a warm friend of Isbell, and during the early days of the abolition agitation the famous detective and “Uncle Lewis” worked in conjunction for the freedom of the colored race. Pinkerton would receive the fugitive slaves along the borden line, bring them to Chicago, and Isbell would ship them to Canada. It is estimated that “Uncle Lewis” assisted more than a thousand slaves in their fight to freedom. In those days he was president of the Chicago underground railroad syndicate, the object of which was to aid fugitive slaves in their efforts to get beyond the reach of their Southern masters, and many are the interesting stories of the strategy “Uncle Lewis” employed in eluding the officers of the law.1

Isbell never used intoxicants or tobacco in any form, and for the last fifty years he hasn’t taken medicine of any description. He is hale and hearty and looks as if he would have many more birthdays. Since his retirement from the barber business he has devoted his time to the selling of photographs. He never gives them away, and his prices range from 25 cents to $5, the value being regulated by the position and finances of the purchaser.

Mr. Lewis was married in Chicago in 1848, but his wife dies about fifteen years ago. Three children were born to them, all of whom are living.

NEW EATING HOUSE—Lewis Isbell, (colored) has taken room No. 69 Randolph St., where he has opened a dining room, and wil serve up meals at all hours in the best style. Ladies as well as gentlemen are invited to patronize his establishment. Day boarders will find good food at very moderate prices. Mr. Isbell is an experienced caterer for the public.

AN OUTRAGE—During the celebration at Witkowsky Hall, on New Year’s night, Lewis Isbell, the well-known barber on Randolph street, and one of the managers of the occasion, while passing through the Hall felt some one tugging at his watch chain, and upon examination discovered a man at his side who had just broken off his valuable seal. He immediately seized the thief by the throat with a grip which caused him to throw up his hands and drop the seal upon the floor. Mr. Isbell without delay conducted the thief down stairs and handed him over to the police. Friday morning the fellow was brought before Justice Miller. The astute Judge discharged the man because Mr. Isbell was colored and could not testify, and thus turned out upon the community a dangerous thief. Mr. Isbell is an old and well known citizen, and has testified in every court in this city, and upon one occasion by the decision of Judge Manierre, who has forgotten more law than this police magistrate ever knew, was allowed, and more than that, ordered to testify in an important land suit. By the action of the police magistrate a rascal has been sent into society again unpunished.

RECRUITING FOR COLORED REGIMENTS—Lewis Isbell yesterday recruited five colored men in Chicago, who were mustered i immediately and received the $100 bounty from the city and county, the same as white recruits. Colored men need nom longer be afraid to come forward; they will be equally well treated as others in all respects. There is no need of going outside of Illinois for recruitment and bounty; they will be gladly welcomed as a help to the quota of Cook county.

COLORED RECRUITS—Lewis Isbell, general recruiting agent for colored men in the State of Wisconsin, was in Chicago yesterday paying off the recruits in Col. Bross’ regiment previous to their departure. All who had not previously received it, drew their bounty and advance pay. We notice that the State of Wisconsin is giving $100 to $150 bounty for colored recruits credited to that State. Parties may apply to Mr. Isbell at Madison.

NEW BARBER ESTABLISHMENT.—Our old friend Lewis Isbell has recently opened an establishment for tonsorial purposes, at No. 123 S. Clark street, which is admirably fitted and stocked for all departments of the business. Those who have in days gone by turned in under the shadow of his voluted pole, need not be told to visit him. He has done much towards bearding the Southern tigers in their dens, and when at home he is equally good on a close shave.

STOLEN.—Some unconscious rascal, during the fire on Clark street on Saturday night last, stole all the cutlery from Lewis Isbell, the barber—about eight pairs of scissors and twenty razors. Mr. Isbell says if the taker wishes to use them he can come to his shop at No. 123 Clark street, for that purpose.

Lewis Isbell, 2723 Wentworth avenue, who is said to be the oldest colored inhabitant of the state, yesterday forwarded a petition to congress for a pension of $12 a month. He is 86 years old and states he was not an enlisted man, but was commissioned for special service in Illinois from 1863 to 1865, recruiting without pay the Twenty-ninth regiment of Illinois volunteers, colored. Isbell has no family and no means of support. He has been a slave and came to Chicago in 1838. 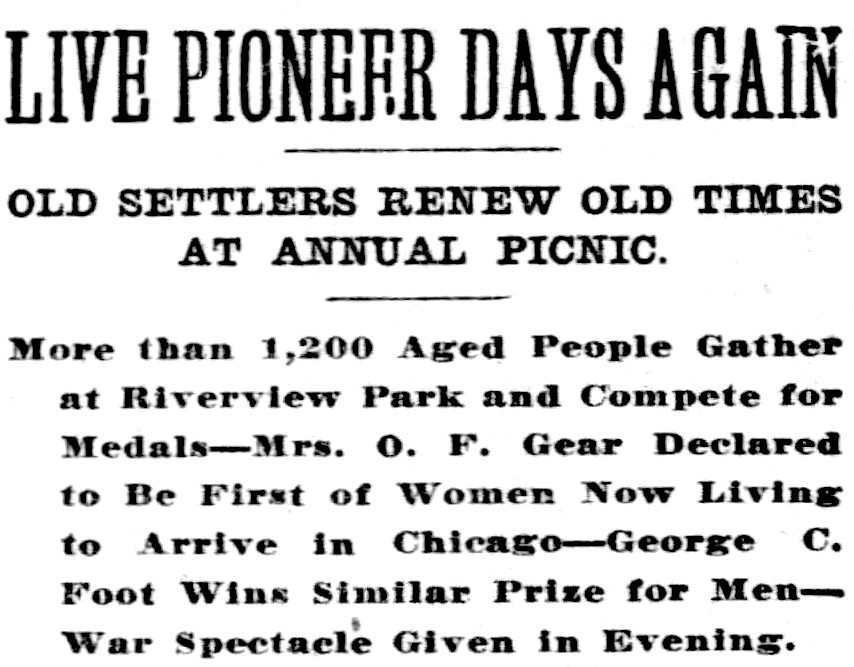 Crowding around the judges’ stand aged men and women elbowed their way to the front, each one eager to claim the title of the oldest settler in Chicago at the thirty-first annual old settlers’ picnic held yesterday at Riverview park, under the auspices of the Chicago Turngemeinde. During the afternoon more than twelve hundred old people, many of whom were hardly able to walk alone, and who were assisted by sons or grandsons, waited patiently in line. 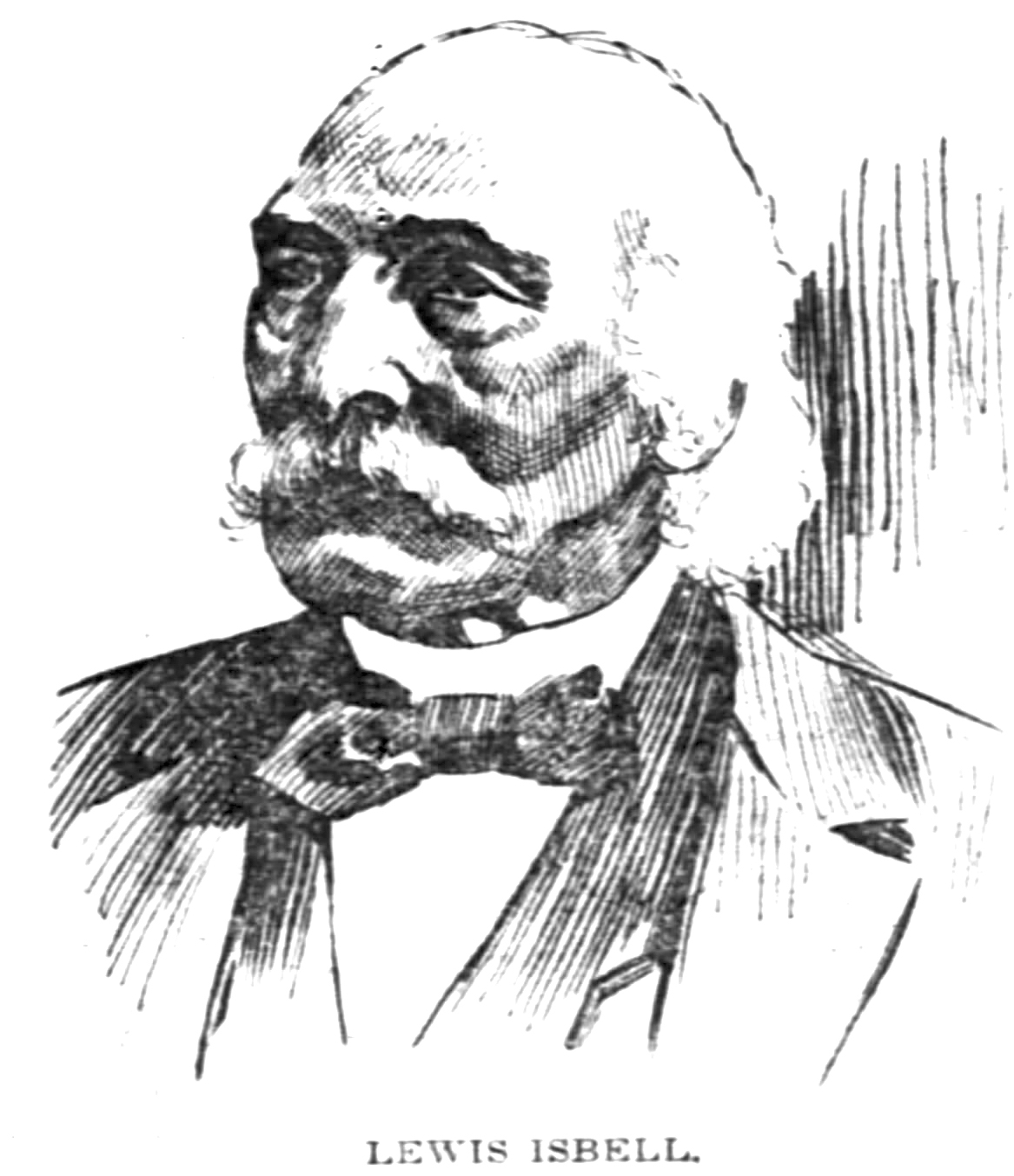 After they had left their claims with the judges the old men and women formed little groups about the grounds and told the inevitable stories of the early days of Chicago. No introductions were needed—the badge bearing their name and the year they came to Chicago served to satisfy all requirements in that line—and soon the old settlers were back in the pioneer days, living again the life at Fort Dearborn.

In a special pavilion, decorated with German flags, the couples danced again the dances of their youth. A gold medal was given to to the oldest couple on the floor. It was won by Caroline Schleinmann, 83 years old, 36 Iowa street, and August Schrader, 82 years old, 451 North Robey street.

Mrs. Gear Oldest Woman Settler.
Mrs. O. F. Gear, 3237 North Western avenue, is the oldest woman settler in the city, according to the decision of the judges. Mrs. Gear came to Chicago in 1833, when she was 9 years old. Her father, Capt. S. T. Jackson, was the first harbormaster of Chicago. She lived in Fort Dearborn during the Blackhawk war and has vivid recollections of that struggle. Mrs. Gear lives with her two children, Francis O. and Ida F. Gear. Speaking of the stories of the early settlers, Mrs. Gear said:

I always save the published stories by some of our well known men who claim to be early settlers. I read them many times and find great enjoyment in them. Why, do you know, some of them are really founded on fact—but the majority are not.

Five men were present who came to Chicago on the brig Illinois in 1834, and from the time they met until it was dark, they formed a group which no one could intrude. They are:
James C. St. Clair, 79 years old; George St. Clair, 81; Fernando Jones, 84; William H. Gale, 80; and John Weinberg, 81.

Joseph C. Snow, 987 North Leavitt street—Settler who has been in employ of one firm for greatest number of years. He has been a compositor on The Chicago Tribune for fifty years and five months.

Mary Fry, 2 Washington place—Woman settler who has been in employ of one firm for the greatest number of years. She has been a boxmaker for G. Marz & Sons, 209 Superior street for twenty-nine years.

A. B. Height and Elizabeth Height, 313 Sixtieth place—Oldest couple in Chicago. He is 84 years old and his wife is 80 years old.

Joseph and Margaret Becker, 319 Aberdeen street—Oldest couple in Chicago who were born in Germany. He is 82 years old; his wife is 79 years old.

In the evening a special program was given of the war spectacle of the “Fall of Port Arthur.” 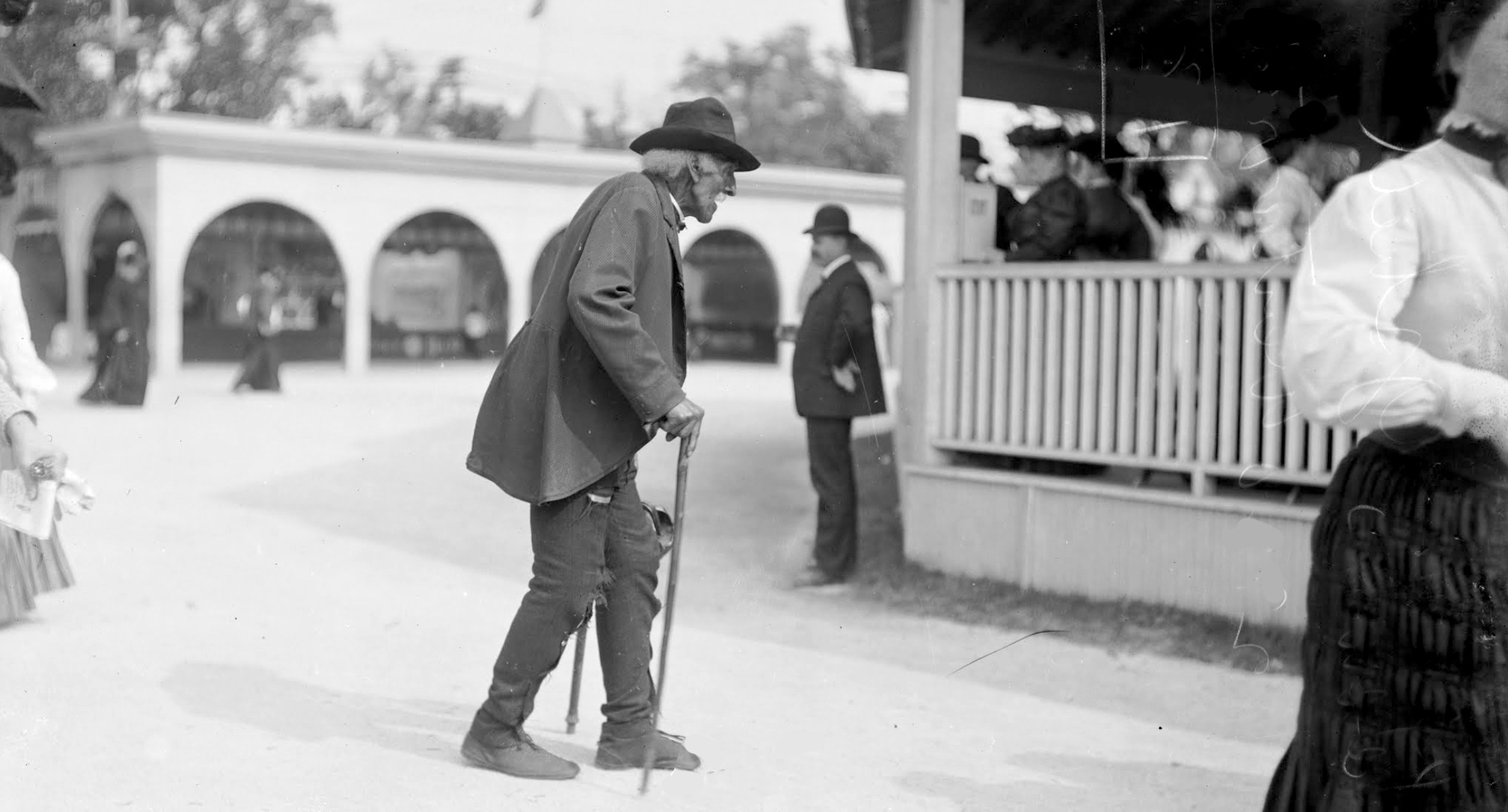