Richardson’s Tourist Guide to Chicago, the West, and the Lake Superior Country, 1904

Riverview (Old Sharpshooters’ Park)—This park includes the popular Chicago picnic grounds, Sharpshooters’ Park with a large adjoining tract, having open air amusements similar to Chutes Park and San Souci. The park is on the north side, at Belmont and Western Aves., reached by transfer from all north side surface lines, fare 5¢, or by Northwestern or Lake St. Elevated, connecting with surface, two fares, 10¢. Admission to grounds, 10¢; Sunday and special picnic days, 25¢. Average admission to attractions, 10¢. This park is one of the best of its kind.

A Half Century of Chicago Building, 1910

IN 1879 a company of Germans, members of the Krieger Verein, organized a pleasure club with the object and purpose, as expressed, of “improving rifle practice among its members” ; they were members of the Sharpshooters corps in the German army. They secured what is now the central portion of the Riverview Exposition and named it Sharpshooters Park. Mr. William Schmidt, one of the directors of the present Riverview Park Company, was one of the original members of this pleasure club. Rifle ranges were erected and the park was made use of by the members of the Club and their families for their outings.”

On the dissolution of this corporation Mr. William Schmidt and Mr, George s Goldman became the owners of the middle section of the Park, running from the entrance on Western Avenue west to the River, and continued to rent it out for picnics. The east six acres next to Western Avenue was practically cleared of trees with the idea of ultimately devoting it to amusements, and the park proper, the old grove, as it is called, was used for the picnics. 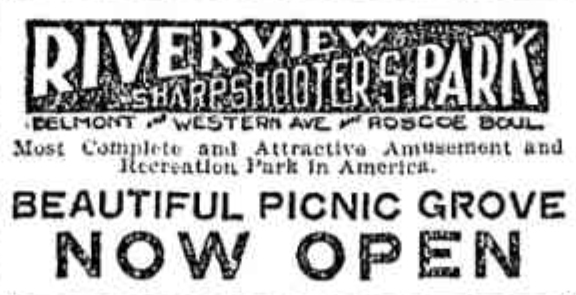 In 1904 William M. Johnson and his partner, Joseph R. McQuaide of Pittsburg, secured the lease of what is now the middle section of the park from the owners, and in that year fitted up the six acres next to Western Avenue, and commenced the amusement park business. During that season the grove was under lease to other persons, but bv an arrangement, the use of the grove was secured for the amusement patrons, in connection with the amusement park proper. The Park opened on July 2, 1904 (right), its only features being a Figure 8 Coaster, a Merry-go-round and an Old Mill and Chutes combined ; the latter feature was placed in the park by Mr. Paul W. Cooper, the present president of the Company, who was the first concessionaire under McQuaide and Johnson to break ground for a feature in tlie park.

This was the first amusement park organized or operated upon the lines of combining amusement features with a natural park, and this unquestionably will be the character of the future parks of the country, as distinguished from “show places,” called amusement parks, but which have as a matter of fact no part in the proper use of that term.

The following year the Riverview-Sharpshooters Park Company was organized, with Mr. William Schmidt as President and Mr. Paul W. Cooper as Manager; this company operated the park the following year.

At the close of the season of 1905 the Park passed into the management and in a large measure the ownership of Mr. Paul W. Cooper, Mr. X. P. Valerius and Mr. William M. Johnson; Mr. Scliniidt still remaining as director also, together with his son, George Schmidt. The executive management of the business has remained with the Messrs. Cooper, Valerius and Johnson ever since; Mr. Cooper being President, Mr. Valerius, Vice-President and Treasurer, and Mr. Johnson Secretary of what is now known as Riverview Park Company.

Battle of the Monitor and Merrimac
Opened in 1908

The Park was a success and the combination of amusement features in connection with the picnic grounds met with the approval and generous patronage of the public. From a start of six acres with a very limited capital, it has grown to over one hundred acres devoted to amusements and a thirty-acre picnic ground, and represents an investment of over $1,000,000, all this being accomplished without the issuance of any bonds or floating any promotion schemes. From the commencement of one riding device and a few shows in tents and small buildings it has now passed into history as the largest amusement park in the World, with more riding devices within its boundaries, which run from Belmont Avenue on the South to Addison Avenue on the north, than there is upon Coney Island, New York, including all its parks and streets. It has a greater number of shows than in the parks of Coney Island combined.

The Creation
Opened in 1909

The great naval show of the “Battle of the Monitor and Merrimac,” as produced at Riverview Park the season of 1908, was the sensation of the amusement world, as is also “Creation,” the season of 1909. This production is placed in the park in the largest, most ornate building of its kind erected in any park, exposition, or World’s Fair.

The success and the vast growth of the park, exceeding in extent that of several of our expositions, determined the Company to give it the title of an Exposition, and it is now known and conducted as the Riverview Exposition of Chicago.

The new addition of this year, known as the Lagoon, in which is placed the “Creation” Building, is without question the most beautiful addition yet placed to a park, and is in itself as large as a number of so-called parks and represents a larger investment than most of them.

The West line of the park is the north branch of the Chicago River, now being drained, purilied and dredged, and it will not be long before connection will be made from the north with the channel now being sunk from the harbor at Wilmette.

Boating will soon be one of the great features of this Exposition. The ride from the Loop district to the park cannot fail to be both novel and interesting to the old resident, who remembers when the River was best handled with a shovel. The ride from the park to Evanston and Wilmette will not only prove interesting, but extremely picturesque.

The combination of amusements, grass, shade of trees and what will be soon—a beautiful stream of water—assures the element of permanency and the long continuance of the enterprise.

“White Flyer” Figure 8 Roller Coaster
The “Figure 8” was the first roller coaster at Riverview Sharpshooter Park. The ride has 12 cars on a trough-like track on a timber frame. A steam engine carried the cars up an incline and gravity brought riders back to the starting point. The cars were guided by side-friction wheels and propelled on four swivel casters. The coaster has a few mild four-foot drops on a short track and went six miles an hour. 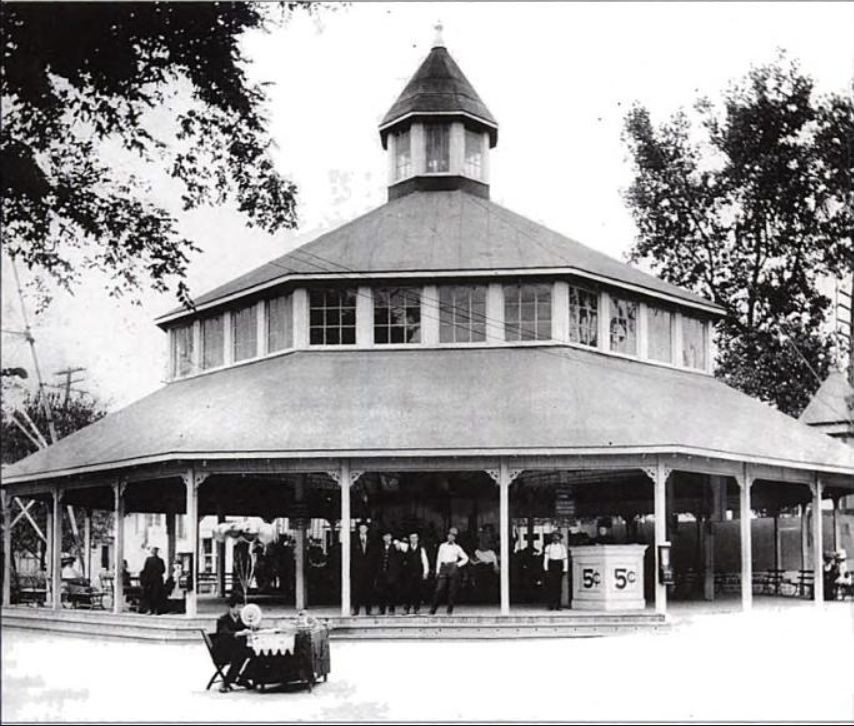 Merry-Go-Round
The Merry-Go-Round was second in popularity to the Figure 8 roller coaster. The “Morris Carousel” was described by the owner as having “very handsome figures in an octagon pavilion 100 feet across and 45 feet feet high.” The cost of a ride was 5 cents. 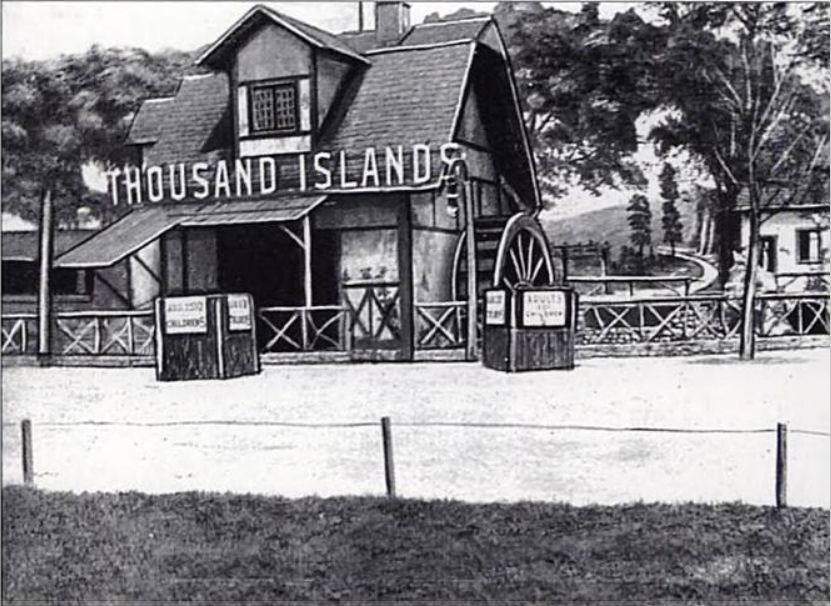 Thousand Islands
The “Thousand Islands” was the third ride in the park when it opened as Riverview Sharpshooter Park. It was composed of 1,000 feet of canals with a 28 foot high chute. The boats passed through the canals at a slow speed, then were brought to the top of the incline where they rapidly descended into a pool of water. The boats returned to the starting point. A large outdoor water wheel operated by a motor, concealed behind scenery, kept the water flowing in the canals. Dark tunnels and scenes to startle the riders were added. The ride was nicknamed Old Mill, Mill on the Floss, Tunnel of Love. and The Mill. For 10 cents, riders could steal a kiss. 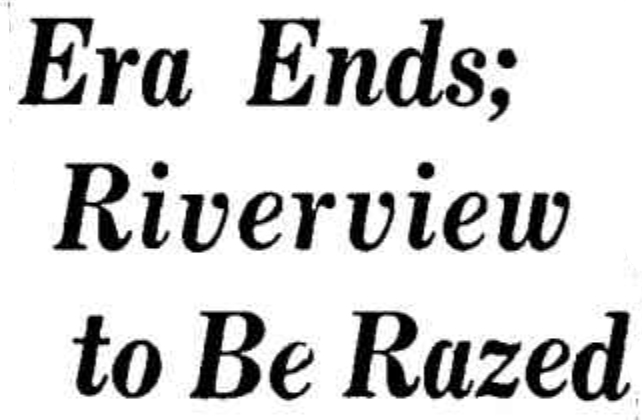 You can’t take your kids to Riverview next summer.

Or any summer. The 63-year- old amusement park at Belmont and Western avenues was sold yesterday and will be torn down, probably to be replaced by industry.

It was purchased by Edgar F. Grimm, an investor of 105 S. La Salle st. and a long-time Chicagoan, who said he was not sorry that he was closing the park.

Start Work in 60 Days
“Where else can you find that much land on the north side?” he asked.

Workman will start tearing down buildings in 60 days. The rides will be dismantled and sold to carnivals or circuses, or anyone who might want a slightly-used roller coaster.

The park was sold to Grimm by George A. Schmidt, grand- son of the original owner, and representatives of the Henry J. Merle family. The price was not disclosed but was estimated to be in excess of 6 million dollars. 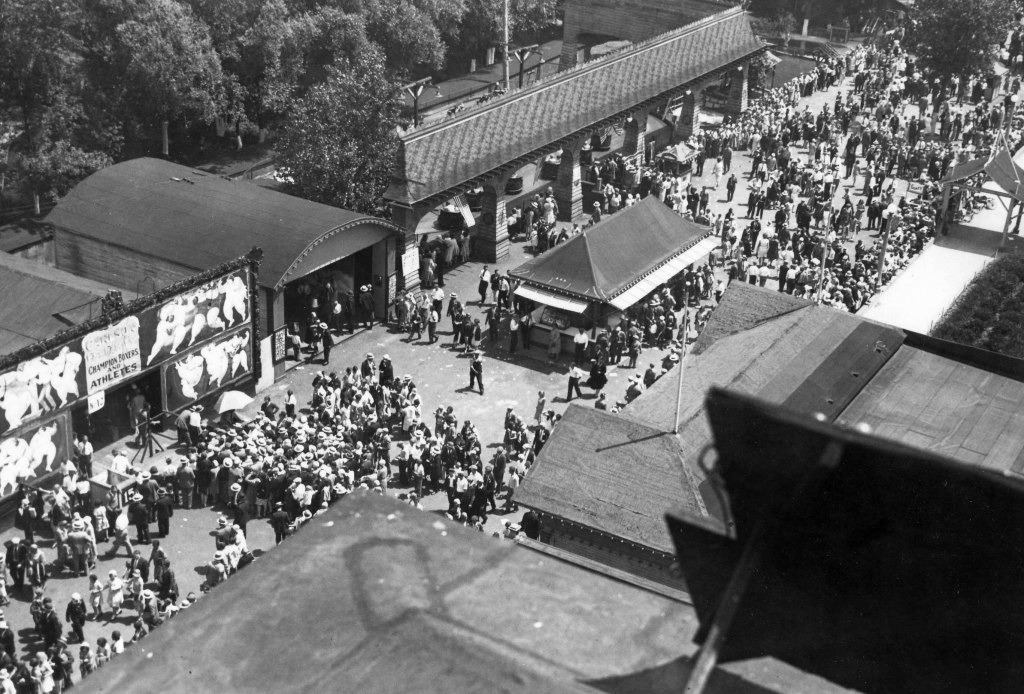 Cites Rising Disorders
Schmidt said that a contributing reason for the sale of the park was the rising problems of violence and disorder. Although police “have done a commendable job” in preventing any major disturbance, the problem was on the increase, Schmidt said. He said the park was showing a profit but operational costs were rising.

Grimm, 60, has been an investor in Chicago since 1929, when he came here after a childhood spent on an Indian reservation in Oklahoma. After a brief stay in Des Moines, he returned to Chicago in 1943 where he was a member of several firms and a partner in Wheelock & Cummins, Inc. He formed his present company in 1961.

Riverview was the last of the big amusement parks which once dotted the city 40 years ago. It was the only one in Chicago since White City, at 63d street and South Park avenue, went out of business in the depression of the 1930s.

For generations it was a part of childhood; its roller coasters and thrill rides a challenge to boyhood pride since the days of knickers. 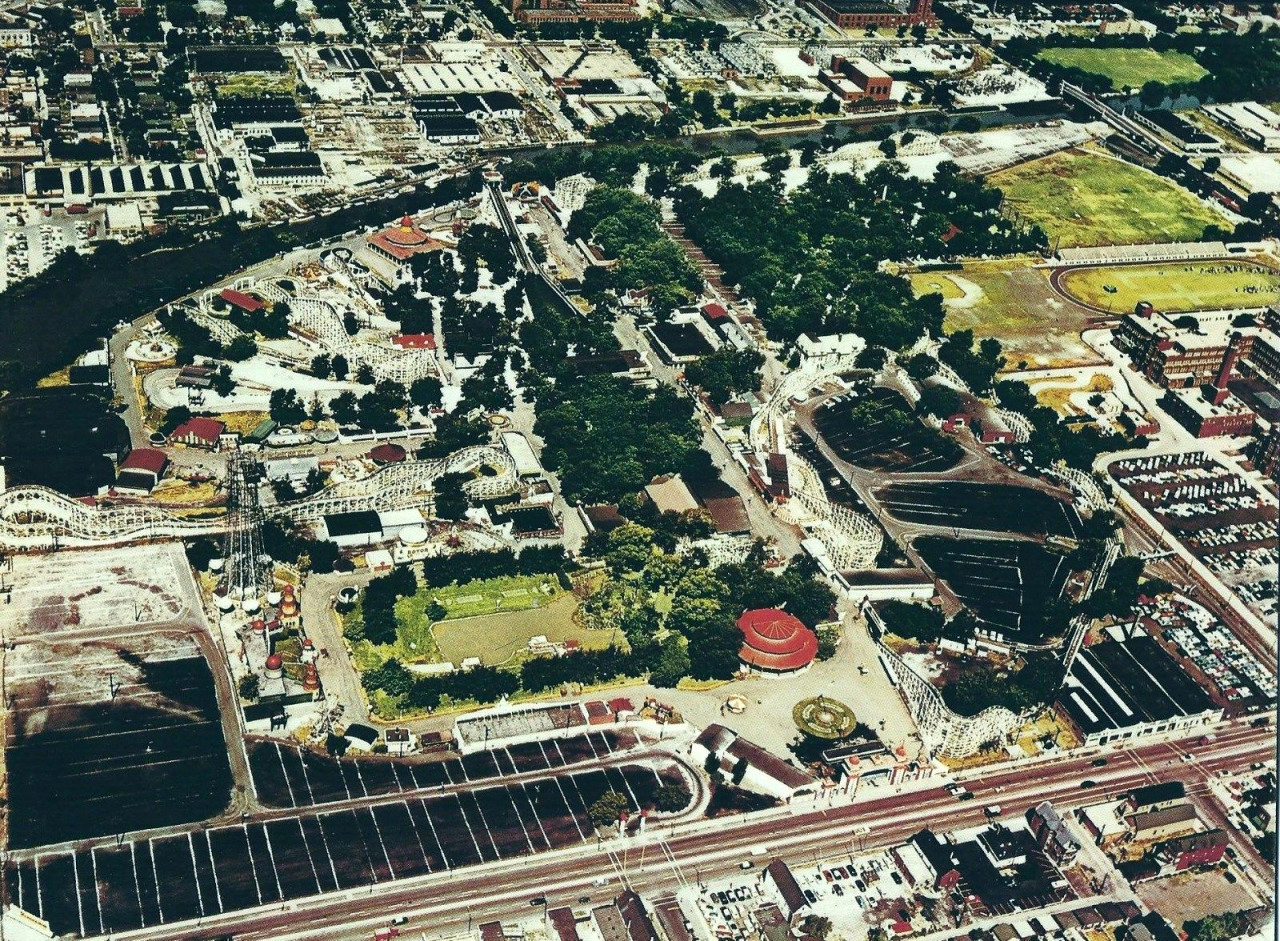 Opened in 1904
The park was opened in 1904 by William Schmidt, who bought the 74 acres along the north branch of the Chicago river from the German Sharpshooter’s club for a few thousand dollars. Schmidt installed three rides: a small roller coaster, carousel, and a shoot- the-chute.

When it closed for the season Sept. 1, it had 120 rides, including six roller coasters, a parachute jump, and rockets. In terms of rides, it was considered the largest amusement park in the world, a fact appreciated by the more than 1.7 million persons who attended the park last season.

Riverview history was much of Chicago’s. In the early 1920s its many gambling games won it fame as “the Monte Carlo of Chicago,” and the wrath of many citizens who complained it “raked in a fortune in dimes from the pockets of laborers, clerks, and factory girls.”

1928 Political Issue
In 1928, it became a political issue when Mayor William Hale (Big Bill) Thompson insisted on closing city schools to take 18,000 children a day on picnics at the park. Despite angry protests from parent-teachers associations, the mayors will prevailed and the excursions continued.

The park was also the scene of Chicago’s only bullfight in 1934. Tho it was a bloodless event, the practice was halted by a judge who accused the Spaniards who ran the show of “bull baiting.”

Other curiosities included a wedding ceremony on roller skates during a roller skating craze, and the controversial appearance of Amazonia, a reportedly former jungle woman who would “shimmy” before spectators for a nickel.

Riverview made news in tragic ways. Without the safety devices and practices of present times, the roller coasters took a heavy toll in the 1920s and 1930s. In July, 1937, 72 persons were injured when one roller coaster train crashed into the rear of another. 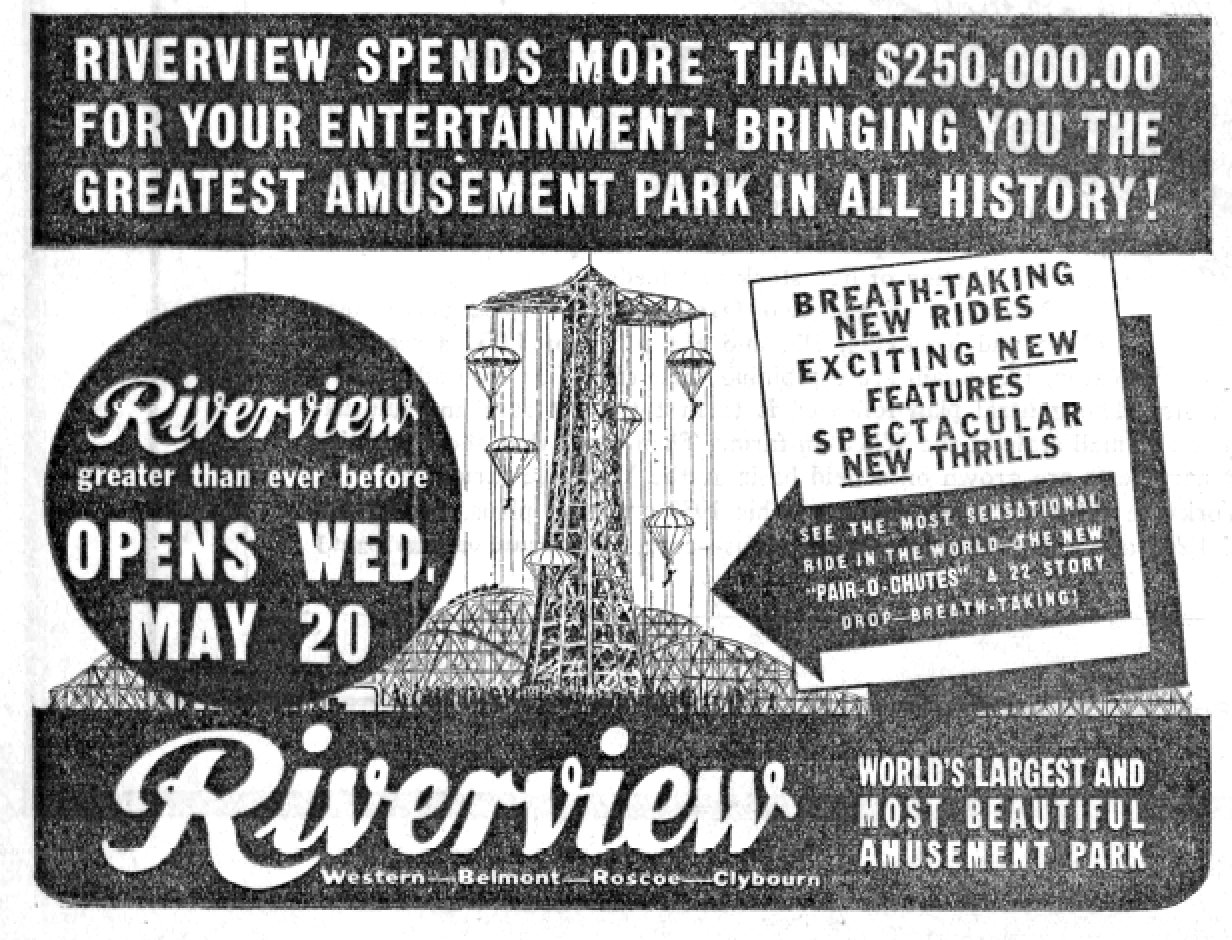