FREE WEST, December 1, 1853-July 19, 1855: Edited by E. Goodman, Hooper Warren, and Zebina Eastman. Although the paper was announced in Western Citizen of October 18 to begin October 25, it did not appear until December 1. The names of the editors are not printed after the issue of October 12, 1854, until November 23, when Z. Eastman is given editor and publisher, E. Goodman and H. Warren associate editors. Their names disappear in the issue of July 12, 1855. The last issue announced that the paper would be merged with the Tribune. Established as the avowed organ of the Freedom Party of Illinois; beginning with the issue of November 23, 1854, the paper carried the statement that “this journal does not profess to be the organ of any party or sect.” It was strongly anti-slavery, however. 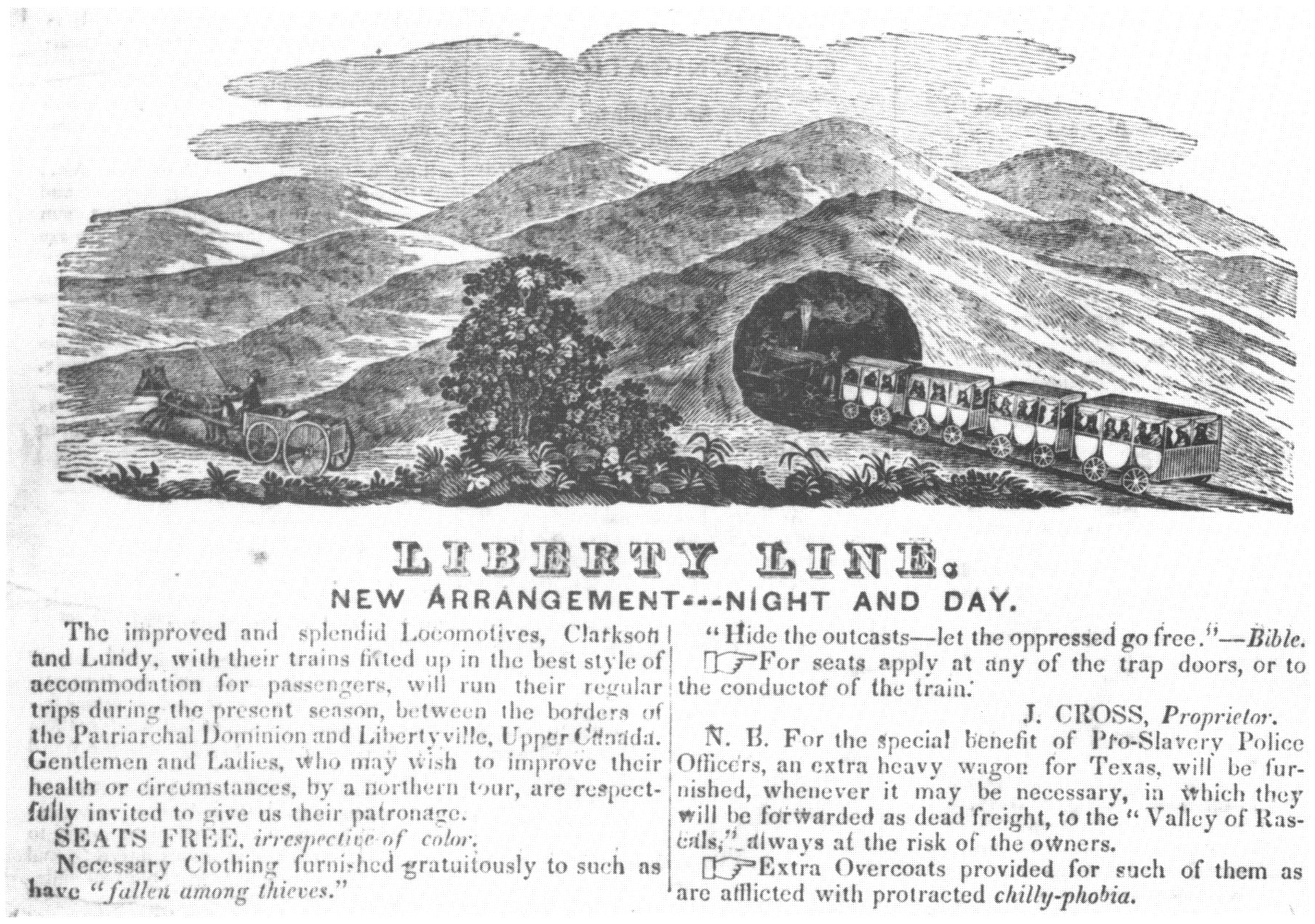 UNDERGROUND RAILROAD NEWS.
The following private letter will be read with interest by the majority of our readers, having been written by one so well known, and to whom so much meriy is due for his labors in the cause of the oppressed:

Dear Friend: Your letter dated Hamilton, C.W., 28th ultimo, came to hand yesterday. Since then, four others have been received from fugitives in Canada, in conditions similar to your own. “I want you to write me, and let me know how things are going on,” respecting the Underground Railroad; it is a prominent request amongst many others, which comes to me almost daily from those who have escaped the “prison-house of bondage.” These kind letters I am always pleased to receive and read, with the deepest interest; though really I am often at a great loss to find time to answer all that is required of me. As far as circumstances will allow, however, I make it a point to write promptly, and as satisfactorily as possible.

Dozens have passed on the Underground road during the brief interval since your exit; and, with but rare exceptions, they have been of the most valuable, able-bodied, intelligent, and brave of their class. Indeed, if the narratives of some two or three, to whom I allude, could be made public, I am persuaded that their adventures would appear far more extraordinary and thrilling, than any which have ever come under my notice, not excepting the noted Henry Box Brown, or the celebrated William and Ellen Craf, and others.

Chicago Conductors1
The greatest strength of Chicago’s Underground Railroad resided in its committed black population. It organized to thwart all attempts to capture or kidnap a fugitive. On September 30, 1850, many black Chicagoans met at the Quinn Chapel African Methodist Church on Wells Street to plan their actions in case attempts would be made to arrest fugitives. The purpose of these committee members was to be on the lookout for slavecatchers. According to a local newspaper, as a result of the meeting, they organized a black police force, the Liberty Association Vigilance Committee, consisting of seven divisions that regularly patrolled the city.

Dr. Charles V. Dyer, president of the Chicago, Burlington and Quincy Railroad, maintained a large boarding house in Chicago where fugitives received meals and were sent to the homes of free blacks who lived in the city. Black barber Louis Isbell, whose business was in a popular hotel, used his perfectly located shop to assist fugitives. Reverend Richard DeBaptiste, the brother of noted Detroit conductor, George DeBaptiste, often collaborated with his brother, who owned boats, in helping fugitives reach Canada. If in danger from slave catchers, fugitives could easily hide within Chicago’s black community.

Philo Carpenter, Chicago’s first pharmacist and one of the founding members of the Presbyterian Church there, was a very active member of the Underground Railroad and helped about 200 fugitives escape to Canada. One should remember that opposition to slavery was a religious issue before it became a political one. In 1851, Carpenter and the majority of the Third Presbyterian Church voted to abstain from participating in the meetings of the regional Presbytery because they believed that the church failed to discipline those guilty of holding their fellow man in bondage. When the Presbytery of Chicago removed them, they founded the First Congregational Church of Chicago. 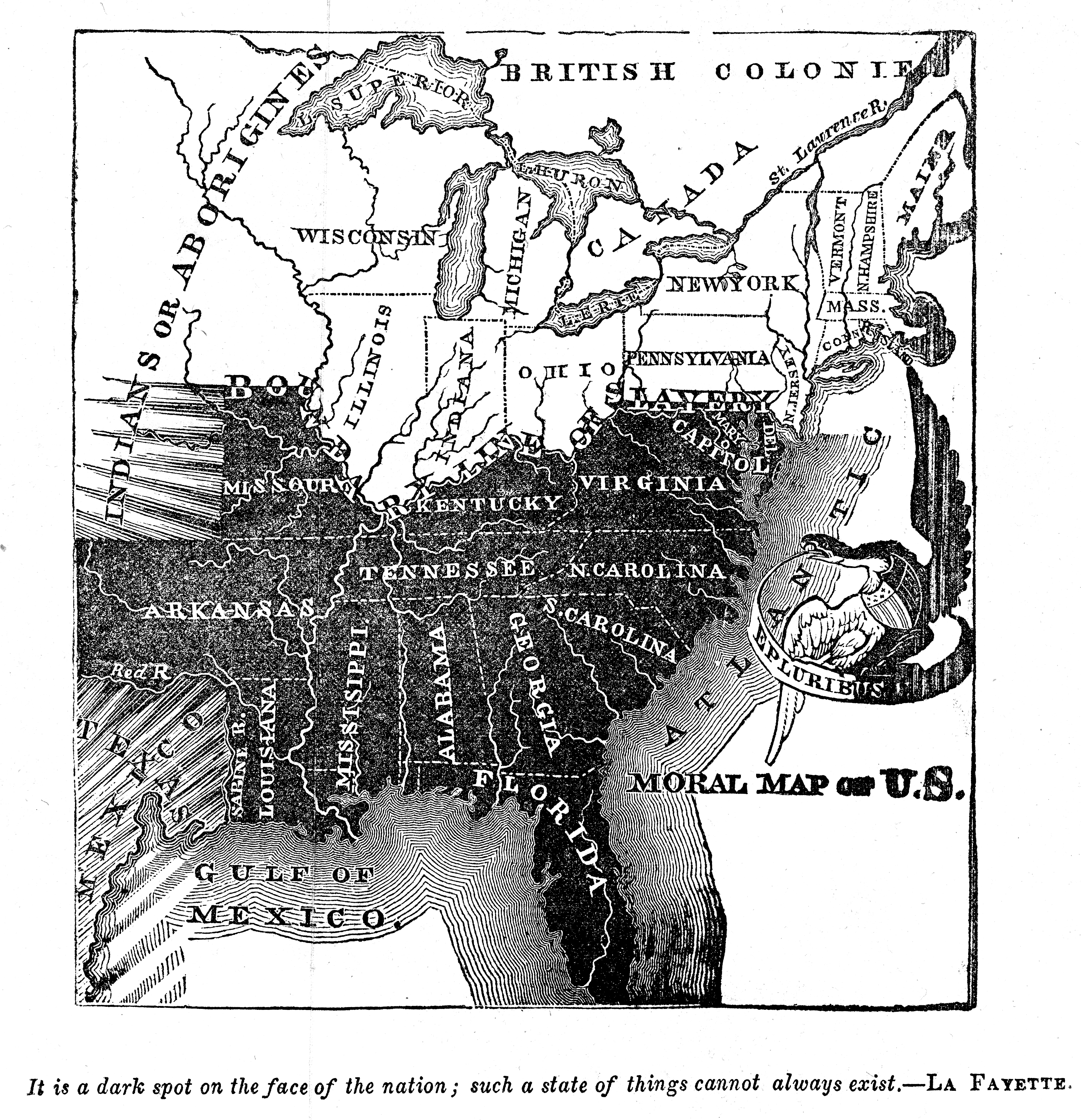 This anti-slavery map shows the slave states in black, with black-and-white shading representing the threatened spread of slavery into Texas and the western territories.

Places of the Underground Railroad, 1913

The chief points of entrance were Chester, Alton, and Quincy. The tracing of continuous routes from these starting points is a matter of guesswork unless evidence could be gained at each station of its cooperation with the next station. But given the three chief points of entrance, the general direction north- east, and individual stations, with some evidence of cooperation in certain localities, one can form an opinion of three general pathways followed by the fugitive. Using Siebert’s map with evidence gained from other sources, one sees that it is probable that one pathway from Chester led to Sparta, about twenty miles northeast, thence to Centralia and from there north, possibly through the friendly territory of

Will County to Chicago ; the second, from Alton, northeast to Jacksonville, then
through the vicinity of La Salle and Ottawa to Chicago^ and third, from Quincy,
through the neighborhoods of Mendon, Fannington, Galesburg, Princeton, La Salle and
16 ending at the terminus, Chicago

Chicago was the great terminus, the point where most of the lines con- verged. Here the slave was virtually safe, for he was not only assured of pro- tection from white people, but the negro element was strong enough to prevent his capture,^ The colored population did not hesitate to resist officers of the law and slaveholders. The Western Citizen of November, 1850, tells of a slaveholder
who, after taking his property, was overtaken five miles out of the city by the negroes. The slave was rescued by them and sent off to Canada^* V/hen attempts were made by the people to rescue a fugitive the colored people always formed part of the mob^. The city proved to be an unpleasant place for the slaveholder or
slave-catcher,aswasevidentin1857» whenSamuelThompsoncametoChicagowitha
negro boy who was not a slave. It was rumored about that the boy was a slave and
that Thompson was taking him back to bondage. A large crowd gathered about hie
lodging house and threatened violence. Although an officer, after an interview
with Thompson, aesured the people that all was right, the crowd was not quieted,
and the man under suspicion was forced to submit to imprisonment in order to escape
20
violence . The realization of the attitude of Chicago by Southerners is aptly
expressed by the Cairo Weekly Times’ . ‘They are undoubtedly the most riotous people in this State. Say nigger and slave -catcher in the same breath and they are up in arms Hh 21

As editors of the Western Citizen. Zebina Eastman and Hooper Warren were champions of the fugitive, giving the Underground Railroad process some appearance
of organization by means of engendering the spirit of cooperation. The exchange of information concerning the activity of the Underground Railroad by the Chicago papers and the papers of the whole state enabled readers to see that their effort
to aid a slave was but one step in a continuous process. Eastman’s association with anti-slavery journalism did not begin with the Western Citizen, . In Vermont he established the Free Press. After he came west he worked first on the Peoria Register nd finally with Hooper Warren, who also had had much previous experience, began the
publications of the Genius of Liberty. In 1842, at the invitation of some prominent abolitionists, one of whom was Philo Carpenter, they moved the paper to Chicago, where it was issued under the name Western Citizen , later changed to the Free West .

From the material examined, one finds only evidence of the use of the
1
Illinois Central and Michigan Central Railroads. “* The Western Citizen reported in
14 1859 » which is a safe date, that two negroes had arrived on the Illinois Central.
Cairo, however, denied that the Railroad was a means of escape, having in mind that its management had been accused of complicity in the Underground Railroad. The City Times said, “The Illinois Central is no Underground Railroad affair and has no Underground Railroad connections.M^ This may have been true that it was not a part of the process, consciously, but nevertheless slaves in disguise may have
managed to travel without being arrested. As early as 1854, fifteen fugitives from 16
Missouri were shipped off from Chicago to Canada on the Michigan Central Railroad.

From the material examined, one finds only evidence of the use of the 1 Illinois Central and Michigan Central Railroads. “* The Western Citizen reported in 14 1859 » which is a safe date, that two negroes had arrived on the Illinois Central. Cairo, however, denied that the Railroad was a means of escape, having in mind that its management had been accused of complicity in the Underground Railroad. The

City Times said, “The Illinois Central is no Underground Railroad affair and has no Underground Railroad connections. M This may have been true that it was not a part of the process, consciously, but nevertheless slaves in disguise may have managed to travel without being arrested. As early as 1854, fifteen fugitives from 16 Missouri were shipped off from Chicago to Canada on the Michigan Central Railroad.

Many escaped slaves were helped through Chicago by the assistance of Isbell and other men such as Philo Carpenter – Chicago’s first pharmacist – and the famed Allen
Pinkerton. While working on the Underground Railroad, Isbell was shot at four times.

Isbell recollected in an interview, a U.S. Marshal came to his Sherman House barbershop one morning in 1857 and stated he was about to arrest two fugitive slaves from Missouri on behalf of their owners named Bagsby and Calevert.

Lewis was quoted in the interview, “When Marshall Roper summoned me to help make the arrest that afternoon the slaves had escaped. I had taken them with a dozen other big, stout Negroes to a deserted old house a short distance away.”

Afterward Isbell arranged a trouncing for Bagsby and Calevert and got the police to turn a blind eye.

Bagsby drew a revolver and fired four shots at Isbell during the fight. Babgsy did not kill Isbell that day

but vowed to if he ever saw him again. The two did cross paths one more time in Kansas City. Bagsby, instead killing Isbell, took him to dinner.

When Lincoln emancipated the slaves during the Civil War, Lewis Isbell took on a new role. Lincoln commissioned Isbell a colonel in the Union Army and with an assignment as a general recruiting officer.