The southwest corner of Jackson boulevard and State street will soon be improved with a fine modern, up to date structure, to be erected for Maurice L. Rothschild from plans prepared by Holabird & Roche. The enterprise deserves more tha a passing mention.

The building at present will be but seven stories high above the sidewalk, with a basement and subbasement, but the structural steel is designed to admit a skyscraper, which will in the near future rise to the sky line of the highest State street building. The finest material procurable, selected for durability, as well as appearance, will be used. 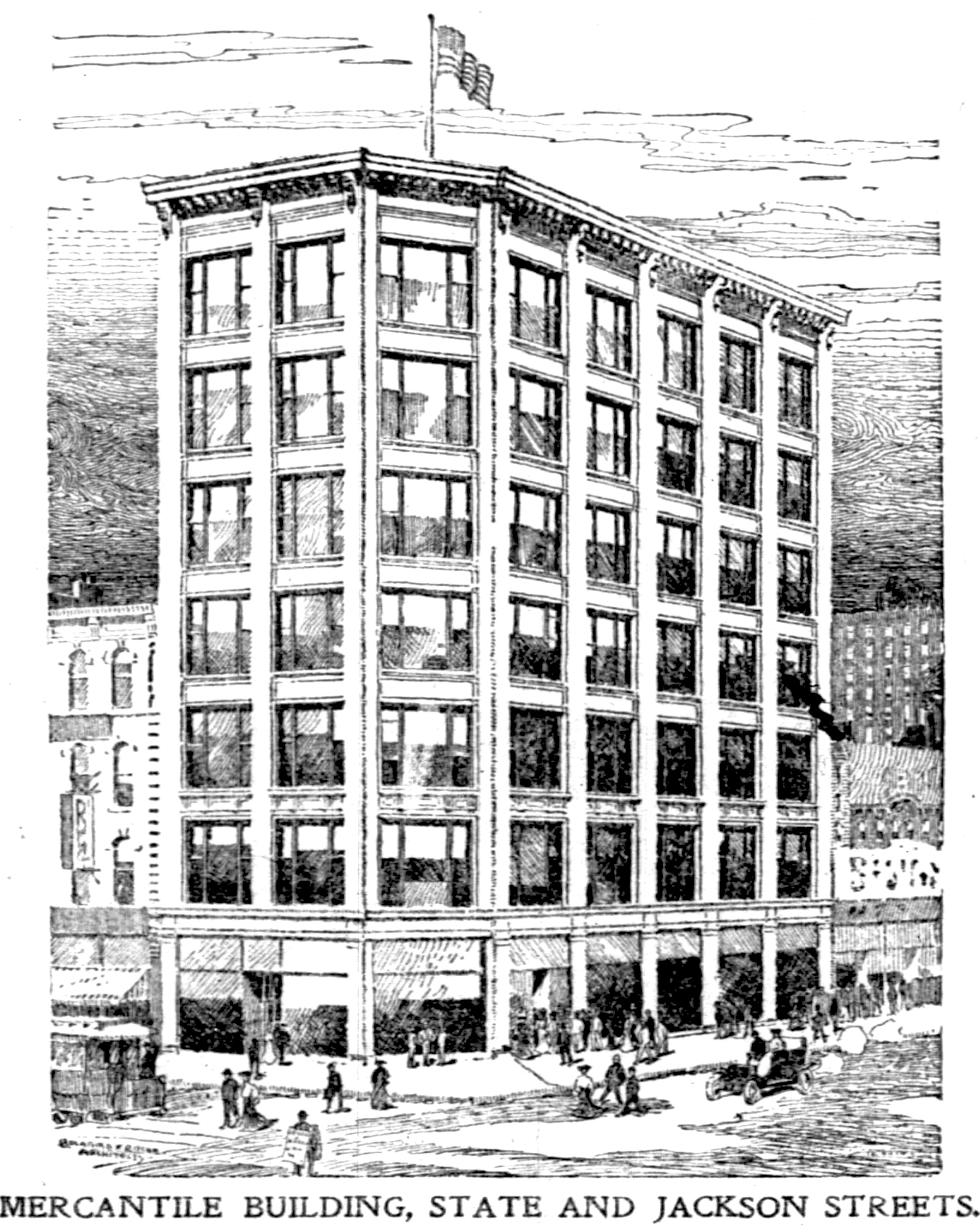 The Rothschild building will have handsome entrances on State street and Jackson boulevard; the corner being cut off to give a large show window. Granite pilasters and piers, on a granite base, will support rich ornamental entablature and cornice of the modernized Tuscan order, slightly French in detail, givibg such effect as one would expect to find in a Paris or New York store building. From the second story up to the rich cornice with its supporting French consoles a mat glaze white terra cotta will be the material used to express the architecture.

As frequently used in Chicago buildings (and now generally acknowledged as the true expression of the skeleton building’s structural being) tall vertical piers will rise to the cornice itself. Inside the building, on the first floor, is a handsome, well appointed light store, with a floor of encaustic tiles and a beamed ceiling, formed into four large panels. Two large elevators and ample stairs run to the various floors of the building. In the equipment every device and fitting known to be the latest and best will be used. The upper floors will be as well finished as the first floor.

The owner is determined to have a building second to none of its kind. For this reason it has been decided to avoid the usual effect seeming to support the building on plate glass—a style of construction which will soon be obsolete. But two or three buildings of recent construction have adopted the more substantial style of architecture, yet it must be apparent that no matter what be spent above the first story of a building, if it has the appearance of being unsupported, it lacks dignity, and is cheapened in appearance.

That good architecture has, even commercially, a value returnable in dollars and cents, is now recognized by such shrewd business men as John Wannamake, as exemplified in his New York and Philadelphia stores, and by Marshall Field and others in Chicago, and in the contemplated new Boston store, which will have supporting piers and architectural refinements not thought necessary a few years ago. 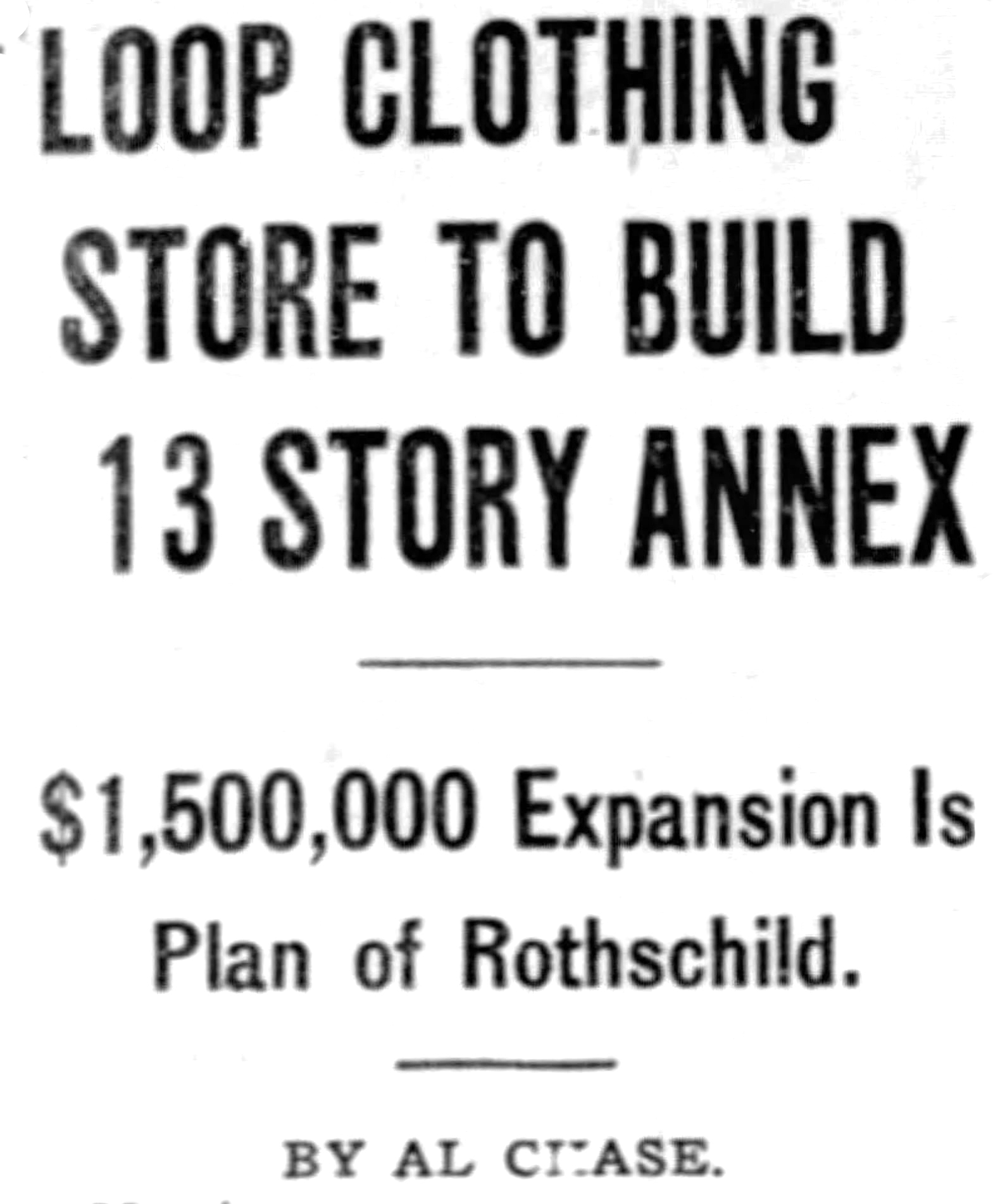 Maurice L. Rothschild, owner of large clothing houses in Chicago, Minneapolis and St. Paul, yesterday announced plans for a $1,500,000 expansion of the store at the south west corner of State and Jackson. Four more floors are to be added to the none story building now standing and a thirteenth story annex is to be erected just south of and adjoining it on land purchased from the Chicago Title and Trust company, trustee for Henry P. Isham and others.

Although David Mayer Jr., vice president and general manager of Maurice L. Rothschild, Inc., would not disclose the price of the twenty-three feet frontage just bought, it os known that the property by the Bedford Shirt company calling for $24,000 net annually has just been cancelled. A rough estimate would show that in the neighborhood of $22,000 a front foot was paid for the lot.

We’ve always believed the loop to be the best place for a store, despite the talk of decentralization and the establishment of suburban branches by downtown stores. Since we opened our Chicago store twenty-three years ago every year’s business has shown a substantial increase over that of the previous one.

Start Work in May.
The property just bought, through Albert H. Wetten & Co., is improved with an old four story building on which leases run till next May. Work will then start on the new additions to the Rothschild store. Holabird & Roche designed the original store and Holabird & Roche probably will be architects of the latest additions.

Maurice L. Rothschild, who resides at the Drake, started in business in a one story store in Seneca, Kas., in 1885. Within a couple of years he established a store in Minneapolis. Later he opened a store in St. Paul and then one in Chicago in 1906. 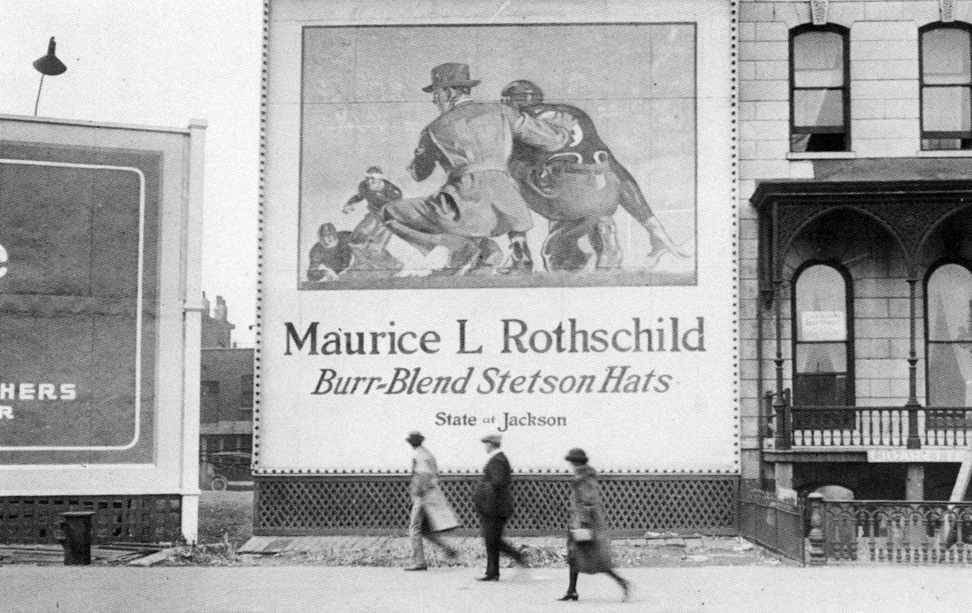 The Maurice L. Rothschild & Co. clothing store on State Street will be closed within a month or two as the first action to be taken by the nine-store Chicago chain.

Botany said the 10 stores were sold for cash but terms were not disclosed.

The eight-story Rothschild building at 304 S, State St. at one time contained one of the biggest stores in the Loop. It has, however, been cut back to four selling floors from six. There was no immediate indication of the use to which the State Street store would be put.

Rothschilds said it is leaving the Loop “to concentrate on and channel our efforts to other Rothschild stores.”

Starting about March 1, the space will be operated jointly as The State Street Store with the men’s furnishings on the first floor and the women’s and children’s apparel on the second and third floors.

Tho Permut is head of Erie Clothing Co., a spokesman for the firm said Erie does not have an interest in The State Street Store. Harold Fine, attorney for Associated Retail Stores, said the fourth floor will be leased at a related commercial operation, perhaps a shoe store.

Meanwhile, officials of John Marshall Law School are planning to sign a lease for the fifth, sixth, and seventh floors of the building. Noble W. Lee, dean, said the three floors would be linked with the school at 315 S. Plymouth Ct. by a pedestrian bridge. If the law school leases the space, it will be able to vacate the building at 321 S. Plymouth Ct. and put up a new 10-story building there, he said.

The building has been vacant since last year when the Maurice L. Rothschild store was closed. Rothschild was purchased by Erie Clothing from Botany Industries in November, 1971. 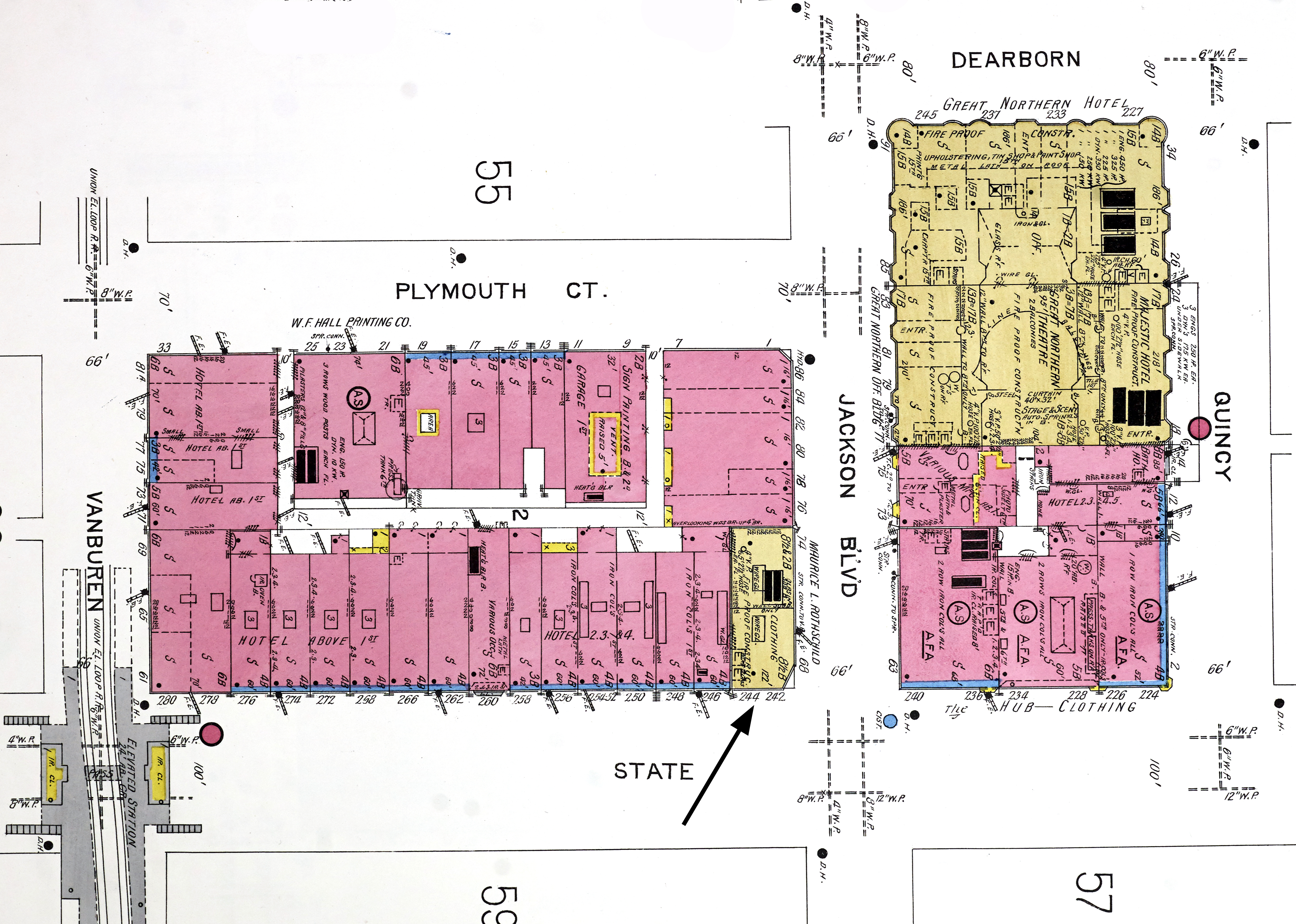 In 1895, another Rothschild, Abraham M. Rothschild, opened a store on the corner at State and Van Buren streets. Unfortunately, on July 28, 1902, Mr. Rothschild committed suicide at his home on Michigan avenue by shooting; troubles which led to losing control of his business believed to have caused temporary insanity. Maurice L. Rothschild married his widow, Gusta Morris, the daughter of Nelson Morris, the millionaire packer, in 1905. 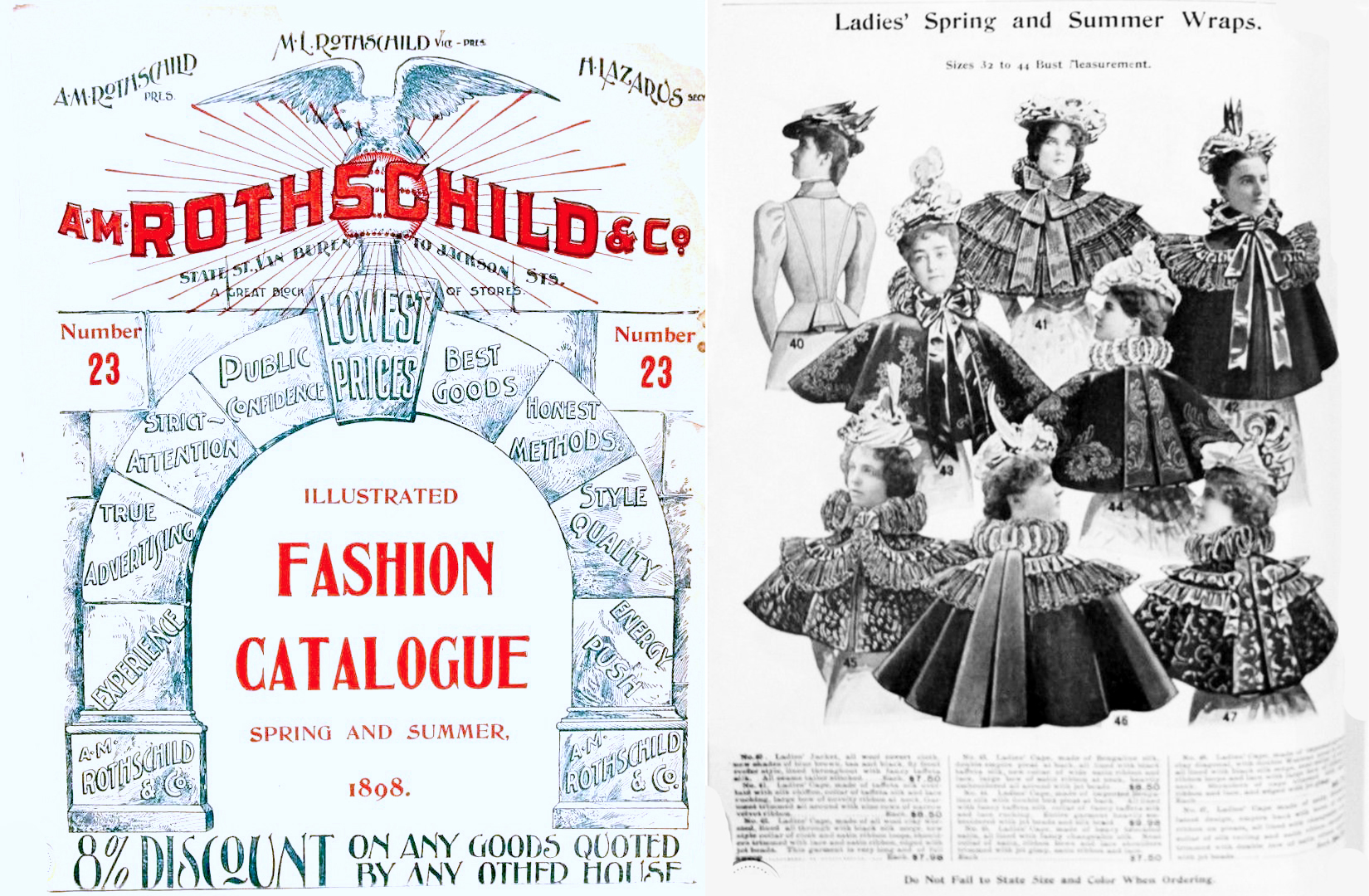