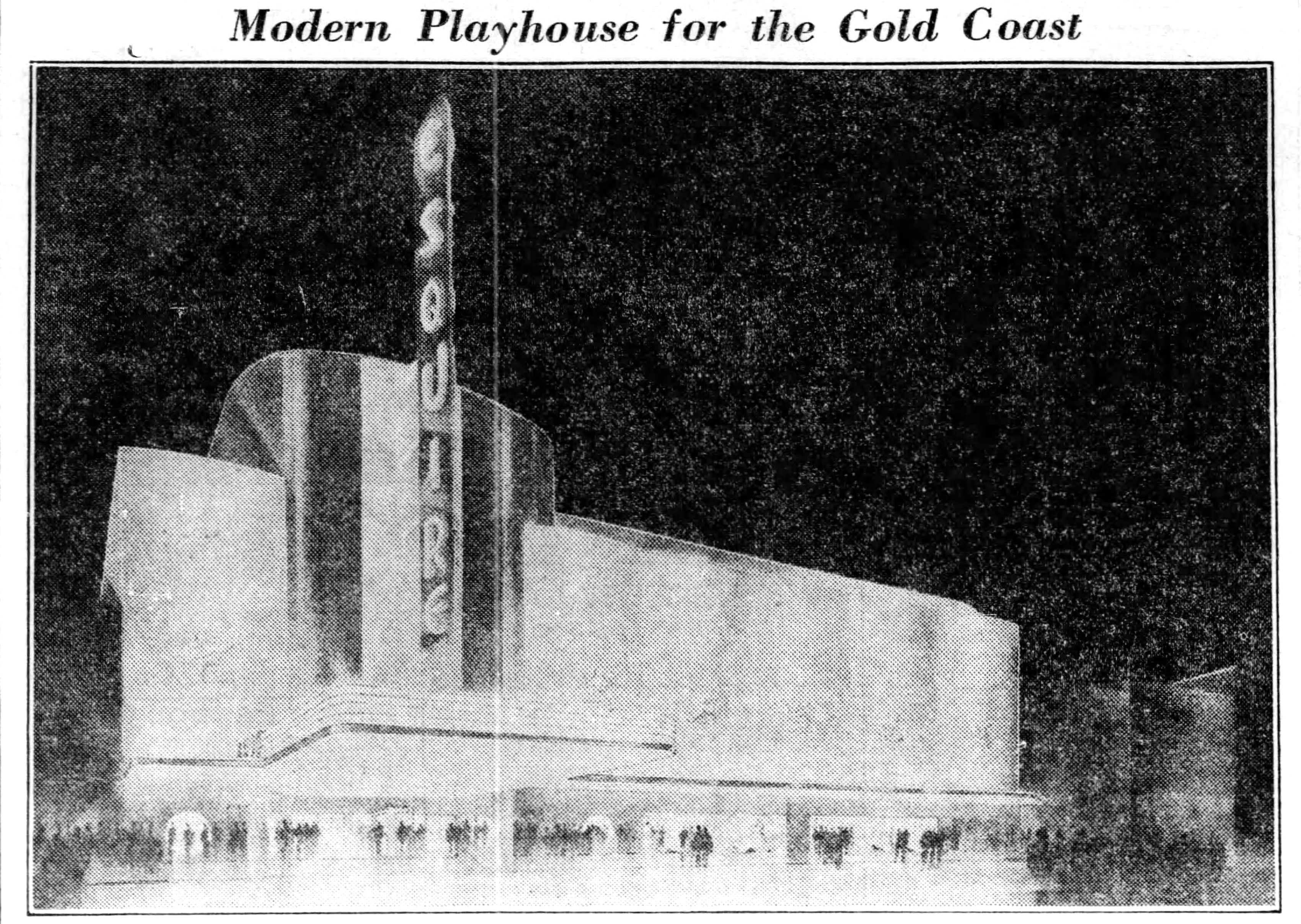 Work will begin within sixty days on the above Esquire theater at 56-68 East Oak street, between Michigan avenue and Rush street, according to the Harry and Elmer Balaban corporation, owners. Designed by Pereira & Pereira, this 1,600 seat cinema will have unusual features. The lobbies and foyers will be below the auditorium, which, will be divided into three levels. The lounge rooms will have a snack bar for soft drinks, sandwiches, etc. Mounted on the convex surfaces of the exterior will be sculptured figures by a local artist. B. B. Buchanan is theater consultant on this project. The 12-x100 site was bought from Fred Becklenberg. The H. & E. corporation owns and operates the Dearborn, Windsor, Commercial, Pickwick, Ridge, Des Plaines, E. A. R., Rose and Joy theaters. 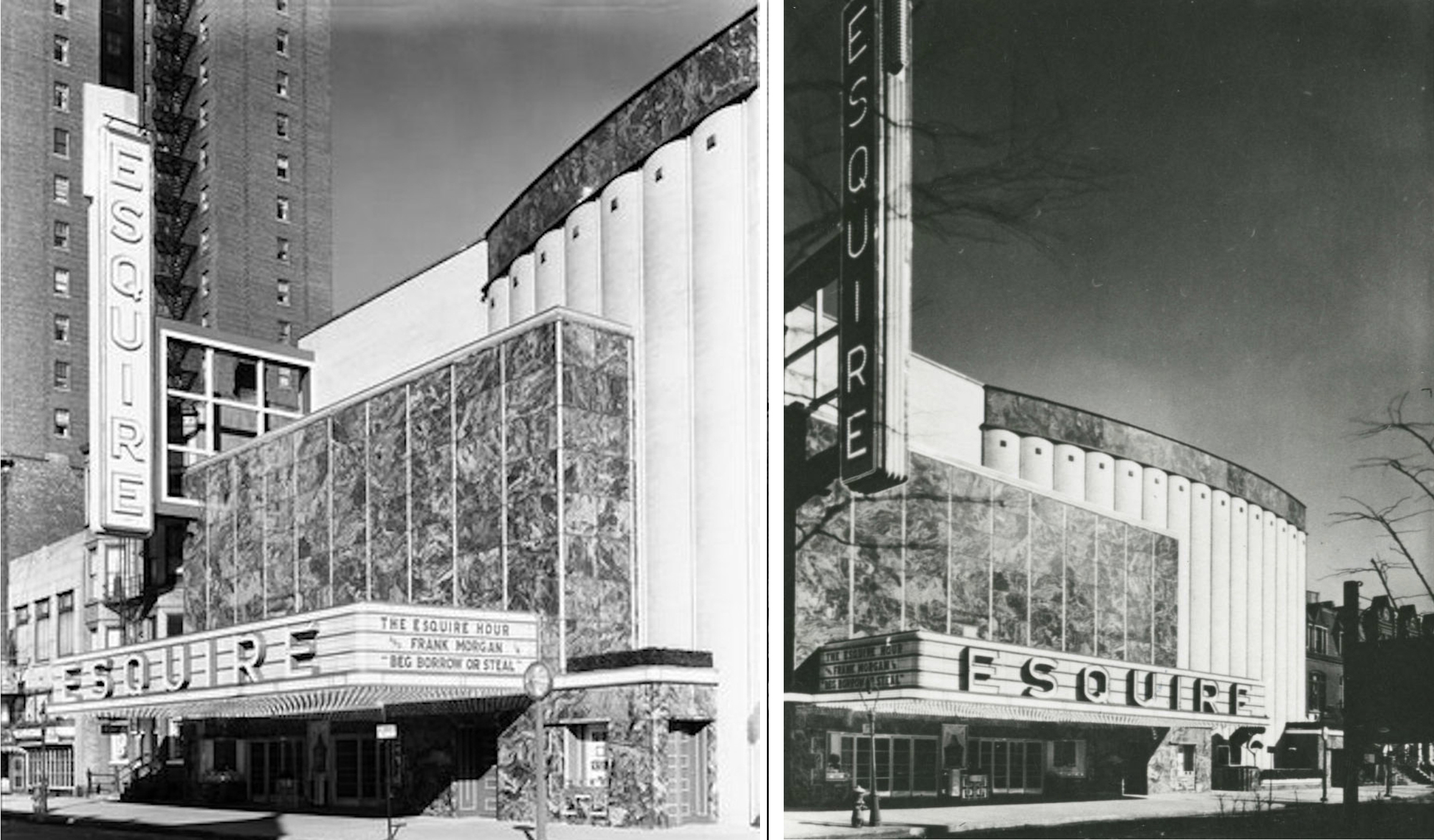 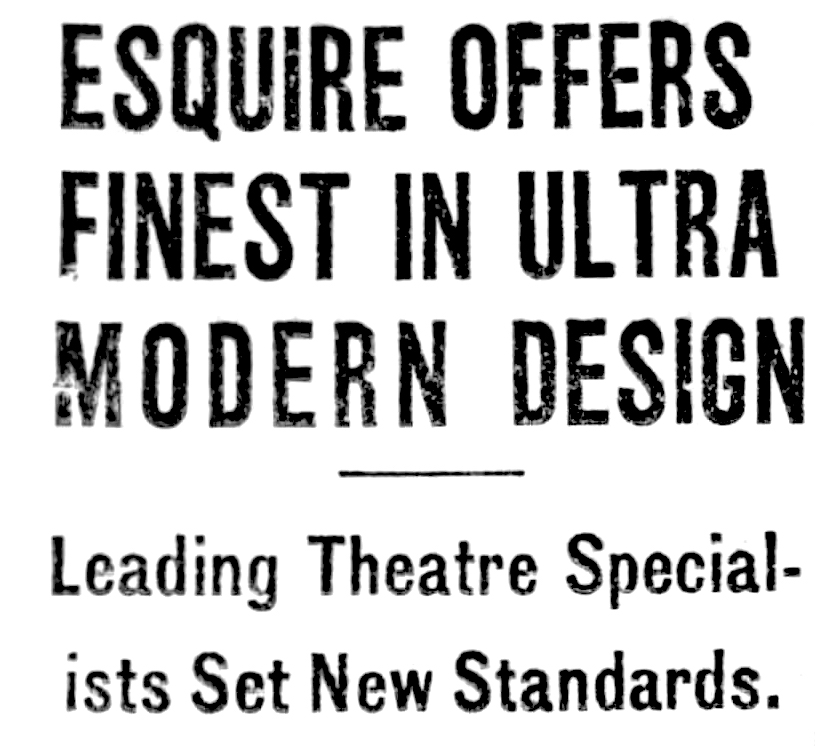 Scouring the country for appropriate lumber and millwork, the Hartman-Sanders company has put into the Esquire the finest domestic and imported woods. With all interior trims of mahogany and other millwork the finest obtainable, they have admirably lived up to their reputation of Chicago’s outstanding quality lumber dealers.

Designed by the Bigelow-Sanfors Carpet company, world’s largest manufacturers of carpeting, the floor coverings in the new theatre set a new standard of excellence. With design completely eliminated, and the colors of the carpets themselves lending tone to the theatre, Bigelow-Sanford offered a new mode in theatre floor coverings. Deep, luxurious and long wearing, produced in this country by the finest domestic weavers, the carpeting is different than any ever installed in a theatre,

The contract was handles through Thomas Maddock & Co., one of Chicago’s largest carpet contractors, and the leading theatre specialist in carpets for many years. It was Mr. Maddock, himself, who personally supervised the job and offered many valuable suggestions in the carpeting layout. Constructed in wide pieces and with the seams completely eliminated, the entire lobby carpet was put down in one piece, in itself a Herculean task.

Hardware Specially Designed.
The radically new and distinctive building hardware in the theatre was supplied by the I. W. Kent company, 238 N. La Salle street. Featuring chrome and stainless steel, the hardware was specially designed to meet the strict requirements of the architects, including door pulls, locks, knobs, and many other details.

The new type and color silhouette letters on the canopy were created by Ben Adler of the Ben Adler Sign company. For the first time in a theatre, maroon is used for the background color of the letters rather than the conventional blue or black. In addition special glass, imported from Czechoslovakia is used for the background for the letters. These letters are another of the many details about the theatre that were especially designed for the Esquire. Even the racks from which the letters hang are a complete new departure from former theatre practice. 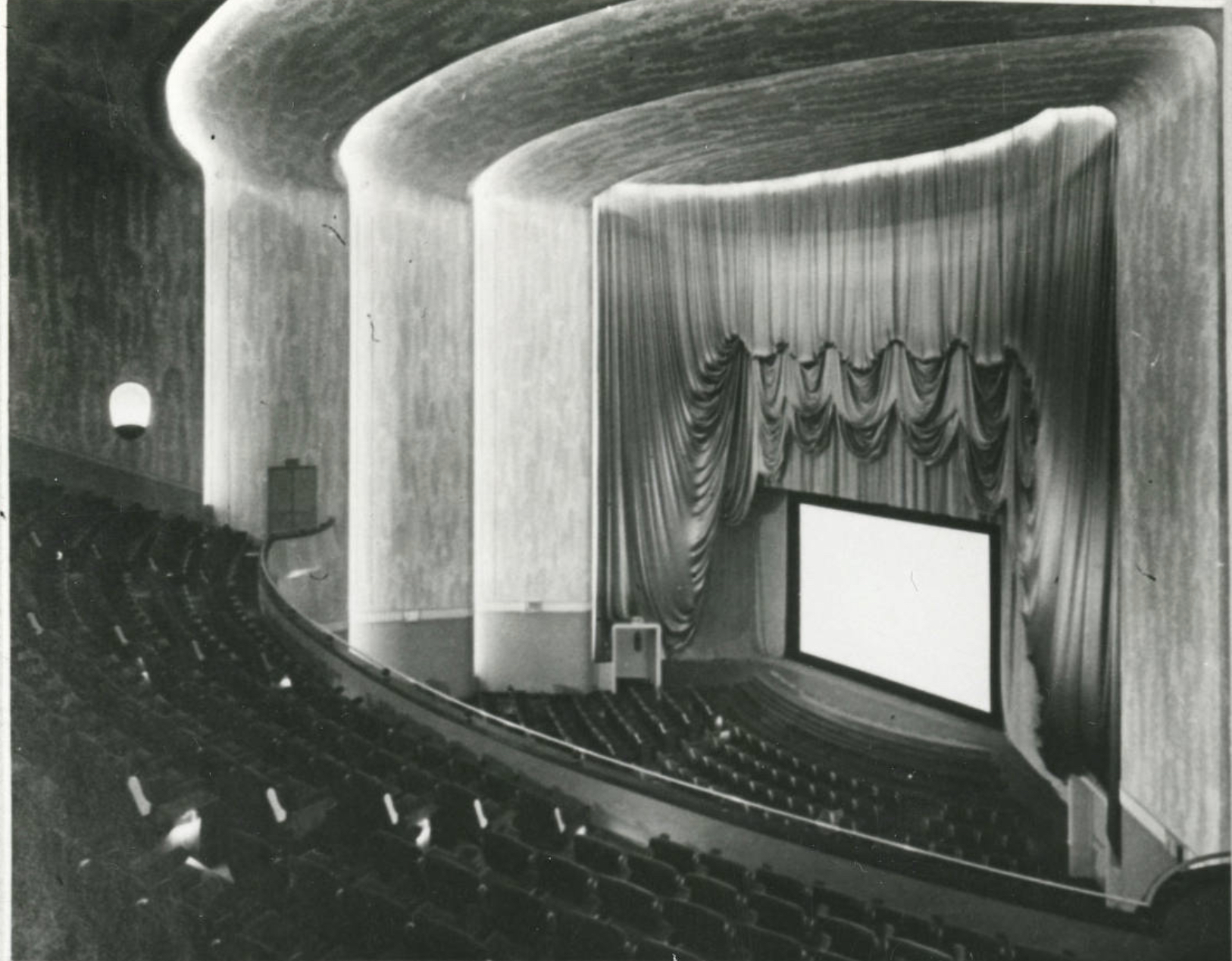 Enjoy New Lighting.
Lighting fixtures in and about the theatre were made by the Lee Pereira company, 106 E. Hubbard street, and as was the case with so many other details in the theatre, were specially designed for the Esquire.

All furniture in the Esquire was supplied by Davidson’s, Inc., 412 Orleans street, wholesale furniture dealers. Here again, newly designed effects were instituted. With the rough details supplied by the architects, Pereira & Pereira. Davidson’s, Inc., worked out lobby, studio room, and miscellaneous furniture that harmonized with the essential movement of the theatre. Using leathers and rare tapestries, they have created furniture which, while modern in treatment, retains all of the many comforts of period furniture.

No Drafts.
Duct work for the new amazing no draft ventilation was built and installed by the Advance Heating and Air Conditioning company, 117 N. Des Plaines street. Completely solving the modern theatre’s problem of drafts when combined with adequate air delivery, they have built a system that is a marvel of efficiency. All drafts are eliminated and the air is delivered to the auditorium in a smooth flow, gently dropping from concealed ducts in the roofs and walls. Braced completely to do away with all vibration, these ducts are a permanent part of the structure.

The work in the Esquire , necessary because of the complet fireproof construction was built by the Ravenswood Tile company, 16 W. Kinzie street.

As in the case with the majority of other theatres, the Esquire money will be handles by Brinks, Inc., 571 W. Jackson boulevard, oldest money transportation service in the country. Brinks was the natural choice when this type of service was considered.

Perfect Projection.
The new projection equipment in the Esquire theatre, embodying all of the latest features of modern motion picture presentation, was installed by Joe Goldberg, Inc. From ultra high intensity lamops to new screen, the equipment was graded up to the strict Esquire standard.

Other contractors and vendors on the Esquire theatre include The American Radiator company, whose new type of vacuum cleaners will be used, Photoplay Advertising company, 823 S. Wabash avenue, leading poster purveyors to the motion picture theatres of Chicago, and the Film Chauffeurs and Carriers Union, the ever reliable film carriers. Here, in the last named company, is a little seen, but all important cog in Chicago’s theatres. Working at night, they pick up the film at the end of its run, return it to the exchanges and the same night bring out the pictures for the next day’s showing.

Towel service within the theatre will be supplied by the Individual Towel Service, 3230 S. St. Lawrence avenue. 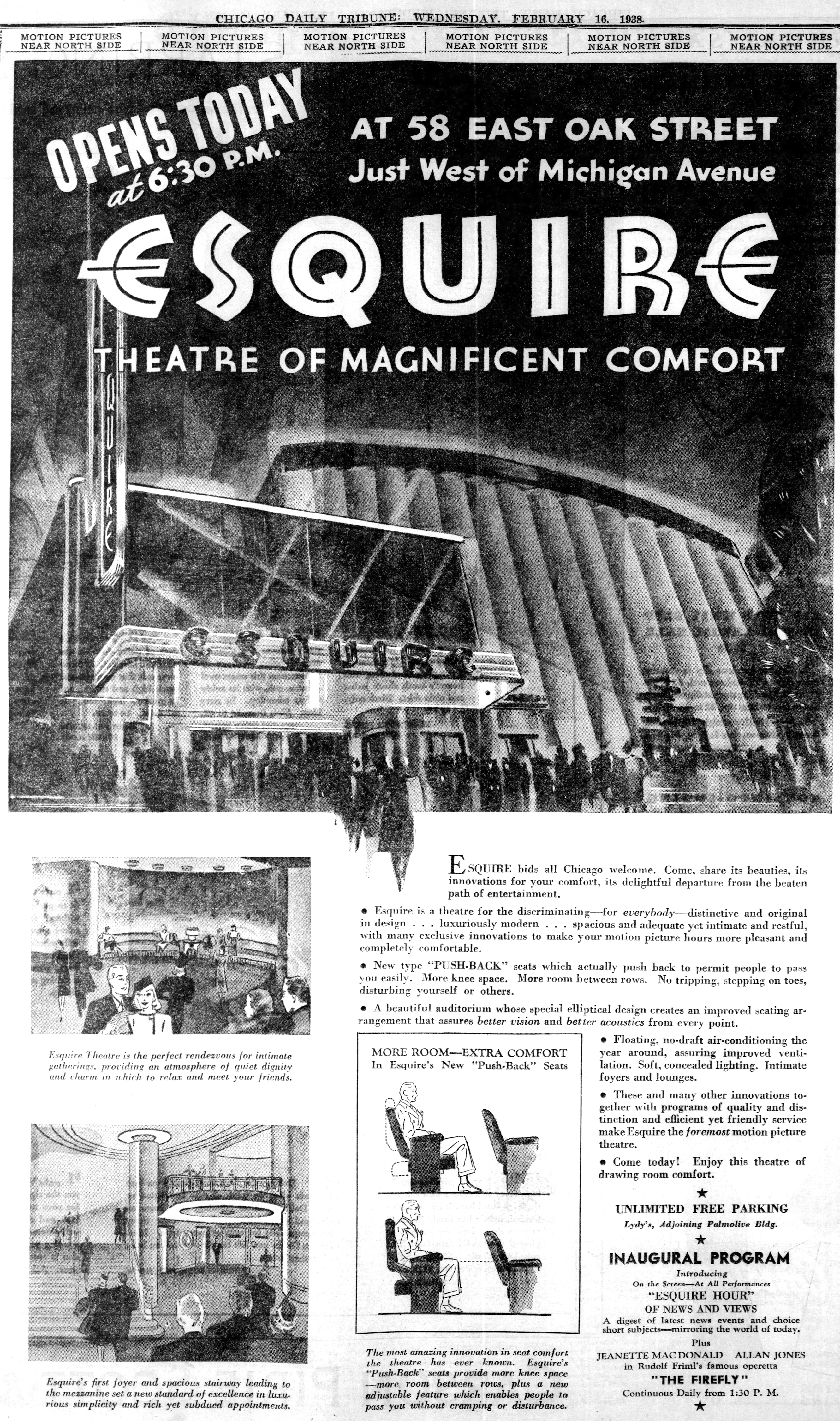 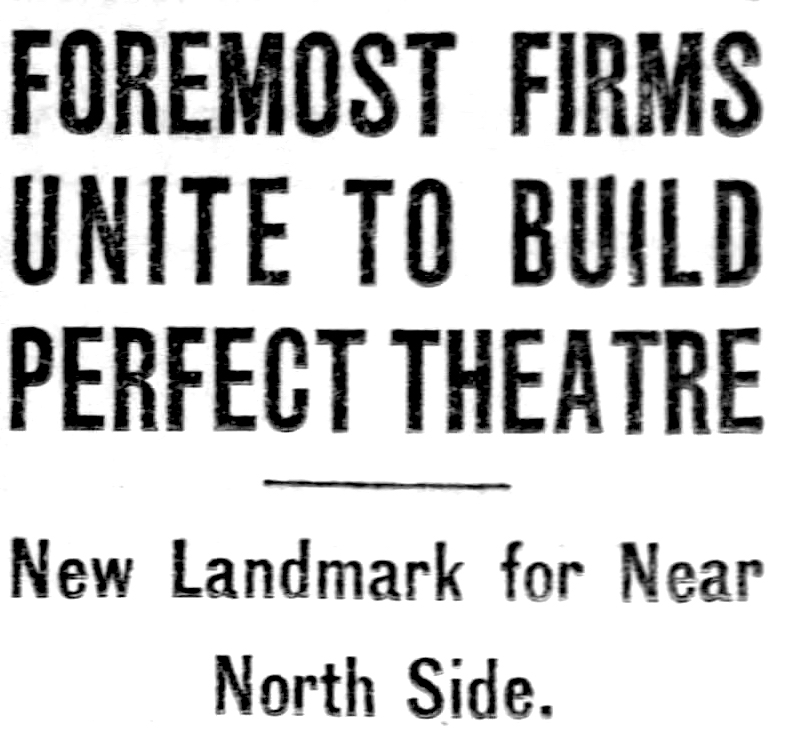 Paschen Brothers Construction company of Chicago, contractors of repute, were the generla contractors selected to erect the new Esquire theatre.

Speed and experience were the requirements for this type of construction and for that reason Paschen Brothers Construction company, who have erected a great many theatres, skyscrapers, hotels, and schools, were selected to erect this magnificent fireproof structure.

Among the leading theatres built by them are the Chicago, Trivoli, Uptown, and Southtown.

They have put into the Esquire the best that their staff could create to mark a new epoch in building construction.

The huge canopy and vertical sign was built by the White Way Sign company. Containing a total of 2,100 feet of neon tubing and 3,500 lamps, it will present a colorful view for the entire near north side.

Electrical Perfection.
The electrical installation on the new theatre is another accomplishment of the Dearborn Electrical Construction company, 1 North La Salle street, who have been identified with theatre installations in and about Chicago for the last twenty-five years. The outstanding feature of the electrical system in this theatre is the soft lighting effect in the auditorium which is obtained by the use of more than twelve hundred feet of blue neon tubing cleverly concealed behind plaster coves.

Electrical supplies in the Esquire theatre were supplied by the Hyland Electrical Supply company and achieve many new brilliant effects in lighting developed through months of experimental work. As agents for the Westinghouse Electric and Manufacturing company, Hyland was well qualified for this most exacting work. 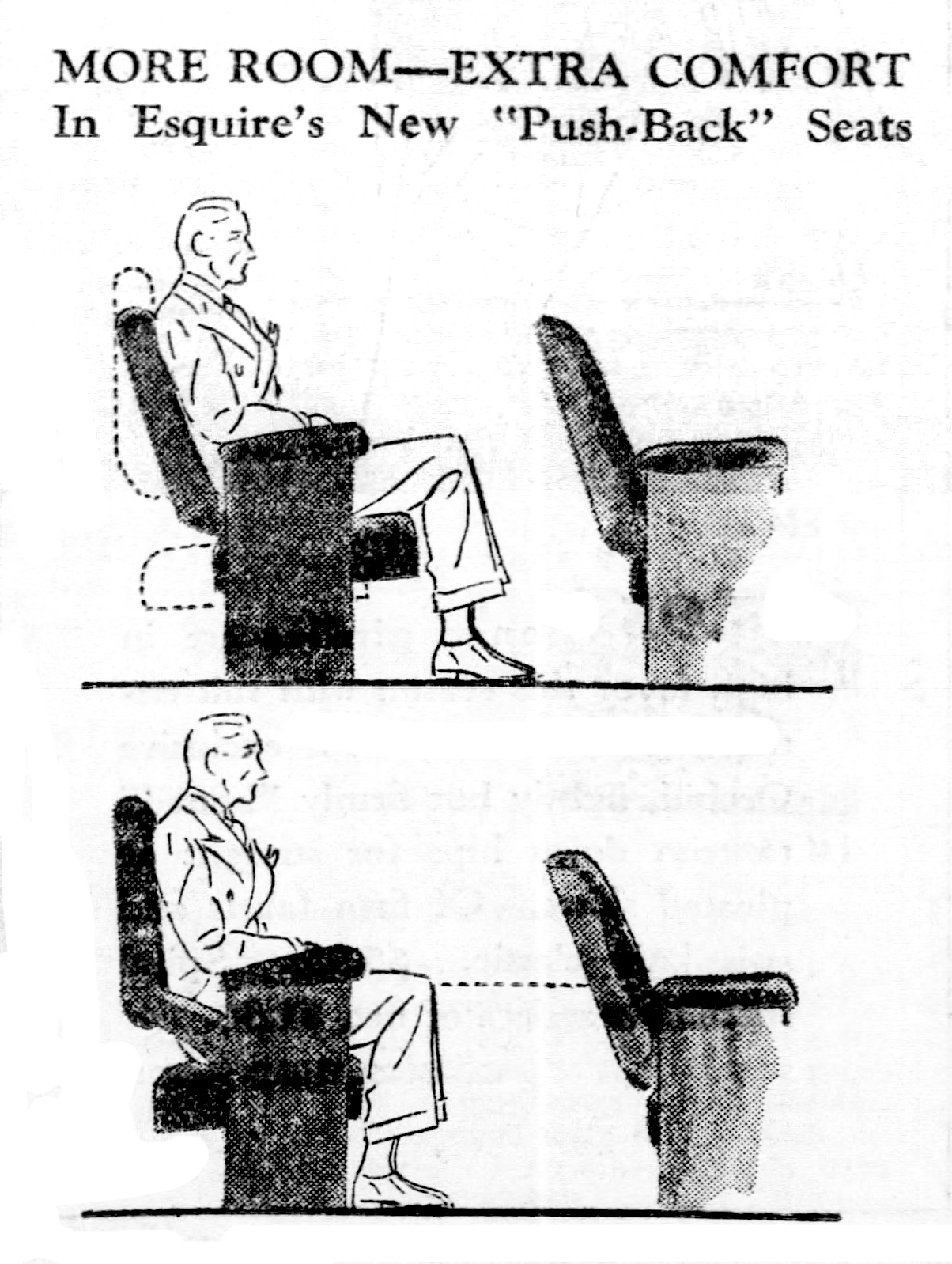 Fresh, Cool Air.
The complete cooling system for the theatre was furnished and installed by the Kroeschell Engineering company, one of Chicago’s best known air conditioning engineers and contractors. Forty-one thousand cubic feet of air per minute is dehumidified, cooled, and conditioned by means of copper fin type refrigerator coils. Refrigeration is produced by two large, completely sealed, motor driven, refrigeration units, which are the latest development of the huge Westinghouse laboratories. The entire system will operate under full automatic control.

Although no part in the actual physical construction of the theatre was by the Filmack Trailer company, they have made a generous contribution to the effects of the performance with their outstanding trailers. Screen trailers are the mouthpiece of the theatre and as the creators of the Esquire trailers, the Filmack Trailer company has done an outstanding job.

New Seats a Thrill.
The new “push-back” chairs installed in the Esquire theatre mark a revolutionary new improvement in seating comfort. These new chairs were invented and developed by M. W. Hard, engineer, and Mr. Alan Hale, noted motion picture actor, and embody an entirely new patented principle. The seat moves back to allow others to pass along the row without inconvenience to the occupant of the chair.

They are spacious and luxuriously upholstered. They offer the utmost in restful lounging ease and relaxation. They were manufactured by the Kroehler Manufacturing company, world’s largest furniture wholesalers.

Create an ultramodern exterior and interior that will be enthusisatically welcomed by the most fastidious clientele.

This was the order given to their architects, Pereira & Pereira, by the owners of the Esquire theatre. It was a large order and a difficult one, and has taken over two years to fulfill. The architects, in turn, awarded the painting and decorating contract to Hannis R. Teichert, who was responsible for most of the theatrcal interiors in this part of the country.

The “unusual” and “standard” paints and colors did not meet the exacting requirements of Teichert or the architect, so chemists and colorists of the Great Western Paint company dug into the problem of creating a special light reflecting paint. They also succeeded in inventing many new colors and combinations especially for the Esquire.

Completely Fireproof.
Fireproof construction in the new theatre was carried to the highest possible standard. Many of the suggestions for fireproofing the new Esquire came from Wineman Brothers, who carry all of the insurance for the theatre, and it was through their counsel that it reached a state of perfection.

An unusual feature of the Esquire is the deadening of the stage walls behind the screen with a one inch thickness of Sprayo-Flake, which was sprayed directly on the walls. All of this work was done under the supervision of the Insulation Engineering Service company, specialists in theatre acoustics.

The fireproof roof of the theatre was designed and built by the Jacobson Roofing company. Working in conjunction with the architects, Pereira & Pereira, they have built a completely weatherproof fireproof roof. 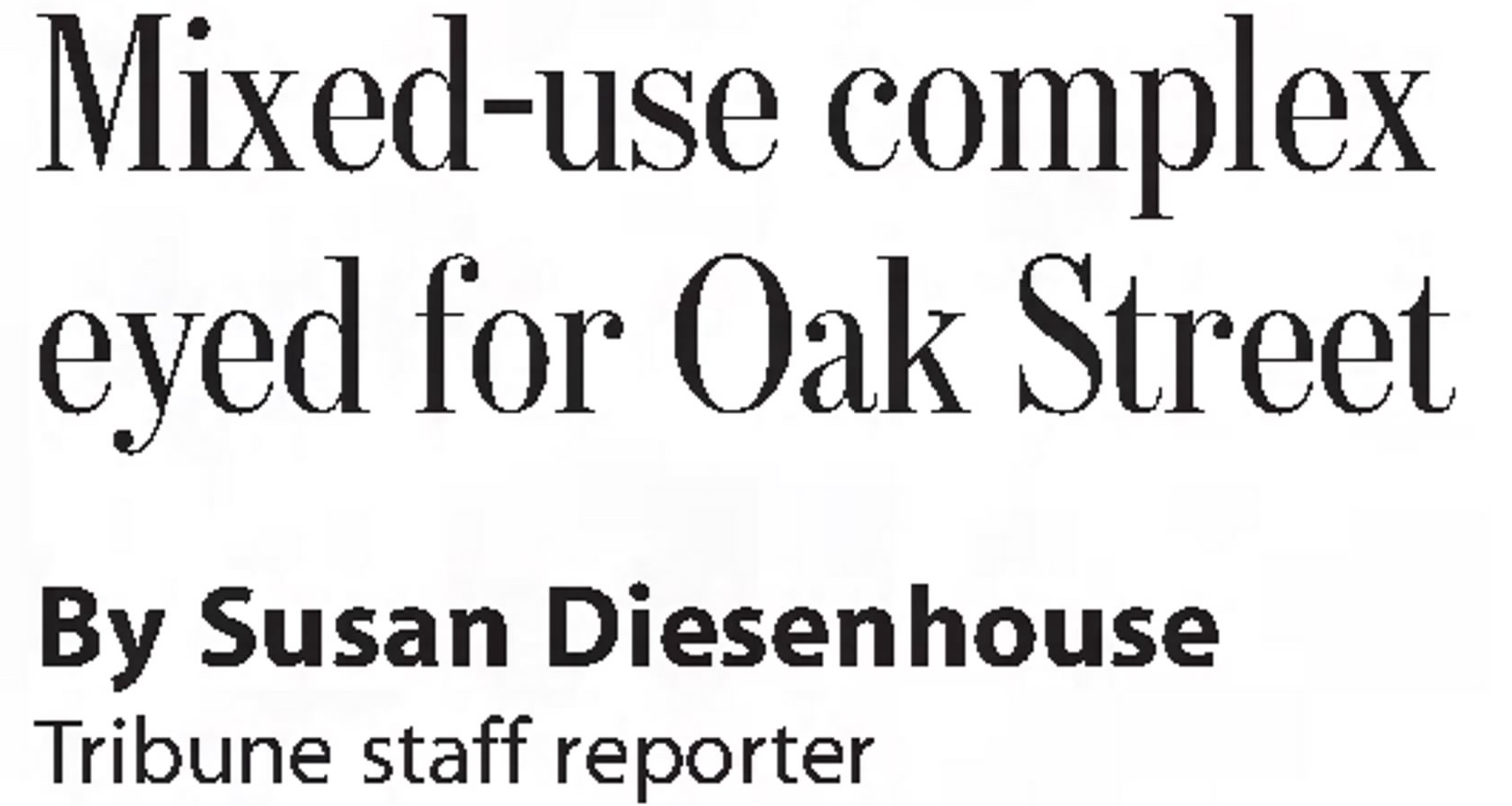 The last movies will show at the Esquire Theater on the Gold Coast Thursday after which its owner will start raising the curtain on a possible retail-hotel complex that would replkace the 1930s-era building is demolished.

“Our vision os to keep with, and add to, the street’s luster and reputation for exclusive boutiques,” said developer Jeffrey Shapack, a partner in Chicago-based M. Development LLC.

The residential and retail developer acquired the Oak Street property four years ago. Most recently, AMC Entertainment Inc. has been managing the theater, often showing films that already have run at downtown megaplexes.

Shapack expects to begin demolishing the Esquire in about 14 months and start construction on a mixed-use complex likely to include retail, restaurants and perhaps, a hotel or condominiums.

In planning the project, he’s talking to luxury retailers and restaurateurs that operate in New York, Los Angeles, Miami and Chicago, Shapack said.

One possible plan would include two low-rise retail buildings with a 10-story hotel in between, said Ald. Burton Natarus (42nd), who has reviewed the drawings. Such a project could be built under current zoning regulations. However, it would require approval from the Chicago Plan Commission under the Lakefront Protection Ordinance, Natarus said.

In the 1980s, Natarus said, the Esquire was denied landmark status.

“That was one of few instances in which a historic building was turned down,” he said. 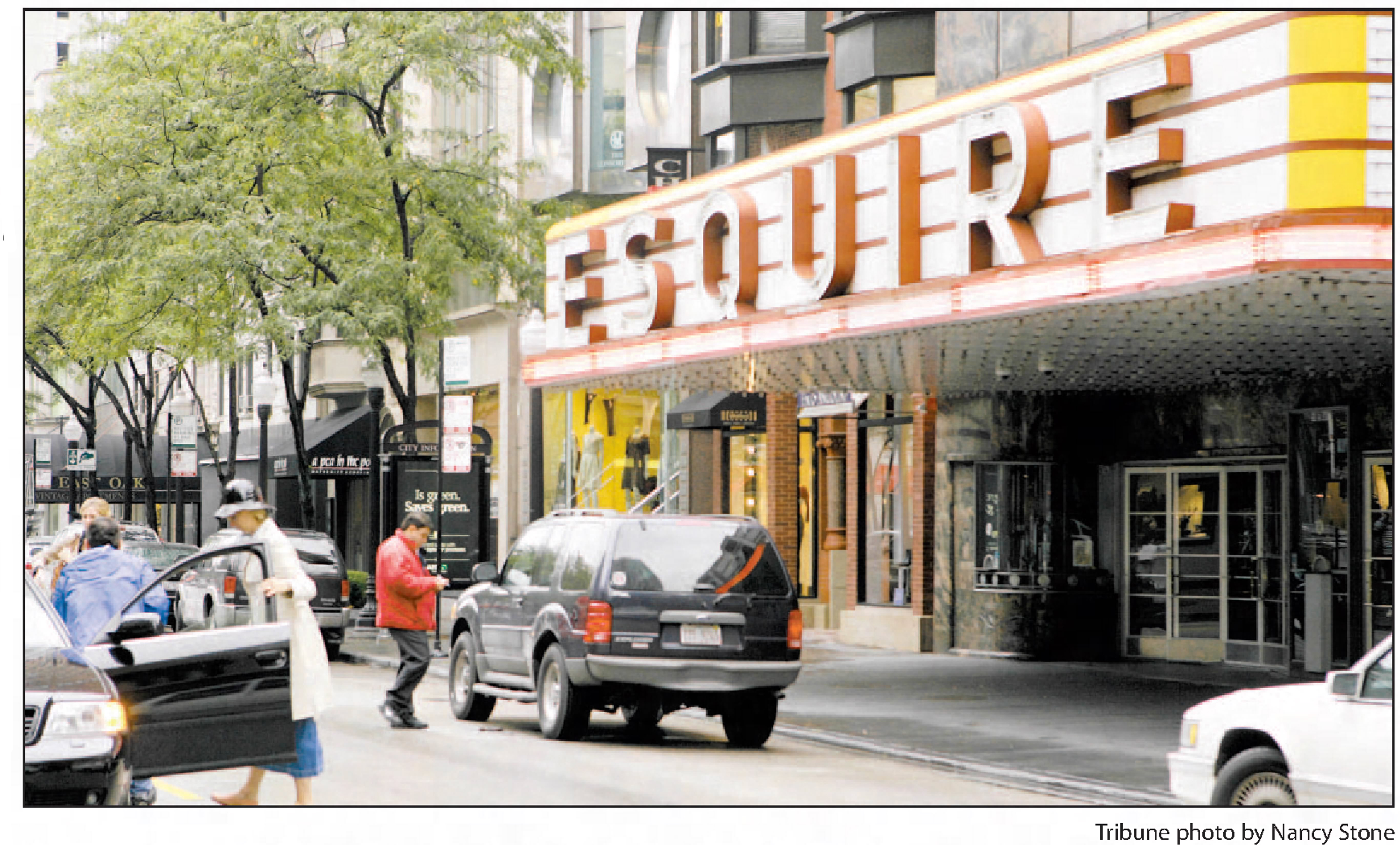 The demolition of the Esquire never took place. On February 26, 2015, the theater building was sold to Ponte Gadea, the investment arm of Zara, for $176 million. Cooper’s Hawk opened a restaurant in the building in 2019.