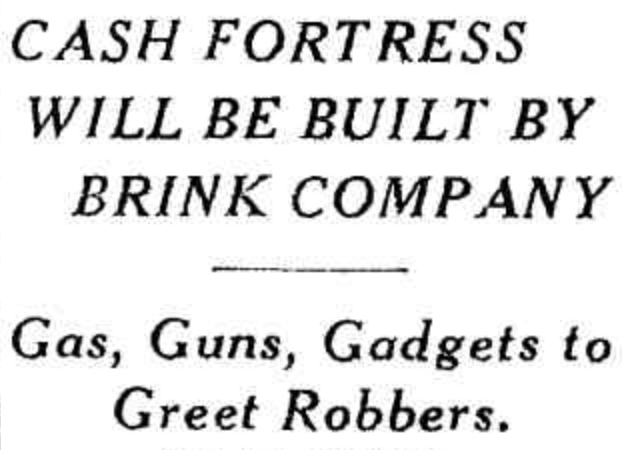 Chicago is to have what is claimed will he the first building in the country erected exclusively for armored car service—a $200,000 fortress for Brinks, Inc., at 711 West Monroe. The company, which transports annually 100 billion dollars the streets of 800 cities in the United States, now operates more than 600 armored cars.

The building will have a number of unusual features. It will have a modern rifle range for practice of guards, messengers and other employes. 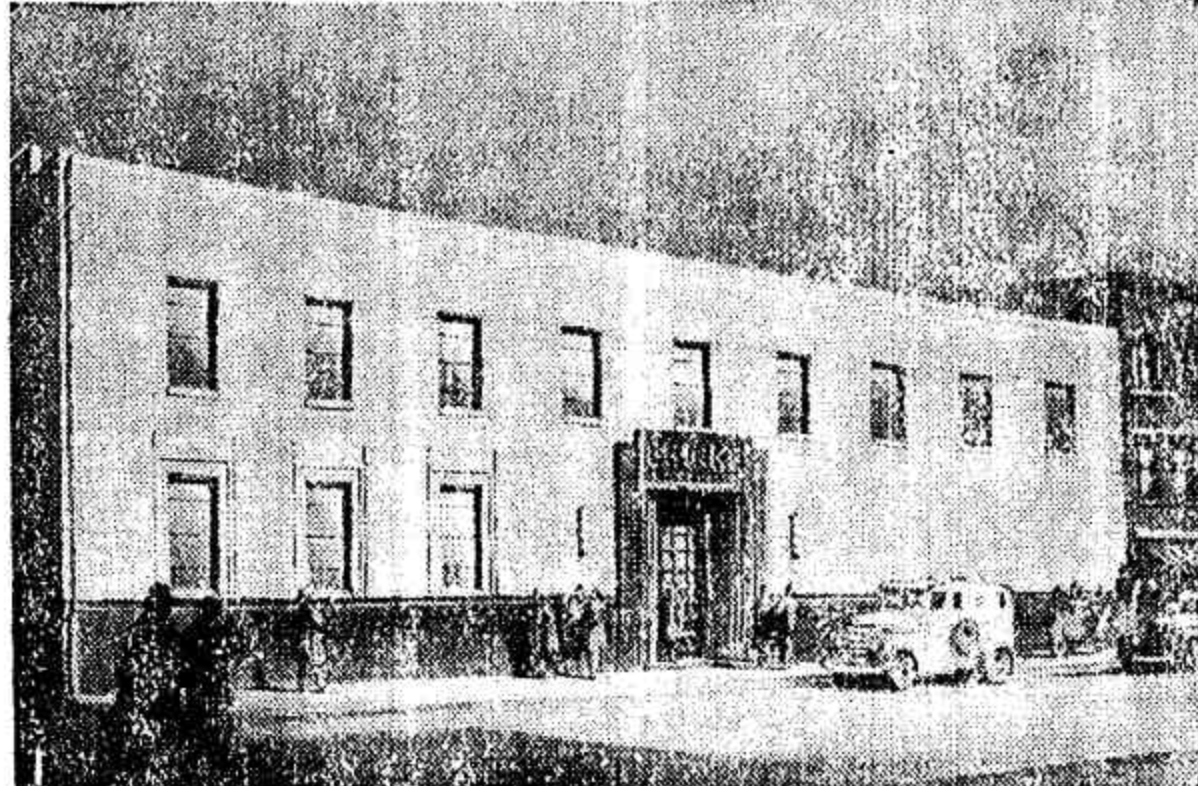 Welcome Gunmen-With Guns
Filled with various protective devices against gunmen and coin hijackers, this building will probably be the nearest thing to a fortress that can be found in Chicago. It is the new $200,000 home of Brink’s, Inc., movers of money, to be erected at 711 West Monroe street.

Warm Welcome to Crooks.
Several concealed machine gun nests will be located in the building and it will be equipped with modern gas apparatus so that the entire structure can be gassed from a concealed location by one operator. All doors in the dispatching department will he opened and closed automatically from a central control.

The latest in alarms and air conditioning, and four modern vaults, protected and controlled electrically, also will be features of the new building.

It will be a two story reinforced concrete, fireproof structure, and will house Ihe business offices of the firm as well as the armored car and money moving departments. J. L. McConnell is architect and engineer. The builder is the Avery Brundage company.

Started In 1859.
Perry Brink launched the film in 1859. He used a rickety old buggy to carry trunks from a local railroad station to Ihe old Tremont House. In t891 the company began moving money to meet pay rolls. At that time these movements of cash by insurance was unthought of.

In 1893 Brink’s was designated lo deliver and collect parcels, express packages, and money at night on the World’s Fair grounds. And during the 1933-’34 Century of Progress Exposition the firm was the only one authorized to transport money to and from the Fair.

The money department of Ihe firm was divorced from the general express service in 1917. Twelve years later, in 1929, the express branch vas sold. 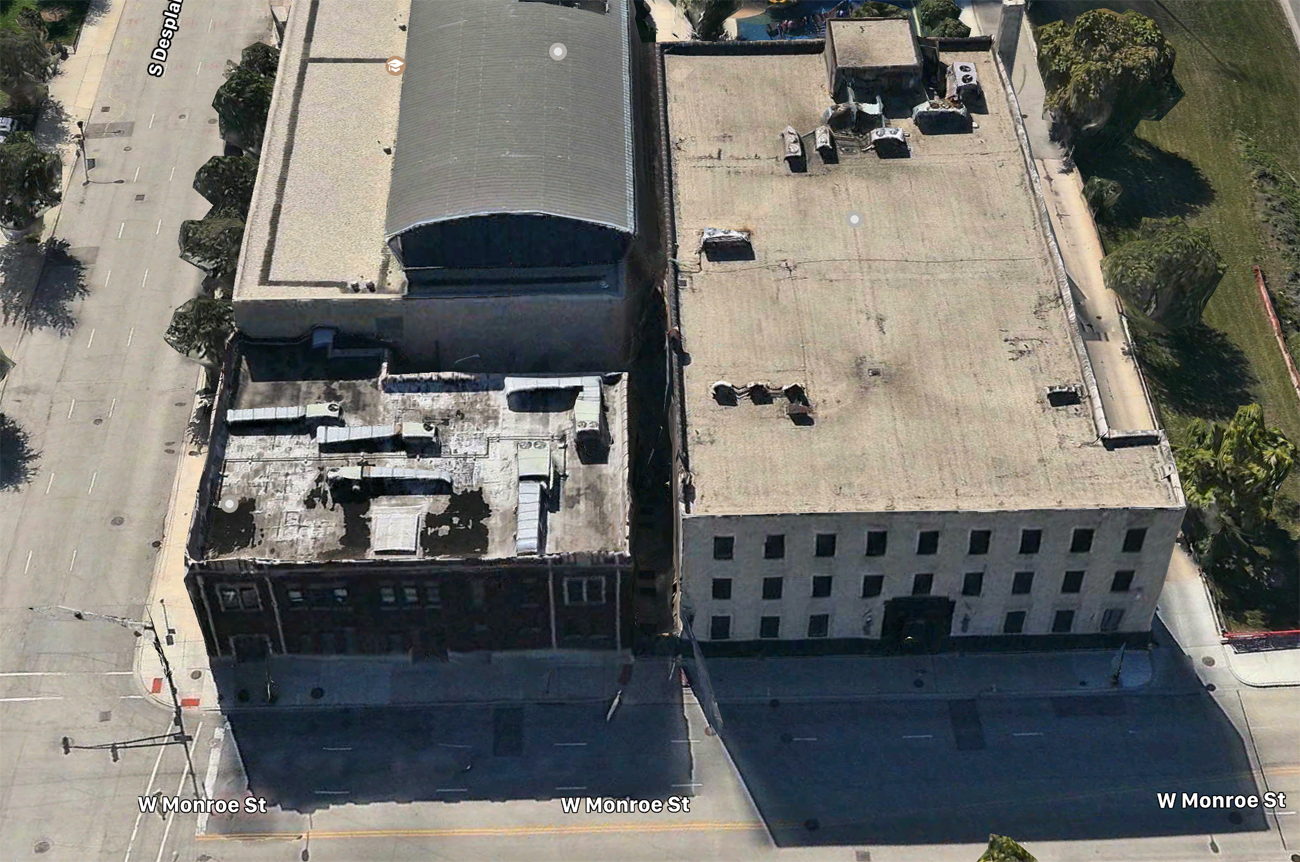 Brink’s, Inc., world s largest privately operated cash delivery and storage service with a nationwide fleet of more than 1,000 armored cars, will move from its fortresslike headquarters on the west side to an even more heavily guarded bastille on the south side.

This was disclosed yesterday by John D. Allen, president of Brink’s, Inc., who said his firm had purchased the three story former Nash building, occupying an entire block of frontage on the north side of 24th st., between Prairie and Indiana avs.

Old Building Once “Safest”
When erected in 1937 the west side headquarters at 711 W. Monroe st., was considered the last word in safeguarding the millions of dollars that flow thru the Chicago office of Brink’s daily.

When the south side building is remodeled along 1952 safety lines the building will be as nearly impregnable to bandits or mobs as modern war defense methods can make it, Allen said. Here are a few in the long list of safeguards against holdup of the Brink’s fortress:

Concealed machine gun nests will be scattered thruout the building, which will, be equipped with modern tear gas apparatus so that the entire structure can be gassed from a concealed location by one operator.

All doors in the dispatching de- partment will be opened and closed automatically from a central control. The latest In alarms will blast a warning of any raids by robbers.

New, modern vaults, protected and controled electrically, will be features in guarding the many millions of dollars collected daily.

And in case the human element is called on to supplant or aid the automatic safeguards, and fast, accurate Is needed, guards, messengers, and other em- will be trained as crack shots in a modern rifle and pistol range in the building.

Allen said a number of electronic and other safety devices are planned.

Firm Launched In 1893
It was once occupied by Hollingshead with a motor salesroom. It is now under lease, expiring shortly, to the federal government for occupancy by the bureau of public debt. It will be remodeled from plans by Holabird & Root & Burgee, Part of Brink’s west side building recently was condemned to make way for the new northwest expressway.

Perry Brink launched the firm bearing his name in 1839. He used a buggy to carry trunks from a local station to the old Tremont house. In 1891 the company began moving money to meet payrolls. 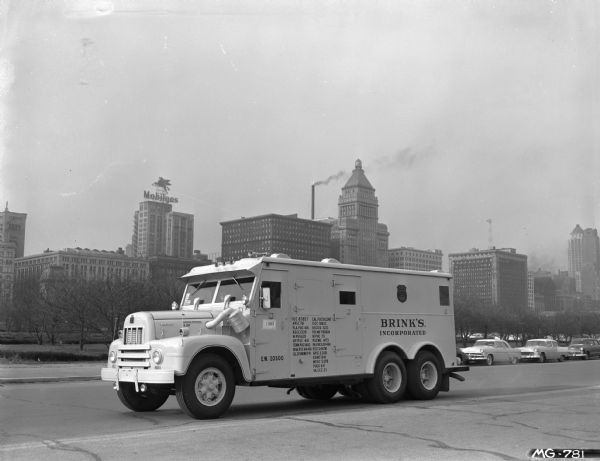 International RD-190 truck with an armored body, operated by the Brinks Express Company on Lake Shore Drive. About 1956

Brink’s, Inc., a company that makes its living carrying other peoples money around, will mark its l00th birthday Tuesday.

It was on May 5, 1859, when Washington P. Brink, a thrift conscious Yankee who came to Chicago from Vermont and bought a horse and buggy, made his first trip in the collection and delivery of parcels, baggage, and, merchandise.

Today the firm, described as the world’s largest commercial money-mover, and its subsidiaries operate more than 1,000 armored cars from 113 offices serving 2,500 communities in the United States and Canada, and employ more than 5,000 people. The main office is at 234 E. 24th st., Chieago. 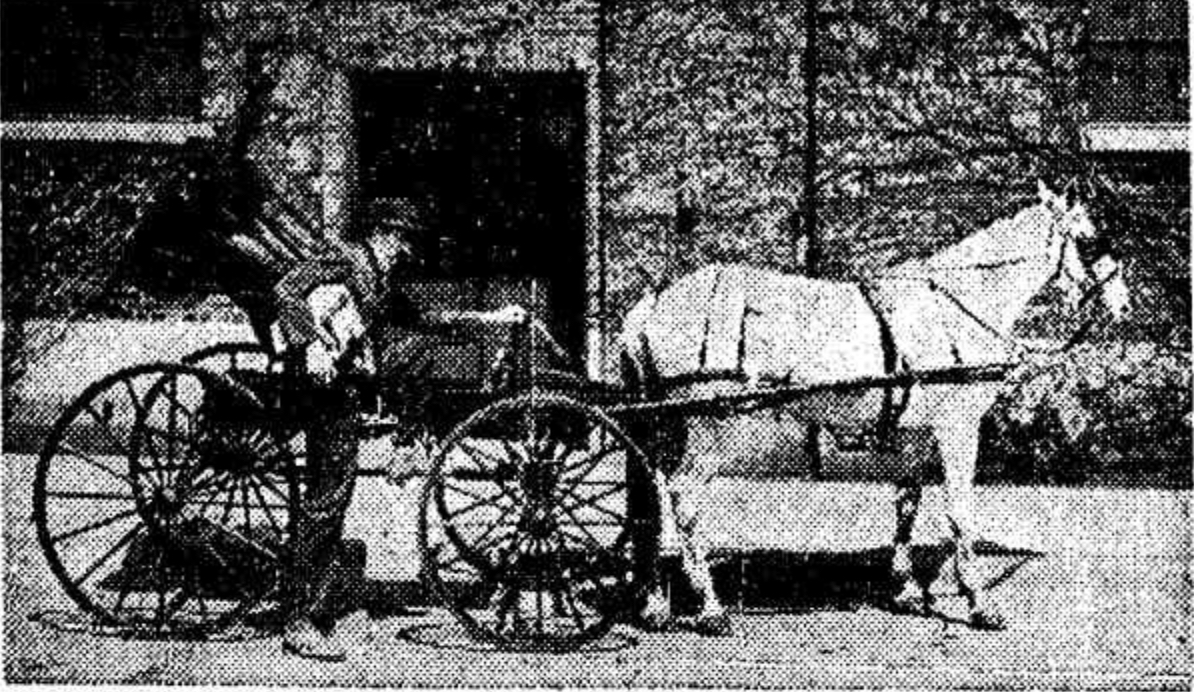 Messenger in early Brink’s, Inc., history delivered payroll cash wrapped in a newspaper via horse and buggy, Under the buggy seat was a sawed-off shotgun. The firm is marking its 100th year this week.

150,000 Stops a Week
Eugene E. Murphy, president, said the company’s cars handle an average of 1? billion dollars a day, make more than 150,000 commercial stops and more than 31,000 bank stops each week, and run up an annual total of about 12? million route miles.

In 1879 Brink’s Express was incorporated and became Brink’s Chicago City Express company. In 1891 the first delivery of money was made—a payroll carried to the Western Electric company.

In the early 1900s cash for payrolls and other purposes was wrapped in newspaper or a pair of old overalls and tossed under the seat of an inconspicuous buggy, Murphy explained.

B. O. ALLEN, express company paymaster, and Louis C. Osenberg, his assistant,killed by outlaws yesterday while defending an $8,776 pay roll on August 28, 1917. Above is the scene of the robbery before the Winslow Brothers Company factory at 4600 Harrison street, and Charles Carrao, owner of the automobile, identified as the bandits’ machine.

Shotgun on Buggy Floor
If the sum was a large one, the driver also had a sawed-off shotgun on the buggy floor.

By World War I ordinary touring cars were in use. The holdup and murder in 1917 by “Ammunition” Wheed of a Brink’s messenger making a money delivery af Winslow Brothers plant on Chicago’s west side led to the first experiments with light armored cars, Murphy said. By 1927 the steel frame and floor had been added.

Because money is the commodity it handles, the company has had more than its share of publicity.

Probably the most well known incident In recent rears was the robbery of the Brink’s Boston office in January, 1950. The loss amounted to more than 2½ million dollars.

An Intensive Probe
After one of the most intensive criminal investigations ever carried out in this country the Federal Bureau of Investigation on Jan. 12, 1956, announced the solution of the case and named 11 men as participants.

One of the men died before the case was solved and a second died while in custody. A third pleaded guilty and turned state’s evidence at the trial of the remaining eight. All were convicted and received life sentences. They filed appeals last February which are before the Supreme Judicial Court of Massachusetts. 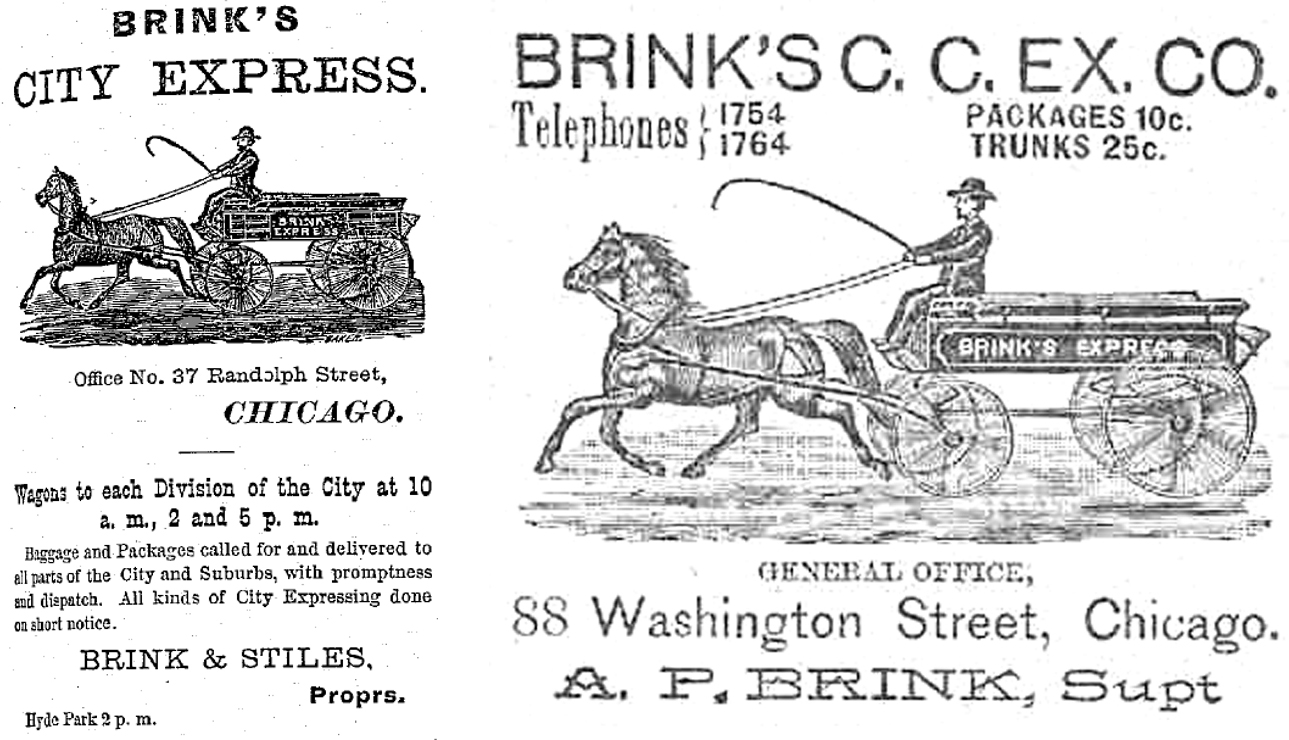