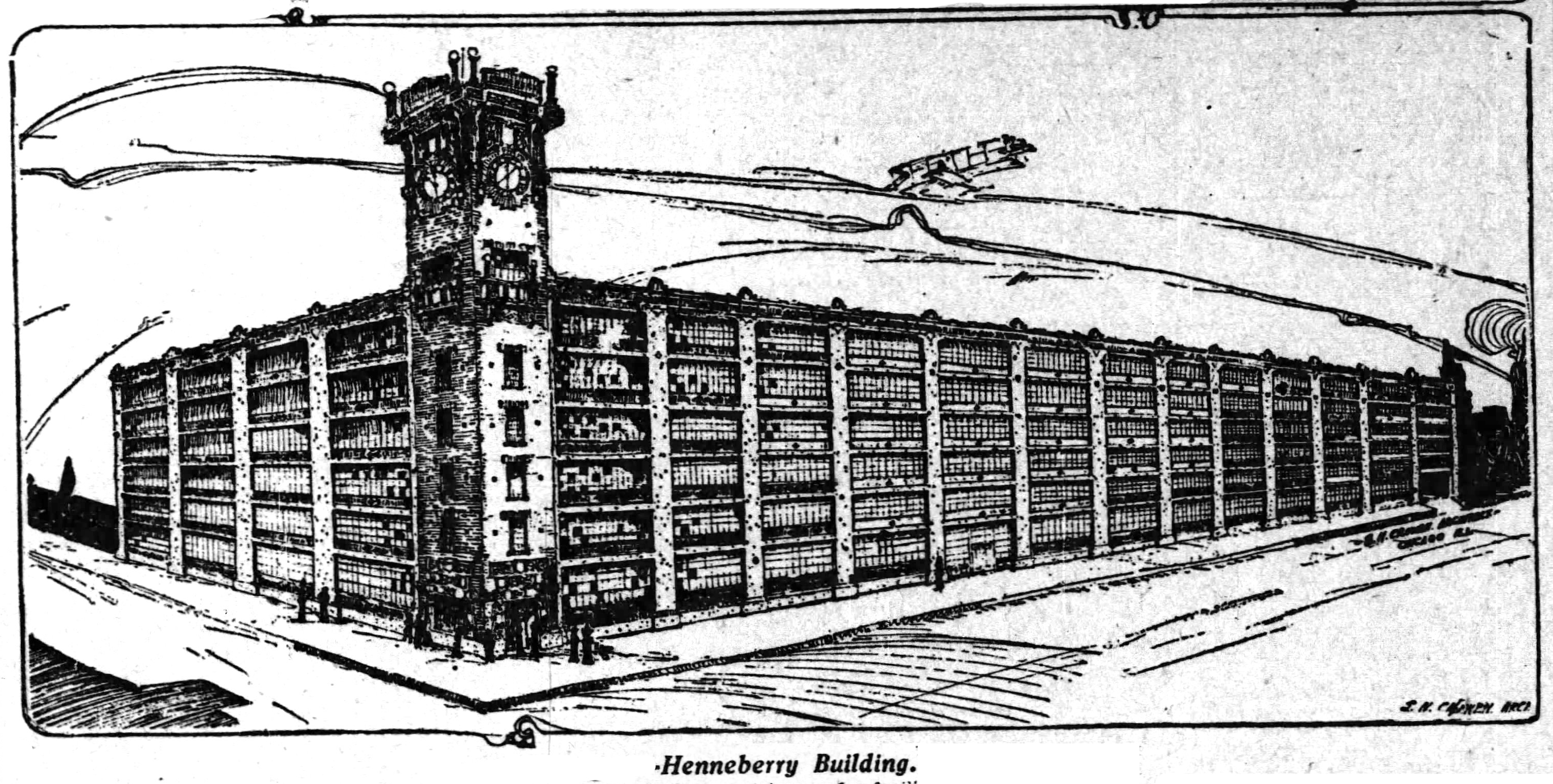 The building W.M. Hoyt is to erect at the southeast corner of Twenty-second and Grove streets for the W.P. Henneberry company, printers, and which it is to occupy under a ninety-nine year lease, will combine an attractive appearance together with every fine convenience for facilitating business. It will be of reinforced concrete and steel construction, with sprinkler system. It will occupy the entire lot of 100×300 feet, will be six stories and basement, each floor having an area of 30,000 square feet. The floors will be so constructed, particularly the lower ones as to permit the use thereon of the company’s large magazine presses.

The cost is estimated at $50,000 and the rent paid by the company is to be 6 per cent on this, or $15,000 a year. Together with the ground rent, the company will pay Mr. Hoyt $18,000 a year. The plans for the building are being prepared by Architect Samuel N. Crawen, while the negotiations in connection with the lease were handled by J.J. Harrington & Co. 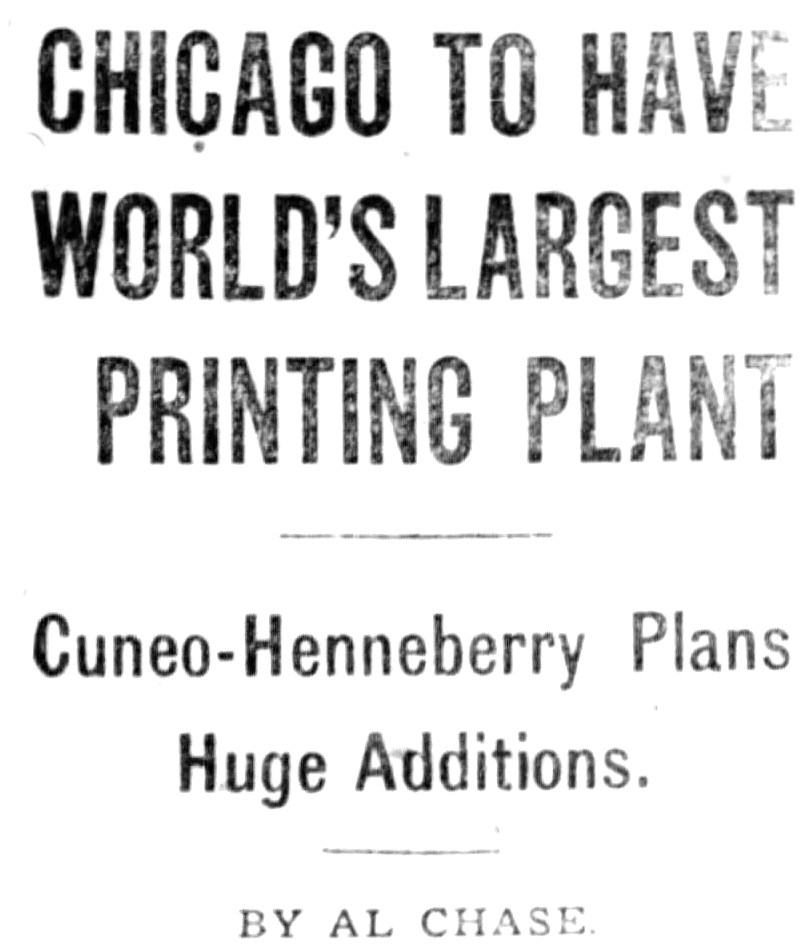 Chicago is to have the largest printing plant in the world. Architect Alfred S. Alschuler has drawn up plans and work will start at once on the first of three units which, together with the present large plant of the Cuneo-Henneberry company at 455 West 22d street, will give that concern an establishment much larger than that of the Curtis Publishing company, in Philadelphia, now said to be the biggest on this planet.

The site for the new plant isw on the west side of Grove street, just south of Austin, Nichols & Co.’s large building on 22d street, and is across the street of the Cuneo concern. It will extend back to the river.

“It was the prospect of the lakes to the gulf and the great lakes-ocean waterways that influenced us in building our new plant on the river,” said President Hohn F. Cuneo. “We use 250 tons of paper daily when we’re running full, so it means a good deal to be able to have our material brought in by boat.”

The first unit will contain about 165,000 square feet of floor area. As soon as it is finished work will start on the second unit. With the completion of the second Cuneo-Henneberry plant will then be considerably larger than the Curtis establishment in Philadelphia.

Contracts are about to be let for a new printing plant to be erected by John F. Cuneo for the Cuneo-Henneberry company, of which he is president and chief stockholder, on the west side of Grove street, just south of 22d street. Each of the three units planned by Architect Alfred S, Alschuler will be six stories, of reinforced concrete construction, and will be completed Feb. 1. With the completion of the second unit Chicago have the largest printing plant in the world, it is now being surpassed by the Curtiss Publishing company’s huge Philadelphia establishment.

And an interesting angle to this prospective situation is that printing experts predict that in time, Chicago will supplant Philadelphia as the home of the Saturday Evening Post, Ladies’ Home Journal, and Country Gentleman. Already the Curtis Publishing company is saving three-quarters of a cent per copy, or $6,000 a week, which means over $300,000 annually, by having the Cuneo company print the entire western edition of the Saturday Evening Post. So if you’re a S.E.P. fan you’re reading a Chicago printed weekly, although it has the City of Brotherly Love date line.

“The western editions of eastern magazines are constantly growing larger,” said Mr. Cuneo, “and at the same time the eastern editions are shrinking. That means only one thing—they all eventually will be printed in Chicago, and later on their editorial and publishing offices will have to follow. The western edition territory is bounded on the east by a straight line between Buffalo and Pittsburgh and on the west by the Rockies.

A long list of eastern mail order houses and publishers do their printing with the Cuneo concern, and as figures of profit saved by using Chicago’s headquarters are convincing arguments, more undoubtedly will turn westward. 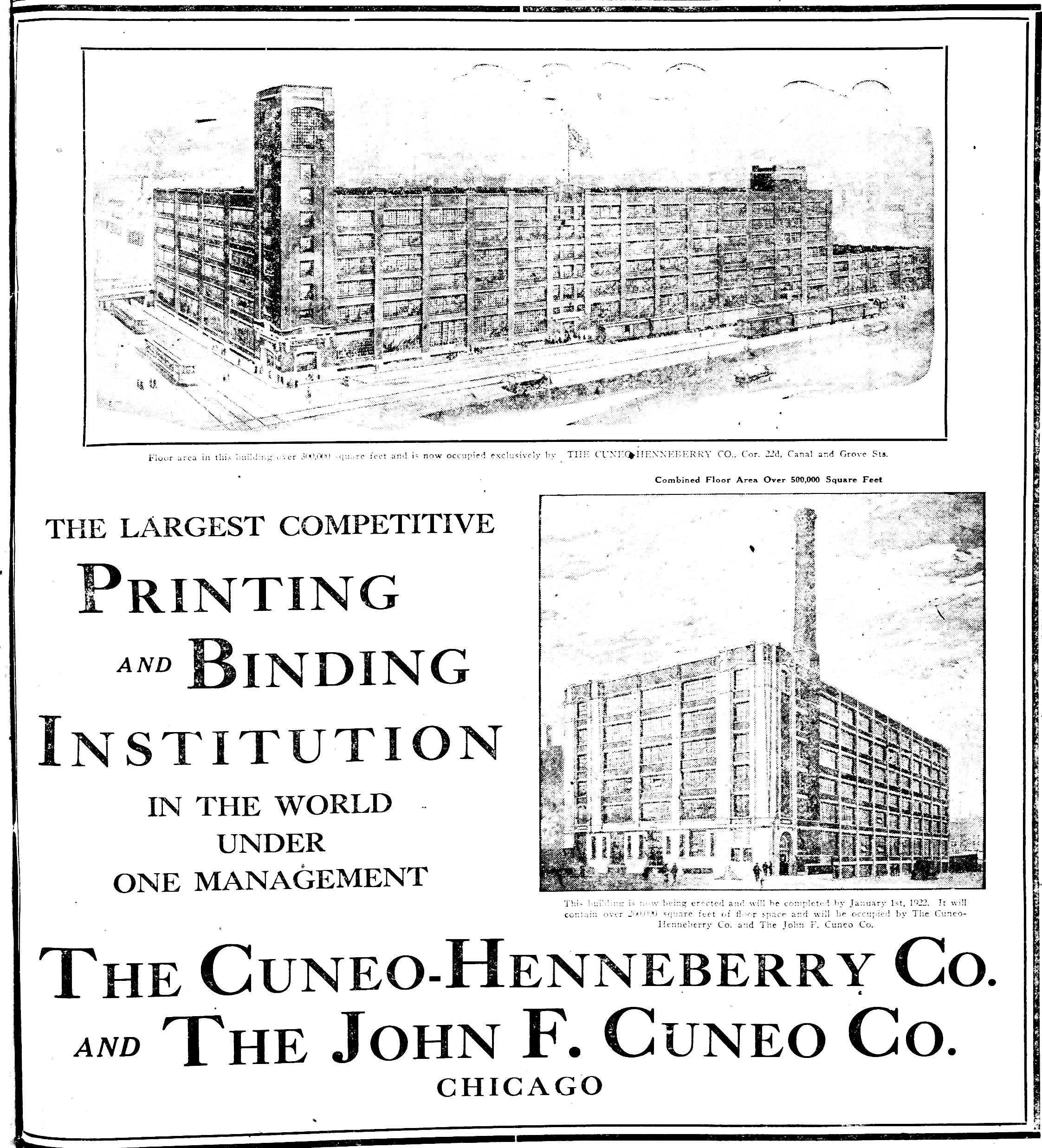 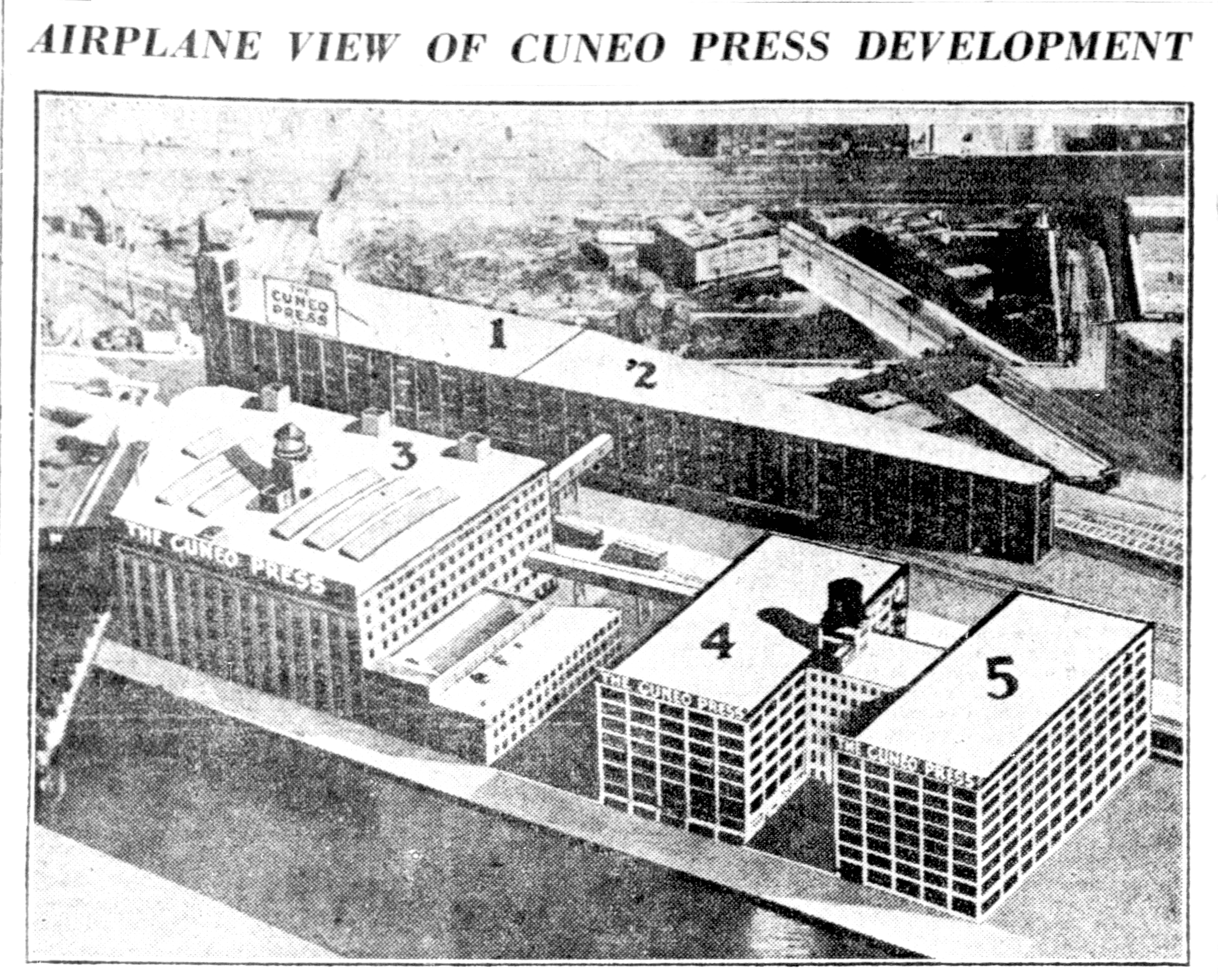 This is an airplane view of the Cuneo Press development at 22d street and the river. No. 1 is the original plant. No. 2 is one of the two new additions now under construction. No. 3 is the former plant of Austin, Nichols & Co., just leased by the Cuneo concern. No. 4 is a unit in operation for some time and No. 5 is now under construction. To the right of No. 5 the company owns space on which two more big units are to be erected later this year. Alfred Alschuler is the architect.

About 500,000 square feet of inner city industrial space is getting a facelift as a result of a recent property sale.

The Cuneo Press earlier this month sold four multi-story buildings on Grove Street immediately south of Cermak Road. Modern Copy Corp., a manufacturer of duplicating materials, acquired the buildings and 110,000 square feet of vacant land for an undisclosed price that included the assumption of back taxes.

The remaining 500,000 square feet will be rented out after a $500,000 remodeling program is complete. The new owners plan to renovate freight elevators improve loading facilities and build new entrances for multiple tenants. 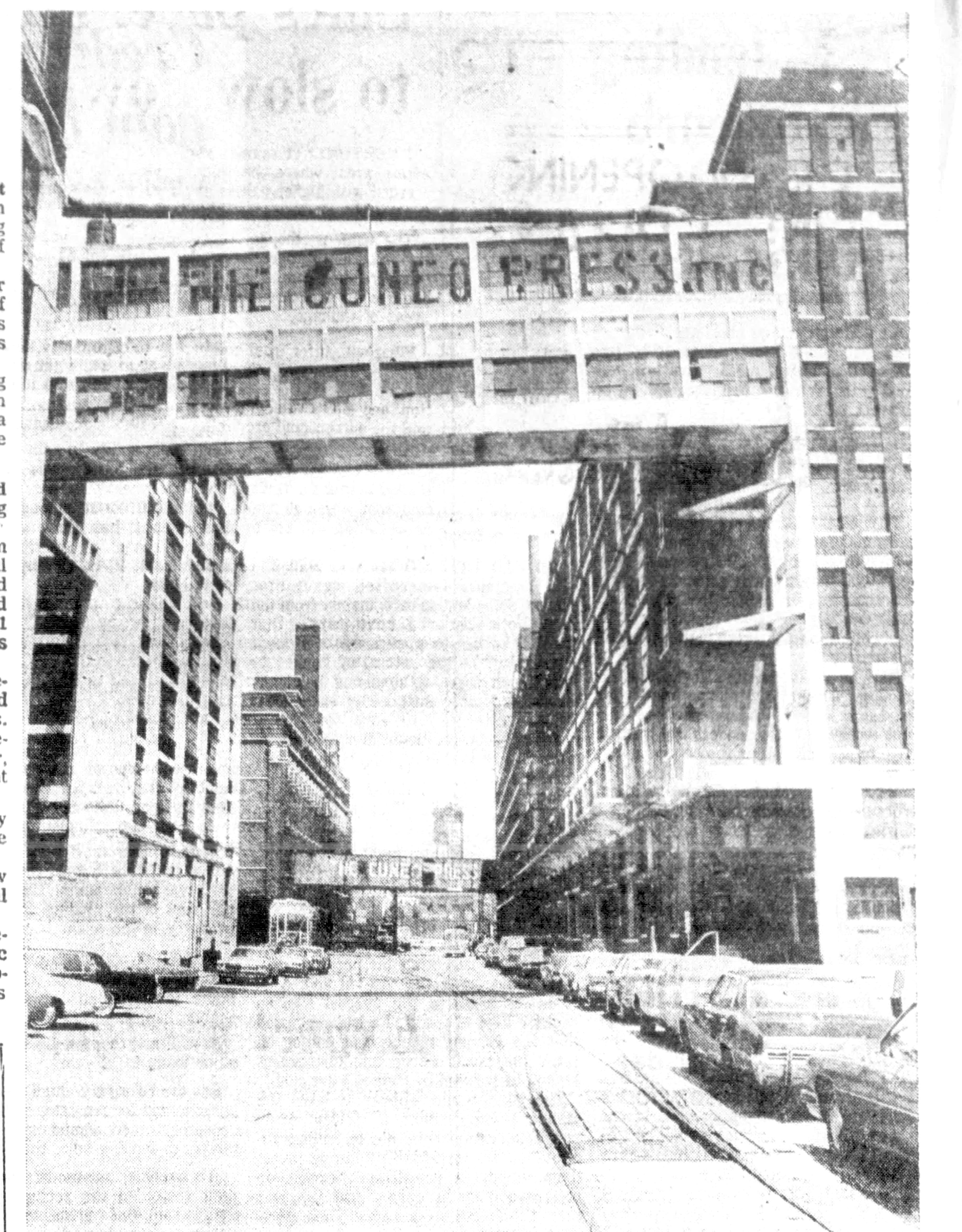 The Cuneo Press buildings on Grove Street south of Cermak Road are due for a facelift by new tenants.