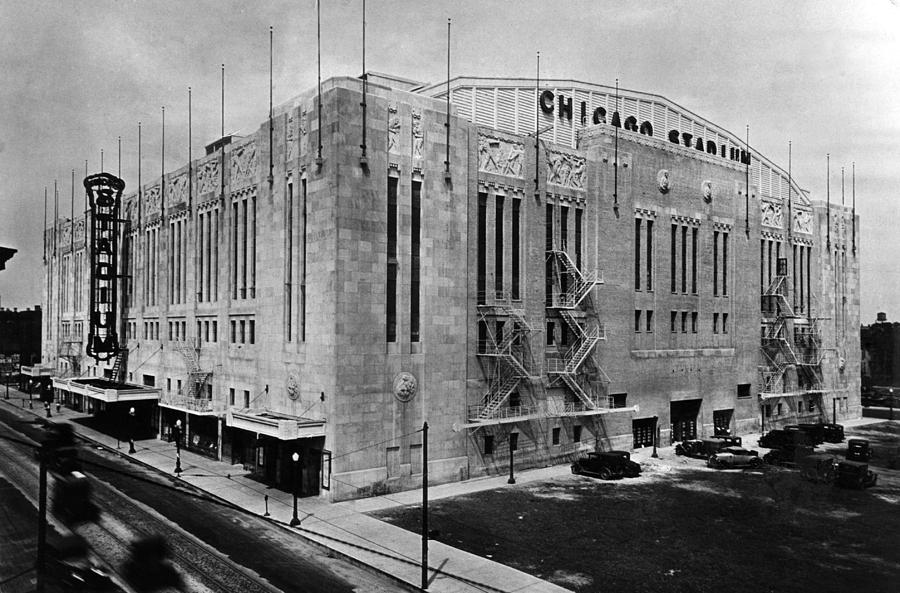 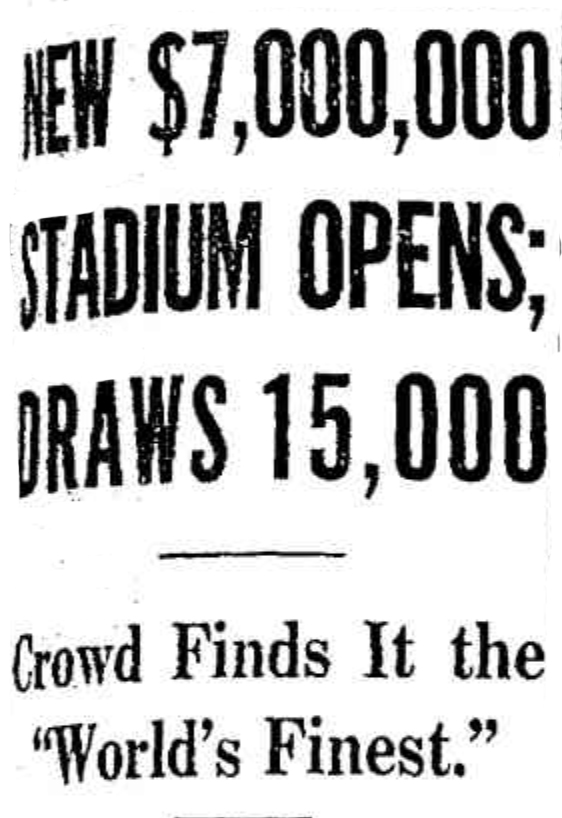 The finest and largest sport stadium in America was opened last night on West Madison street.

For years Chicago has been playing second fiddle to New York in this matter of sport arenas. Madison Square Garden, seating 20,000, was the greatest stadium in the country. Last night, Chicago stepped in front of New York.

The occasion was marked by a championship fight. Fifteen thousand people, 10,000 fewer than the new Chicago Stadium will hold, saw Tommy Loughran, handsome light heavyweight champion, keep the crown firmly on his head despite Mickey Walker’s desperate effort to remove it.

Cost Millions, Looks It.
Boxing experts for weeks had predicted the fight would be good. Loughran won, but Walker gave him a stirring battle. The details of the fight and the four others are told in the sporting section.

The opening of the Stadium wrote a red letter date on Chicago’s sporting and entertainment calendar.

P. J. Harmon, who started his professional career on the west side of the city, managing a small dance hall, brought a dream of many years to realization. He and a group of wealthy Chicagoans built the Stadium and they built well.

Lighted by Great Signs.
Situated eighteen blocks west of State street, and bounderd on the south by Madison, on the east by Wood, on the north by Warren, and by Lincoln on the west. It stands the greatest amphitheater for sport ever built in America.

Within the spectators found spaciousness and beauty.

The main hall is a vast circle of seats, wooden chairs painted red. There are no posts to obstruct vision. Twelve great steel girders support the roof. There are three balconies, the second half as wide as the first and the third a narrow ribbon with less than twenty rows.

Bunting draped the balcony railings and huge flags floated from the borders.

The ring, in the center, was lighted brilliantly. 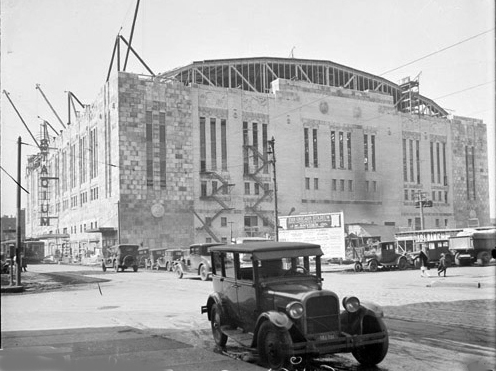 Fire Threatens Stadium.
Fire for twenty minutes threatened to turn the inaugural into something else than than the gala affair it really was. Happily the fire was quickly extinguished. Few, if any, of the spectators knew anything about it, and slight damage was done.

A barrel of tar and some lumber refuse were destroyed. They were located on planking left on the roof. How the fire started no one last night could say. But at 8:30 flames were shooting toward the sky, unseen from within, but vivid to folks outside the building.

Internes from the county hospital saw the flames and turned in an alarm. Firemen extinguished the blaze in five minutes. While they were working no one was admitted to the building. Bouts were going on in the ring and the crowd looked on without knowledge of the threat overhead.

Last night’s attendance was represented of all classes of Chicagoans. The seats around ringside, which sold for $21.60, the highest price charged for fight tickets in Chicago with the exception of those at the Tunney-Dempsey battle, were filled almost completely. The two upper balconies were well patronized. The first and lowest of the balconies had the wide open spaces.

Altogether it was an auspicious inaugural of what Mr. Harmon and his millionaire backers believe is a new and enlarged era of sport events in Chicago. 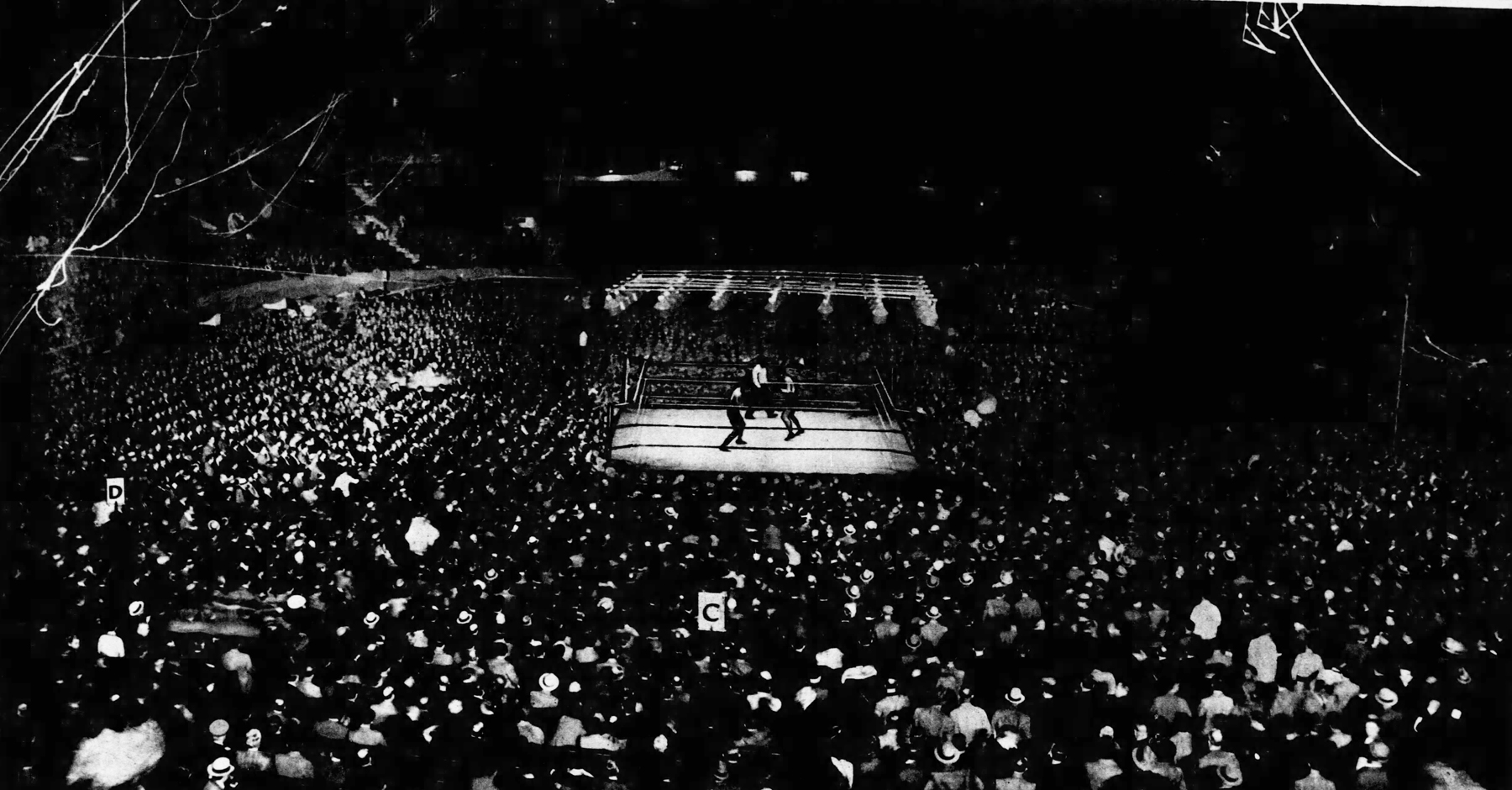 AMERICA’S GREATEST SPORT STADIUM.
Chicago’s $7,000,000 arena, seating 25,000 persons was opened in this picturesque setting with a battle between the two world’s champions, Tommy Loughran and Mickey Walker. The amphitheater, the realization of lifelong dream of “Paddy” Harmon, exceeds by 5,000 the seating capacity of New York’s Madison Square Garden. Loughran, the light heavyweight champion, defeated Walker, the middleweight king in the inaugural show.

Where Presidential Candidates Have Been Nominated and Trained Elephants Have Performed

HAD it existed in the Ancient World, the Chicago Stadium, out on West Madison street, would have been included among the “Seven Wonders.” It is the world’s largest building of its kind.

Here Herbert Hoover and Franklin D. Roosevelt were nominated for the Presidency by the National Conventions of their respective parties. Here during the Rodeo, cowboys have ridden bucking broncos and have bull-dogged steers. Acrobats, equestrians, aerialists, and trained elephants have performed in its arena or under its steel girders. Here six-day bicycle racers have competed, boxing tournaments have been held . . . tennis tournaments … ice hockey matches . . . indoor track meets . . . flower shows . . . operas.

The Stadium, an immense pile of steel and stone, was erected in 1929. It is a monument to the enterprise of Paddy Harmon, west side politician and philanthropist, whose body lay in state there shortly after the completion of the building.

As a convention hall, as a temple of sport, as a setting for great public spectacles, the Chicago Stadium relegates New York’s new Madison Square Garden to the background.

The Stadium has a seating capacity of 25,000, but on special occasions has accommodated 30,000 people without crowding. It occupies an entire city block, with parking spaces at either end. The seats are arranged in tiers around an oval 244 feet long and 145 feet wide.

It manufactures its own weather and has its own refrigerating plant. The ventilating and cooling systems, under thermostatic control, deliver 6,000 cubic feet of conditioned air every minute. The $368,000 ice-making equipment can manufacture 600 tons of ice within twenty-four hours, and for hockey matches or skating, the entire floor can be converted into a rink. The following week perhaps it may blossom into a huge garden.

In the building of the Stadium special attention was given to acoustics, with the result that acoustically it is superior even to the Mormon Temple at Salt Lake City which heretofore had been considered peerless in such matters. 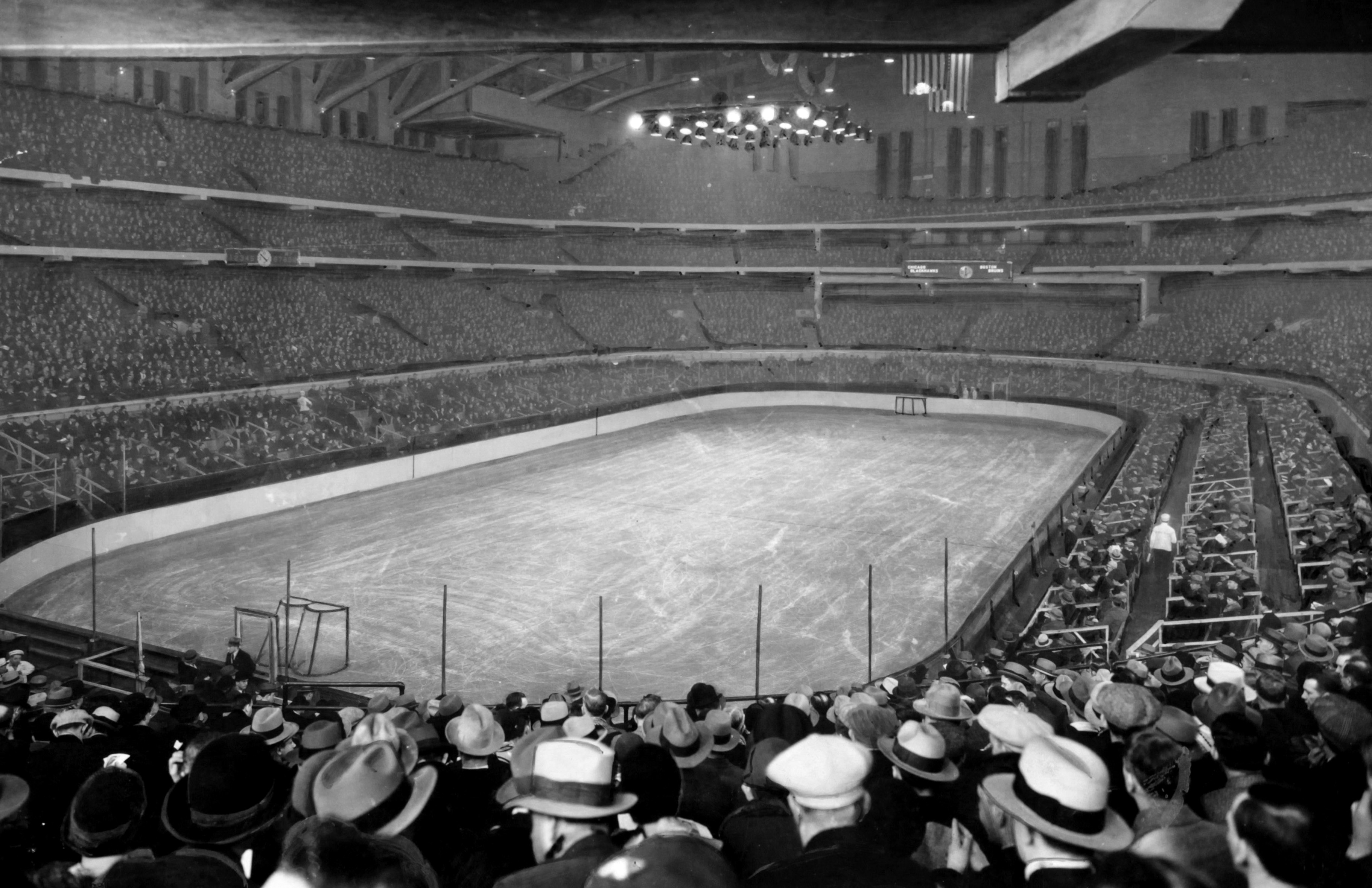 Interior of the Stadium
1930

A “super” amphfying system makes it possible for a whisper to be heard in the most remote corner of the building. Powerful batteries of floodlights can be focused on any section of the amphitheater as required.

Unique in respect to being the world’s largest is the Stadium organ, in volume of sound the equivalent of twenty-five bands of 100 instruments each, or 2,500 orchestral pieces. The great organ plays simultaneously 40 harmonizing snare drums, 16 vioHns, 12 saxophones, 4 bass drums, 12 flutes, 9 clarinets, 6 trumpets, 7 French horns. More than 240 feet of pipes and 5,000 feet of wire have gone into its making. The range of controlled sound runs all the way from a bird note to a thunder storm, but its full power never has been tested. On several experimental occasions, its vibrations have shattered electric light bulbs.

With main floor entrances on opposite sides of the building, balcony entrances at the four corners, and exits at either end, the Stadium can be emptied, even of a capacity crowd, within a few minutes.

The Stadium has its own staff of trained ushers, its own fire and police departments, the latter augumented by city police and firemen. President Sidney N. Strotz has tried to leave nothing undone that will make for the convenience, comfort and safety of the public.

There is something of interest going on almost all the time at the Stadium. Its conventions, expositions, entertainments, and sporting events have attracted nation’wide attention, thus adding to the fame of Chicago.