The Republic is a twelve-story retail business building. The ground floor will have several shops entered from the street; the second floor will be occupied by a bank, and the straight hallways on each floor above this will be like streets on which small shops or offices will front. It is altogether a new idea, and will be in the nature of a department store in which all the departments are independent. Its dimensions are 100 feet on State Street, the same on the alley in the rear and 145 feet on Adams Street. It has a basement and sub-basement and twelve stories above ground, and the foundations and steel construction are calculated for five stories more, which may be added at a future time. The height above the street is 195 feet, while the depth of cellar is 27 feet. The construction is all steel skeleton with I beam floors, and the entire exterior is white enameled terra cotta. The whole fireproofing is of porous terra-cotta, with flat hollow tile arch end pressure floors. In the finishing the floors of rooms will be hard wood laid tightly on concrete and nailed to wooden strips; but the corridors, toilet rooms and principal stores will be of marble or tile mosaic work. All the windows, except on the two street fronts, have hollow metal frames and sash, and are glazed with wired glass. All the shafts have metallic doors, and the whole building is to be equipped with an automatic sprinkler system. 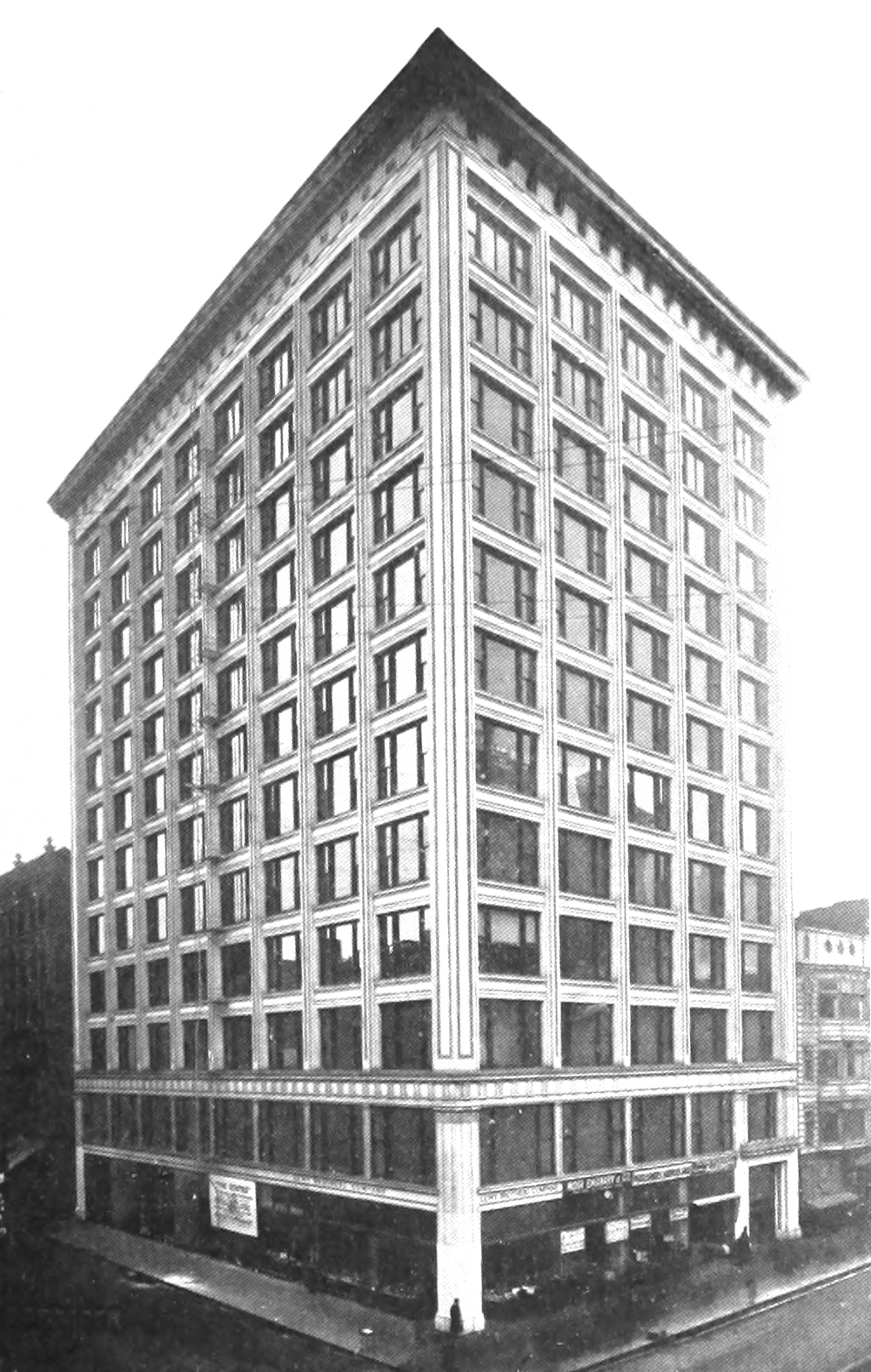 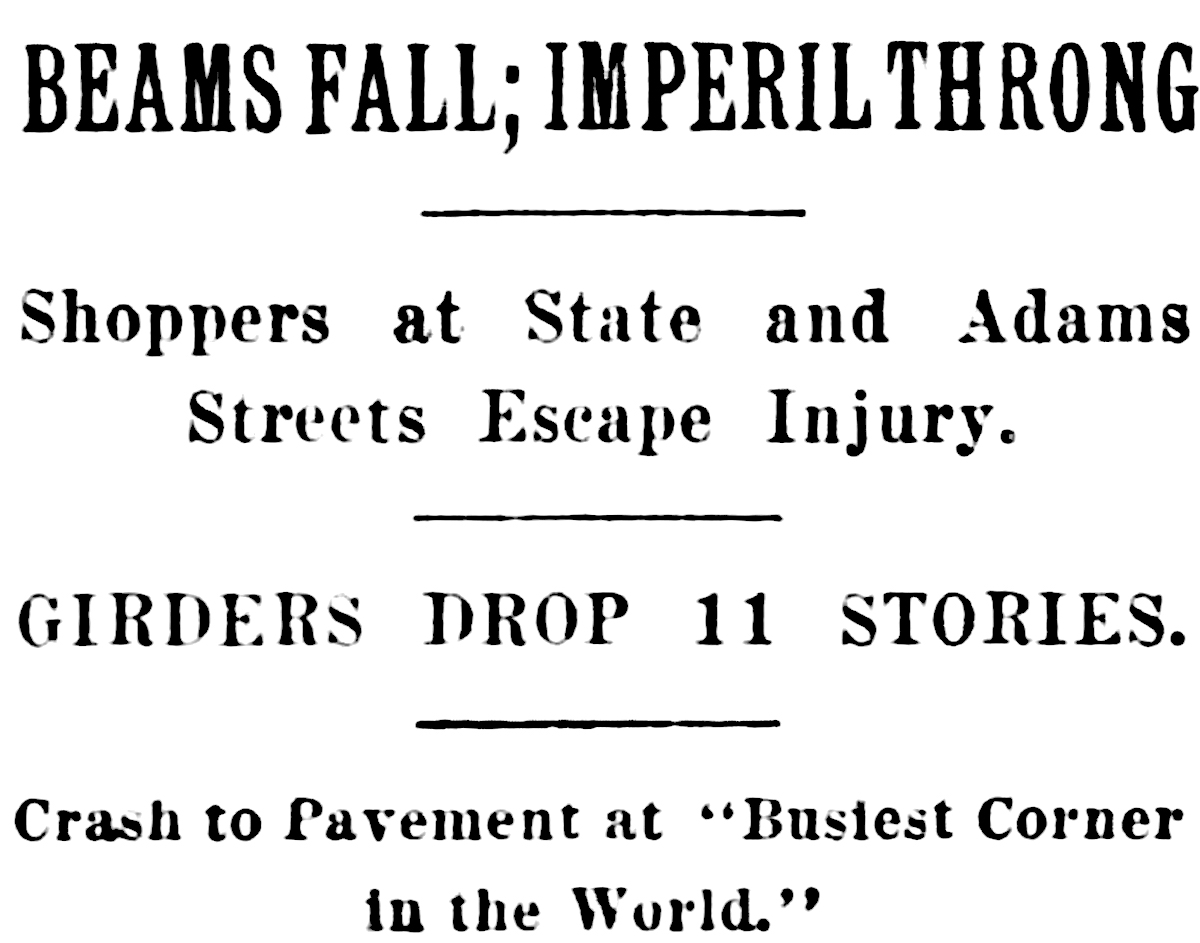 Scores of women shoppers, pedestrians, and drivers of vehicles had a most miraculous escape from death at State and Adams streets yesterday afternoon when five heavy steel girders which were being hoisted to the top of the Republic building, broke loose from their chain binding and crashed to the pavement seven stories below. The watchfulness of Sergeant Joseph O’Connell, stationed at the corner, and the warnings of a crowd of spectators prevented the loss of several lives.

The accident occurred at 3:20 o’clock when the corner at States and Adams streets, whic h has been termed “the busiest corner in the world,” was thronged. Carriages, automobiles, and wagons were passing in the street. Workmen engaged in the erection of several additional stories to the Republic building had fastened the hoisting chains from the giant derrick on top of the building about five girders each weighing nearly a ton. They had just been taken off a wagon driven by Nichols Knittle, 712 Grand avenue.

“Run, the Iron’s Falling.”
The signal to hoist was given, and Sergeant P’Connell and the crowd watched the mass of iron as it rose swiftly. When the mass was opposite the eleventh story it trembled and began to slip through the chains. Many women were passing on the sidewalk faqr below. Sergeant O’Connell saw the slow slipping of the mass through the chains and sprang forward.

“Get back quick,” he shouted, rushing among the pedestrians and shoving several women tumbling into the doorway of the store of Abel & Bach leather manufacturers, 48 Adams street. “Run! The irons’s falling!”

In the instant that the mass trembled the sidewalk below was cleared. Then it fell with a crash. A girder swerved inward and fell across a large electric sign in front of the leather store. The sign crumpled up like tissue paper and crashed through the plate glass show window. The girder tore a hole in the cement sidewalk. The other girders fell in the street, one of them falling between the horses harnessed to Knittle’s wagon, breaking the heavy pole and inflicting a long flesh wound in the breast of one. The falling iron ripped several holes in the wooden block pavement. The girders were bent into useless curves by the impact with the pavement.

Police Investigate Accident.
Several police officers at once went to the top of the building to investigate the cause of the accident which had endangered many lives. The construction work is being done by the A. & F. Wilson Construction company, F. H. Anderson, Chicago representative.

Both the building department and the street department disclaimed responsibility, although both immediately issued orders to prevent a repetion.

Edward Coutanche, representing C. D. Peacock, jewelers, across the street, went to the city hall immediately after the accident to complain.

Chief Clerk Fisher of the street department ordered the contractors to stop hoisting beams in the day time. 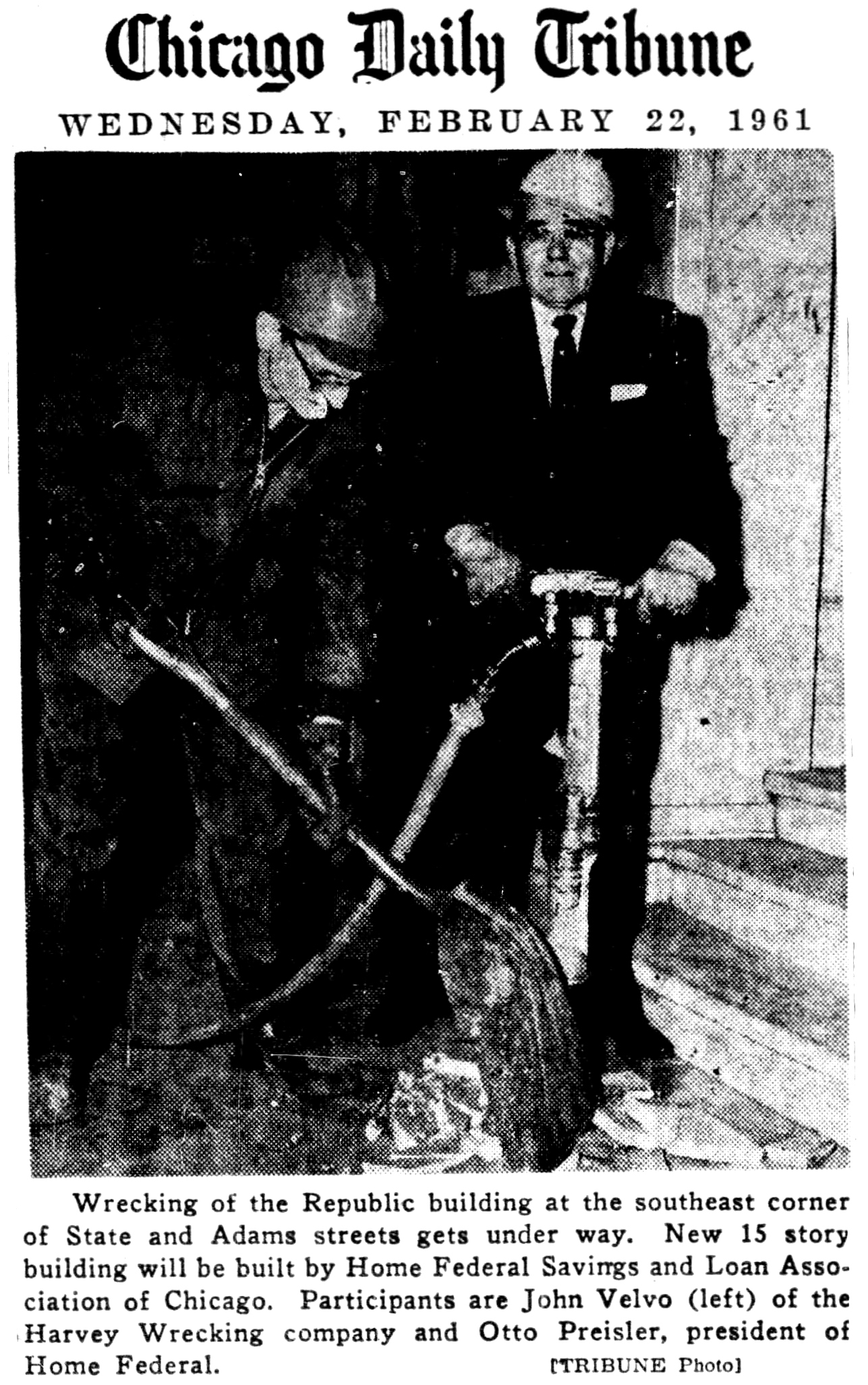 The Home Federal Savings and Loan association will save $300,000 on construction of its 16 story office building on the southwest corner of Adams and State streets thru the re-use of the caissons that supported the 19 story Republic building on the site.

Forty-four of the 53 caissons of Home Federal’s 6 million dollar headquarters are from the Republic building, which was razed earlier this year. The nine new caissons will be dug beginning Nov. 27.

“The re-use of these concrete caissons is important not only to Home Federal but to all other buildings which may be erected at some future date with caisson foundations.” said Otto Preisler, president of Home Federal.

Skidmore, Owings has & Merrill, the architect of the building may be a first in the construction of office buildings. The firm said that the Republic building, built in 1905, was one of the first office buildings to use the concrete caisson technique in foundation work.