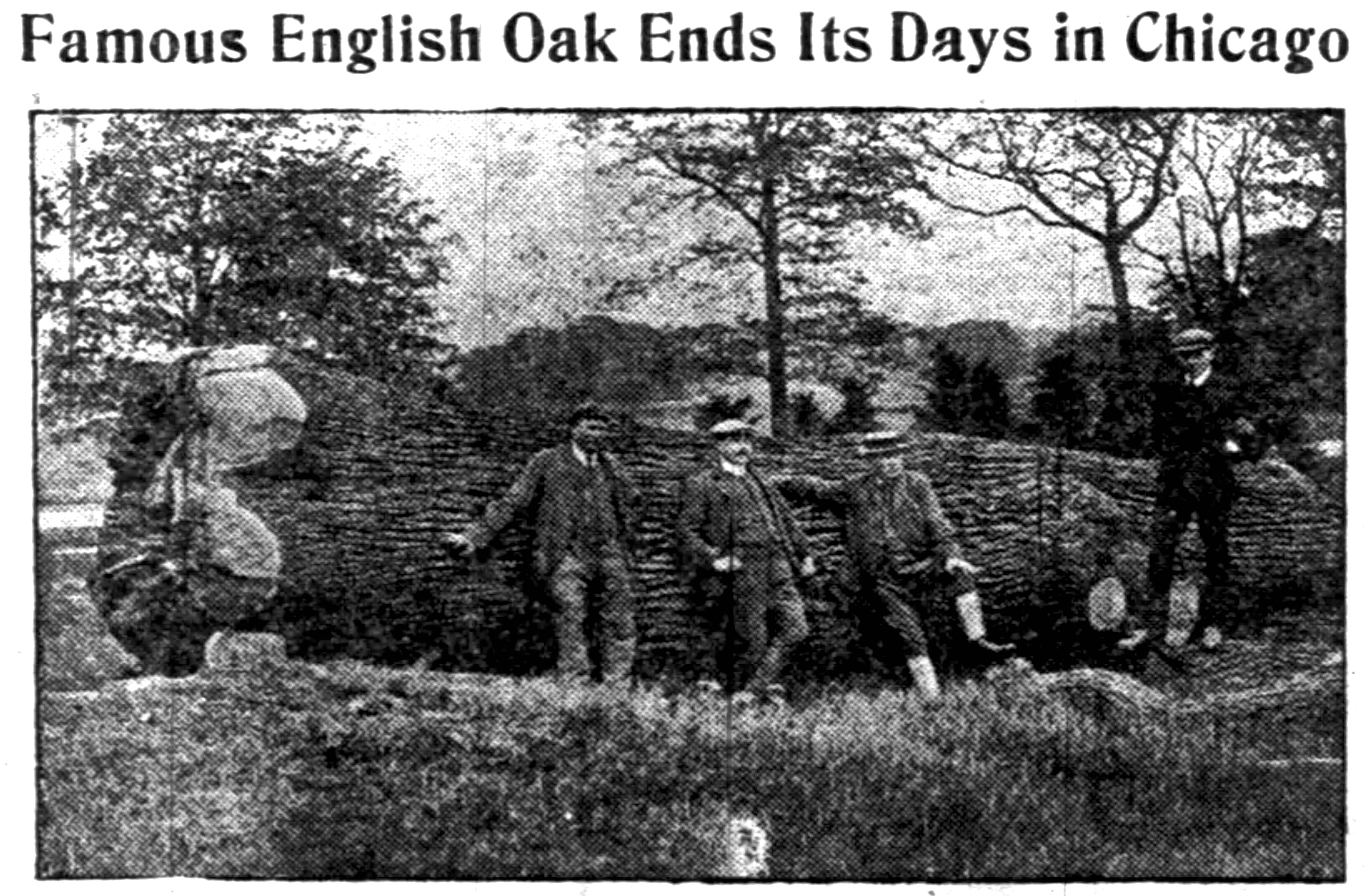 One of the most famous of the great oak trees of England has been brought to Chicago and made into buffet fixtures for a Chicago hotel. The oak is known as “Queen Jane’s Oak” and is supposed to be over 480 years old.

When King Henry VIII ascended the throne of England this oak was of historical importance and flourishing on the banks of the Themes near London. It is supposed to have been the trysting place, where King Henry with his courtiers met by appointment Gentle Jane Seymour and her ladies in waiting on that fatal day, when the booming cannon from the Tower of London announced to them that beautiful Anne Boleyn’s head had fallen beneath the headsman’s ax and that Henry was free to lead his third choice to the altar.

The ancient oak was sawed into logs for transportation to America. It had a diameter of full six feet at the base and was hollow only a short part of its length. The sap marks, by which the age of trees is determined, show that at the time of cutting, in the latter part of 1910, it was upwards of 480 years old.

This tree brought the present owners of the English estate a small fortune. After being carefully manipulated by skilled lumbermen the ancient tree produced many thousands of feet of most beautiful figured English oak veneer, an extremely rare wood. The tree was purchased and cut under the instructions of C. L. Willey, a Chicago manufacturer of fancy wood veneers. By him it was converted into veneer and finally found its way through the factories of the Brunswick-Balke-Collender company into the buffet fixtures of the New Hotel Planters of this city. 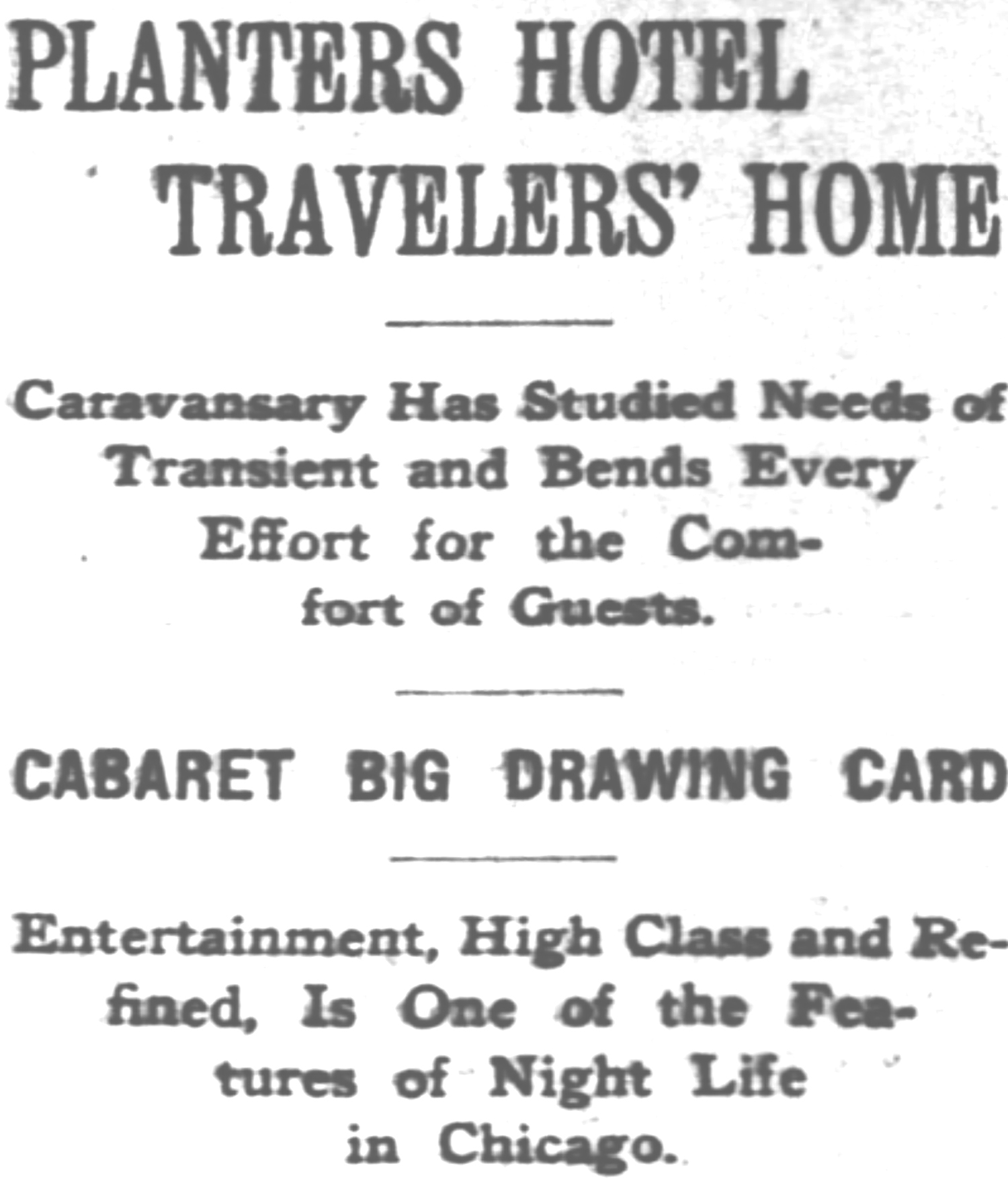 Chicago hotels have made it an ideal convention center and a city far famed for the excellence of its hostelries. One of the newest of these is the Hotel Planters, run in the European plan. In the midst of the rush and turmoil of the second city of America, it possesses a rare air of hospitality and welcome which justifies its boast of being “the Home for the Traveler.”

The Hotel Planters occupies a new and completely modern ten story building, absolutely fireproof throughout. Most careful and expert attention has been paid to every detail for insuring the comfort and convenience of guests. Every facility has been secured and every bit of equipment installed that was ever invented by painstaking hosts to please the most exacting patronage. Everything about the place is new and modern and the service is unexcelled. 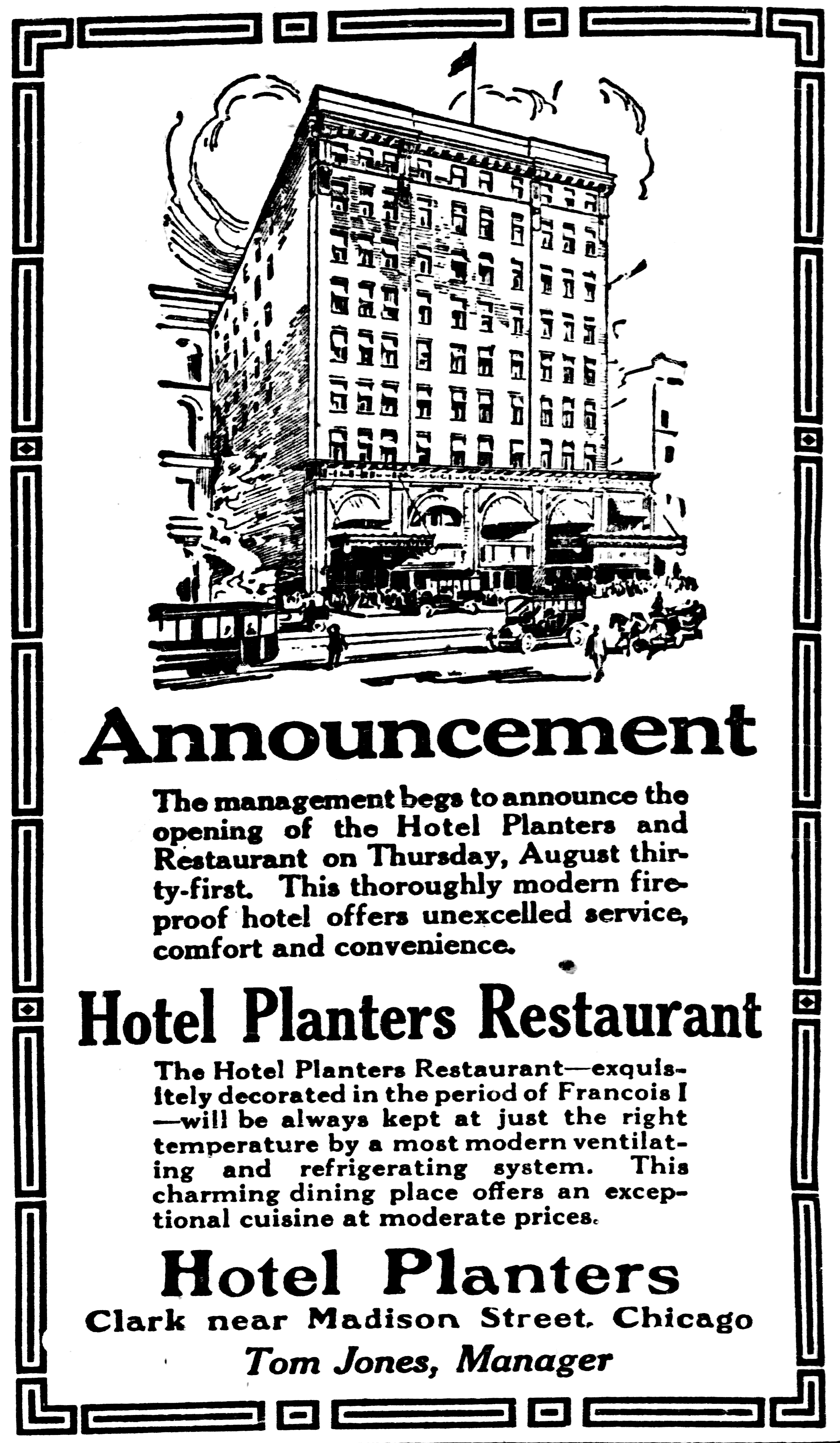 FINE RESTAURANT.
In connection with the Hotel Planters is one of the finest restaurants in Chicago. A feature illustrative of the management’s attention to every comfort-securing detail is the cooling system. This is one of the most complete and efficient refrigerating systems ever devised. The air for ventilating the rooms is first passed through water, thoroughly cleaning it of every impurity. It then passes over refrigerating coils, which reduce its temperature to about 70 degrees. Thus even on the hottest days of midsummer one is fanned by pure, cool breezes, allowing the enjoyment of a meal without the slightest discomfort.

But the superiority of the Hotel Planters restaurant does not alone rest in its being the coolest in the city. It is also unsurpassed anywhere for the excellence of its menu, its swift and attentive service, and, best if all, its moderate prices. And, in order that artistic surroundings may add to the fullest enjoyment of the meal, no expense has been spared to make this part of the hotel beautiful.

CABARET FEATURE.
One of the features of night life in Chicago is the cabaret entertainment in the Planters restaurant. No expense has been spared to secure the best musicians and theatrical folk, and the result has justified the expenses. During the evening and after the theater the beauty and fashion of the city will be found congregated here.

Whether he comes to Chicago bent on business or pleasure, the visitor will find the situation of the Hotel Planters ideal, since it is centrally located in the midst of the city’s activities. All the theaters and railroad stations are within a short radius, as well as the wholesale and retail business sections. It is almost the exact center of the busy district bounded by the L loop.

The comfort of the guests is further insured, so far as the personal element is concerned, by an especially able staff. The restaurant is in charge of Harry Martin and the tasty menus and excellent service testify to his ability. The manager, David Olmstead, has had wide experience in the hotel and allied firlds and is aided by an excellent corps of assistants, while the president, John P. Harding, gives his personal supervision to both hotel and restaurant. 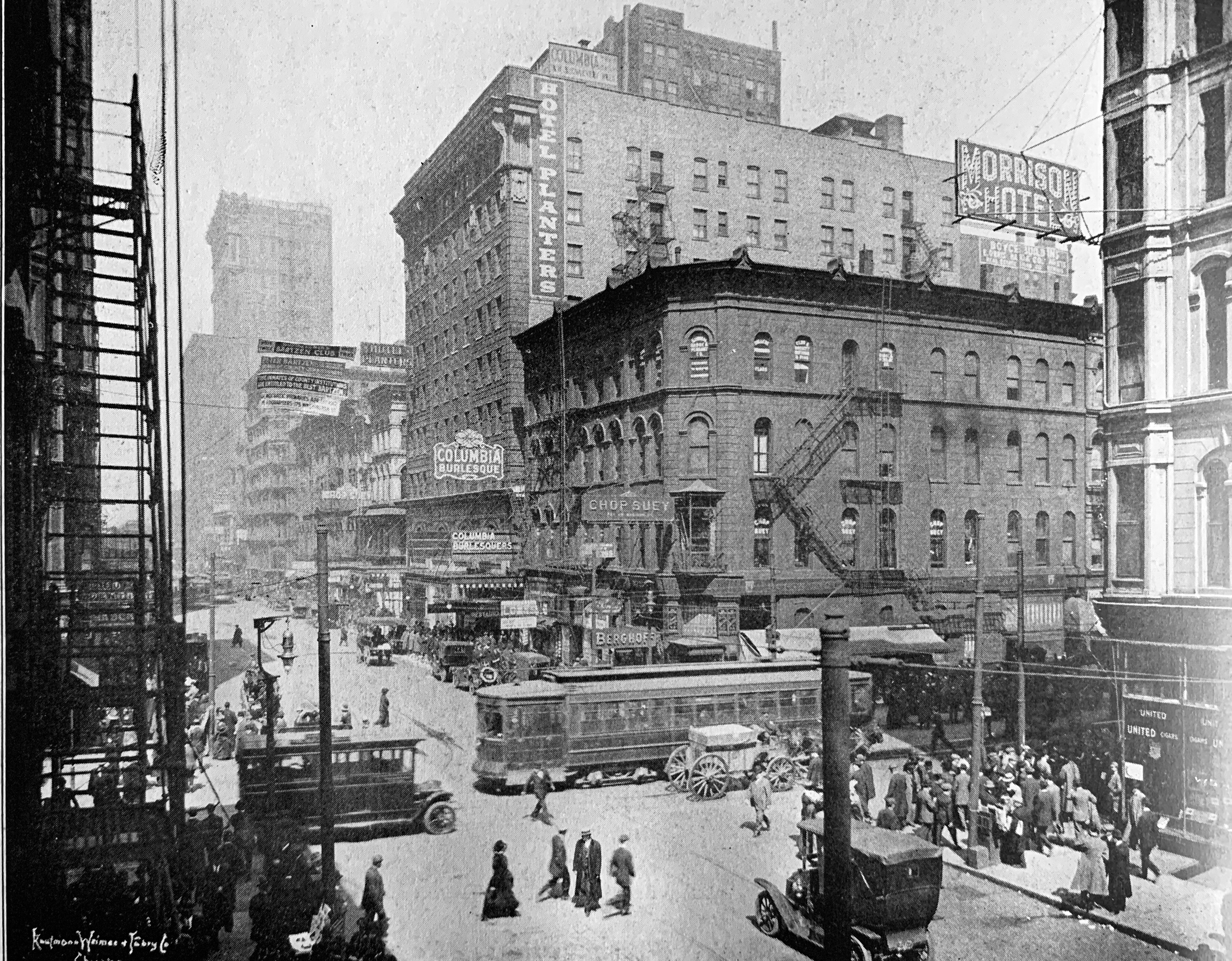 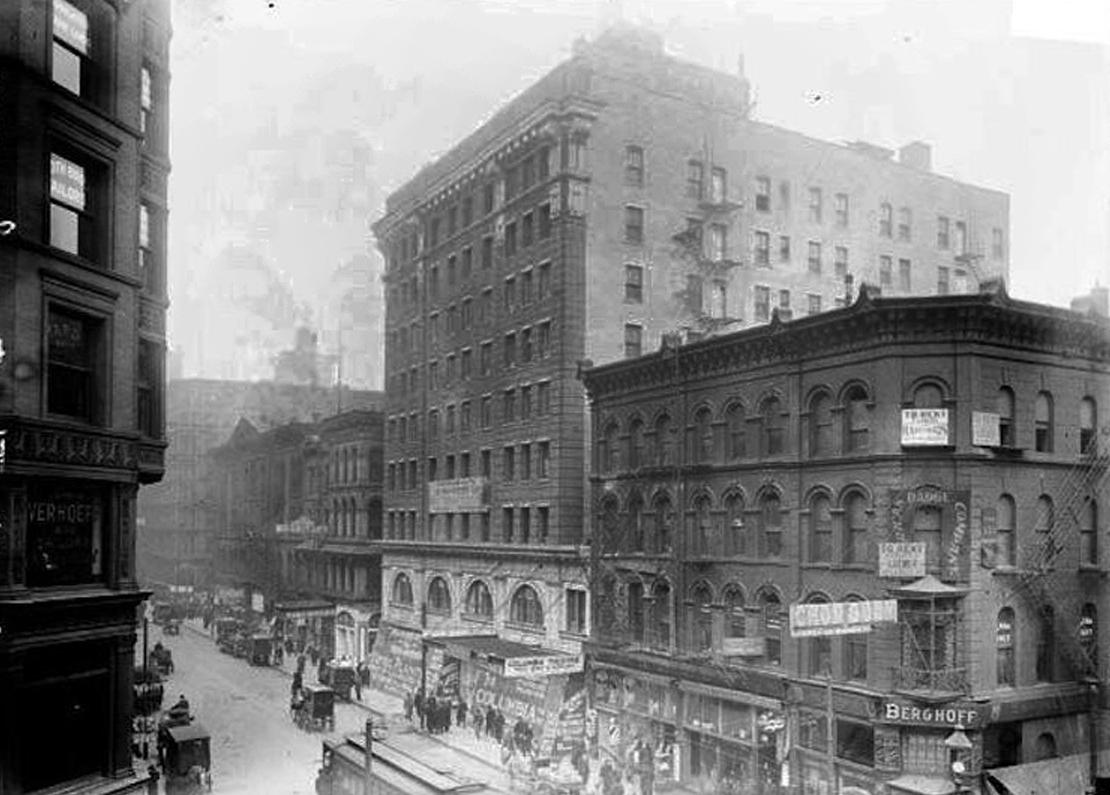 The Planters Hotel on Clark Street between Madison and Washington Streets. This shows also the old Columbia Burlesque House which, after thorough remodeling became the Clark Theater. About 1914. 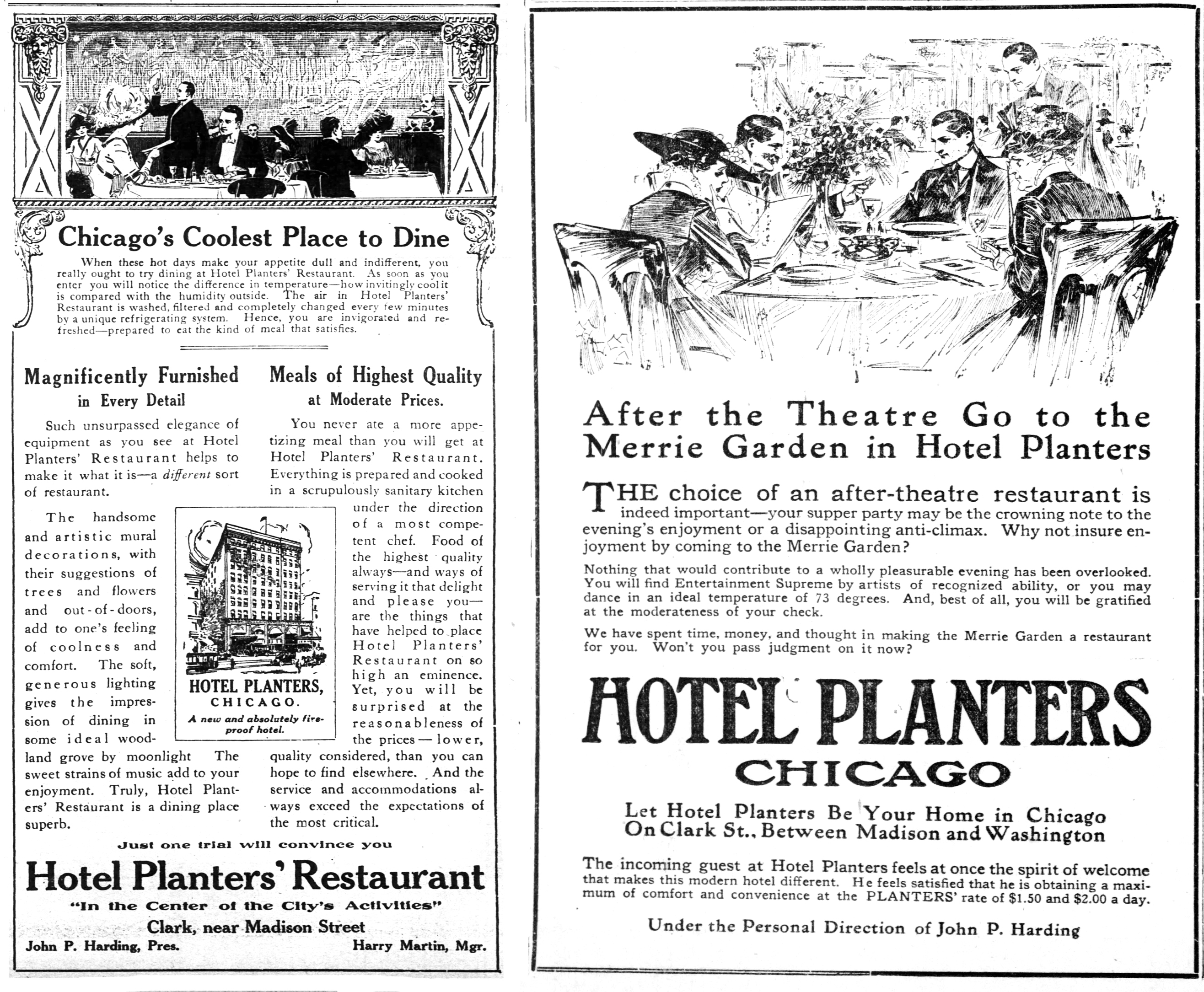 The old Planters Hotel at 19 N. Clark St. was always a bit of a floozy. There used to be a speakeasy downstairs where Al Capone entertained his friends. There were once some suspicious fires upstairs, and some suspicious deaths.

There were floods of couples checking in without luggage, signing the register as “Mr. and Mrs. John Smith.”

It is not unfitting then that the Planters is dying a pauper’s death, as little mourned as a sick, aged hustler on the skids. The few remaining residents were thrown out before Christmas, and recently a used-furniture broker was gathering the chipped dressers, the tacky lamps, the dirty magazines, and the Gideon Bibles.

The wrecking ball will be there soon. 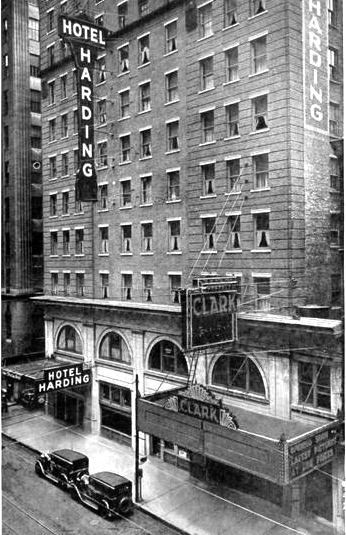 “This place must’ve been quite a joint in the’30s.” mused Patrolman Vince Tenuto, the policeman who walks the beat at Clark and Madison. “It was big once, but it’s been bad lately. Murders, narcotics, stuff like that. But in the old days it was something. Al Capone used to go there.”

That was the high point of a tawdry 64 years. If hotels could have police records, the Planters would have one as long as its fire escape. It was hardly finished in 1911 before it became known as a place for luggageless couples. In 1923 the Central District police captain posted an officer at the front desk to check identities of the middle-aged John Smiths and their flashy brides.

If it were illegal, it seemed, the Planters was doing it. The Oyster Bar was raided for selling booze during Prohibition, and the old Office of Price Administration fined it $1,155 for unpatriotic price gouging during World War II.

Things could only get worse.

The was a particularly shocking episode in 1956 when 16-year-old suburban high school girl was found dead, lying nude on a Planters bed with an empty bottle of gin nearby. Cause of death, the coroner ruled, was a heart attack. The 26-year-old man who had check in with her received a year in prison.

There were midnight fires, a suicide or two, and the Planters even got on the books for vote fraud. In 1968 precinct workers objected to 14 alleged voters on the rolls whose addresses were given falsely as 19 N. Clark St., the Planters Hotel.

The hotel’s last bit of notoriety came a little more than a year ago when somebody bludgeoned to death a 70-year-old widow in her $28-a-week room. Weeks later it was discovered the management, long after the old woman was dead and buried, had continued to collect the $28 room rent from a small fund she had established for that purpose.

All that will remain of the hotel building when the wrecking crew leaves will be the Clark Theater (featuring adult movies), Dino’s Steak House, and the Bamboo Room, which occupy part of the building’s lower floors. When their lease expires in two years, the owner, the First National Bank, is expected to level the whole area.

It’s not likely anybody will miss it. 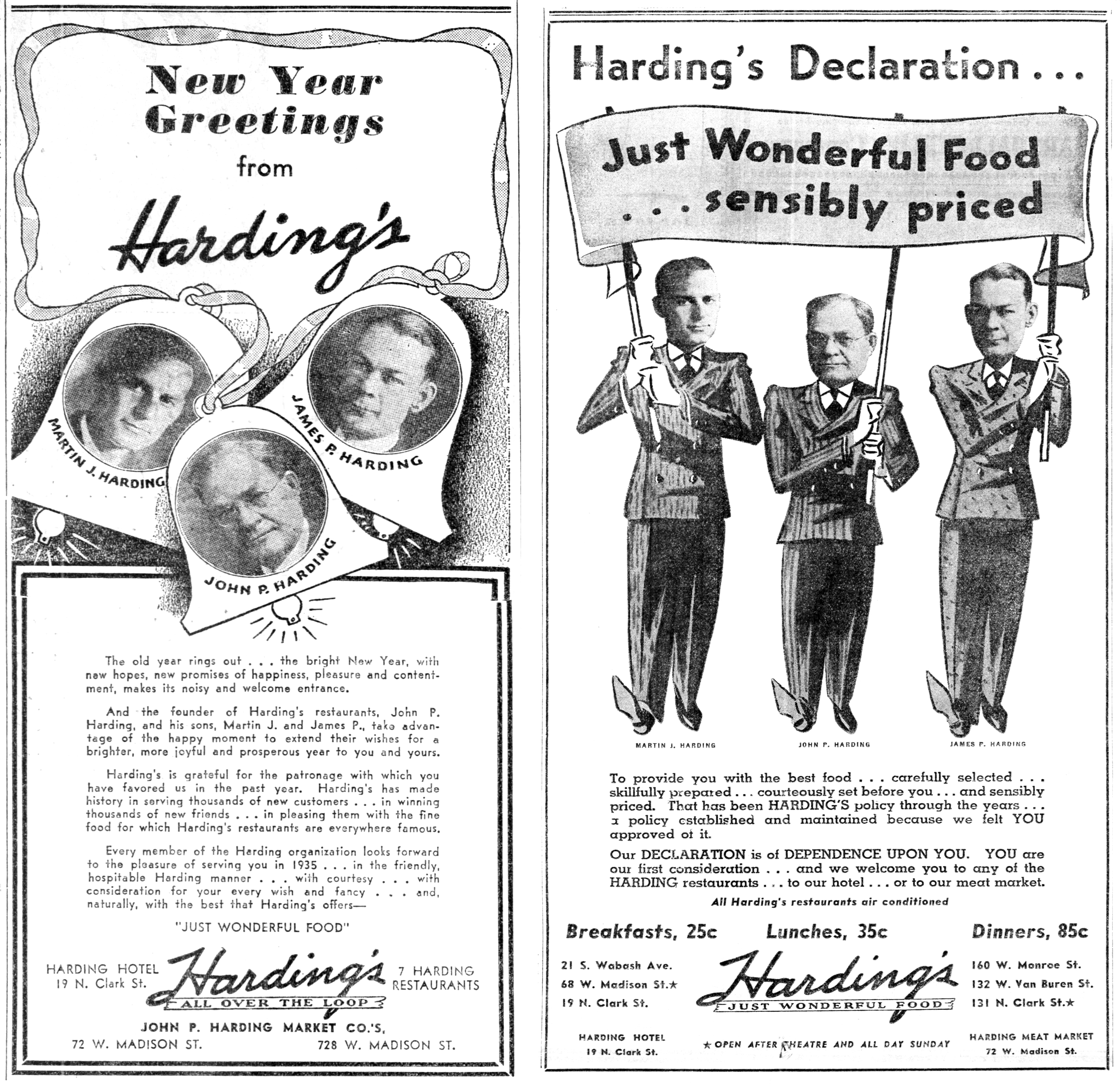 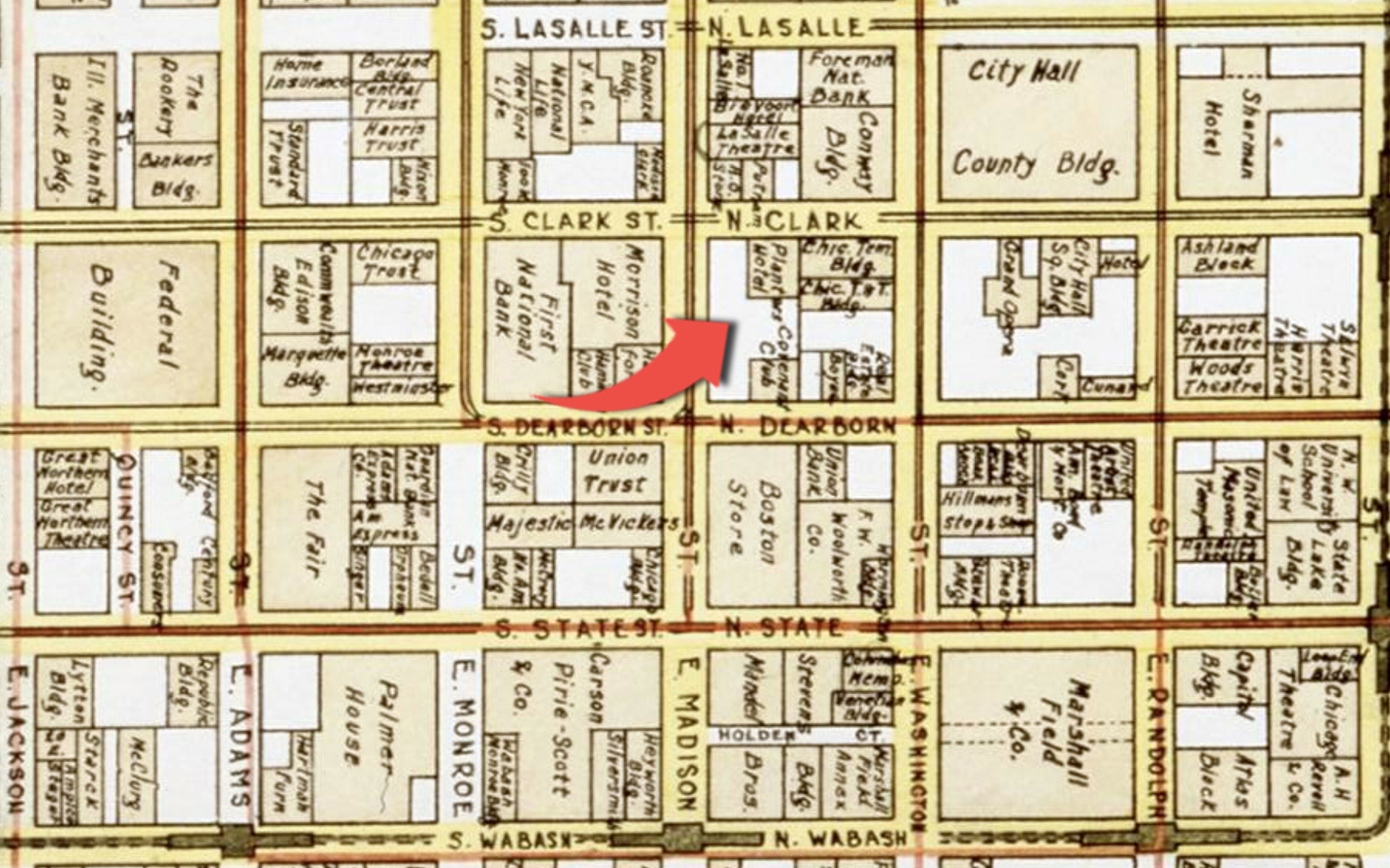