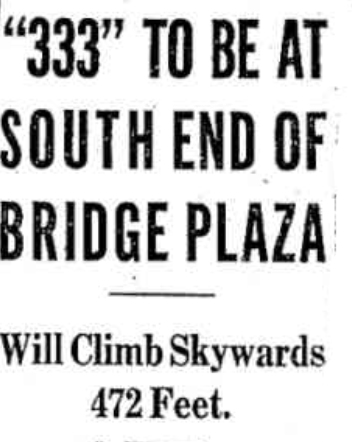 Work is to start on June 1 on the long talked of 472 foot tower building overlooking the southeast Michigan avenue bridge plaza, it was announced yesterday by John Root of Holabird & Roche, architects, who will be part owners of the tall structure, will design it, and will occupy considerable space in the upper floors. This will be the fourth major improvement on the outstanding sites surrounding the link bridge. Only the Kirk soap factory site remains unoccupied by modern skyscrapers.

As has been stated several times unofficially, but not confirmed till yesterday, the Women’s Athletic Club of which Mrs. William Sherman Hay is president, now in the Harvester building, will occupy considerable space in the new building. Leases are now being drawn whereby that organization will occupy all of the fourth and fifth floors, part of the sixth, and all of the ground level below the boulevard. This latter floor will be used for the club’s swimming pool and will be connected with the upper club quarters by two private lifts. The club will have a private entrance to the bridge plaza at the northeast corner of the building. 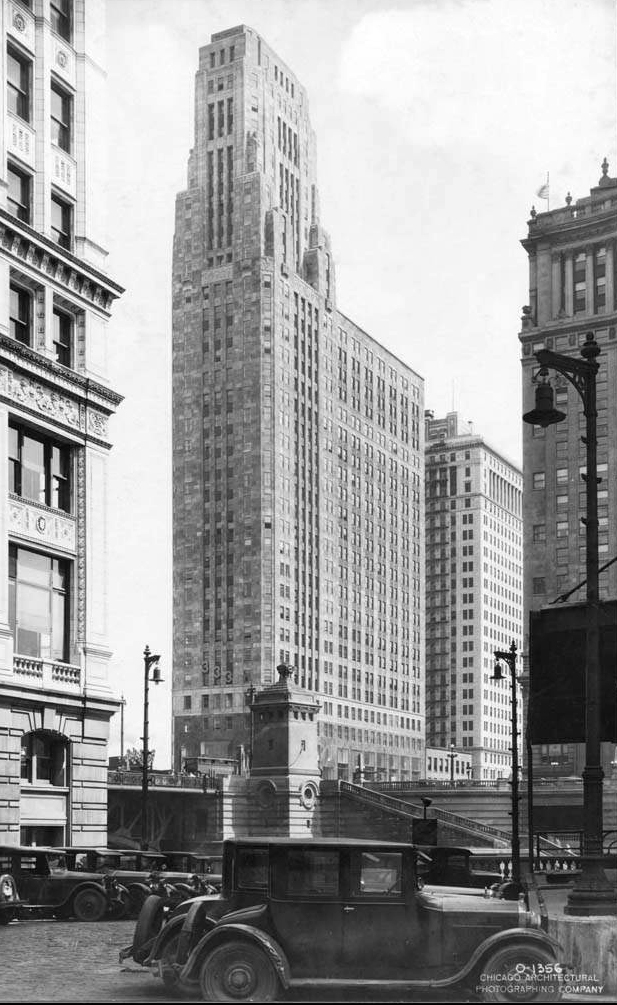 Formal Name Not Decided.
The club’s lease is for twenty years, with an option to renew for another decade. The terms have not been disclosed. Louis C. Sudley of McMenemy & Martin was the only broker.

Negotiations are under way with several large, nationally known corporations to lease space, and possibly name the building for one of them. At present it is merely called “the 333 North Michigan Avenue building.”

Contracts for the steel have been let, wreckers will start tearing down the old McLaughlin building within a few weeks, and the owners promise to have “333” completed by April 1, 1928.

The building will be unusual in shape, being only sixty feet wide and 200 feet long. This, it is claimed, will give a third more renting space than in the usual skyscraper. It’ll have a corridor down the center, with offices on each side, with windows on the boulevard and Beaubien court.

The main structure will be 265 feet tall, or twenty-four floors. Above this, at the north end of the building, overlooking the plaza and looking north along the boulevard, will be a 116 foot eight story tower, surmounted by a ninety-two foot pylon, making a total height of 472 feet.

This pylon is to be lighted with the same kind of tubular lights used on the Union Station. The plaza facade of the building will be flood lighted. The building is to be of shot cut Bedford stone of variegated hues. 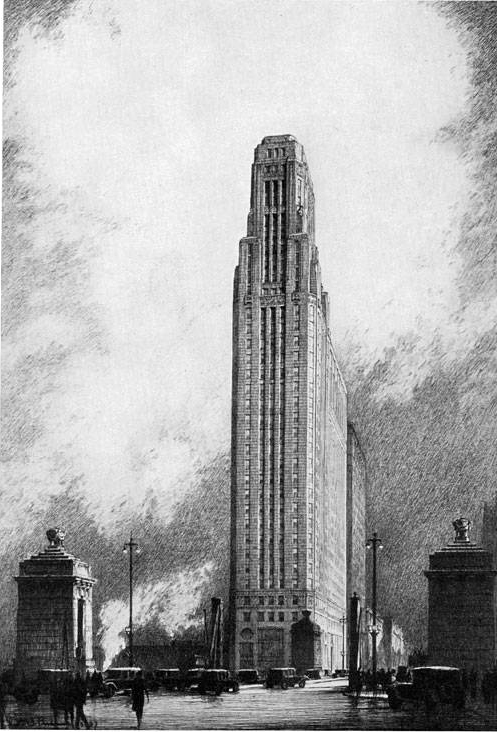 Elevators to Lower Level.
The first four floors will have an exterior of variegated granite. This will be the shop section of the building. The building will have ten elevators, two running direct to the top of the tower section.

It has been found that in the nearby Bell building 30 per cent of the tenants enter by the lower level, coming mostly from I. C. suburban trains. Consequently, “333” will run all its elevators to the lower level, where there’ll be a lobby.

Something new in Chicago skyscraper main lobby treatment is planned. Barry Faulkner is to make a mural decoration which is to be executed in mosaic. Mr. Faulkner made the murals in the Cunnard building in New York. The upper floors will be finished in American walnut and marble. 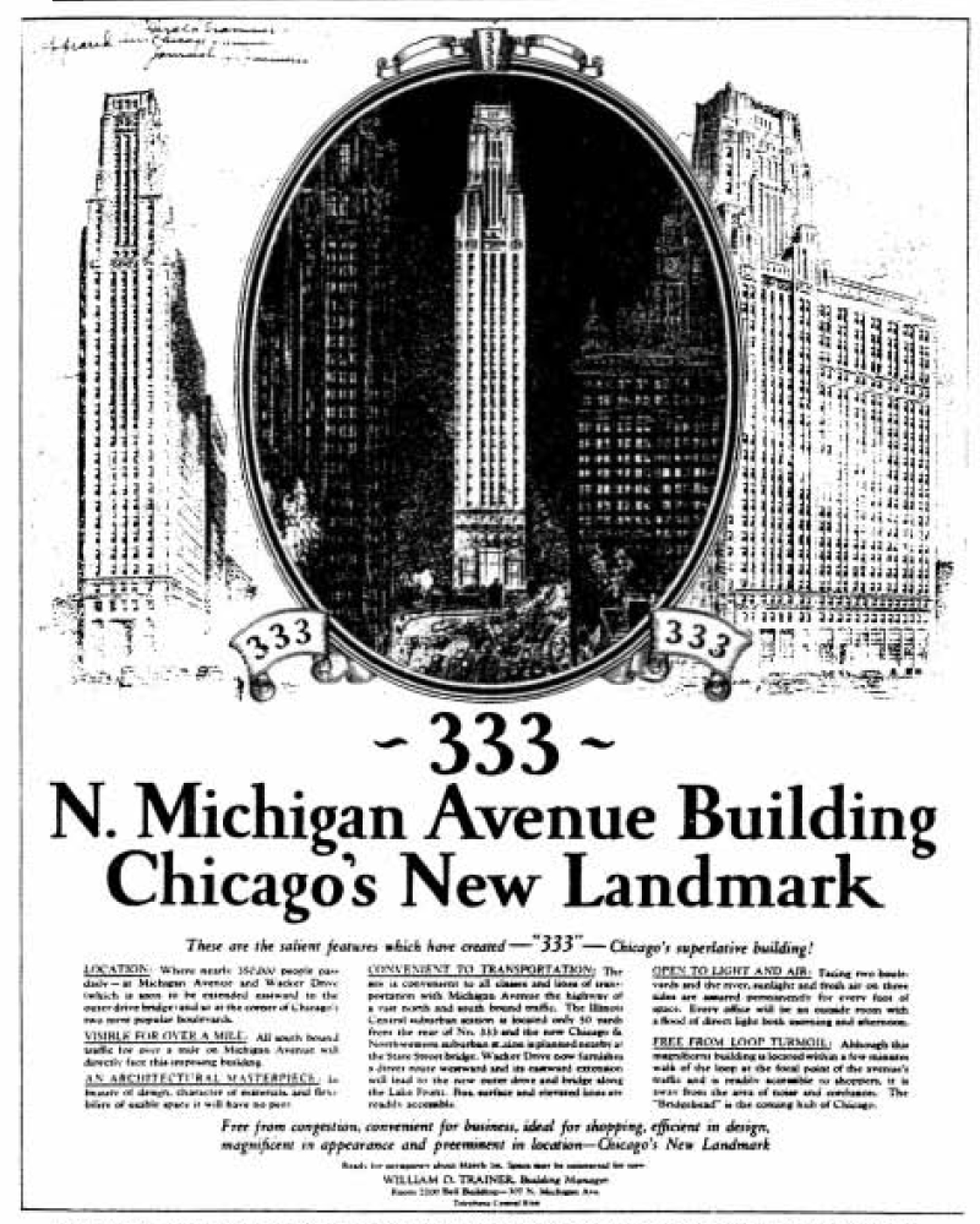 Total Investment of $9,000,000.
Holabird & Roche will occupy all of the 24th floor, part of the 25th, and, in addition, will have two stories in the tower for library and studio. Martin C. Schwab, consulting engineer on the project, also will have offices in the new building.

The owning syndicate is composed of Otto C. Doering and Jerome P. Bowes Jr., in addition to Mr. Schwab and Holabird & Roche. The Hegeman-Harris company, which has the contract, also is an owner. William O. Trainer is the renting agent of the building. He states there’ll be nine boulevard level shops in addition to others on the mezzanine, second, third, and fourth floors.

The total investment in land and building is placed at $9,000,000. The financing has been arranged for. 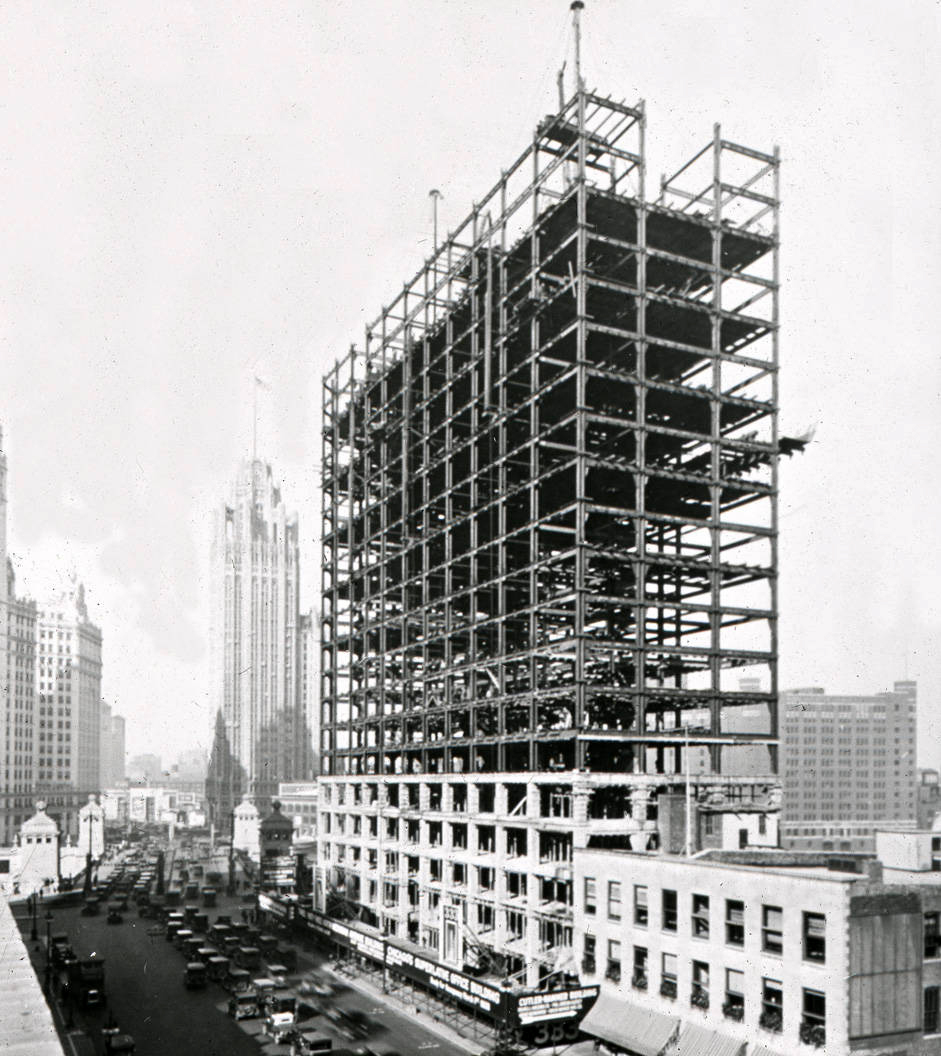 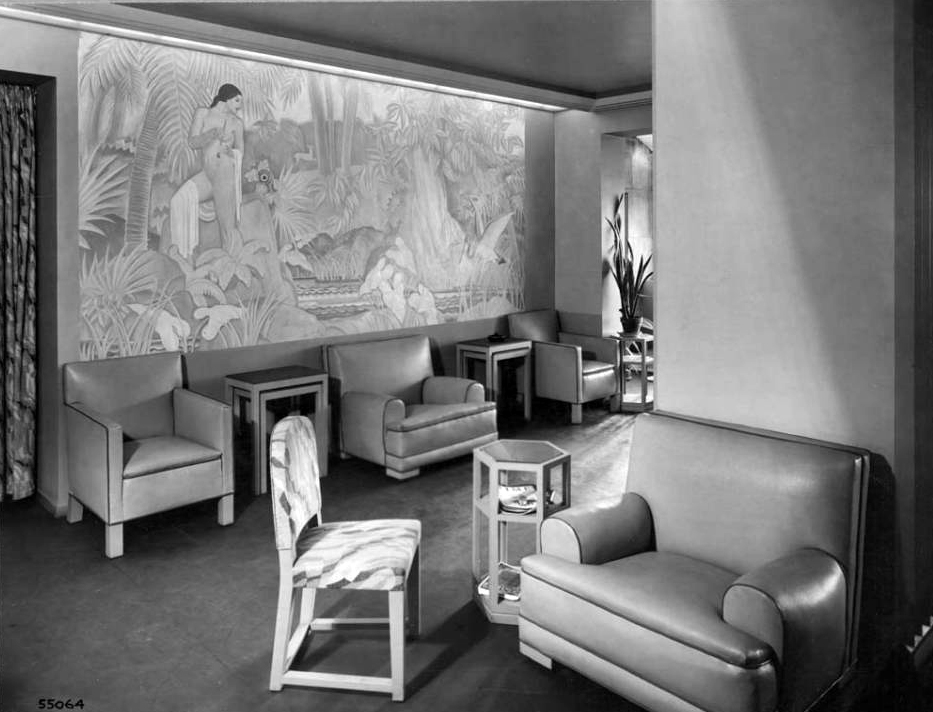 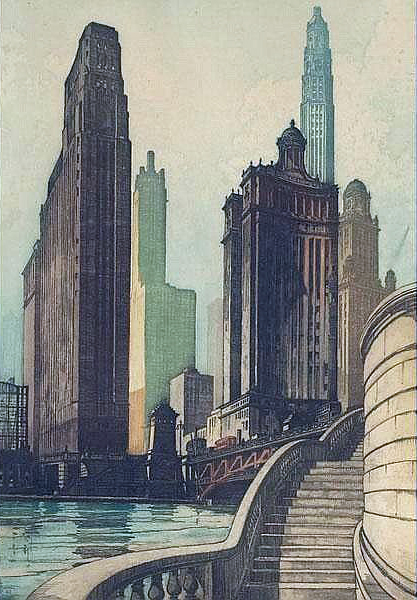 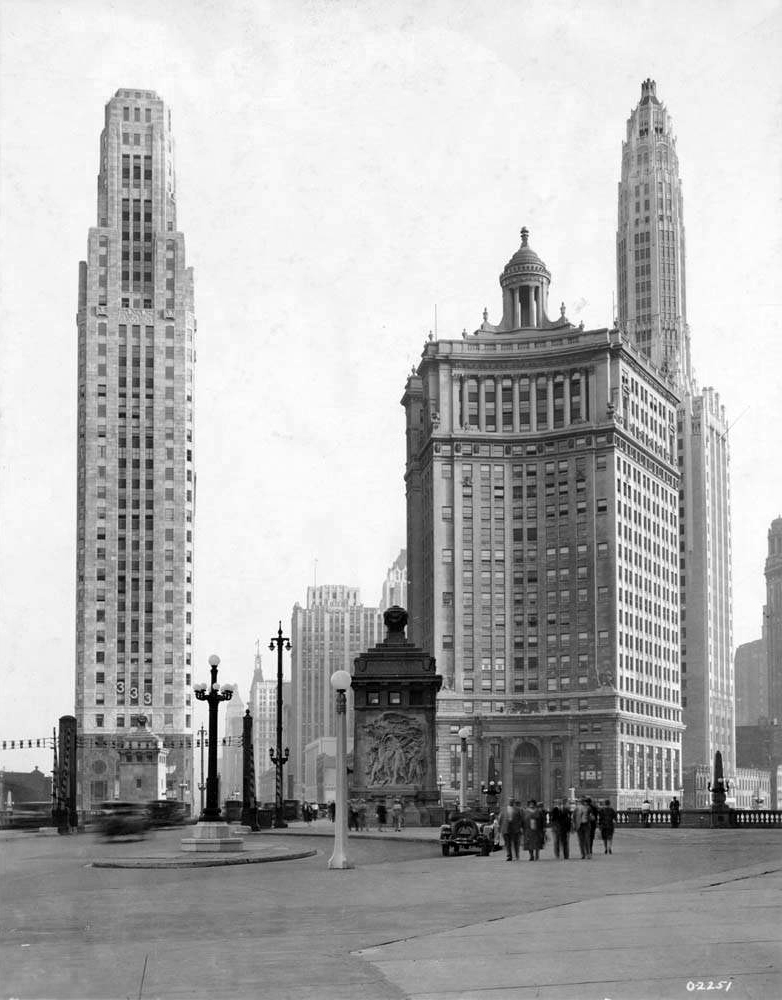 Yet just such a win is taking shape south of the Michigan Avenue bridge, where developers are pouring millions of dollars into two elegant 1920s skyscrapers and, in the process, returning the towers to their original glory.

These two gray eminences, the Art Deco 333 N. Michigan Ave. and the neo-Classical 360 N. Michigan Ave., guard the gateway to central Michigan Avenue and Millennium Park. The presence of the glitzy, outrageously large Trump sign, which New York developer Donald Trump plastered on his nearby mega-tower last year, only underscores their regal self-assurance.

So there is reason for optimism about the renovations, which are modernizing office and retail space at 333 N. Michigan Ave. and turning 360 N. Michigan Ave., originally an office building, into a hotel. Each building exhibits a new crispness and consistency, evident in such restored details as the striking, illuminated entrance at 333 and the gracefully tiered domed temple that crowns 360.

On Monday, contractors are expected to start erecting a steel frame for a sliver-thin, 22-story addition to 360. It will fill a once-vacant lot to the southwest that separated the tower from the rocket-shaped 75 E. Wacker Drive, another 1920s gem.

As Bonnie McDonald, president of Landmarks Illinois, a historic preservation advocacy group, put it, “There is a revival” at the corner of Michigan and Wacker.

It doesn’t hurt, McDonald added, that the developers — at 333, the Wirtz family, owners of the Chicago Blackhawks, and at 360, the Oxford Capital Group — are based in Chicago. Given the stature of these buildings — both are official city landmarks fronting the Chicago River — there’s intense pressure on the developers to do quality work.

“An absentee landlord does not have to stare their neighbor in the face,” McDonald said.

At the 22-story 360, which opened in 1923 as the London Guarantee & Accident Building, Chicago architect Alfred Alschuler draped an oddly shaped, steel-framed skyscraper in the language of Beaux-Arts classicism to great effect.

Its domed temple, ringed by Corinthian columns, perfectly answers the Spanish Revival clock tower of the Wrigley Building, across the Chicago River to the north. 360 is, above all, dignified, as though it were a civic building, not simply a commercial office tower.

Its designers, Chicago architects Holabird & Root, drew heavily from Finnish architect Eliel Saarinen’s influential second-prize entry in the 1922 Tribune Tower design competition. Continuous vertical lines and gentle setbacks mount to a top without a cornice or cupola. The building superbly takes advantage of a bend in North Michigan Avenue to dominate the view as you look southward.

Together, 333 and 360 join with the neo-Gothic Tribune Tower and the eclectic Wrigley Building to form an extraordinary quartet of 1920s skyscrapers that frame a great urban space around the Michigan Avenue Bridge. Yet the Chicago River separated them from North Michigan Avenue’s retail glamour.

The crowds flocking to 11-year-old Millennium Park, two blocks to the south, have changed that, transforming the stretch of Michigan Avenue between Wacker Drive and Randolph Street into a hot spot for development. Federal and local historic preservation tax credits have also been a lure.

Rocky Wirtz and the real estate arm of his Wirtz Corp. are putting $50 million into 333’s revamp. A venture led by the Chicago-based Oxford Capital Group and its CEO, John Rutledge, is spending more than $150 million on 360’s redo.

Chicago architects Goettsch Partners are responsible for both renovations, with principals Len Koroski and Michael Kaufman in charge of the design work.

The skyscrapers’ limestone skins have been carefully cleaned, revealing ornamental details obscured by decades of air pollution and grime.

Near the top of 333, for example, sentinel-like figures, sculpted in stone, stare down on passers-by. Intricate metalwork depicts the Roman god Neptune, picking up on the nautical theme evident in the building’s porthole-shaped windows. New storefronts exhibit a consistent Art Deco look, though several remain empty.

The most arresting touch restores 333’s original midblock entrance, which had been replaced by a recessed, modernist portal of metal and glass.

Now, a light-box lit from within by LEDs wraps around the front door, recreating a glowing entry that must have seemed novel in 1928. The lighting, which needs fine tuning to achieve the desired amber color, can be switched to red in the event of another Blackhawks Stanley Cup win.

“If you’ve got a winning team, you’ve got to help them celebrate,” Koroski said.

The project, which includes a two-level Blackhawks store that opened in October and refurbished office space, will be largely complete by May, according to Wirtz Realty Corp. senior vice president Don Vitek.

The rooftop temple, carefully rebuilt after decades of battering from the elements, is a delight to behold from street level. A new roof deck, its supporting steel framework already in place, will allow for close-up views. A shuttle elevator will provide access to the deck and temple.

The biggest shift, the 22-story addition, will be faced in metal and glass, with serrated window bays that contrast with the 1920s towers on its flanks. Designed by Goettsch Partners’ CEO Jim Goettsch, the addition appears to be a sensitive work of “in-fill” architecture, relating well to the proportions and visual rhythms of its neighbors without aping them.

360’s interior, now stripped to its fireproofed steel frame, will join with the addition to create a 452-room hotel that includes ballrooms, meeting rooms, a restaurant and shops. One important feature, the building’s ornate lobby, was meticulously restored by the same architects for a previous owner in 2001. Rutledge, who said he’s close to announcing the hotel’s name, expects a spring 2016 opening.

When that happens, one newly revealed historical touch above 360’s entrance — the name of the London Guarantee & Accident Building, which had been covered by a plaque advertising the presence of a previous tenant, Crain Communications — could disappear. A hotel, after all, would want its name there, and the prominent placement would be worth something.

The developers of 360 and 333 see the projects “as their commitment to the city to enhance the urban landscape,” said McDonald, of Landmarks Illinois. “By doing so,” she added, “they also benefit their pocketbook.”