Opening of the Majestic

Chicago has a new vaudeville theater, and it is a beauty, The Majestic, after eighteen months spent in construction, was opened to the public for the first time. The management claims for the new house that it is “the finest and most substantial theater in Chicago and the best structure for its purpose in the world.” The claim is a large one, but the facts in the case make it not easy to disprove.

The most that could be done probably would be to reduce the rank from the positively finest to the but slightly reduced degree of one of the finest, and even that would be a task as difficult as it were futile. It suffices that the Majestic is a theater of exceptional beauty, comfort, safety, and completeness.

It has been constructed under Chicago’s new building laws governing the erection of places of amusement—laws the most exacting to be found in any city in the world—and its observance of their every mandate has made it a model as regards security and commodiousness. Inasmuch as the esthetic has not been overlooked by the owners of the house, the blending of the utilitarian with the beautiful has been accomplished, and with remarkable success. It is a theater of which Chicago may with justice be proud, and to which the amusement seeking public may turn with confident anticipation of finding there a place wholly to its liking. 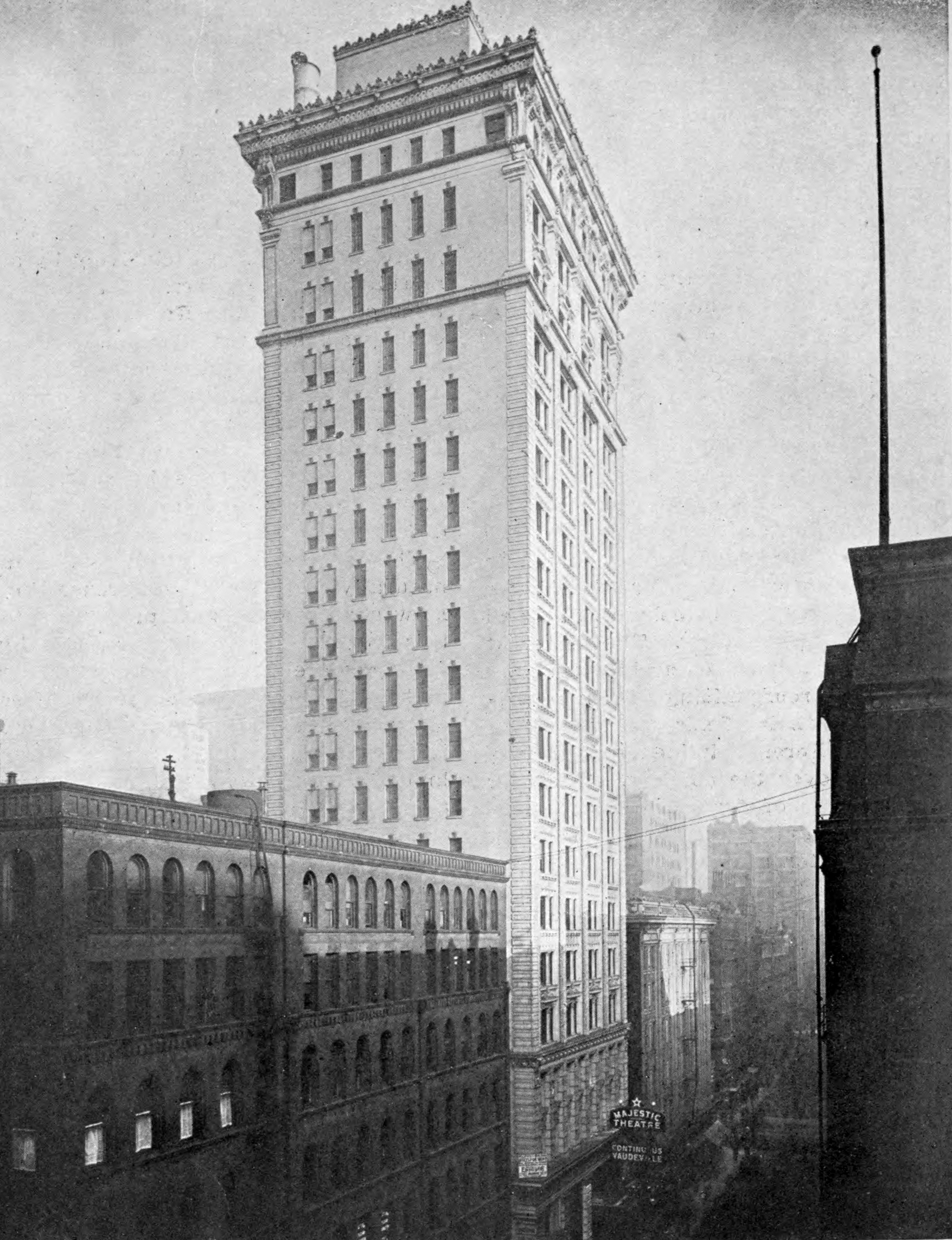 The interior of the new theater is attractive beyond the usual. The impression received is one of coziness and intimacy, despite the largeness of the room—the seating capacity is greater than that of any other playhouse in town except the Auditorium. The lower floor has a breadth and a sweep of line which suggest comfort and east, the new mezzanine and the balcony proper are brought far enough forward to make the stage seem close at hand, and the gallery is the finest in arrangement and fittings that is found in any theater in the city.

The mezzanine is a novelty in American theater arrangement. It consists of a shallow balcony immediately over the back of the parquet. In the Majestic it is fitted with two rows of boxes and two rows of seats in the rear. Thirty private boxes are thus provided, and with the twenty-four proscenium loges gives the theater an unusual total of fifty-four boxes. The patrons who wish a certain exclusiveness in location will find no scarcity of accommodation in the new home.

The decorative scheme of the auditorium is in rare good taste. Old gold and ivory have been used on all the elaborate plaster work which faces the proscenium arch and the framework of the boxes and the panels and wall spaces have been covered with old rose or with mural paintings.

The entire color scheme is exceptionally harmonious and beautiful. In the foyer on the lower floor old rose, soft gray, and olive greens have been used with admirable effect, and in this promenade have been placed a dozen paintings by master artists—Bouguereau, Jacquet, Roybet, Clairan, Corcos, Ridgeway, Knightm Bergen, Baxter, Chica, Detti, and Gaston being among those represented. 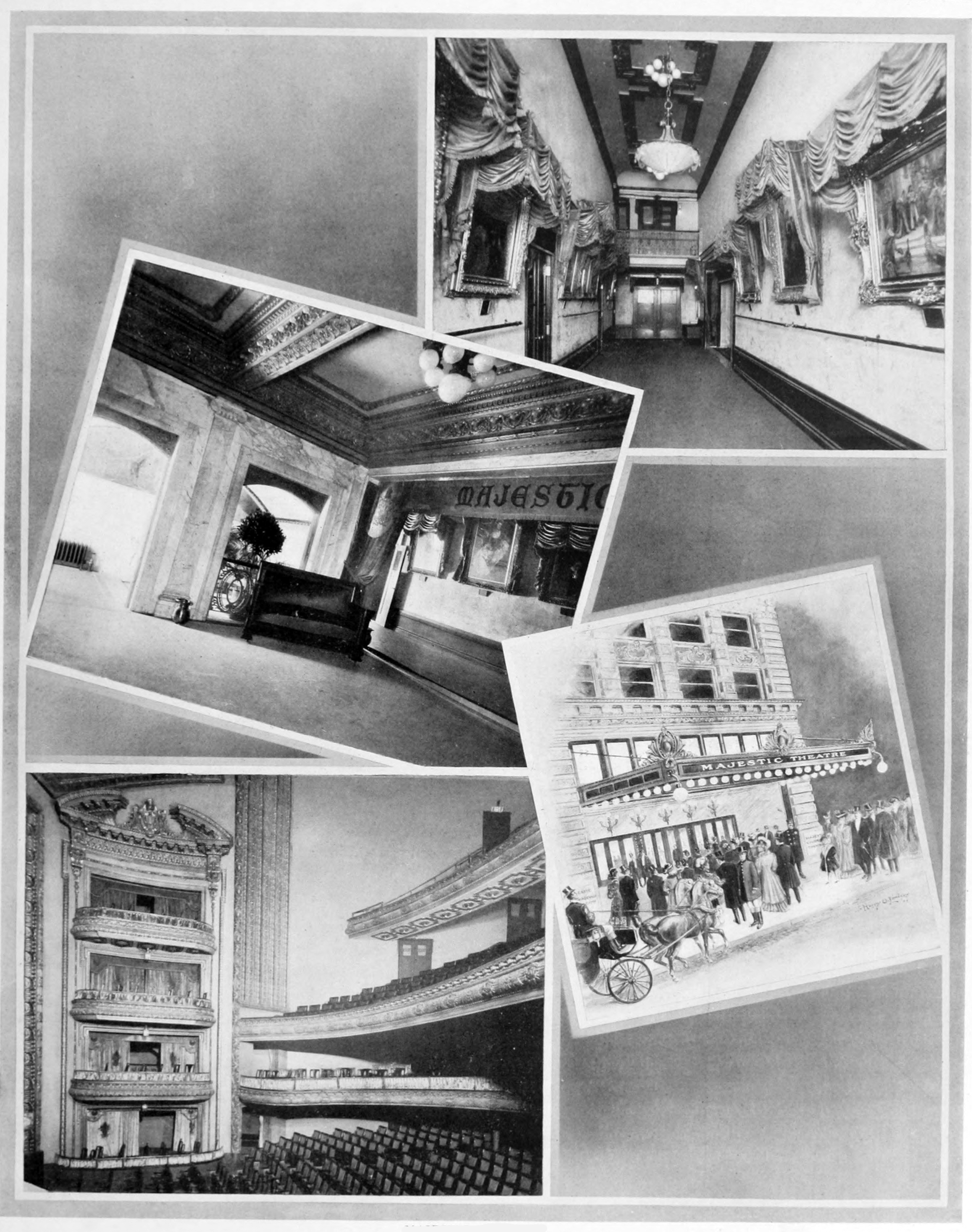 From the marble corridor which leads into this handsome foyer descent is made on one side to the men’s smoking room, and on the other to the women’s resting room. The smoking room is fitted up in nautical style, the woodwork, seats, and decorations all being similar to those found in a “smoker” on board, a first class ocean liner. Even the portholes, with view of the sea, are not lacking.

In the women’s room heliotrope, white, and lemon gold are the colors used in decoration, and they make the little parlor a veritable gem as regards beauty and comfort. Upstairs at the rear of the main balcony a promenade even large than the one on the main floor has been provided. It, too, is furnished in old rose, attractive paintings adorn the walls and every comfort in the form of chairs, sofas, and lounging places has been provided.

The stairways are of marble, iron, and brass, are wide and easy, and are provided with a double handrail in the center, which divides the crowd and assures safety. Safety as well as comfort clearly has been the constant watchword of the builders of the house. Exits fairly line the side walls of the auditorium, and the location of the building, with alleyways on both sides and at the rear, makes direct egress into the open possible from all parts of the house. 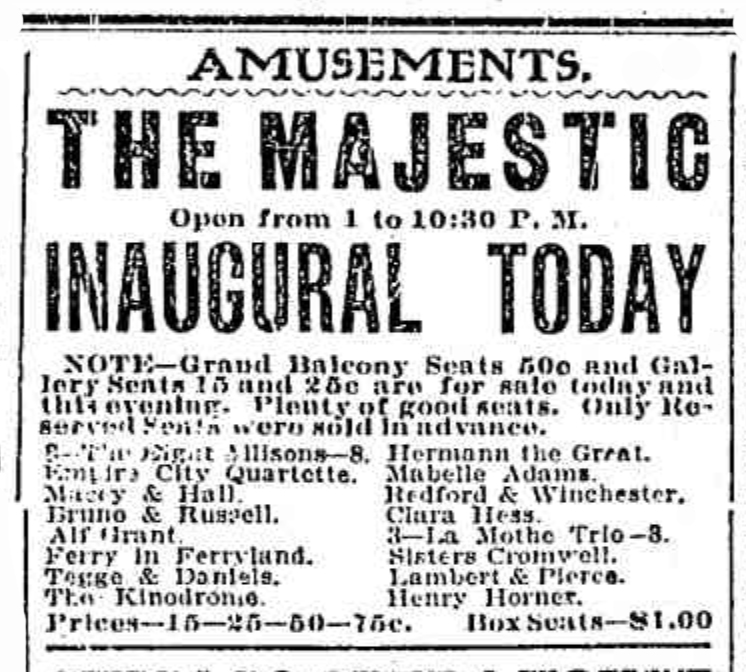 Behind the footlights the same completeness and comfort that characterize the auditorium and foyers are in evidence. The dressing rooms are models, the stage is one of the largest and best equipped in the country, the supply of scenic sets and of stage furnishings is astonishingly abundant, and the fireproofness of everything is subject for admiration and commendation.

The opening bill at the theater is an attractive one. The eight Allisons, who head the list, are a family of acrobats from Europe who offer one of the most sensational and daring acts of its kind ever seen here. Herrmann “the great,” contributes an entertaining series of tricks of magic and sleight of hand, the Empire City quartet does some singing of a comedy variety, Macey and Hall are seen in Clay Clement’s comedy, “A Timely Awakening,” Mabelle Adams contributes several violin solos, and acts are presented by Bruno and Russell, singers and dancers; Alf Grant, entertainer; Redford and Winchester, jugglers; Clara Hess, vocalist; Ferry in Fairyland, physical trainer; Tegge and Daniels, comedians; the La Mothe trio, and Lambert and Pierce. 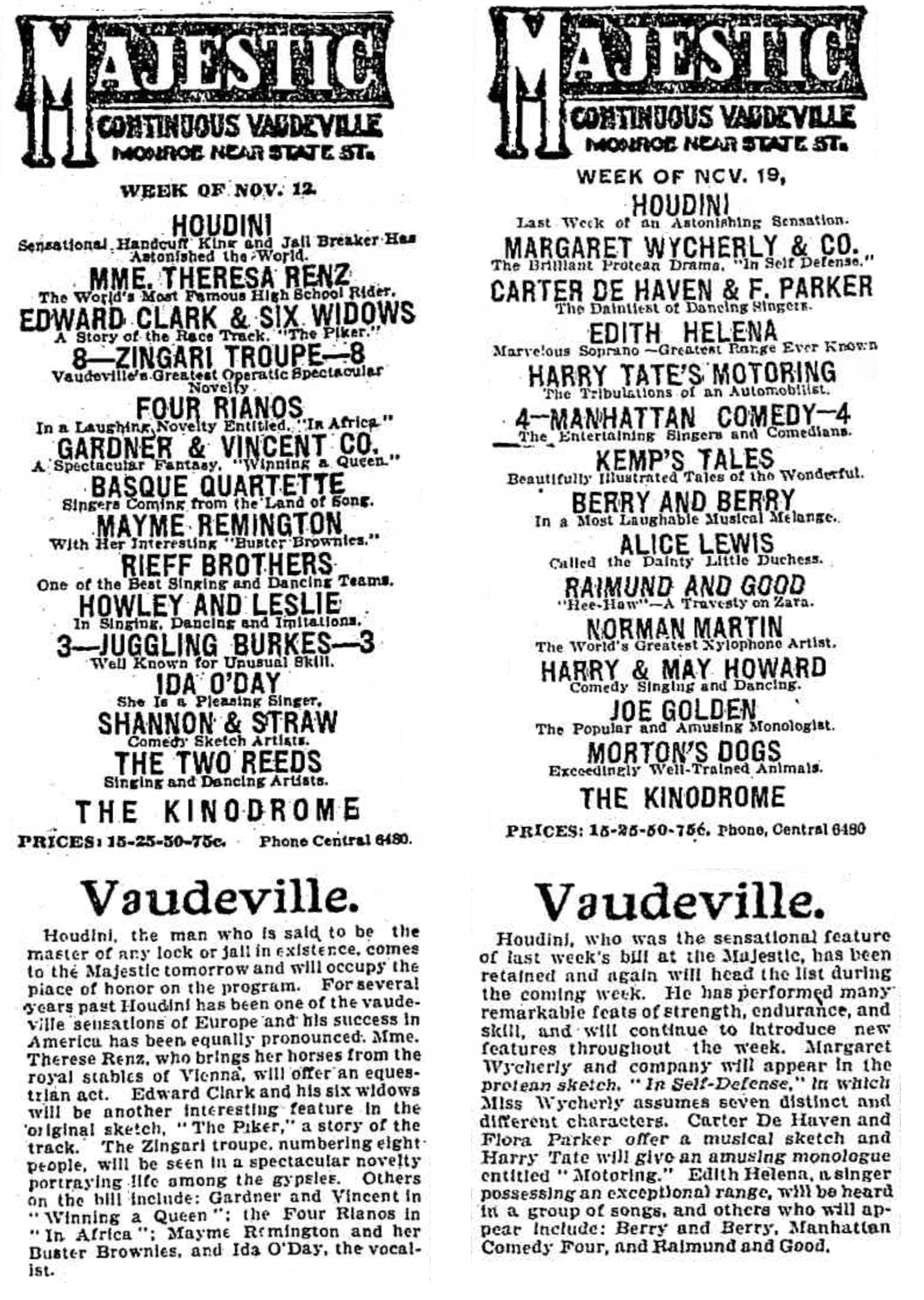 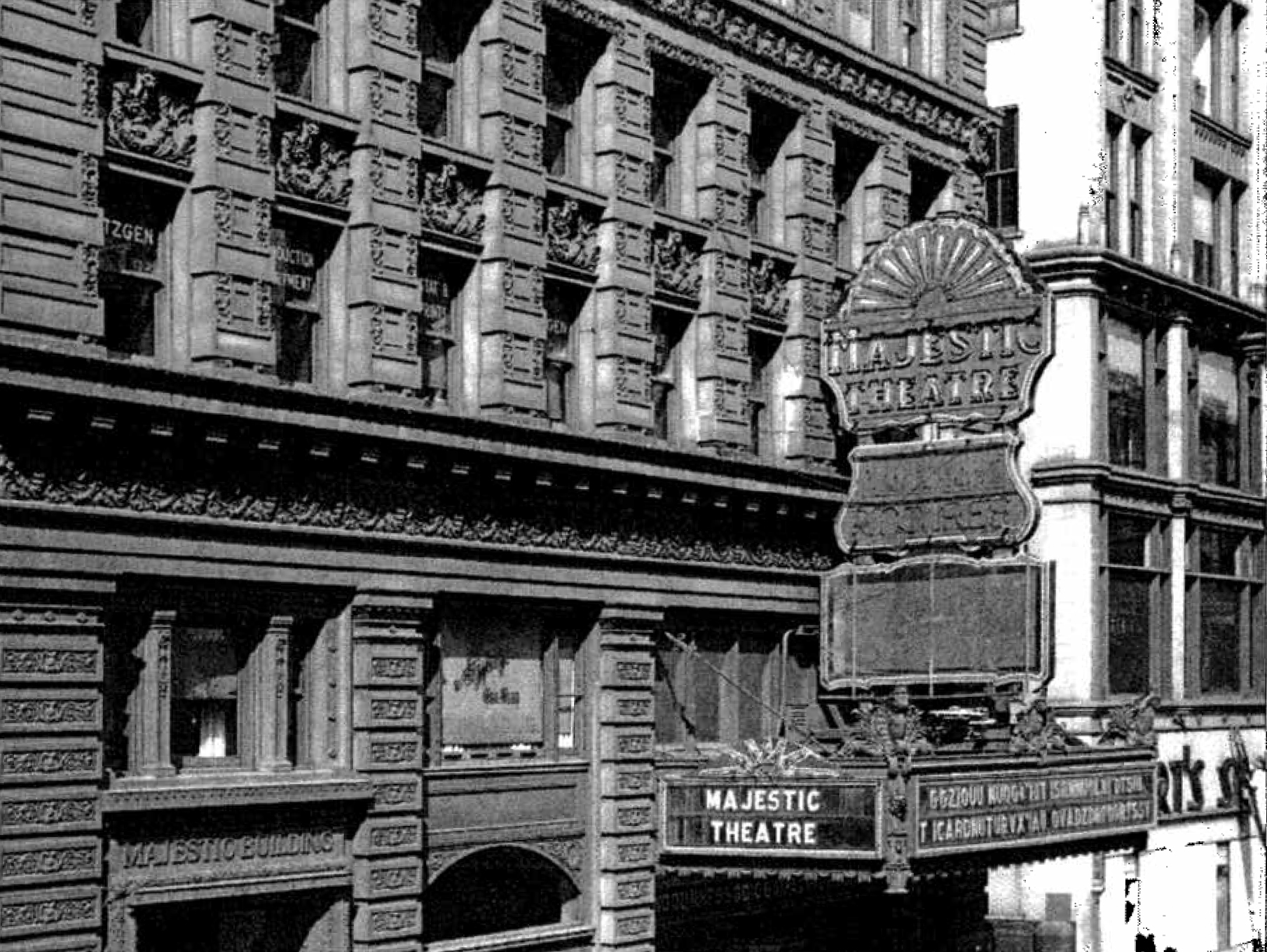 The Majestic Theater Marquee
About 1930 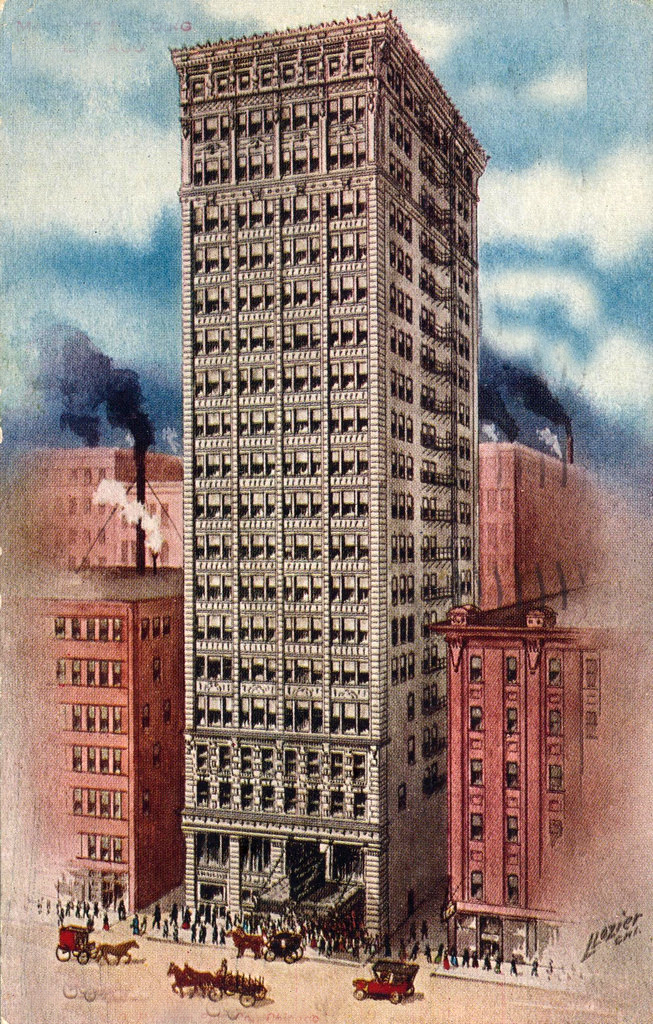 From Broadway in Chicago 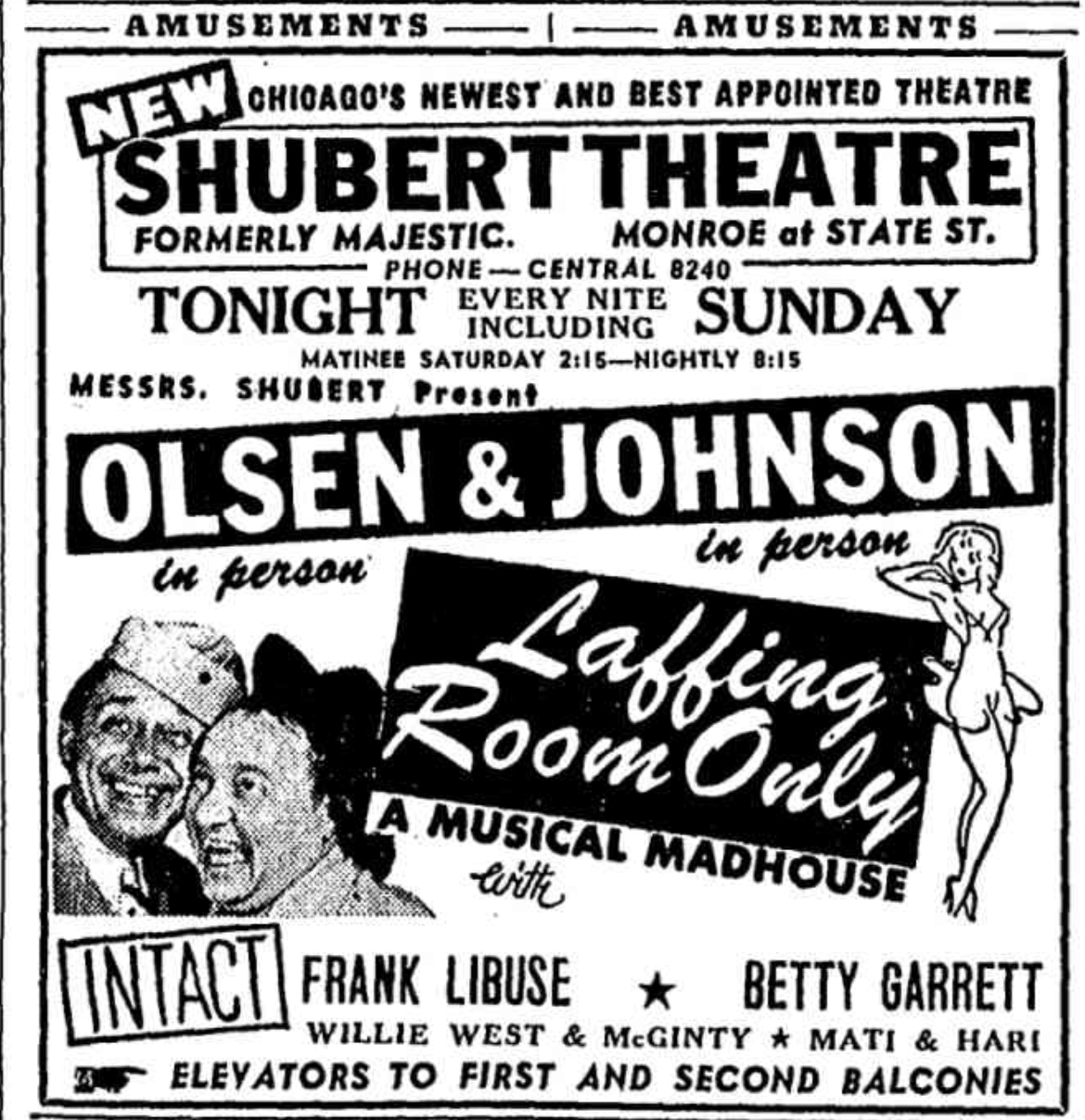 The Majestic Building, the tallest building in Chicago when it was first built, became a Chicago landmark, and the theatre instantly became a popular destination for vaudeville acts. In the 1920s, it became part of the famous Orpheum Circuit and host to legendary luminaries Harry Houdini and Lily Langtry. In 1932, during the Great Depression, the Majestic closed its doors and remained empty for 15 years.

In 1945, the theatre was purchased by the Shubert Organization and reopened as the Sam Shubert Theatre. The venue was restored and redecorated, although much of the original design was retained. The Shubert stage became home to an astounding array of classic plays and musicals such as CAROUSEL, SOUTH PACIFIC, GUYS AND DOLLS, THE KING AND I, MY FAIR LADY and A CHORUS LINE. In 1991, the Nederlander Organization purchased the Majestic Building from the Shubert Organization. The Shubert continued to host a wide array of quality theatrical productions, including the Chicago premiere of RENT, CHICAGO—THE MUSICAL, CABARET and the Pre-Broadway engagements of THE GOODBYE GIRL and Julie Andrews in VICTOR/VICTORIA. Since the formation of Broadway In Chicago in 2000, the rich history of exceptional entertainment has continued with the Pre-Broadway World Premieres of Billy Joel and Twyla Tharp’s MOVIN’ OUT and MONTY PYTHON’S SPAMALOT. In 2005, the theatre closed for a glorious multi-million dollar restoration and was reopened in May 2006 as the LaSalle Bank Theatre, and later the Bank of America Theatre in 2008. Since that time, the venue has hosted the long run of the musical phenomenon JERSEY BOYS, the Pre-Broadway World Premiere KINKY BOOTS, and the Broadway Blockbuster THE BOOK OF MORMON.

At a press conference on December 8, 2015, Broadway In Chicago and The PrivateBank announced a dynamic partnership that is committed to bring the best of Broadway to our Chicago Theatre District. The PrivateBank Theatre officially opened with the production of CABARET, on Tuesday, February 9, and is now the new home of Broadway’s biggest hit, HAMILTON. 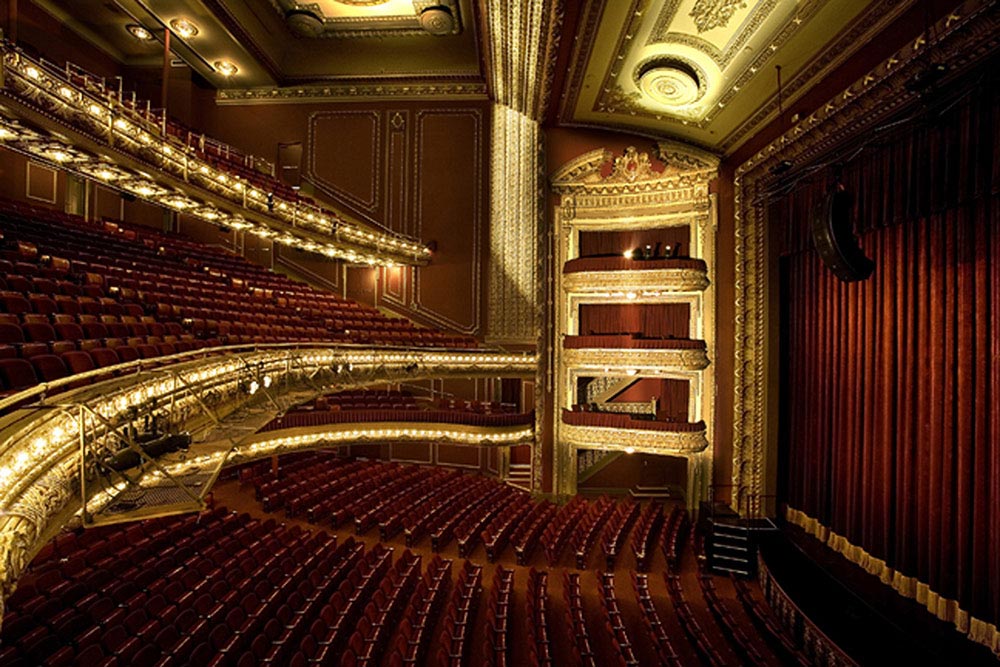