The first building Sprague Warner & Co. occupied was at 14 State Street; from this they moved in 1866 to Nos. 9-11-13 Wabash Avenue. In 1870 they moved to 62 Michigan Avenue. They were burned out in the great fire of 1871 and .took temporary quarters at 20 Canal Street. In 1873 they located at 53-55 Michigan Avenue, and in 1875 they went to the corner of Randolph Street and Michigan Avenue, where they remained for thirty-four years, although many additions to the original quarters were made. In April, 1909, they moved to their present home in the new building at Erie and Roberts Streets.

Sprague, Warner & Co. have just moved their offices into their new building at Erie and Roberts streets and the north branch, thus making the completion of what is said to be the largest and most modern building for grocery business in the world.

It will be eight stories high, of mill construction and reinforced concrete, will contain about 800,000 square feet of floor space and will cost upwards of $1,000,000. C. A. Eckstorm is the architect. It will have 500 feet of dockage for lighterage purposes, about 400 feet of platform for teaming purposes, 800 feet of railroad trackage in the building, and 400 feet outside, and 1,000 feet of trackage of the Illinois Tunnel company in the basement reached by two rails.

The structure will have eleven freight elevators, two passenger elevators, loriators for carrying freight from one floor to another in an endless chain.

One section will be devoted to cold storage with three different temperatures to suit the requirement of the various goods placed there. Another feature will be the carrying of raw materials for preserving, canning, etc., to the top floor and then through different processes it will reach the ground floor a finished product and packed and ready for shipment.

Visitors are always welcome to the home of the Richelieu, Ferndell, and Batavia brands.This modern manufacturing, warehousing and merchandising plant occupies the largest building in the world devoted exclusively to the production and sale of food supplies. It is located on the north branch of the Chicago River, with a water frontage of 390 feet. It varies in width from 100 to 300 feet. The building is seven stories high, with a basement under all, and has a floor area of more than 500,000 square feet, or nearly ten acres. Visitors enter the building at the Erie Street entrance and are conveyed by elevators to the seventh floor, where are located all of the executive and departmental offices, except the Cigar and Tobacco Departments, which are on the fifth floor. 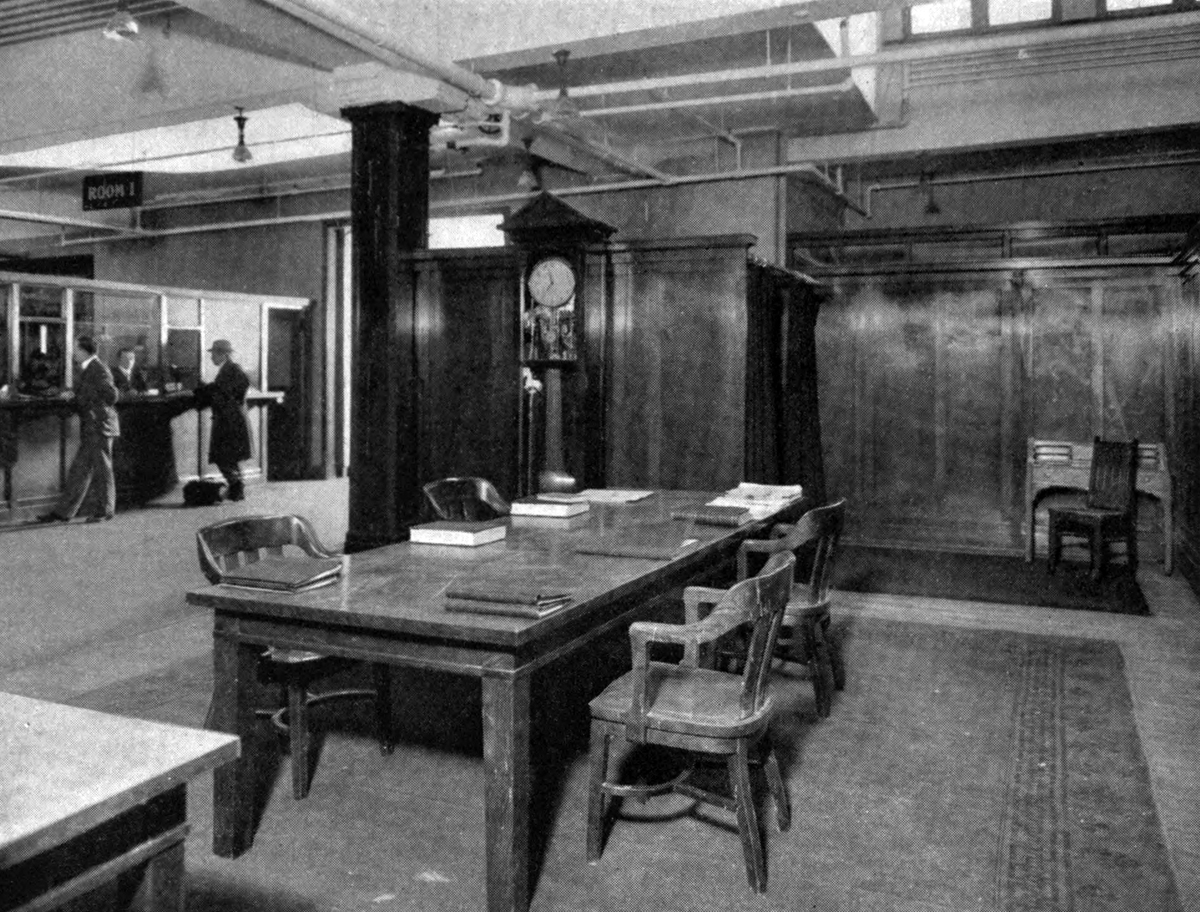 No building is better protected against fire. An automatic sprinkling system sends its protecting pipes throughout every room from basement to roof. ‘The system has a reserve of 80,000 gallons of water in four tanks on the roof. These tanks are fed by an 85-horse-power electric pump in an isolated fire-proof room in the basement, having direct connections with the river and supplied with a separate power service. The building is divided into four sections by masonry fire walls. All stairways and elevator shafts are enclosed in fire-proof wells that can be shut off at every floor, thus preventing the spread of fire from one floor to another. There are nine high-speed two-ton freight elevators, opening directly upon the shipping platforms on the first floor. 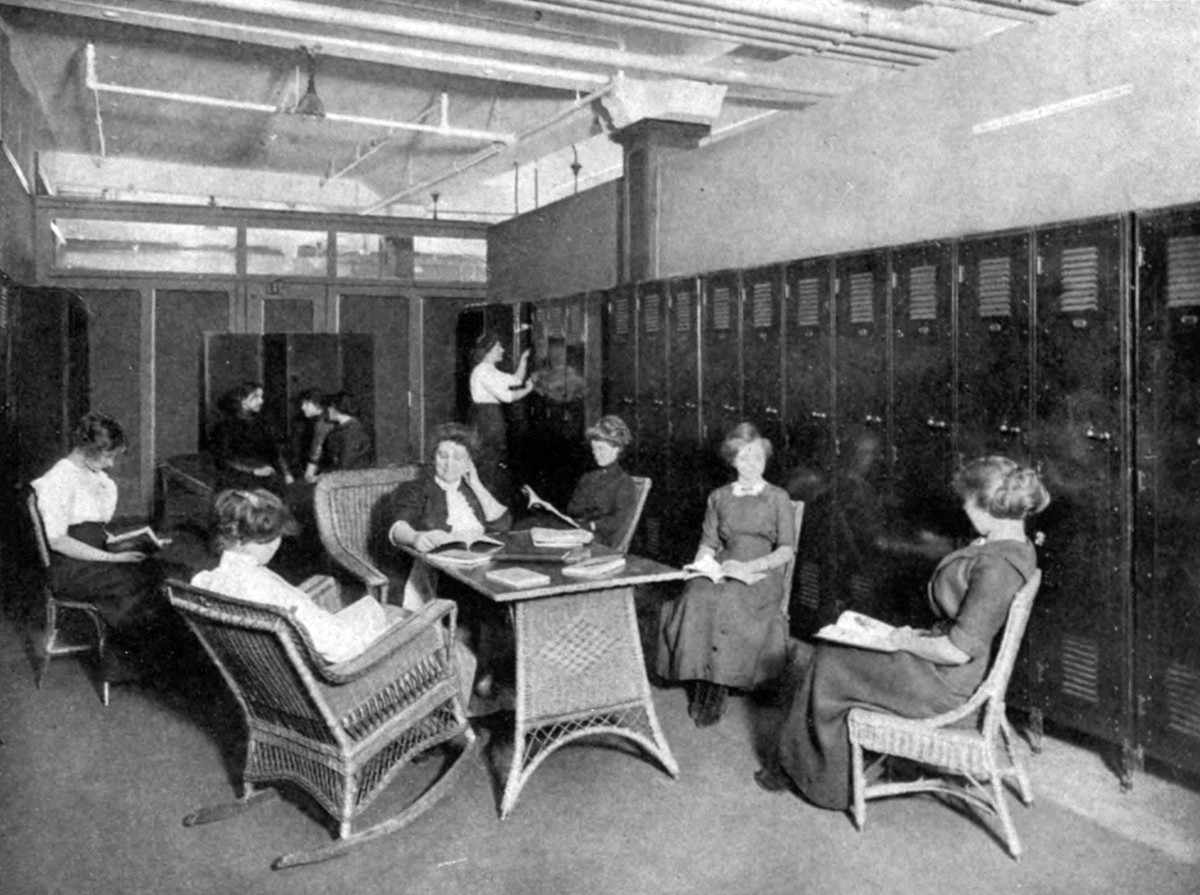 An interesting feature of the building is the pneumatic tube system for messenger service. There are thirty-seven stations, located in as many different parts of the building, from the basement to the top floor. A carrier placed in a tube in the basement can reach the central station on the top floor and be sent back again within twelve seconds. One operator controls the central station. As the carriers emerge from the tubes they drop on a traveling belt and the operator transfers them to the tube which will carry them to their proper destination. Two hundred and fifty separate carriers are in active service and in reality represent two hundred and fifty special messenger boys, one of whom would require twenty minutes for the trip made by carrier in twelve seconds. 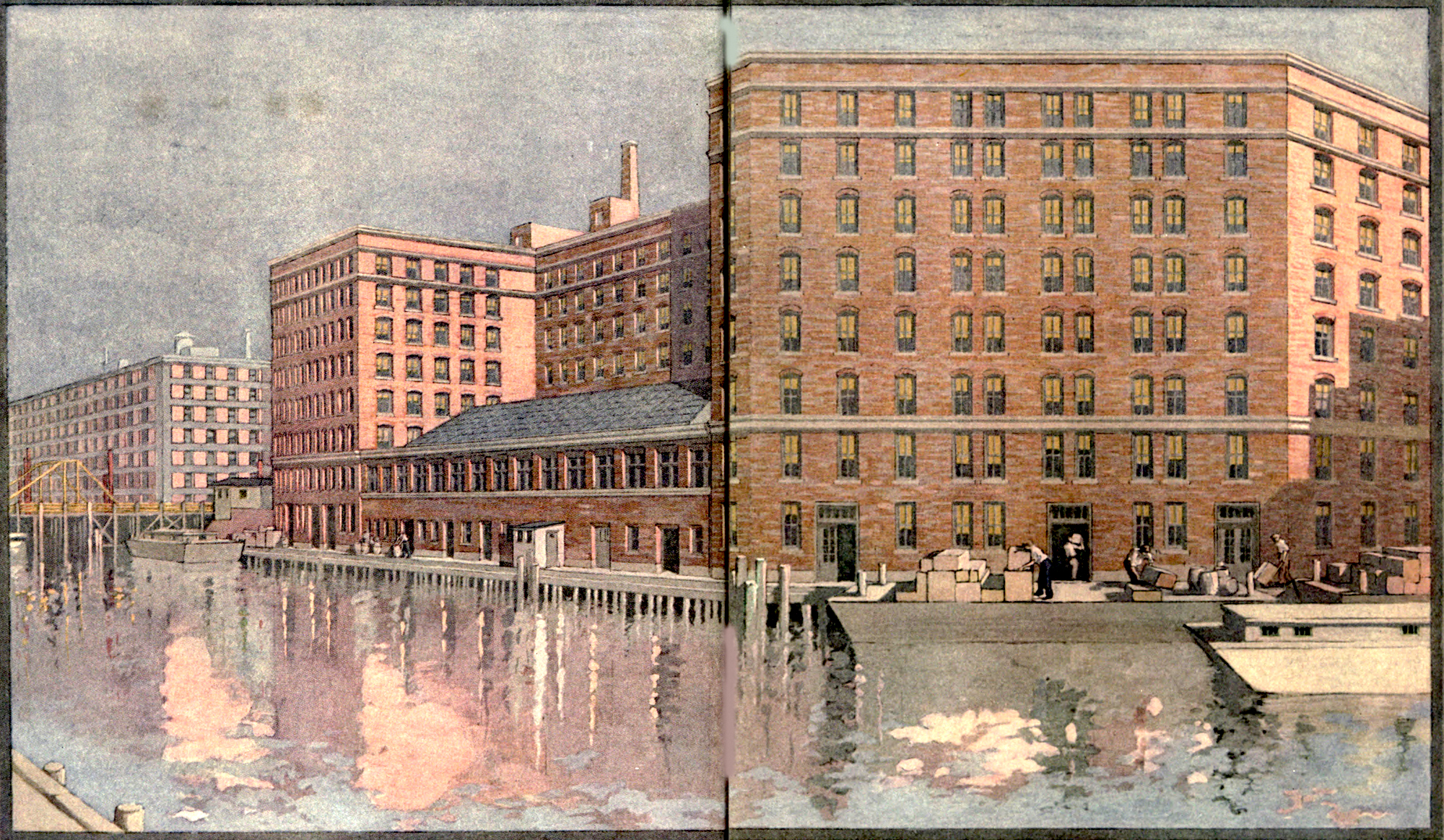 The finest vault in the world for the keeping of cigars is to be found in Sprague, Warner & Company’s building. It is 55 feet long and 15 feet wide, divided in two sections one for imported cigars, the other for high-grade domestic cigars. (See page 54 for illustration.) The insulation and atmospheric conditions, which are under perfect control, produce most excellent results. The vault is kept at uniform temperature and humidity in winter and summer, and the cigars are certain to stay sweet and clean, while scientific ventilation keeps them free from tobacco beetles or worms. Doing business in every state in the Union, it naturally follows that cigars, tobacco and pipes suitable to every section must be carried in stock and they are here. 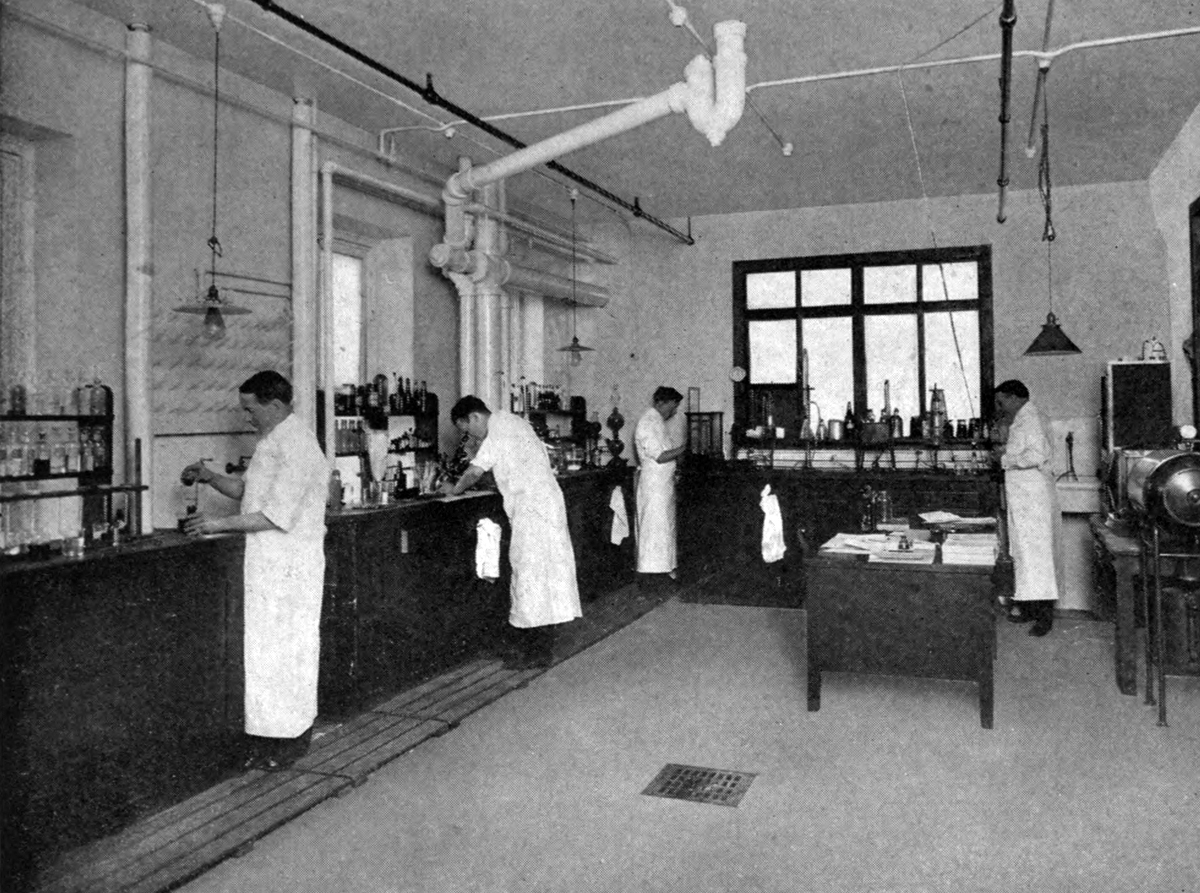 Fifty years (1865) ago one teamster, with one horse, did all the hauling, both in and out, for what is now the house of Sprague, Warner & Company. He hauled incoming freight to the warehouse, made deliveries to city customers and hauled all shipments to the freight houses. To-day a hundred carloads of merchandise can be transported from Sprague, Warner & Company’s shipping room to the railroad freight houses by means of an underground tunnel. Eighty per cent of local shipments go through this tunnel. Each merchant’s order is assembled, placed on a tunnel car in the shipping room, lowered to the tunnel 60 feet below the basement, and goes direct to the freight house. This tunnel is an innovation that makes for speed, promptness, accuracy and economy. 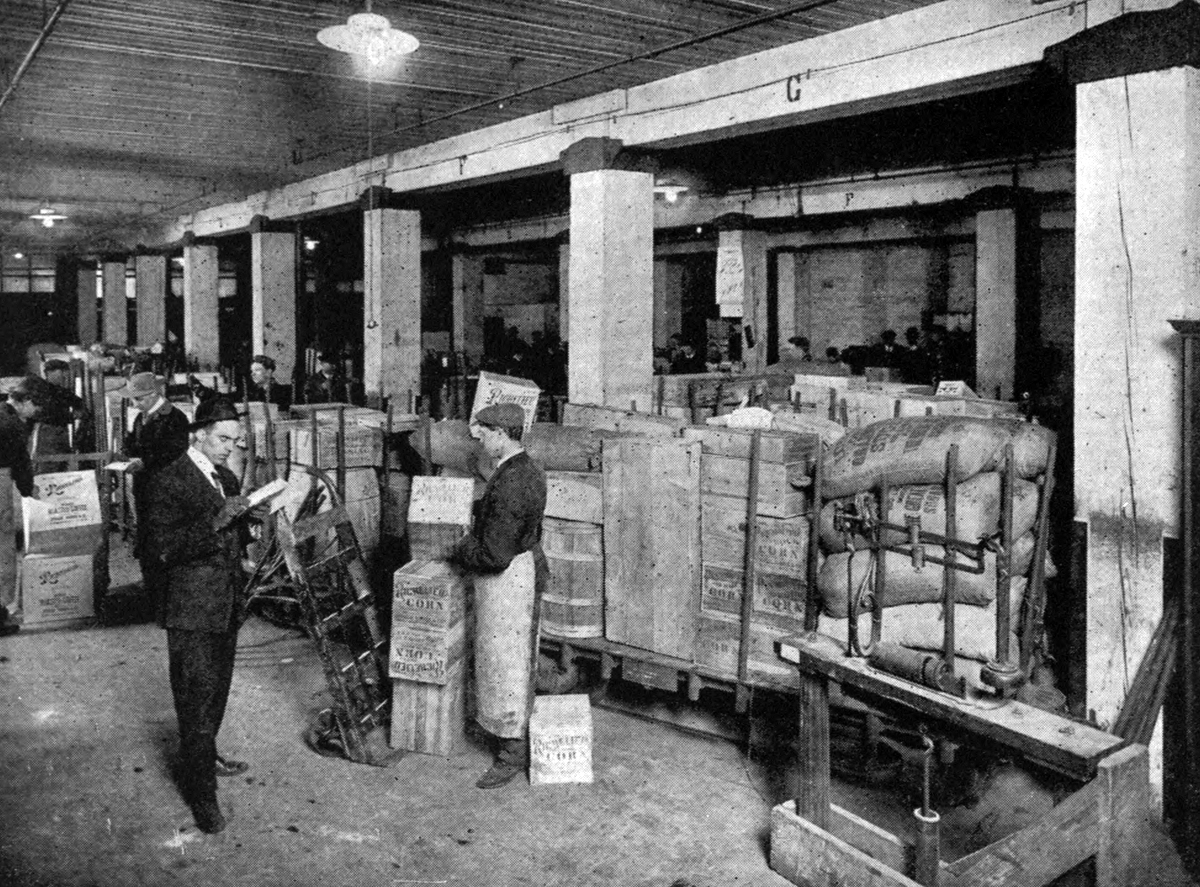 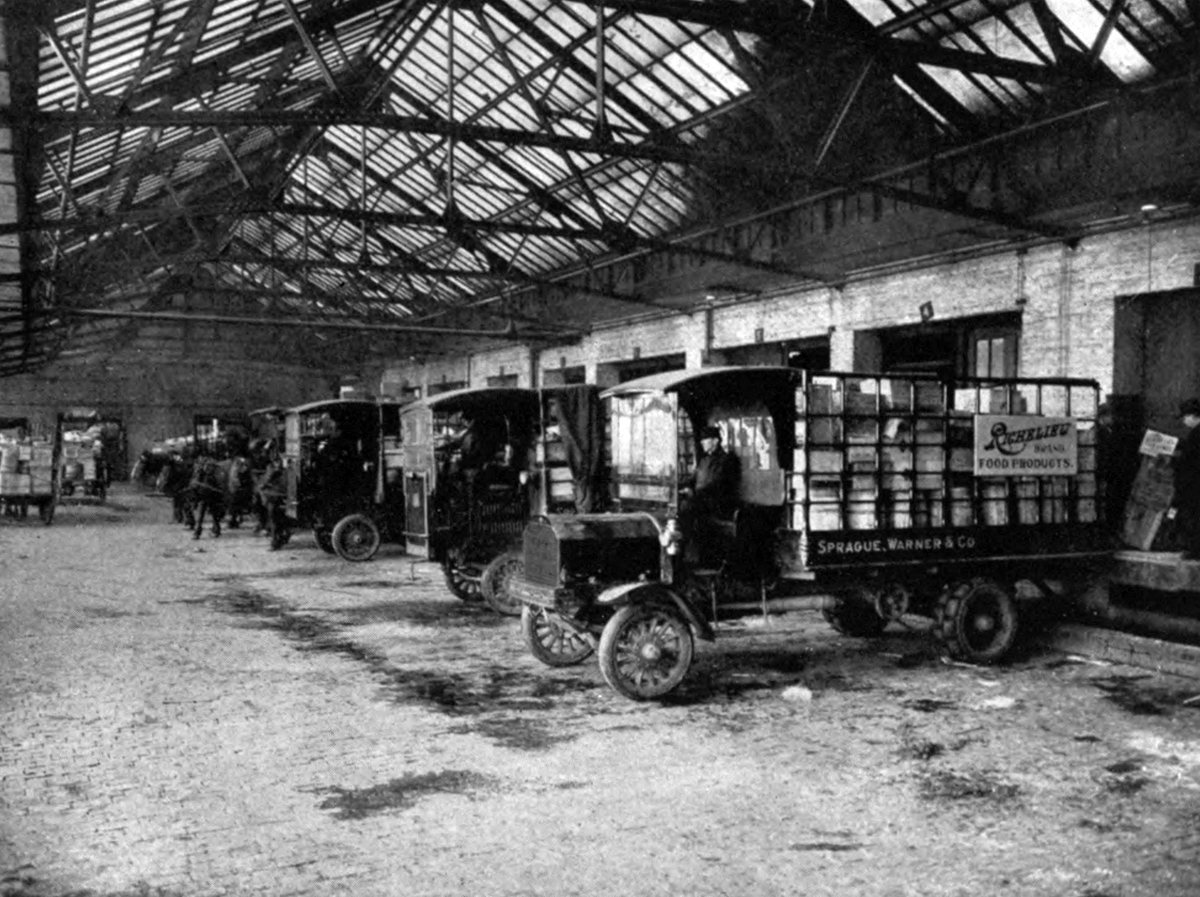 A cordial invitation is extended to every reader of this book to make a tour of inspection of the largest pure-food establishment in the world. Guides are always ready to show visitors about, and you can be sure of a hearty welcome.

Come and chat with these men many grown grey in the service of the house; grown grey yes, there are scores of men at the heads of departments to-day who started twenty, thirty or forty years ago in lowly positions at modest salaries and who have grown and prospered with Sprague, Warner & Company. These old-timers and the many hundreds of a younger generation form an army of faithful employes of whom any institution can well be proud. They love the house of Sprague, Warner & Company and “the house” loves them. 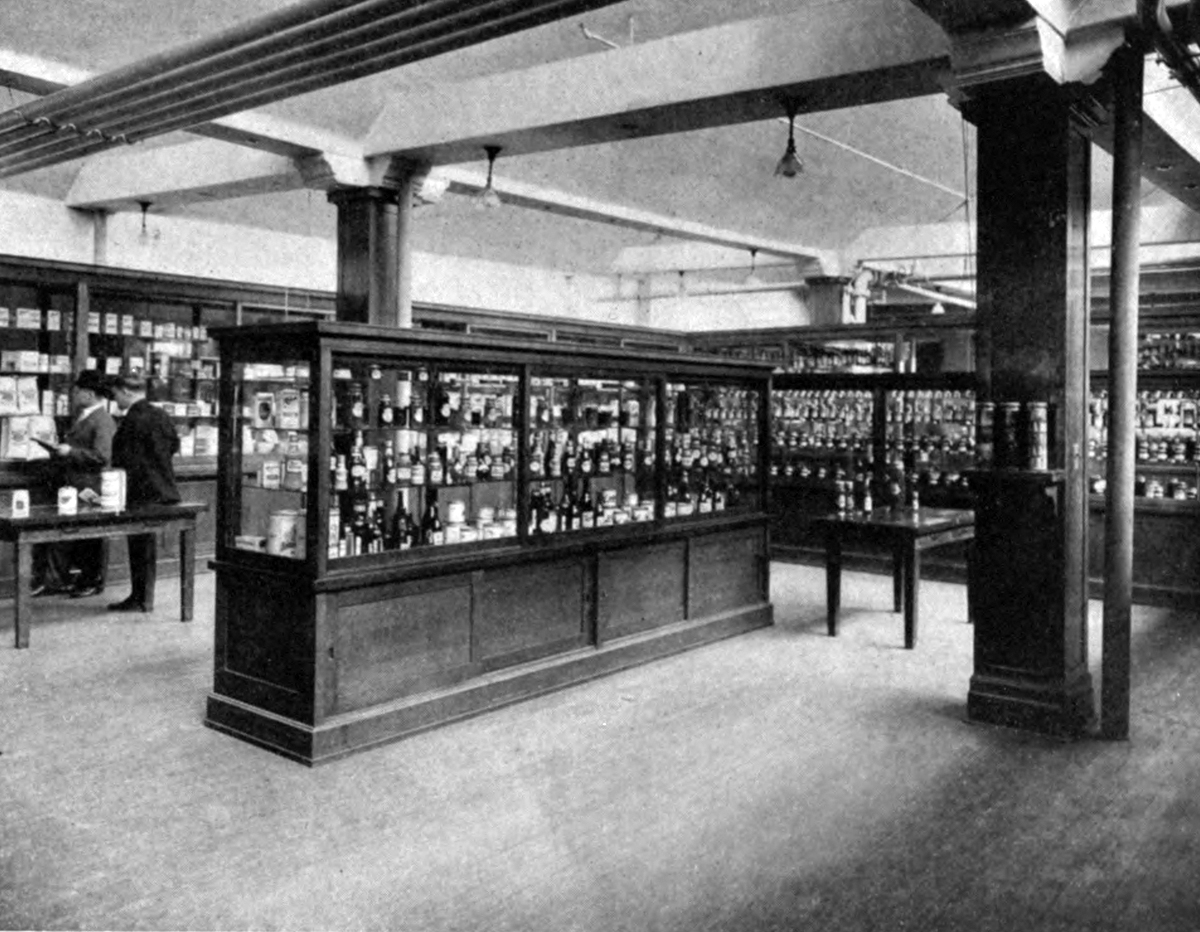 WARD WILL USE SPRAGUE PLANT FOR WAREHOUSE
Montgomery Ward & Co. will use the seven story warehouse at the northwest corner of Larrabee and Erie streets, bought from Sprague, Warner & Co. in April for $500,000, for warehouse purposes and for some general administrative departments now in the Ward administration building at 619 West Chicago avenue. it was learned yesterday. The company probably will take possession next May 1 when Sprague, Warner & Co. expects to move into its $2,000,000 plant now being built at the northeast corner of Sacramento square.

The present Sprague, Warner & Co. building fronts 126 feet on Erie street and approximately 420 feet along Lar- street and also along the river. It has been used by the wholesale grocery firm for many years. 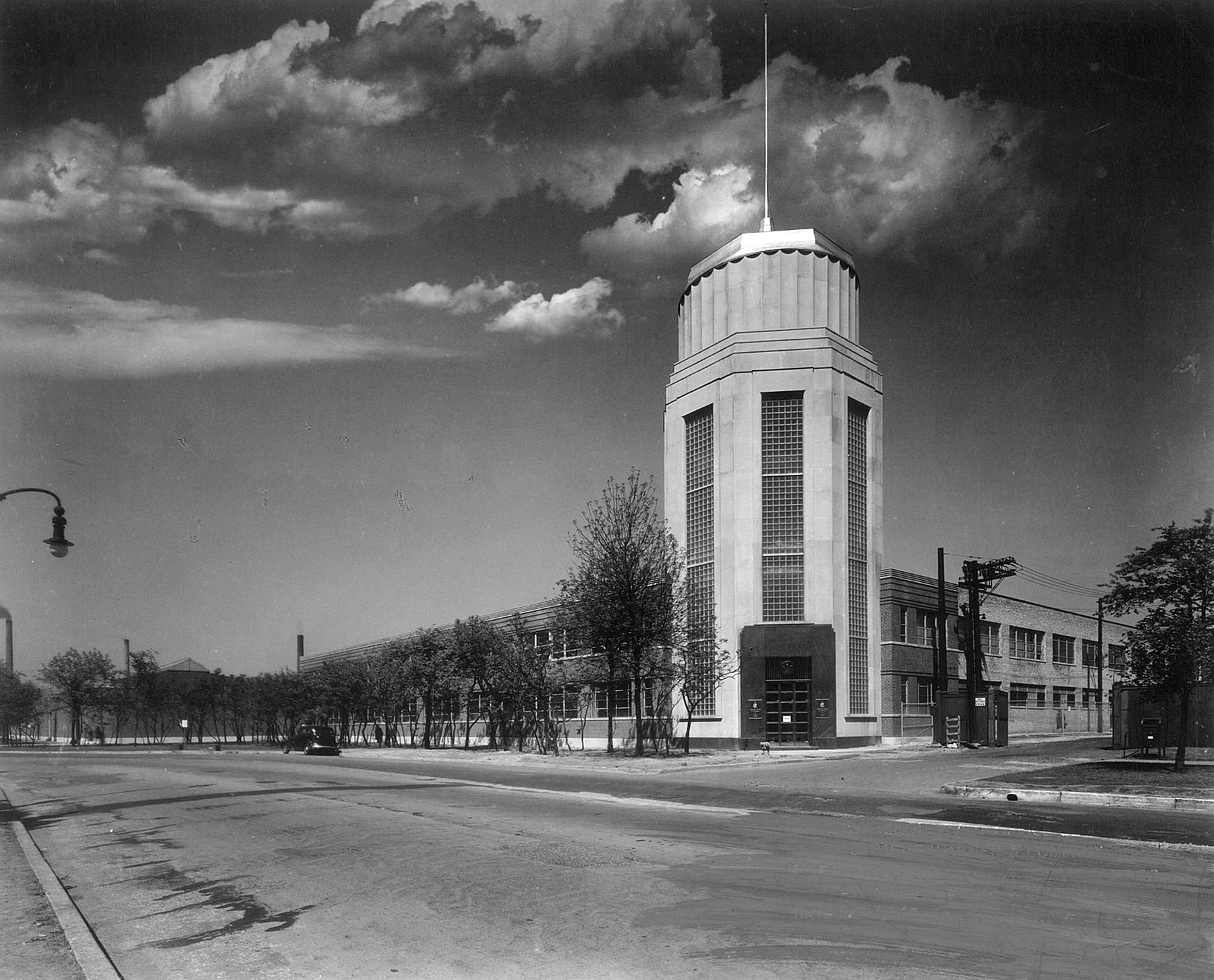 SPRAGUE, WARNER & CO.’S TEAMS AND TRUCKS BLOCKADE MICHIGAN-AV.
Michigan avenue for about 150 feet north of Randolph street practically is monopolized by Sprague, Warner & Co., who occupy the building on the north-west corner of the two thoroughfares. From fifteen to twenty-five drays will be found backed up against the sidewalk on the west side of Michigan avenue nearly all day, blocking more than one-half of the street. Only a narrow space between the heads of the horses and the sidewalk on the other side, and blockades arc of occurrence. The sidewalk in front of Sprague, Warner & Co. is absolutely impassable for ordinary pedestrians. Only acrobats find it possible to clear the numerous skids extending across the walk from the back entrances of the drays to the different entrances. What little room there is left between the skids is occupied by boxes, barrels, bags, and piles of smaller goods ready to be loaded or just unloaded. 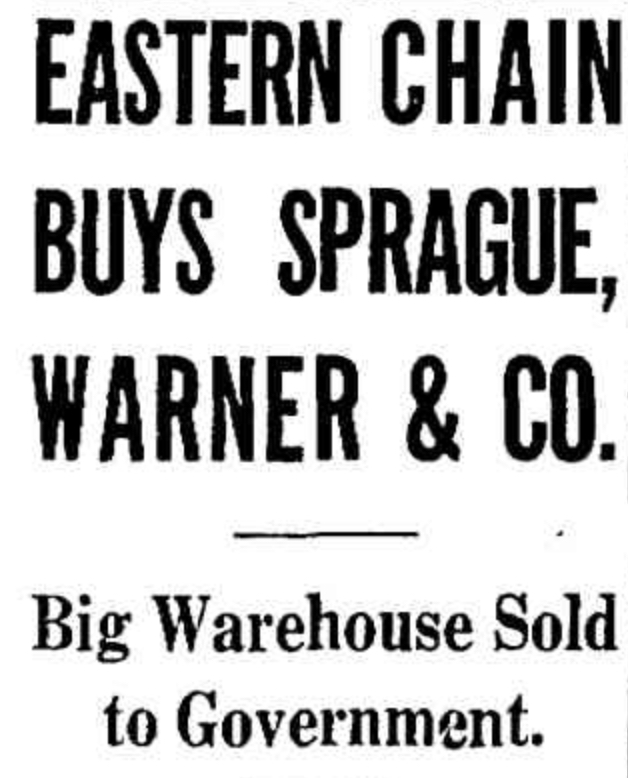 Purchase of Sprague, Warner & Co., old Chicago wholesale grocery house, by the C. D. Kenny company (Consolidated Foods, in 1945), manufacturing wholesale grocery chain, Baltimore, was announced yesterday by Nathan Cummings, president of the eastern company. Both units will be operated as separate companies and Sprague, Warner will continue to have its headquarters in Chicago. Their combined annual sales exceed 30 million dollars.

At the same time Cummings disclosed the the United States government is buying outright Sprague Warner’s mammoth warehouse (equivalent to four city blocks in area) which it built last year at 505 North Sacramento boulevard. The grocery company is negotiating for new headquarters and probably will not leave its present home until fall. 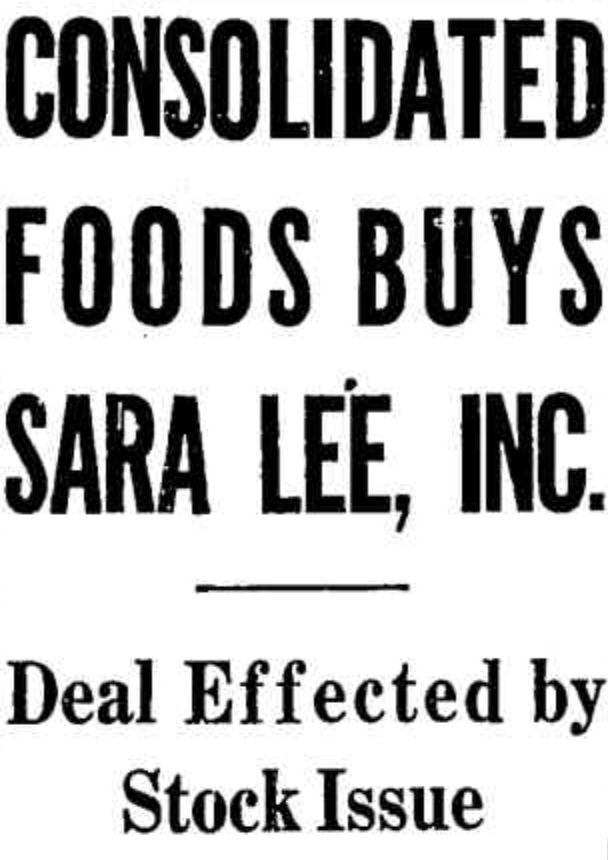 The acquisition was effected thru the issuance of approxi- mately 160,000 shares of Con- stock which closed Wednesday on the New York Stock exchange at $17.25. Kitchens of Sara Lee will be operated as a subsidiary with no change in policy or man- agement.

A major factor in the agree- ment was the opportunity to expand Sara Lee’s operations in the premium quality food field, Lubin said.

Sara Lee has acquired a plant on Consolidated Foods property in River Grove and expects to be in production in November, he said. This will enable Sara Lee to increase its sales 5 million dollars in a year, Lubin asserted.

Consolidated Foods started as a wholesale food firm in 1939 and now has an annual sales volume of 300 million dollars. It is one of the most diversified companies in the food field.

In 1985, the company changed its name from Consolidated Foods to the Sara Lee Corp., with headquarters in Deerfield.