Competition for a Stadium on the Lake Front 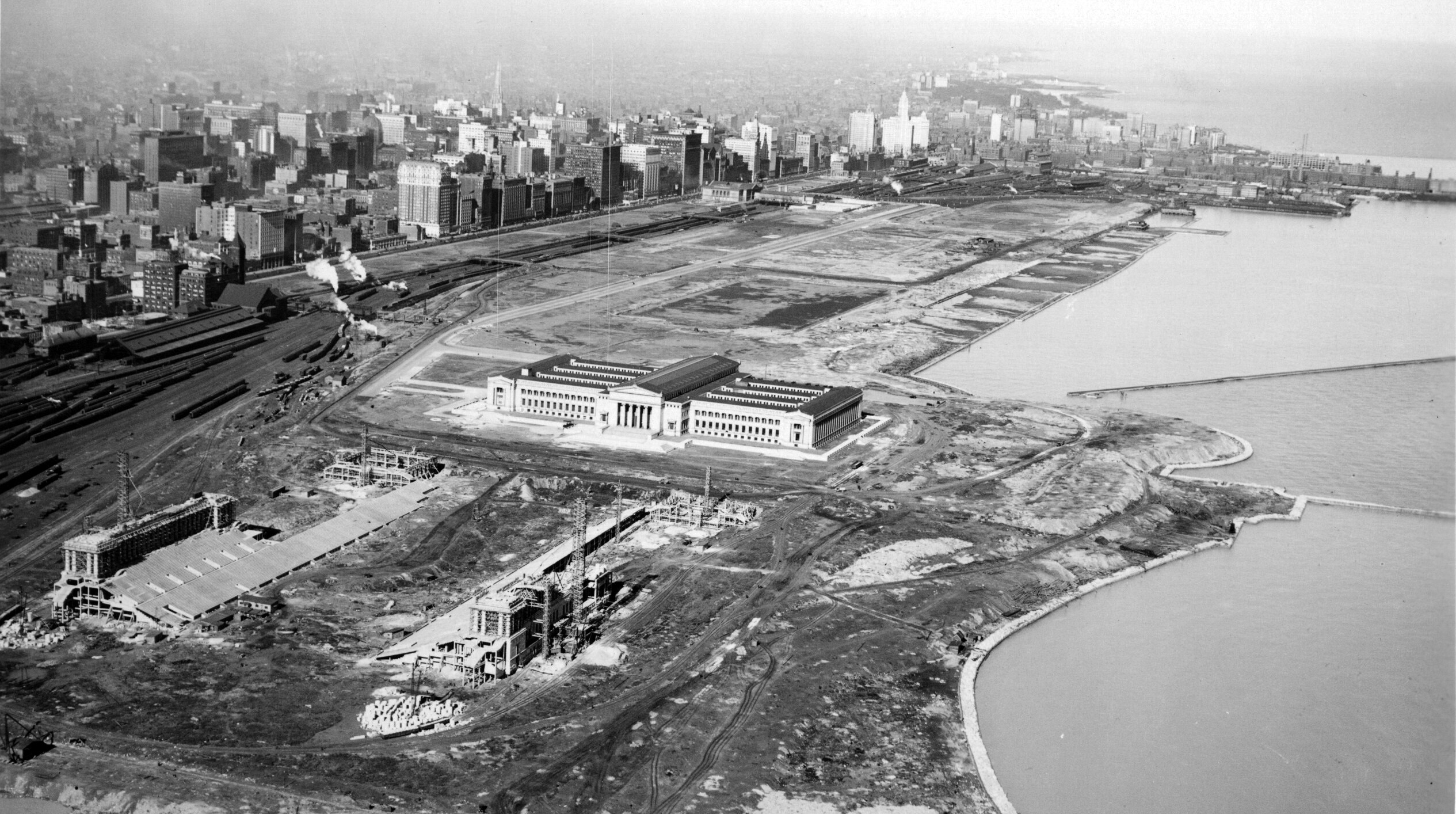 The time might have been some ancient day when gladiators met under Roman skies—the scene the old Coliseum. For that is what the official opening of the Grant Park stadium resembled yesterday, the anniversary of the great fire that laid Chicago in ruins half a century ago.

And the spirit of that city which is Chicago today, the city that rose out of the ashes, was there. It was there in the 60,000 citizens—men, women, and children—who yelled themselves hoarse; there in the voice of Edward J. Kelly, president of the South Park board, who helped to make the great $5,000,000 stadium a possibility; there in the very atmosphere surcharged with a great civic pride and zest.

Kelly the Engineer.
It was Kelly, the engineer and head of the park board, following Mayor Dever to the platform, who got into his speech something magic about what the occasion really really meant to Chicago, other than the holding of a holiday in a great new amphitheater of the ancient architecture that made it like a festival scene of old.

Somehow Mr. Kelly expressed in brief sentences all the vast filling out Chicago has done in that half century since, as a city of 300,000, it was laid to waste by the flames only to rise up again to become a city of 3,000,000, ten times as big—and with a “future that only a dreamer can see.”

“There is no doubt,” the president of the park board said, “there is no doubt in the world that Chicago will some day not so long hence be the largest and leading city of the world. We have the geographical position and all the natural advantages that must make it so.”

Amplifiers Find Lost Pair.
And the amplifiers made his voice, as that of all the other speakers, heard plainly all over the grounds and by every one in the vast throng. Those amplifiers did more than that; they demonstrated the efficiency of modern electrical development, via:

A child of 4 and her brother, 6, got lost in the crowd. William J. Sinek, builder of the stadium, better known as an Elk of prominence, was at the microphones. He announced that the mother was worried over the two youngsters and asked that they be returned to the reviewing stand. He had not spoken the last word when a policeman was seen coming from away off in another section on the east side of the stadium starting across with them to their mother.

Military and naval bands from Fort Sheridan and Great Lakes vied with the Chicago police band in making martial music, and the police force octet, a double quartet of men in uniform, sang “Charley, My Boy” and “Wrap Me Up in the Sunshine of Virginia.” and other tunes with a lift that brought them a 60,000 strong “hand.”

Perhaps the most exciting events of the day were the polo game in which Col. R. R. McCormicj and Frank Bering, manager of the Hotel Sherman, led teams; the burning of the replica of the famous O’Leary barn; the drills of the mounted police and the cavalry.

The polo team headed by Col. McCormick defeated Mr. Bering’s quartet after a hit contest by a score of 5 to 4—a polo contest witnessed by an audience the like of which never before watched a game of it, for it is usually played, in this country at least, before small audiences of society folk.

A display of former and modern fire apparatus and demonstrations of the present day efficient fire fighting methods followed the burning of the O’Leary barn, in which fire Miss O’Leary Cannon, great-great-granddaughter of the original Mrs. O’Leary, took a leading part.

This exterior shot of the Soldier Field west colonnade at night appears to have been taken just after its completion in 1924.

Excerpted from the article published in Chicago’s Accomplishments and Leaders , Glenn A. Bishop, 1932:

The South Parks and Their Contributions to
Chicago’s Health, Education and Entertainment

The great $6,000,000 Stadium—Soldier Field—its classic columns built of reenforced concrete, much of it pre-cast in the form of cut stone, has been built, as was the Parthenon, or the Coliseum of Rome, to endure through the ages. Perpetuating the memory of Chicago’s sons who made the supreme sacrifice in the World War, it symbolizes in its classic architecture, in its beauty and its strength, the youth and courage and the will to win—the spirit of the city’s young manhood of 1917. 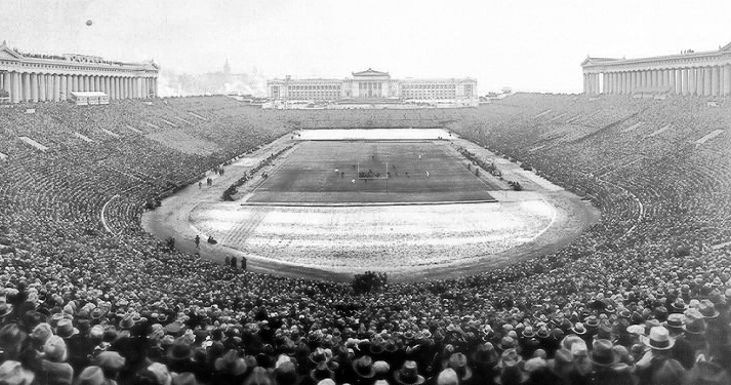 On November 27th, Navy was slated to face Army in Chicago for the dedication game of Soldier Field. It was the most highly anticipated game of the year, and of any year, attracting 600,000 ticket requests and an unprecedented 110,000 attendees.

The signing of the Armistice, followed by the war exhibits, the homecomings, the parades and military reviews of the first post’war months brought home to Chicagoans the need not only of erecting a suitable memorial to the hero dead, but of providing a place for the presentation of great spectacles, pageants, and festivals; for athletic events and for the national gatherings which the city attracted annually. This memorial is a U-shaped structure 300 feet wide and 1,000 feet in length, and the site covers approximately 38 acres. The colonnade, which is the distinctive feature of the edifice, rises 110 feet above the field. At either side of the open north end it terminates in monumental plazas on which are provided pedestals for heroic sculptured figures. The south end is crowned with a Greek temple. Permanent seats in the east and west stands accommodate 75,000 people, while temporary seats increase the capacity to 150,000. Soldier Field has been the scene of such spectacular events as the Eucharistic Congress, the Dempsey-Tunney fight, football games, the United States Army tournaments, the post-Olympic athletic carnival, and the Chicagoland music festivals.

On November 11, 1925 Grant Park Municipal Stadium was renamed as Soldier Field. The Chicago Tribune, however, strenuously objected to the illogical grammatical choice of renaming the great field after a single soldier and refused to use the correct name of the stadium till they finally succumbed around 1970.

The Tribune yesterday in this department tried to catch up with The Tribune of the day before in another department, the local room and local copy desk, for permitting Soldiers’ Field (a moment, please. It is, whatever the south park commissioners may have put on the record, Soldiers’ Field, and not Soldier Field) to be called, for the American Legion celebration of Armistice day, Grant Park stadium. We have a good deal of confidence that this is all right all right with Gen. Grant.

The old man got by with his objectionto that, but as usual they did him dirt. They changed Soldiers’ Field to Soldier Field. Try to say Soldier Field. Then ask what soldier. Maybe Mike, or it might have been Jan or possibly Sven. Maybe because Harvard has the older Soldiers’ Field the south park commissioners thought they ought not to be copy cats in entirety. Harvard will not object. We deliver Harvard right now.