JEWELERS BUILDING (1926-1928), at 35 E. Wacker drive, on the southwest corner of N. Wabash avenue, later the Pure Oil building (1928-1962), was built 1925-1927. Giaver & Dinkelberg were the engineers and architects, and Thielbar & Fugard the supervising architects. The building is 24 stories high, with a 17-story tower and three basements, supported on rock caissons, This building was one of the last of the large-scale commercial structures in Chicago to be designed in the classical revival style that became popular in the wake of the World’s Columbian Exposition of 1893.

This was also the first building designed to take advantage of the Wacker Drive Esplanade, on which construction was proceeding concurrently. The lower floors of were opened to their first tenants in May, 1927, the upper stories opened in the summer and the tower in October. 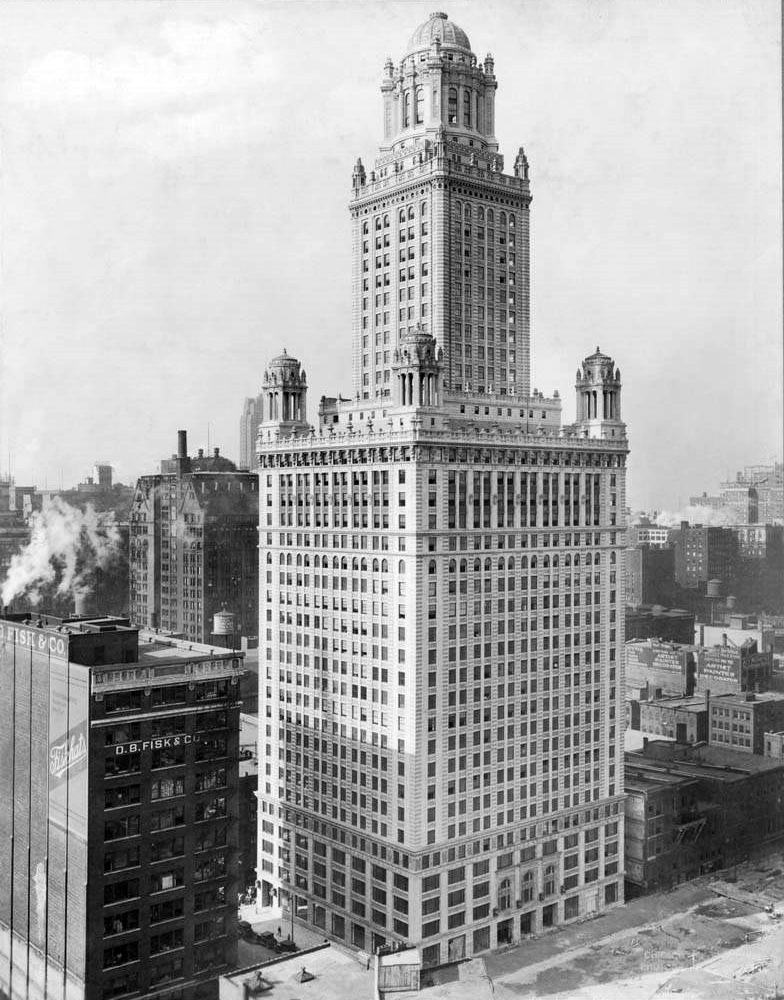 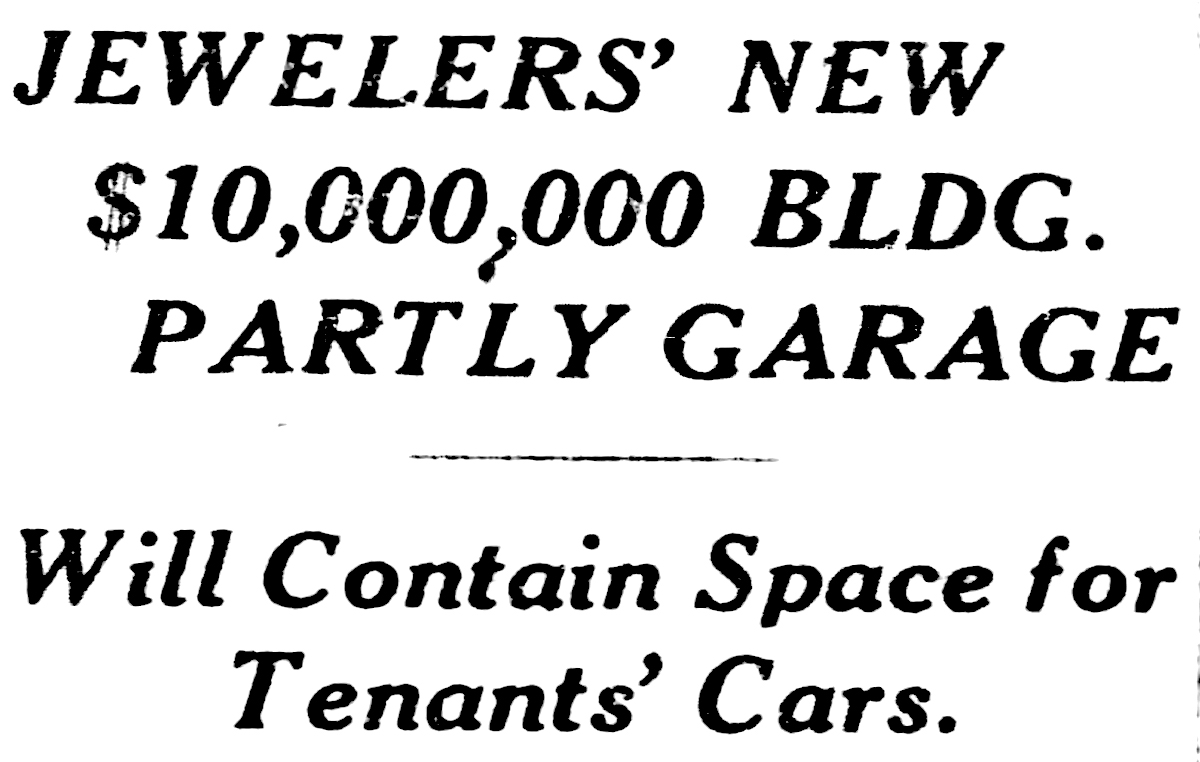 Chicago is to have the world’s tallest garage and the city’s second highest office building, combined in one structure, 502 feet high at the southwest corner of Wabash avenue and South Water street. This will be the forty story Jewelers’ building, to represent an investment of $10,000,000 and to house several hundred members of the Jewelers’ association of Chicago and allied industries.

Details of the Project.
The 162×140 site was bought in four parcels through Callistus & Ennis & Co., who will be the agents of the building, with Clark & Trainer associated in the purchase. Title was taken by Earl A. Clemons of the C. W. Ruth Engineering company, and will be at once transferred to the Riverside-Plaza corporation.

Glaver & Dinkelberg have drawn plans for a main section of twenty-three stories above the proposed South Water street boulevard level. Towering above this will be several setbacks, the tip of the main dome being 502 feet above the boulevard, 17 feet higher than present level.

Twenty-five percent of the entire structure, or 51,148 square feet on each of the first twenty-three floors, will be devoted to garage space, accommodating 625 cars.

Work Starts This Summer.
The balance of the entire building, 75 percent, will be used for offices, as well as clubrooms, grill, etc., for the Jewelers’ association. Work will start in about two months.

At present the Chicago Temple is Chicago’s highest building, being 556 feet, one foot taller than the Washington monument. The Jewelers’ will come next, then comes the Straus, with 475; the Tribune Tower will be 462½ feet. The Wrigley is 400 feet. 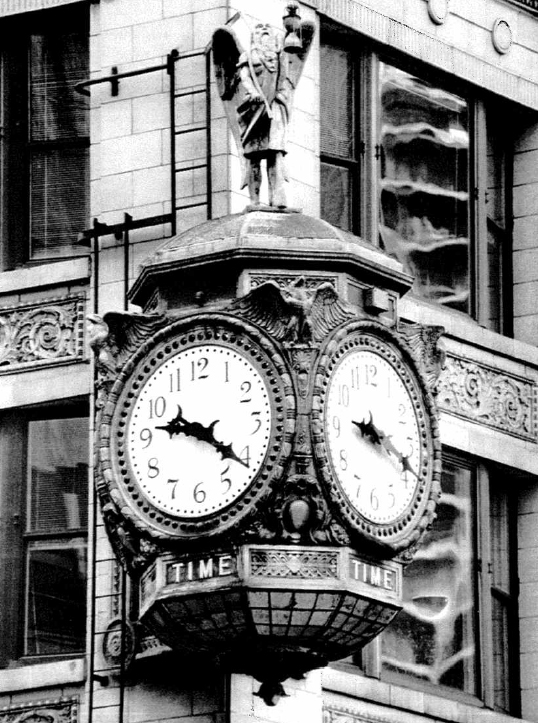 Mounted on the third floor at the Wabash Avenue and Wacker Drive corner, the 35 East Wacker Drive Building dock is one of the best-known time pieces in Chicago. Weighing an estimated six tons, the clock was donated to the building by one of its first major tenants, the Elgin National Watch Company. 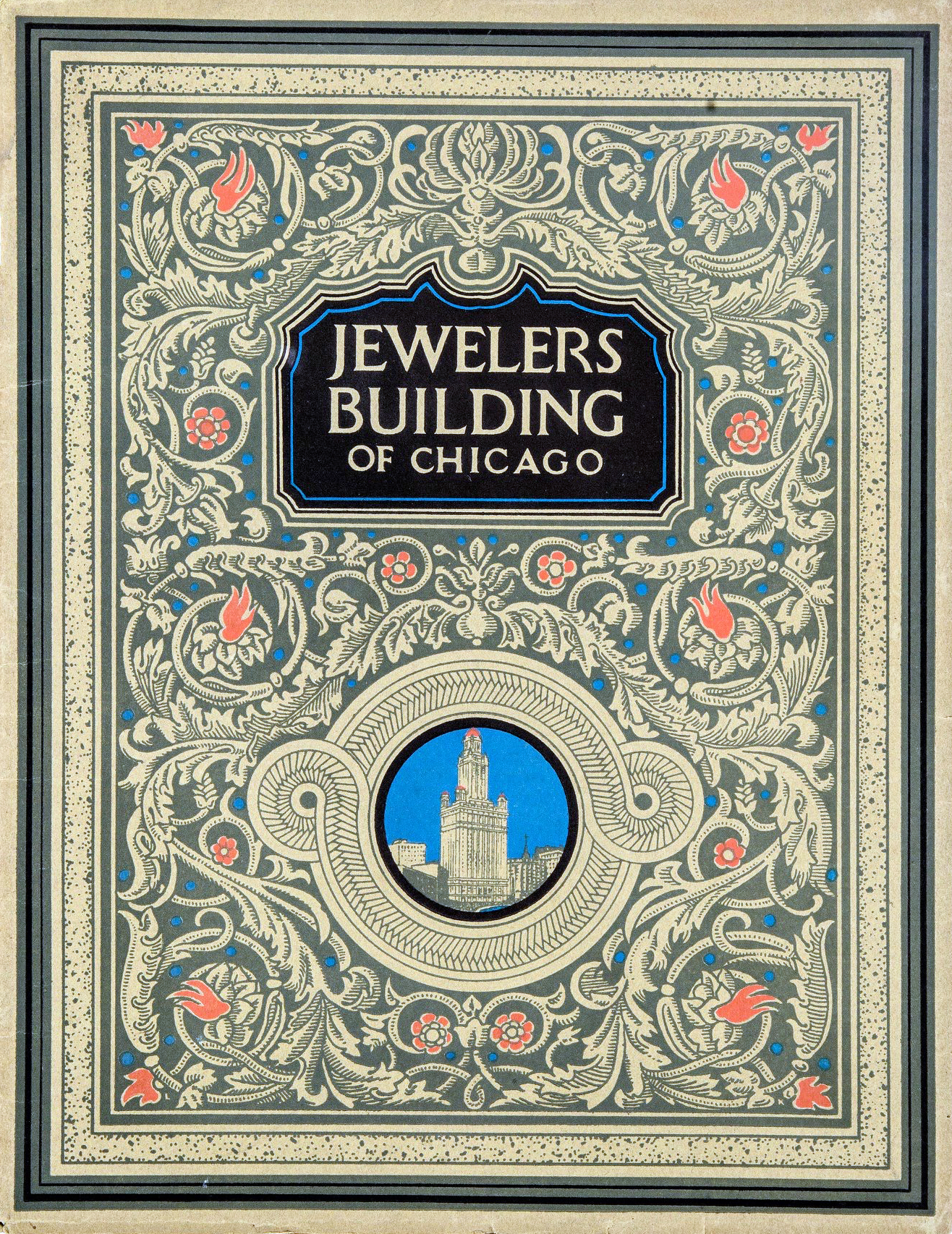 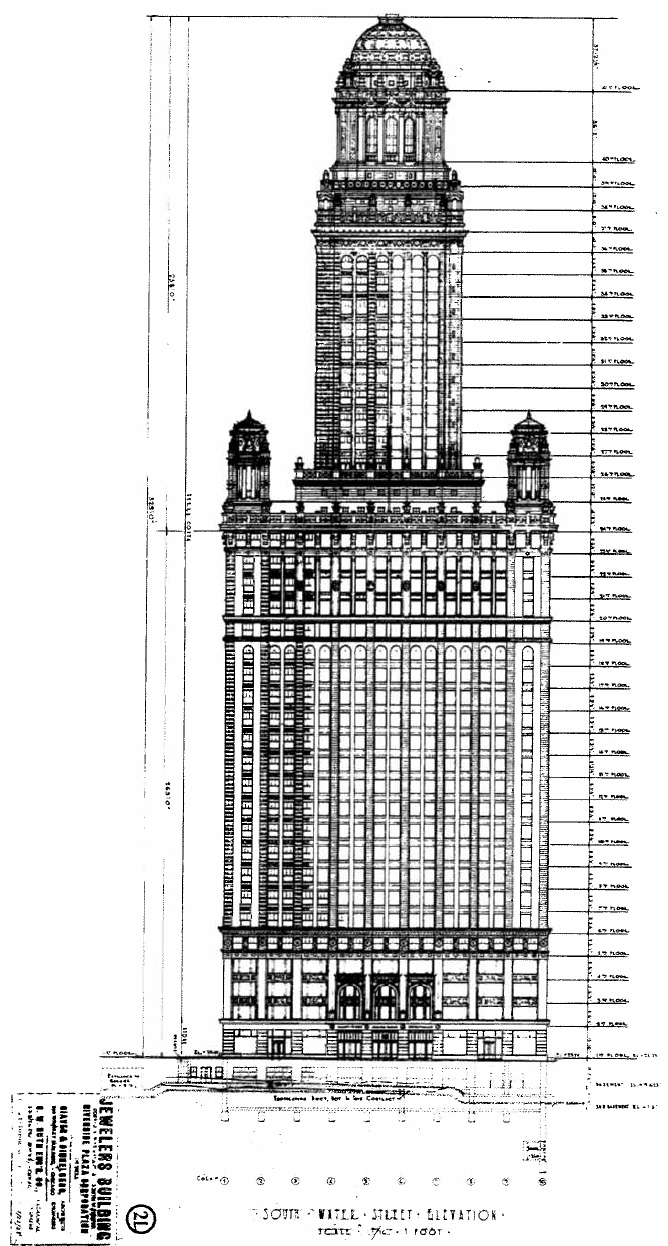 Elevation drawing of the proposed 35 East Wacker Drive building.
May 22, 1925

The automated parking system originally installed in the 35 East Wacker Drive Building was a constant maintenance headache. It often broke down and, as a unique system, over time was increasingly difficult to repair due to the lack of available replacement parts. Although they were for a time determined to retain the garage as a desirable marketing tool, Thielbar & Fugard apparently gave up the idea when automobile designs changed. The proportions of the new cars of the late Thirties were longer and wider in their wheelbase than those of the early Twenties, which were tall and narrow. This shift in automotive style rendered the garage elevators of 35 East Wacker Drive obsolete; they were too narrow to accommodate the wider bodies of the new vehicles, with the result that the majority of the tenants could no longer make use of the garage. Faced with the choice of widening elevator shafts that extended over 200 feet in height, or leaving tens of thousands of square feet of unusable space on every floor from the second through the twenty-fourth, it was decided in 1940 to remove the system entirely. One redesigned elevator was retained for added passenger access and all of the spaces formerly used for automotive storage was converted into usable office space. 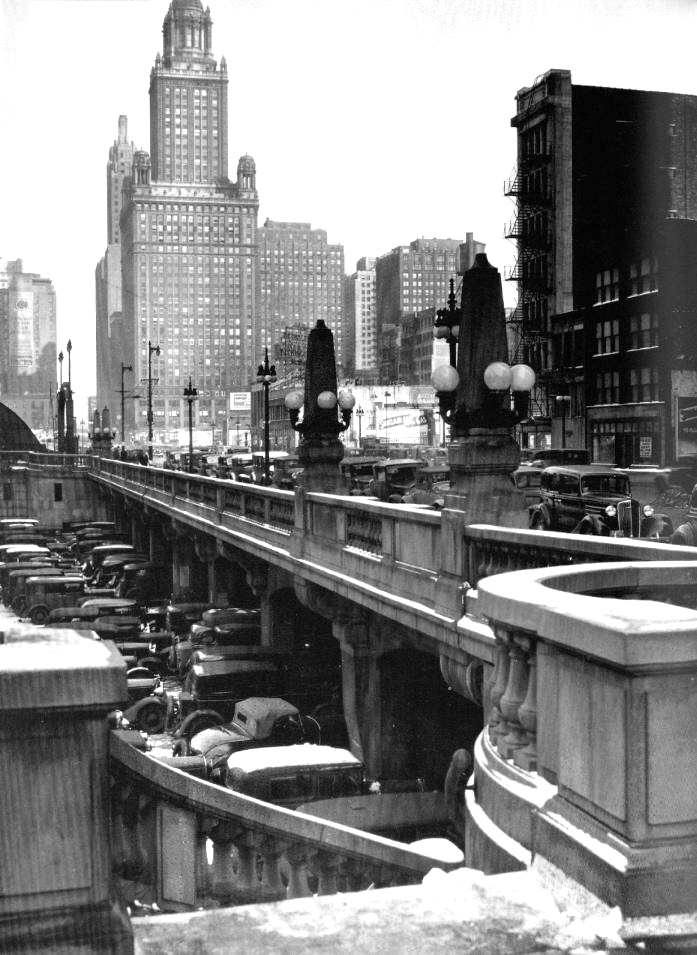 Before you read this, take a look at the nearby tank panorama and the read the under the cut. Now, assuming you’ve done this, we’ll explain that the above is on the new Jewelers’ Building, at Wacker and Wabash. Instead of sticking four ungainly tanks on steel legs (there are four of these towers on the building), Yiaver & Dinkleberg, architects and engineers of this huge structure, designed these attractive and ornamental tank screens, which beautify the building instead of disfigure it.

M. E. Smith of the Chicago Bridge and Iron works sent in the picture with the comment:

Last Sunday’s Tribune carried an illustration and article criticizing water tanks on roofs of buildings. Why don’t you make your criticizing constructive by showing what can be done to take the unsightliness from the roof tanks? 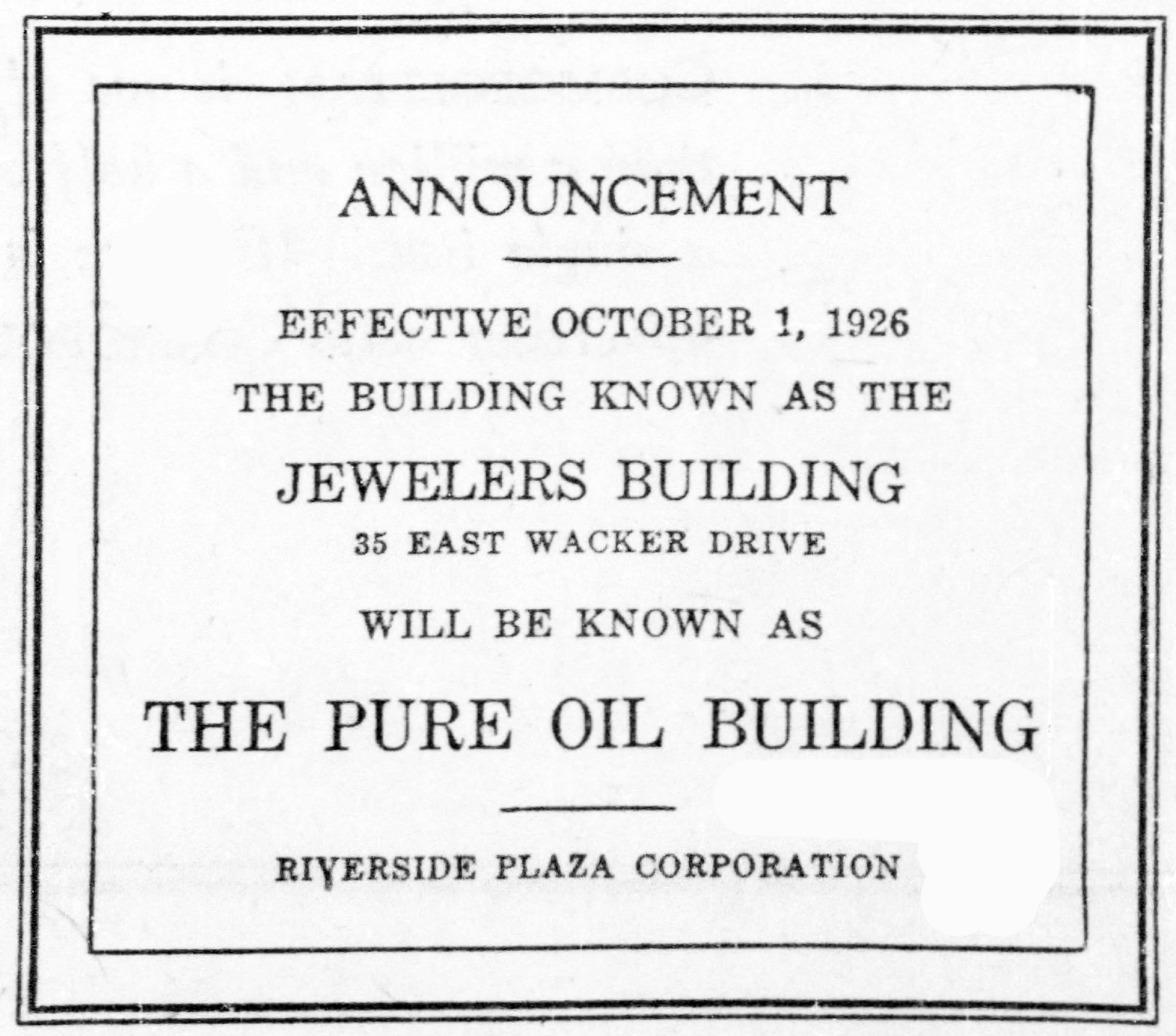 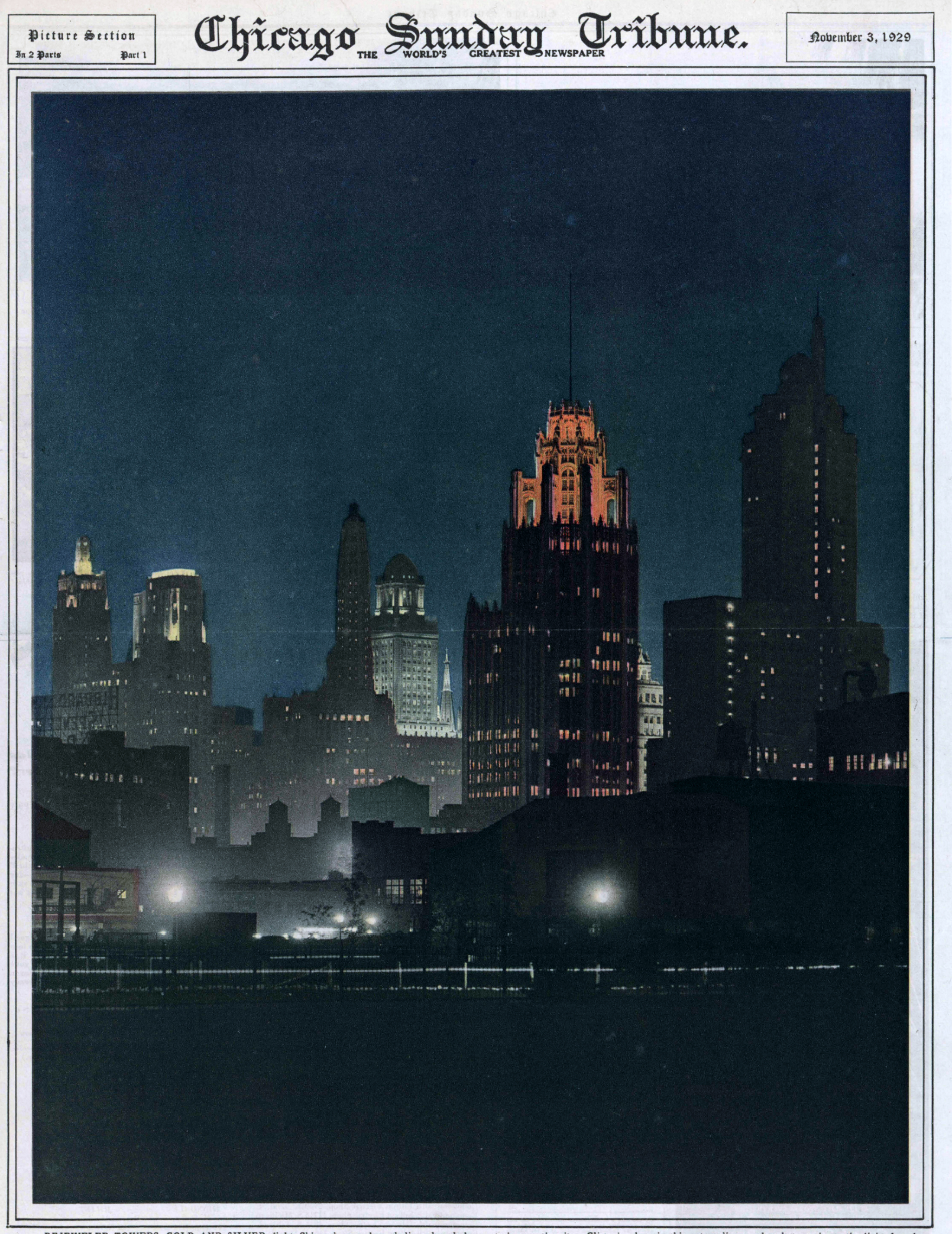 BEJEWELED TOWERS, GOLD AND SILVER, light Chicago’s marvelous skyline when darkness steals over the city. Glistening here in this extraordinary color-photograph are the lighted peaks of the Carbide and Carbon building; of 333 North Michigan Avenue; the Pure Oil building; the Chicago Temple; the amber crown of Tribune Tower dominating the picture; and back of Tribune Tower, the glistening
white Wrigley building.

Interstate Garage
The Interstate Garage corporation was incorporated under Illinois laws on Nov. 21, 1921. In a statement filed with the secretary of state of Illinois as of May 1, 1922, the company stated that it was selling preferred and common stock to finance the purchase of land on South Water street, Chicago, on which to erect a large garage building. When the land is obtained it proposes to float a bond issue to finance the constructyion of the building. These bonds will, of course, be ahead of the stocks, and it will likely be some time after the garage is completed and in operation before any dividends can be expected. The preferred stock is $100 par value and the common $10 par. As the company is new and the business cannot be started for months, the stock is a pure speculative at present. It represents participation in a new business venture, which may or may not be successful. 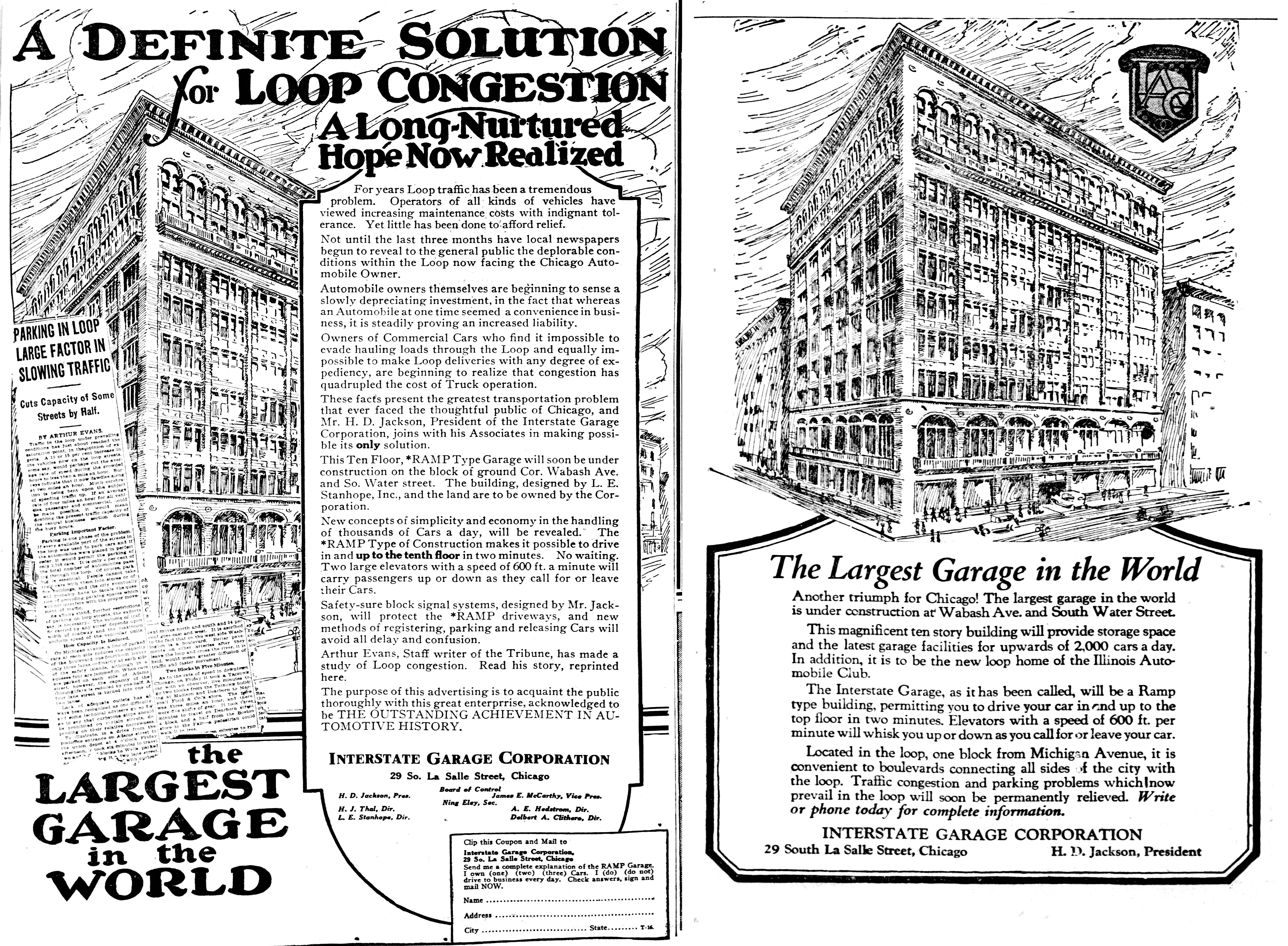 The Garage was never built, on the lot of the Pure Oil Building. Ironically, twenty-five percent of the entire Jewelers Building, or 51,148 square feet on each of the first twenty-three floors, will be devoted to garage space, accommodating 625 cars.