CARBIDE & CARBON building, at 230 N. Michigan avenue, on the southwest corner of E. South Water street, built in 1929, is 40 stories high, with two basements, on rock caissons. Burnham Brothers were the architects and Charles Harkins the engineer. 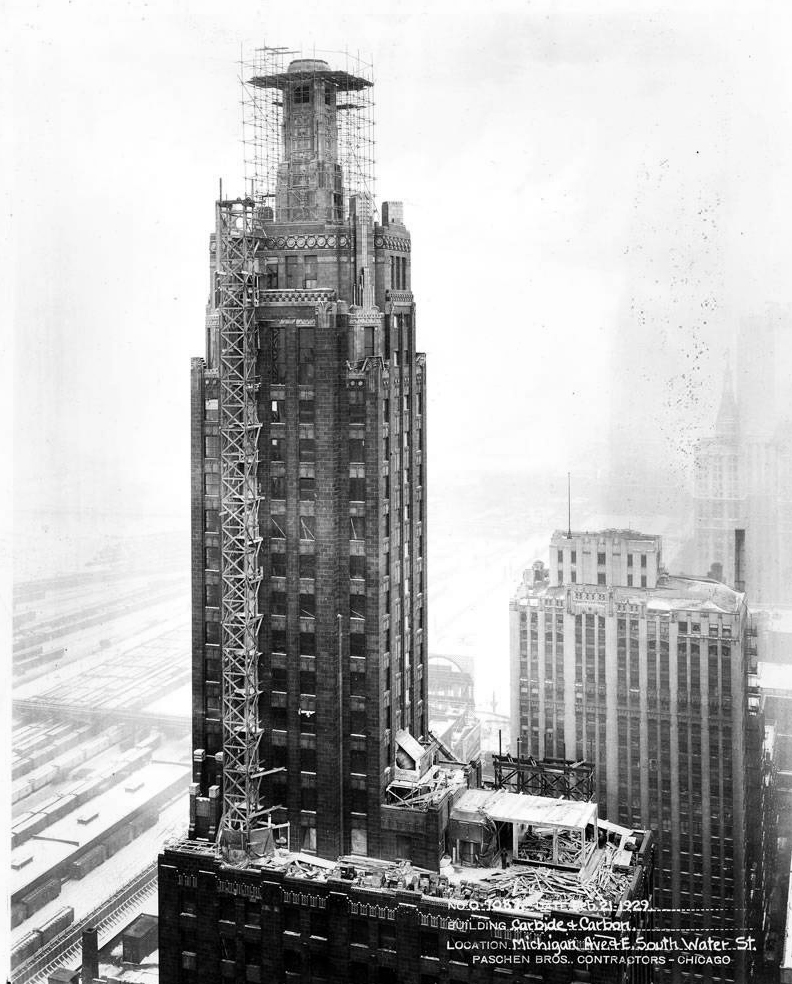 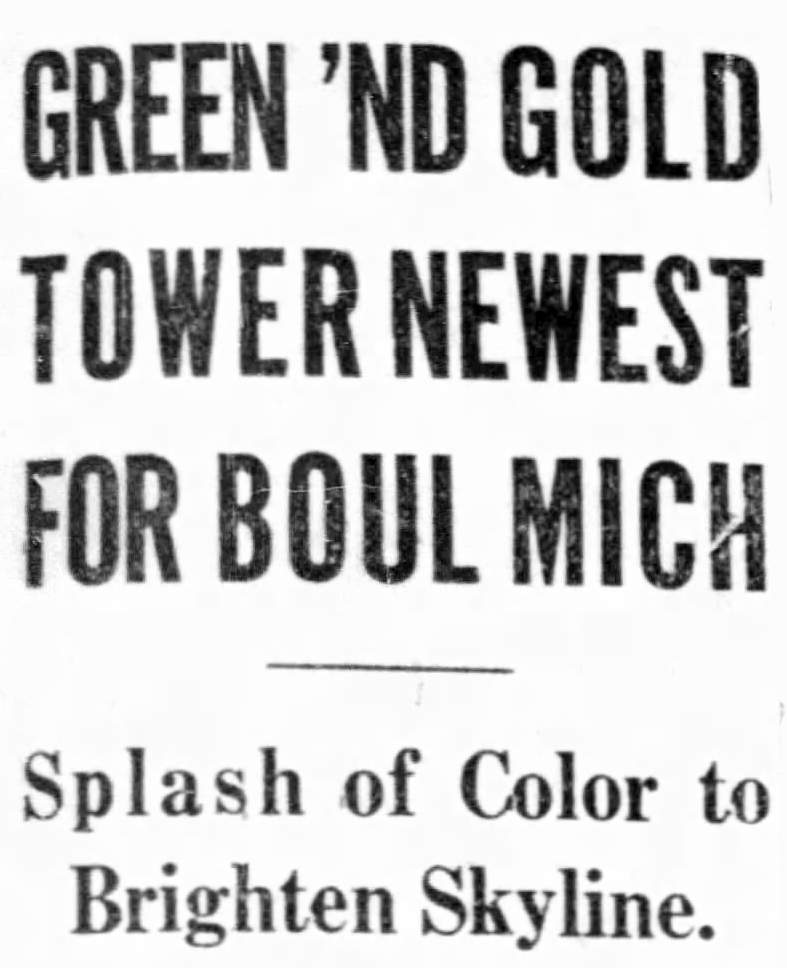 Nearly a year and a half ago, on Jan. 30, 1927, to be exact, this department printed a story and picture pf a twenty-nine story office building to be erected at the southwest corner of Michigan and East South Water street by Henry Paschen of Paschen Bros. Since that time owners, architects, and the height of the project have changed.

Daniel A. Coffey and Alexander F. McKeown have acquired the leasehold from Mr. Paschen, and are having plans completed by D. H. Burnham & Co. for a forty story structure.

The Union Carbide and Carbon corporation is not to move its general offices from New York and occupy the new Boul Mich tower, as was announced by a morning paper last week. The Oxweld Acetylene company and other subsidiaries, however, are to occupy ten floors for offices and a ground floor store for display purposes. For this reason the structure is to be known as the “Carbide and Carbon building.”

Work to Start at Once.
The Carbide tower will represent a total investment reported to be approximately $4,750,000. The Greenebaum Sons Investment company has underwritten a $3,400,000 first mortgage bond issue at 6 per cent. Construction is set to start at once, with completion set for April 1, 1929.

Although color is fast becoming an important factor in the sale of most American products, owners and architects have overlooked to a noticeable extent its use in buildings. The Carbide tower, however, will be an exception, for D. H. Burnham & Co. have designed a structure to be entirely in green and gold, with a black base. It will be 508 feet above sidewalk level, it is claimed.

To Be in Green and Gold
The exterior walls will be of the same materials on all sides. The first three stories will be of highly polished black granite; the balance of the building will be faced with dark green terra cotta, with various lighter shades worked into the design. Gold faced terra cotta will be interpolated with the green to emphasize certain decorative features. These will be flood-lighted.

The lobby will be two stories high, with marble floors and walls and with ceiling of ornamental plaster in colors. Typical corridors will have marble wainscoting; all wood trim throughout will be of American walnut. The entire first basement will be used for automobile storage, with a capacity of forty cars.

The Carbide and Carbon Building belongs to this tradition which is perpetuated today by edifices such as the Sears and Quaker towers. The company openly acknowledged this, saying in a 1932 promotional piece:

Visible by day from most parts of mid-town Chicago and flood lighted at night, the Carbide and Carbon tower serves as a distinctive and perpetual advertisement for its occupants.

As further proof that the building would remain synonymous with the integrity of the company, the brochure went on to say:

oth the resources of this organization and its natural interest in maintaining a building worthy of housing its own Units are positive assurance that the reputation, appointments, and servicing of the building will always remain on their present high plane. 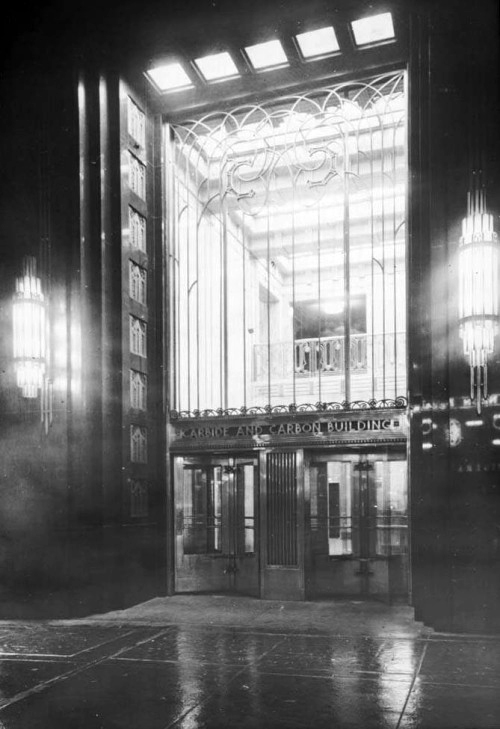 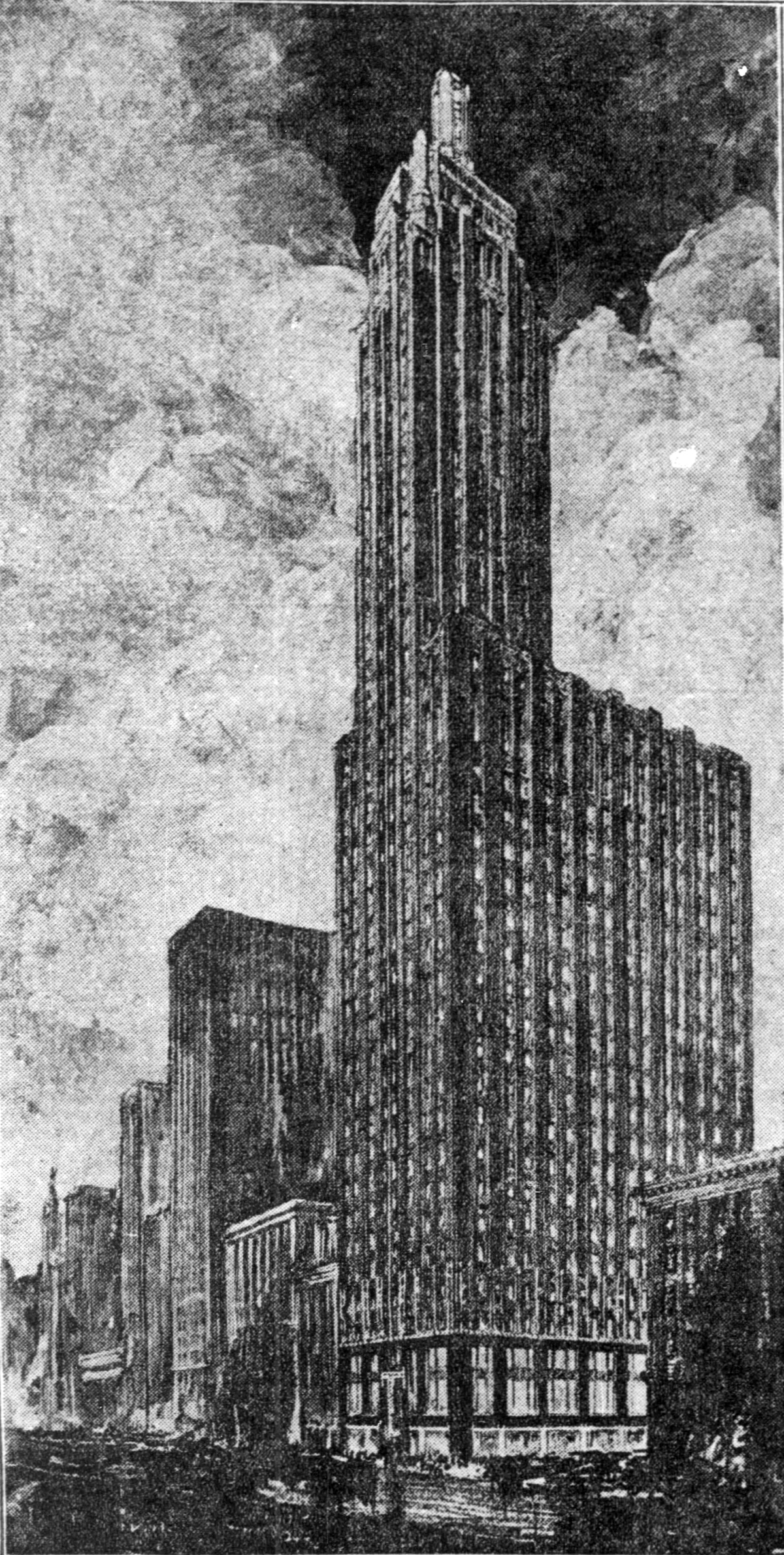 The forty story skyscraper shown is to be Chicago’s first experiment on a big scale with the free use of color architecture—something New York and other eastern cities have been doing for some time. It’s to be a green and gold shaft, with the gold parts flood lighted at night, and is to be erected, as originally announced more than a year ago, at the southwest corner of Michigan and South Water, from plans by D. H. Burnham & Co. Charles Morgan made this picture. 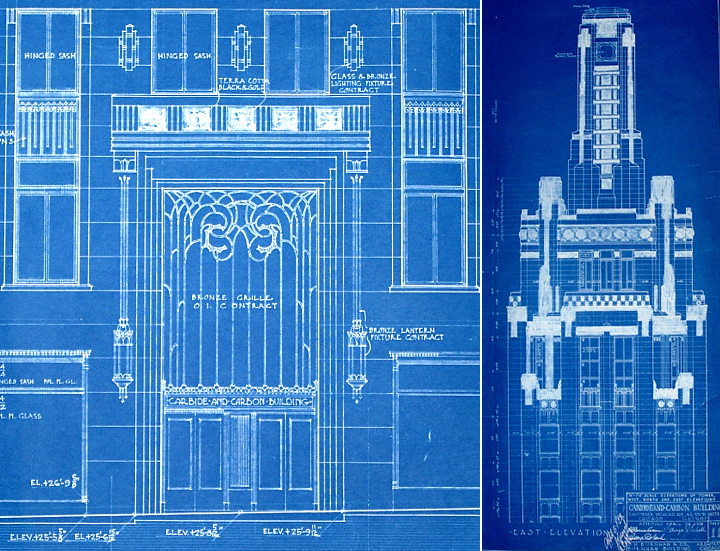 Carbon and Carbide Building blueprints iof the tower and entrance, 1928. 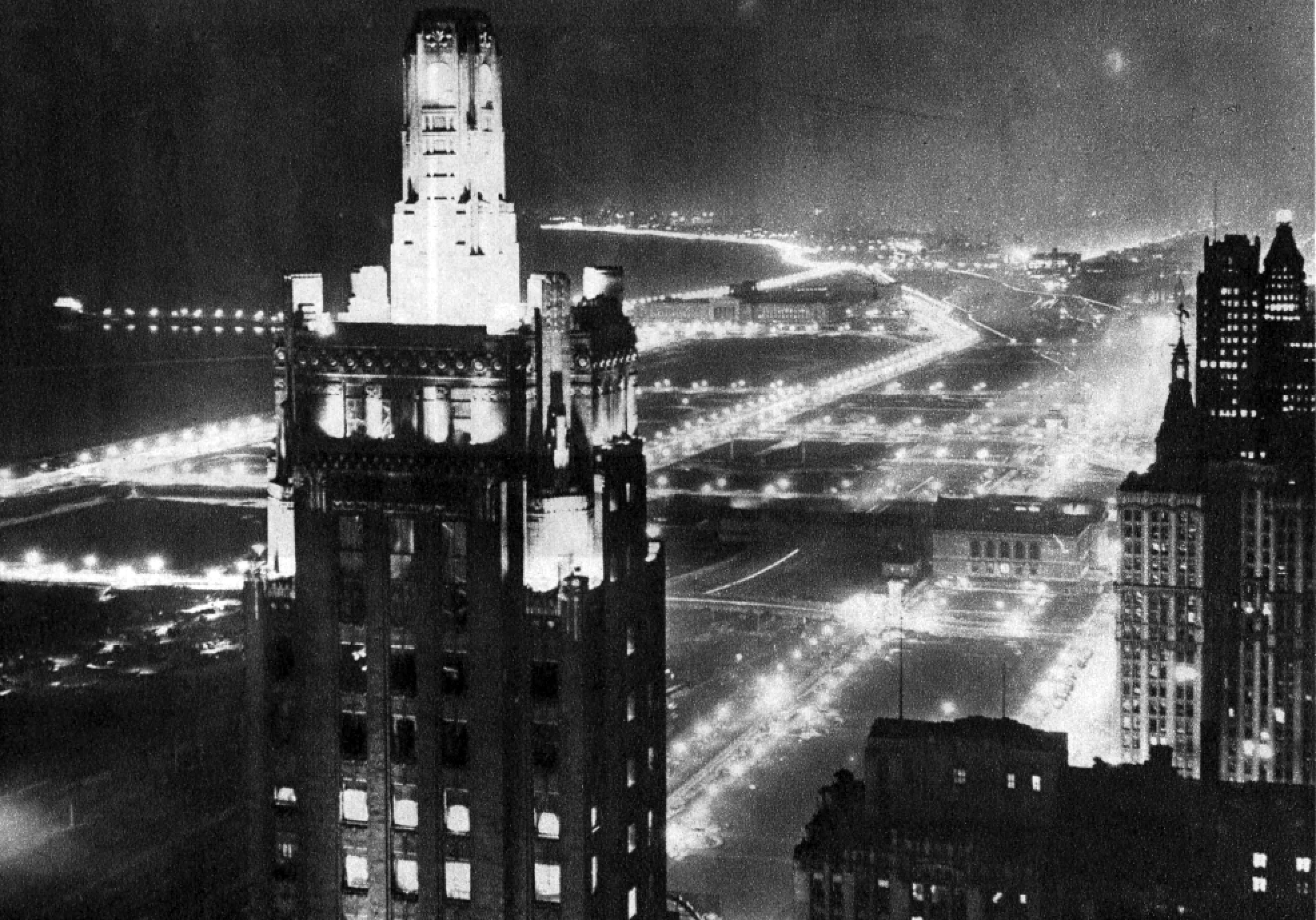