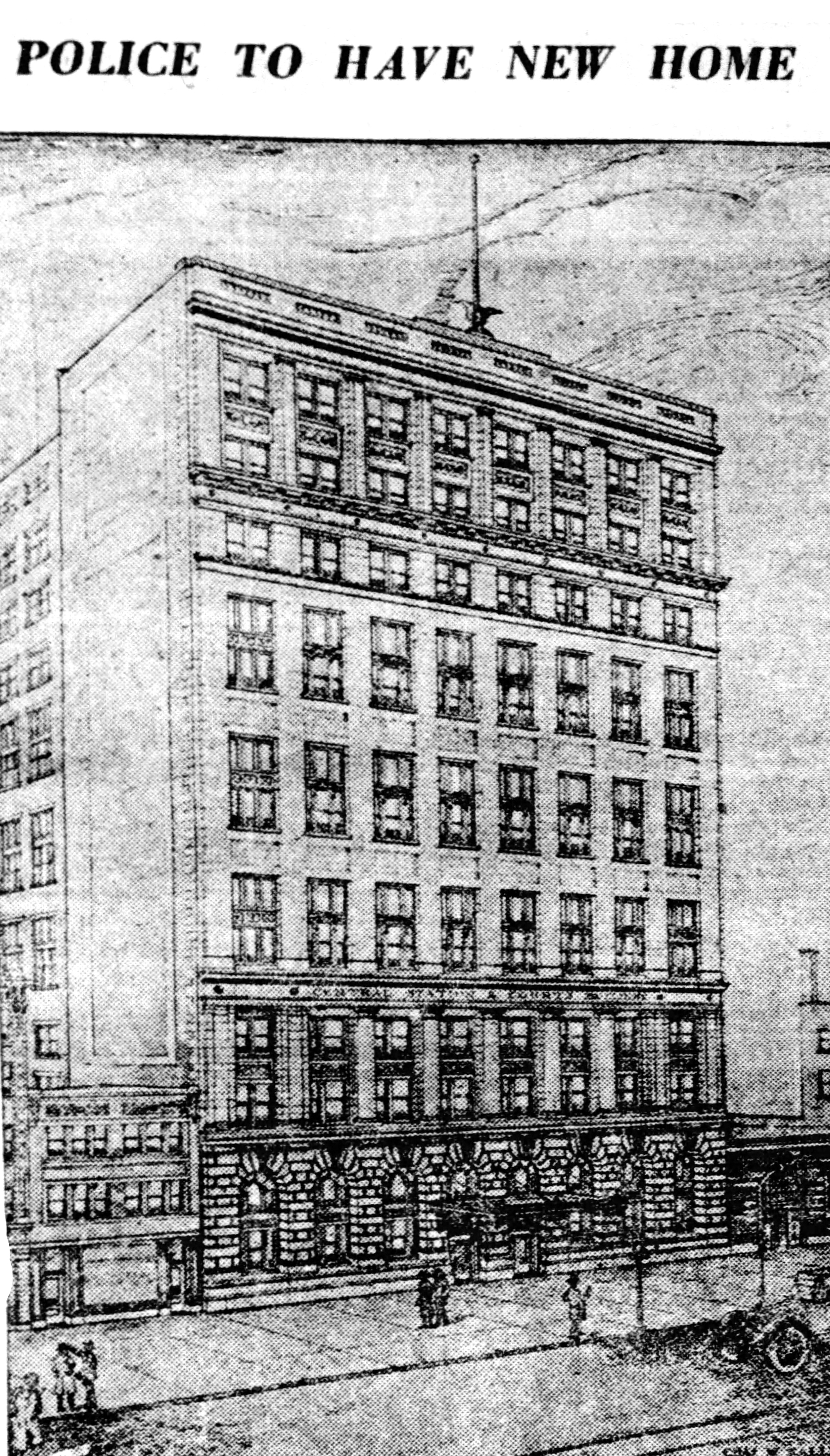 Excavation for the new police headquarters and Municipal Court building at State and 11th streets probably will be started soon after Dec. 1, according to Mayor Dever and Commissioner of Public Works A. A. Sprague. Neither official believe there will be any difficulty in financing the building, which will cost a little more than $1,000,000.

Lease on the old mounted police barns, which now occupy the site, expire on Dec. 1, and more than $500,000 remains unused from a bond issue authorized several years ago for new police stations.

The nine story building, plans for which were completed yesterday by City Architect Charles W. Kallal, is designed to house the detective bureau, the First precinct station, and twelve Municipal court branches, in addition to many other phases of police activity. It will replace the present South Clark street station building, which, with other loop police quarters, was recently declared insanitary by Health Commissioner Bundesen.

After a period of study and planning the City of Chicago. is about to centralize its downtown police activities in a modern central police station and court building to be located at 1121-1131 S. State Street.

On January 30, 1925, the City Council passed an ordinance for the issuance of bonds to the amount of $2,500,000.00 to cover the erection of a modern central pollce statIon. This ordinance was approved by a referendum vote of the people on February 24, 1925. 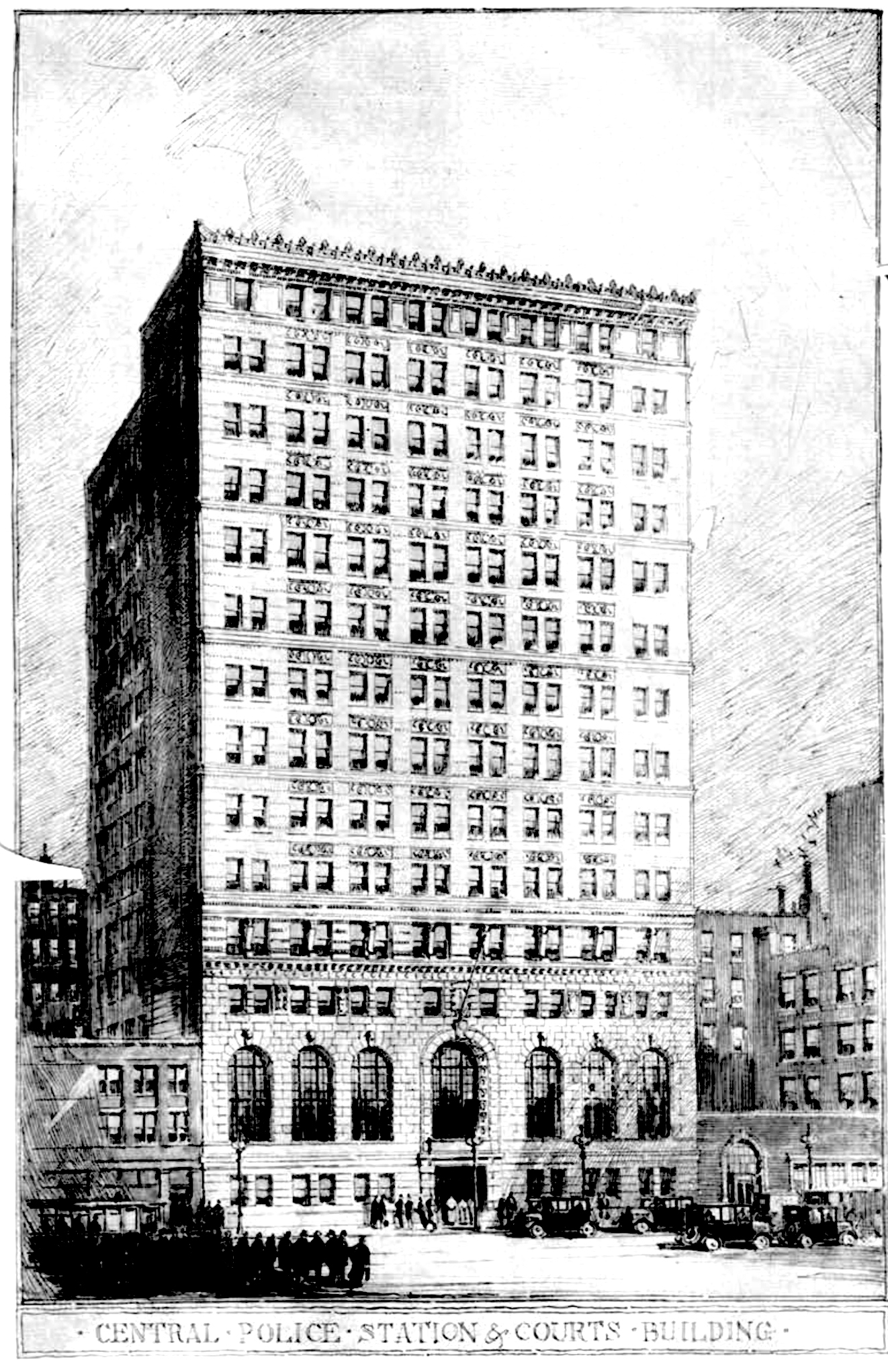 The planning and engineering work, done after much study of the needs of the pollce department, was under the direction of Col. A. A. Sprague, Commissioner of Public Works. He will also direct the actual construction work.

The building is designed for purely police activities and space for several court rooms has been provided. It will be fifteen stories in height. The exterior will be cut stone to the fifth floor and face brick of a light buff color from there on up to the cornice line. The entrance lobby will be of cut marble.

A covered concourse, for the reception of prisoners, has been planned as a part of the building so that the unloading of prisoners from patrols, etc., can be done out of public view and protected from the elements. This plan will make it possible to handle the daily grist of prisoners safely and efficiently, cell room being provided immediately adjoining this concourse for the temporary retention of prisoners from where they will be taken by special elevators to their various destinations.

The needs of each police activity have been anticipated in the plan of the new building, which will house all downtown activities of the Police Department, including such units as the Detective Bureau and its various sections, Drillmaster, Vehicle Bureau, Police Custodian, Bureau of Records, Identification Bureau, etc.

Offices for the Superintendent, Deputies, Secretary, Inspector of Personnel, Manager of Properties, etc., are provided for.

Court rooms for the Domestic Relations, Boys’ and Speeders’ Courts are included in the upper floor plans.

The engineering and architectural work has been completed and actual construction started. Sinking of the caissons has begun and according to the present plans it is contemplated to have the Central Police Station and Court Building completed some time in the Fall of 1927. 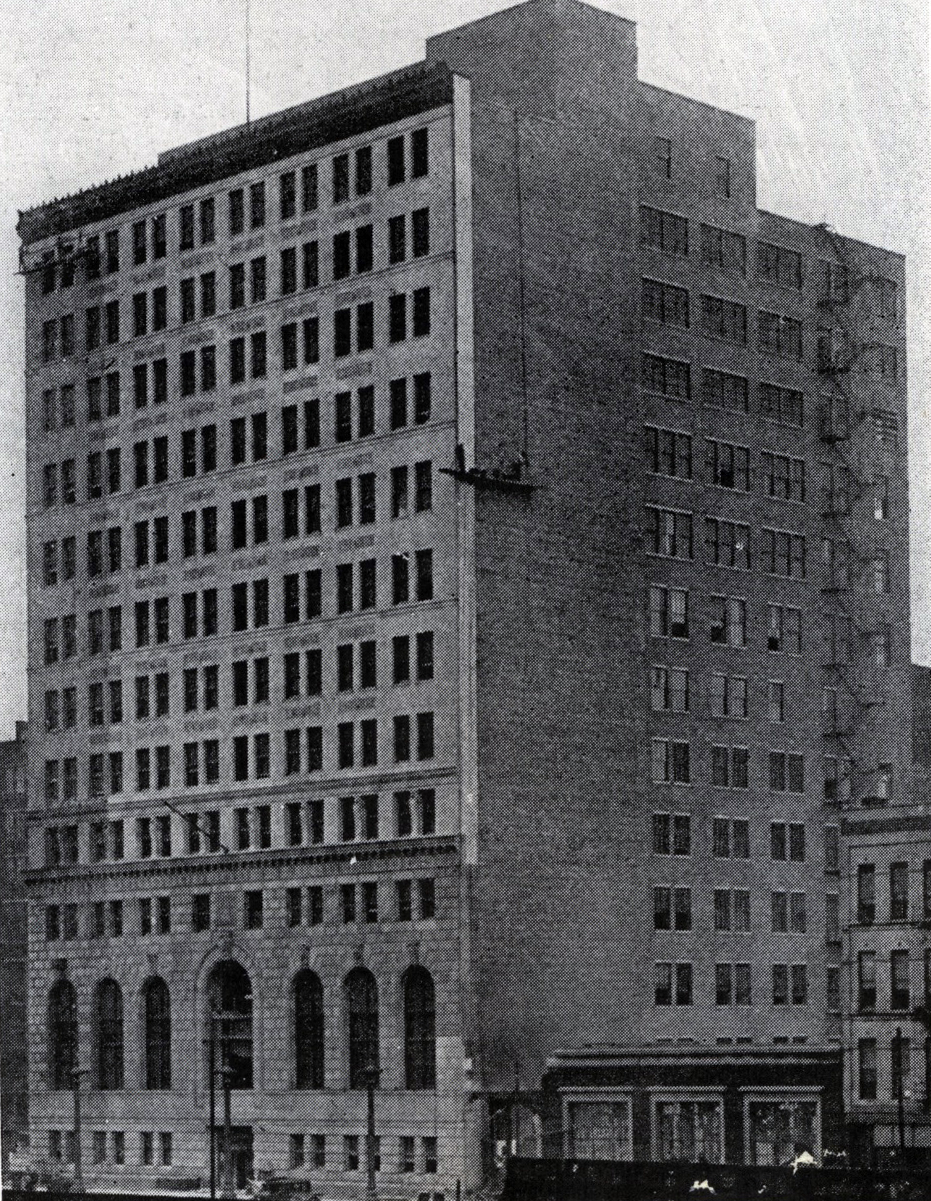 The new 13-story Chicago Police Headquarters at 11th and State 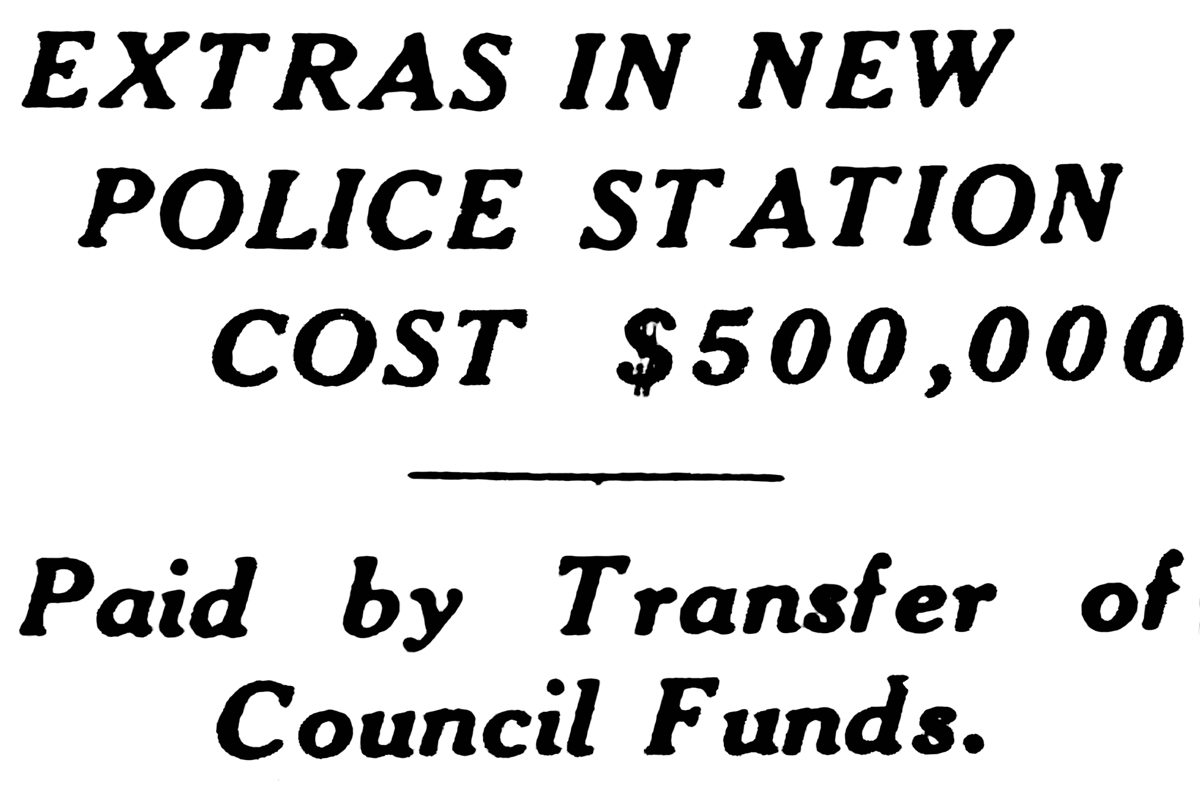 Due to changes in plans, the new Police and Courts building at 11th and State streets, to be occupied next week, has cost the city more than a half million dollars in “extras,” it was disclosed yesterday.

A $2,500,000 bond issue for constructing the new building was voted in February, 1925. Estimates then were that this would be ample to complete and equip the structure on the original contracts, totaling $2,278,949. However, a report from the council finance committee staff yesterday showed an “extra” $595,144 to have been spent.

“When former Police Commissioner Michael Hughes took office he decided that the plans approved by his predecessor, Morgan A. Collins, should be altered,” explained Ald. John Clark (30th), chairman of the committee. “We had to shift some offices around, enlarge some, and reduce others. Each of these changes added ‘extra’ items to the bill. The finance committee objected, but there was nothing to do but pay. We paid.”

From One Fund to Another.
In paying, the aldermen took the money needed from another bond fund, that which was voted for police stations in the outlying stations, a total of $379,679, and spent it on the loop building. The staff’s tabulation shows how the building’s finances were handled:

Two years of construction obstacle-course running is about over. The tremendous remodelling project of central headquarters will be completed, with the exception of a few offices, by the 5th of March.

On 5 March, 1963, at 1130 hours, Mayor Richard J. Daley, Superintendent O. W. Wilson, and General Franklin M. Kreml, President of the Police Board, will officially dedicate the renovated building. In a brief ceremony before city dignitaries and well-wishing Chicago citizens, Superintendent Wilson will review the project and will publicly acknowledge the many people and companies that worked on this huge undertaking.

From the old C.C. room on the 12th floor to the new Communication Center; quite a difference!

Although the dedication ceremony officially opens the new headquarters, many Chicagoans have already been introduced, over the past six months, to the new facilities. Many sections of the building (such as the Communication Center, the Data Processing Section, the Crime Detection Laboratory, and the Recording and Transcribing Section) were constructed in such a way as to make the viewing of their operations open to the public. During the last half year, guided tours have been conducted to these “show” areas, as well as other sections of interest, as each was completed.

For those who have not yet had an opportunity to see the changed headquarters, an Open House is being arranged for the Saturday and Sunday following the dedication. On the week-end of the 9th, persons who wish to view the new facilities are invited to come down to 1111-1121 S. State for a guided tour of the building. Tours will be held, on a continuous basis, on the two days of the week-end, from 1400 to 2100 hours.

The project to modernize central headquarters stretched over two years. Those who worked in the building during the construction had to do so through the pounding .of air hammers, the clouds of plaster dust, and the tangle of boards and sawhorses on every floor. Officers who visited the building remember hunting for dislocated offices and climbing around paint buckets and temporary partitions. But the “pains” of modernization were well worth it.

Before and After pictures of the Crime Laboratory.

Construction took place in three phases. Phase I, beginning in April, 1961, consisted of alterations made to the second floor of the main building to accommodate the new Communication Center, the administrative switchboard, and the Data Processing section.

In Phase II, the former garage on the corner of 11th and State was converted into a modern office building; and a connecting building joined the corner structure with the main headquarters. This new structure, now the north wing of headquarters, houses Central District station (first floor, rear) , three Records sections, the Graphic Arts section, the Crime Detection Laboratory, as well as other offices.

Phase III, started January 1962, is now almost complete. This work invDlved the renovation of the main floor and floors three through six; the refinishing of the exterior of the building; and the installation of automatic elevators (not yet completed).

In addition, modernization continues on higher floors, to make room for other Department units. The 7th floor has been repainted and furnished with new lights and furniture to accommodate the Youth division; and parts of the 8th, 12th and 13th floors will be renovated to house certain divisions of the Bureau of Inspectional Services.

Before and After pictures of the new quarters. The Department has added a dimension of self respectt in acquiring these modern, clean, well lighted quarters.

Chicago’s police headquarters at 11th and State Streets will be torn down and a new headquarters will be built on the West Side to create a campus of law-enforcement facilities, Mayor Richard Daley said Wednesday.

The mayor made the announcement at the current headquarters after he and Gov. Jim Edgar were forced to wait several minutes for an elevator before they arrived at a news conference to re-affirm their commitment to crime fighting. 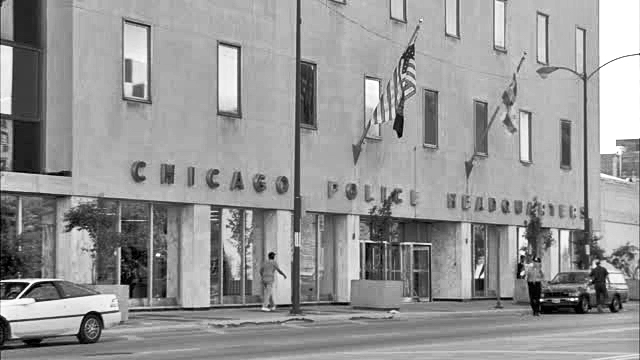 But shaky elevator service wasn’t the reason the mayor decided to make the switch. He said he’s been planning the move since he was first elected in 1989. The old building, built in 1930, is antiquated. The plumbing doesn’t work well and the wiring is going bad, Daley and police officials said.

Daley also congratulated the governor for building a new state police crime lab in Chicago, and Edgar offered support for Daley’s crime legislation as part of a continued push by the politicians to portray themselves as crime fighters heading into their respective re-election campaigns.

The mayor said the administration is already planning the new headquarters, which will be built beginning next year. He said he wants to put it next to his new $213 million 911 emergency communications center at Madison and Loomis Streets and use property-tax-backed general obligation bonds to finance it.

That area also includes the police academy, the site of the new state forensics lab and a possible site for a new state police training center.

“I really believe they need a new facility,” Daley said when asked why the headquarters should be replaced. “And also with a new facility, we’ll be looking at the training center to do a lot of things for the new cadets. . . . This is a very old building. The Chicago Police Department deserves a new, state-of-the-art building.”

The existing 13-story structure has housed an unlikely combination of police administrators and accused criminals. Its antiquated courtrooms draw a motley crew of suspected car thieves and prostitutes, while two floors below, detectives keep track of the latest murders.

Some of the procedures and equipment that rattle around headquarters seem stranded in another era. In a sixth-floor office, officers type out “The Sheet,” a chronological list of major crimes. The communications center on the second and third floors, with its flashing lights, once was considered the best that technologycould deliver. Today, it is barely adequate.

Despite its rundown condition, 11th and State, as it is known, is the hub of police activity.

The 1st Police District, which is also housed in the headquarters building, will remain in the area.

The formal reason for the news conference was so Edgar could present Daley with a $9 million check, representing the savings for City Hall in 1994 now that the state will build a crime lab facility here to provide the same service to Chicago that it does throughout Illinois.