The Essanay building in Chicago was later taken over by independent producer Norman Wilding, who made 16mm industrial films. Wilding’s tenancy was much longer than Essanay’s. In the early 1970s a portion of the studio was offered to Columbia College (Chicago) for a dollar but the offer lapsed without action. Then it was given to a non-profit television corporation which sold it. One tenant was the midwest office of Technicolor. 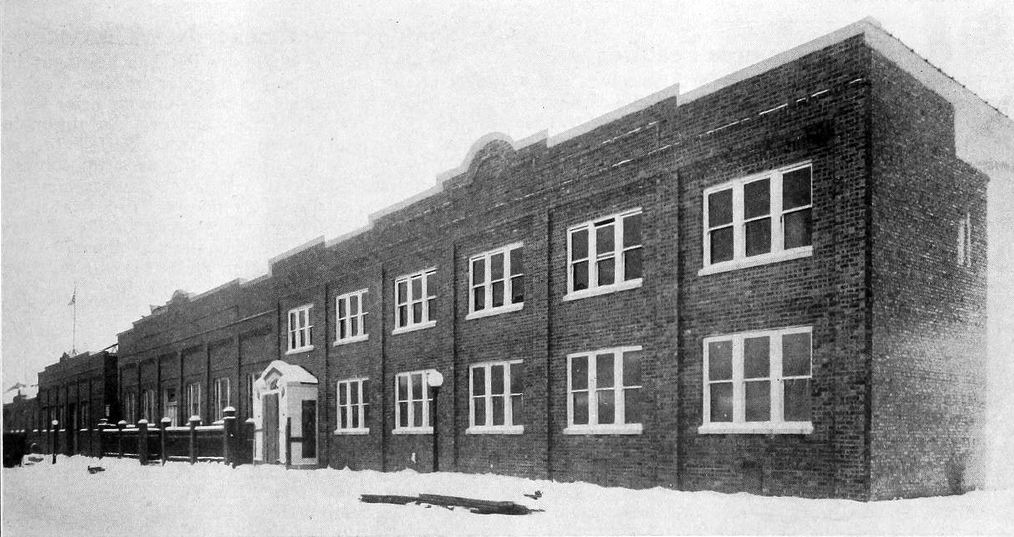 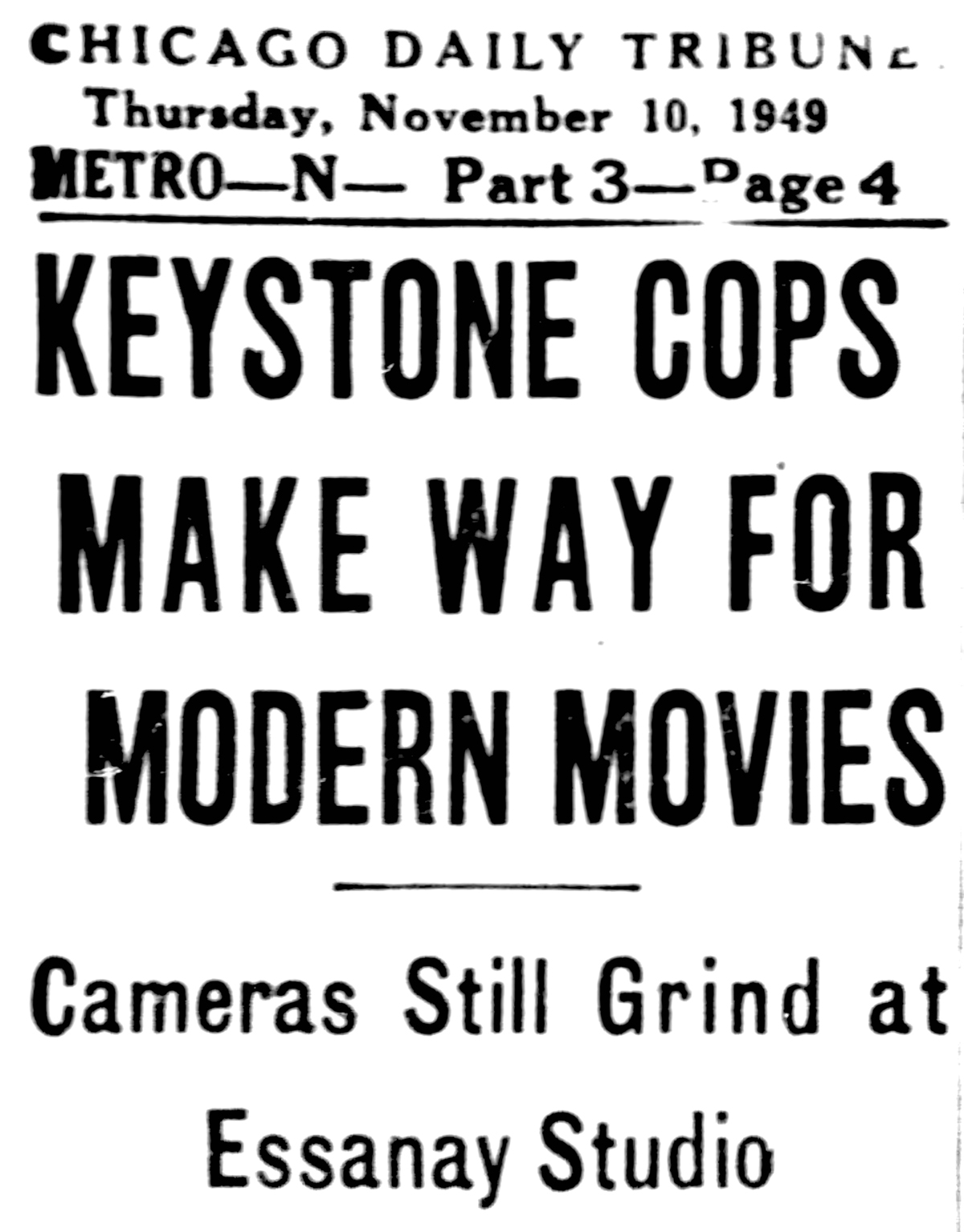 BY LEIGH ATKINSON
There’s many a north sider who ean recall seeing a bunch of Keystone cops from the old Essanay studio hop out of a paddy wagon on Broadway and toss soft pies about to the delight of passers-by and a director and grinding cameraman.

There are some who remember watching cattle thieves get chased by a sherif and Civil war armies marching-all on the plains of Budlong woods. And there are a few who can talk about goings on inside one of America’s first movie studios at 1345 Argyle st. and recall watch- ing such stars as “Bronco Billy” Anderson. Gloria Swanson, Wallace Beery, Charlie Chaplin, Ben Turpin, Francis X. Bushman and Edward Arnold perform on Its stages.

It is doubtful, however, that who remember the days when Chicago was the film capital of the world are aware that cameras still grind in the old studio and that many favorite stars of the present day screen make pictures there.

Advertising Films Better
Essanay studio has been the Chicago home of Wilding Picture Pro ductions, Inc., since 1937 and is today one of the biggest motion picture plants outside of Hollywood in the United States. Wilding makes commercial films.

Industries have developed a new school of thought in the fields of and public relations. For instance, if a company some years ago wanted to popularize its name thru a film it usually plugged its product thruout.

For good will purposes a number of industries and firms today are making films which tell stories that bave a moral or historical theme. Advertising in these pictures is often limited to an announcement at the end which states that “this film is a public service sponsored by—.”

Can Duplicate Any Action
Because of the tremendous power needed for operations, the firm has its own powerhouse as well as two generator trucks used to supply elec- tricity to units working on location.

One of Wilding’s most important pieces of equipment is a new $22,000 rear screen process projector and a 26 foot rear projection screen. This equipment and a large mirror permits the company to film almost any kind of action-from a storm at sea to chopping down trees in the north woods-all inside the studio on Argyle st.

Here’s how it’s done. A tobacco company wants a television commercial on film. It wants the picture to show a commentator standing in a tobacco warehouse holding and describing leaves of tobacco. It wants action in the background—workmen moving about.

Wilding sends a crew to a south- ern state where scenes inside a warehouse are filmed. This film is projected from the rear screen projector to the mirror which reflects the image to the screen. The actor stands in front of the screen with the tobacco leaf in hand. Cameras record the actor and the screen and in the finished picture it appears the actor is standing in the warehouse.

President of the corporation which makes sound slide films as well as motion pictures is C. H. Bradfield Jr., who has been head of the firm since the death of the founder, Nor- man E. Wilding. in 1946. Executive vice president is H. Fish. Scene of the modest beginning in 1914 of the corporation which now has studios and offices in a number of cities was Grand Rapids. Mich. 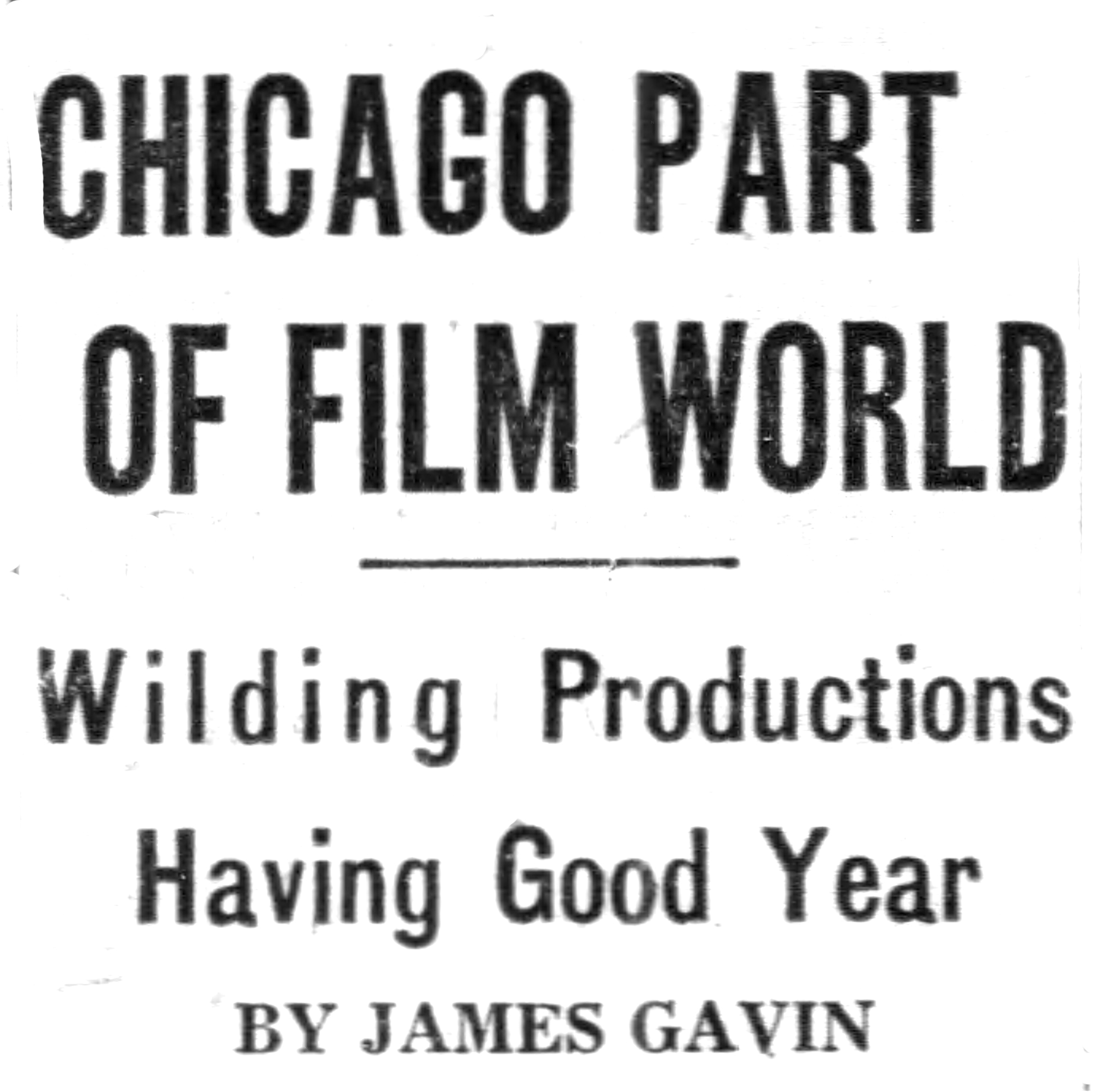 The motion picture business is doing all right in Chicago.

Evidence of this may be obtained in the 1958 production schedule of Wilding Picture Productions, Inc., one of the world s largest producers of industrial films.

Wilding estimated it will produce 100 to 125 major business films before year-end. Its output. will be part of some 5,000 such films that the 500 to 600 industrial movie producers thruout the country out this year.

Cost at 130 Millions
The over-all cost of this output will be about 130 million dollars which is only 2 million dollars less than the peak year of 1957 and despite the current business recession.

Probably it s only fitting that Chicago get some recognition in tha movie industry because it was once the world’s film capital.

Some old-timers are around who will say they remember seeing Keystone cops scurry from a paddy wagon on Broadway and toss pies.

Such slap stick productions were made by the old Essanay studio, 1345 Argyle st., which has been Wilding’s home base since 1937. Stars such as “Bronco Billy” Anderson, Gloria Swanson, Wallace Beery, Charlie Chaplin, Ben Turpin, Francis X. Bushman, and Edward Arnold performed on the studio’s sets. 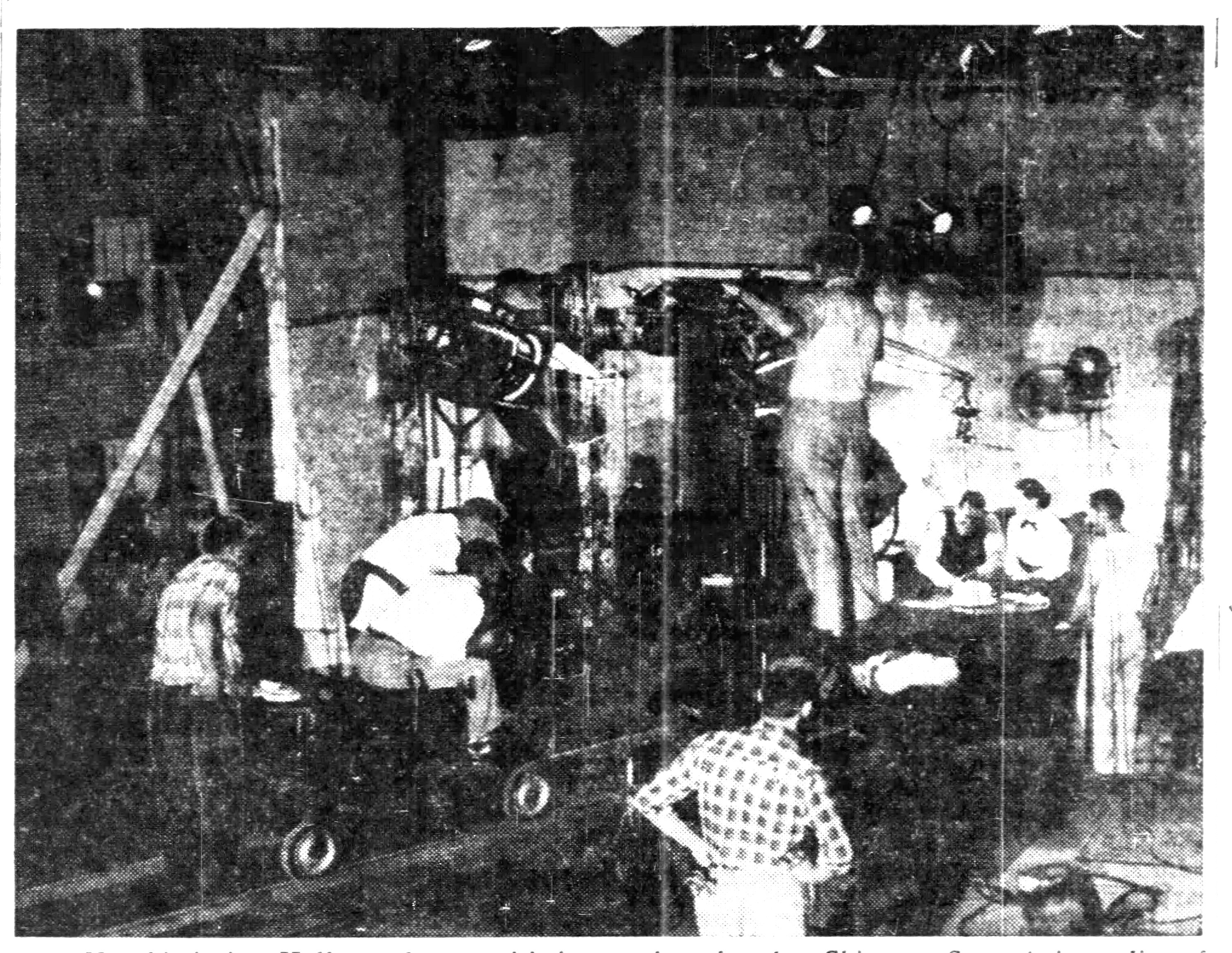 No, this isn’t a Hollywood scene; it’s in no other place but Chicago. Scene is in studios of Wilding Picture Productions, Inc., on Chicago’s north side. Wilding this year will produce 100 to 125 films for businesses, the company said.

3 Movie Sound Sets
The 2½ acre location provides floor space of 60,000 square feet including three motion picture sound stages. On these stages films have been produced for some of the giants of industry.

A recent survey by Wilding concluded that the of industrial films may triple that 130 dollar figure by 1960.

Since 1954 the industry’s volume has doubled and a large part of the increasing use by industry is attributed to the successful use of film in World War II to train men in the armed services.

Cover Many Subjects
Industrial films cover a wide range of subjects, from expounding proper use of the company’s products (aimed at salesmen to aid their sales pitch) to productivity (to get management’s rising costs problems before employees).

Another growing aspect of Wilding’s business lately has been its industrial shows which travel the country and introduce company products.

For decades, Wilding was the MGM of concept-to-completion industrial films, a.k.a. sales and training “trips through the factory,” producer of extravagant live sales meetings, and later commercials, for Chicago’s manufacturing economy.

It was a badge of honor to work at Wilding, to be part of the city’s biggest but tightly-knit permanent staff that worked out of a two-story, three building complex with three sound stages, editorial offices, its own equipment, carpentry shop, prop room and set storage, screening rooms and more.

It was where local film unions were born and the genesis of future generations of film workers. Local 476’s Mark Hogan’s grandfather worked at the original Essanay Studios and his father at Wilding.

Wilding’s ultimate end in 1972, coinciding with the disappearance of manufacturing and film technology that changed the industry, took several twists and turns. Local projector manufacturer Bell & Howell bought Wilding for a reported tax write-off, one veteran filmmaker recalls, and closed the studio before the year ended. Bell & Howell donated the real estate to Ch. 11, which in turn sold the property.

Miss Wilma Shuesler, Ralph Biddy, and Howard Adams, of Wilding Picture Productions, 1345 Argyle street were killed on September 20, 1937 when the airplane from which they were taking motion pictures of the Burlington railroad s streamliner, the Zephyr, crashed when it was caught in the air stream of the train speed- 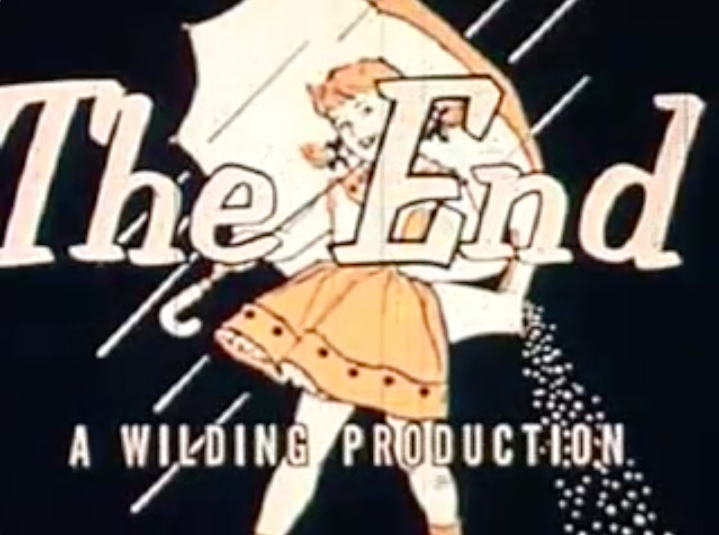