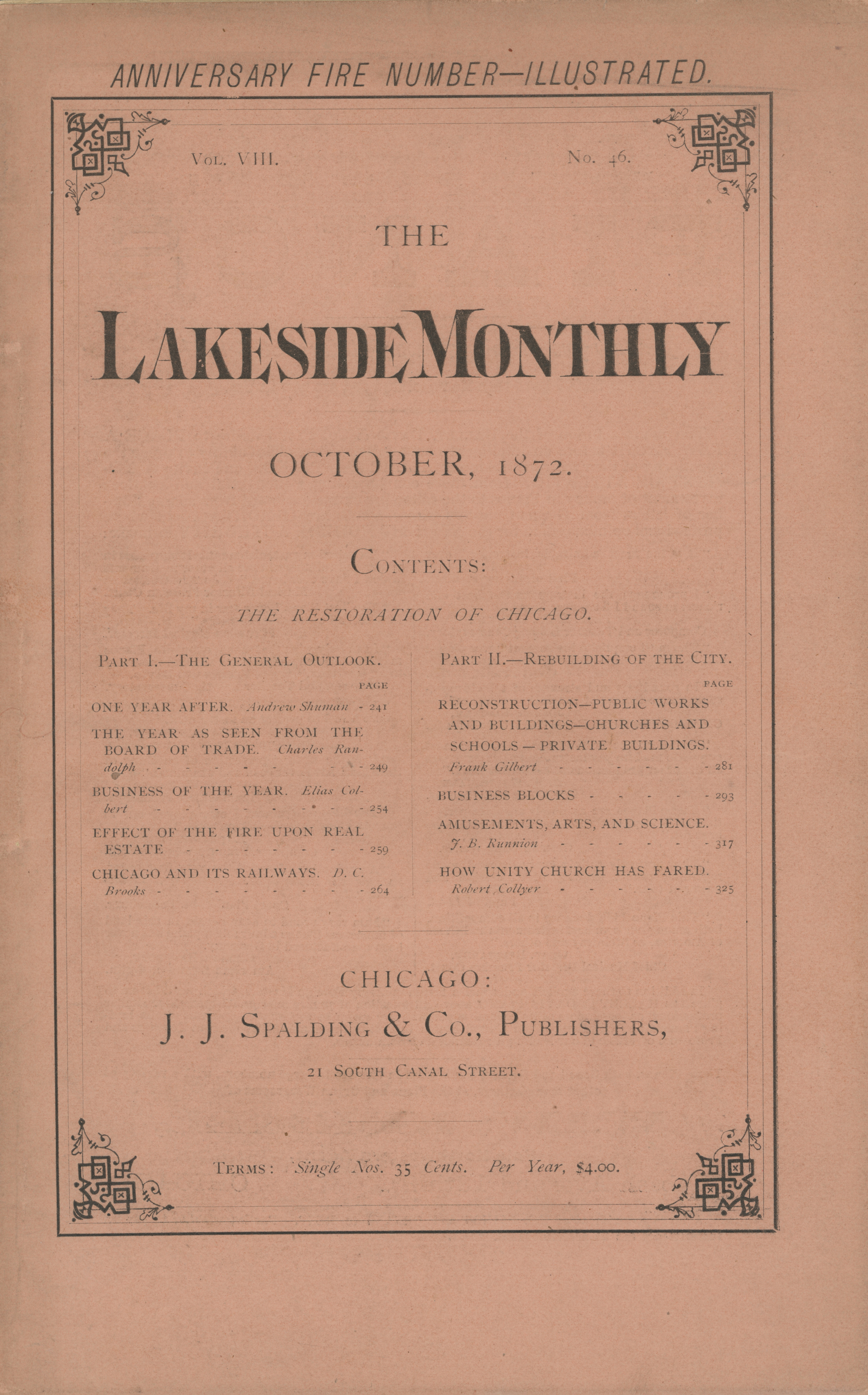 PRIVATE BUILDINGS..
None of the buildings thus far mentioned, except incidentally, are sources of revenue. They are, rather, bills of expense, put up for the benefit of the public, and not of individuals. From the descriptions of private buildings which accompany the illustrations, one may form some idea of what has been and is being done. But nothing like an adequate conception can be formed. With few exceptions, the cut fails to do justice to the reality.

The area of business has been greatly enlarged. The mile or so on Canal street, in the West Division, where the fire originated, was largely given up to miserable rookeries before; while now it has a great deal of heavy business, a large part of which will probably remain there permanently. In the South Division, while many residences were destroyed, none are rising in their places. The entire burnt district on the South Side is given up to business, thus enlarging the business territory of the principal portion of the city nearly one-third. In what was formerly the business part of town, at least three-fourths of the ground is built up or is being so.

With two or three exceptions, the structures are creditable, and very many of them superb. The block on State street, between Washington and Madison, for instance, is far superior to any building we had before the fire, and yields the palm to none on the continent. LaSalle street was noted for its magnificent office buildings, and after the fire the remark was common that Chicago would never see their like again. But rebuilt LaSalle is looming up grander than ever. The new Chamber of Commerce is a much finer structure every way than the old one was, and the bank and insurance palaces skirting that thoroughfare are, or will be, proportionately better than their predecessors. The new hotels will improve upon the old to a still greater extent. Neither the Sherman nor the Tremont had the capacity of the hotel at the Union Stock Yards, just south of the city limits, a house filled the year round with cattle dealers. Numerous as were our hotels, they were not equal to the demand. There is no city in the country which has so large a proportionate transient population. Midway of the continent, with a vast network of railroads, nearly everybody passes through Chicago “going West” or “going East,” as the phrases are. There is no danger, however, of a paucity of public houses in the future. The cost of the Pacific Hotel has been more than made up by the resultant appreciation of adjacent real estate. A first-class hotel thus serves a double purpose, much to the benefit of the general public. 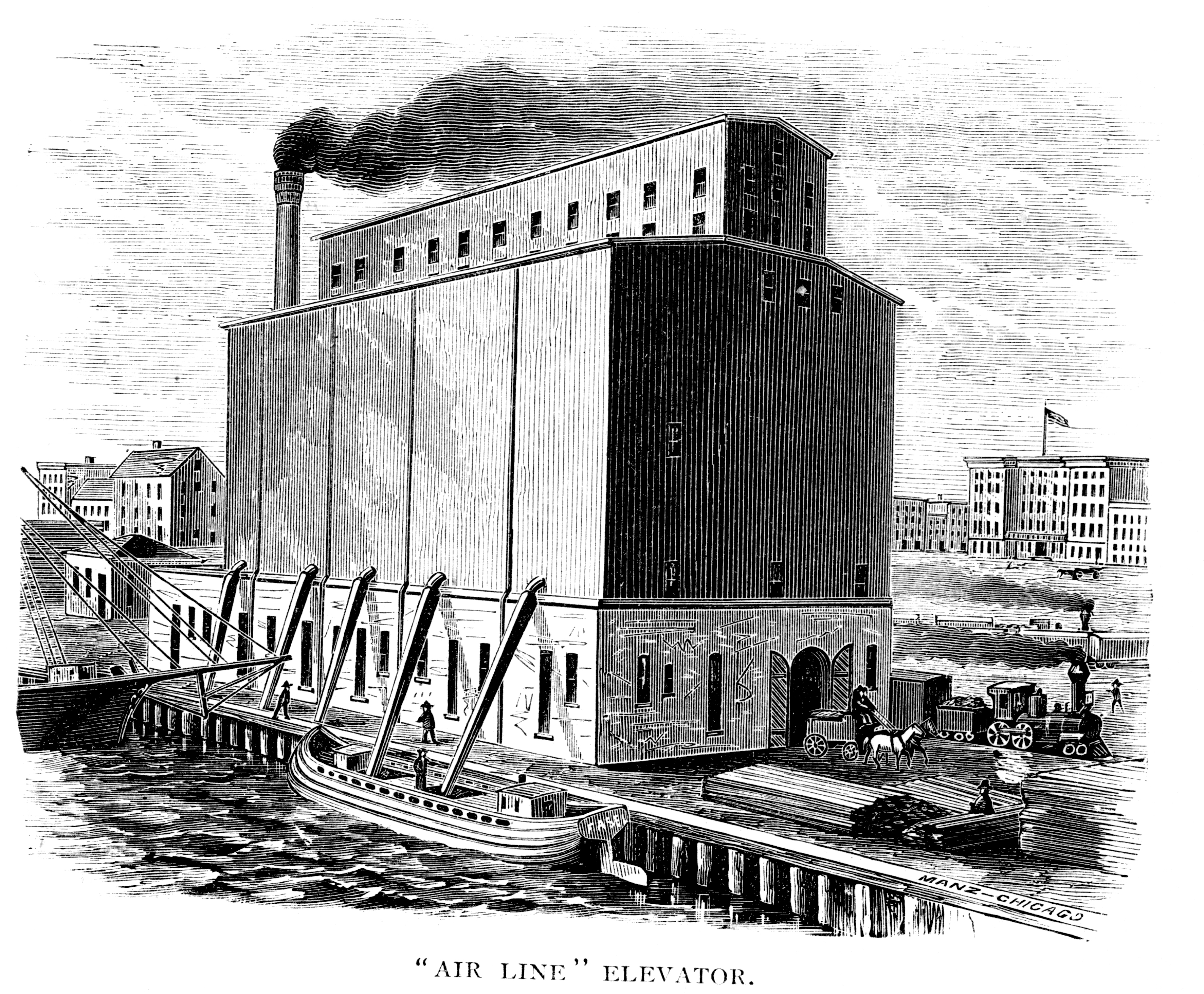 The elevators or grain warehouses destroyed were the Central, A.; Munger & Armour’s; the Galena; the National; Hiram Wheeler’s, and Lunt’s. Their aggregate capacity was 2,475,000 bushels. Those not destroyed have a capacity of 8,900,000 bushels. All those destroyed, except the last named, which had only a capacity of 75,000 bushels, are being rebuilt. Some have already been completed; all soon will be. The capacity of the new elevators will be considerably greater than that of the old ones. Besides, an entirely new enterprise in the warehouse line is fast approaching completion—Hough’s elevator. The aggregate capacity of these new warehouses is 5,600,000 bushels, or 3,125,000 in excess of those destroyed. Others have been projected. The grain trade of Chicago is in creasing in proportion to the agricultural growth of the vast region of which this city is the commercial centre. We may as well add here that the “Air Line” Elevator, illustrated on page 276, is 72 feet by 273, and the bins are 50 feet deep. The height to the top of the cupola is no feet. The loading and unloading in all our elevators is done entirely by steam power, and the largest vessels can be filled in a few hours.

Chicago is destined to be as famous for her factories as for her commerce. The city is situated just right for it, especially for all kinds of iron-works, material and fuel being very cheap. The vessel taking grain to the East, can afford to bring back coal or iron at an exceedingly low rate. In this and other ways, mercantile and manufacturing enterprises are natural allies and concomitants. As yet, however, our manufacturing interests are in their infancy. The fire swept some of them away, for they were largely along the North Branch. Those destroyed have for the most part been replaced, with some important additions. As the buildings themselves are an exceedingly small part of the factories as a whole, a statement of the expenditures in this line would be of no value. It should be added that a very large per cent, of the manufacturing which really centres, in its capital and brains, in Chicago, is done outside of the city limits, where land is cheap, and the workmen can live at less expense, and exposure to temptation than in town. The railway system is work ing a great revolution in the residence habits of city people, by creating suburbs blending the advantages of town and country life. The railway system is working a hardly less marked revolution in the location of manufactures. New Chicago will soon rival Pittsburgh in her industrial thrift, without the intolerable nuisance of soot and smoke. Our new factories will, to a very large extent, be of Chicago, but not in. Chicago.

We have thus surveyed the “burnt district,” or the rebuilt district, as it ought rather to be called, from the standpoint indicated by the general title of this article. But before entering upon the details accompanying the illustrations of private buildings, two features of the residence part of burnt Chicago should be pointed out. That portion of the city had two sections, as distinct in condition as labor and cap ital.

While capitalists have been hard at work restoring the business portion of the burnt district, the laboring men whose homes were destroyed, lost no time in rebuilding. A vast area on the North Side, between North Dearborn street and the North Branch, was, forthe most part, dotted over with cottages. Had the water supply held out, this section of the North Division would have been saved, for the wind was favorable; but the structures being inflammable, and there being no means of protection, the fire took its course, leaving small dust piles to mark the site of former homes. In no other large city does so large a proportion of the laboring class enjoy the luxury of a homestead. Instead of huddling in loathsome tenements, our poor, to a very large extent, live in their own houses. Thousands of cottages were swept away on that awful Monday, and thousands have since been erected. The new houses are fac similes, almost, of the old. An effort was made to compel the use of brick in the rebuilding; but those Germans and Scandinavians, law-abiding in everything else, rebelled against the fire ordinance. One may go square after square in that section of the city and hardly see a single brick house.

It is a remarkable, yet not at all mysterious fact, that the oldest part of Chicago will be its youngest. The area between North Dearborn street on the west, Lincoln Park on the north, the lake on the east, and the river on the south, was the first to be built up, originally. It was there that “the old families” lived in elegant houses, with spacious ground. When the South Side was a swamp and the West Side a prairie, that section was a thriving city. The fire left only one house standing, and of the ground, nothing of beauty remains. Charred trees, which paid no heed to spring; a deso late conservatory with its glass uncracked, but its adjoining house an ash heap; and a plentiful growth of weeds, bear mournful testimony to the ravages of fire. With here and there a sickly exception, nothing has been done to restore that waste region, except a part of the business portion along the river’s edge. This does not betoken, as might be supposed, a lack of enterprise; on the contrary, it results from the judicious direction of enter prise. The men who lived in those houses did business across the river, and owned business blocks there. Thus far they have been bending every energy to restore the structures necessary to accommodate the business of the city. For the present they can do as Paul did, who lived in his “own hired house,” or join the great army of boarders. As soon as their business pro perty and rent rolls have been restored, they will, doubtless, turn their attention to residence building. That will be the second and final “departure” in the restoration of Chicago.